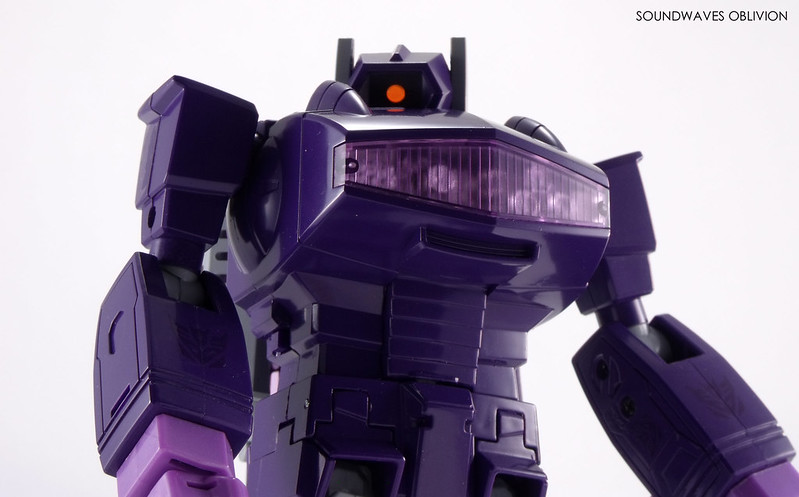 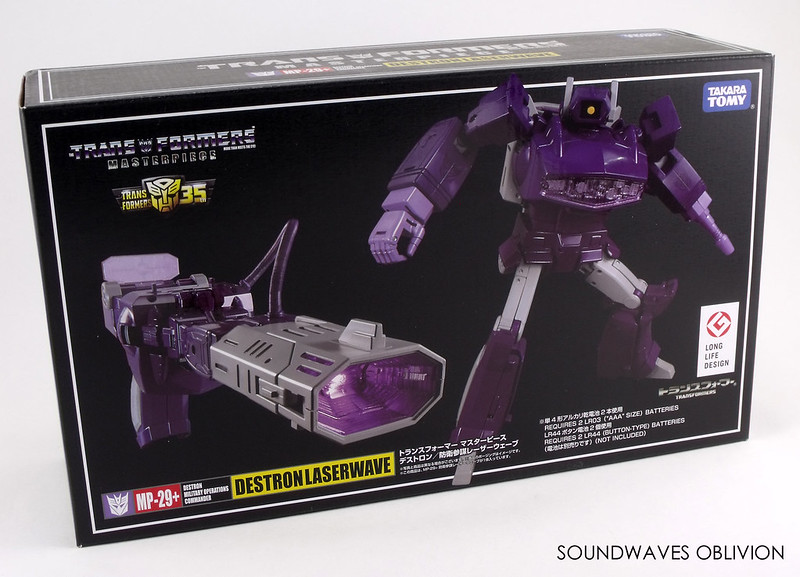 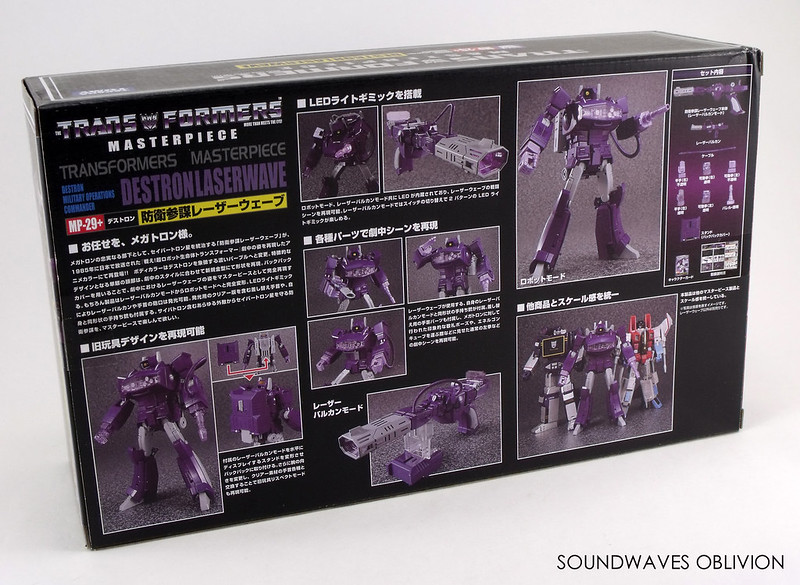 MP-29+ Laserwave was released in November 2018 as a Takara Tomy Mall exclusive and retailed for 21,600 Yen (approx £158 / $200). MP-29+ is a straight repaint of the version released 3 years prior in March 2016 but in addition the robot head has been slightly remoulded to accommodate a smaller eye, both forearms now have the Destron symbol tampographed on (MP-29 came with stickers), the small handgun accessory now has a rubber hose instead of knitted fabric and it comes with a new translucent left fist accessory which was omitted from the original release. 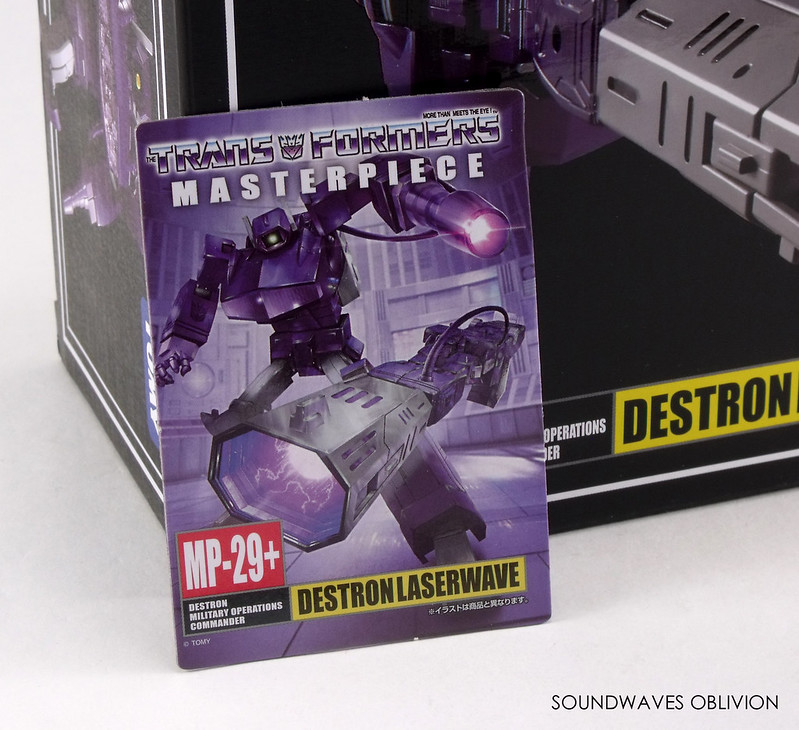 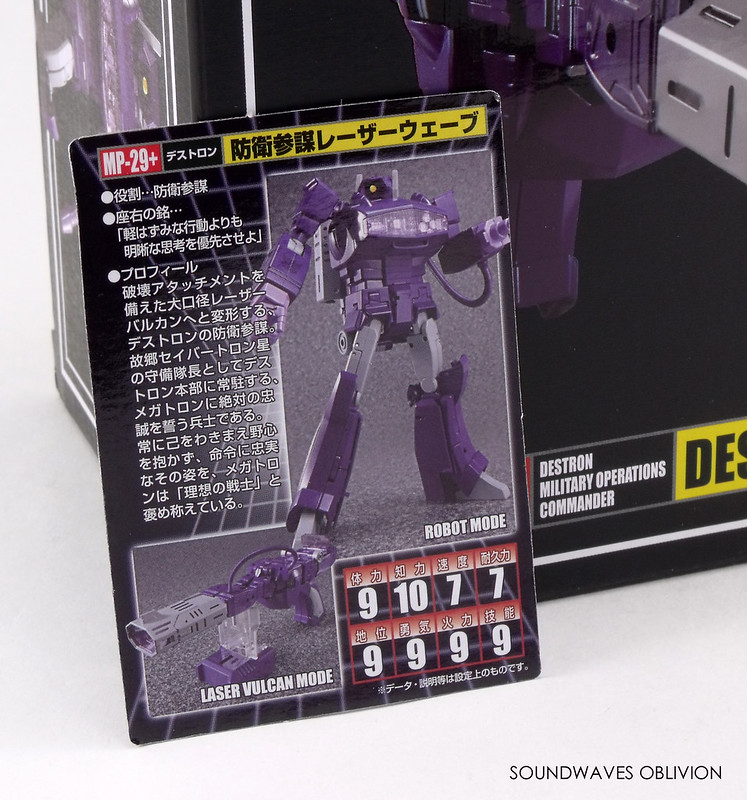 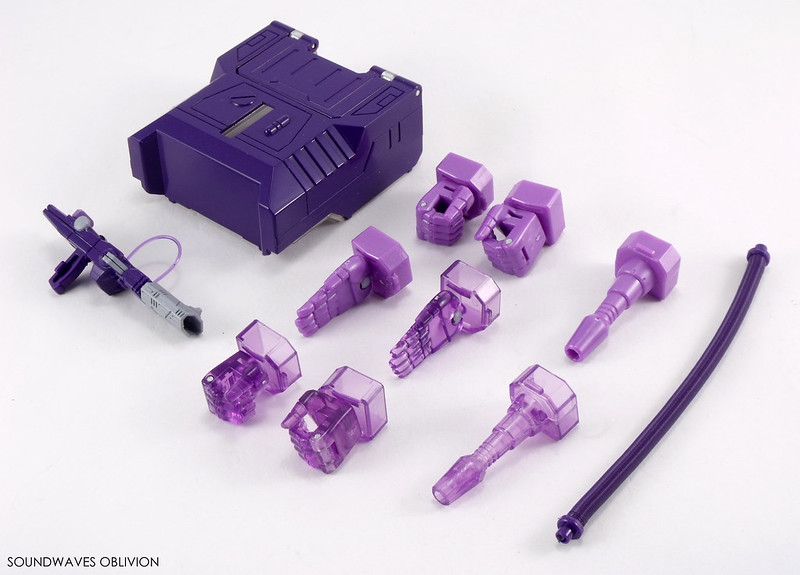 The box is slightly different as well, it is the same size as the original but the artwork is now laid out horizontal instead of the upright box of the original. Just like the 2016 version Laserwave's name is displayed as "Destron Laserwave" in English but the Japanese translates as "Defence Staff Officer Laserwave". 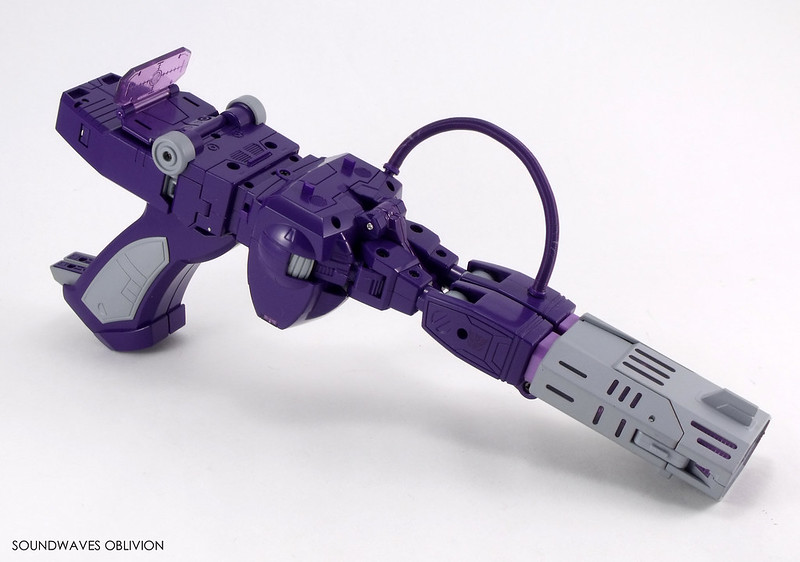 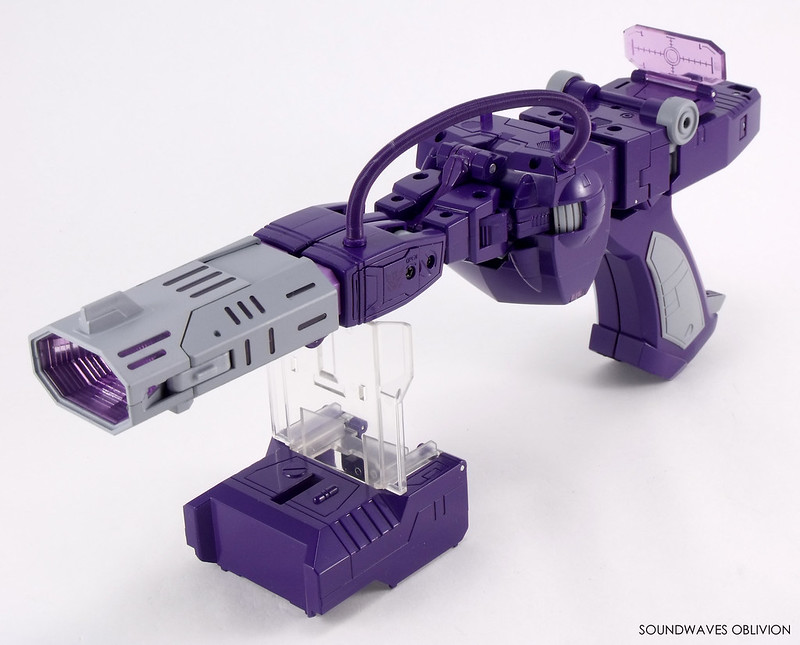 Laserwave comes packaged in Laser Vulcan mode and the "hose" accessory comes in a separate plastic back and like the original MP-29 is a painted spring. Much like the original toy there is a battery cover on the back of the gun mode which takes 2 AAA batteries. This is to light up the gun barrel when the trigger is pulled. There are two settings for the LED light, there is a switch on the side of the gun mode allowing you to alternate your preference. One setting when the trigger is pressed is just to light up the barrel and when you release the trigger the light goes out; the other setting is when you press the trigger the light pulses 10 times and then goes out. 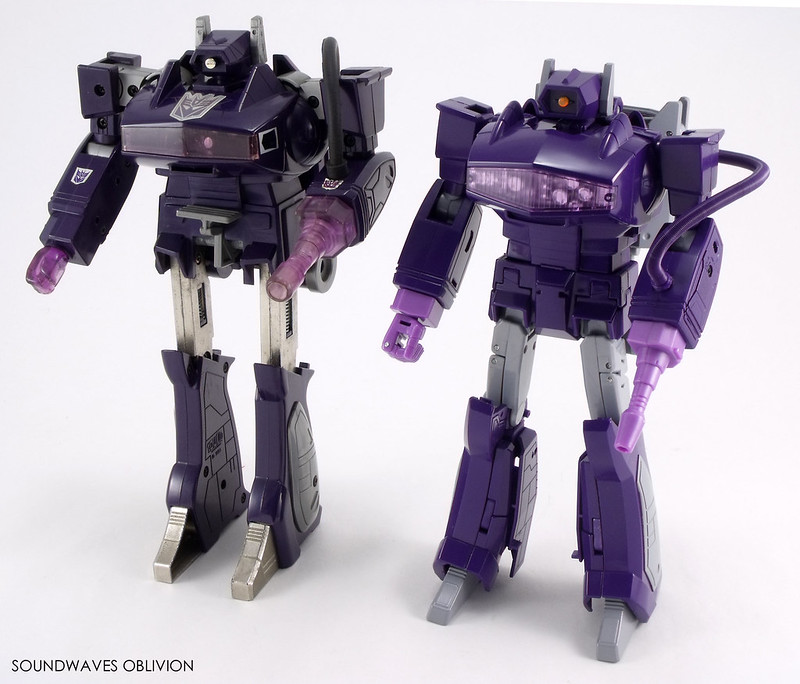 The gun mode is the same size as the original 1985 version and when transformed into robot mode, both versions are roughly the same size. 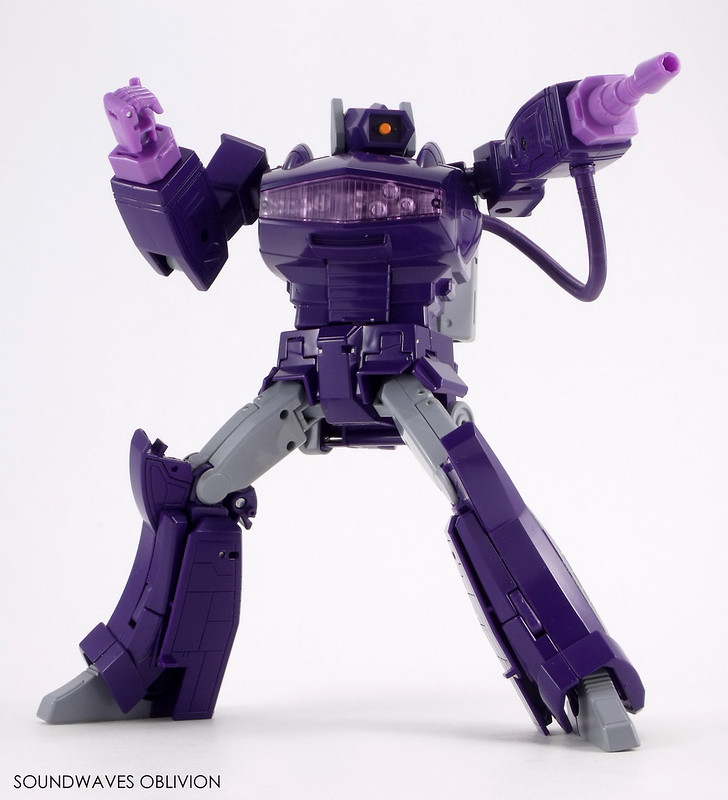 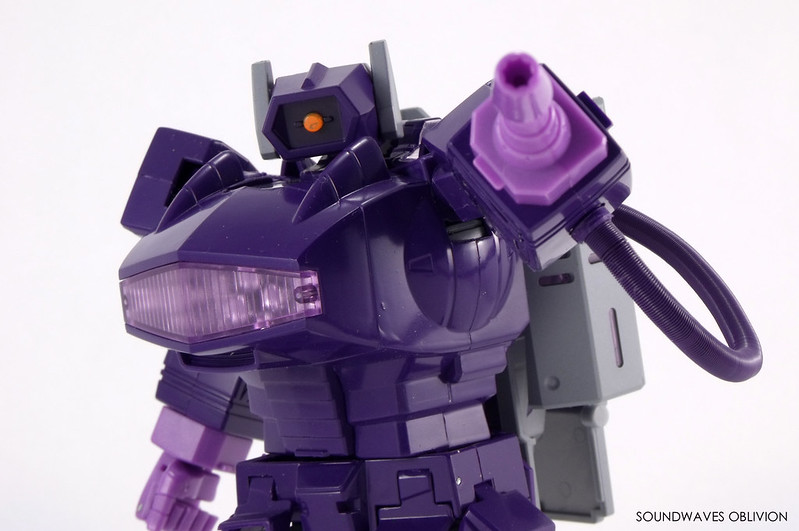 In robot mode, MP-29+ looks much better in the darker purple colour scheme and smaller eye; it's a shame they didn't include a glowing eye gimmick. I found this version of Laserwave to have a much smoother transformation than the 2016 version, especially with the pulling the head up and clicking it into place. 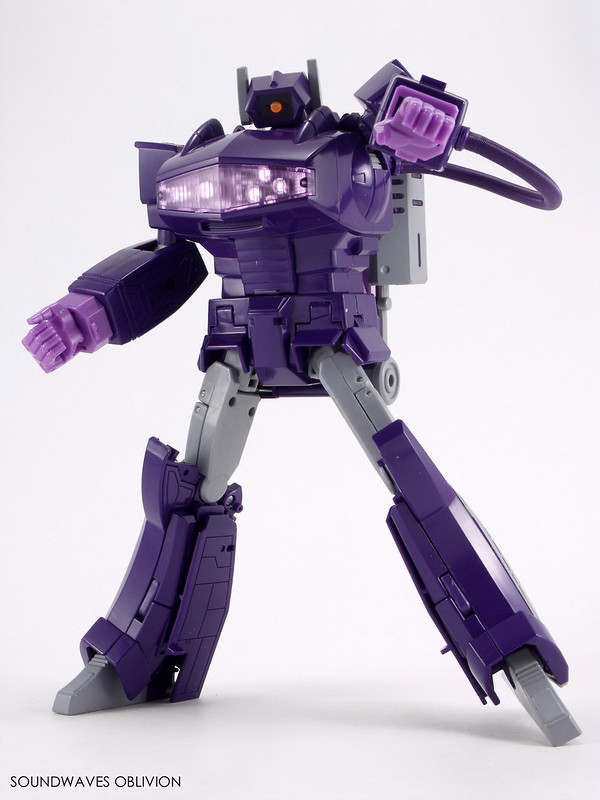 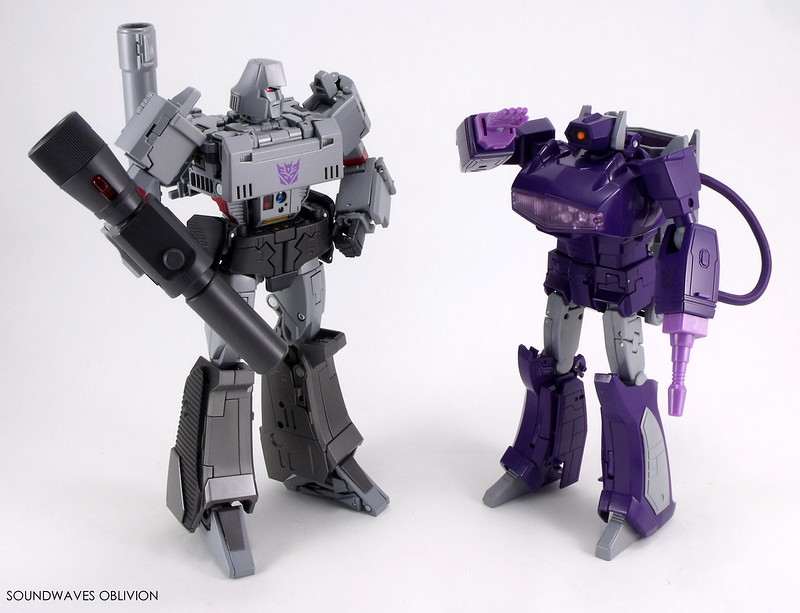 As you'd expect Laserwave is very poseable with multiple options for fist swaps, you even have a saluting hand to recreate that one and only time Laserwave salutes Megatron in the first episode after he is given command of Seibertron / Cybertron. You can also rotate Laserwaves forearms to replicate the 1985 toy version where the hose is on his front forearm. 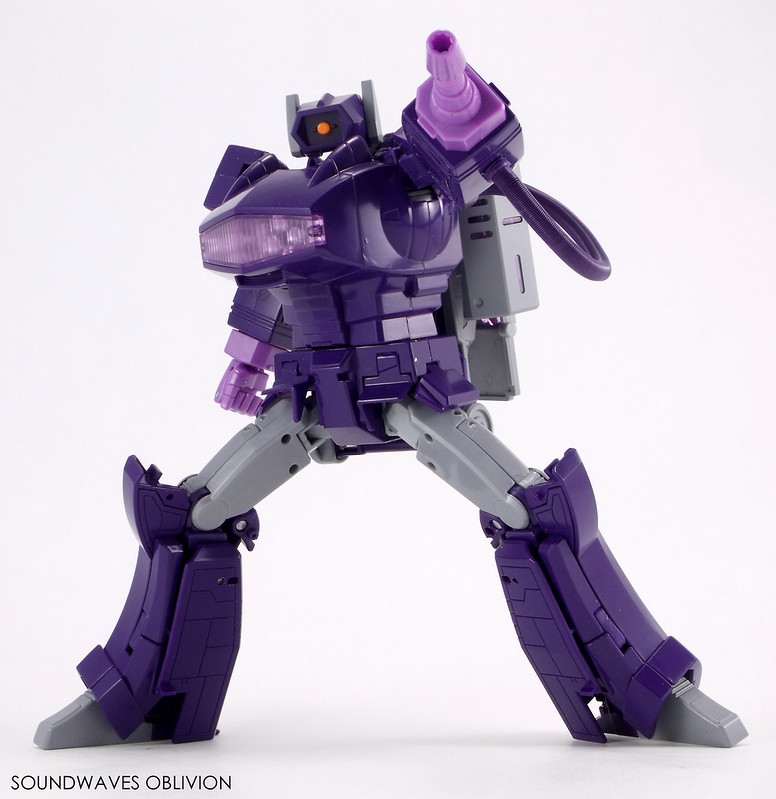 A negative aspect of this figure is Laserwaves backpack cover. As the gun barrel is painted grey (the 2016 version was moulded grey), the paint easily scratches off when you take the back pack on and off which is pretty poor for a Masterpiece figure. 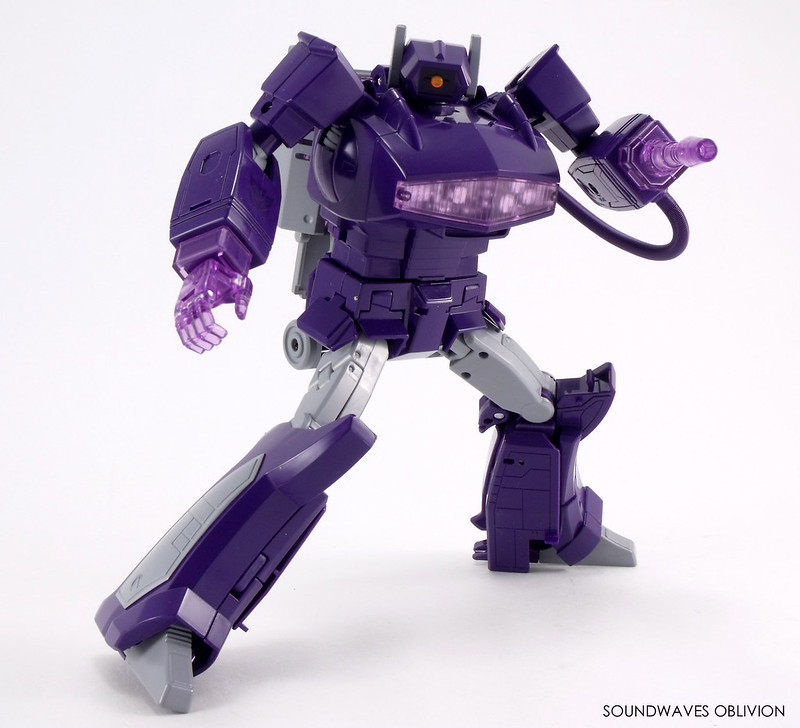 The 2016 Laserwave fell flat for me and this figure shows what a change of colour can do to a figure as I much prefer this version. I disliked the light purple colour used and the green tinted eye, that version felt off to me but this figure corrects those issues. The purple used is very close to the original 1985 toy so the fact this is called a cartoon accurate figure is a bit confusing although the shades of purple used for Laserwave in the cartoon did change from pale to dark but Takara seems to like using the lavender shade of purple (see 2009 Henkei Cyclonus, 2016 Legends Galvatron and the 2016 Legends Shockwave). 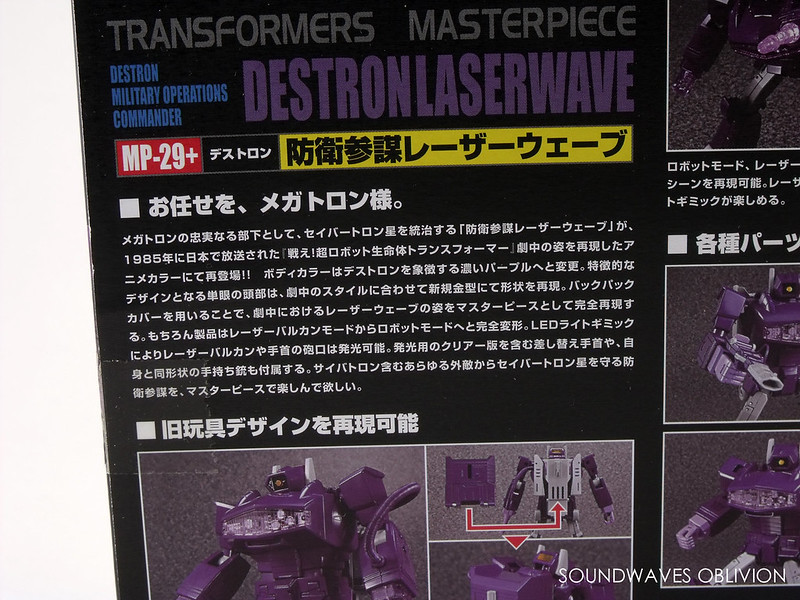 ■Leave it to me Megatron. (Translated from the back of the box)
Megatron's faithful subordinate, “Military Operations Commander Laserwave” who oversees planet Seibertron is recreated in his cartoon colours faithful to his appearance in “Fight! Super Robot Lifeform Transformers” first broadcast in Japan in 1985. The colour of his body is now a dark purple which symbolises the Destrons. His characteristic monocular head has been redesigned in accordance to his cartoon appearance. By using his backpack cover, this masterpiece can truly recreate the Laserwave seen in the cartoon. This product can of course transform from Laser Vulcan to robot mode. His LED light gimmick allows his Laser Vulnan mode and Gun Barrel hand to emit light. A replacement translucent fist and a translucent gun barrel hand are also included. The Military Operations Commander protects Seiberton from all external threats including the Cybertrons, we would like you to have fun with this Masterpiece. 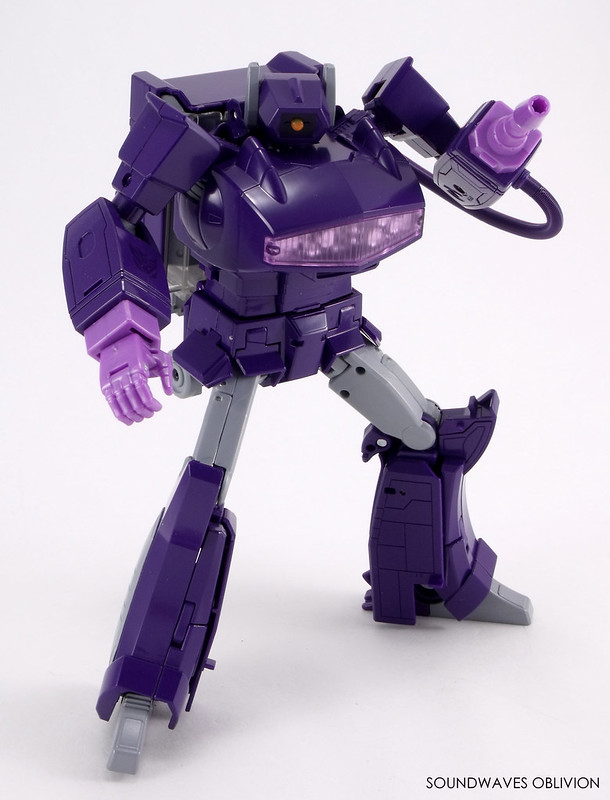 Robot Mode: Destron Laserwave (Translated from the instruction pamphlet)
Function: Military Operations Commander
Motto: "Clarity of thought before rashness of action."
Profile
When you talk about the most loyal Destron in “Fight! Super Robot Lifeform Transformers”, there is none other but the Military Operations Commander, Laserwave. A Destron faithful to his Commander who knows his role and lacks any leadership ambition. Laserwave’s loyalty makes him the “ideal warrior” according to the Emperor of Destruction Megatron, and he has been loyal for the last 9 million years. In the early days of Megatron’s coup, Laserwave was left in charge of defending Siebertron while the Destrons pursued the Cybertron spacecraft. For 4 million years believing his master would soon return, he oversaw the running of the planet. One of his achievements was to subjugate the continual resistance of the female Cybertrons. After Megatron was revived on Earth, Laserwave supported the Destrons whilst stationed in their headquarters on planet Seibertron. Laserwave is also an excellent engineer; he headed the development of the Space Bridge Time Machine and also performs repairs to the Destron headquarters. With a powerful laser cannon and superior intelligence, Laserwave is a Destron who has supported and served Megatron with unwavering loyalty. 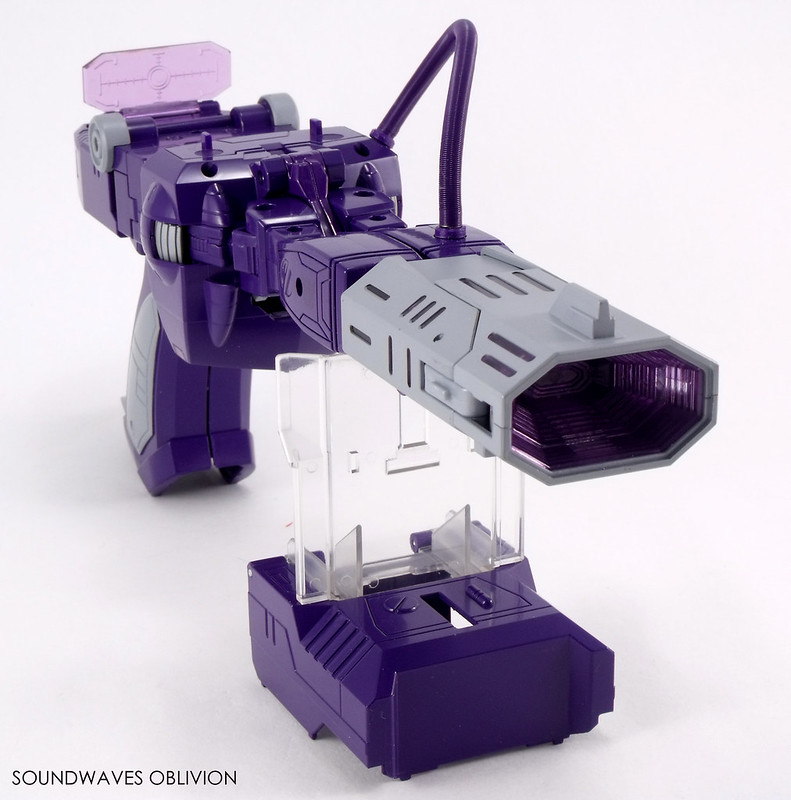 Laser Vulcan Mode: Laser Vulcan (Translated from the instruction pamphlet)
Like Megatron Laserwave transforms into a gun, however as he did not scan an Earthen mode, instead he converts into a Seibertronian Laser Vulcan. His mass does not change and the gun mode can hover and fire by itself. The destructive power emitted from his gun barrel is tremendous. Pulling Laserwave’s trigger will also fire his gun mode as seen when the rebellious Combatrons formed Bruticus who used him as a weapon. Additionally Laserwave commands a powerful guard unit whose number and strength surpassed that of the Dinobots. Laserwave’s primary function is to defend Seibertron from Cybertrons, Earthlings and other interplanetary invaders. In 2005 when Unicron descended upon Seibertron, Laserwave was in command of the defense against the oncoming threat. 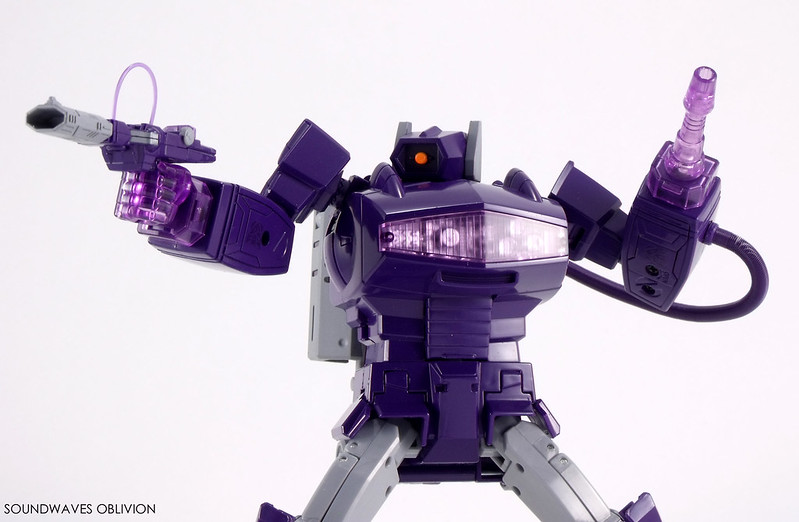 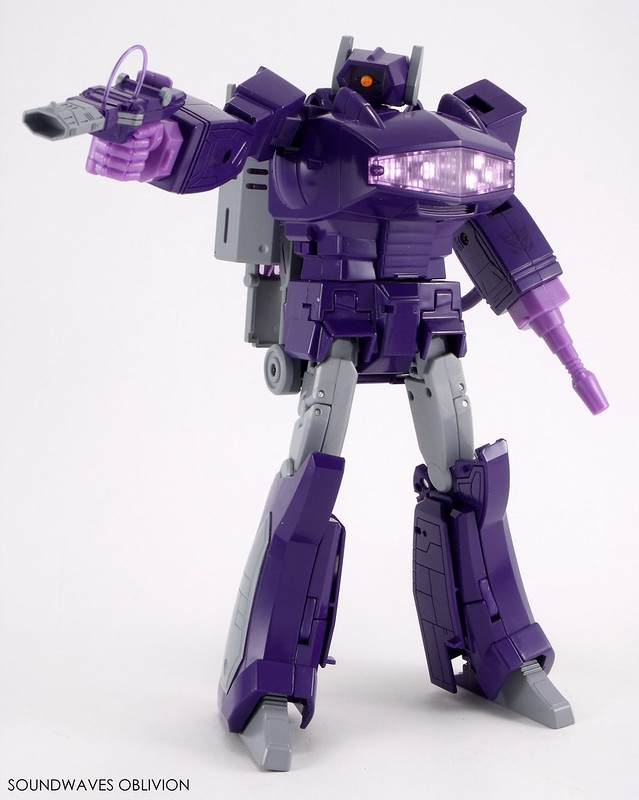 Weapon: Laser Vulcan (Translated from the instruction pamphlet)
A hand gun Laserwave uses in the cartoon. Although this is the same style of gun as Laserwaves Laser Vulcan mode, this gun is not his preferred weapon. In other scenes many characters are using this same weapon so it would appear that this is a Destron regulation weapon. In episode 27 of Fight! Super Robot Lifeform Transformers “Desertion of the Dinobots Part 1”, it is used to target Spike as he crossed the Space Bridge. 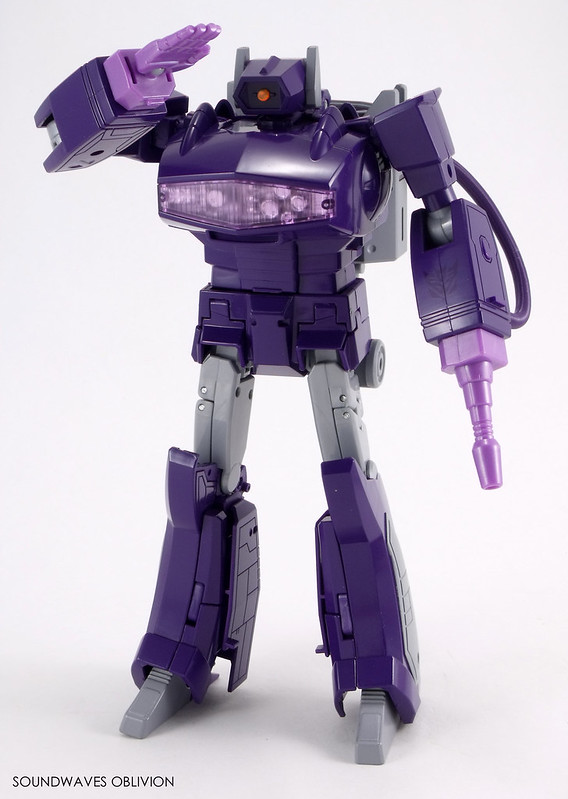 Accessory: Barrel & Hand (Translated from the instruction pamphlet)
As well as Laserwaves characteristic barrel wrist, he has a number of replacements; he is shown to have a normal left fist several times during the cartoon. Also included is a flat hand accessory to recreate the impressive salute pose for Megatron. The various translucent hands respect the design of the original toy. This time he comes with a translucent left fist. 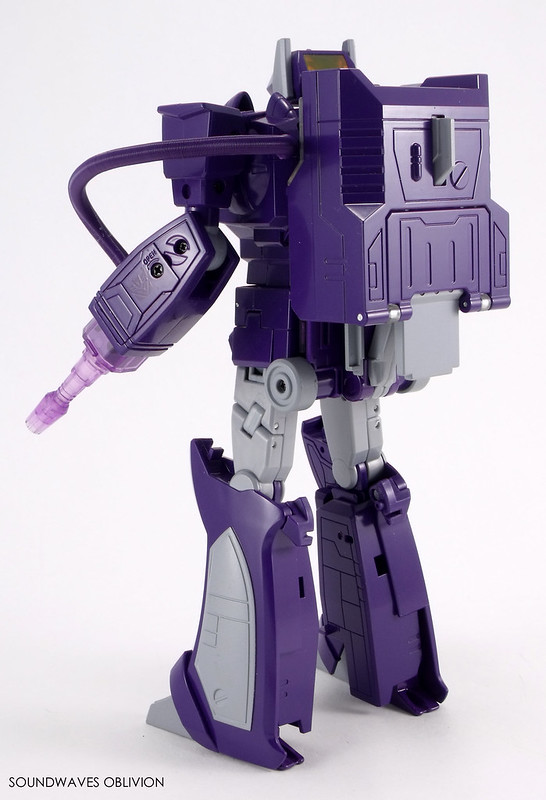 Accessory: Backpack (Translated from the instruction pamphlet)
The stand used for displaying the Laser Vulcan can be transformed into a backpack cover; by attaching this in robot mode it closer resembles Laserwave’s anime and original toy in colouring and design. 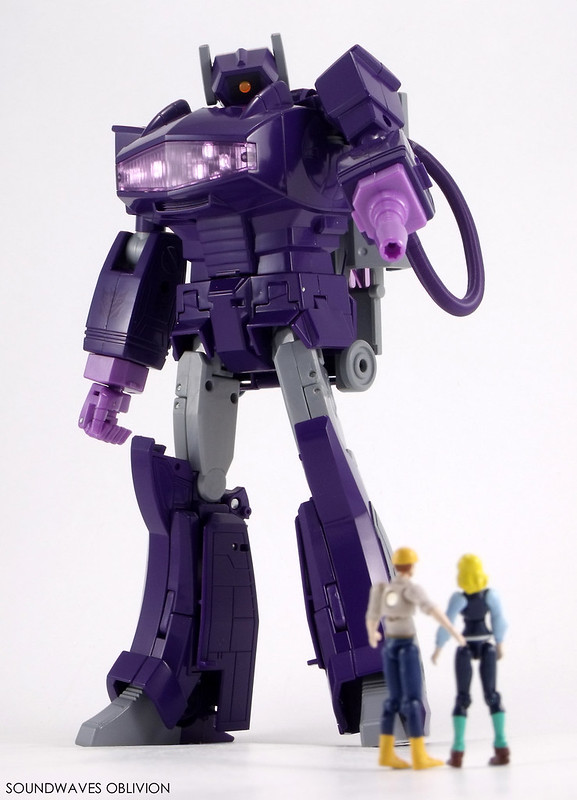