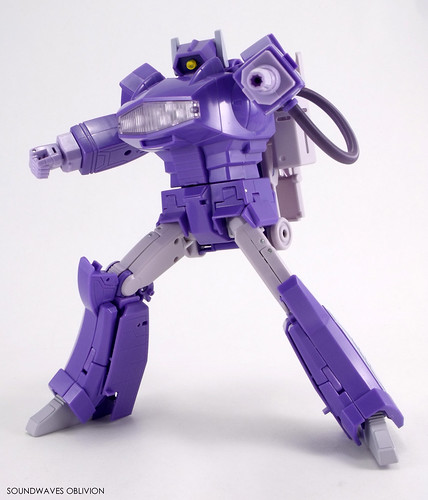 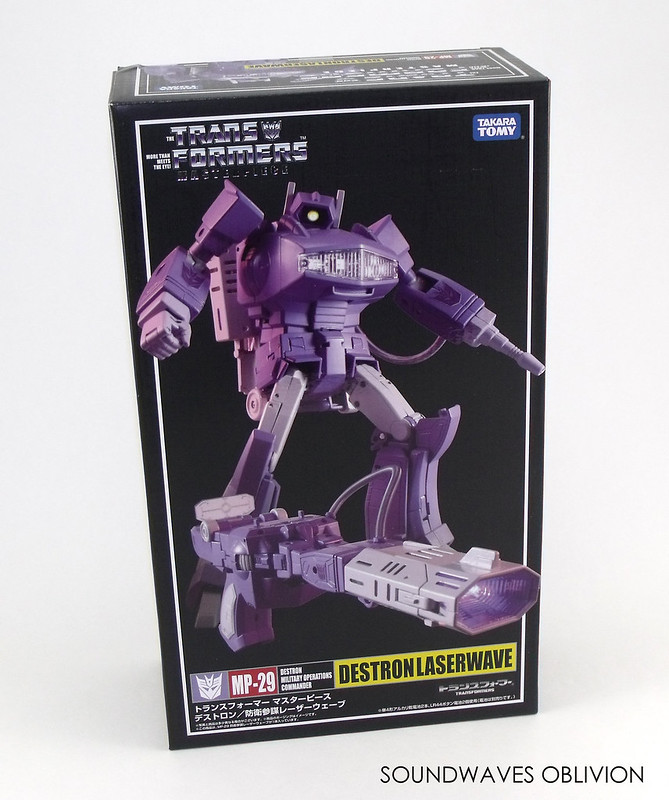 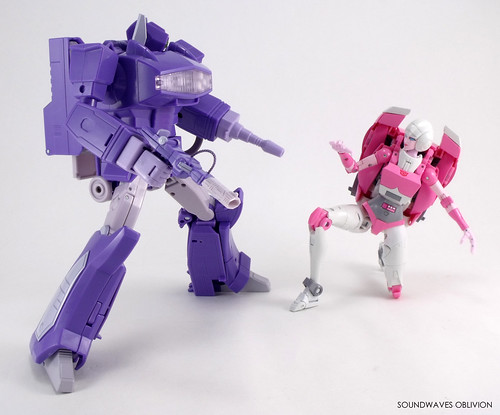 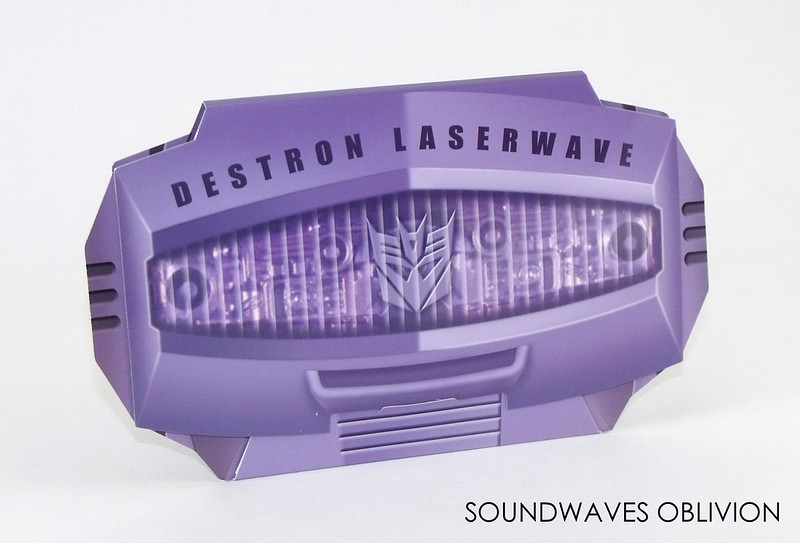 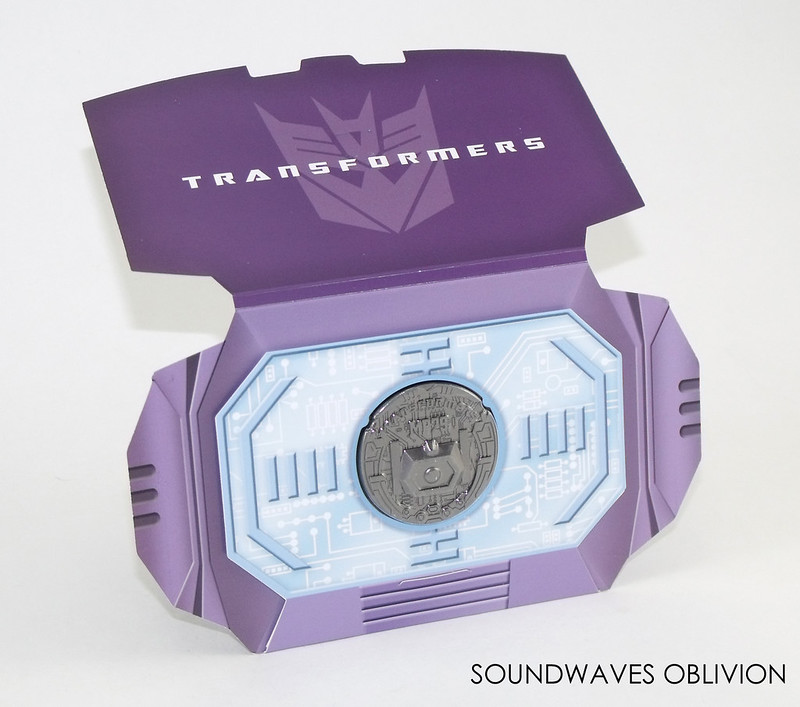 Masterpiece Laserwave (aka Shockwave) was released in March 2016, the Asian release also came with the standard collectors coin. Laserwave is the first Destron Masterpiece to have the cartoon style design, which is especially noticeable in the shade of purple used, whereas the original G1 version is a much darker shade. Laserwave was reissued in November 2016 in Asia which cane with a diecast Megatron gun accessory. 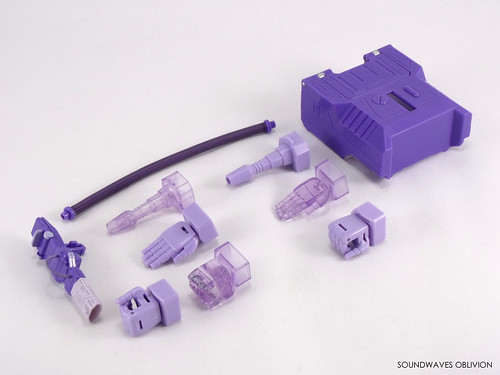 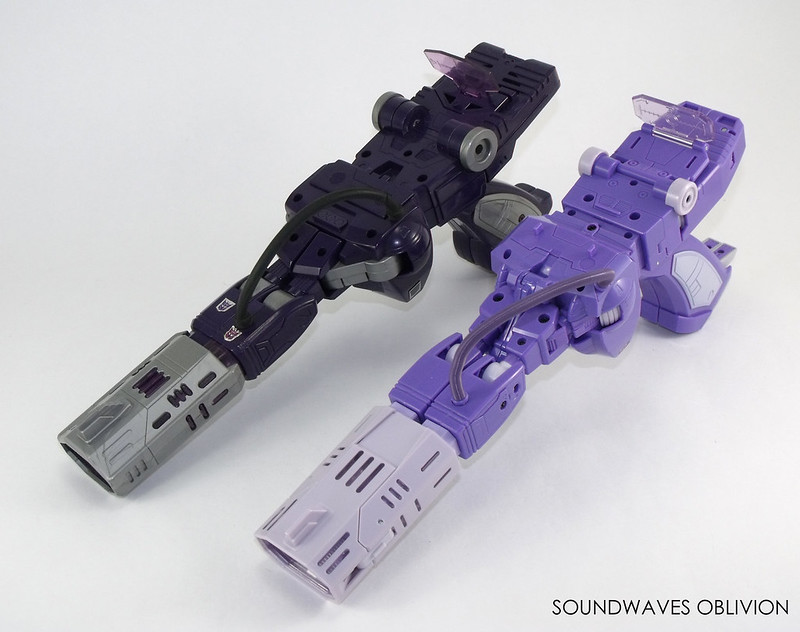 Laserwave comes packaged in gun mode just like the original G1 version; the hose attachment does not come fitted to the figure although the plastic tray is moulded  to fit it. The hose attachment itself is an improvement on the original rubber hose, this is basically a metal spring. Like the cartoon the hose is purple, the purple appears to be the colour of the metal or at least it's coated in something other than painted, although I could be wrong. The gun mode is also a similar size to the original version. 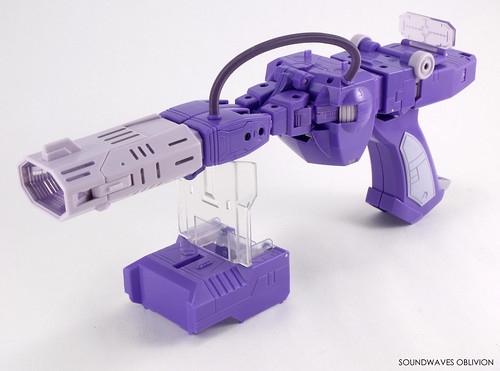 Similar to the G1 toy on the back of the gun mode there is a battery compartment which takes x2 AAA batteries (unlike the 9v battery of the 1985 toy). When the trigger is pressed the gun barrel lights up purple, when the trigger is released the light turns off. The Masterpiece figure does not have any sound effects to go with the light effects. The gun mode also features a flip up translucent sight. 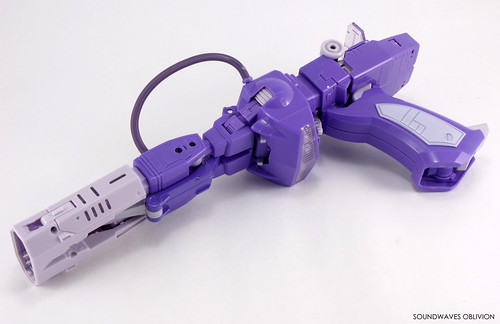 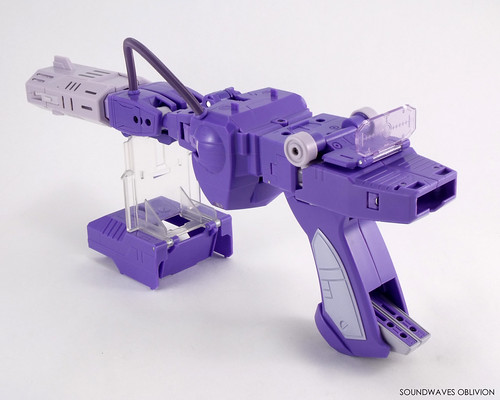 The rear of the gun is also hollow, its something which could have been filled. On the G1 toy this rear section housed the electronics for the sound effects, on the Masterpiece version the rear section forms the robots legs. The back pack section on the Masterpiece version is a separate accessory. In robot mode it clips on the back but in gun mode it forms a stand for the gun mode which is a nice touch. 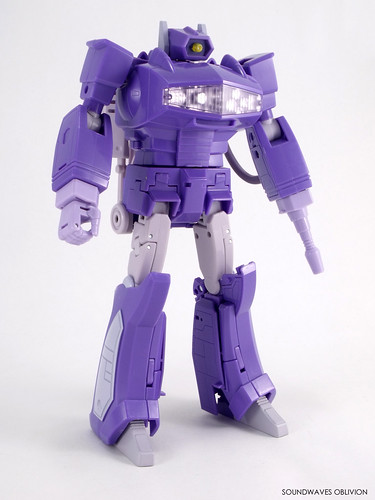 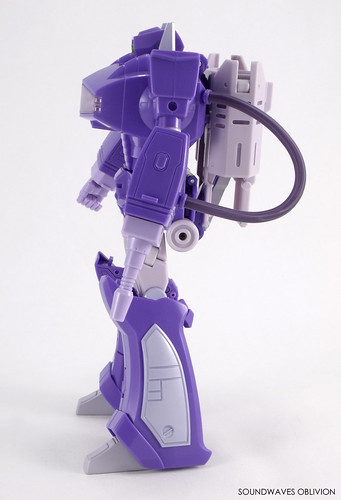 Transformation from gun mode to robot mode is similar to the original figure with a few differences. The barrel of the gun no longer separates from the figure, its attached by a diecast metal arm and folds onto the robots back. The trigger flips up into the robots torso and the grip and rear of the gun mode have an interesting transformation to form the robot legs. 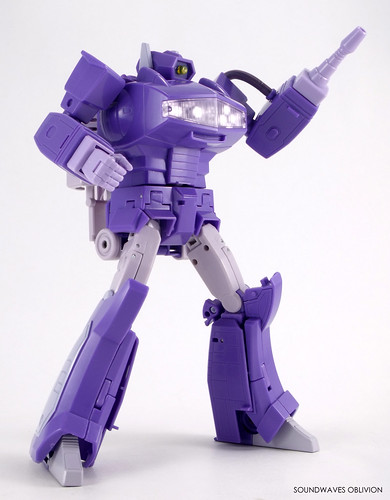 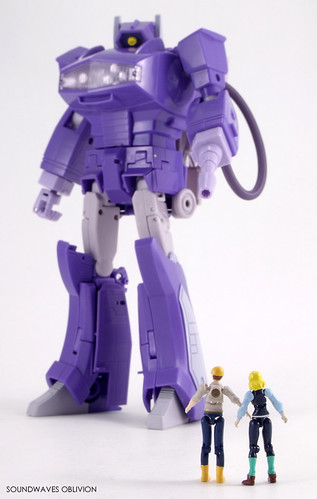 In robot mode Laserwave stands a similar height to the G1 version, the single eye is light piped so you can give it the impression that it flashes when you shine a light behind it. This is also the first Masterpiece to feature any light piping in the robot head. 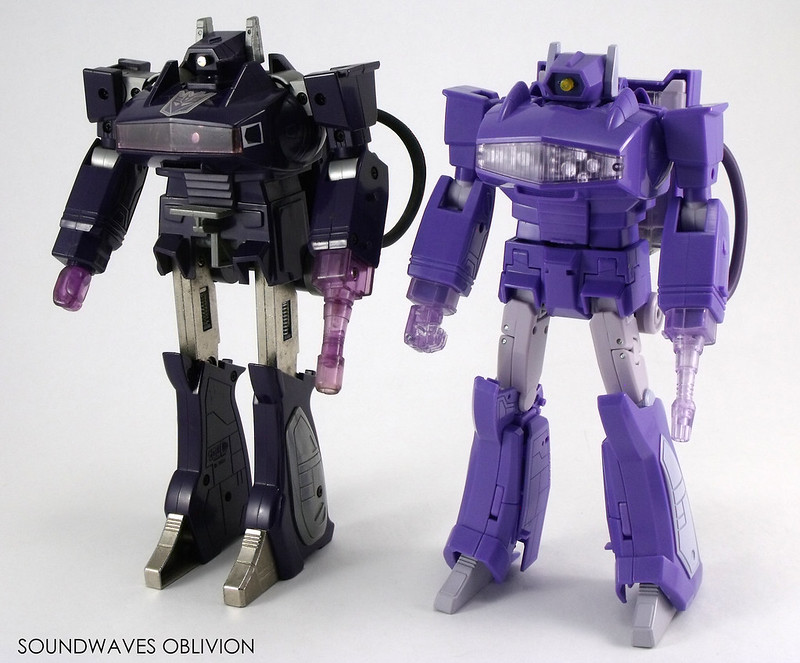 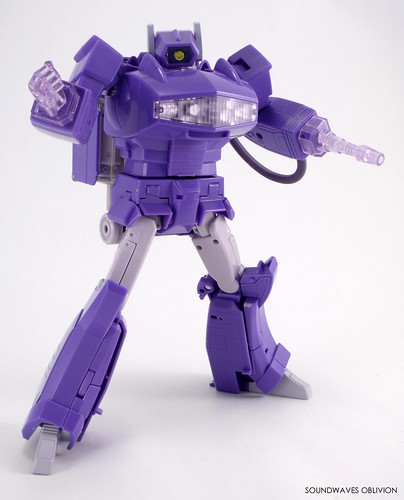 The arms and shoulders feature stiff ratchet joints whereas the legs are quite loose at the hips, although this could be an issue with my version. There is a waist swivel as well as an abdominal crunch, however you need to pull the robots torso up from the leg section until you hear a click in order to get this added articulation. The left gun arm also has a battery compartment for X2 LR44 batteries. There switch on the side which when pressed the gun barrel pulses 8 times in a purple light. This has a better effect when using the translucent gun barrel accessory. 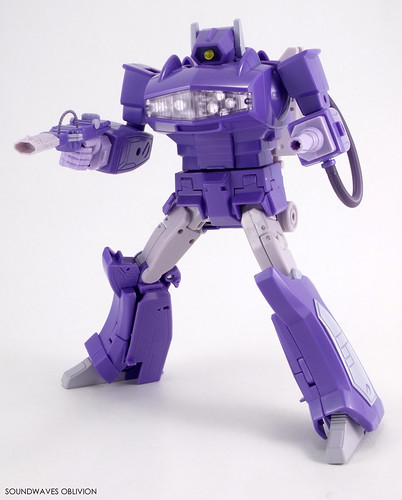 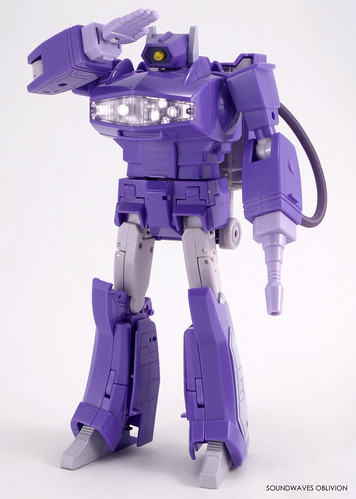 Laserwave comes with several hand accessories. As well as the main hand and gun barrel he comes attached with, there is a left hand to replace the gun barrel with to give his 2 handed appearance from the first G1 episode "More than meets the eye Part 1". There is also a right hand for saluting, as seen in the same first episode. The hand can't touch the head when bending the elbow however the elbow joint can slide back or forth; when slid forward the saluting hand can almost touch the head. This feature is not mentioned in the instruction manual and I forgot to take a photograph of this so I shall revisit this at a later date. Laserwave also comes with a translucent right fist, saluting hand and gun barrel to replicate the original toy. 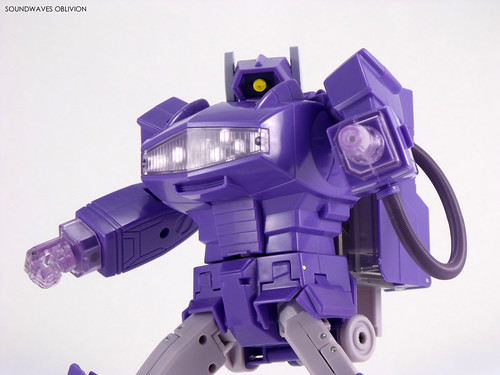 The backpack is a separate section due to the leg transformation,  I find it odd that Takara Tomy advertise it as an optional extra rather seeing as it is one of the main features of Laserwave in both the original toy and cartoon. Laserwave also comes with an additional sticker sheet so you can either add cartoon styled Decepticon / Destron insignia's or the original toy versions.

Overall Laserwave is a really good addition to the Masterpiece line, I was underwhelmed at first as the figure is incredibly similar to the original toy and I was put off by the pastel shade of purple used but the figure has grown on me especially having played with it a bit when I was photographing it. A nice touch Takara Tomy make is in the extended bio where they reference the Shockwave from Marvel Comics wanting to usurp Megatron rather then being the loyal cartoon version. 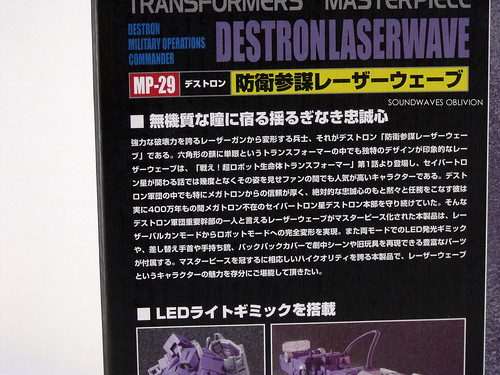 ■ His mechanical eye reflects unchallenged loyalty. (Translated from the back of the box)
The Destron “Military Operations Commander Laserwave” is a warrior who transforms into a huge laser gun possessing incredible power. When compared with other Transformers, Laserwave has a unique design with his hexagonal face and single eye. He appeared in the very first episode of “Fight! Super Robot Lifeform Transformers'' and appeared in further stories involving Planet Seibertron and he quickly became a firm fan favourite. Fiercely loyal to Megatron, he performs his duties without question and has protected the Destron Headquarters for 4 million years in his masters absence. This Masterpiece Laserwave, who can be said to be one of the most important Destron warriors, is fully transformable from Laser Vulcan Mode to Robot Mode. Additionally he has an LED gimmick in both modes as well as replacement hands and a handgun. He comes with a wealth of extra accessories allowing you to recreate scenes from the cartoon as well as the original toy with his backpack cover. This is a high quality product utilising the power of Laserwave’s character and is truly deserving of the Masterpiece title. 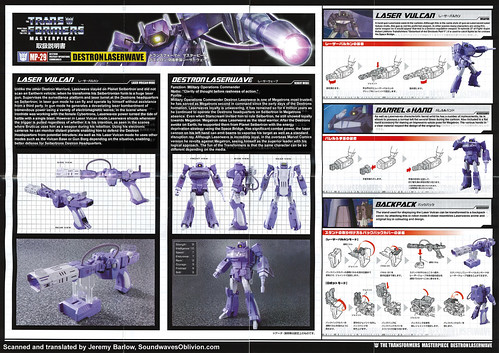 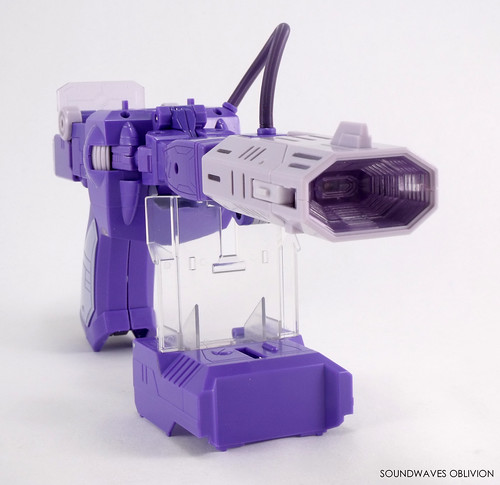 Laser Vulcan Mode: Laser Vulcan (Translated from the instruction pamphlet)
Unlike the other Destron Warriors, Laserwave remained on Planet Seibertron and as such did not scan an Earthen vehicle. When he transforms his Seibertronian form is that of a huge laser gun. Supervises the surveillance platform and laser turret at the Destron headquarters on Seibertron; in laser gun mode he can fly and operate by himself without assistance from a third party. In gun mode he generates a devastating laser bombardment of tremendous power using a variety of electromagnetic waves. In the scene where Ironhide was working with the female Cybertrons, Laserwave’s power turned the tide of battle with a single blast. However, in Laser Vulcan mode Laserwave shoots whenever his trigger is pulled, regardless of whether it is his intent as seen in the scenes where Bruticus uses him as a weapon during his rebellion. Using his electronic cameras he can monitor distant planets enabling him to defend the Destron Headquarters from potential intruders. As well as his Laser Vulcan mode he uses other modes such as the Vulcan Base or Gun Borg depending on the situation which enables better defense for the Destron Headquarters on Seibertron. 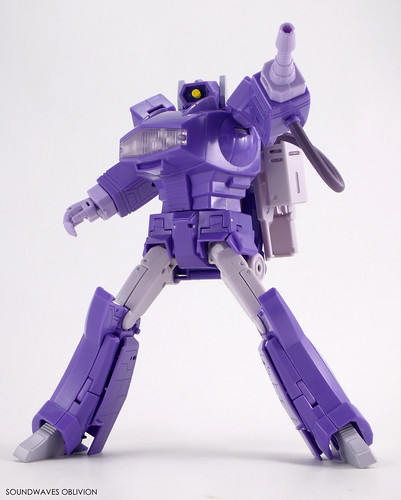 Robot Mode: Destron Laserwave (Translated from the instruction pamphlet)
Function: Military Operations Commander
Motto: "Clarity of thought before rashness of action."
Profile
Military Operations Commander Destron Laserwave is one of Megatron’s most trusted and has served as his second-in-command since the formation of the Destrons. Laserwave’s loyalty is unwavering which remained as such for 4 million years as he continued to preside over the Destron’s headquarters on Seibertron in Megatron’s absence. Even when Starscream invited him to rule Seibertron, he showed his loyalty to Megatron. Megatron rates Laserwave as the ideal warrior. After the Destrons were awakened on Earth, he supported them from planet Seibertron and used the Space Bridge to send them energy reserves. Has significant combat power; the laser cannon on his left hand can emit beams to vaporise his target as well as a standard disruption ray. Although Laserwave is incredibly loyal in the overseas Marvel Comics he revolts against Megatron, seeing himself as the superior leader with his logical approach. The fun of the Transformers is that the same character can be so different depending on the media. 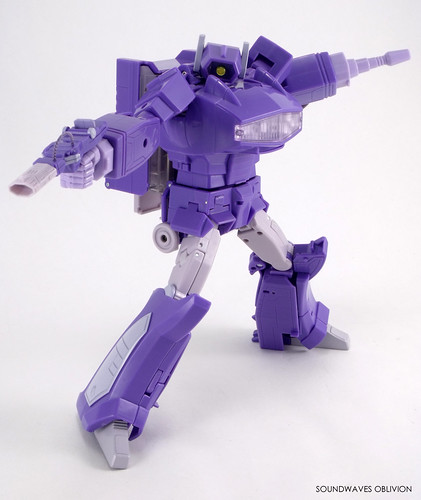 Weapon: Laser Vulcan (Translated from the instruction pamphlet)
A handgun Laserwave uses in the cartoon. Although this is the same style of gun as Laserwave's Laser Vulcan mode, this gun is not his preferred weapon. In other scenes many characters are using this same weapon so it would appear that this is a Destron regulation weapon. In episode 27 of Fight! Super Robot Lifeform Transformers “Desertion of the Dinobots Part 1”, it is used in the capture of Spike as he crosses the Space Bridge. 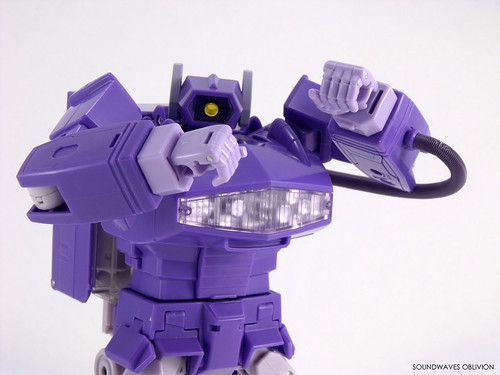 Accessory: Barrel & Hand (Translated from the instruction pamphlet)
As well as Laserwave's characteristic barrel wrist he has a number of replacements. He is shown to possess a normal left fist several times during the cartoon. Also included is a flat hand accessory for making an impressive salute pose for Megatron. The various hands in a clear material respect the design of the original toy. 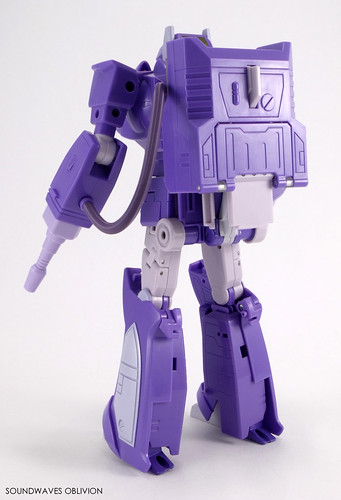 Accessory: Backpack (Translated from the instruction pamphlet)
The stand used for displaying the Laser Vulcan can be transformed to a backpack cover; by attaching this in robot mode it closer resembles Laserwave's anime and original toy in colouring and design. 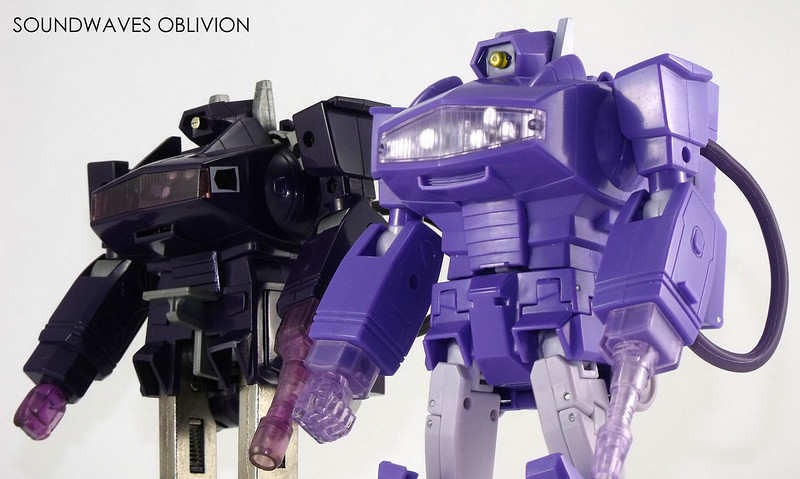