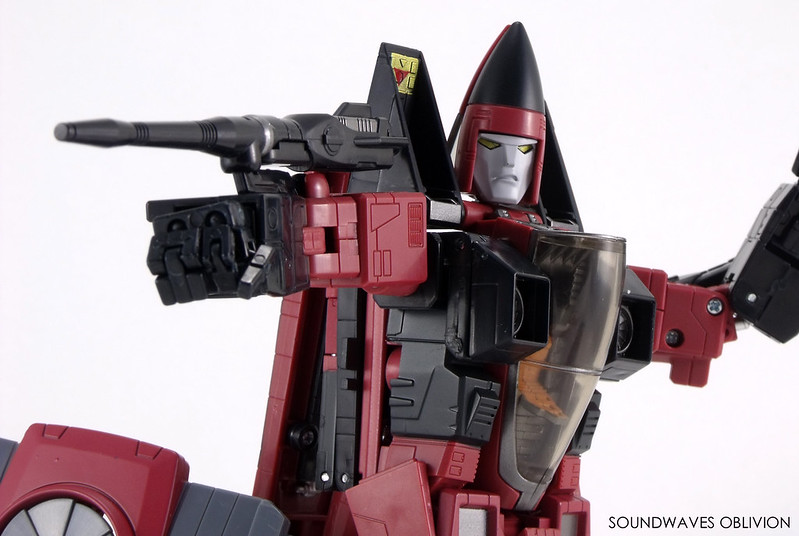 Profile (Translated from the Trading Card)
MP-11NT Destron New Jetron Warrior / Thrust
Function: New Jetron Warrior
Motto: "My engines' roar is my enemies' song of doom!"
Profile:
The Aerial Warrior Thrust is one of the new members of the Jetrons. Transforms into a jet with impressive vertical take-off wings; his propulsion force allows him to reach an instantaneous speed of Mach 5. The shockwaves he generates have power enough to damage surrounding buildings. A loudmouthed braggart but in critical situations he shows himself to be a weak kneed coward.
STR:8; INT:6; SPD:9; END:6; RNK:5; CRG:4; FBL:8; SKL:7 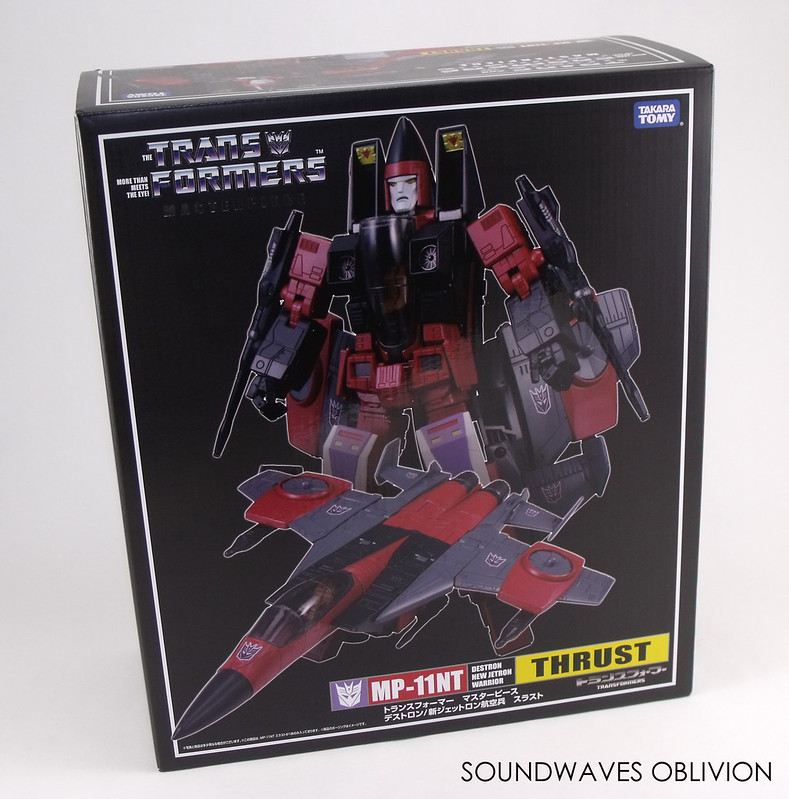 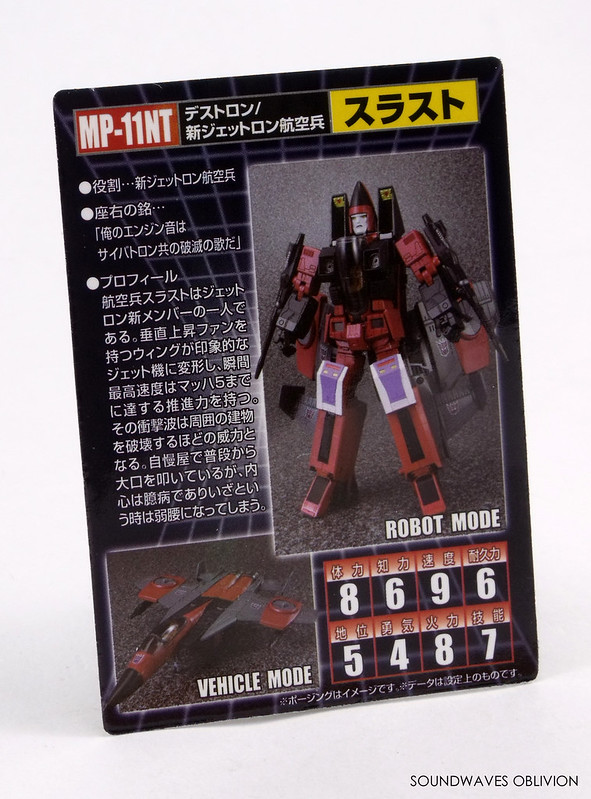 Thrust was the second "cone head" seeker released in October 2016 for a pricey 15,984 Yen (around $150 USD / £125) as a Takara Tomy Mall exclusive limited to 2000 pieces; this was also made available by Hasbro Asia. After the bad QC from the initial MP-11NR Ramjet release it was interesting to see how Thrust fared and unfortunately this has a few issues as well although not as bad as Ramjet. The main issue is the loose waist which appears to affect the majority of releases; I've also seen a lot of photographs with a paint chipped nose which also affects my copy. Another issue with my copy is that one of the arm guns has been misassembled affecting its ability to fold when transforming it into jet mode. As these arm guns fold, mine are quite floppy and are a pain to pose, I can't see why these needed to be remoulded in the first place. 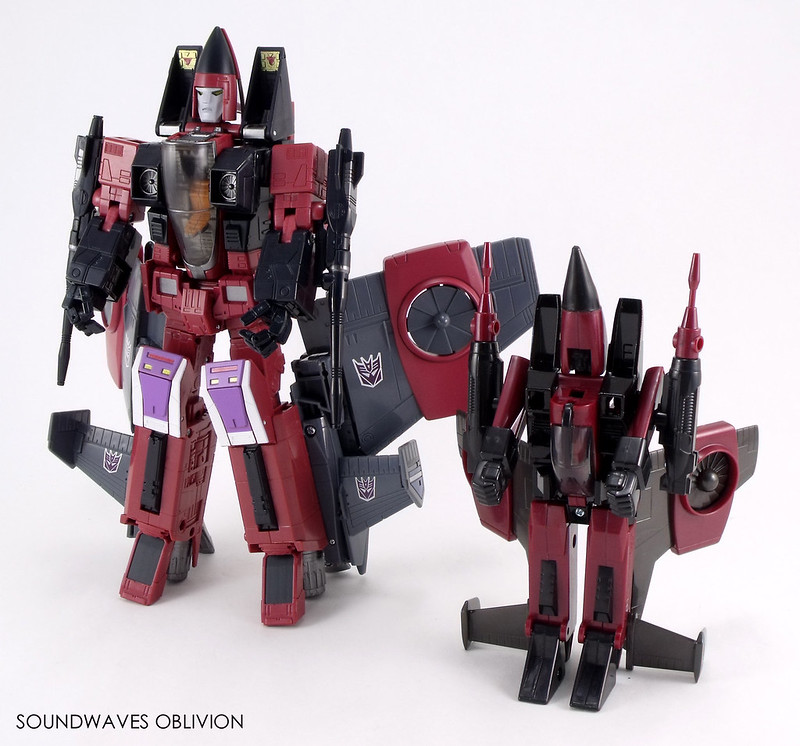 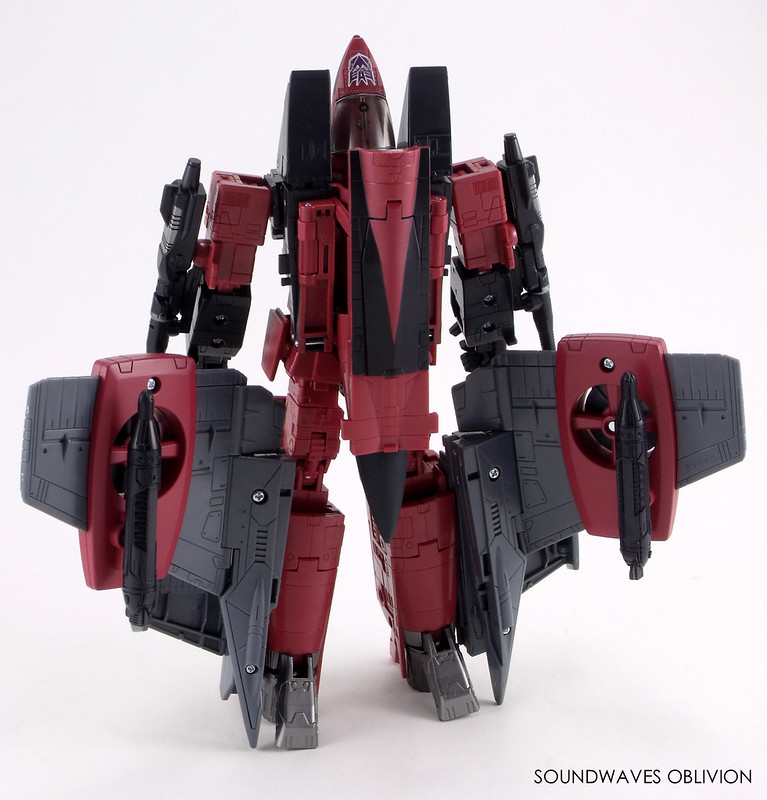 Thrust is boxed in robot mode and comes with a few accessories, two bombs for jet mode and a holographic pilot which could have easily been updated to Chip Chase (seeing as these two had a run in with each other in Megatron's Masterplan Part 2). 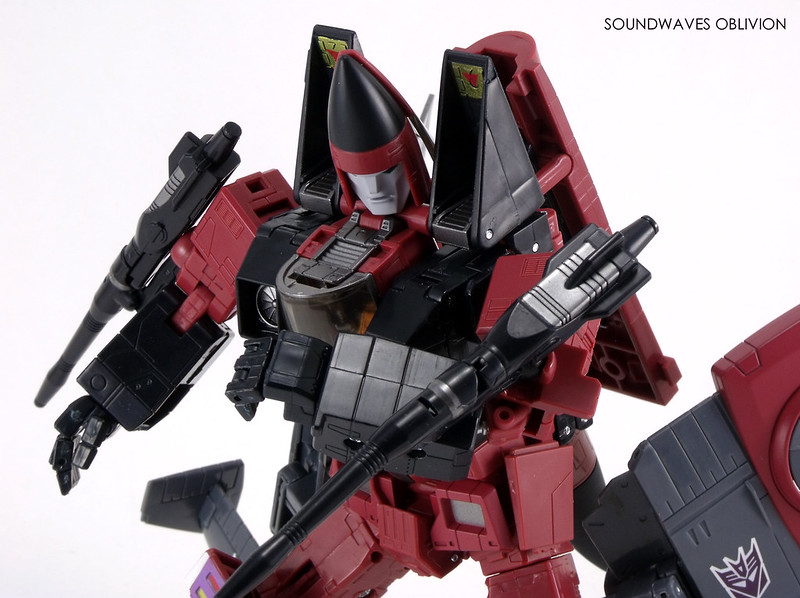 Thrust does look impressive in robot mode and does emulate the cartoon appearance, especially the wing placement on the legs. Thrusts face is a slight remould of Ramjet's and now features a scowl expression. Much like the other seekers Thrust is very hard to pose due to the limitations of movement. Another thing unchanged from Ramjet is the back panel does not plug into the nose of the jet at the rear of the robot like it did with the original MP-3 moulds. The Jets nose just hangs out the robots back and flops about. You'd expect for an expensive figure this would have been able to be fixed in place and as it is, it looks like it was just forgotten. 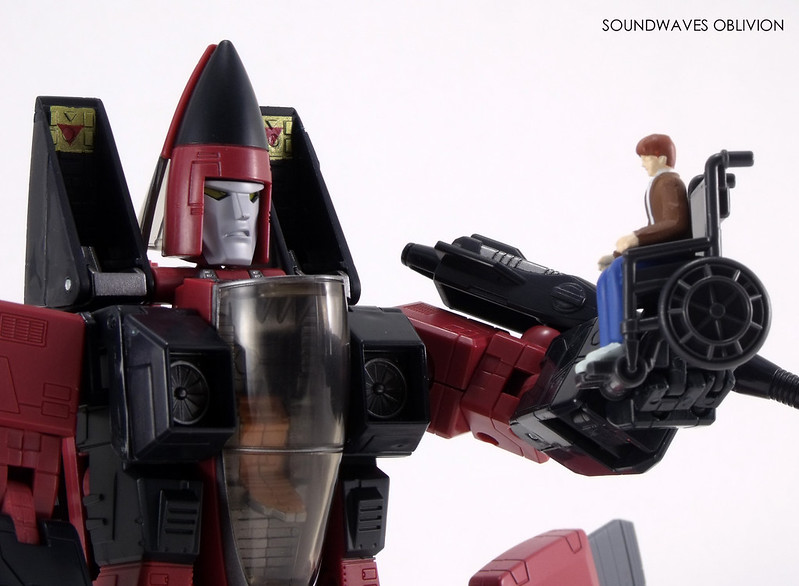 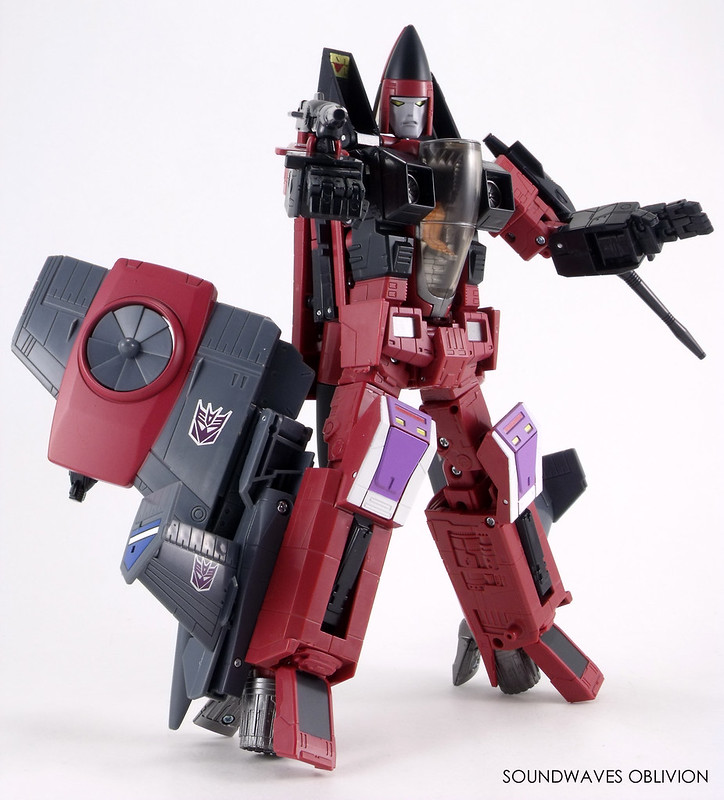 Transformation is identical to the other seekers apart from the new wings which are not as fragile as I'd expect to transform. Jet mode does have the same features as the other seekers (opening nosecone, canopy etc) and additionally the VTOL fans on the wings can also spin around. 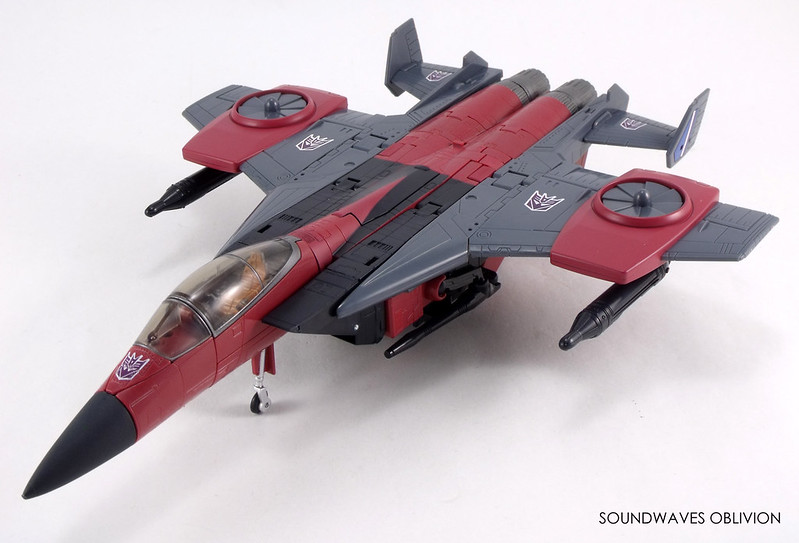 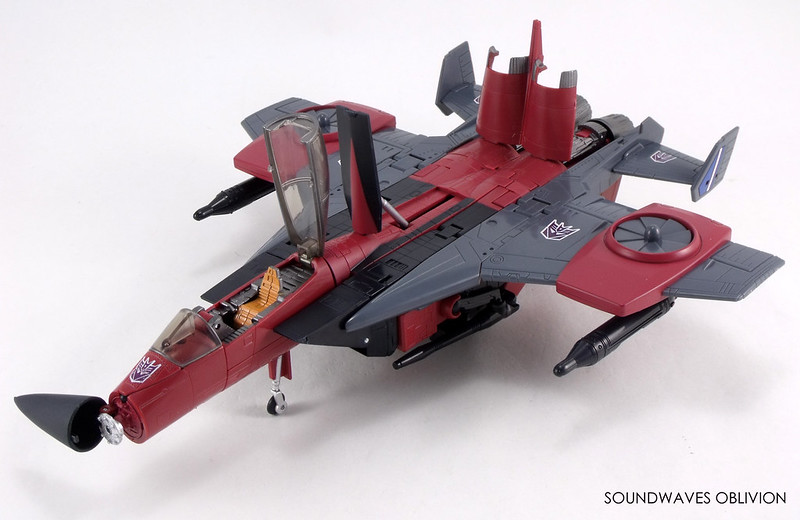 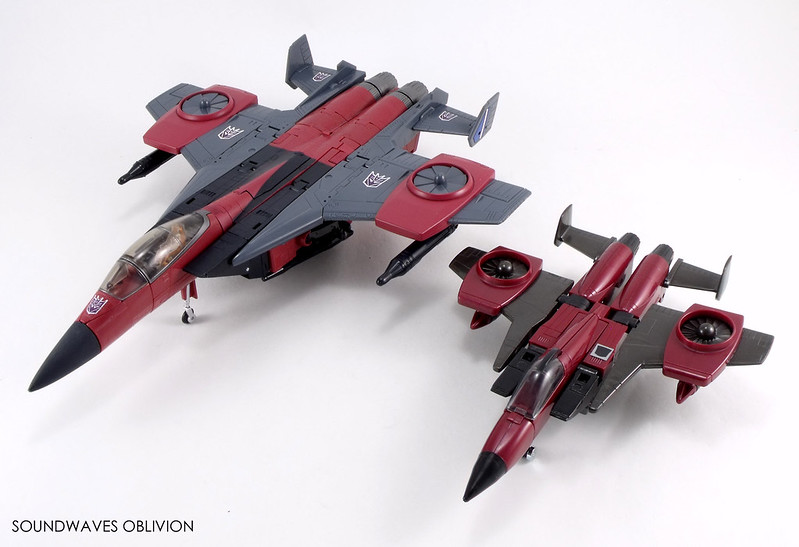 “Wings that roar and tear through the stratosphere” (Translated from the back of the box)
“Transformers” is the world's most famous brand of robots. The series created in the 1980’s was most loved by its target audience, children; however the appeal was not just limited to children, teenagers also took an interest in the series. As well as the various transformations and combination gimmicks, each characters unique profiles captured the hearts of many. The unique characters are a fundamental element when talking about the Transformers. Thrust has emerged as the new Masterpiece from the diverse cast of characters.
Within the Destron army, Thrust is one of the Aerial Warriors who appeared as one of the new Jetron’s mid series in “Fight! Super Robot Lifeform Transformers”. Brags that he is the strongest jet fighter in the galaxy, yet in times of crisis he is a coward. His instantaneous speed however is the best out of all the Jetrons, with the accompanying shockwave having enough power to destroy nearby buildings.
This product is based on the design seen in the animated series, incorporating the detailed design of the original toy. Although the base model is the same as the previous Jetrons, the characteristic wings with the vertical take off fans completely changes the appearance making this stand out from the other Jetrons. Adding to the realistic jet aircraft, air brakes are included in the airframe with detailed engine blocks underneath. The robot modes face has a unique expression, characteristic of Thrust which will actively add to the imaginative enjoyable play. 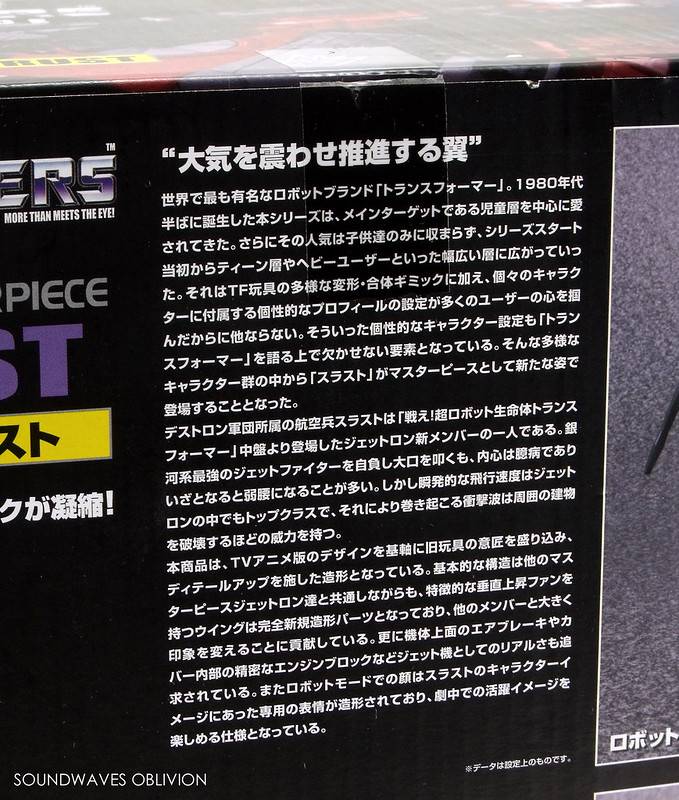 View the full gallery here on Flickr.
Posted by Jeremy Barlow at 09:55