After completing their run of Takara's initial Diaclone figures in 1983 (see Part 2), the following year in 1984 GiG released their version of the Diaclone Car Robot line up. "Car" in Italian translates as "Auto", so these releases were renamed "Auto Robot", the name Diaclone was removed and instead they were re-branded under the name "Trasformer".

Early on in the collectors scene in the late 90's, early 2000's these releases were largely ignored, being seen as cheaper versions of the original Transformers, especially when their accessories were replaced by the safety "mushroom" missiles. Now they are highly collectable and the prices to own them are going up and up.

Unlike the Takara's Car Robots, GiG's Auto Robots do not come with the Inch Man drivers; the only exception being Powered Convoy. The Auto Robots also came with the original Japanese sticker sheet.

Below are the all the figures and their variants released under the Trasformer Auto Robot line:-

The Countach LP 500S was released in 2 variants, red or yellow. The yellow Countach was also released in Series 2 of Joustras Diaclone line in 1985.
The police car version of the Countach LP 500S was not "officially" available in Italy however it was released around 1985 in the same box as the yellow / red Countach and it even came with the Diaclone Inch Man. This Italian release was without the Kanji text (which translated as "Metropolitan Police") from the side of the vehicle mode.

Released in 2 variants - red or yellow.

Much like the Japanese release the Fairlady Z was released in both blue and grey. The grey version however was identical to Hasbro's Bluestreak, being completely grey whereas the original Japanese release had a black bonnet and roof.

The Diaclone name was removed from the police badge factory applied stickers - just like the Transformer version.

I've seen several GiG Porsche 935 Turbos with identical copyright stamps to the Transformers version (Takara.Co.LTD 1980-1984 Japan), however there may well be earlier variants identical to the Japanese version as there is with the Joustra Diaclone version of the Porsche 935.

There were 2 variants of the Ambulance release, the first with the Kanji sticker (消防署) just like the Japanese version and the second version was without, just like the Transformers release.

Although the "Marlboor" version of the Lancia Stratos did not see a release in Italy, the Alitalia version saw 3 variants released. Version 1 was identical to the version released in Japan with 539 on the roof and the "Britax" logo underneath the 539. Version 2 was identical to the Transformers version, there was a blank space on the roof (for the Autobot logo) and the "Britax" logo was removed. Version 3 had a blue tint to the white paint used on the roof canopy. This variant was also released in the early Transformers line.

GiGs release of the 4WD Hilux omitted the yellow version, only being released in black and blue.

GiG did not release the black version of the Honda City Turbo, only releasing the blue and red version instead. Interestingly, the version released in 1985 was the Transformer version complete with a Transformers sticker sheet, additionally this version also came with the small scooter which was absent from the Transformers release.

Near identical to the Japanese version and harder to find, GiG's version retains the "Diaclone" name on the factory applied stickers. Without a box the main way to tell GiGs version apart from the original Japanese release is that the GiG version has the copyright stamp underneath the cars bonnet (being stamped: "Takara.Co.LTD Japan 1980-1982") which happens to be the same as the Transformers version. The Japanese Diaclone version has "Takara Japan" stamped on the back of the waist, the GiG version blocked this text out.

Previously only released in red or blue in Japan, GiG's version uses the green version released in the Transformers line as Hoist. The Diaclone "Wrecker" sticker is retained on the GiG release. The Wrecker text was removed from the Transformers releases however there are a few examples of Hoist with the Wrecker sticker, common on the Japanese release of Hoist.

GiG released the black version but also the red version which appeared in the Transformer line as Ironhide. Takara also released the red version of the Cherry Vanette in the Finish Diaclone line in 1984. Interestingly in the Japanese Transformers line Ironhide would not see a domestic release until 2001 and even then that was an exclusive reissue.

The GiG version retained the factory applied Kanji text sticker on the cab which translated as "Fire Department", however this is closer to the Transformers version of Inferno as the "head connector", which was chromed in the Japanese release, was unchromed black plastic. 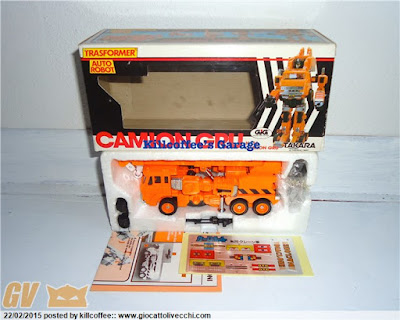 Just as GiGs Camion Pompieri, the "head connector" is black plastic like the Transformers Grapple release instead of chromed like the Japanese Diaclone version.

Battle Convoy (Optimus Prime) never saw a release in Italy however the red cab was a variant included in GiGs Camion Convoy Portauto release. Like the Japanese Diaclone version this came with "Super Buggy" and the yellow Diaclone Inch Man. Interestingly the red cab version was also released in the Japanese Diaclone line.
The following 3 motorised figures were released under the Name "Auto-Robot" but the Trasformer logo was not present on the boxes. Technically these are not "Trasformers" but I thought I'd include these oddities as they are also called Auto Robots. These figures also originated from different toy manufacturers in Japan, not Takara.

Article Number: No.36033
Licensed from Japanese toy company Yonezawa and originally known as Daijim Robot, the history of this mould is covered in my Grandstand Convertors Betatron article. As with the above Datsun robot this was licensed by Shinsei Kogyo Co. Ltd. this remote controlled robot was available in 3 colours, red, blue or black.
Posted by Jeremy Barlow at 14:20