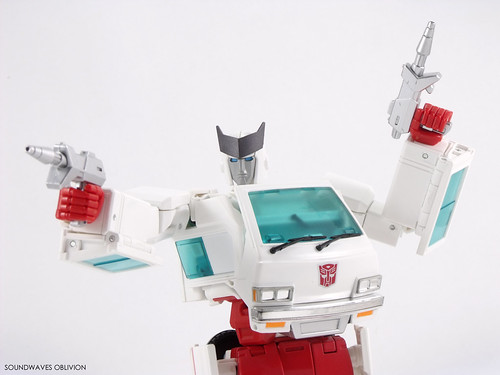 Profile (Translated from the Trading Card)
MP-30 Cybertron Medic / Ratchet
Function: Medic
Motto: “You break it, I'll remake it.”
Profile:
Cybertron Medic Ratchet is a skilled technician and doctor responsible for repairing both his companions and their headquarters. Has a kind and gentle personality but can occasionally make harsh remarks, but this is because he worries about his friends. He is also an excellent warrior, capable of handling weapons as well as hand to hand combat. Supports his comrades in every aspect, from fighting in battle to treatment.
STR...4; INT...8; SPD...4; END...5; RNK...7; CRG...8; FBL...3; SKL...10 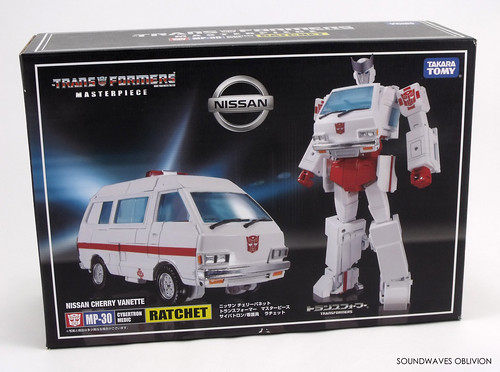 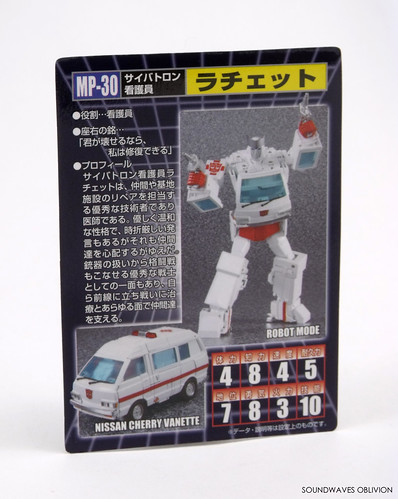 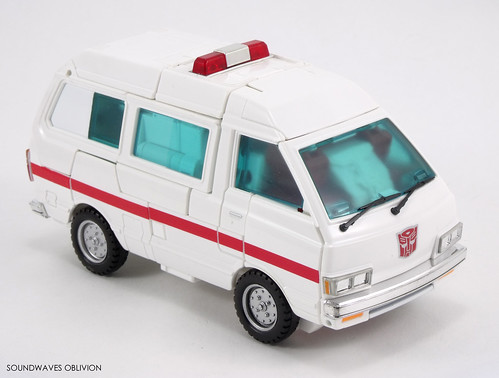 Announced in November 2015 and released in April 2016, Ratchet is a redeco & minor remould of MP-27 Ironhide. Like Ironhide, Ratchet comes with a multitude of accessories which can be stored in the sledge accessory. Ratchet features a new head and waist sculpt, and now has a retractable lightbar with a pull up slot to hold the weapons. 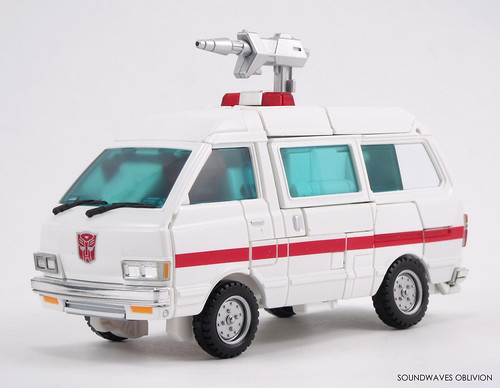 Whether this is just my version, I've found the quality is not as good as Ironhide. Certainly where you move the stiff arms, the white paint on the plastic peels off. I've also seen reports of the plastic joints crumbling at the elbow and shoulder but the way the elbow looks like it should bend, but doesn't, it may be down to people using force.
Like I've found with Ironhide, its a struggle to get Ratchet to hold his weapons without feeling like you'll break his fist. The tabs on the weapons are different sizes suggesting they are for a certain fists, however I've found the new X-Ray Blaster fits in his fist perfectly. 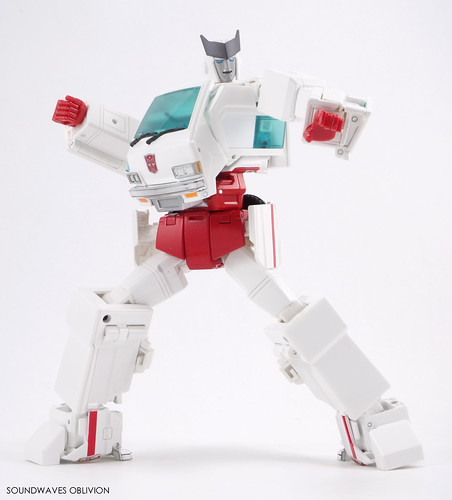 Overall its a decent figure but from a choice between Ratchet or Ironhide, I'd choose Ironhide. 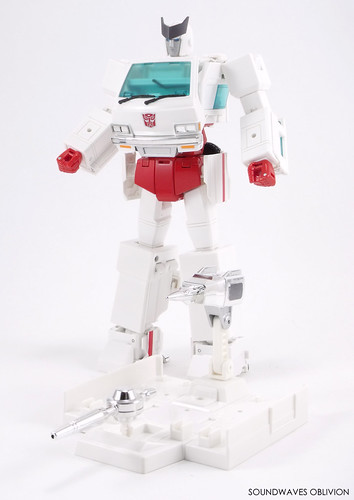 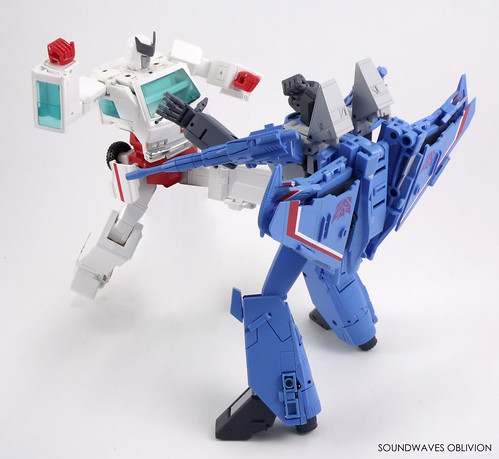 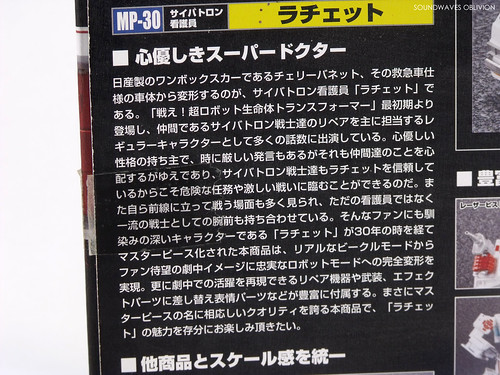 ■ The kind-hearted Super Doctor  (Translated from the back of the box)
The Cybertron Medic Ratchet transforms into the ambulance version of the Cherry Vanette, a onebox van manufactured by Nissan. Ratchet appeared in “Fight! Super Robot Lifeform Transformers” from the very beginning and was a regular character who was responsible for repairing his fellow Cybertron warriors. He has a kind hearted character but sometimes uses harsh remarks due to his concern over his friends. The Cybertron’s trust Ratchet which gives them the courage to face dangerous missions and ferocious battles. He is not just a doctor but also a skilled warrior and there were many scenes showing him fighting in battle. “Ratchet” is a character familiar with fans of the series and now he has been transformed into a Masterpiece after 30 years since the original toys release. This product features a complete transformation from vehicle mode to robot mode and is faithful to his appearance in the cartoon which is what fans have been waiting for. Also included are a wide variety of repair instruments, weapons and an alternative face, all of which allow you to recreate the scenes from the cartoon. This product boasts a quality worthy of the Masterpiece name and we hope you enjoy the charm of Ratchet. 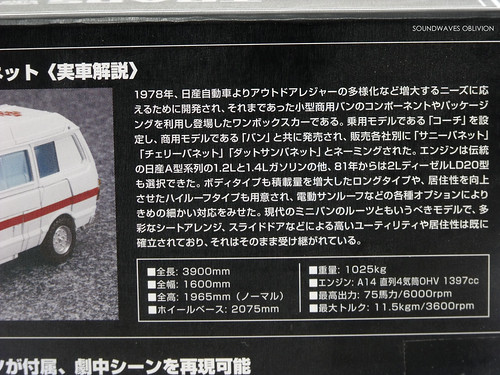 Nissan Cherry Vanette (Vehicle Commentary) (Translated from the back of the box)
Developed in 1978 by Nissan Motor Co., Ltd to meet the needs for outdoor recreation, this onebox van utilises the style and components of small commercial vans which were around at the time. A passenger model, “Coach”, was released alongside the commercial model, “Van”. The models were named “Sunny Vanette”, “Cherry Vanette” and “Datsun Vanette” by the distributors. In addition to the traditional Nissan A series 1.2L and 1.4L petrol engines, a 2L diesel LD20 version was available from 1981. Also available was a longer wheel base version with increased load capacity and a higher roof which improved comfort; various optional extras such as an electric sunroof were also available to customers. It could be said that this model is the origin of the modern minivan establishing features such as a high level of comfort, a variety of seating arrangements and sliding doors. 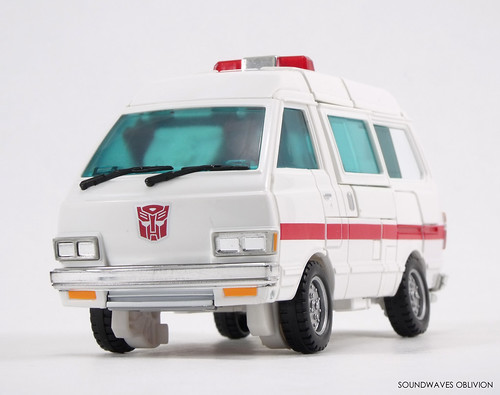 Vehicle Mode: Nissan Cherry Vanette (Translated from the instruction pamphlet)
The ambulance version of Nissan’s onebox Cherry Vanette could not have been a more appropriate vehicle mode for the doctor Ratchet. Just as an ambulance would, he transports wounded and immobile comrades. There have been many scenes where he has returned to headquarters with warriors wounded on the frontlines such as Ironhide as well as many others. When Gong was damaged and unable to transform back to his vehicle mode he insisted on walking back and was given stern words by the doctor, “Listen to the good doctor's diagnosis, shut up and get on board!”. When Powerglide was incapacitated by the Destron, Dirge, Ratchet was the first on the scene in response to his distress signal, sounding his siren on his approach. In addition to transporting Transformers, he has also transported injured humans, as well as Spike who had been injured in battle. Ratchet will save all lives without discrimination. Ratchet also takes part in combat and at Convoy’s command he transforms into vehicle mode and heads into battle. There is one memorable scene where Ratchet bravely follows his fellow Cybertron warriors into battle. 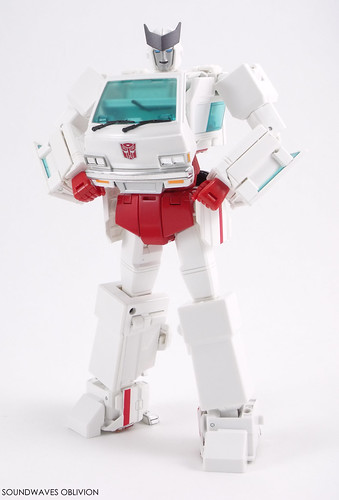 Robot Mode: Ratchet (Translated from the instruction pamphlet)
Function: Medic
Motto: “You break it, I'll remake it.”
Profile:
Ratchet plays an important role as the Cybertron’s doctor. Primarily responsible for repairing his comrades and has saved many lives with his medical skills. Although kind and gentle, he can sometimes appear severe but this is because he is concerned for his friends. Their trust in Ratchet allow the Cybertron Warriors to face dangerous missions and battles. He is also a highly skilled engineer and is in charge of the repair and maintenance of Teletran 1. He has also been Wheeljack's assistant, helping him with his various inventions such as the Dinobots and the Nova Energy Neutraliser. During these experiments he had been intimidated by Wheeljack's mad scientist temperament. A true fighting doctor, he often stands on the frontline and is skilled at using firearms as well as hand to hand combat. During the mission to destroy the Solar Needle, he delivered a spectacular flying kick to Thundercracker. As a doctor and warrior, he continued to fight to protect life but during the Unicron War he was killed with a Destron bullet. Now, the name Ratchet is synonymous with a doctor of justice and in the years that followed, it has been passed down to many warriors. 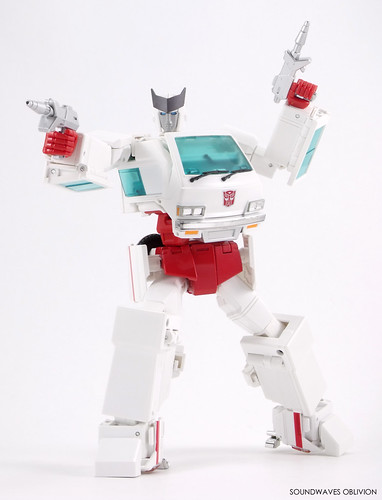 Weapon: Laser Pistols (Translated from the instruction pamphlet)
Standard weapons carried by Cybertron warriors and due to their ease of use, Ratchet has used them in many battles. 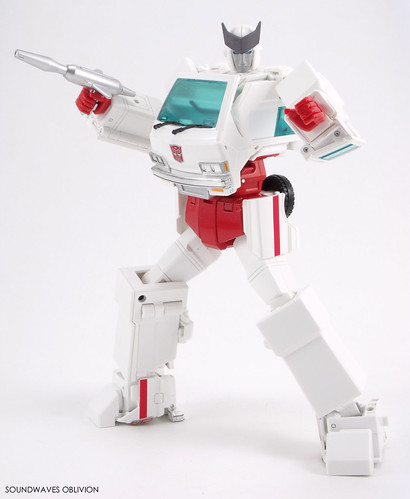 Weapon: X-Ray Blaster (Translated from the instruction pamphlet)
The X-Ray Blaster is Ratchet’s custom tuned weapon. It fires powerful electromagnetic waves which impairs his target but it is not fatal. This is a perfect weapon for Ratchet, a doctor who values life. 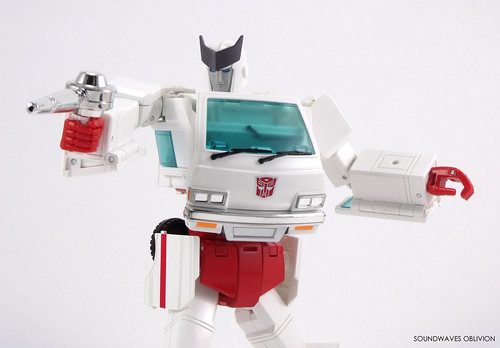 Weapon: Static Laser Gun (Translated from the instruction pamphlet)
This is the same type of gun which Ironhide favours; it can be equipped as the main gun on his repair base or it can be used as a hand-held weapon. 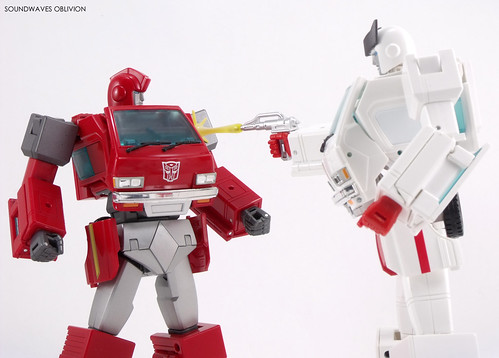 Equipment: Laser Scalpel (Translated from the instruction pamphlet)
Ratchet's favourite high performance electronic scalpel. It requires a certain amount of skill to handle but Ratchet uses it with ease, using it for many applications from repair to fabrication. 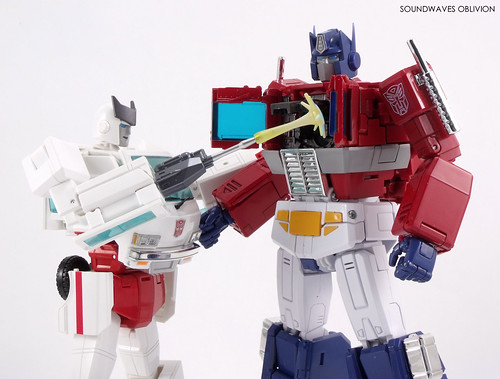 Equipment: Arc Welder (Translated from the instruction pamphlet)
Welding equipment built into Ratchet's arm. As a skilled technician as well as a physician, Ratchet uses the Arc Welder quickly with precision to repair mechanical damage. In Episode 18, “Dinobot Showdown Part 2”, it was used to repair the equipment damaged by the rampaging Dinobots at headquarters. 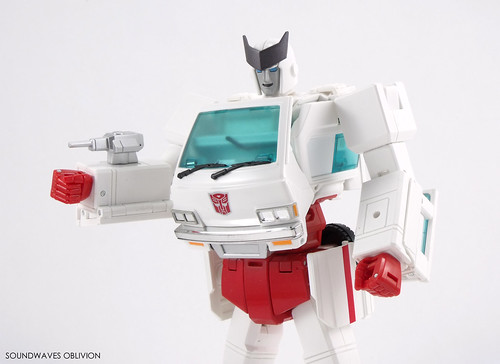 Equipment: Repair Beam Emitter (Translated from the instruction pamphlet)
Medical equipment built into Ratchet’s arm which has versatile functionality ranging from diagnosis to treatment. This tool embodies Ratchet’s role as a doctor. Often used to repair his fellow Cybertrons and in Episode 4, “Operation: Space Bridge”, Sparkplug remarked that he is like a “mobile workshop”. 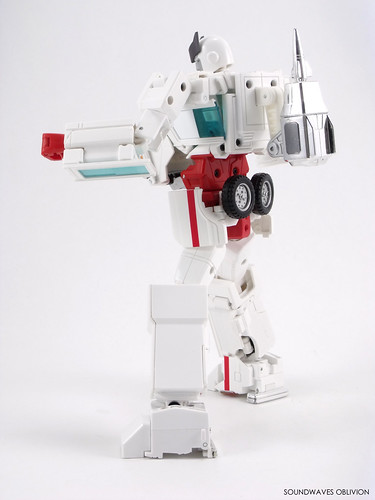 Weapon: Missile Launcher (Translated from the instruction pamphlet)
Ratchet is equipped with an anti-aircraft missile launcher which can either attach to his back or his repair base. This provides adequate defence against the Destron’s who specialise in aerial attacks. 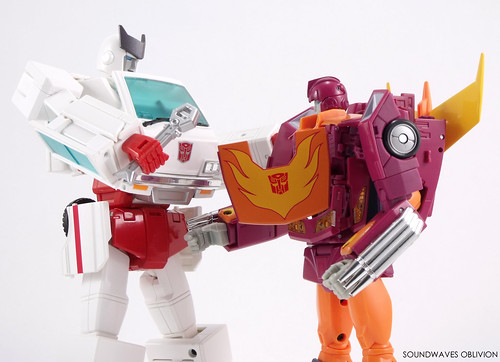 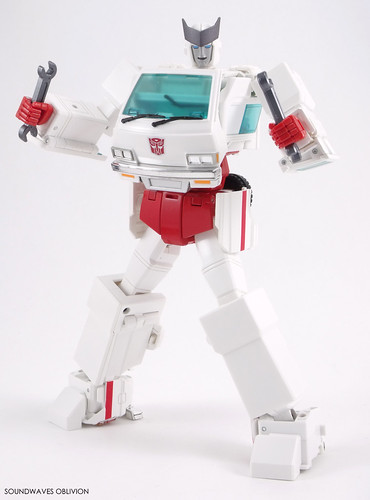 Equipment: Cyber Spanner & Magno-Wrench (Translated from the instruction pamphlet)
Ratchet's large tools used for working on Transformers. They have no unique function but can be used to repair his comrades or to maintain headquarters. 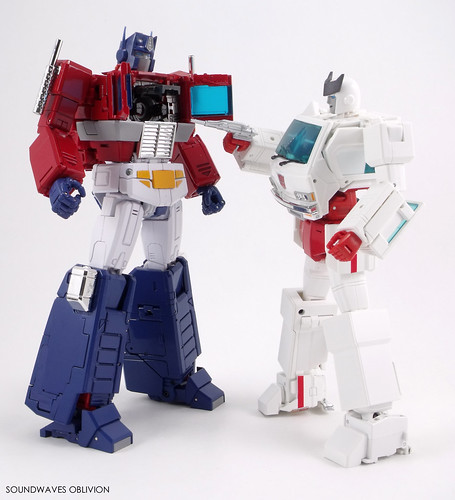