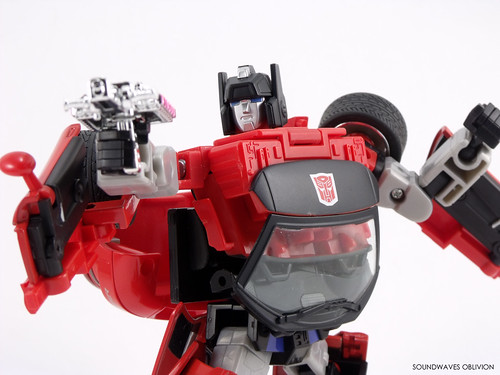 BT-02 Cybertron Warrior Lambor
● Function: Warrior
● Transformation: Dodge Viper SRT-10
The second Cybertron Warrior, revived through a special project from DaimlerChrysler’s engineering team, PVO. After a thorough analysis of Transformer technology and using their own unique conversion technology, the finished product was a high performance robot, the likes of which had not been seen before in human history. In robot mode his backpack and the repulsion panels on his legs allow him to fly for short periods of time. Because of his recklessness, a complete backup system was put in place with a dedicated spare parts production line.
● Weapon(s): Electro Pulse Gun
STR...6; INT...7; SPD...7; END...7; RNK...5; CRG...10; FPR...7; SKL...6 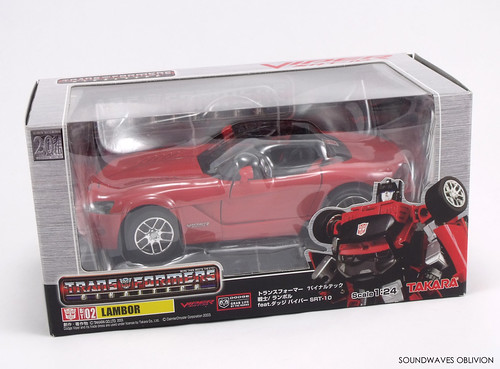 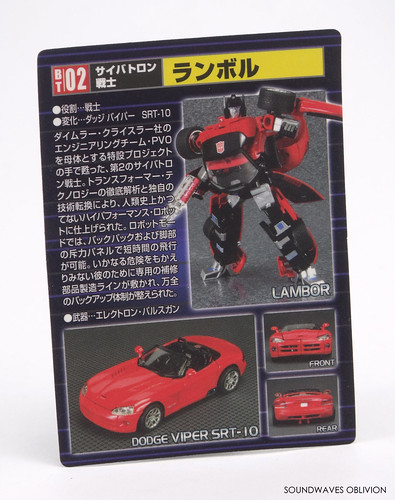 Alternator Side Swipe (Hasbro did not have the copyright for "Sideswipe" at this point) was officially unveiled by Hasbro at the July 2003 OTFCC and BT-02 Lambor was revealed by Takara the following month in August. 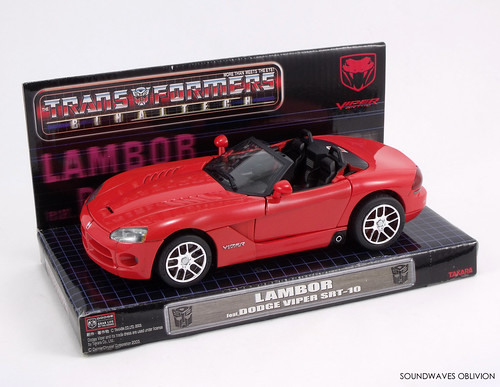 The Dodge Viper SRT-10 was initially intended to be the vehicle mode for Tracks when Takara were unable to obtain the Chevrolet license. The early design for Tracks show a different transformation with the Dodge Viper with the car doors attached to the backpack section.


However once they were given the licence after negotiations, the Dodge Viper was allocated to Lambor / Sideswipe. Given his name is Lambor I'm surprised Takara did not choose a modern Lamborghini but still the Dodge Viper is a decent enough alternative. 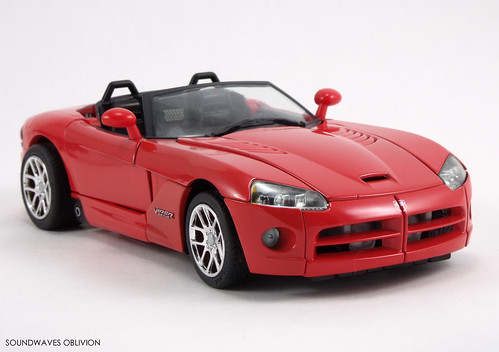 Lambor does have a fantastic vehicle mode and you certainly couldn't tell it was a Transformer if it was not for the Cybertron / Autobot logo prominently on display behind the seats. The text "SIDE SWP" is also displayed on the rear number plate. 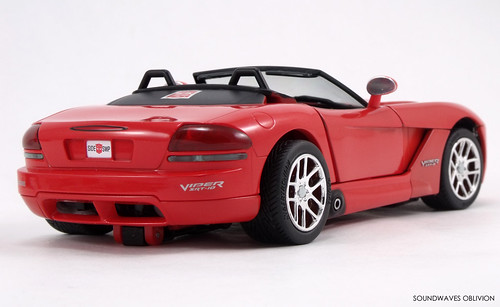 The bonnet and side doors can open and one nice detail is that on the underside of the bonnet is the sculpted Viper logo. Underneath the bonnet is the chromed engine which can also be removed and transformed into Lambor's weapon. Unfortunately the boot doesn't open on this figure. 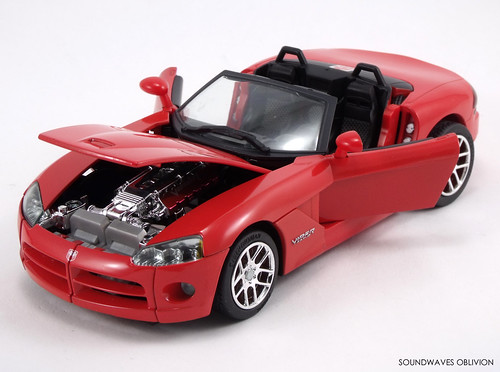 Transformation to robot mode is relatively simple and much less complicated than BT-01 Smokescreen. In robot mode you can tell this is supposed to be Lambor, mainly with the head sculpt and colouring. My main gripe with this figure is the head sculpt. All the Binaltech figures have simple looking head sculpts, the design sketches shown in the instruction booklet look great but the finished product not so much. The original G1 Lambor had an incredibly detailed sculpt so it's a shame it wasn't as detailed with the Binaltech version. 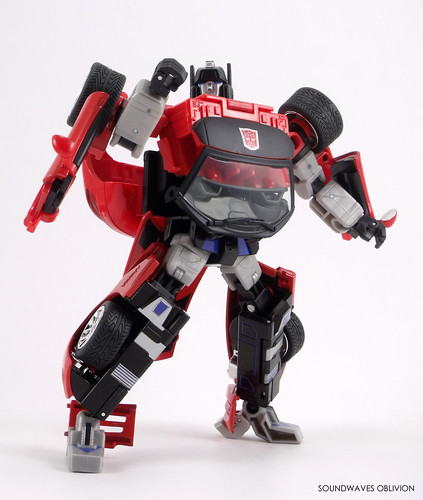 I can't remember when I last transformed BT-02 Lambor, but it must have been well over 10 years ago. Upon revisiting the figure I was surprised how articulated it is, considering I thought it was one of the weaker Binaltech figures. 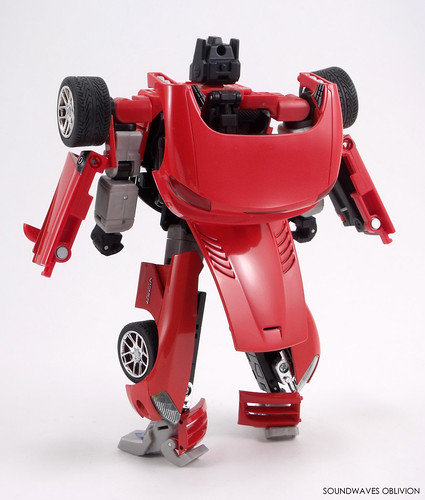 As with all Binaltech figures you need to be careful with paint chipping, especially Lambor as the bonnet hangs down behind the figure and constantly drops down due to its weight and hits the legs. The paint is durable but it will chip if you aren't careful. 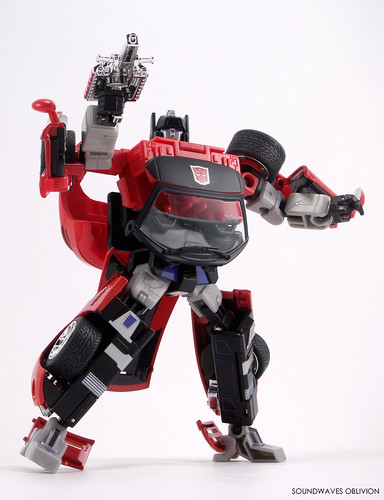 Overall it's a decent figure and relatively cheap to pick up on auction sites. As with most Binaltech figures I'd recommend the Alternator version unless the scale model car look is more appealing. 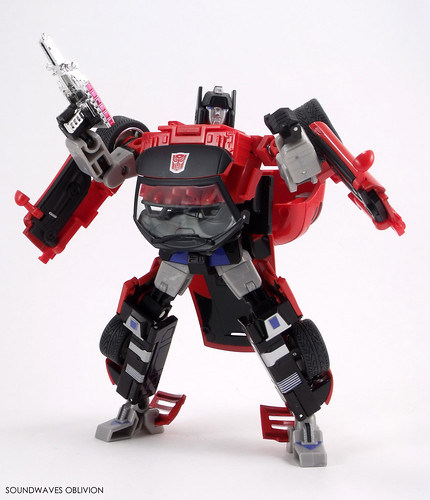 Back of the box 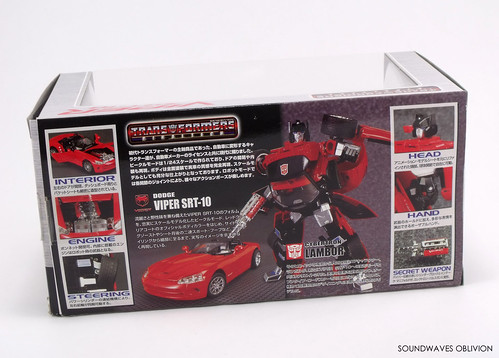 Transformers Binaltech
The transforming car robots were the core product of the original Transformers. Now they have been upgraded for the modern era with fully licensed vehicle modes. The vehicle mode is 1/24 scale with opening and closing doors as well as a detailed interior. The car is fully painted to reproduce the quality of the real car with a finish to match that of a scale model. The robot mode is fully articulated allowing you to enjoy various action poses. 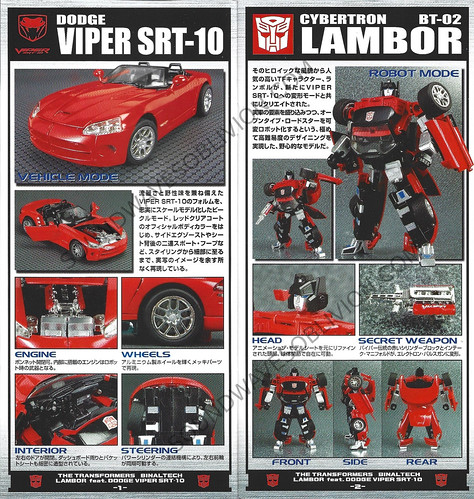 The Viper SRT-10’s sleek and aggressive vehicle mode has been faithfully reproduced as a scale model. It accurately reproduces the image of the car such as the official red clear coat colouring, the side exhausts and the double sport hoops behind the seats.

ENGINE
The bonnet can open and close. The engine mounted inside is used as a weapon in robot mode.

INTERIOR
The left and right doors open and close. The area around the dashboard and bucket seats has been finely moulded.

STEERING
The front wheels move in sync by means of a power cylinder coupling mechanism.

Lambor, a Transformers character famous for his heroic appearance, has been recreated with a new Viper SRT-10 vehicle mode. This is an ambitious model, transforming an open-type roadster into an articulated robot whilst incorporating elements of the real vehicle achieves an extremely difficult level of design.
HEAD
The refined head is based on the animation model. It is fully poseable with the use of a ball joint.
SECRET WEAPON
The Viper’s traditional red cylinder block and intake manifold transform into an Electron Pulse Gun. 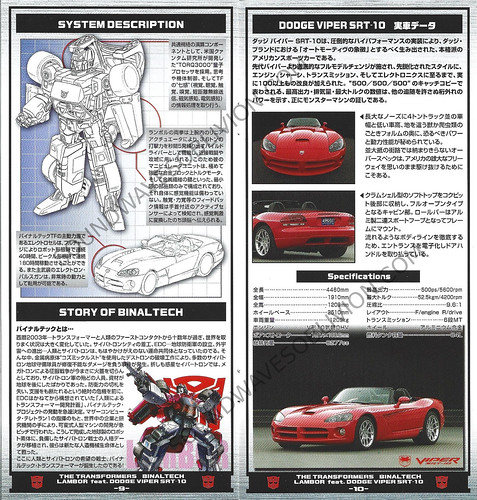 
The “TORQ 3000” quantum processor developed by Quantum Laboratories in the US is used as the common standard operating computer. It processes information for mental and physical controls as well as the Transformer's “seven senses” (sight, hearing, touch, smell, short-range radio wave transmission, magnetic sensitivity and electric sensitivity).

Both of Lambor’s fists are linked to linear actuators in his upper arms allowing them to function as piledrivers which deliver 3.6 tons of force, 5 times a second. This is more than useful in close combat and siege attacks. Because of this, his manipulator unit consists of a minimal set of parts such as extremely strong alloy blocks, torque motors and metal fiber tendons. On their own, each component has no sensory functionality. Information such as tactile and strength sensations are detected by sensors near his wrists which transmit the data directly to his brain.
The main power source of the Binaltech Transformers are electrocells, which, when fully charged can function for 40 hours continually in robot mode and 180 hours continually in vehicle mode. His main weapon, the Electron Pulse Gun, can be used as an emergency power supply.
What is Binaltech…
The year is 2003, a little more than a decade has passed since Transformers and humankind made contact. After which the world has been through many changes, construction of Cybertron City, formation of the EDC (Earth Defence Corps) and space travel. Both mankind and the Cybertrons now have an irreplaceable shared destiny. With the Destrons use of the metal pathogen, “Cosmic Rust”, many of the Cybertron Earth Defence Corps members suffered irreparable damage. Meanwhile, Megatron’s war for conquest on Planet Seibertron was about to begin and most of the Cybertrons and their supplies had just left Earth. Cut off from support, the EDC initiated the “Transformer Development Plan”, aka the Binaltech Project which had been in the works for some time. Under the coordination of the mother computer, Teletraan, the world's leading industries and research facilities began to pour their resources to develop a humanoid transformable machine at a rapid pace. The personality chips of the injured Cybertrons were transplanted into the completed robot bodies made on Earth and were reborn as new artificial machine lifeforms. The Binaltech Transformers, warriors of hope for both humanity and the Cybertrons, were born.
DODGE VIPER SRT-10 Actual Car Data
The Dodge Viper SRT-10 is an authentic American sports car which was designed to be the “Automotive Icon” for the Dodge brand with the application of unparalleled high performance. The previous generation of Viper underwent a thorough full model change with over 100 improvements to the engine, transmission, chassis and even the electronics. The maximum output, displacement and torque are represented in its tagline, “500/500/500”, which is proof that this is truly an unrivalled monster machine.

With its long nose, height and width comparable to a 4 ton truck and overall form resembling a crawling reptile, its tremendous power and dynamic performance are concealed. Being over-engineered it cannot be accommodated by normal roads but it is there to be driven freely on America’s majestic freeways.
The clamshell soft top can be stored in the rear of the cockpit, fully opening up the cabin section. The rollbar is mounted to the frame as double aluminium sports hoops. To ensure the flowing body line, the door handles have been removed and entry into the car is fully electronic.
SPECIFICATIONS
Length: 4460mm
Width: 1910mm
Height: 1209mm
Wheelbase: 2510mm
Weight: 1209kg
Bore x Stroke: 102.4×100.6mm
Total Displacement: 8277cc
Maximum Output: 500ps/5600rpm
Maximum Torque: 52.5kgm / 4200rpm
Layout: F/engine R/drive
Transmission: 6 Speed Manual Transmission
Wheel: Aluminium Alloy
Fuel Tank Capacity: 84L 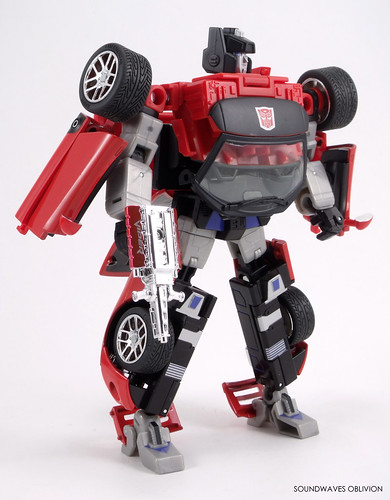