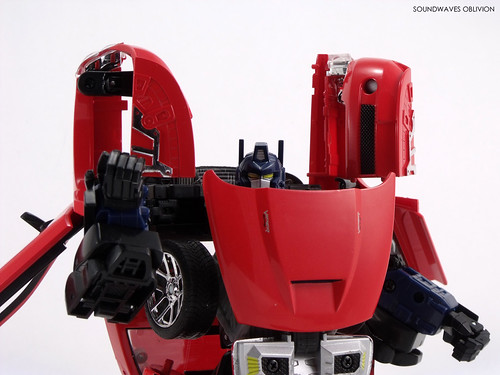 Cybertron General Commander Convoy
● Function: Former General Commander
● Transformation: Dodge SRT-10
As the General Commander of the Cybertron army, he led his troop into battle but in 2005 he was killed during the Unicron War and his spark became one with the Matrix. His body was impounded by the E.D.C (Earth Defence Command) but a kiss from Melissa, a Kiss Player, revived him. Her abilities made Convoy an expert “knife wielder”. Can Convoy bridge the divide between humanity and the Transformers? Convoy’s body was restored with a mysterious parisitech fusion which joined the Convoy unit with an Earth made artificial Transformer. The whereabouts of the other two units that composed him (Roller and Combat Deck), have not been confirmed.
● Weapon(s): Convoy Gun / Surf Blade 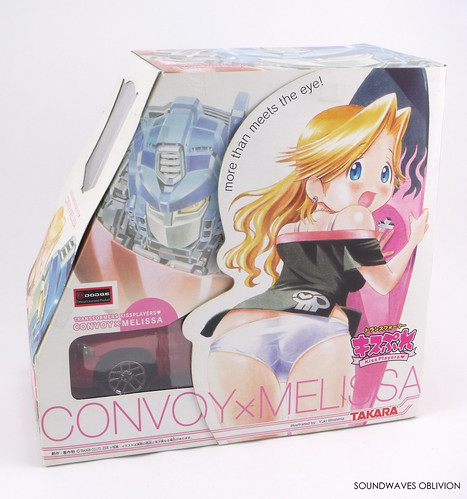 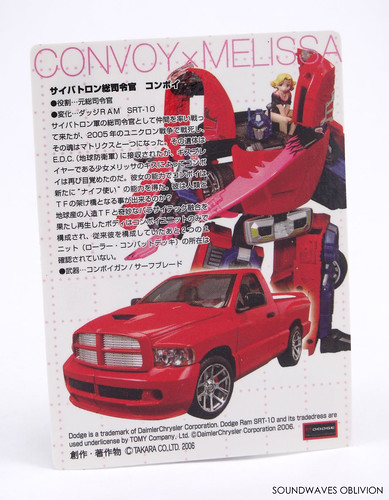 Binaltech Convoy / Alternators Convoy was a release that looked at the time like it could have been cancelled. The Dodge Ram SRT-10 was a much larger vehicle with a higher price point and was rumoured to have been Ironhide. Due to the obscurity of the vehicle in Japan, Takara insisted the character should be Convoy in order to increase its popularity. In 2005  Takara later changed the name to Ginrai (aka Powermaster Optimus Prime) and the designation number was going to be BT-17 and was due for release in 2006. However after BT-16 Skids in 2005, the Binaltech line was put on hiatus. Takara did look at releasing the mould as Black Convoy in the Binaltech Asterisk series as BTA-04 with Melissa Faireborn but this release was cancelled as well. 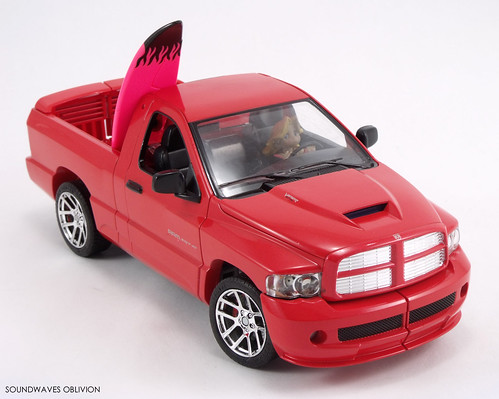 However in 2006, Takara released their "Kiss Players" toy line. In Japanese the logo reads "Transformers Kiss Play" but includes the English text below as "Kiss Players". Despite it being a very unusual series, Takara took a chance with this toy line and aimed it at a much older demographic (15+). It had an accompanying 3 part comic series published in Dengeki Daioh magazine. The series also had a weekly radio series / audio drama and ran with 51 episodes. Collections of episodes 1-37 were included across audio CD's packaged with several of the Kiss Players figures. 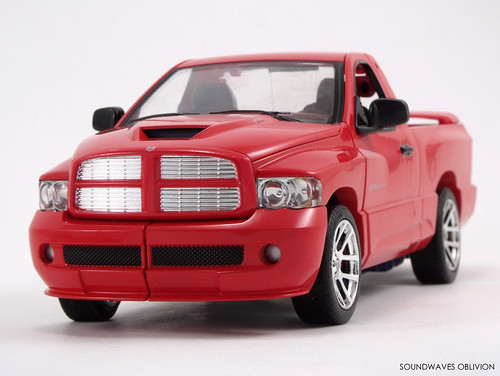 The three main figures were the 1:24 scaled Binaltech figures however these were all plastic like Hasbro's Alternator's, however they did feature a more premium paint job. Two of the figures had previously not been available in the Binaltech line but had been released by Hasbro in the Alternators series. Later in the line figurines were available as were repaints of the G1 Micro Cassettes and the Micro Change Meteor Robos who were last seen in the 1998 Beast Wars Second Transformer series as the "Egg Beasts". Miniture transformable figures were planned with larger figurines of the Kiss Players, however only one was produced (Autorooper) and the second announced figure, Convoy, was cancelled. 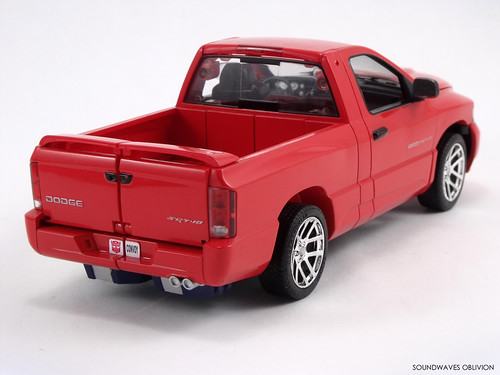 The first figure to be released was Convoy x Melissa in August 2006 for 6,500 Yen. Although there is no designation number on the box, the text "BTA-04" is embossed on the plastic insert tray.

Convoy is a large red truck with opening doors, bonnet and tailgate. As with other Binaltech figures the engine transforms into a handgun. Convoy comes with a small PVC figurine of Melissa Faireborn (known as Marissa Faireborn in the western version of the cartoon) who was a reoccurring character who first appeared in the "Five Faces of Darkness Part 3".


Melissa comes with a set of different arms and legs for interchangeable posing. If you remove the legs you can place the figure in Convoys vehicle mode. Melissa also comes with a pink surfboard which can be transformed into a sword for Convoy. 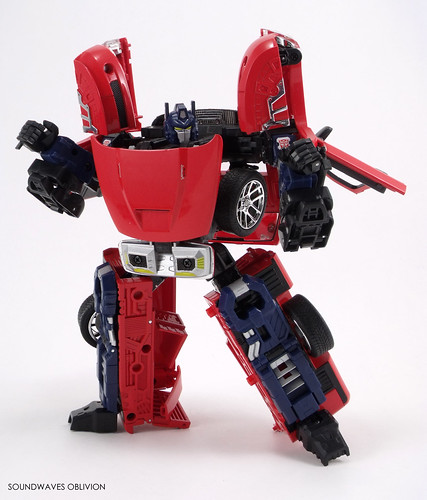 Transformation for Convoy is pretty straightforward however I did find extending the legs very difficult compared to BT-22 Convoy. The figure had been sealed in its box for 16 years and this was the first time I'd opened it which may not have helped. 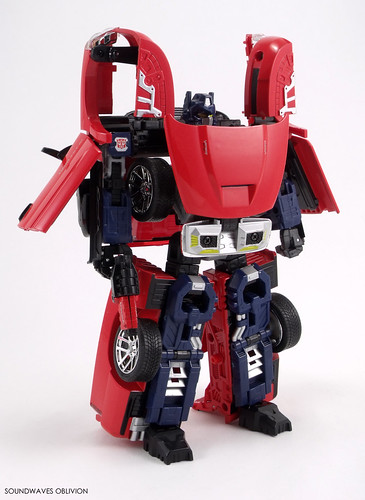 The accompanying booklet likens Convoy to his G2 appearance with the large shoulders and sword. I'm not sure if this was what the designers were going for or whether this was a coincidence considering this figure was intended to be another character altogether. 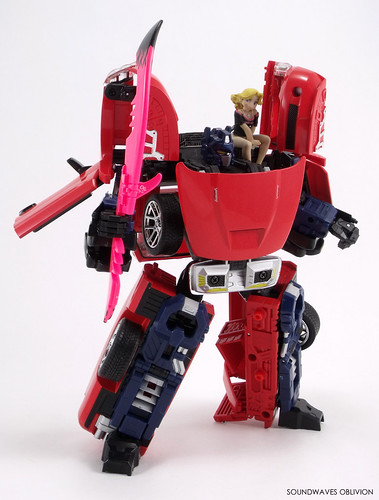 Convoys bulk hinders his articulation although you can get a few poses but not as much as the other Binaltech figures, and they aren't that posable either, certainly by modern standards. I do prefer the paint scheme of the Alternators figure as that has a more accurate Optimus / Convoy colour scheme. I find the blue colours very dull with this release but the yellow eyes are a nice homage to the original G1 figure. 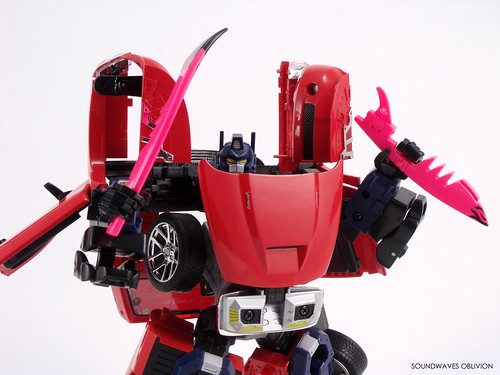 Overall for me it is a lukewarm release and the Alternators version is much better, and cheaper. 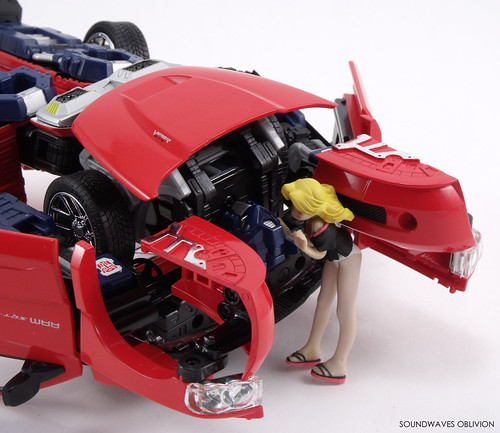 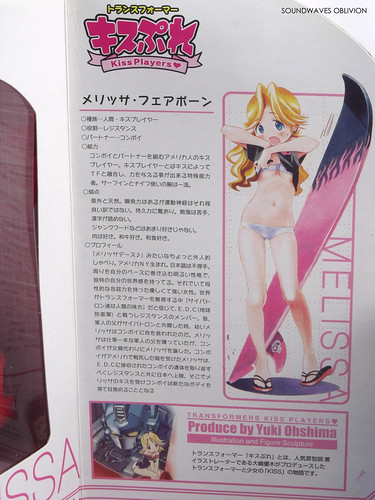 Melissa Faireborn
● Race: Human / Kiss Player
● Function: Resistance
● Partner: Convoy
● Ability
An American Kiss Player partnered with Convoy. A Kiss Player is someone with special abilities who bonds with Transformers with a kiss which grants them special powers. Her surfing and knife skills are top notch.
● Weakness
Surprisingly ditsy. She’s very nimble but not athletic and has poor physical stamina. She isn’t great at studying and has difficulty reading Kanji. She dislikes junk food but enjoys meat, especially beef and Japanese food.
● Profile
She speaks with a foreign accent “Melissa de-su♪”. She was born in North America, New York. Her Japanese isn’t that great. She has a unique viewpoint and has a happy personality, engaging with others at their own pace. She is a kind, yet strong woman with a maternal instinct. She is a member of the resistance fighting against the E.D.C. (Earth Defence Command). Despite the world viewing Transformers as the enemy, she believes that the “Cybertrons are humanity's allies.” Long ago, her father who was in the military, fought alongside the Cybertron’s and Convoy had once saved the life of a young Melissa. Melissa’s father was dedicated to his job and she hated him for that but Convoy was able to step in as her paternal influence. After hearing that Convoy was killed in battle in America, Melissa came to Japan with the resistance to retrieve his body which was being held by the E.D.C. Melissa kissed Convoy and he came back online with a new body.
Text below Melissa's profile:

Transformers “Kiss Players” is a story of a Transformer and a girl’s “KISS”. The series has been produced by popular designer and illustrator Yuki Ohshima.
Side of Box Translation 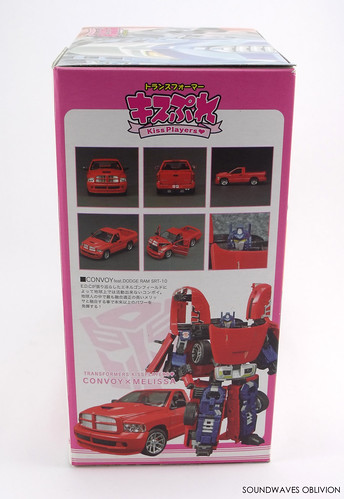 ■ CONVOY feat. DODGE RAM SRT-10 Convoy is unable to function on Earth due to the Anti-Energon field installed by the E.D.C. However, after bonding with Melissa, who possesses the greatest fusion ability out of all of humanity, he gains more power than ever before.
Back of Box Translation 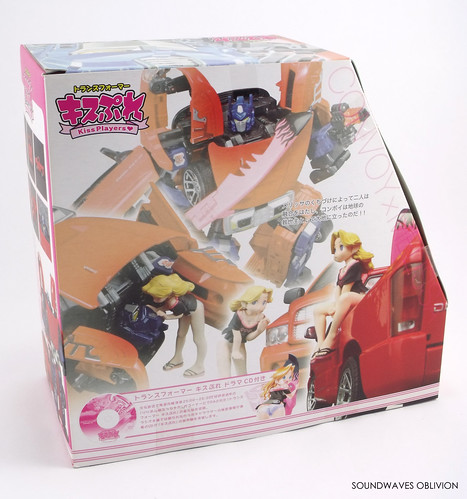 20 years ago, the Super Robot Lifeforms, “Transformers”, suddenly appeared on Earth. Have you ever met them? They come from outer space and have huge mechanical bodies but they can think, worry, hate and fall in love just like humans can.
In 2005, during the Unicron War between the Transformers, the Cybertron’s General Commander “Convoy” was fatally wounded by the Destron’s Emperor of Destruction, “Megatron”. The severely wounded Megatron was restored by the living planet, the “Interstellar Emperor Unicron”, and was regenerated into his new form, “ Galvatron”. However, “Rodimus Convoy”, the new leader who succeeded “Convoy”, entombed both Galvatron and “Unicron” in the depths of space. Meanwhile there was an incident on Earth which made humans view all Transformers as the enemy. The anti-Transformer organisation, the E.D.C (Earth Defence Command), was formed and wiped out all Transformers on the Earth. Humans and Transformers finally gave up on their cohabitation and parted ways.
Then in 2006. A strange Transformer Army, “Legion”, suddenly appeared on the peaceful Earth. The E.D.C. manufactured artificial Transformers, the “Auto Troopers”, to eradicate the threat. “Kiss Players” are girls with special abilities who can power up Transformers just by kissing them. Humans were fighting against the Transformers once again. “Convoy”, the red warrior with a new body, rose on the battlefield. Is he friend or foe!?

Melissa Setting
Melissa!? It was tough. I tried to create a non-speaking character but it was for radio so the idea was rejected… Are the M shaped bangs important? My vision of her was strengthened by the performance of her voice actor, Lyrian!


Convoy Setting
Oh! Lovely! “This is Melissa’s partner.” I almost passed out when I was shown. I do like the big proportions. The back of the figure is actually quite cute. If you look carefully you’ll notice the forearms and feet are characteristic of the original Convoy! Don’t the large shoulders and sword give him a G2 vibe!?
Booklet Translation (Page 13 & 14) 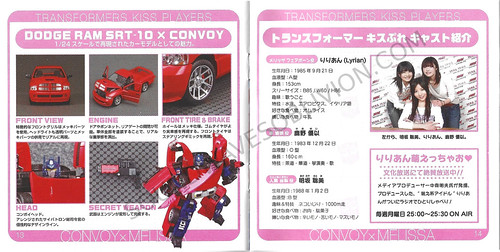 FRONT VIEW
The characteristic front grill uses chromed parts. The headlights have been realistically recreated being cast in transparent and chromed plastic.

ENGINE
The doors, bonnet and tailgate can be opened and closed. The entire vehicle is painted which adds to the realism and weight of the figure.
FRONT TIRE ＆ BRAKE
The wheels are chromed and the rubber tires recreate the sense of a real car. The front tires also have a steering gimmick.

HEAD
Convoy’s head. This has the unique design of General Commander Convoy.

SECRET WEAPON
The weapon is made by transforming the engine.