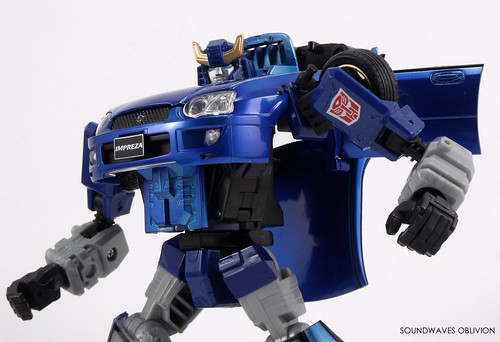 Profile (Translated from the Character Bio)
BT-19 Cybertron Bluestreak
● Function: Gunner
● Transformation: Subaru Impreza WRX
● Weapon: Ion Charged Diffusion Rifle
Streak is a warrior well known for his marksmanship and talkative nature. Hailing from the original timeline, separate from that of the Binaltech warriors, he is on a mission to save the lives of his comrades. As the existence of the Binaltech world is classified for the inhabitants of the “Official World”, only his core unit was transported to this world where he was given a Binaltech body so he could carry out local missions. Here, he became “Bluestreak”. The name is an expression of “tedious talk” as well as “blue line”. Amongst his many codenames, this one accurately represents his personality.
STR...6; INT...6; SPD...7; END...7; RNK...5; CRG...2; FPR...9; SKL...7; TTL…51 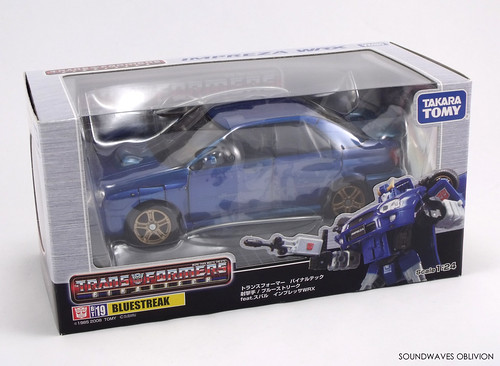 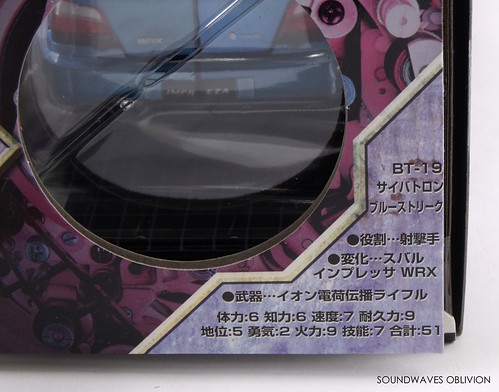 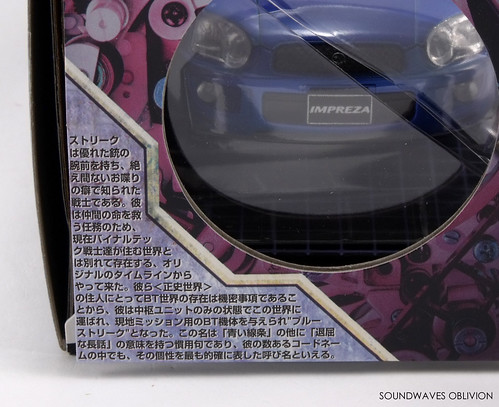 In February 2008 both BT-19 Bluestreak and BT-20 Argent Meister were revealed for a June 2008 release. This was the first time Takara Tomy would release a blue Bluestreak and it was a homage to the original Diaclone and prototype Bluestreak that appeared on the early Transformer box art and catalogues. In the Binaltech story line, the G1 / original Transformers timeline is a separate universe altogether. This Bluestreak is the G1 version who has travelled to the Binaltech universe. 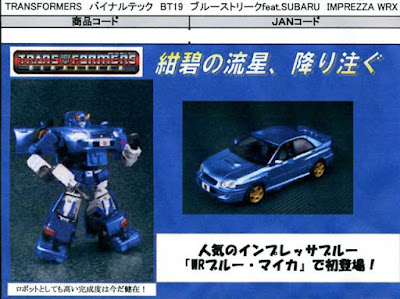 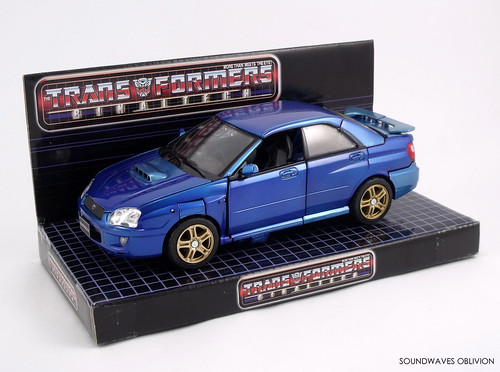 Bluestreak is a straight repaint of BT-03 Streak I've cover a more in depth look at the actual figure in the overview for Streak. Other than the colour, the only difference I can see is that the axle connecting the two front tires is no longer magnetic but is just now clipped in place (presumably budgetary reasons?). Another cost saving measure is with the presentation. All of the 4 2008 Binaltech releases no longer come with an instruction booklet with added detail or a character card. Instead a lot of the detail is printed on the box instead and the cardboard presentation stand just has the Binaltech logo and no longer has the car manufacturer logo. 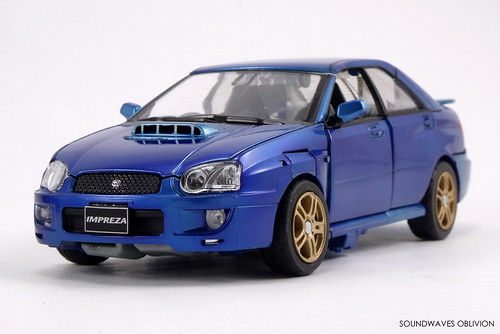 Unfortunately due to the use of this mould over time it has degraded and, at least with my copy, it doesn't hold together too well in vehicle mode, especially with the the boot / trunk section. 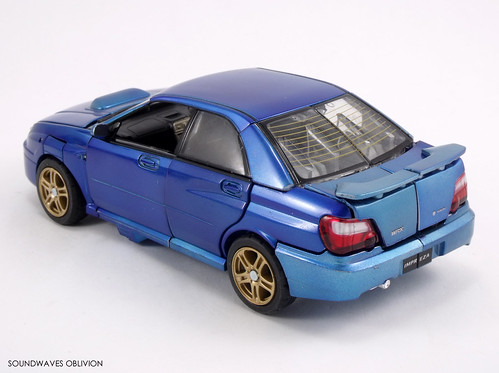 Additionally, and I'm not sure how widespread this is but I've seen many examples of the painted blue plastic sections of the car body fading colour and not evenly. It is a lot more noticeable in person than in the accompanying photographs. 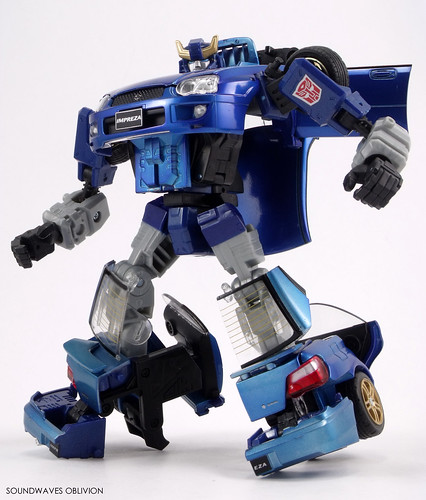 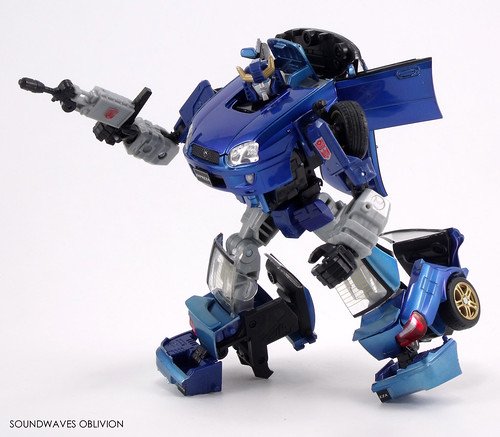 I bought my copy of Bluestreak upon release and it was kept sealed and stored in an archive box until October this year (2022) and sure enough the paint had faded. There may be examples out there that haven't faded at all as there are some plastic painted parts on mine that still have the original colour. 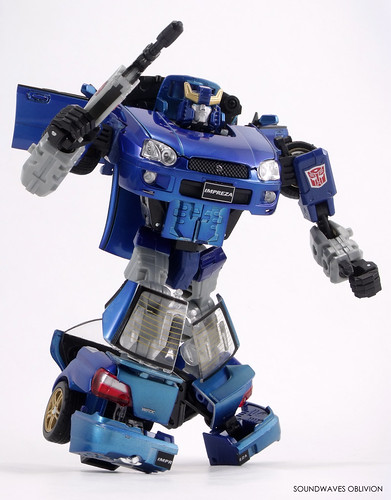 Despite my copy having aforementioned poor QC issues it does feel solid and the blue colour does suit the Impreza WRX model. 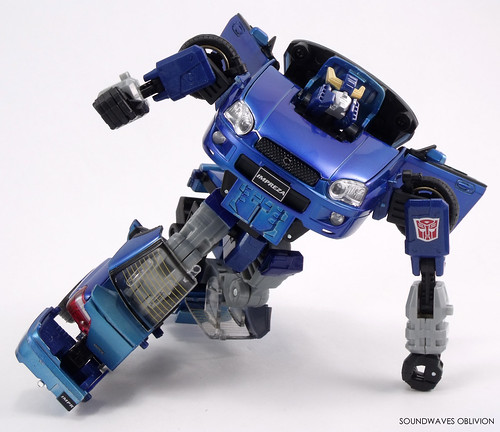 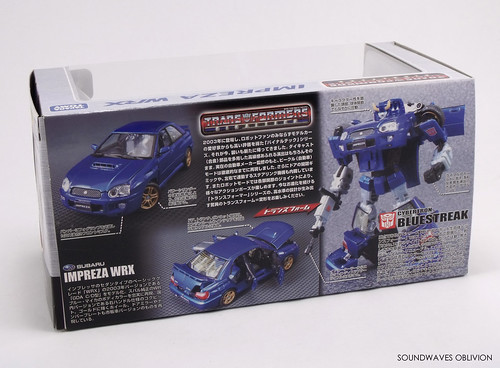 Transformers Binaltech
Introduced in 2003, the “Binaltech” series was highly acclaimed, not only by Transformers fans but also by model car enthusiasts. Now it has returned, take a look. The premium presentation with die-cast (metal) parts have of course been retained. Under the supervision of the car manufacturers, the vehicle (automobile) mode has been thoroughly reproduced. It also features opening and closing doors and a steering mechanism which is linked with the front left and right wheels. The articulation in robot mode allows you to enjoy various action poses. Enjoy the amazing transformations created by the sophisticated design of the ever evolving “Transformers” series.
SUBARU IMPREZA WRX
This model is a 2003 version of the basic Impreza Sedan grade “WRX”, the “GDA C/D Type”. The genuine Subaru World Rally Blue Mica has been faithfully reproduced. The right-hand drive cockpit, gold wheels, wing mirrors and licence plate have all been faithfully reproduced from the production version.
CYBERTRON BLUESTREAK
A Cybertron Warrior from the original series “Fight! Super Robot Lifeform Transformers”, going by the name Streak, was the best marksman. He used to be coloured silver and black but this time he has a World Rally Blue Mica body colour. This is a tribute to his “Diaclone” version which also served as Streak's original prototype. As his entire body is painted blue, his name was changed to “Bluestreak” which also happens to be the name of the overseas version of Streak. 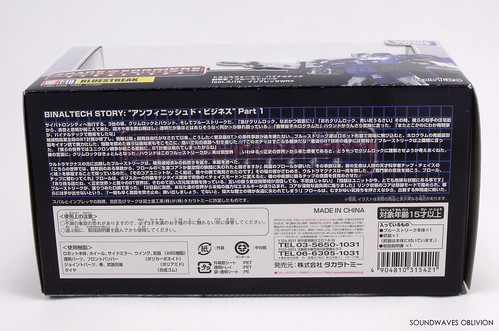 Binaltech Story "Unfinished Business” Part 1
Three cars speed towards Cybertron City. They were Grimlock, Hound and Bluestreak.
“Hurry up Grimlock but be careful!”
“Me Grimlock, quit nagging blue-butt.”
Suddenly they heard roars and screams from the residential area on their right. Something, as big as an elephant but transparent, was running amok, knocking into trees and cars.
“An acoustic quantum hologram” sighed Hound. “Another amateur inventor has been rather foolish with Binaltech technology.” Since the end of the Earth Defence Corps led Binaltech project had ended, information regarding the technology was made public and there have been no end of incidents involving Binaltech. Bluestreak and his team jumped on the scene in robot mode and neutralised the hologram projectors with their ion rifles. After settling the commotion, they went on their way.
“This body is invigorating. Hats off to you guys for advancing Binaltech technology.” said Bluestreak in good spirits. “In our world the Binaltech project was abandoned before the Unicron War broke out." Grimlock was lost for words. Hound paused a second wondering how he could convince Grimlock that Bluestreak was actually an emissary from another world, the so-called official world. Bluestreak went straight to Ultra Magnus and got down to business without reporting his code word.
“I’ve heard that the life core of Prowl from this world was lost to subspace after an incident several years ago.”
The Prowl who stood beside him nodded.
“Since the incident you have kept Prowl's body on life support by transplanting the “consciousness” of human genius, Chip Chase. Well, his life core was located in my world.” Everyone in the room began to cheer but Ultra Magnus calmed them.
“Let’s hear what the expert has to say on this matter. Prowl, switch to Chip.”
The exterior of the police car digitised and changed to the blue chase mode awakening the dormant consciousness of Chip Chase.
“That’s quite probable. The official world and our Binaltech World have very similar dimensional frequencies. It’s no wonder the subspace bands we’re dealing with are getting mixed up with one another.”
“The problem is that the life core is in a very dangerous state.” said Bluestreak in a serious tone. “Two days ago a powerful energy surge was sent from this world which caused the core to severely overload.” The core is now in a linked state, frozen in a defensive mode and no one can do anything with it."
“We must find the cause and rescue the core as soon as possible or a great warrior will be lost forever.” Suppressing his impatience, Prowl followed his comrades. 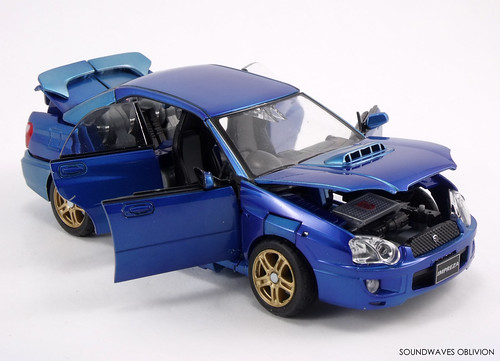