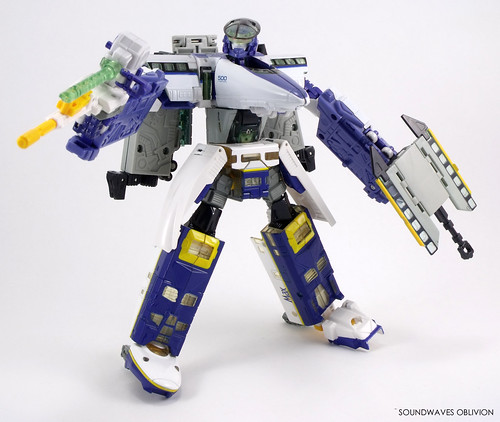 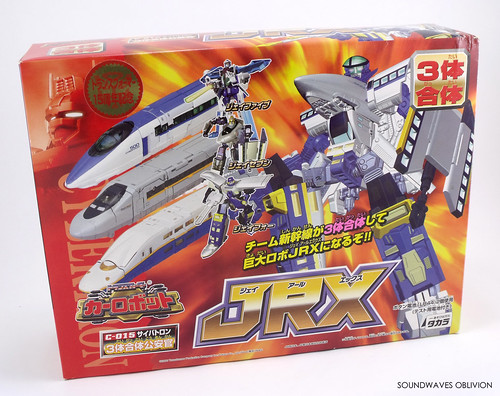 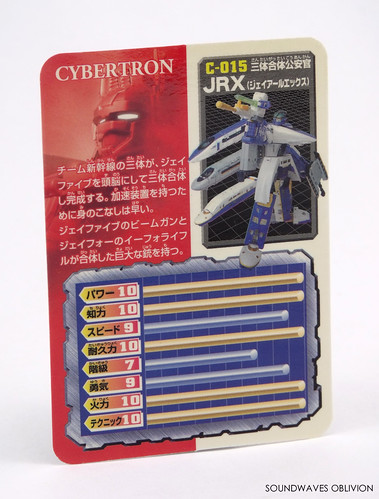 JRX was the first Car Robot set I got hold of back in 2000. It was preowned but it was in good shape and had everything included. The three trains were also available to purchase separately and were sold on blister card. The Shinkansen (Bullet Trains) are also fully licensed by Japanese Rail. 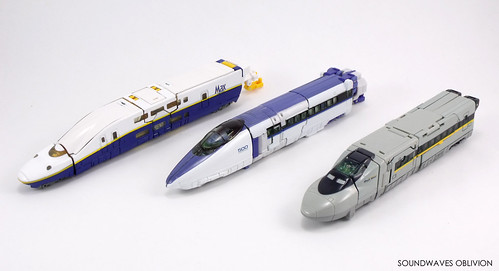 JRX stands for "Japanese Rail Express" and is the name of the combined robot. The only other three robot combiners that were released up to the time of Car Robots appeared in 1997 in Beast Wars and were Magnaboss and Tripredacus (their repaints also appeared in the Japanese Beast Wars Second series). The Beast Wars combiners were pretty good figures and had decent articulation in the combined mode. The giftset box is rather flimsy and the three figures are stored half transformed in a plastic tray in their combined forms so they are easy for you to combine them straight away into JRX. The set comes with a single character card for JRX, unfortunately skipping the individual character cards for the separate trains. 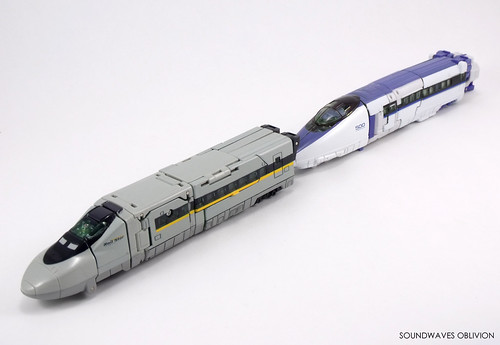 J-Five forms the arms and head, J-Seven forms the waist and backpack rocket booster and J-Four forms the legs. In combined mode JRX is very well proportioned with good articulation for a combiner. Overall it holds well together but some of the clips are transparent plastic but so far they have not failed on my version. 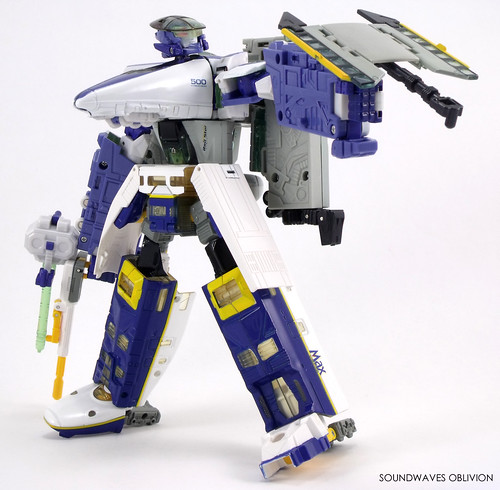 The robot mode is very stylised with an interesting head design and J-Four's train roof forming hip armour. JRX's hands also have articulated fingers which allow a decent grip on the combined gun. 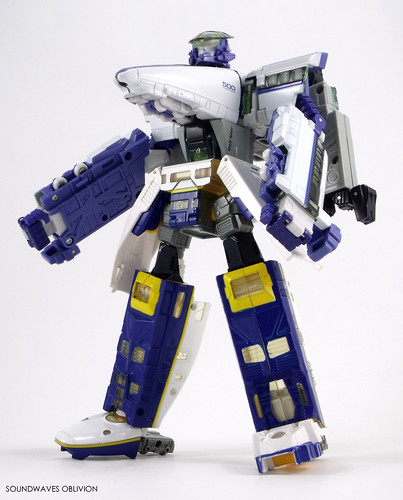 Each of the robots weapons can store in vehicle mode and act as links allowing the three trains to link up with each other. 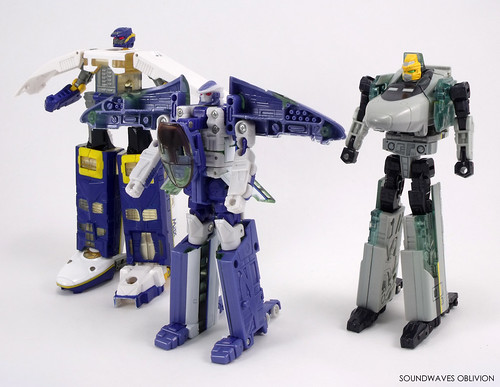 C-012 Sonic Officer / J-Five
Team Shinkansen’s chief strategist. Speaks in a gentlemanly manner and his intellect is on a par with Fire Convoy. Equipped with rocket launchers in both shoulders. He can take out enemies in one hit with his Sonic Umbrella which emits sonic waves whilst spinning.
PWR...7; INT...9; SPD...10; END...8; RNK...7; CRG...8; FPR...8; TCH...9 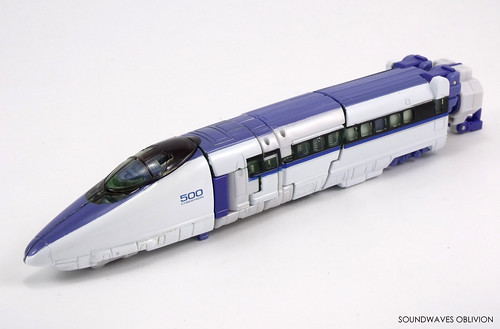 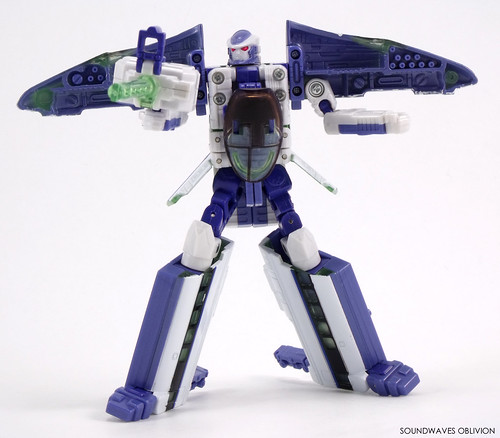 J-Five is the best figure out of the set and transforms into a 500 Series Shinkansen. The text "500 Cybertron" is tampographed on each side of the train to reference the 500 series. The train mode is very detailed with good paintwork around the windows. The nose of the train forms the shoulders and the rest of the train is the body and legs. The robot head is on a spring which pops up when you fold JRX's head forward to form the chest. J-Fives head is also shaped like the front of the 500 Series Shinkansen which is a great touch.
C-013 Sonic Public Peace Official / J-Seven
Proud of Team Shinkansen’s toughness. He is however a bit too violent and aggressive. He smokes out enemies with his grenade launcher and finishes them off with his Seven Shield. This weapon is very effective but it is only good for one shot.
PWR...8; INT...10; SPD...9; END...9; RNK...7; CRG...8; FPR...7; TCH...7 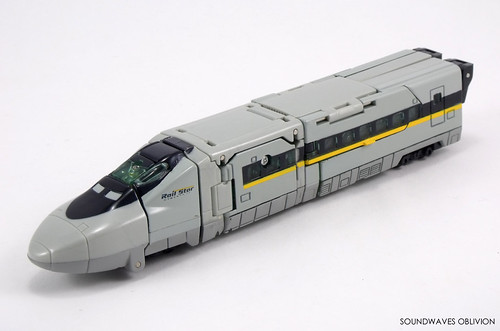 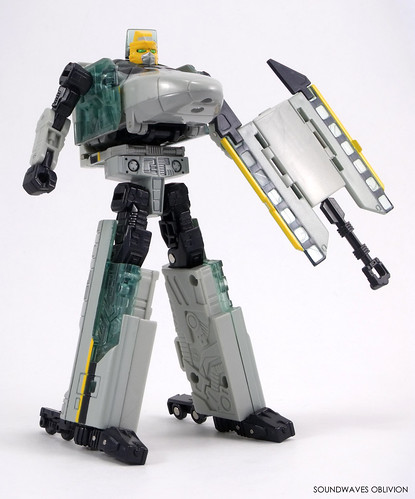 J-Seven transforms into a 700 Series Shinkansen, coloured grey with black and yellow stripes. The text "Rail Star Cybertron" has been tampographed on either side of the train. This figure is sort of a parts-former with the top section of the train being removable to form a shield for J-Seven or JRX. In robot mode J-Seven is probably the best proportioned out of the three and has great articulation.
C-014 Sonic Public Peace Official / J-Four
Team Shinkansen’s naive youth. Bright and personable, he sets the mood for the team. However he is tough on his enemies and is resistant to the cold. His thermal missiles melt the snow and his shoulders can generate light which can slice an iceberg in two.
PWR...9; INT...8; SPD...8; END...10; RNK...7; CRG...8; FPR...9; TCH...8 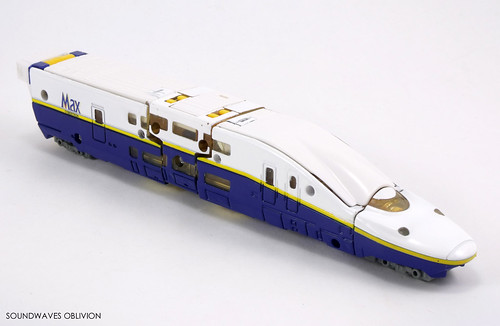 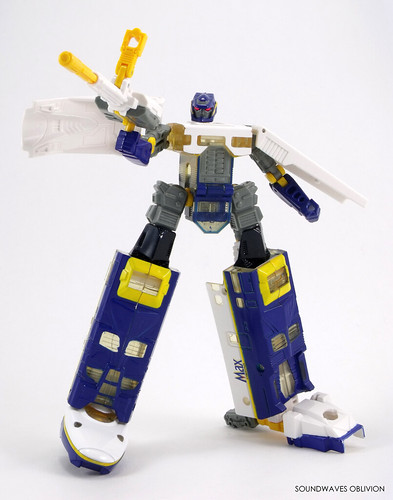 J-Four transforms into an E4 Series Shinkansen and features the text "Max Cybertron" tampographed on the side of the train. The majority of J-Fours construction is painted transparent plastic which feels quite brittle however the connection points for combiner mode are in solid plastic. J-Four's weapon plugs into the rear of the train to form a coupling but mine got stuck and it took me a while to free it which included removing the foot in order to do so. Transformation is the most basic out of the three trains and in robot mode it is the worst proportioned, mainly as he forms JRX's legs. 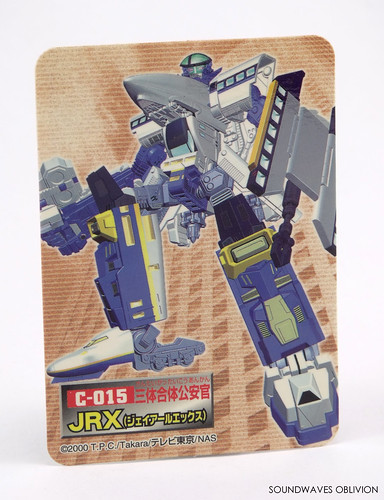 Overall JRX is a fantastic combiner and is possibly the best combiner out of the series. Caution is required with this figure as it is mainly made out of translucent plastic, but so far my version of the figure has been very forgiving for a 22 year old toy.
Posted by Jeremy Barlow at 08:30