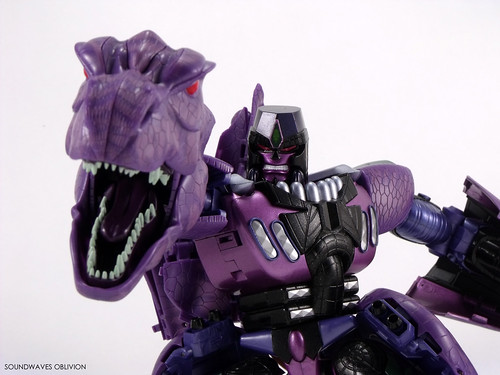 Profile (Translated from the Character Card)
MP-43 Destron Emperor of Destruction Megatron (Beast Wars)
● Function: Destron Emperor of Destruction
● Height: 2.8m (In Robot Mode)
● Weight: 2.3t (In Robot Mode)
● Profile:
The Destron Emperor of Destruction transforms into a Tyrannosaurus. He stole the Golden Disk from the peaceful Planet Seibertron in order to achieve his ambitions of conquering the universe. Megatron and Convoy wage war over the control of Energon on the mysterious planet Energoa. Contrary to his humorous tone, he is brutal and ruthless. Extremely intelligent and incredibly powerful, he carefully draws up his schemes without letting his subordinates in on his true intentions.
STR...10; INT...9; SPD...10; END...10; RNK...10; CRG...10; FBL...10; SKL...10 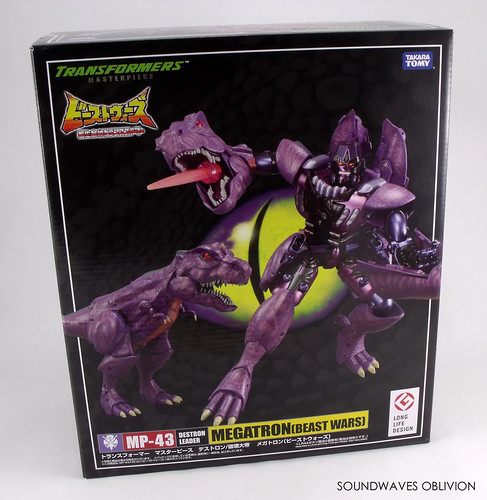 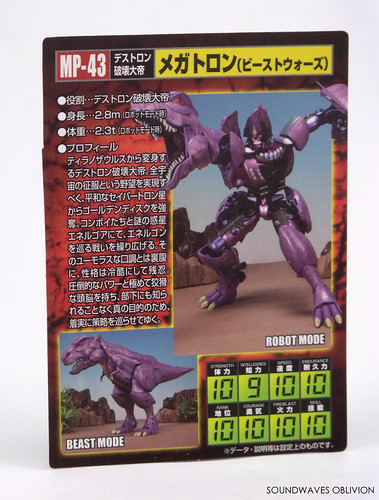 Revealed on the 9th May 2018, a photograph of a grey prototype of MP-43 Megatron in robot mode was taken just before the 57th Shizuoka Hobby Show 2018 opened. 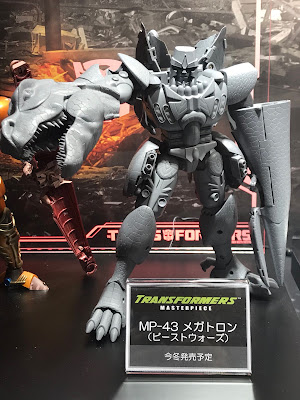 Towards the end of May, Figure King magazine #244 was released and revealed more photographs of MP-43 Megatron in both robot and beast mode. The following issue of Figure King, issue 245 revealed the figure in full colour. The initial release date was set for January 2019 with a price point of 37,500 Yen, however the figure was delayed slightly and released at the end of March 2019. 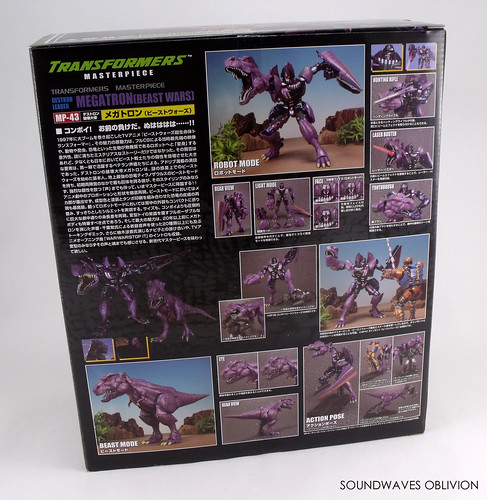 Megatron comes packaged in his beast mode and a variety of accessories but not as many as you would expect for a figure at this price point. There are two additional robot mode faces, one with the classic smile and and angry face. There is also a purple blast effect which plugs into the T-Rex mouth, a hunting rifle (from "Call of the Wild"/ “Revive, Beast Power!”), a toothbrush (from "Before the Storm" / “They’re Coming!”) and two stand adaptors or use with the stand that comes with MP-41 Dinobot. 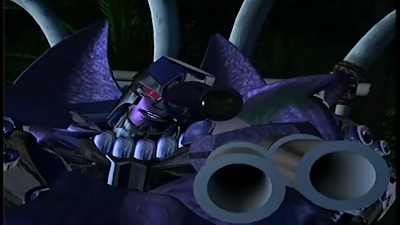 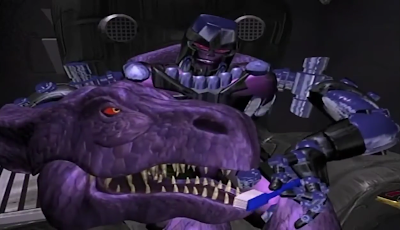 I think there is a mistake on Megatron's character card as it references Megatron's height as 2.8m in robot mode, the same as MP-32 Convoy and smaller than MP-41 Dinobot (2.9m). 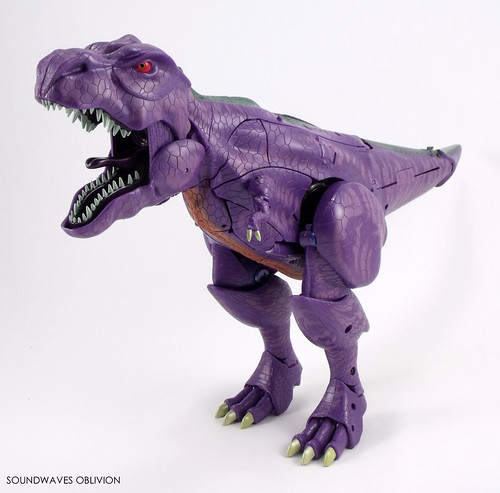 The Tyrannosaurus Rex mode is absolutely stunning, and although you can see panel lines, there are no visible robot parts. The texture of the dinosaur skin looks just like it does in the cartoon. In fact the entire dinosaur mode looks just as it did in the cartoon. 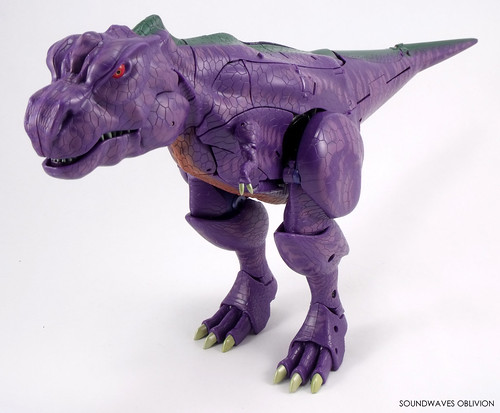 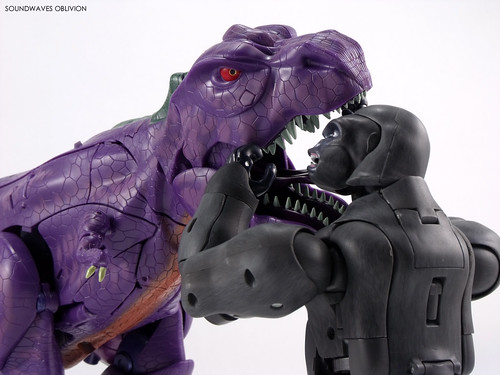 Articulation in beast mode is very limited. There is a bit of movement in the legs but the motion is limited with the hips clipped into the other panels. The small arms have a bit of movement and the head can lift up and the mouth can open. The tongue inside the mouth can also move which is a nice touch. The beast mode eyes can also move when you roll them with your finger. Luckily they are not as loose as they are with MP-50 Tigatron. 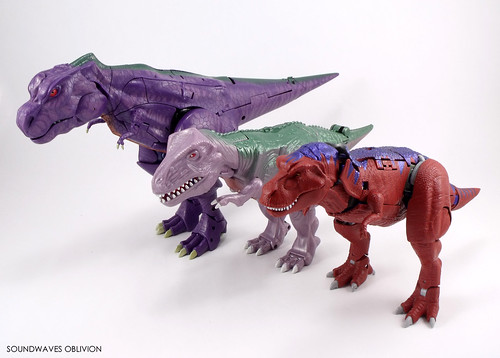 Transformation for the figure is a little scary with all the small clips and tabs but if you take it slowly there shouldn't be any issues. Another thing to watch out for is pulling the torso up on its slider as this is incredibly stiff, at least on the first transformation. The overall transformation is near identical to the original 1996 figure and in robot mode Megatron looks incredible. 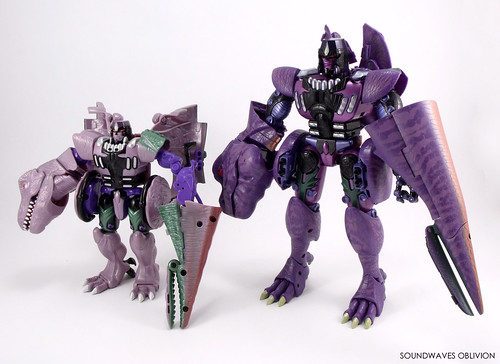 I've seen several reports of cracked crotch where the hips attach. I've had no issues with my copy so I'm not sure whether these were misassembled. A few examples were already broken in the box and others cracked when you rotated the hips to transform it into robot mode. 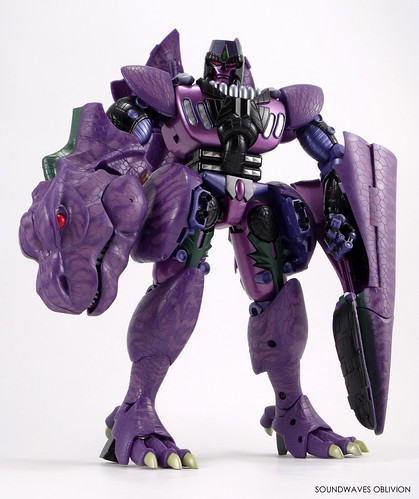 Megatron is has great articulation, albeit the joints and ratchets are very stiff. The body of the T-Rex folds up very compactly and sits on the robots back and looks just as it did in the cartoon. The tail can be easily  removed from the left arm, as it was often in the cartoon, which adds to the articulation. In fact much of the armour can be removed completely which is given its own name, "Light Mode". Unfortunately the waist is incredibly loose but this can be easily remedied and this is the only complaint I have for robot mode. 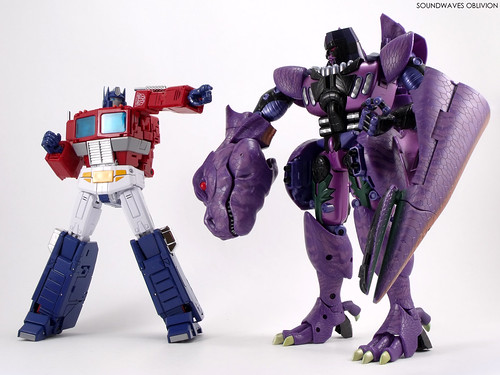 The head sculpts are fantastic and detailed with the small Destron / Predacon logo printed on the crest. I had a bit of trouble fitting the smiling face on but it did fit in the end. The robot head also takes x2 LR44 batteries which power the lights in the eyes. 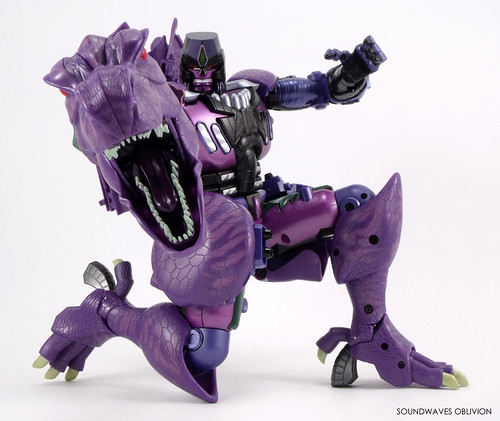 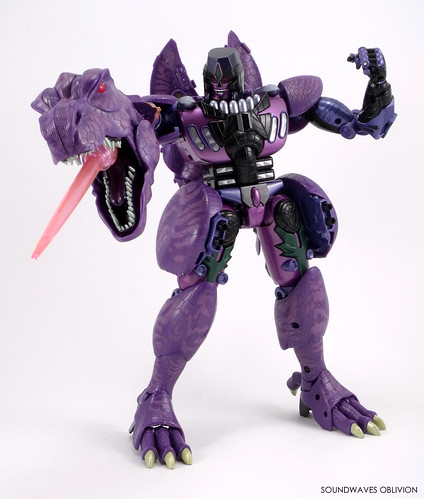 Another feature are the voice clips. These are newly recorded lines which recreate the lines spoken in the Japanese dub of the Beast Wars cartoon. The actors are Shigeru Chiba (Megatron) and Ryoka Yuzuki (NAVI-ko & Black Widow). Some of the lines are very close to the original English version but the Japanese version did have very different lines spoken. Overall there are 30 spoken lines of dialogue. In order to play these there is a battery compartment in the roof of the T-Rex mouth which takes another x2 LR44 batteries. There is a flap in the top of the dinosaur head which you lift and slide the switch to turn it on. When you press the top of the T-Rex head it plays a clip. There are 3 sound modes, Beast Mode (speech), Robot Mode (speech) and a gun blast sound effect. In order to switch between these modes you need to hold the button on the T-Rex head down until you hear a transformation sound effect. I've translated the voice clips below. It is a shame they did not include any of David Kaye's speech from the original cartoon as they later did for MP-44 Convoy with Peter Cullen. 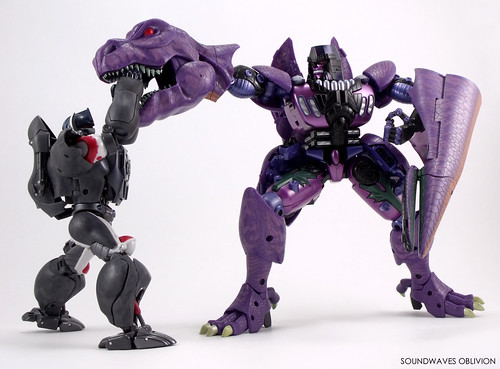 Overall this is an excellent Masterpiece figure and you can see what effort has gone into the design. Unfortunately the price means it is a hard figure to recommend. 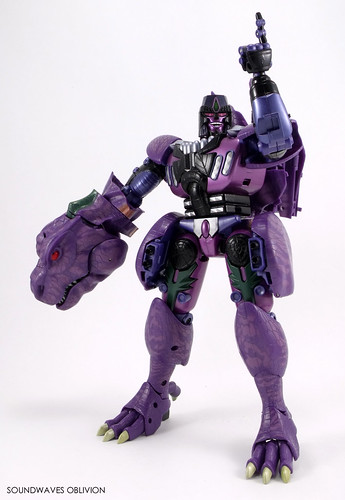 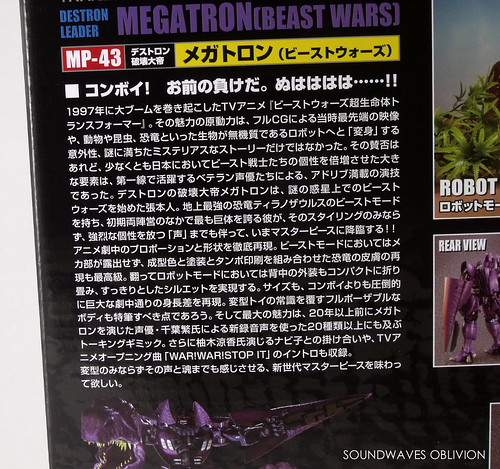 ■ You lose Convoy! Hahahaha･･････ !!
The cartoon, “Beast Wars Super Robot Lifeform Transformers”, caused a massive sensation in 1997. Its appeal was not only the state of the art animation for its time but also the fact that all sorts of creatures from animals, dinosaurs and insects “transformed” into inorganic robots. Regardless of any controversy for the series, in Japan the major element were the personalities of the individual beast warriors whose voices were ad-libbed by a veteran voice actors. Megatron the Emperor of Destruction, was the one who started the Beast Wars on the mysterious planet. He has the beast mode of a Tyrannosaurus, the strongest dinosaur on Earth and he is also the largest out of the initial cast of beast warriors. Not only does his stylistic appearance come to the Masterpiece line but also his charismatic voice!! His character model from the cartoon has been painstakingly reproduced. In beast mode there are no visible mechanical parts and the dinosaur skin effect has been created using a mix of moulded colours, paint and tampograph printing. In robot mode his back section is compactly folded giving the overall figure a clean appearance. Reproducing the height difference from the cartoon, he is also much larger than Convoy. It is also worthy of note that this fully articulated body breaks the conventions of a normal transformable toy. The biggest attraction of this piece are the 20 plus vocal performances provided by Mr Shigeru Chiba, the voice actor who played Megatron over 20 years ago. Additionally the dialogue for NAVI-ko, played by Ryoka Yuzuki, and the introduction music of the cartoon series “WAR! WAR! STOP IT” are also included. We hope you enjoy this new generation of Masterpiece which not only transforms but gives you its voice and essence. 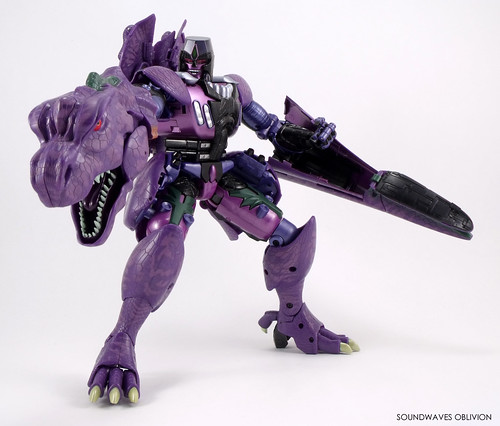 MEGATRON (BEAST WARS)
● Function: Destron Emperor of Destruction
● Height: 2.8m (In Robot Mode)
● Weight: 2.3t (In Robot Mode)
● Profile:
Megatron, the Destron Emperor of Destruction, is the largest of the early beast warriors. Seeking out the strongest animal to scan on the mysterious planet Energoa, he found the fossilised remains of a Tyrannosaurus Rex buried deep in the planet's strata. This was one of the most powerful beast modes on the planet. In beast mode he can run 70 km/h and in robot mode he has a top speed of 45 km/h. The dinosaur head on his right arm, the Tyrannoface, has huge jaws and is equipped with a Buster Cannon in its mouth. As well as being able to fire the Destron’s most powerful laser, the Laser Buster, it can also fire Laser Bombs in rapid succession as well as a Tyranno Missile projectile. The dinosaur tail or Tyrannotail mounted on his left arm is equipped with a giant pair of pincers called the Deathclaw. Additionally the armour on the the side of his legs is equipped with a Missile Cannon Plasma Buster. By being able to utilise all of these heavy duty weapons gives him the most superior firepower out of all the beast warriors in both factions. Megatron originally intended to travel through space to find the Energon he needed to conquer the universe. However Megatron had a much deeper intention which is why he broke into the vaults on Planet Seibertron, stole the Golden Disc and transwarped to Earth. In the far future the Cyberons had defeated the Destrons; Megatron vowed to reestablish the Destrons and took action. The key to his success was the Golden Disc which humans placed into the Voyager spacecraft and launched into space in the 20th Century. The disc held on Seibertron was this very Golden Disc. The beast warriors themselves came from the distant future and the disc held a secret message from the original (G1) Megatron. This current Megatron is indeed a distant descendant of the original Megatron. When the planet Energoa was confirmed to be ancient Earth, Megatron sprang his plan into action. What is Megatron’s cunning plan to rewrite history itself!? 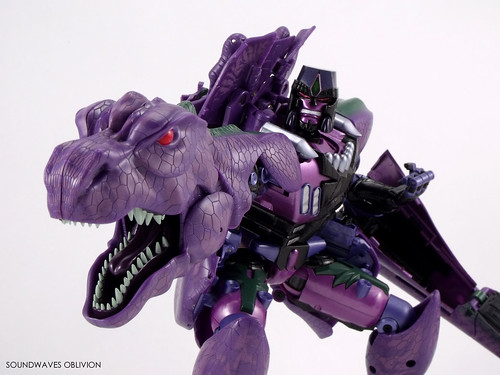 Weapon: Laser Buster
A powerful laser cannon equipped within the Tyrannoface on Megatron’s right arm. Its very positioning on the right arm and its power is reminiscent of the original Megatron’s Fusion Cannon. 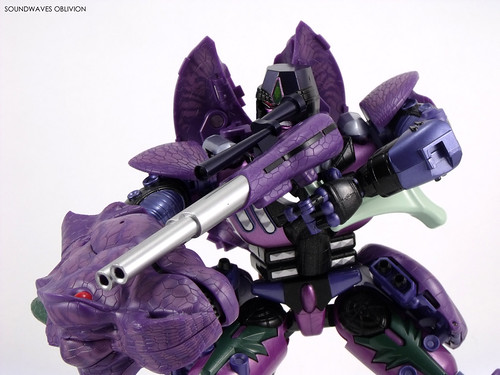 Weapon: Hunting Rifle
In Episode 19 “Revive, Beast Power!”, the Cybertrons were being controlled by their beast instincts. Megatron hunted them down and used this rifle to take aim at Convoy. 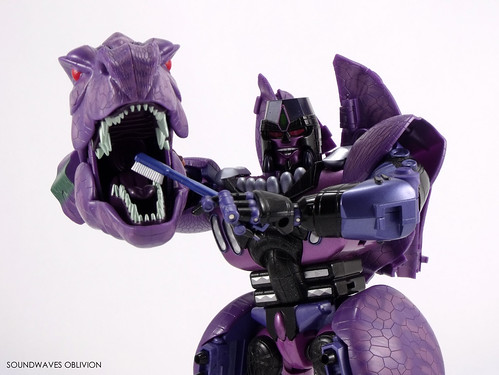 Tool: Toothbrush
A specialised toothbrush used to brush the teeth of the Tyrannoface which appeared in the 24th Episode of the Beast Wars cartoon, “They’re Coming!”. Brushing is essential to maintain healthy teeth. 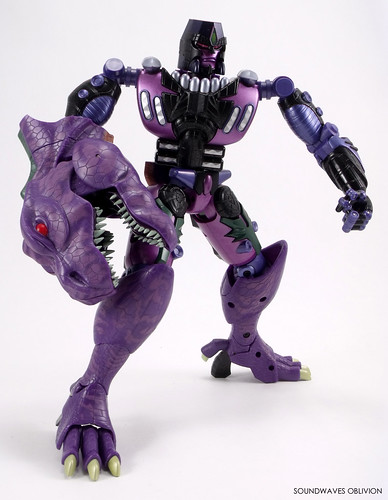 Mode: Light Mode
In the 24th Episode of the Beast Wars cartoon, “They’re Coming!”, Megatron is shown to remove the Tyrannotail on his left arm as well as removing the armour on his back and legs when he lies back to relax. He also removes his armour when he goes offline to recharge. 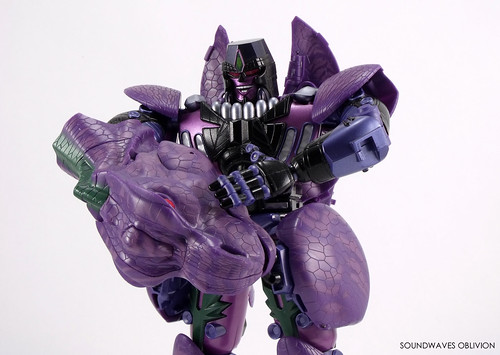 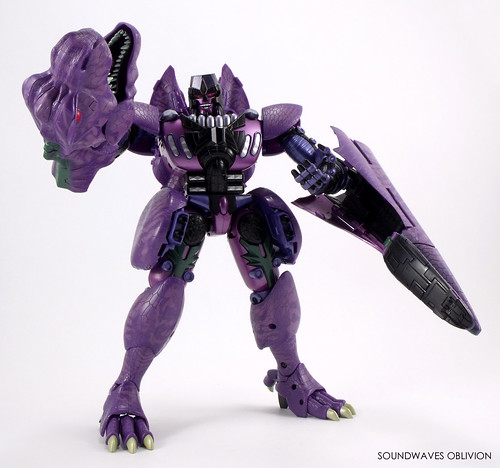