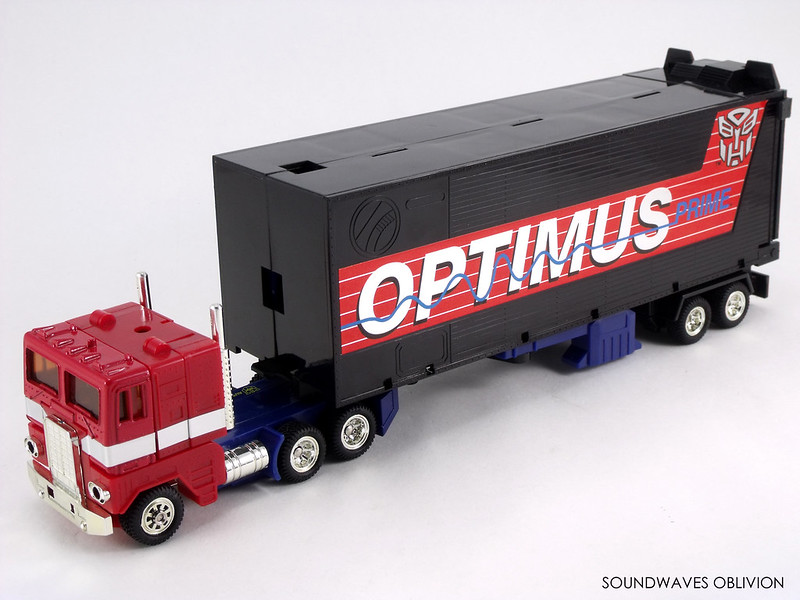 (Profile taken from the United Kingdom version)
Function: Autobot Leader
Motto: "Even one Decepticon is one too many!"
Optimus Prime is the supreme leader of the Autobots. He has an intellect that matches his impressive size, and unequalled personal resources including: the commander - the brain centre who leads the Autobots; scout car for spy missions against the Decepticons; and Autobot headquarters - an armed combat deck with a robot for servicing and attack operations. Optimus Prime is the best equipped of all Autobots.
STR:10; INT:10; SPD:8; END:10; RNK:10; CRG:10; FPR:8; SKL:10 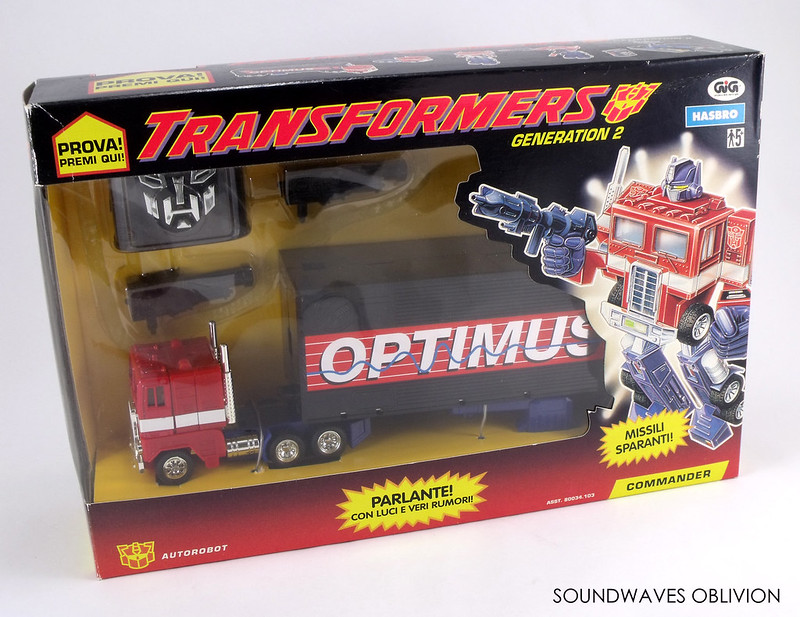 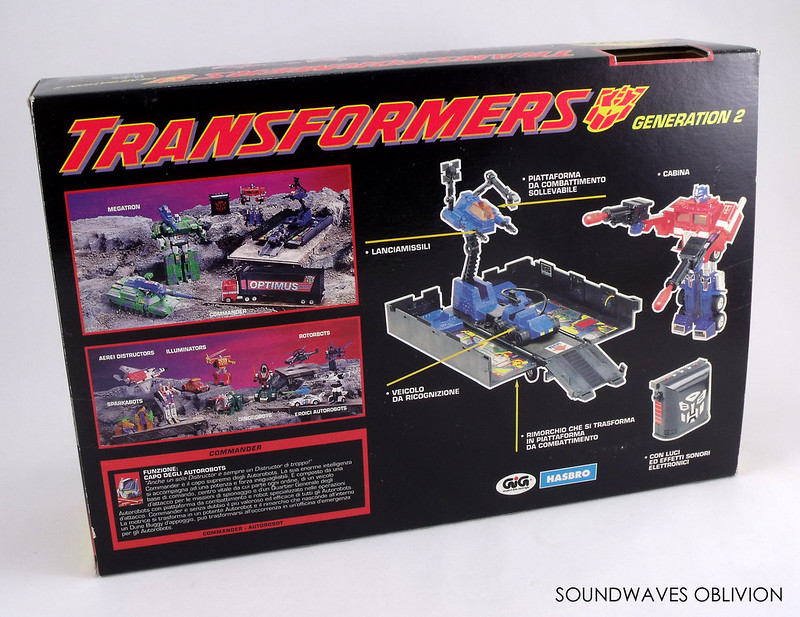 Optimus Prime was one of the first figures released in 1992 under Hasbro's new Generation 2 toy line. Recoloured reissues of the original 1984/1985 figures was a cheap way to launch the new toy line especially when the original moulds were then currently in use. From 1989 to 1995, Hasbro were releasing the original figures in China as well as the Classic (gold box) reissued being released in Europe. Optimus Prime was one of the reissues both China and Europe and what better figure was there to launch the Generation 2 line than one of Hasbro's most popular characters.

Like the other G2 figures, Optimus Prime was a redeco of the original 1984 figure but was also slightly retooled; the trailer also features a 1992 copyright stamp. On the initial releases the blue plastic was a darker blue than the G1 version, on the 1993 release and European 1994 release the blue plastic was a much lighter shade of blue. The main recolour was the new black trailer along with a new "Optimus Prime" sticker on its side. As well as coming with all the same accessories as the original, the figure came with an additional 2 missile launchers (retooled from the 1992 G.I. Joe Figure Barricade's missile launchers) and a sound box. 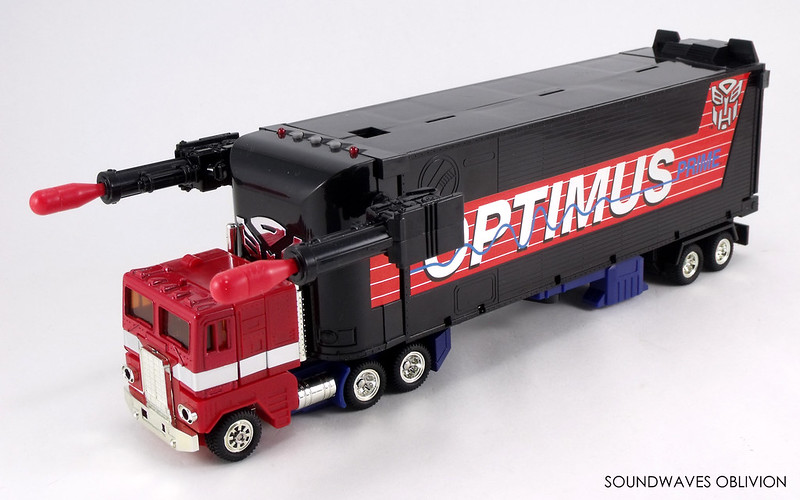 The sound box can fit on the front of the trailer and the missile launchers could be plugged in. The sound box can also slot on the back of Optimus's robot mode though this will make him too heavy and liable to fall backwards. The sound box features a chromed Autobot logo and when released it came with X2 LR44 batteries to power the "try me" function for use in stores. The LR44 batteries can be removed and replaced with X2 AA batteries. There are three buttons and three sounds. The first is Optimus Prime saying "I am Optimus Prime" in a generic voice, the next is a laser gun sound and the third is the engine noise if the tractor trailer. 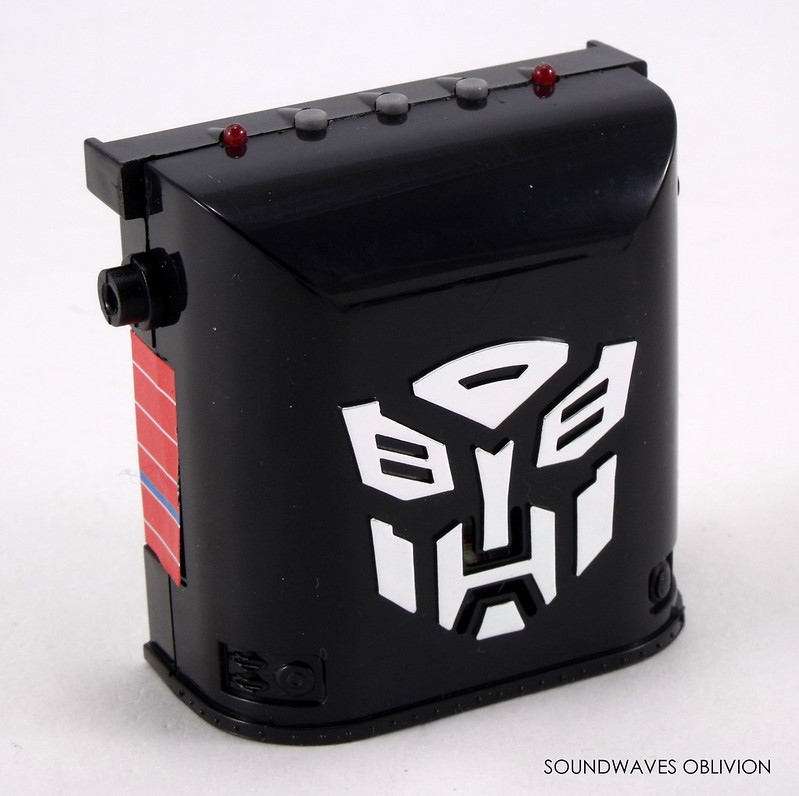 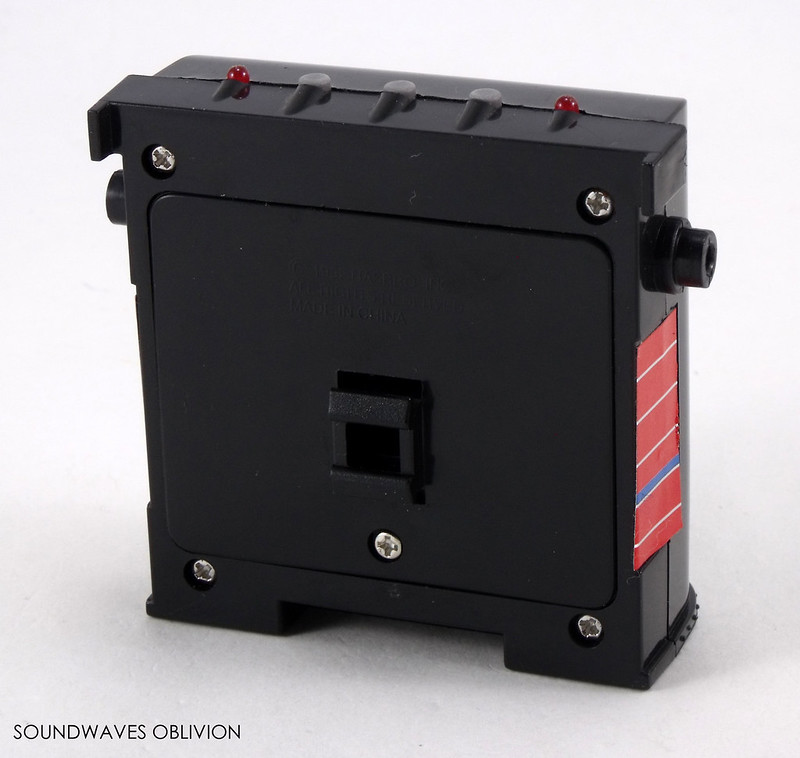 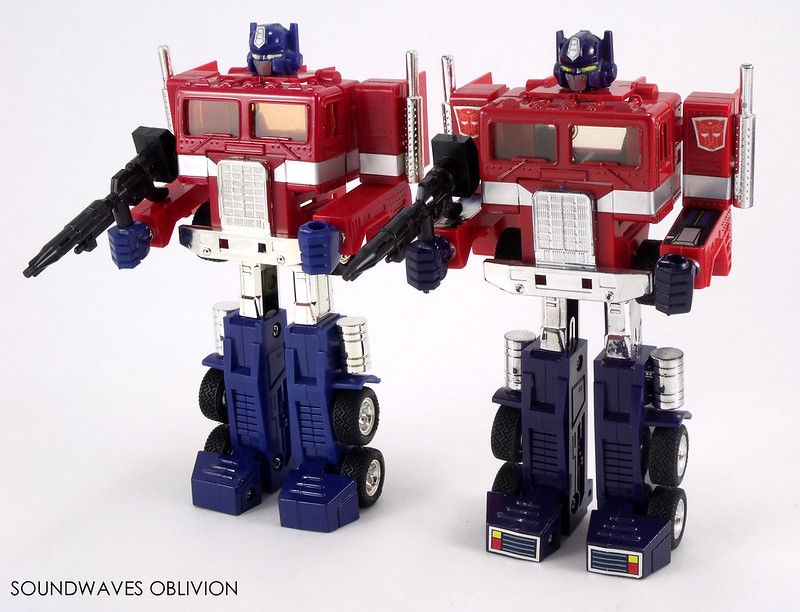 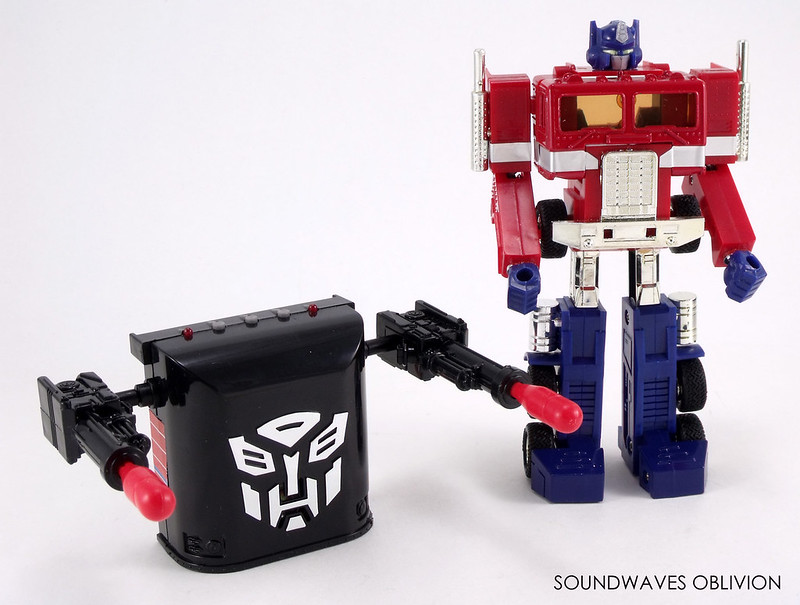 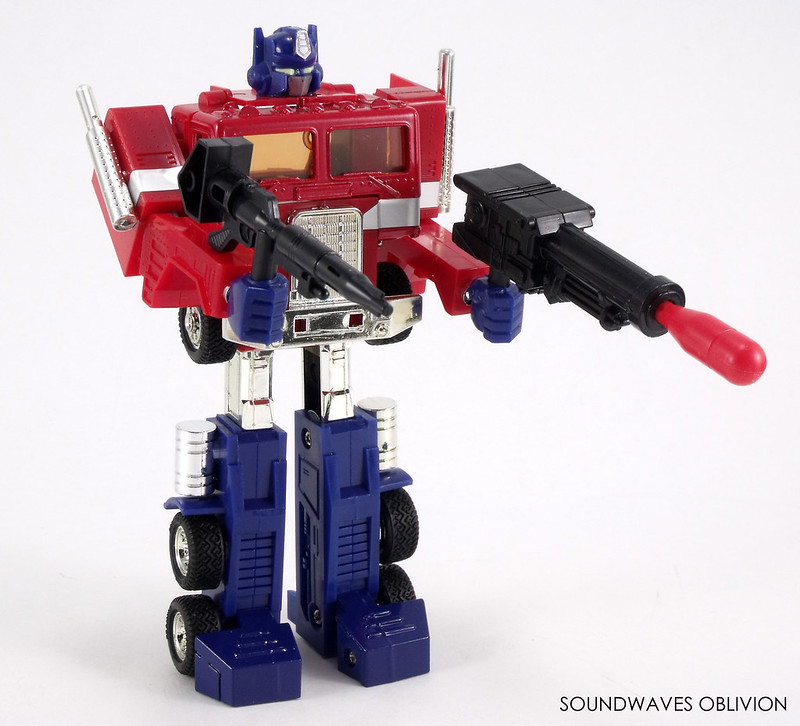 The G2 version is a good variant to pick up; the G1 Optimus Prime has been reissued many times now but the G2 version is still affordable on the second hand market, even sealed with the Italian GiG versions being the most common. The only negative thing I can pick up on this figure is that the figure does not seem as well made as the original; the red plastic on the main figure does not seem to be as good quality plastic when handling the figure with a 1984 version whereas the black trailer seems of more solid construction. 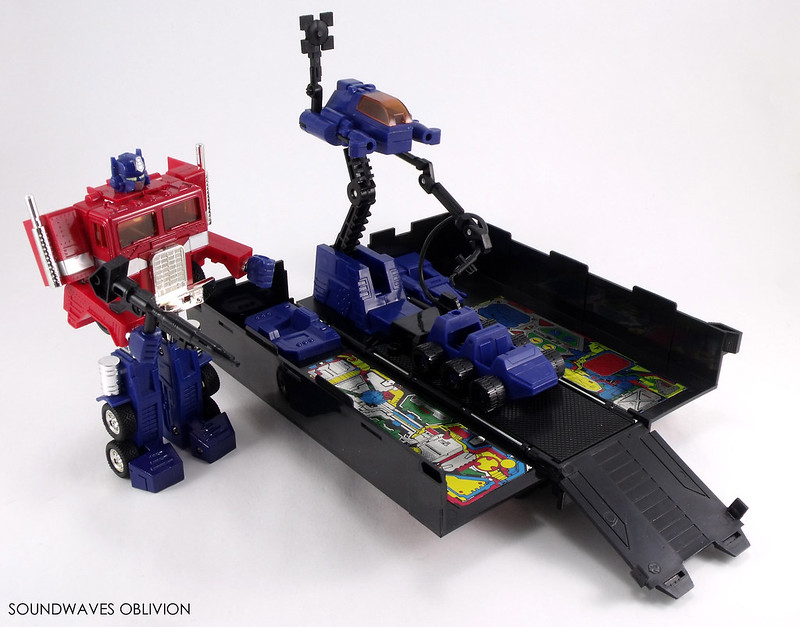 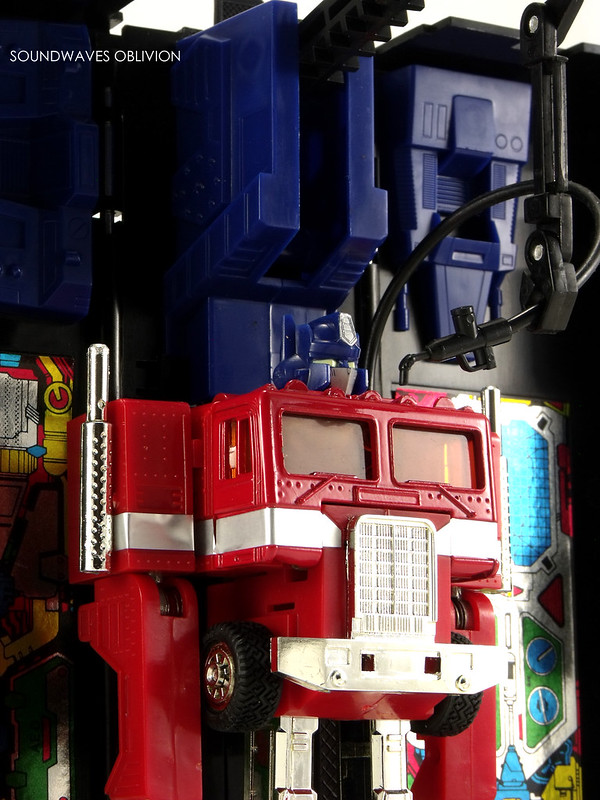