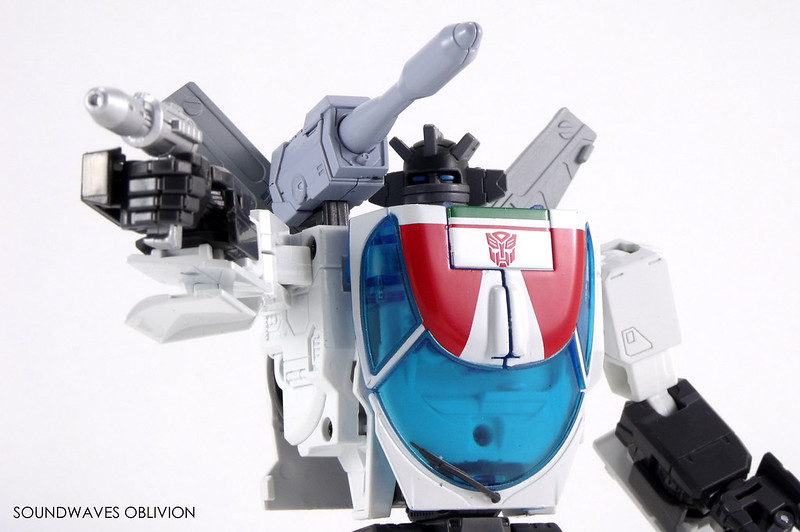 Profile (Translated from the Trading Card)
MP-20+ Cybertron Mechanical Engineer / Wheeljack
Function: Mechanical Engineer
Motto: "Never do what your enemy expects you to do."
Profile:
Wheeljack is the Cybertrons resident mad scientist immersed in science and technology and has a talent for coming up with strange inventions. Both his knowledge and inventions have led the Cybertrons to victory on many an occasion. Joins in with espionage, fighting the Destrons and repairing fellow Cybertrons after battle. At times he can be stubborn but he is dependable.
STR:6; INT:6; SPD:7; END:9; RNK:5; CRG:2; FBL:9; SKL:7 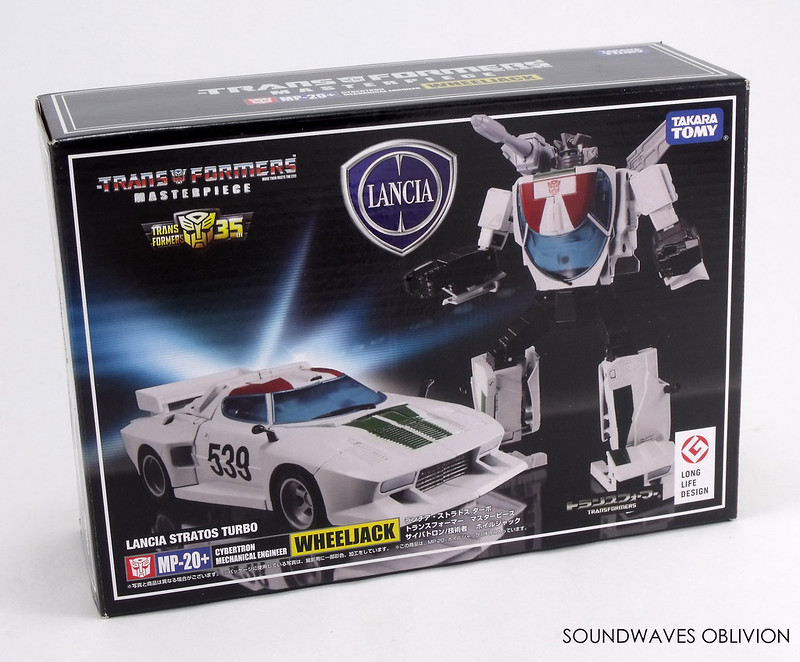 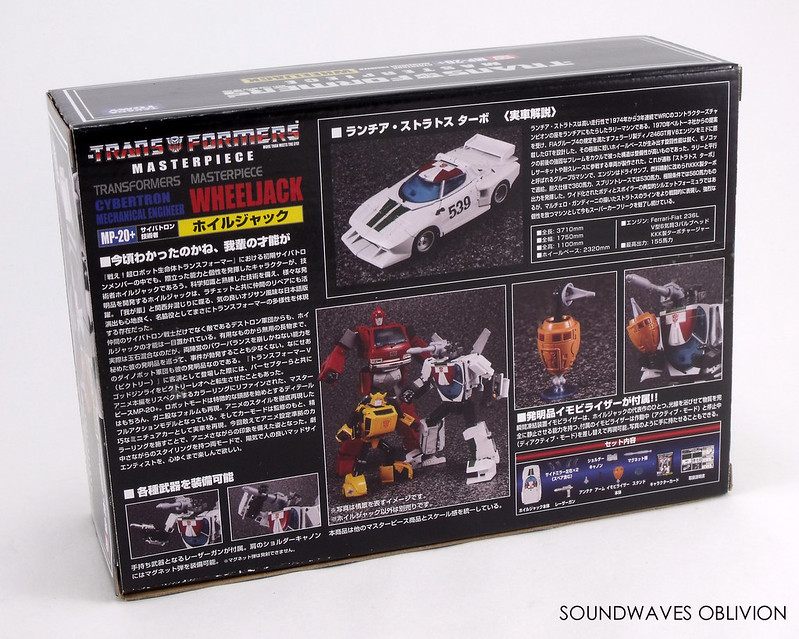 Released late February 2019 for 8,500 Yen (£62 / $78 USD), Wheeljack is the latest in the "Plus" series of repaints depicting past Masterpiece releases in cartoon accurate colours. In contrast to Wheeljacks 2014 release, MP-20+ looks quite bland in comparison. As well as coming with MP-20's original accessories (Missile Launcher and Laser Gun), this edition is packaged with a redeco of  the Immobiliser which came with MP-23 Exhaust in 2015. This figure was also made available in North America through Entertainment Earth. This "Hasbro" version of the figure is the standard Takara Tomy release in a black cardboard slipcase, however this is sold from $79.99 USD which is slightly more expensive than you can get it at import, especially if you purchase it from Amazon.jp. 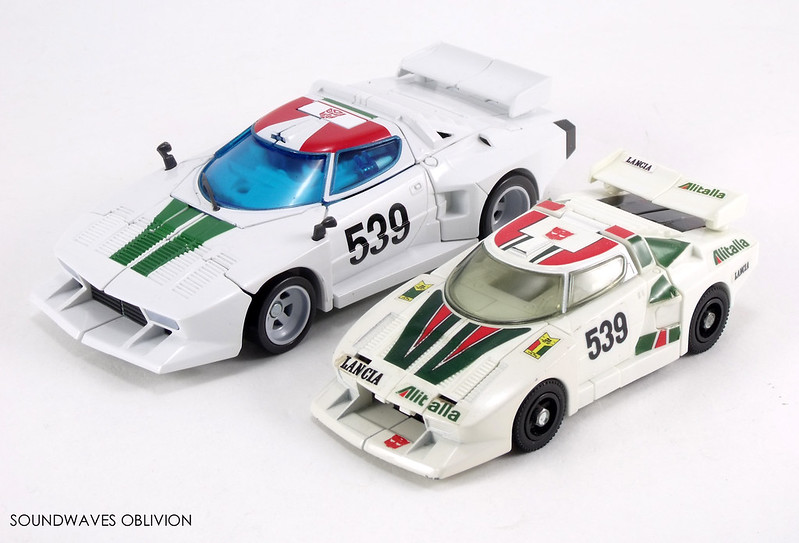 Wheeljack is packaged in vehicle mode and the mirrors are not attached to the vehicle mode yet, they come separately on a sprue along with a spare pair. Although the vehicle mode does look plain in comparison to the 2014 version, the new blue windscreen stands out. The only downside to the windscreen is not it is more transparent you can see a screw hole; however you can purchase a third party covering. 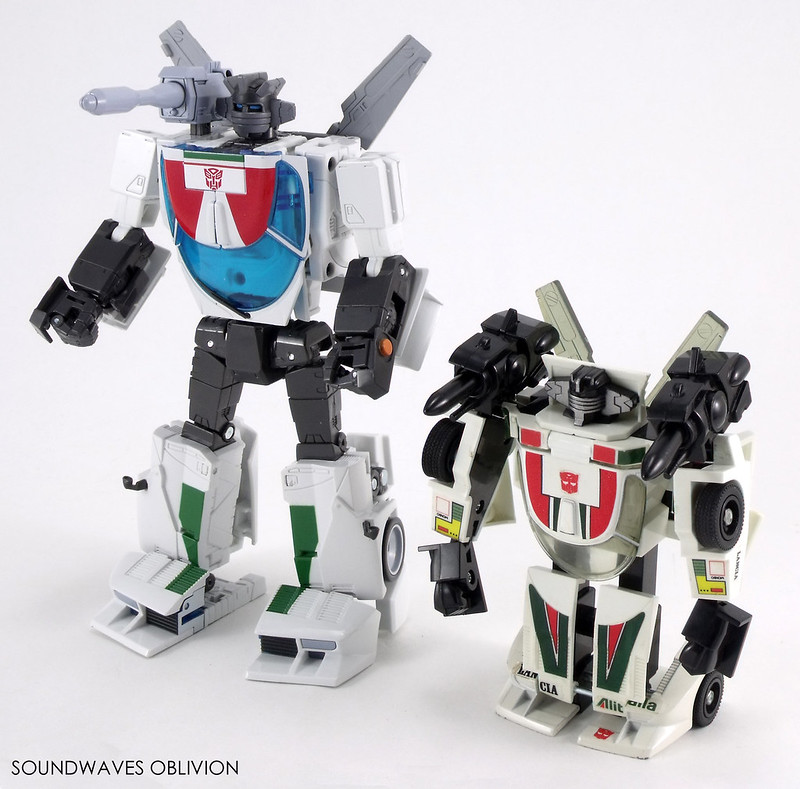 The joints are very tight when transforming the figure, as this figure has a translucent plastic chest, caution is advised. In robot mode Wheeljack does look like his cartoon counterpart, and is not as plain as the vehicle mode. I also found it difficult to get the figure to hold the handgun compared with the original. Overall this is a decent release and certainly fits in with the current direction of the cartoon accurate Masterpiece figures. 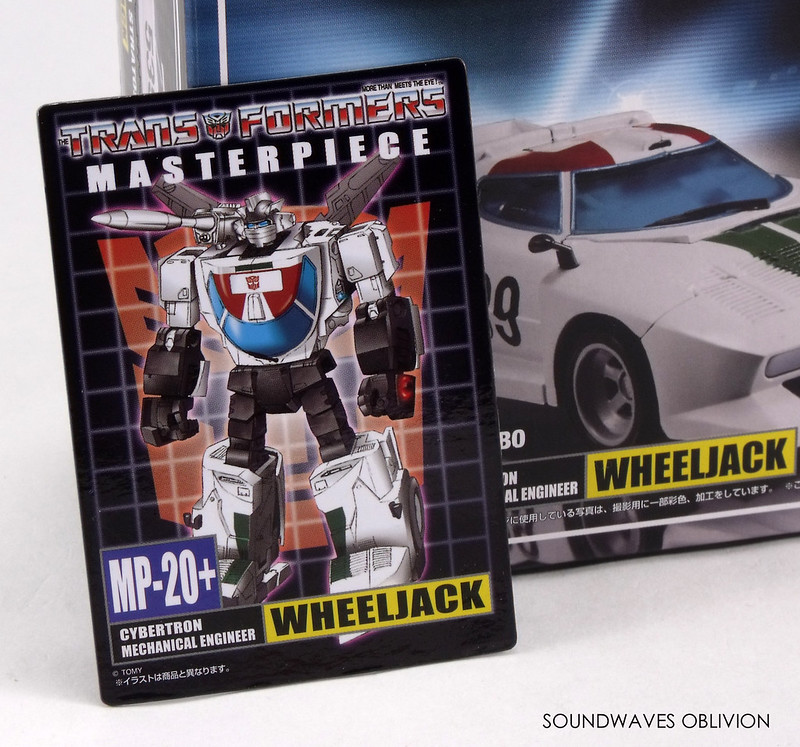 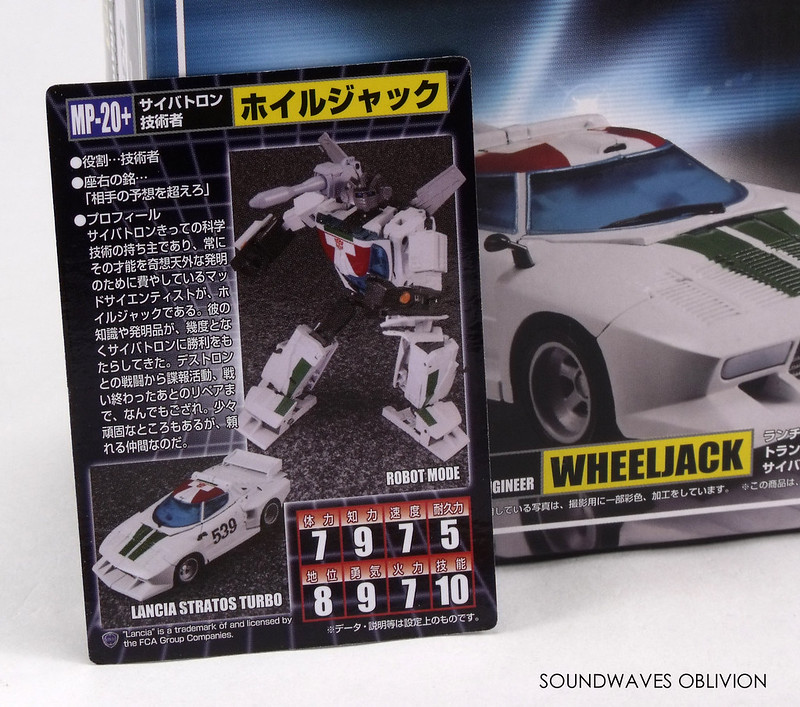 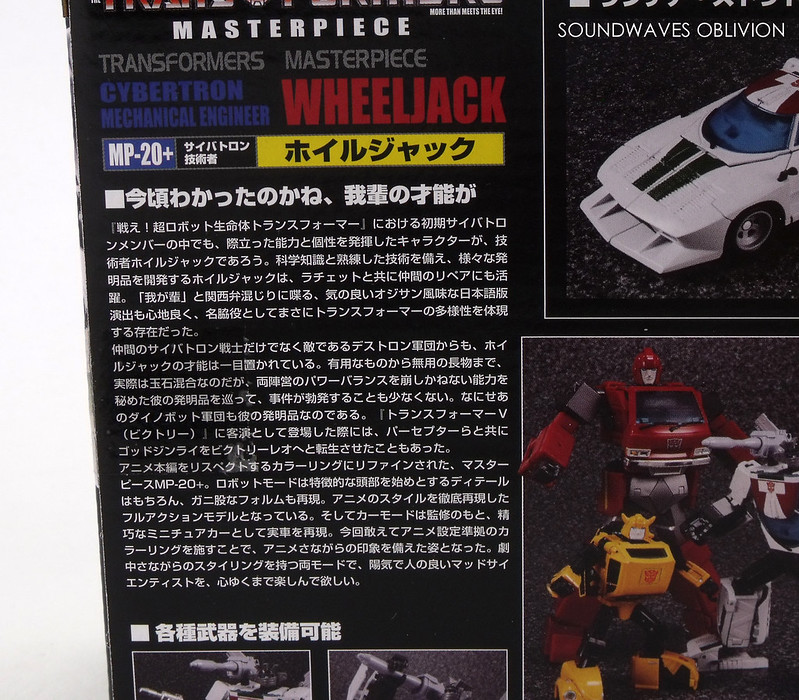 ■Now do you recognise my talent? (Translated from the back of the box)
Among the initial Cybertron characters in “Fight! Super Robot Lifeform Transformers”, the one who most demonstrated their ability and personality was the engineer, Wheeljack. With his scientific knowledge, passion and technology, Wheeljack develops a variety of inventions as well as helping Ratchet repair fellow Cybertrons. In the Japanese version, he is depicted as a nice old man speaking with the first-person pronoun “my fellows” and a mix of Kansai dialect; as a supporting character he embodies the diversity of the Transformers.
Wheeljack’s talents are recognised by both Cybertrons and Destrons. His inventions are a mixed bag ranging from the useful to the useless, some cause incidents others can determine the power balance between both sides. The Dinobots after all were one of his inventions. When he had a cameo appearance in “Transformers Victory”, he modified God Ginrai into Victory Leo with the help of Perceptor.
Masterpiece MP-20+ has been refined to reflect the anime style colouring. His robot mode shows off his characteristic head and other details such as his leg stance. He has become an action figure right out of the cartoon. The car mode produced under supervision from Fiat has the look of a sophisticated miniature car; yet its colouring replicates the animated model. We want you to enjoy this cheerful, good natured mad scientist to your heart's content. 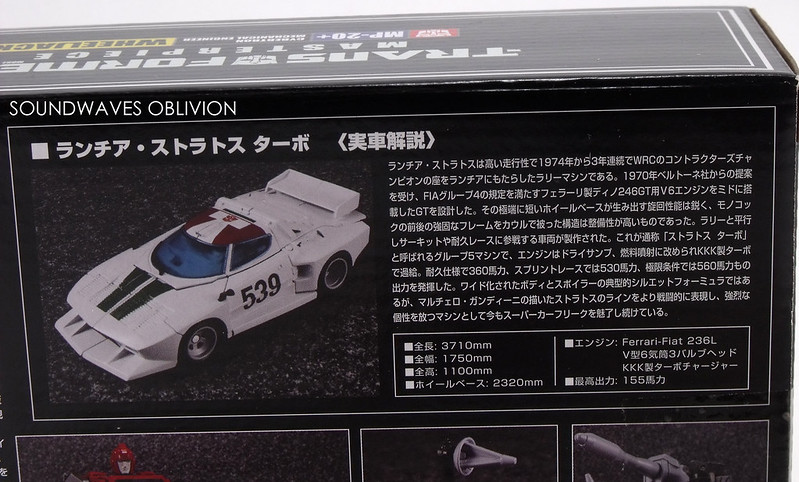 Lancia Stratos Turbo (Actual Car Notes) (Translated from the back of the box)
Lancia Stratos is the rally car that brought the Manufacturers Championship to Lancia for three consecutive years from 1974. In response to a proposal from Bertone in 1970, Lancia designed a Grand Tourer (GT) equipped with a Ferrari 246 GT V6 engine to meet the requirements of the FIA Group 4. The short wheelbase allows the car better performance to take sharp turns and the vehicle has a strong frame structure encased in a maintainable monocoque cowl. It was a vehicle built specifically for circuit and endurance races. The Group 5 machines are commonly referred to as “Stratos Turbo” as the engines were changed to a dry sump and fuel injection supercharged by KKK Turbo. For endurance it delivers 360 horsepower, at a sprint race it can reach 530 horsepower and 560 horsepower with extreme conditions. The vehicles silhouette follows the typical formula of a wide body and spoiler but Marcello Gandini gave the Lancia a combative expression. The continues to attract supercar freaks as the machine emits an intense individuality. 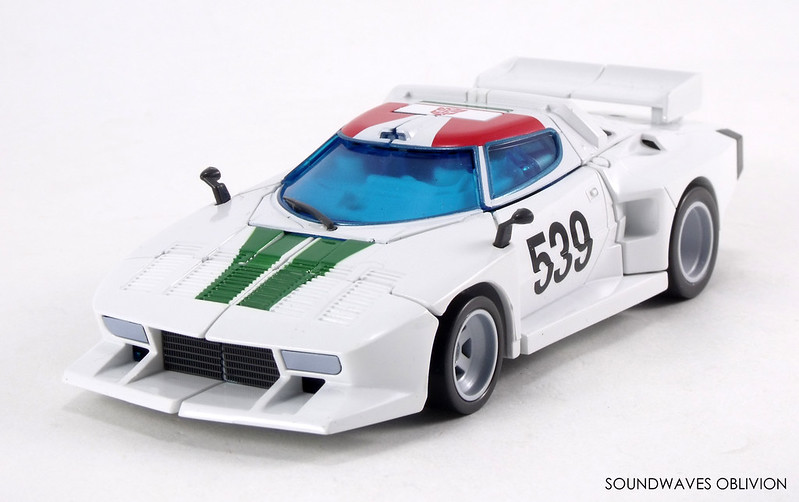 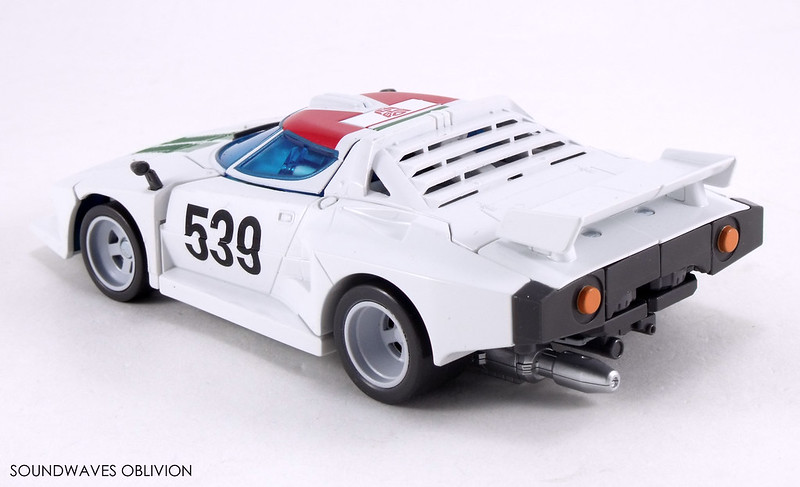 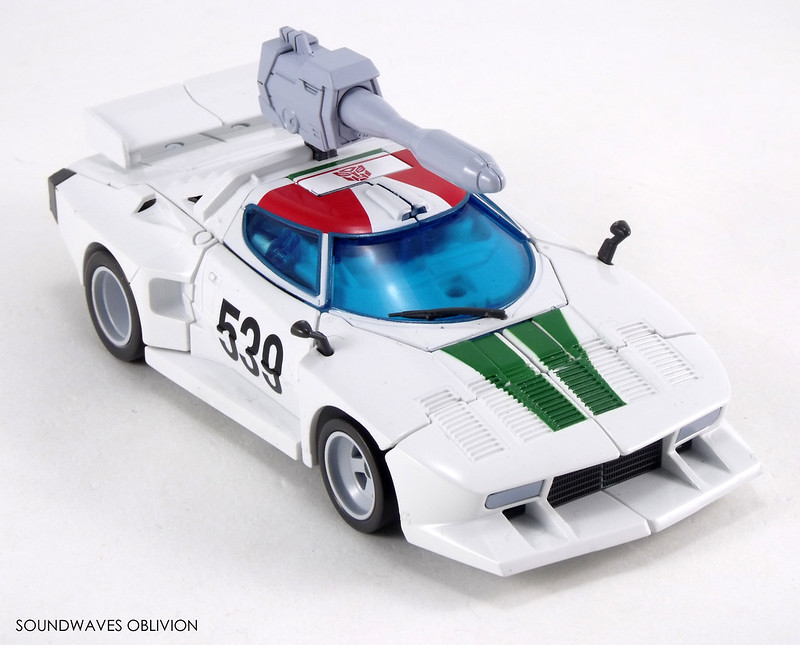 Vehicle Mode: Lancia Stratos Turbo (Translated from the instruction pamphlet)
In comparison to his robot mode, Wheeljack’s car mode is an elegant race car. Exceptionally proud when presenting his new inventions to his companions. His personality comes out even when he is transformed into vehicle mode. Surprisingly he has professional driving skills and is capable of pulling off incredible stunts which he enjoys demonstrating to his companions. Teletran-1 gave him a Stratos Turbo vehicle mode and to reflect his personality he was coloured vividly with red and green stripes. The Lancia Stratos Turbo has more power than a normal car; it has an overdrive which allows him to escape from attack with a powerful acceleration. He is such an incredible machine that as well as running on the ground he can also travel on and under water. On Planet Seibertron before arriving on Earth, Wheeljack transformed into a One Box type hover car. In this mode he was shown raising a shield and crashing through an enemy line. No matter his car mode styling, he would always retain his driving ability. 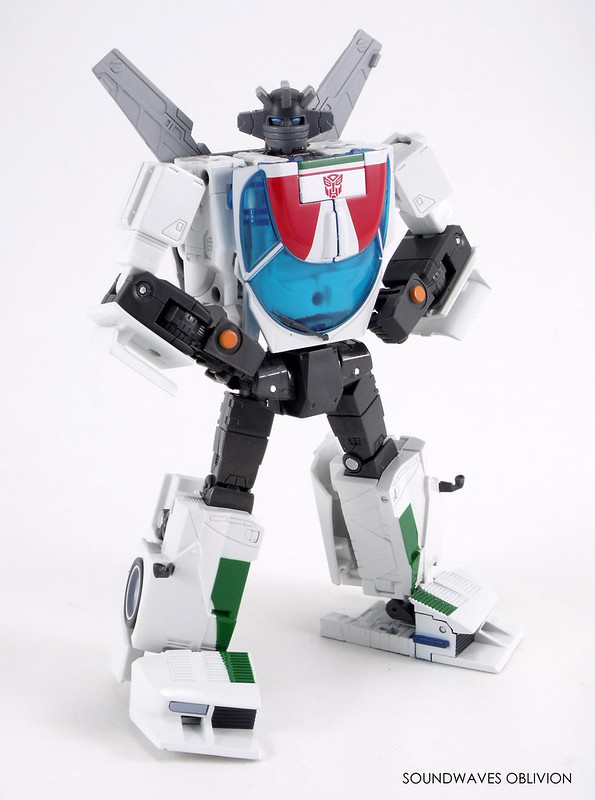 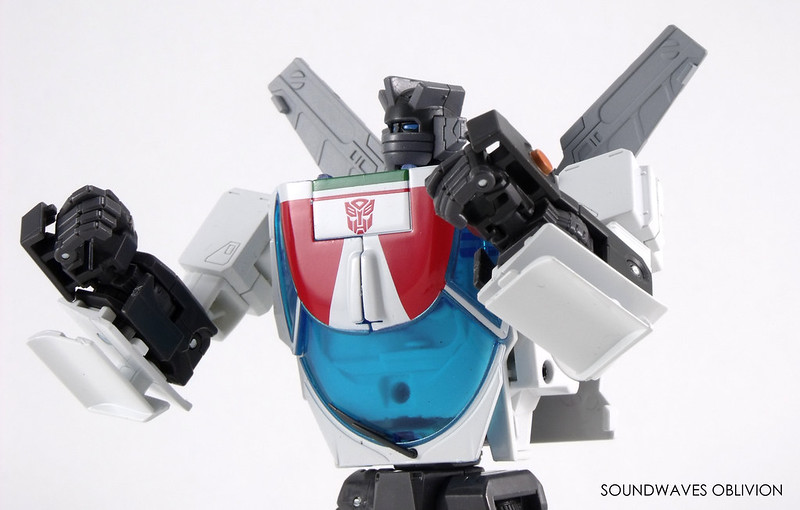 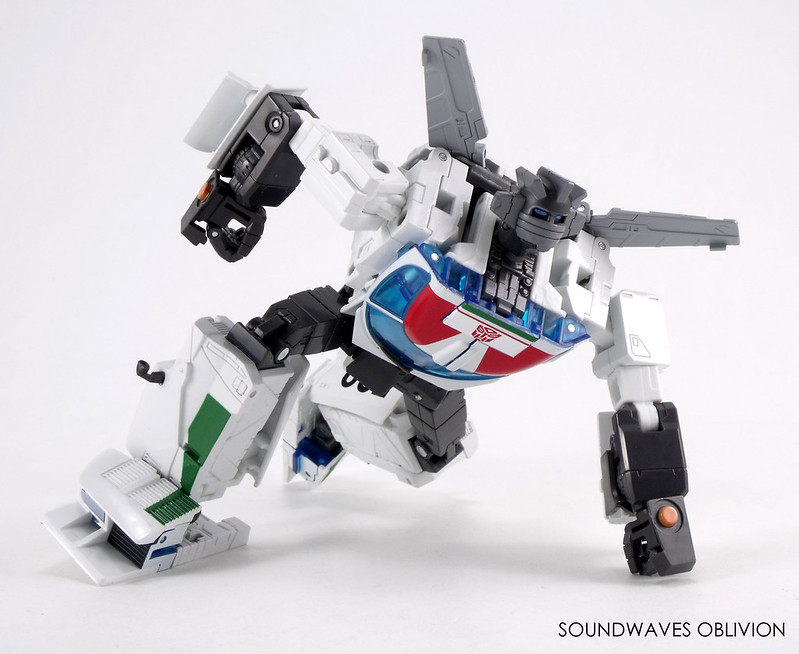 Robot Mode: Wheeljack (Translated from the instruction pamphlet)
Function: Mechanical Engineer
Motto: "Never do what your enemy expects you to do."
Profile:
Wheeljack was the first Transformer to appear on screen in the animated cartoon series “Fight! Super Robot Lifeform Transformers.” The intellectually inquisitive Wheeljack is both an engineer and scientist and being shipwrecked on an unknown plant, Earth, piqued his curiosity for new inventions. As such, Wheeljack was inspired to create the Dinobots after finding dinosaur fossils; other inventions are much more diverse with a mind transfer device which could transfer the human mind to another body and an immobiliser which instantly freezes its target. Some of his inventions were failures such as his Shock Blast Cannon and other numerous creations. Sometimes his inventions are stolen and exploited by the Destrons. Despite this, Wheeljack always remains positive and still comes up with new inventions. At the base Wheeljack joins in with Ratchet, Perceptor and Sparkplug repairing fellow Cybertrons. Undaunted in battle when confronting the Destrons. The attraction of the Transformers is the diverse cast of characters, Wheeljack may not be a heroic figure but is a mature character who always talks to people as “my fellows”, he will however not hesitate to put himself in dangers way to help Spike and fellow Cybertrons. 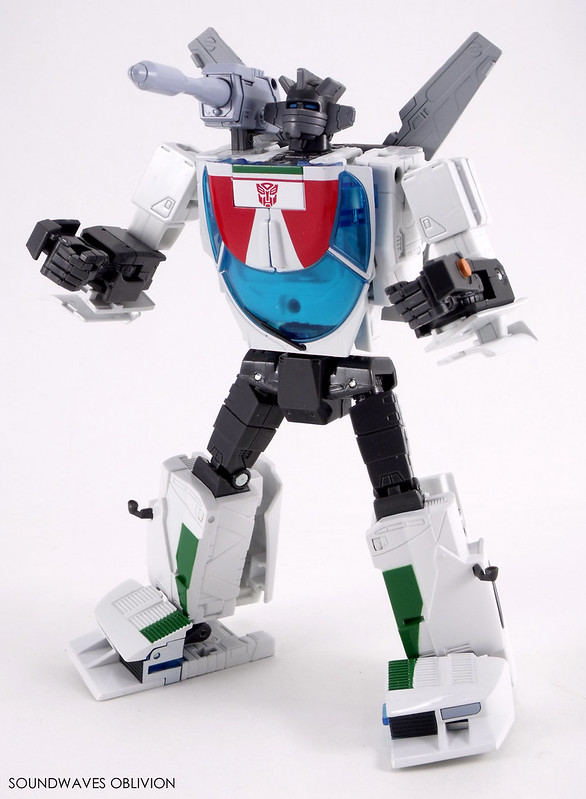 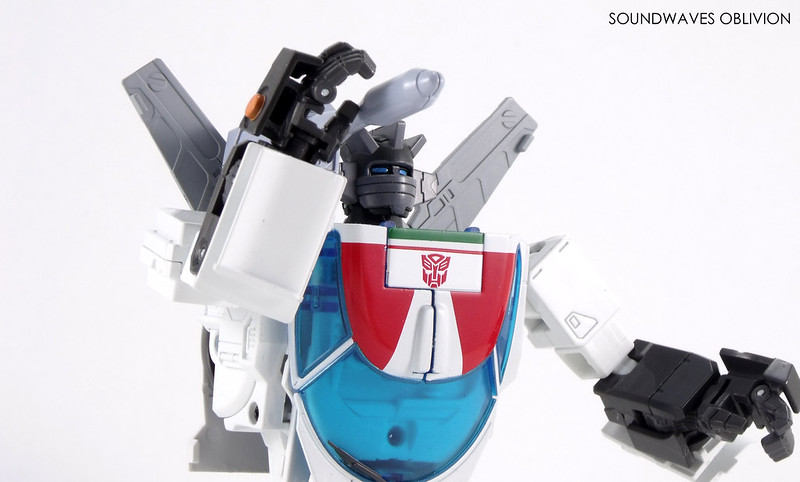 Weapon: Shoulder Cannon (Translated from the instruction pamphlet)
Wheeljack's main weapon is mounted on his right shoulder. He normally loads it with magnetic bullets but he also fires a magnetic inducer which paralyses the enemy. Dependant on his situation he will also launch shrapnel needles and gyro-inhibitor bullets. In episode 15 “Atlantis, Arise!” he launches a missile which caused devastating destruction. 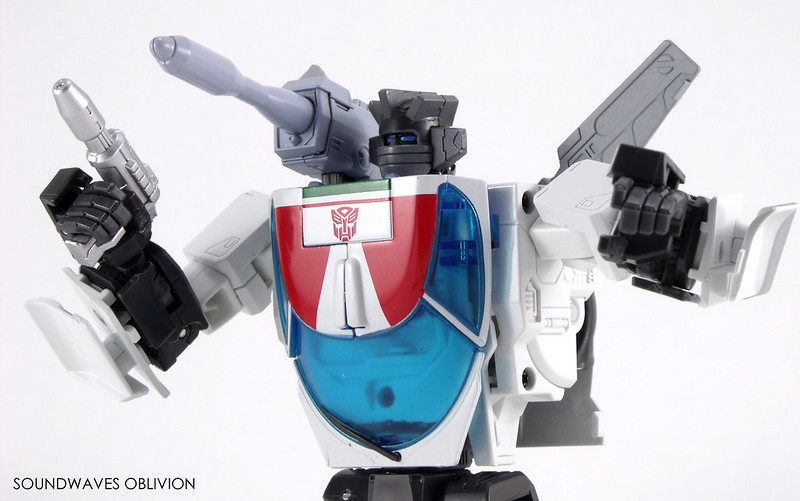 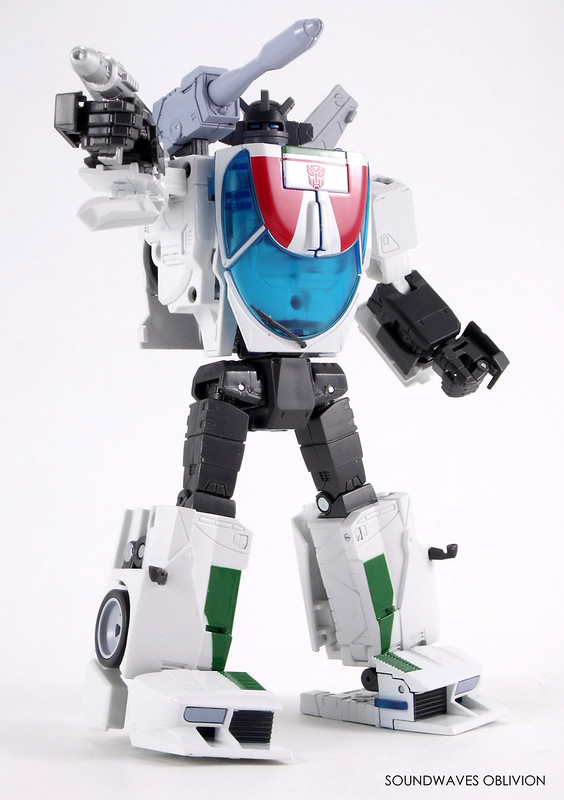 Weapon: Laser Gun (Translated from the instruction pamphlet)
A small gun that Wheeljack occasionally carries during battle. Like the other Cybertron weapons it can also fire laser beams. In the 63rd Episode “Day of Destruction Part 3” he fires it along with the other Cybertron warriors towards Megatron's spaceship filled with Energon. 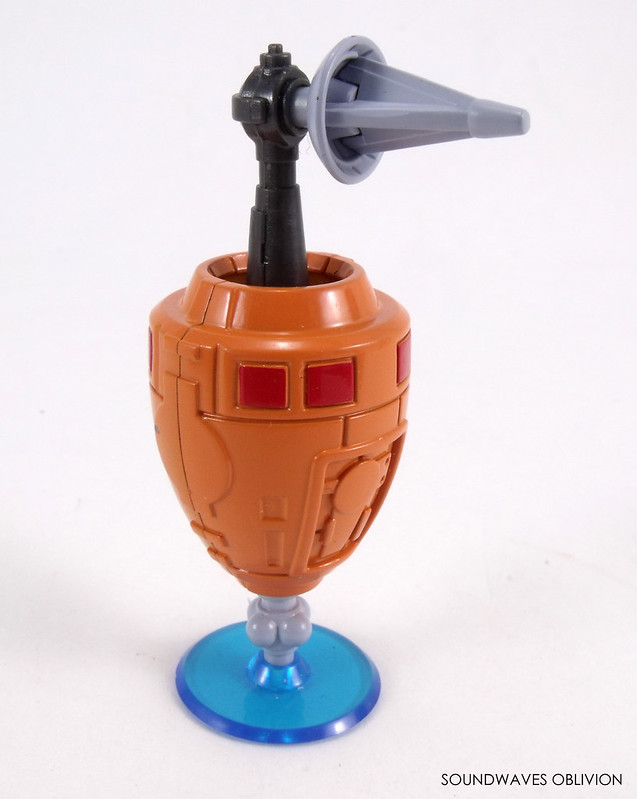 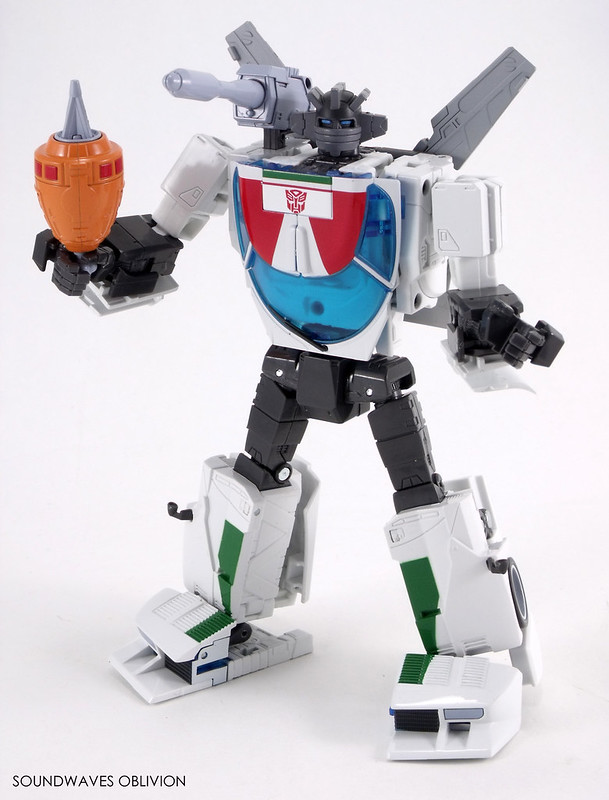 Weapon: Immobilizer (Translated from the instruction pamphlet)
In episode 14 of “Fight! Super Robot Lifeform Transformers” the instant freezing device, the Immobilizer, appeared. The rays of light emitted from its parabolic antenna can freeze its target instantly from Transformers and organic creatures to rivers and holograms.

View the full gallery here on Flickr.
Posted by Jeremy Barlow at 09:02