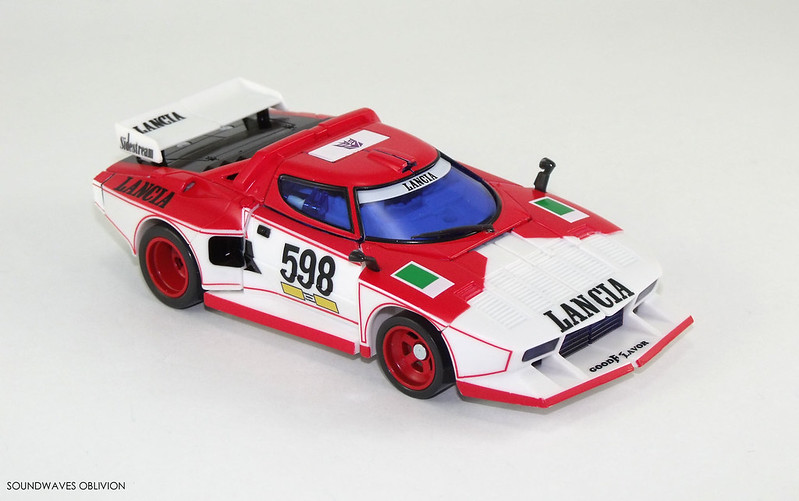 Profile (Translated from the Trading Card)
MP-23 Destron Industrial Espionage Soldier / Exhaust
Function: Industrial Espionage Soldier
Motto: “You can’t catch smoke with bare hands.”
Profile:
His mission is industrial espionage, spying on commercial alien enterprises across the galaxy secretly stealing their economical information and advanced technologies. He works for the interplanetary giant “Marlboor Dynamic” and it is from here that he carries out various espionage activities. Marlboor has long studied the special abilities of mechanical life forms; by changing the particles of Exhausts entire body they have given him a “quantize” ability allowing him to turn himself into living smoke which is impossible to capture.
STR...8; INT...8; SPD...7; END...10; RNK...7; CRG...7; FPR...7; SKL...8 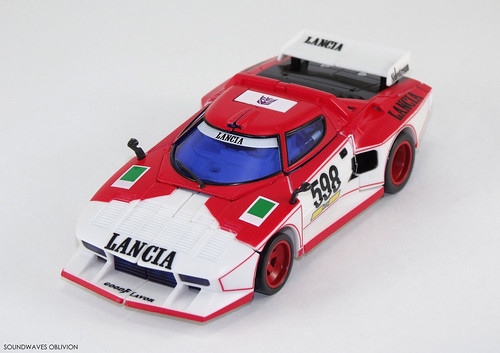 I've already touched upon some of the history in the G1 Wheeljack article but to expand, Lancia built two cars to take part in the 1976 Group 5 racing; these cars were the Lancia Stratos Turbo silhouette series (note: a silhouette series is a car which has resemblance to a production model). The cars numbers were #598 (Driven by Carlo Facetti / Piero Sodano) and #599 (Driven by Raffaele Pinto / Arnaldo Bernacchini), both of which were in Marboro livery. The 598 car won the Giro d'Italia on the 20th October 1976 whereas the #599 car caught fire due to overheating problems during a practise race in Zeltweg Austria and was destroyed.


In 1977, the remaining 598 car was repainted with the green Alitalia livery and numbered 539 and was driven by Sandro Munari and Piero Sodano to victory in the Giro D'Italia in 1977. After this race it was shipped to Japan to take part in the Fuji Speedway but it never competed becoming part of the Matsuda Collection. Years later it was eventually sold to London based car designer Christian Hrabalek who boasts the largest Lancia collection. The car still sports the decals from the 1977 Giro D'Italia race.

(Out of interest, Christian Hrabalek designed the Fenomenon Stratos which is what Transformers Prime Wheeljack is based upon with the smaller Cyberverse version sports red colouring harking back to the Marlboro/Marlboor version.)

There are currently three known replicas, one in the Matsuda Collection which is in the original #598 Marlboro livery; one residing in Italy built from a Group 4 car with parts from the damaged #599 car; and one which is owned by Hennessy Racing. 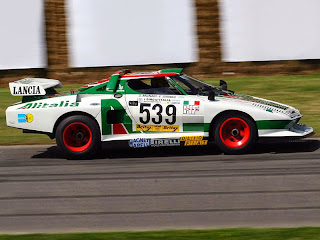 
The original Diaclone release in 1983 was based on the green Alitalia livery (deliberately misspelled as "Alitalla") which later became Wheeljack. The second release in 1983 was based on the Marlboro livery (again deliberately misspelled "Marlboor"). Though in different colours and with different robot heads, both share the same box art. The Marlboor version is scarce and commands very high prices on the secondary market, seen by many Diaclone collectors as their "Holy Grail". This version was not released in Italy in GiGs Diaclone line or in the French Joustra Diaclone line making this all the more hard to find. 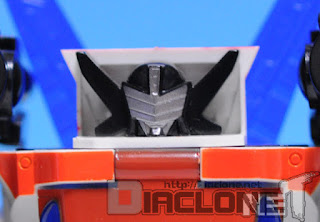 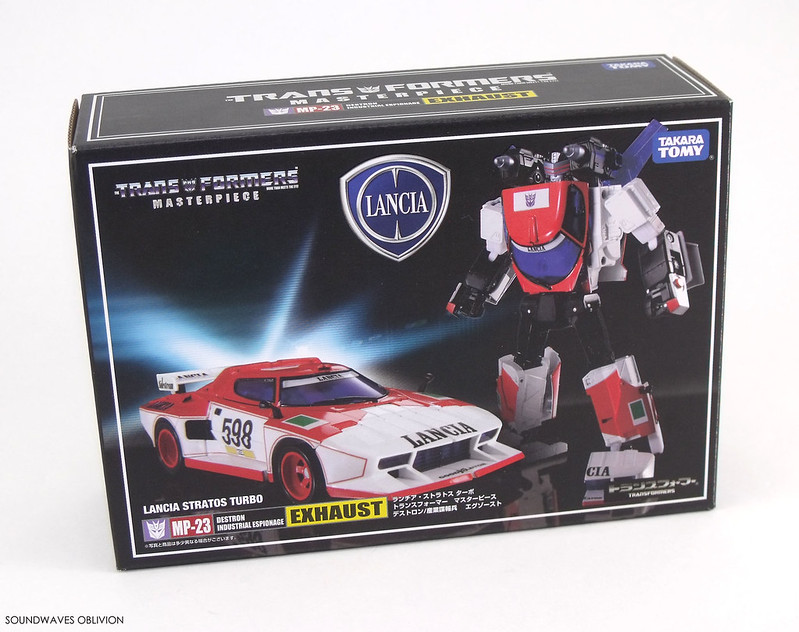 When Takara announced Exhaust as MP-23 it left a few scratching their heads. Not only was this an entirely new character, it was given its own designation number rather than something like MP-20E, an alternative against Wheeljacks number. However it certainly would have been a shame not to release a Marlboor version. Just like the Diaclone version, the Masterpiece version was inadvertently hard to obtain with many online retailers cancelling preorders. Due to pressure from the American tobacco company Philip Morris, who own Marlboro, Takara were initially made to change the iconic design. They made changes but not enough to convince Philip Morris. Only Japan was able to retail the figure and with Hasbro Asia unable to distribute the figure, the collectors coin remained unreleased.


Possibly due to the difficulties posed by Philip Morris, Takara poke fun at Philip Morris by including in Exhausts extended bio that he works for "Marlboor Dynamic" and due to the stress from working there he became addicted to "Cy-Garettes" 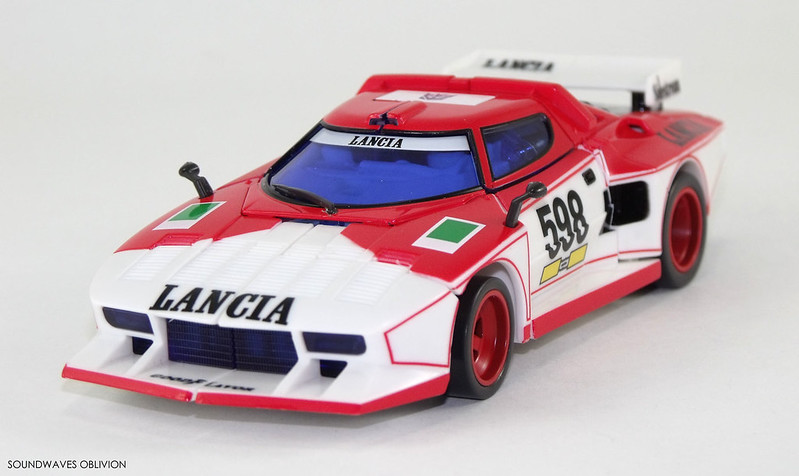 Exhaust maintains the iconic look of the Group 5 racer, although like Wheeljack the car looks a bit plain without any sponsor logos. Gone is the "Marlboor" reference and instead it is "Lancia", though Marlboor is referenced in the bio. Also on the front spoiler of the car is "GoodFlavor" and on the rear spoiler is "Silverstream" which are more tongue- in-cheek references to cigarettes. 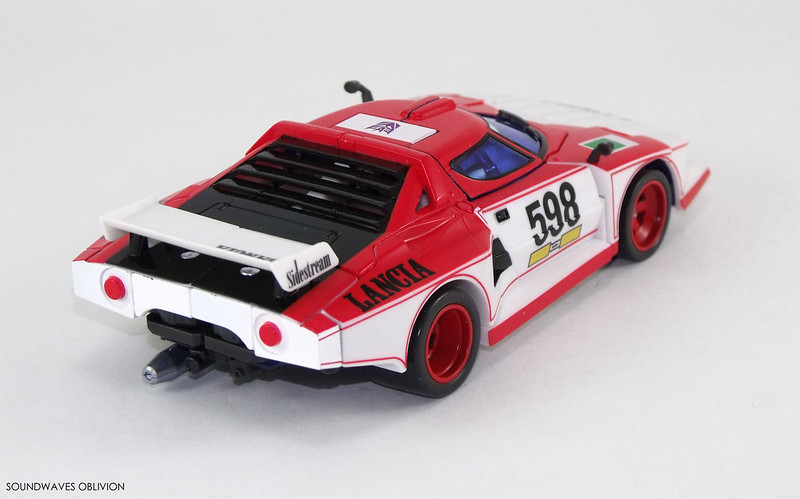 Transformation to robot mode is identical to Wheeljack, though I would urge caution with the robot head as the "ears" are made of thin plastic and are liable to bend easily and cause a white stress mark in the plastic. In keeping with the Diaclone look the car windows and the root wings are translucent blue and the new head sculpt is a good up-to-date version of the original. Whether it is just mine or down to reuse of the mould, the robot chest doesn't seem to fully close leaving a small gap, something that does not affect my Wheeljack figure.
Exhaust comes with completely different accessories than Wheeljack such as the Immobilizer. This accessory appeared in the G1 episode of the same name "The Immobilizer" and this was its only appearance in the original cartoon series. The Drone Launchers are Exhausts shoulder weapons and are updated versions of the original accessories. They can also fit on Wheeljacks shoulders for G1 toy accuracy. Exhausts hand held weapon which also doubles for Exhausts exhaust and is a basic recolour of Wheeljacks weapon. Vehicle Mode: Lancia Stratos Turbo (Translated from the instruction booklet)
When Exhaust came to Earth to steal the Immobilizer he used the disguise of a Lancia Stratos Turbo to blend in. This car was developed by Lancia to win the World Rally Championship; its car number is 598 with bright red and white colouring. This car mode has become a favourite of Exhausts and he has used it since he completed his mission, even when not on Earth. The maximum speed is 250km/h though no means faster than other car Transformers. Effortlessly shakes off pursuers with excellent steering and short bursts of hyper speed. Exhaust is in business with Marlboor Dynamic and from various experimentations that they have carried out on him, Exhaust has a variety of additional abilities. His “quantize” ability allows him to change his whole body into living smoke allowing him to evade capture. In this particle state he can move at high speed but not in vehicle mode. He causes extensive damage when he passes through any high precision machinery. Another ability is the “Power Syphon” which allows him to extract energy from any lifeform. He depletes energy using the palms of his hands and he is also capable of draining Sparks. He first tested out his new abilities when he stole the immobilizer from the Cybertrons. In battle his presence is felt everywhere and instils fear in those he confronts. His Quantize ability consumes a lot of energy and prolonged use is dangerous leaving him unable to use his energy absorption ability. In a power crisis he drains energy like a vampire. His name “Exhaust”, is appropriate seeing as he can become a plume of living smoke. 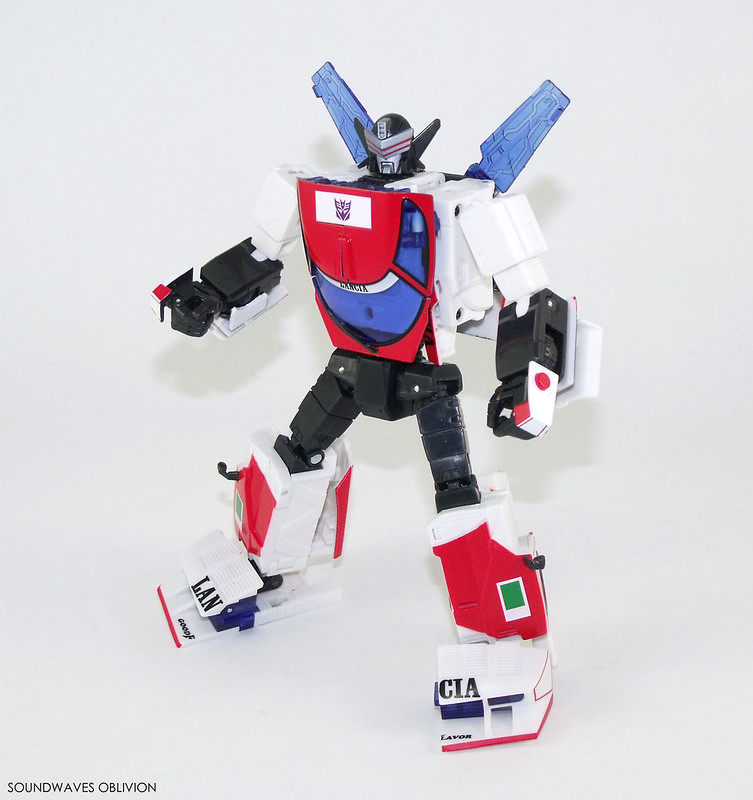 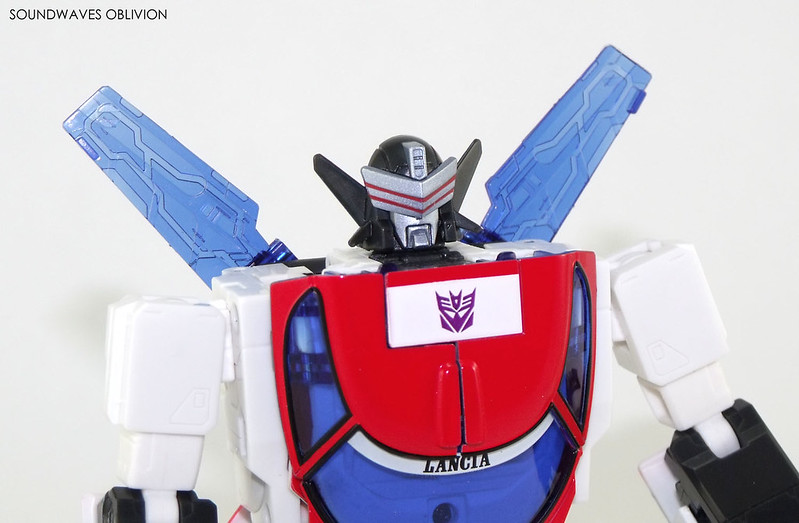 Robot Mode: Exhaust (Translated from the instruction booklet)
Although Exhaust is a Destron soldier his speciality is industrial espionage, infiltrating private enterprises. While these business go about their day to day activities, behind the scenes their advanced technologies, economic information and high valued goods are secretly being stolen. Interplanetary giant, Marlboor Dynamics, has a wide variety of alien employees. Exhaust obtained a post in the Public Relations Division to get a foothold with his espionage activities, enabling him to access various legal documents with details on other companies. The Marlboor company incorporates alien technology to improve and adapt their own. They wanted Exhausts Transformers technology, so decided to tolerate his activities outside the business in order to use him as a guinea pig. He gained a variety of special abilities through Marlboors experiments but his life as an office worker was eating away at him. Because of this stress, he grew addicted to “Cy-Garettes”, using more day after day. When undertaking missions Exhaust changes his demeanour in order to hide his true intentions and blend into the background. A perfectionist with an elitist attitude, unforgiving with trivial mistakes and his main joy is ousting company rivals. His superior Commander in the Destron army, Soundwave, ensures he attends this company even today for his own interests. 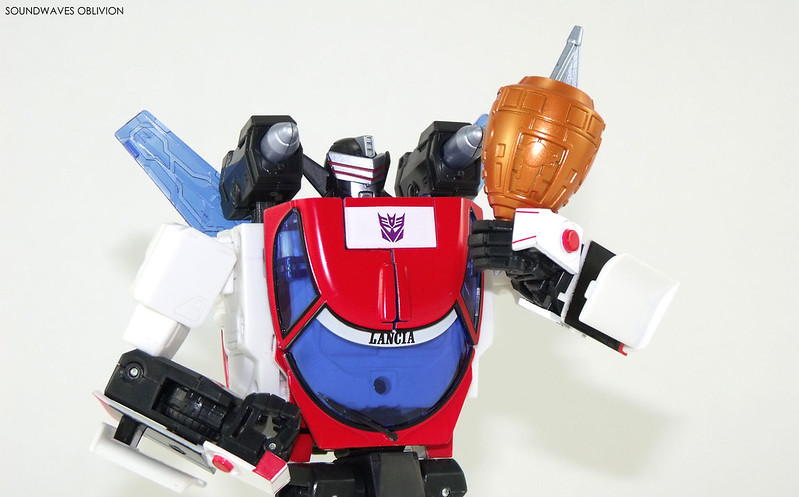 Weapon: Immobilizer (Translated from the instruction booklet)
A device that freezes time invented by the Cybertron Engineer, Wheeljack. It was destroyed by Ironhide when it was stolen by the Destrons but has since been restored and was kept in a secure lock-up at the Cybertron base. However it has been taken by Exhaust utilising his new Quantize and Power Syphon abilities, and has once again fallen into evil hands. 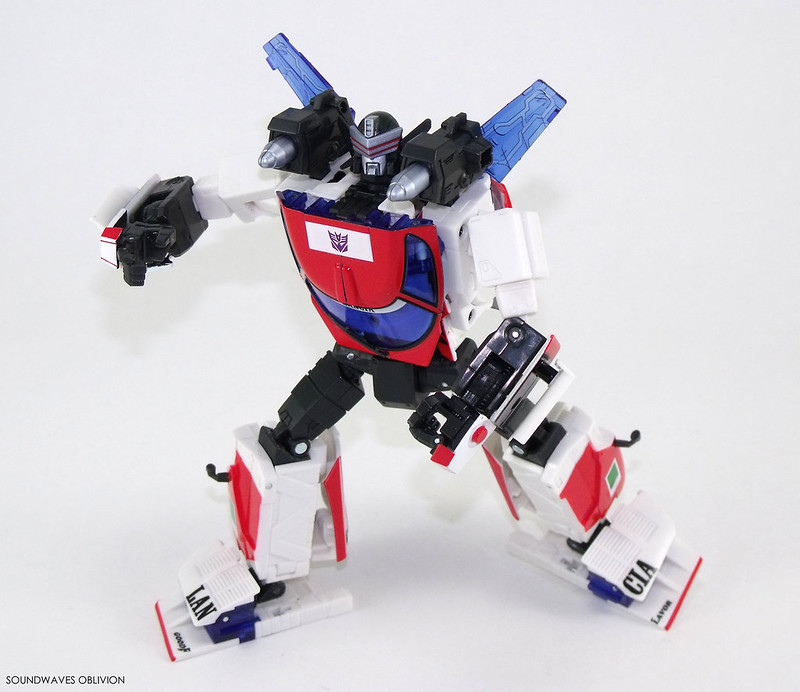 Weapon: Drone Launcher (Translated from the instruction booklet)
Exhausts dedicated long-distance weapons fitted to both shoulders. Built in intelligent warheads together with self regulating air ventilation system ensure they reach their target. Uses a variety of warheads with different intelligence levels, can even be used as self-sufficient probes. 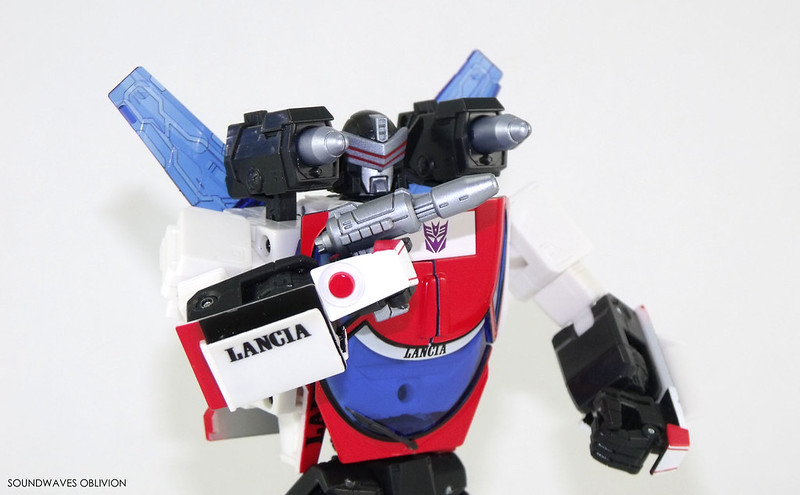 Weapon: Gadget Gun (Translated from the instruction booklet)
Exhausts small portable gun. Has a multitude of abilities, as a weapon fires powerful but silent needle bullets, can also be used for decryption and encryption allowing escape from strong prisons or access to safes. It can also act as an optical camouflage spray which can conceal him for invading enemy territory or escape. The Gadget Gun is an all purpose spy tool packed with a variety of useful functions. 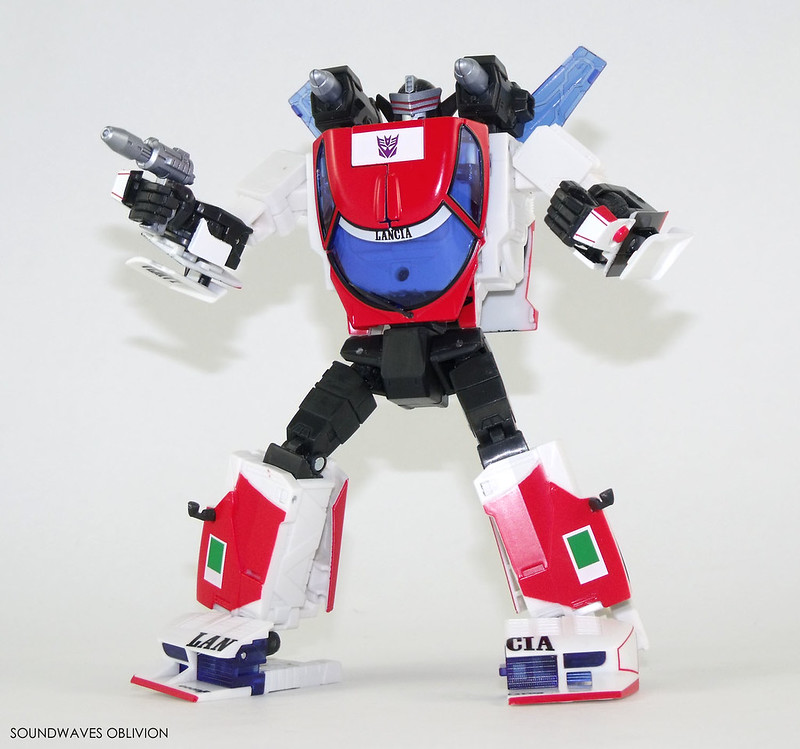 Many thanks to Bumble/Sam of the TFW2005.com boards who sent me a scanned copy of Exhausts instructions and trading card, allowing me to translate the profile and weapon descriptions while I was awaiting mine to arrive.
Posted by Jeremy Barlow at 19:39