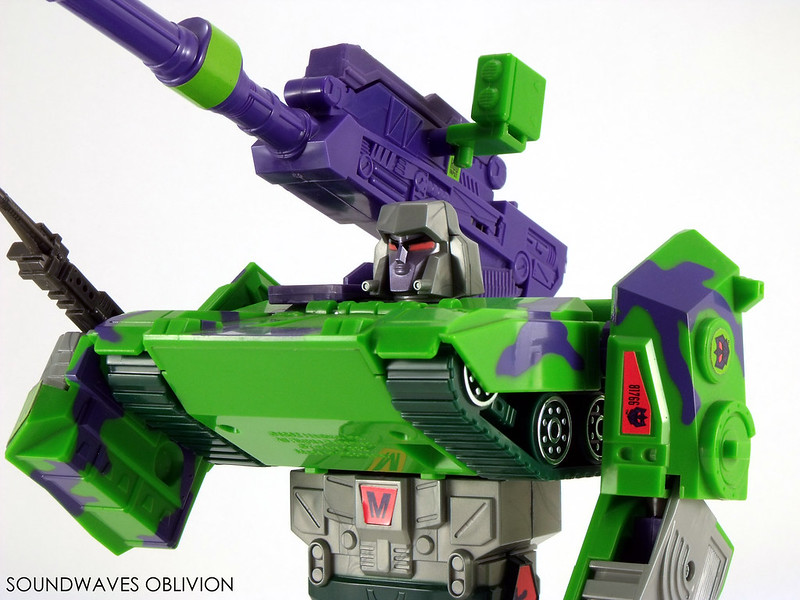 Function: Decepticon Leader
Motto: "Everything the Autobots have is rightly mine!"
Megatron is the ultimate tyrant. His genius and greed fuel his desire for ultimate supremacy, and so he leads the Decepticons in a battle to overcome his arch enemies, the Autobots. Armed with lasers and missiles he fights for control, and in tank mode is an impenetrable force using canons and explosives to invade the Autobots territory.
STR:9; INT:9; SPD:4; END:9; RNK:10; CRG:7; FPR:10; SKL:6 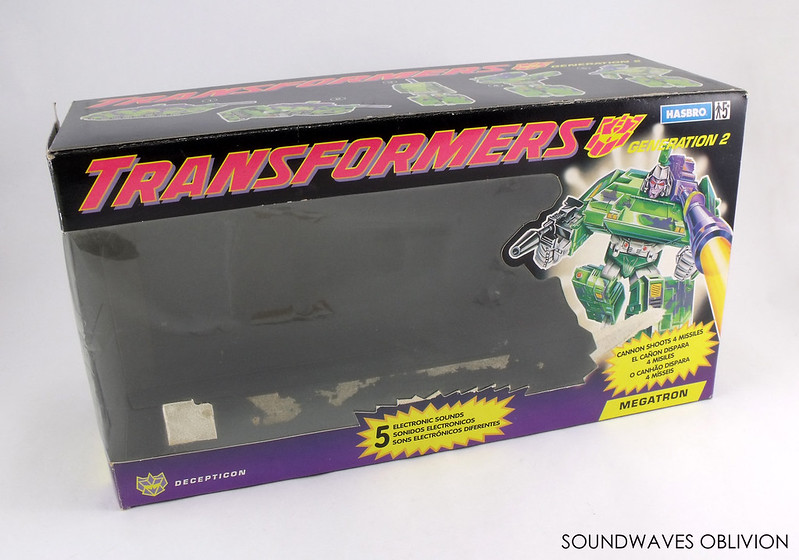 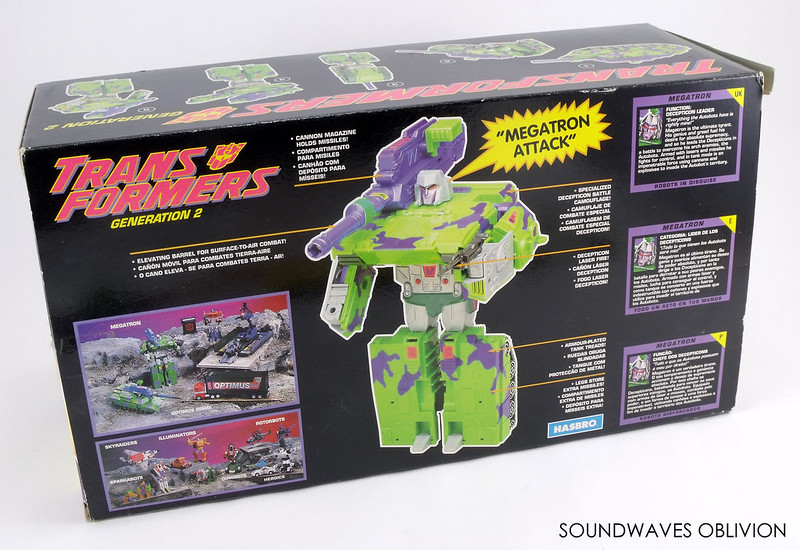 After the Action Masters and Micromasters in 1990, the Transformers went on hiatus in North America while in Europe, Japan and China the line was still going strong. The Transformers reemerged in North America late 1992 with a new Transformers toy line, Generation 2. The initial line up were repaints of a few G1 figures, notably Optimus Prime, Jazz, Starscream, and a few of the Dinobots. In 1993 the Decepticon leader Megatron was released however this was not a repaint of the original Megatron but a brand new mould which started the trend for Megatron's tank alternate mode. In issue #1 of the Marvel comics Generation 2 series it explains that Megatron has a new body courtesy of Cobra (G.I. Joe). Like G2 Optimus Prime Megatron came with sound effects which are powered by 2 AA batteries. 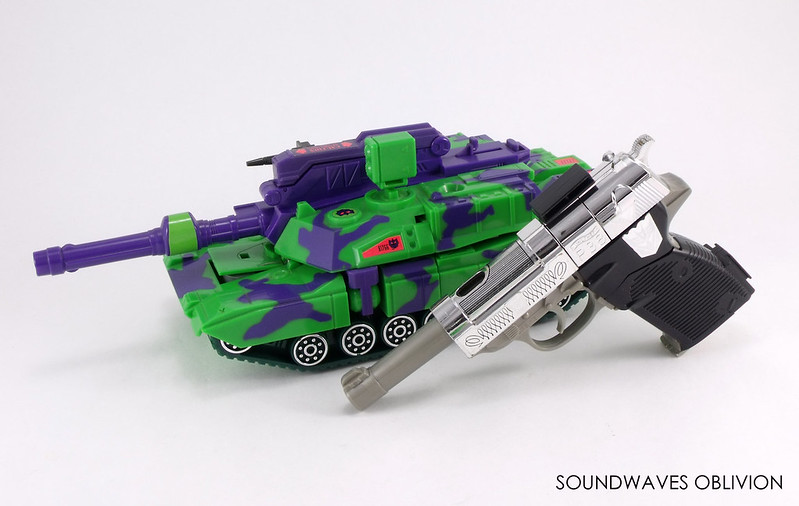 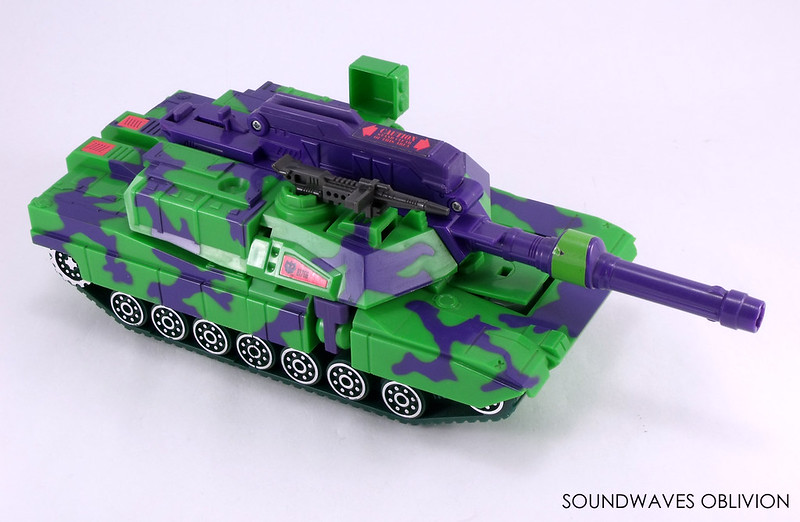 The Generation 2 line introduced new figures with greater articulation which had not been seen in a Transformers figure, such as Laser Optimus Prime and the Laser Cycles. Unfortunately Megatron was not one of them and this figure is a brick. 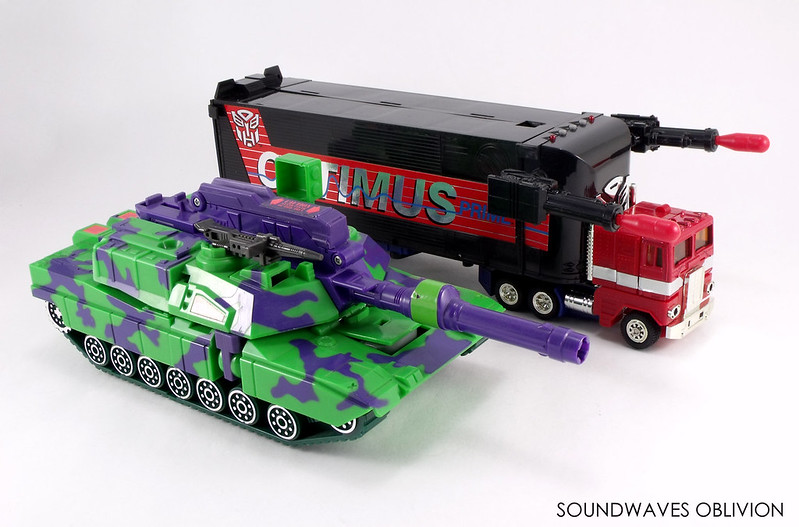 Megatron is a bright green M1A1 Abrams tank with purple camouflage, a very garish colour scheme which is commonplace in the Generation 2 series. In tank mode the turret does not rotate but the large gun can raise up and down. The tank treads do not mode but there are 4 wheels on the underside of the tank. When you push down on the tank when it is on a hard surface, the tanks engine sounds. 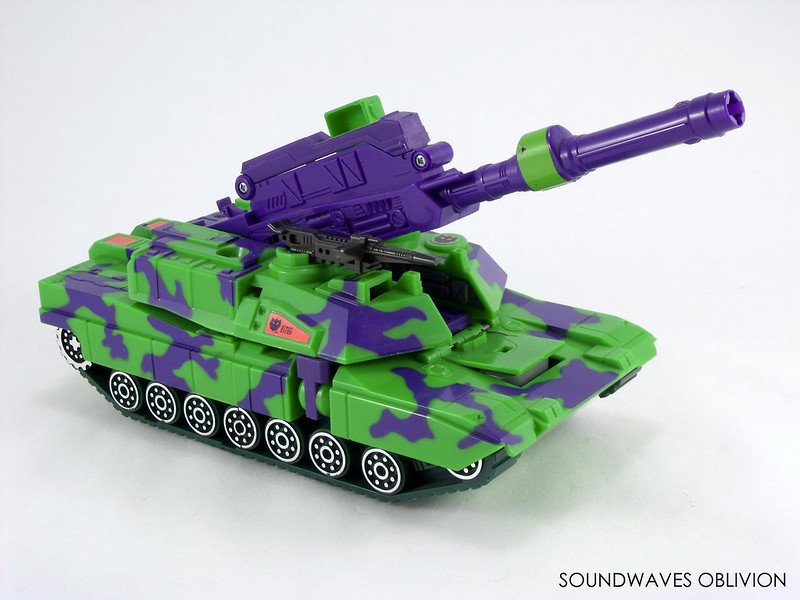 The large cannon has a green sticker on the barrel featuring the text "Big Stick" on one side and "Eat This! Autobots" on the other which is featured on the North American release (the European version removed the text leaving a plain green sticker on the cannon). The top section of the cannon lifts up allowing you to load it with 4 missiles, one on top of the other.  There is a firing mechanism where a lever is pulled back which plays a loading sound and there is a button to fire the missile which also plays a firing sound. Once one missile has been fired the next missile automatically drops down allowing you to repeat the process. 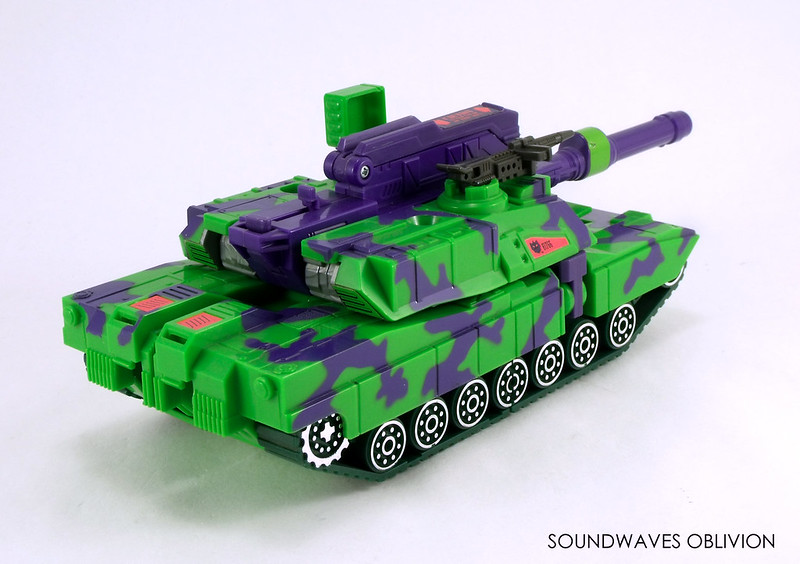 Transformation is very simple and when the large cannon is slid across to form the shoulder cannon, Megatron's head which is spring loaded automatically pops up. In robot mode Megatron is one large robot and looks very impressive. One downside is the robot is quite immobile with the only poseability being the robots arms with movement in the shoulders and elbows. Megatron comes with 6 missiles, which four can be stored in the large cannon, the extra two can be stored in Megatron's legs. 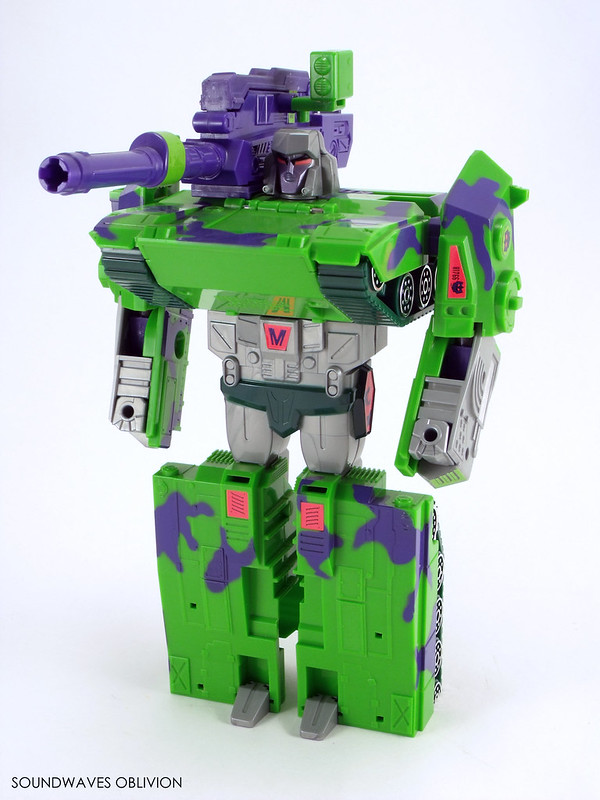 Megatron also comes with a smaller gun which he holds in his left hand. When the left arm is raised a laser sound plays. When Megatron's head is pressed down he speaks "Megatron Attack" with a generic voice. In tank mode you can also play this sound pressing down on the head panel at the front of the tank. 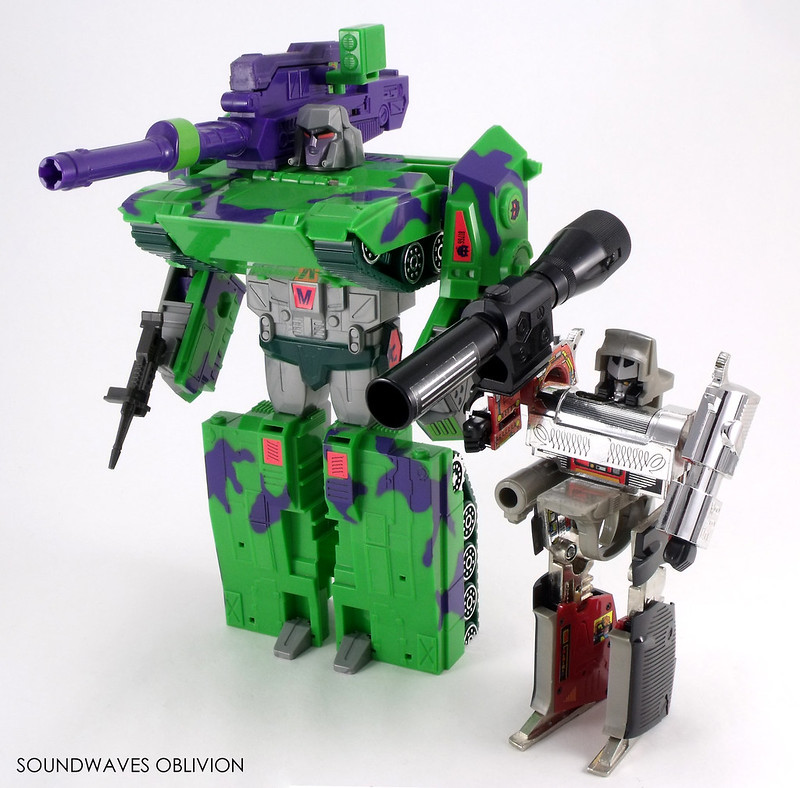 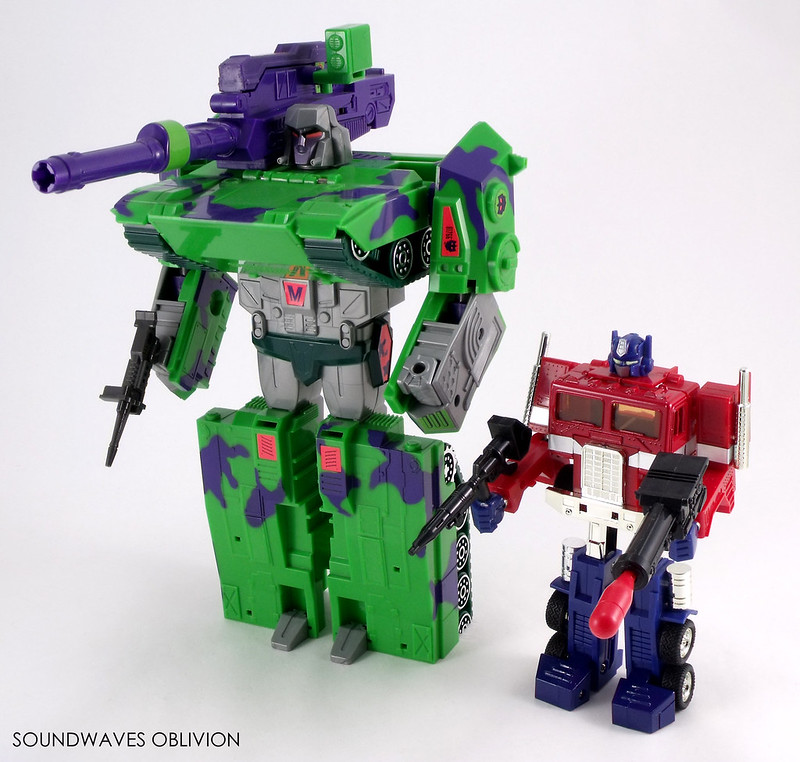 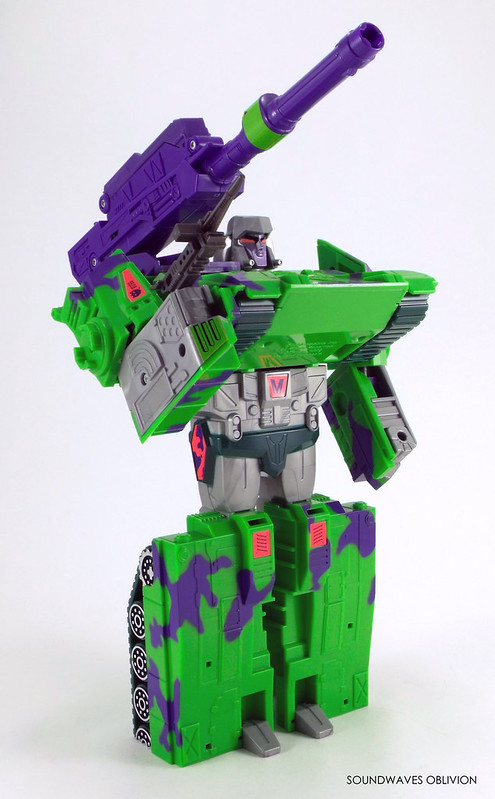 This version of G2 Megatron was not released in Japan, only the smaller "Hero" Megatron figure was however in 1998 under the Beast Wars Second line, this figure was released as Megastorm, a different character to Megatron. Megastorm was slightly repainted and no longer featured any electronics. Despite being a different character to Megatron, the cannons sticker reads Megatron's motto, "Peace Through Tyranny" instead of "Eat This! Autobots". 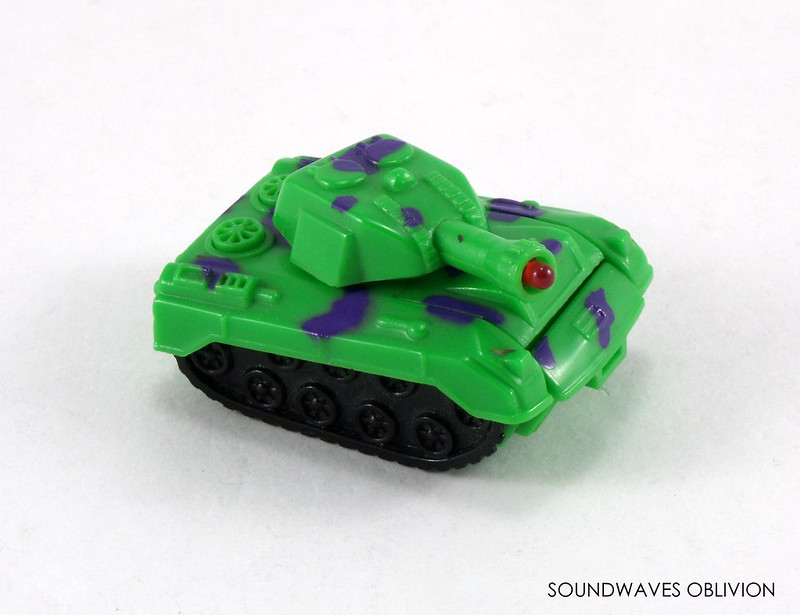 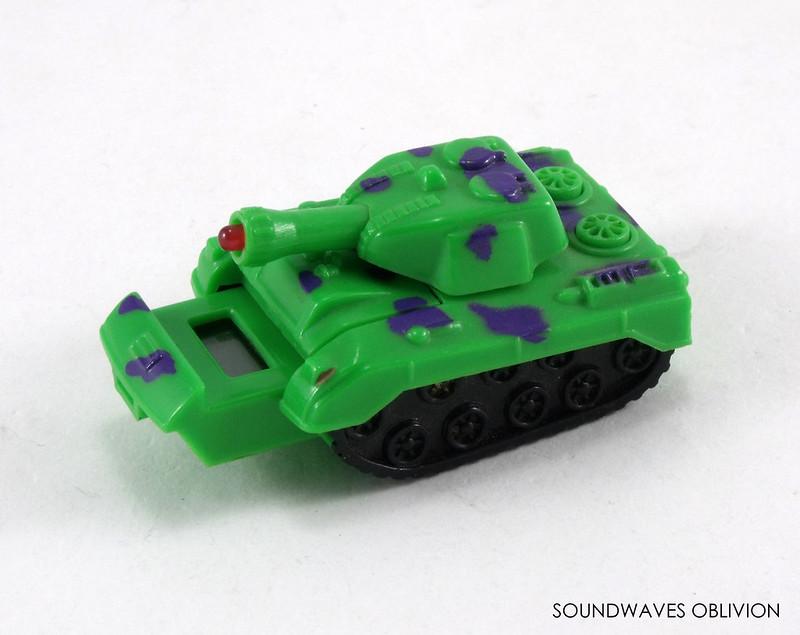 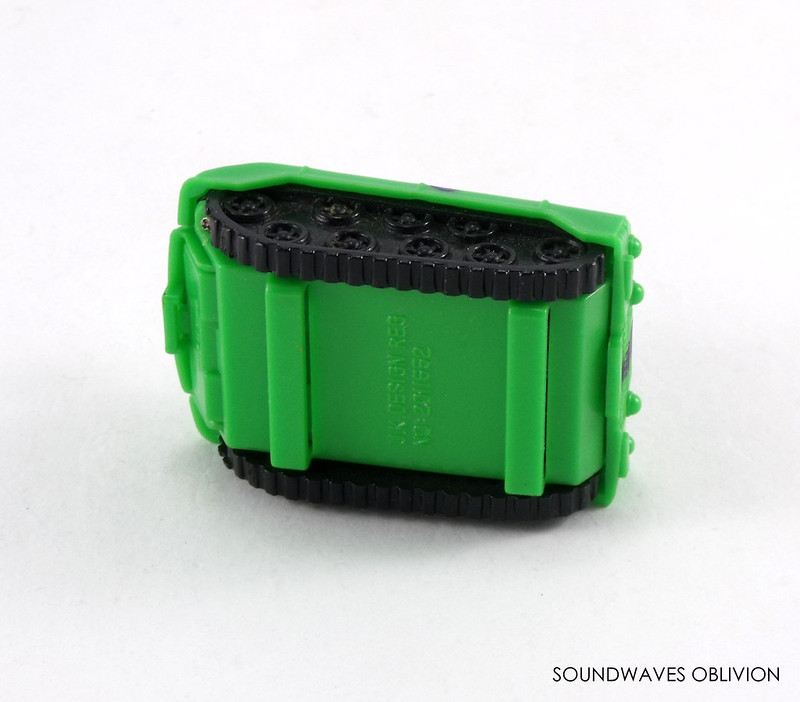 Below are Megatron's electronic sounds: 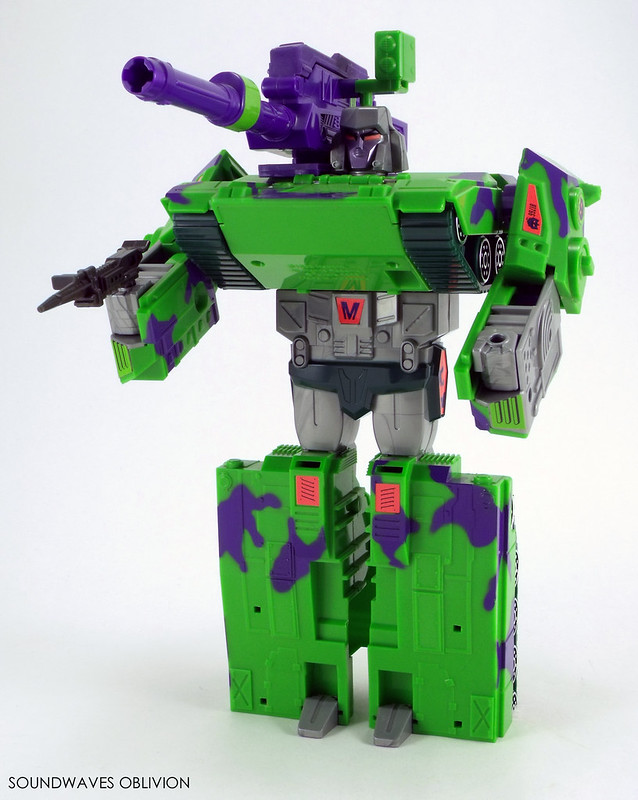