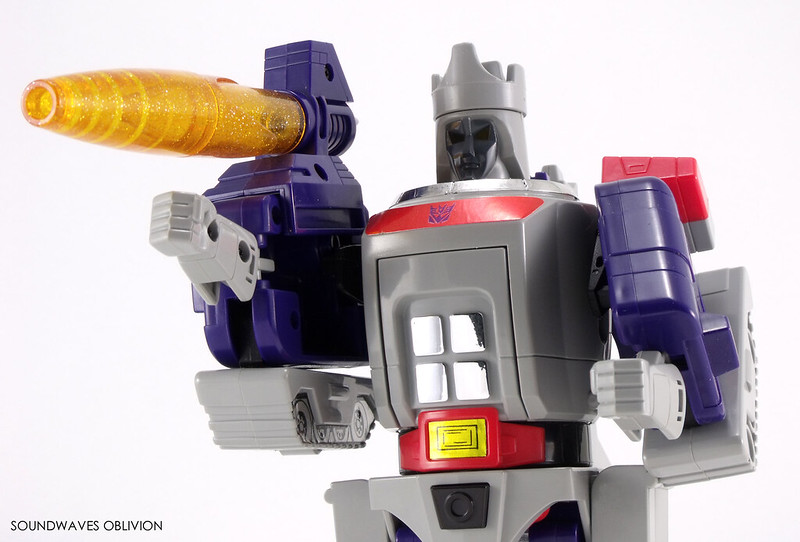 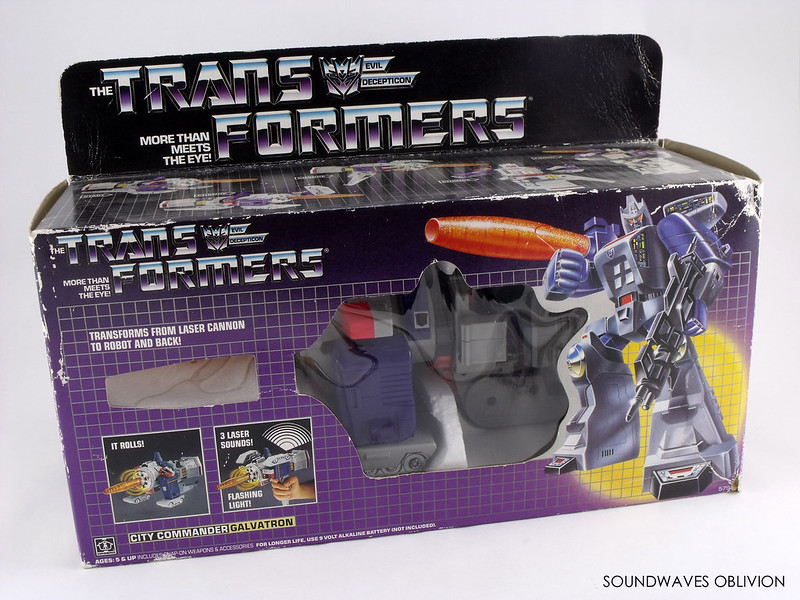 Many of the characters in the 1986 animated Transformers the Movie were designed by Filipino illustrator Floro Dery, continuing his role from the first 2 seasons of the original Transformers cartoon. Unlike Seasons 1 and 2, the majority of the cast were not going to be based on existing Diaclone / Microchange figures so Floro Dery designed all new character models for the likes of Cyclonus, Hot Rod, Kup, Ultra Magnus and Galvatron.


Incidentally Ultra Magnus' character model was not used as Hasbro opted to use the exiting Diaclone Powered Convoy toy, leaving the initial design unused. However the design was simplified and used in the Season 2 episode "War Dawn" as Orion Pax (Optimus Prime's original form). Floro Dery created the animation model first and then these were sent to Hasbro & Takara. In this interview he talks about how he came up with the design of Unicron.


Galvatron's initial complicated design is very similar to the finalised character model with the crown and shoulder pads being quite different although similar to the final toy version. The initial design was simplified, approved and then sent to Hasbro (design above); it was this design that was the basis of the toy design. It is the cannon mode which has colours very similar to the final toy model with the grey colour on the back of the canon mode and the rear stand. The robot mode cannon / cannon barrel is a smokey grey colour which is seen in the non transformable mock up of the Galvatron toy which was also shown within the 1986 pre-Toyfair catalogue.

It is usual for character models to drastically change long after potential toys have gone into production leading to many inconsistencies between the final toy and what is seen on the screen.


Galvatron's box art is also coloured slightly different from the toy which is seemingly based on the non transformable prototype of Galvatron seen in the 1986 Toy Fair catalogue (but with the corrected colours for he arm cannon). In between Hasbro & Takara creating the toy design for Galvatron, the animation studio Sunbow amended Galvatron's character model again which is the design seen on the screen. The helmet was modified, the shoulder pads are now upright and attached to the body and the knee design is hexagonal rather than rounded and not to mention that the colour scheme for Galvatron was now all purple. The Marvel comics design on the other hand used Floro Derys design for the body and included an amended head which closer resembled Sunbow's final design.

Another inconsistency with the G1 Galvatron toy is his background - in his bio it states he is "determined to lead the Decepticons" and his rank is 9. This would indicates Galvatron is not the Decepticon leader and is simply the City Commander, an equivalent to Ultra Magnus. There is no mention in his bio that Galvatron was once Megatron, again as the the backstory being used for the Movie was not finalised. Additionally Galvatron was scaled against Ultra Magnus as it was not known at the time that Rodimus Prime would the new leader, indeed Rodimus Prime's bio states his function is "Protector". Considering Floro Dery designed Galvatron with an arm cannon like Megatron's, you would assume it was envisaged Galvatron was an updated Megatron at the time. 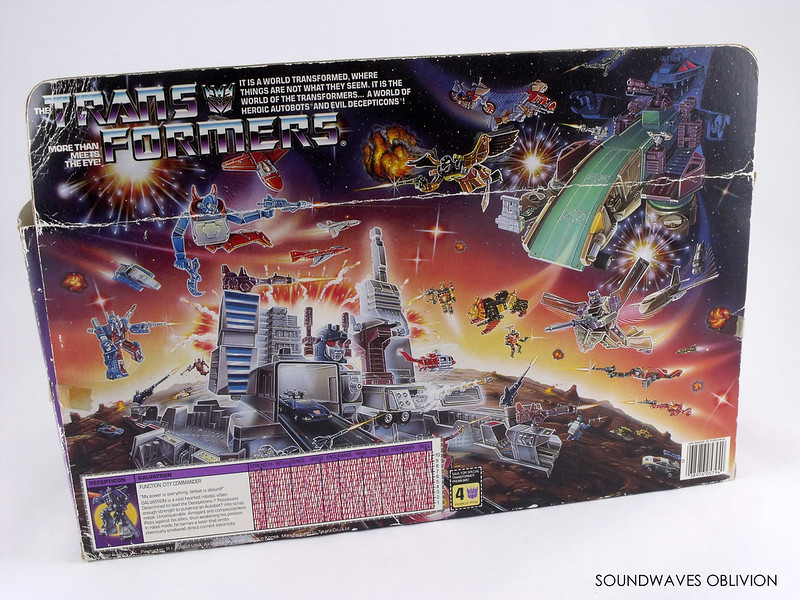 Things are slightly different in the Japanese continuity, although the toy's tech spec still has a rank of 9 and his function is "City Commander" on the back of the box and character card while his function on the front of the box is "Fortress Staff Officer" (this was changed to "New Emperor of Destruction" for the 2005 reissue), the bio states that Galvatron is the new Destron leader. Additionally when the Japanese only episode entitled Scramble City was released on video in April 1986, it was followed up by a "non canon" episode, again entitled Scramble City. This episode featured the transformer toys and was animated by the stop motion technique. The episode featured both Megatron and Galvatron as separate robots with Megatron ordering around Galvatron. This episode however was simply a toy advert. Although Transformers the Movie was not released in Japan until 1989, a voice over at the beginning of the Transformers 2010 series (Transformers Season 3) which aired in November 1986 explained the events of the movie including Megatron's transformation into Galvatron. 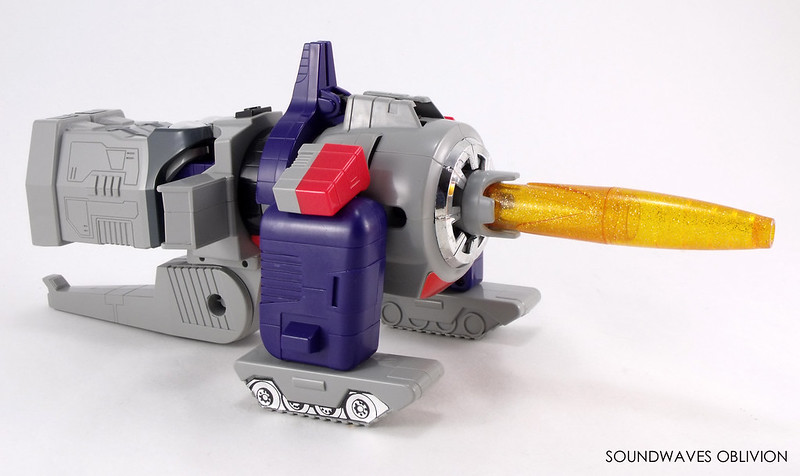 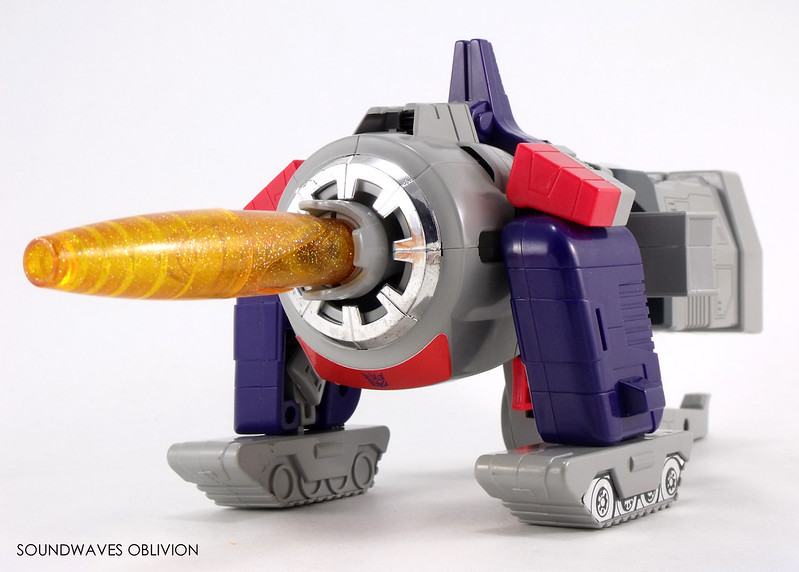 Galvatron comes boxed in Cannon mode and the box also advertises a third hand gun mode which is never seen in the animated series. The cannon mode is very static and there is no articulation in this mode whatsoever however the cannon is on wheels and can roll. 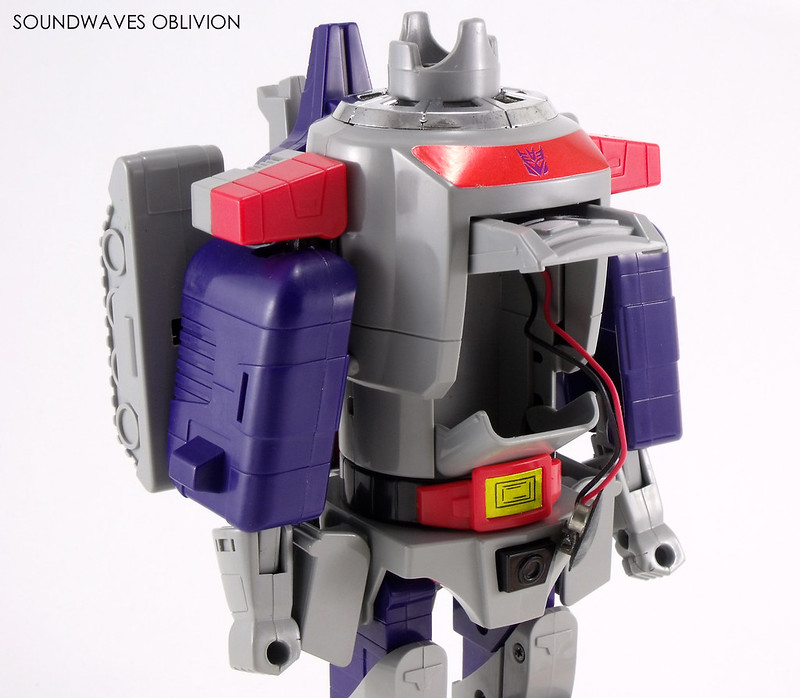 A 9v battery fits within Galvatron's torso and powers flashing lights and 3 individual laser sounds which can be changed with a switch on the back of the figure. In cannon mode there is a black button (on the robot mode waist) which you press to activate the lights and sounds. There is a light within Galvatron's head where the translucent orange barrel connects to so this makes the orange barrel glow when activated. Unfortunately with Galvatron the sound effects will degrade over time.


Hand gun mode is a simple transformation from the cannon mode, you basically pull the large handle down and there is a red trigger to press for the lights and sounds. 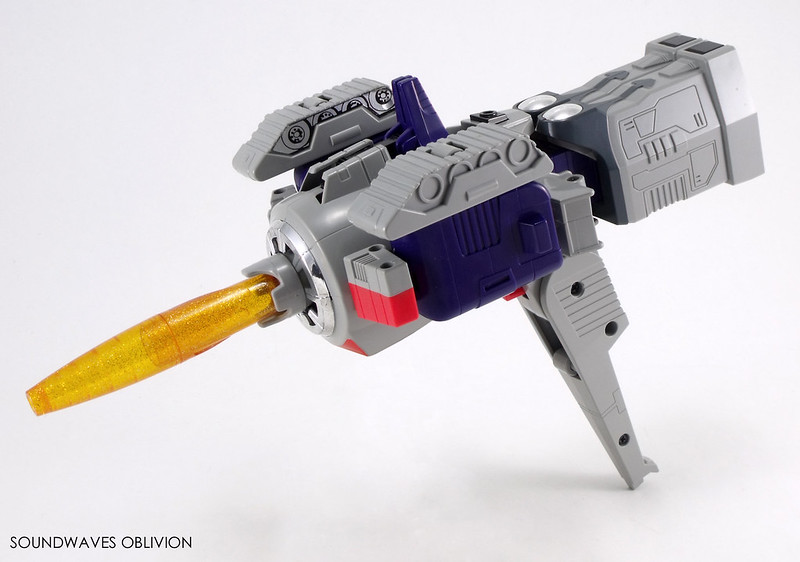 Transformation to robot mode is basic and easy. Galvatron stands as tall as Ultra Magnus in robot mode and towers above Rodimus Prime. Galvatron is also one of the most articulated G1 figures with bendable knees which are not part of any transformation and poseable shoulders. As well as his arm cannon Galvatron has a hand gun as well which was not seen in the animated series nor is really necessary considering the large arm cannon. 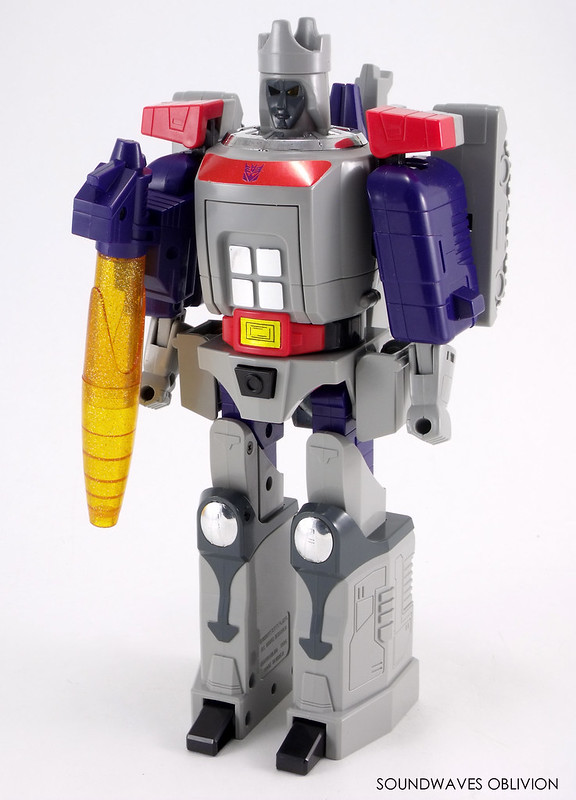 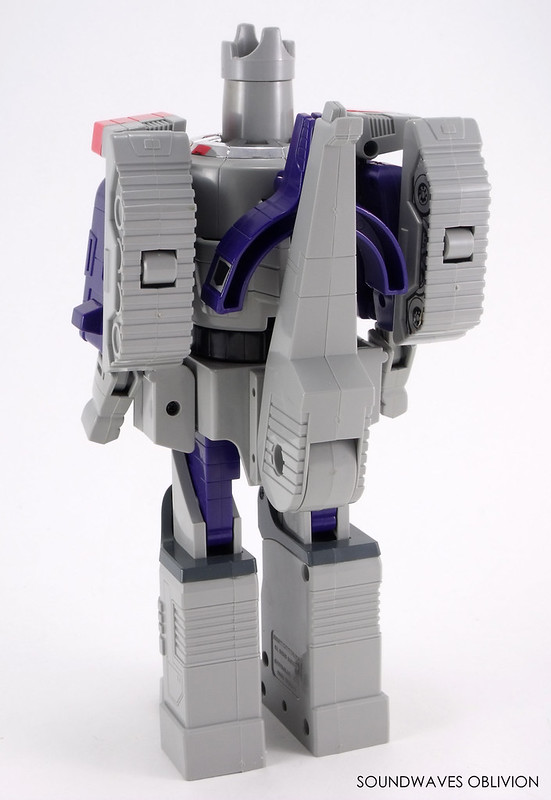 Galvatron was reissued in 2005 by Takara with a cartoon accurate deco and his eyes had been slightly remoulded. This Galvatron was also altered to take x2 AAA batteries instead of one 9v battery. Instead of three annoying 80's laser sounds, this Galvatron has 5 phrases from the original voice actor Seizo Kato:


The switch on Galvatrons back alternates Galvatron's sounds between the 5 voice clips to a laser blast sound and then the transformation sound effect. 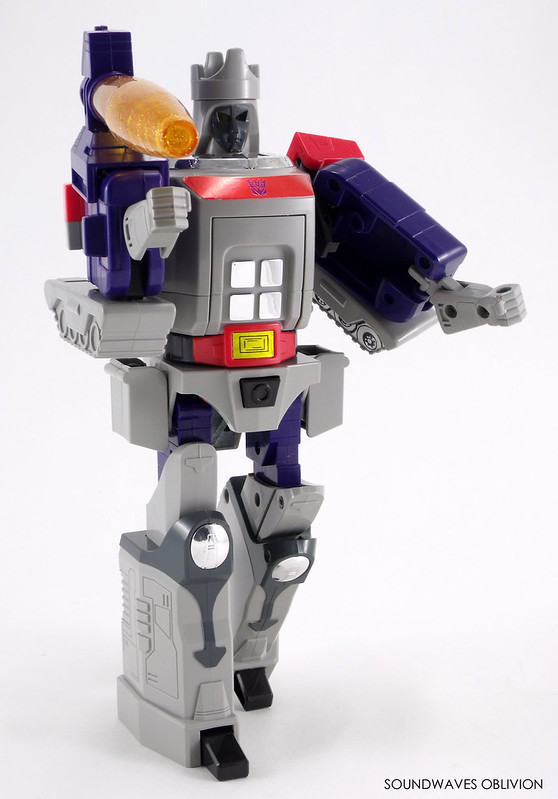 A second exclusive Galvatron, named Galvatron II was released the following year in the original toy colours. The figure comes with additional stickers to emulate the sparks from Studio Ox's well known illustration of Galvatron battling Ultra Magnus atop Metroplex. He comes with the same voice phrases but one, instead of saying "Destron army, Transform!", he says "Will you join me?". These voice clips were also reused for Masterpiece MP-36 Megatron. 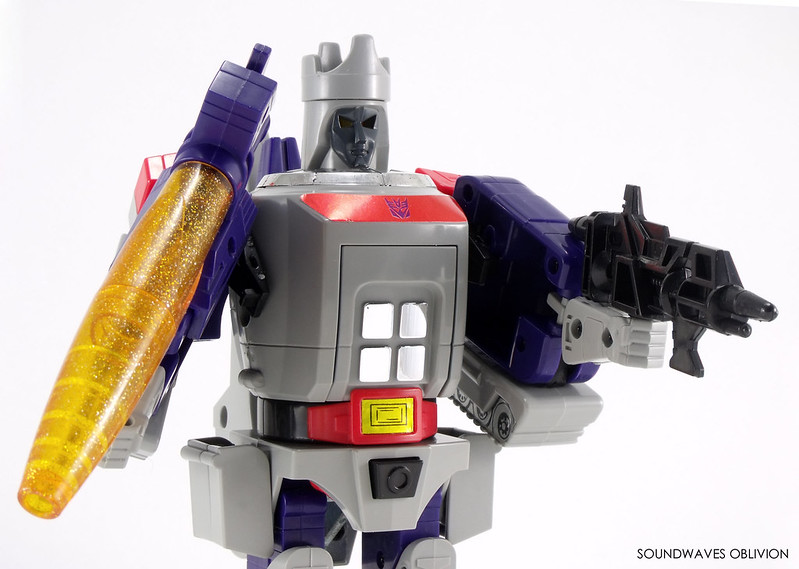 View the full gallery here on Flickr.com.
Posted by Jeremy Barlow at 08:40