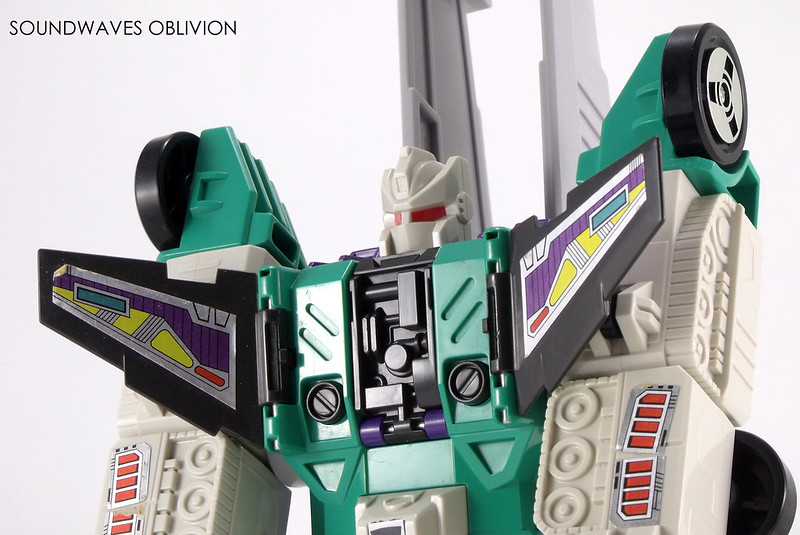 Decepticon Sixshot
Function: Solo Transformer Assault Group
Motto: "Life is worth living as long as there are enemies worth destroying."
A vile, nasty murderous sort who carries out his job with ferocious intensity. Only redeeming quality is he speaks well of those he's sent to "the great junkyard in the sky," his phrase for destruction. Has 6 forms: robot, armoured carrier (with twin laser batteries), ramming-tank (with infra-red rangefinder and target tracker), jet-propelled laser pistol, star fighter (maximum speed: 80,000 mph; range: 8 million miles), and wolf-creature modes. Only the wolf creature has no need for Sixshot's 2 hypersonic concussion blasters, the wolf mode prefers to rip apart enemy Autobots with his razor fangs.
STR:10; INT:9; SPD:4; END:9; RNK:7; CRG:8; FPR:9; SKL:8 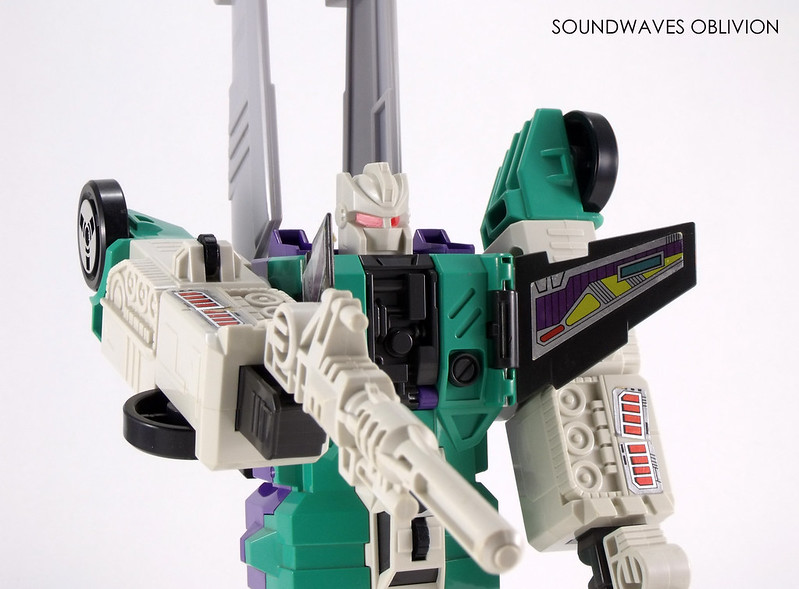 
As his name suggests, Sixshot is a six changer but unlike the triple changers who came before, Sixshots alternate modes are Cybertronian which allows for his original multiple forms. Released in 1987 retailing for around $34.99 USD & 3,980 Yen, Sixshot appeared briefly in the American Transformers cartoon The Rebirth where he demonstrated his one robot army functionality. In the Japanese cartoon continuity Sixshot is one of the main antagonists and ends up killing Ultra Magnus. In the Japanese cartoon a seventh "secret" mode is introduced as a winged wolf mode; additionally if you turn the gun mode upside down you have an eighth "submarine" mode introduced with the 2016 Titans Returns figure....

Sixshots robot mode is quite a tall figure and comes with two handguns, the only articulation the figure has is in the shoulders. 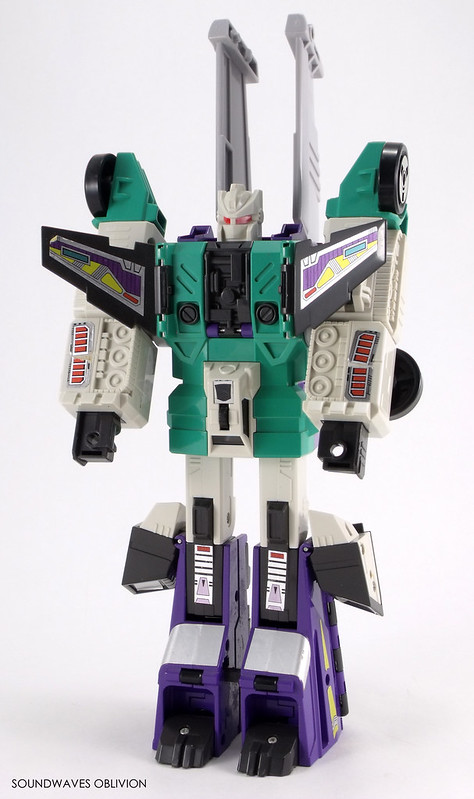 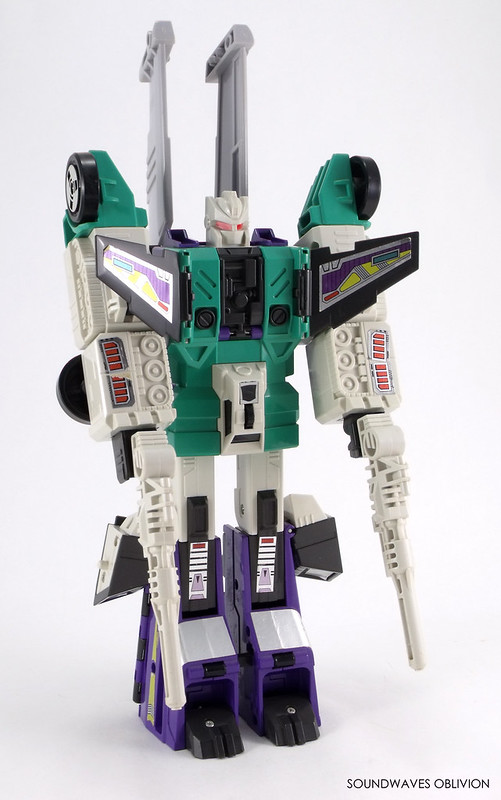 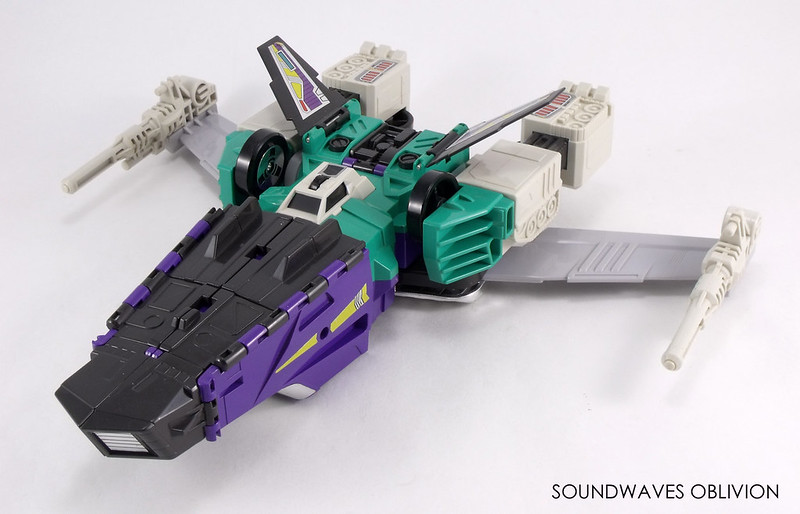 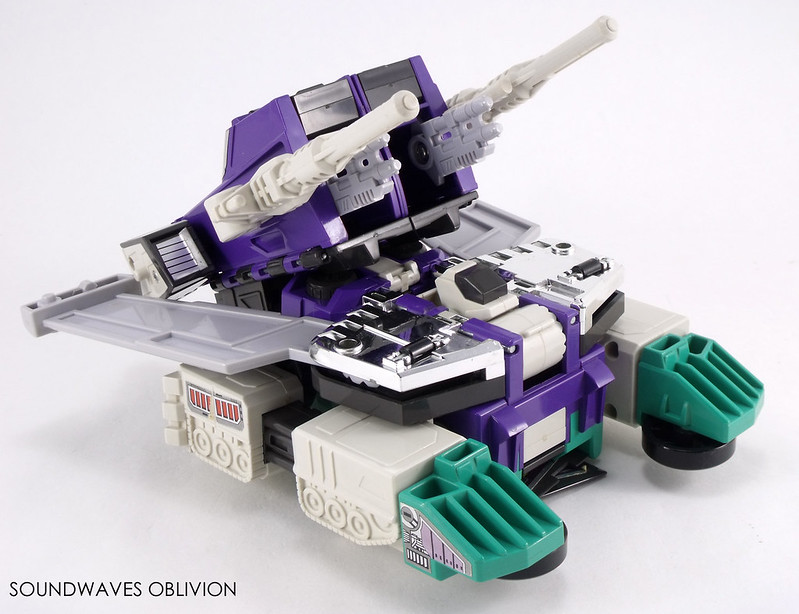 This mode was mistransformed in the instruction manual. 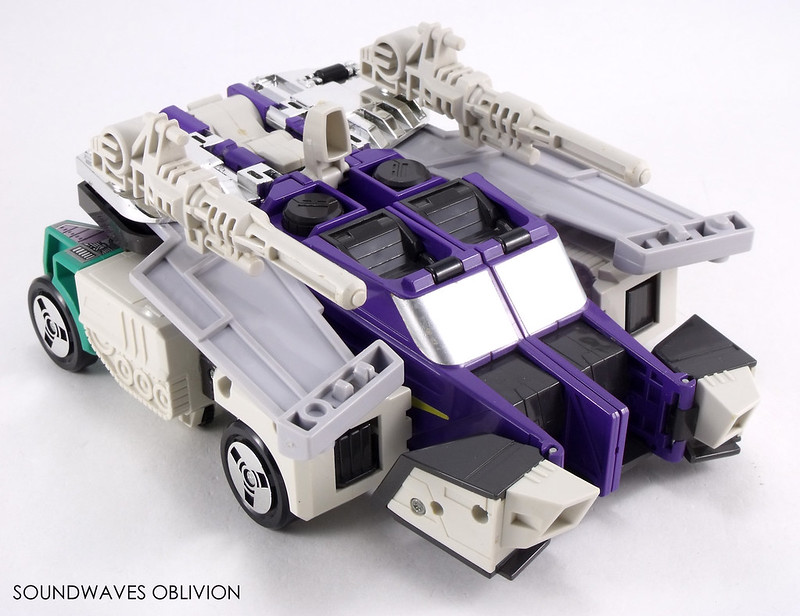 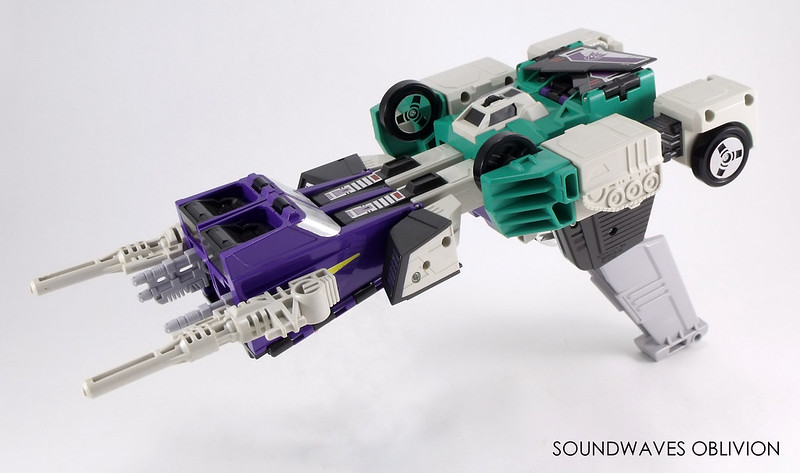 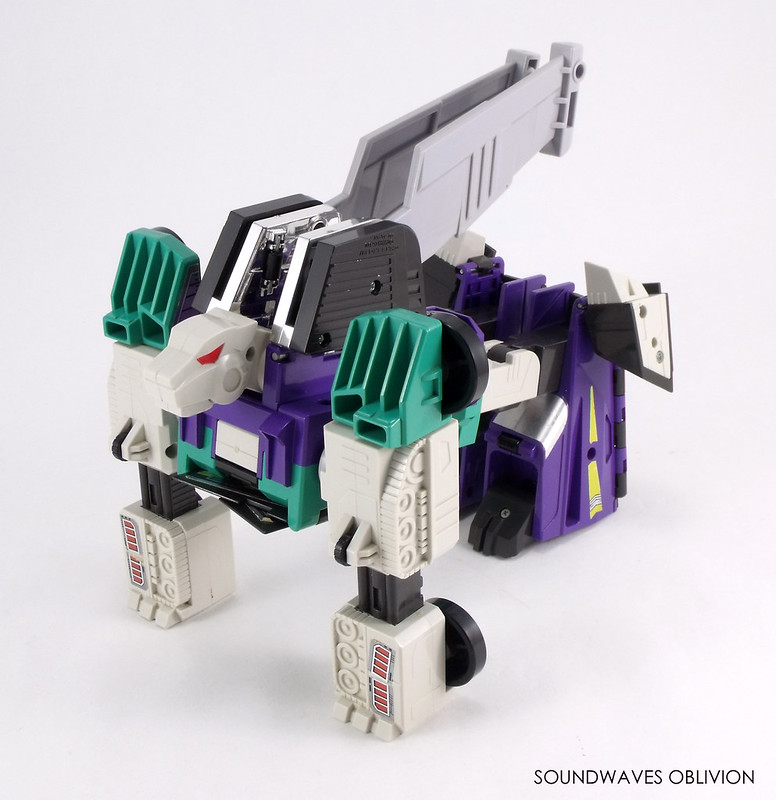 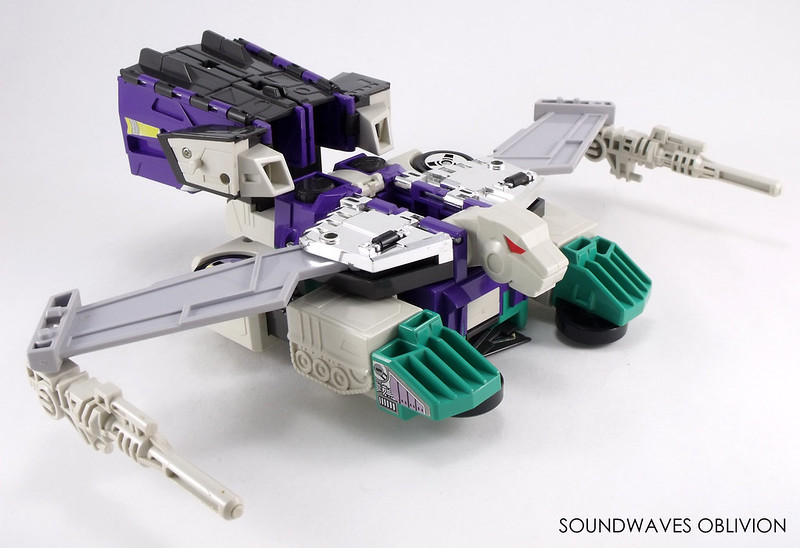 The Sixshot figure was remoulded, recoloured and released as a Cybertron / Autobot called Great Shot in the Transformers Victory series in 1989. The two characters had been described as past rivals but following the release of Great Shot in Transformers Legends in 2018 the accompanying comic retcons the continuity revealing that Great Shot is Sixshot.

In 1994 part of Takara's other transforming robot toy line Brave Police J Decker, among other Transformers remoulded and released in the Brave line such as Dia Atlas and Deszaras, a remould and repaint of Sixshot was released called Shadow Maru. Shadow Maru is predominantly purple with a remoulded robot head, shoulders, chest, chest fins and beast mode head. The post keeping the legs together has been removed from this version. Shadow Maru also features new accessories which include 2 new handguns, 2 throwing stars, a chrome sword, a sword hilt, a police badge and a small revolver gun. The box only advertises 5 modes omitting the gun mode however in the cartoon series Shadow Maru transforms into the secret Large Revolver Mode. The South Korean toy company Sonokong released Shadow Maru as Shadow Z in 1996 under their licensed Brave series. 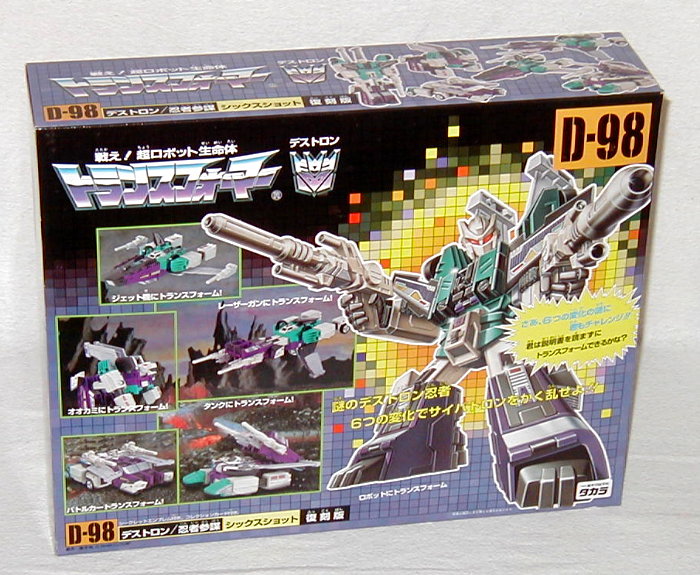 In 2002 Takara reissued Sixshot which was near identical to the original version. The only differences with the box being the new Takara logo and the figure was held in a clear plastic tray instead of a polystyrene tray.


The April issue of Hyper Hobby Magazine #43 featured a lucky draw for a clear plastic version of Sixshot called Sixshot Stealth Mode, limited to 10 pieces. This issue if the magazine also printed an original story for the figure.

In the April issue (released March 2002) of Japanese hobby magazine, Figure King #53, readers were given a chance to enter a draw to win 10 Sixshot "Stealth Mode" figures; based on Sixshot's occasional shadowy appearances in the Headmasters cartoon. The Figure King issue also printed an original background story for Sixshot Shadow Mode. The June issue of Hyper Hobby Magazine #45 also gave readers an opportunity to enter a luck draw to win a further 10 Sixshot Shadow Mode figures making this figure limited to 20 pieces overall. 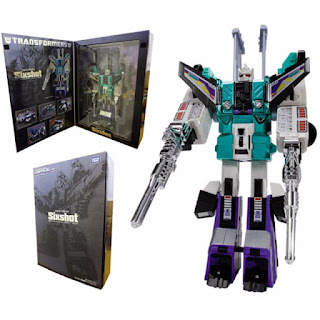 Initially released at the Animation-Comic-Game Hong Kong festival between 27th and 31st July 2012, this is a "premium" redeco of Sixshot featuring chromed and metallic paint work and comes in a book styled box packaged in robot mode. The initial release come with a collector's coin with artwork taken from a fan artist on DeviantArt.com without permission.


View the full gallery here on Flickr.
Posted by Jeremy Barlow at 23:03