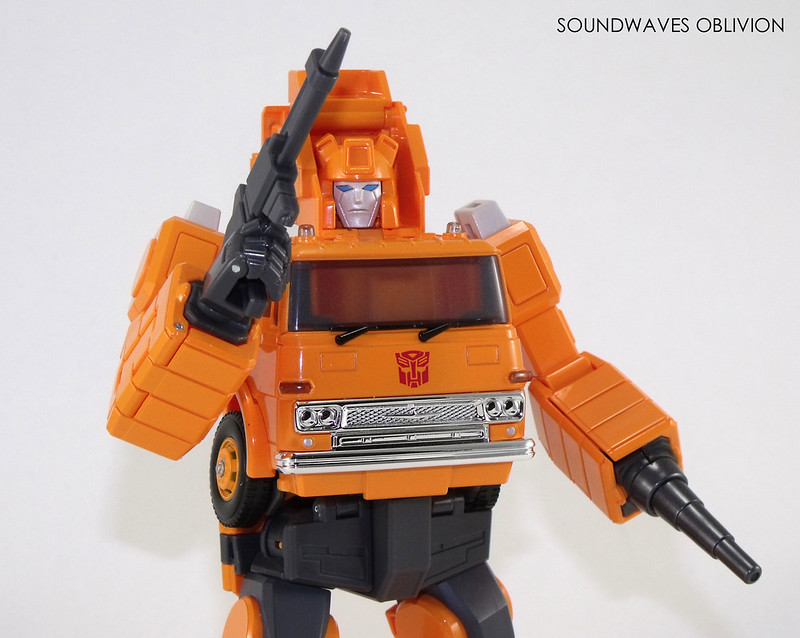 Profile (Translated from the Trading Card)
MP-35 Cybertron Architect Grapple
Function: Architect
Motto: “Beauty is in everything except war.”
Profile:
Architecture is his art, Grapples work on Seibertron was so highly regarded that his technology was used for war which he was deeply dissatisfied with. Humble yet proud of his duties. He hates it when buildings are destroyed in battle, when depressed he leaves himself open to attack.
STR:8; INT:8; SPD:3; END:4; RNK:7; CRG:7; FBL:7; SKL:9 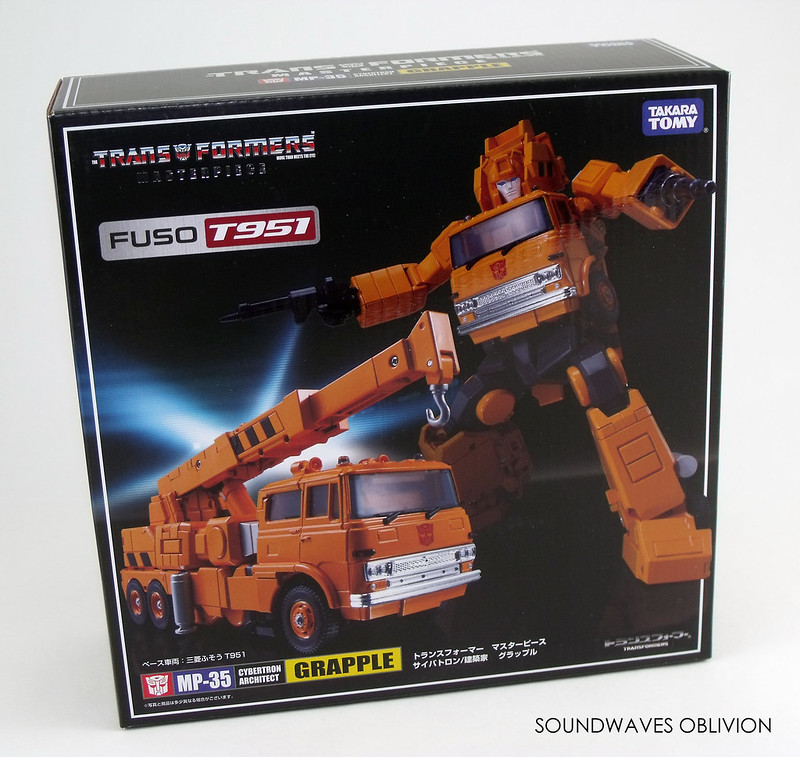 Masterpiece Grapple MP-35 was released at the end of February 2017 costing 15,120 Yen. Much like the original Grapple, he is a repaint and slight retool of MP-33 Inferno. The two share a similar transformation but as Grapples crane folds up in robot mode instead of a ladder this has a slightly different transformation. 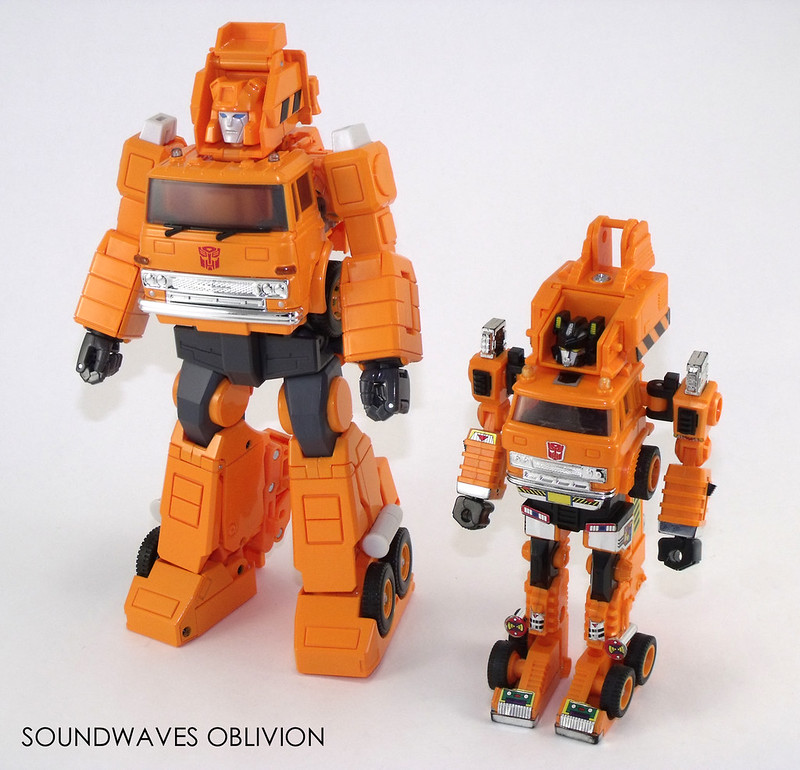 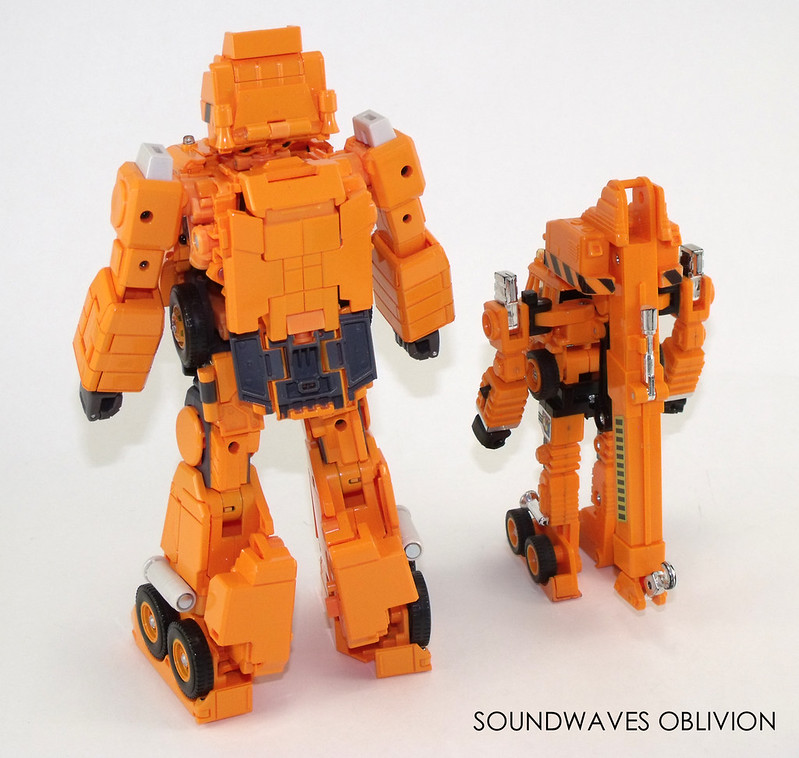 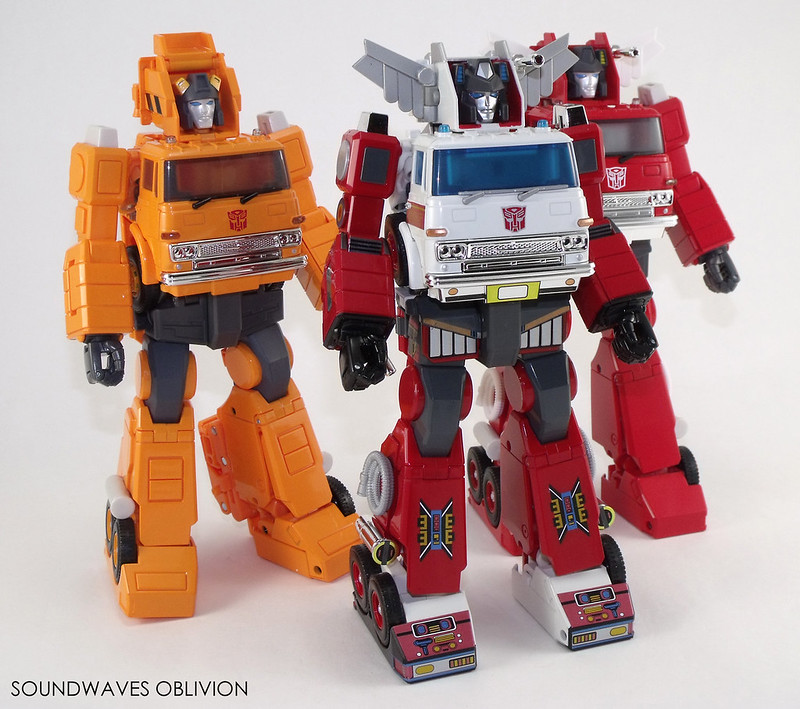 In vehicle mode Grapple is a Mitsubishi Fusi T951 Crane Truck and like MP-33 Inferno it is boxed in vehicle mode with the detailed chromed front grill attached; this can be swapped with the cartoon styled front grill. The crane can be moved upwards and downwards much like the original G1 Grapple however it cannot be extended. Vehicle mode comes with the hook attachment attached but this can be swapped with two other accessories, a grapple attachment and bucket attachment as seen in the G1 cartoon episode "Auto Berserk". The outriggers on the side of the vehicle mode can also be extended outwards and then downwards to ground level. Unlike my MP-33 Inferno, Grapple does not stay secured as well in vehicle mode although this could be the way I have been transforming him. 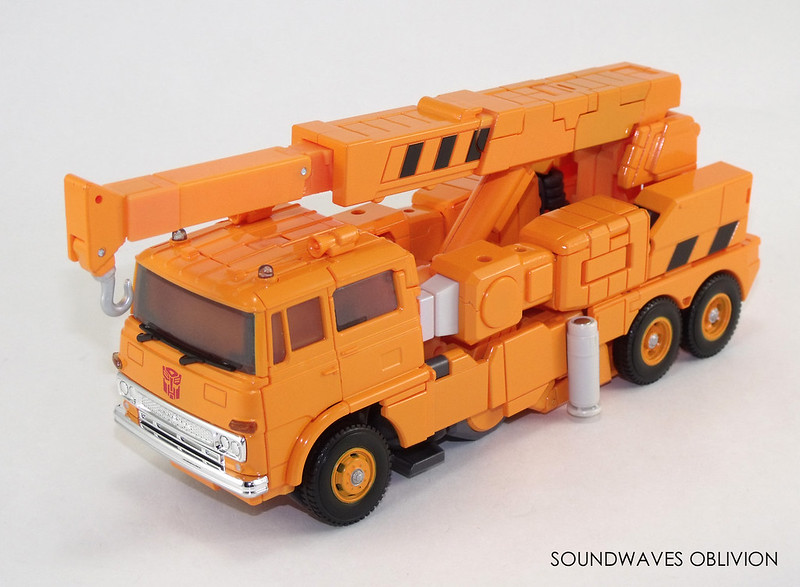 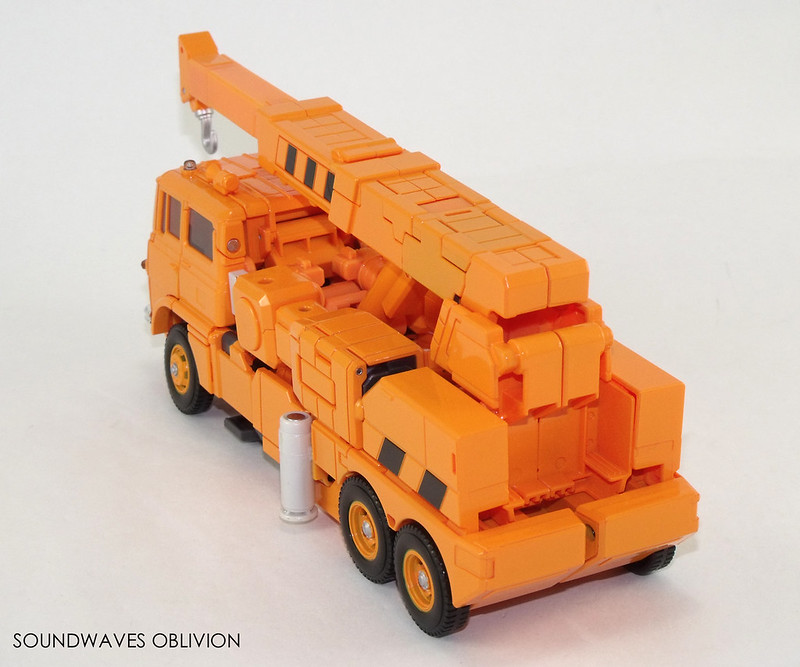 In robot mode Grapple comes with the orange helmet attached; he also comes with a secondary grey and orange helmet both of which were seen in the G1 animated cartoon. To replicate the G1 toy you can attach Infernos main helmet and attach Artfires silver face. Similarly with Inferno, Grapples left hand can retract, whereas Inferno's right hand is able to retract. A metallic grey muzzle comes attached but this can be exchanged for the chromed muzzle that comes with the set. Grapples right forearm also opens up where you can store the "tool" accessory. The Arc Welder Rifle that comes with Grapple is different to Infernos and is more accurate to the G1 toy. Grapple also comes with a small model of the Solar Tower from the G1 cartoon episode "The Master Builders" which he can hold in his hand; he also comes with schematics of the tower.
To differentiate Grapple from Inferno, the head section has been remoulded and there are minor differences to the side of the upper arms, the waist, shins and feet. On the back of Grapples legs there is an additional folded up section of the crane. Grapples waist swivel is also hindered by a flattened section of the crane although this can be folded back to allow movement. 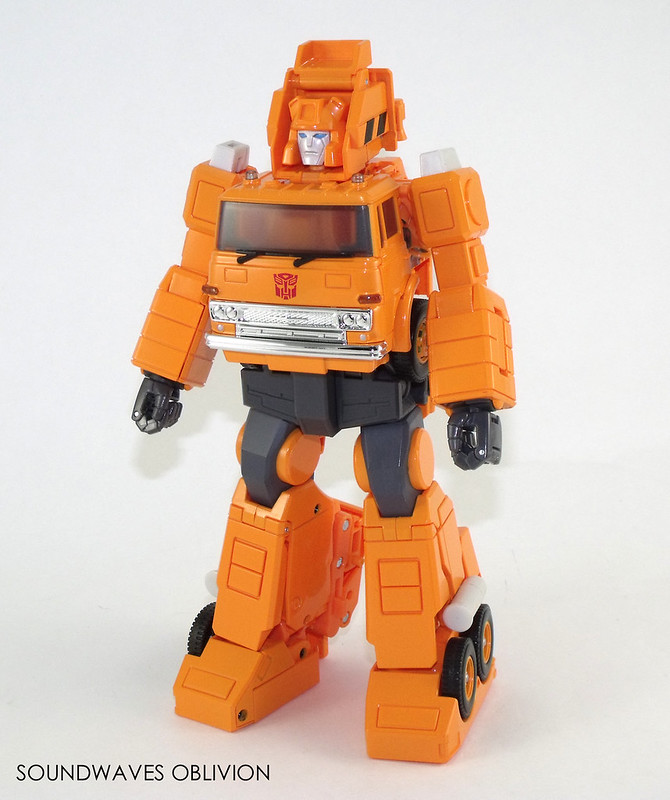 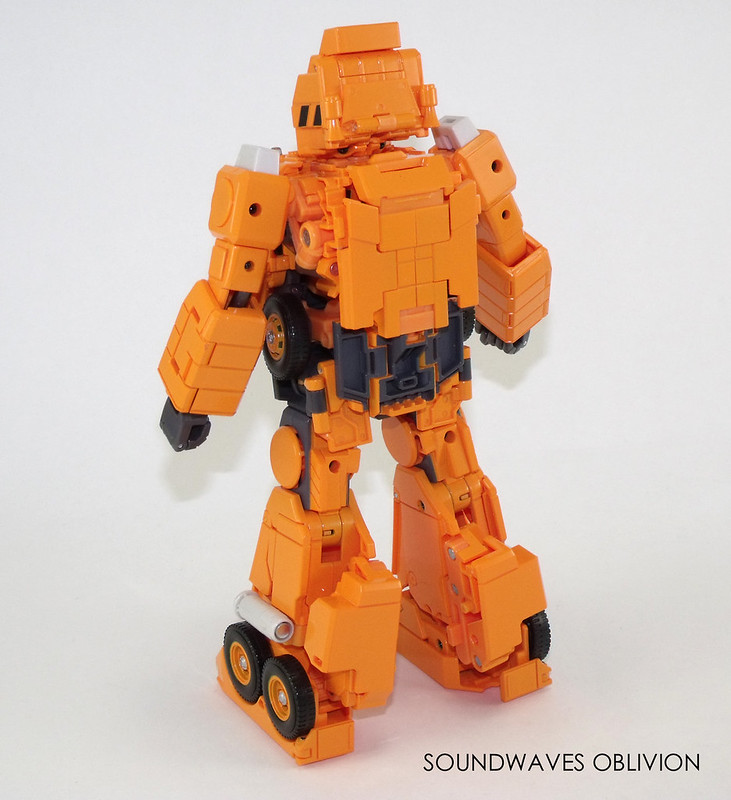 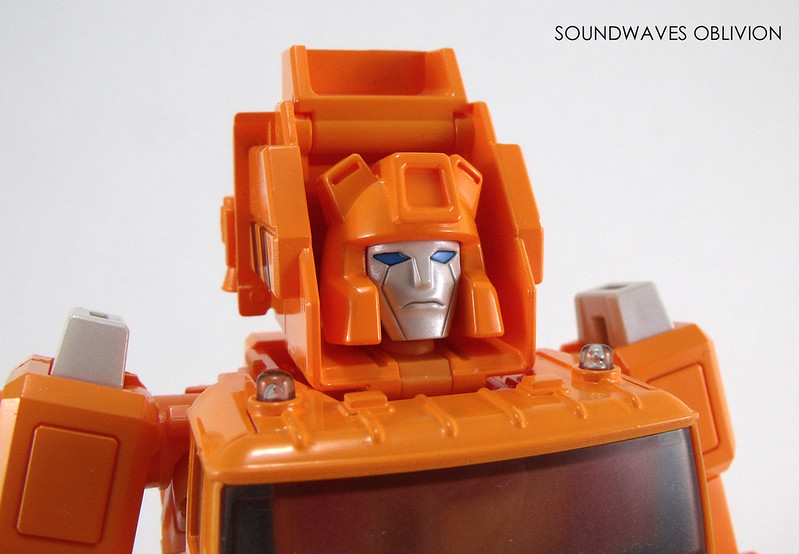 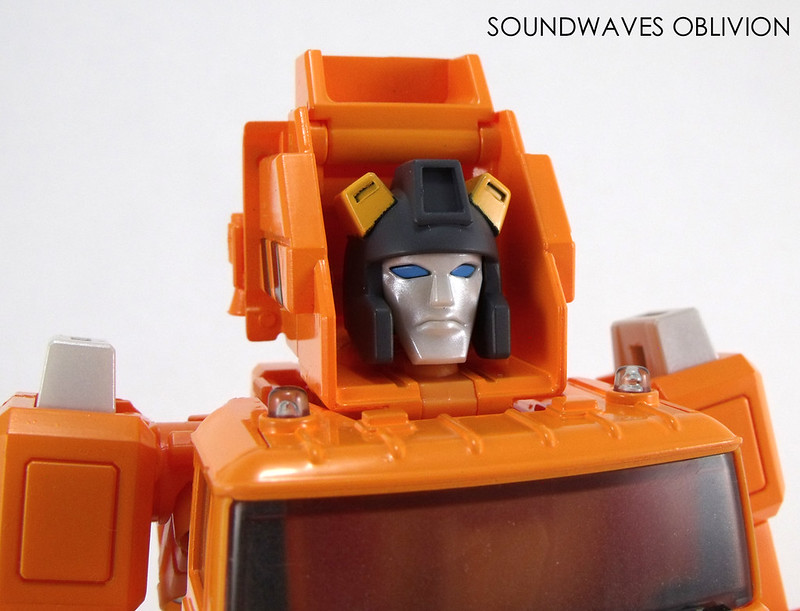 Overall Grapple is a good representation of the original animation model, Grapple is my favourite out of the Mitsubishi Fusos released so far but I find Inferno works a lot better as a figure. 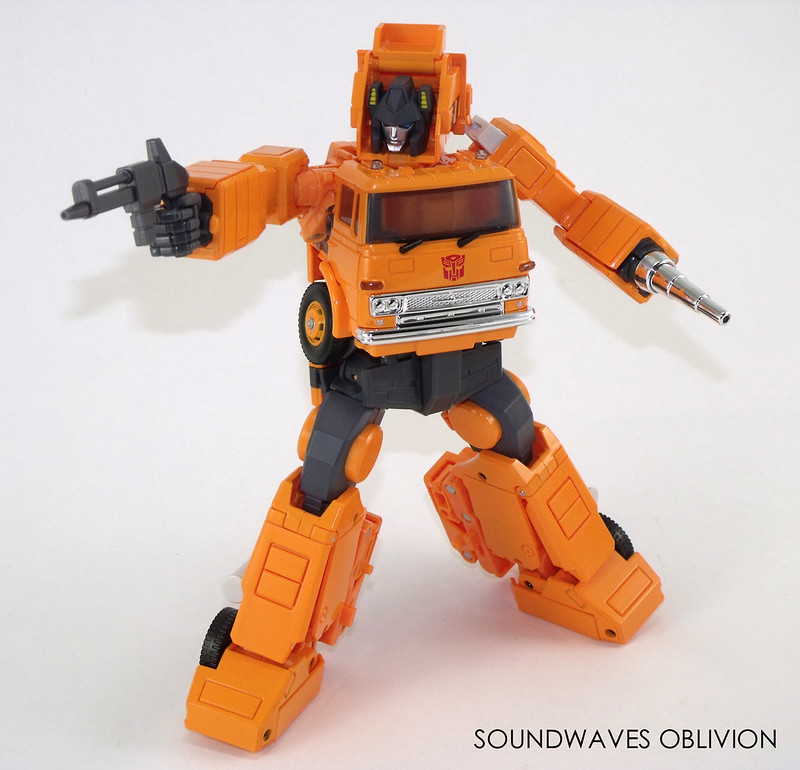 Vehicle Mode: Crane (Translated from the instruction pamphlet)
Everyone pictures Grapple’s vehicle mode as a crane truck, representative of a “utility vehicle”. Despite his powerful appearance similar to Inferno’s, he very rarely fights on the front line. He specialises in supporting those on the front line; he works closely with Hoist removing rubble, constructing buildings and repairing allies.
Has enough power to lift 35 tons with his crane. In battle while maintaining a static stance in vehicle mode he can throw debris and rubble over the enemies heads. He is highly technical and can perform precise and intricate work, an excellent architect who supports the Cybertron warriors.
He once however failed to operate his crane whilst repairing an airport which had been damaged by the Destons. He could not contain his own shock as he was so sure of his technical skill more than anyone else. The cause of the failure was a deficiency in Seibertronium; it is impossible for him to fail as he is “highly professional”. 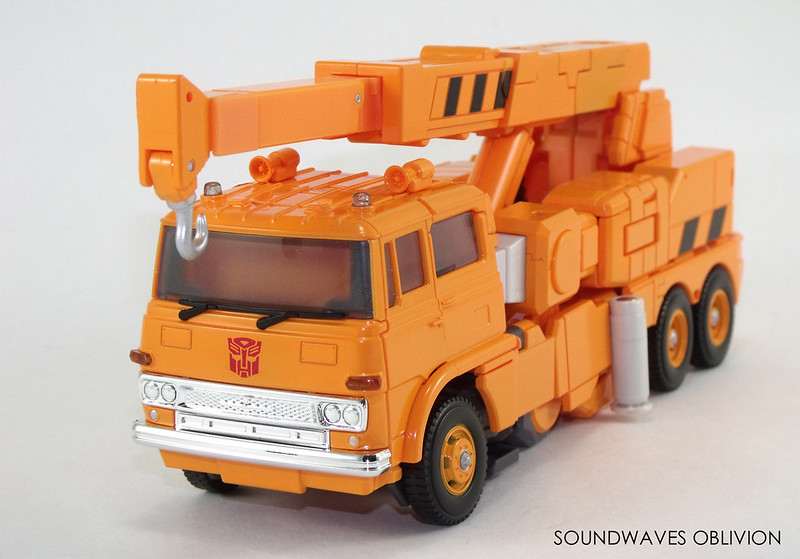 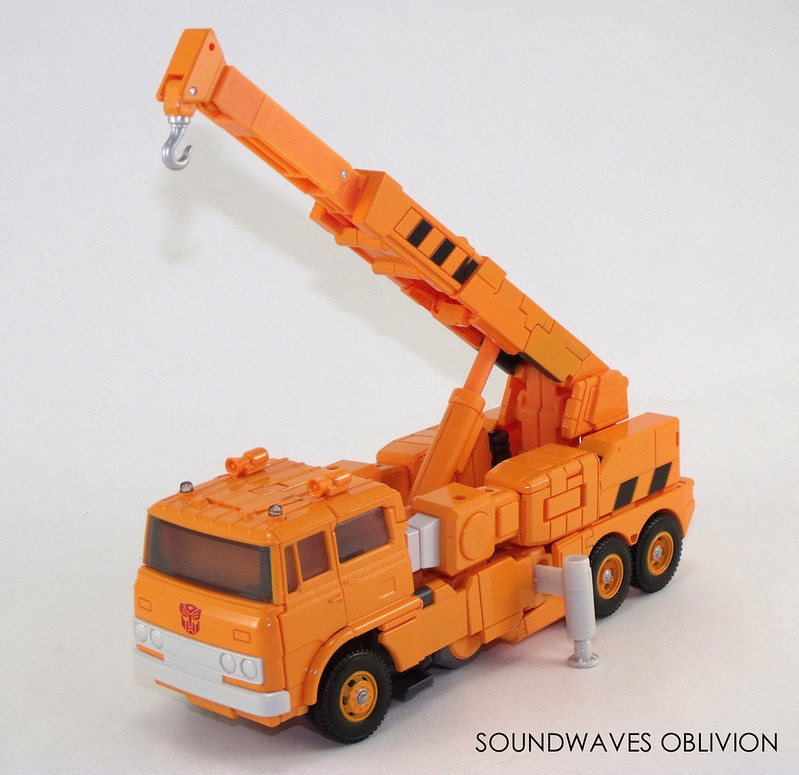 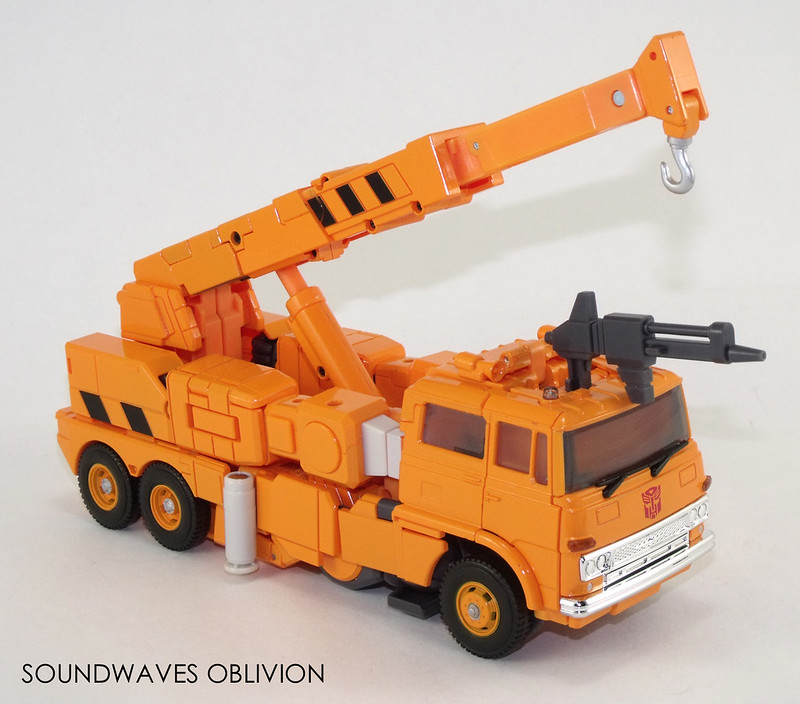 Robot Mode: Grapple (Translated from the instruction pamphlet)
Function: Architect
Motto: “Beauty is in everything except war.”
Profile
Grapples architecture on Planet Seibertron was once called art, on Earth however Grapples techniques are used for war. He is dissatisfied with this but his humble nature keeps his feelings on this this below the surface and he quietly goes about his duties. He takes his work seriously and as such, when his secret silo was destroyed he expressed his anger. The empathy he feels when his buildings are damaged shows he is still an architect at heart.
It was during the construction of the Solar Tower that his old architect self came to the surface. His plan was dismissed by Commander Convoy yet he tried to complete it anyway with the help of the Destrons; he is not just a warrior but an artist. He is not a dreamer; even if it’s impossible now, one day his dream will be realised and he will be an architect once again; until then he will continue fighting as a Cybertron warrior. 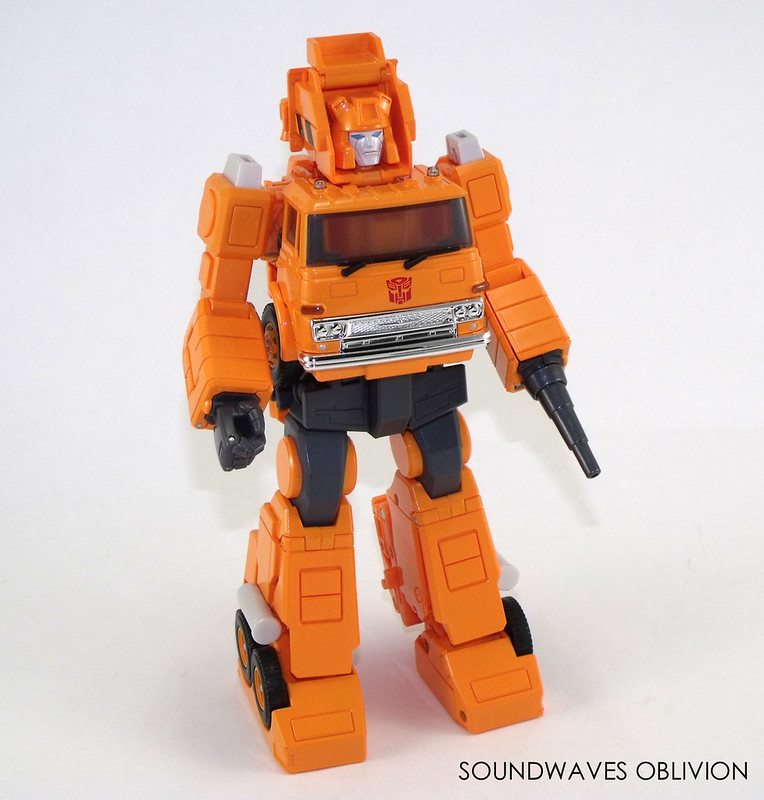 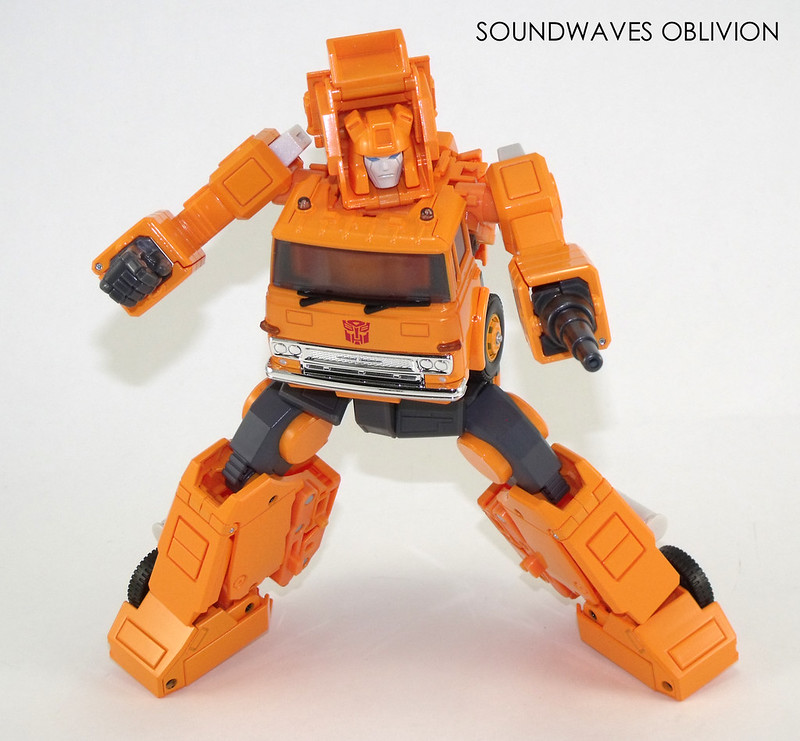 Weapon: Arc Welder Rifle (Translated from the instruction pamphlet)
Grapples Arc Welder Rifle can fire heat rays. During peacetime it is used for building, repair and maintenance but it can also be used in battle as seen in “Fight! Super Robot Lifeform Transformers” episode 23 “Capture The Negavator”. The heat rays emitted from the rifles muzzle demonstrate a truly destructive power at close quarters. 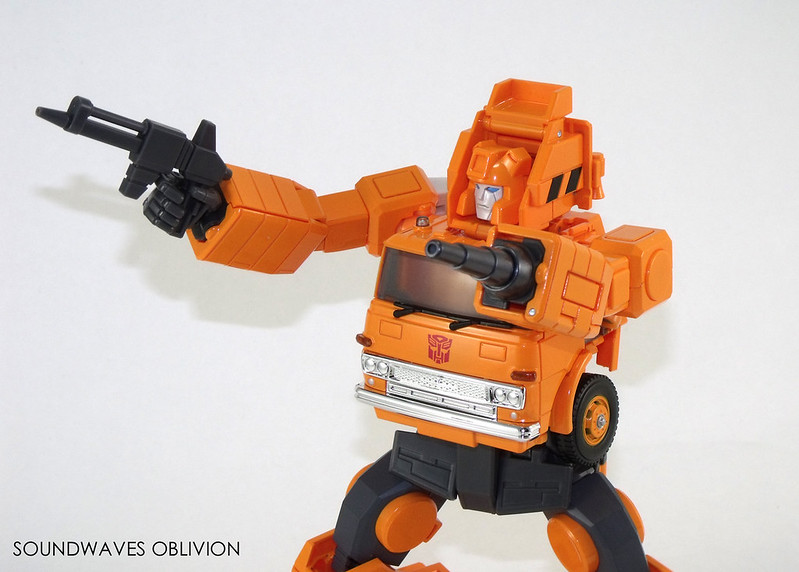 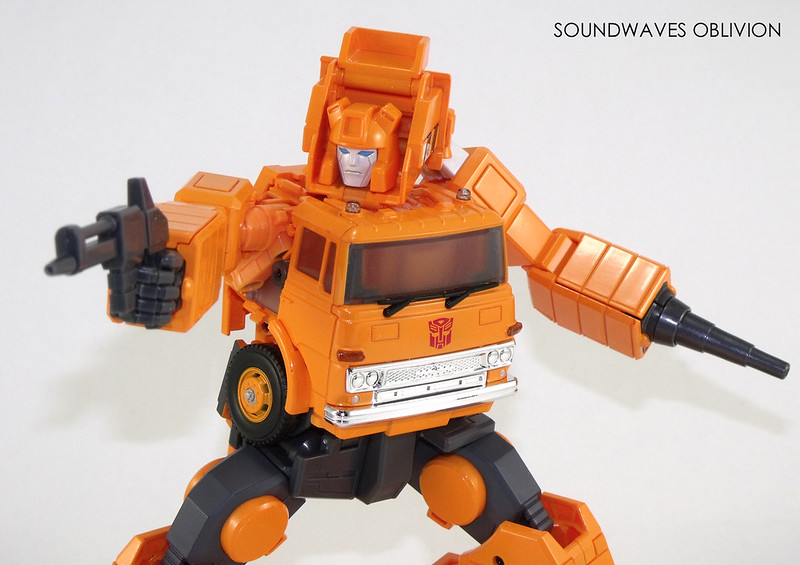 Equipment: Grapple Attachment & Bucket Attachment (Translated from the instruction pamphlet)
The attachment on Grapples crane is normally a hook but this can be changed depending on the situation. A grapple can be used for lifting obstacles out of the way such as rocks; in “Fight! Super Robot Lifeform Transformers” episode 23 “Capture The Negavator” the bucket attachment was used to attack where it had scooped rocks out of the way and while risen in the air he emptied it over the enemy. 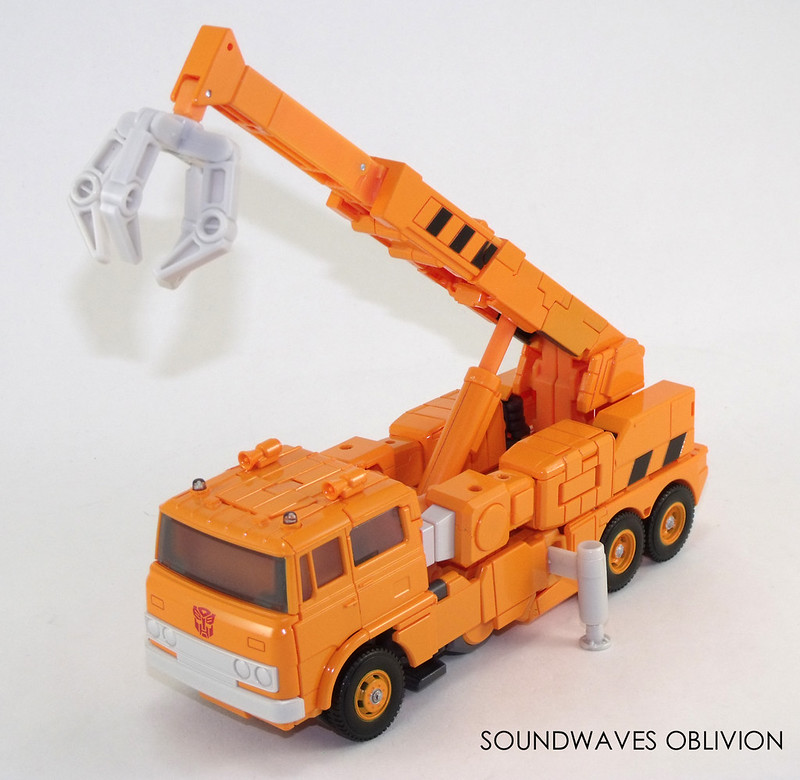 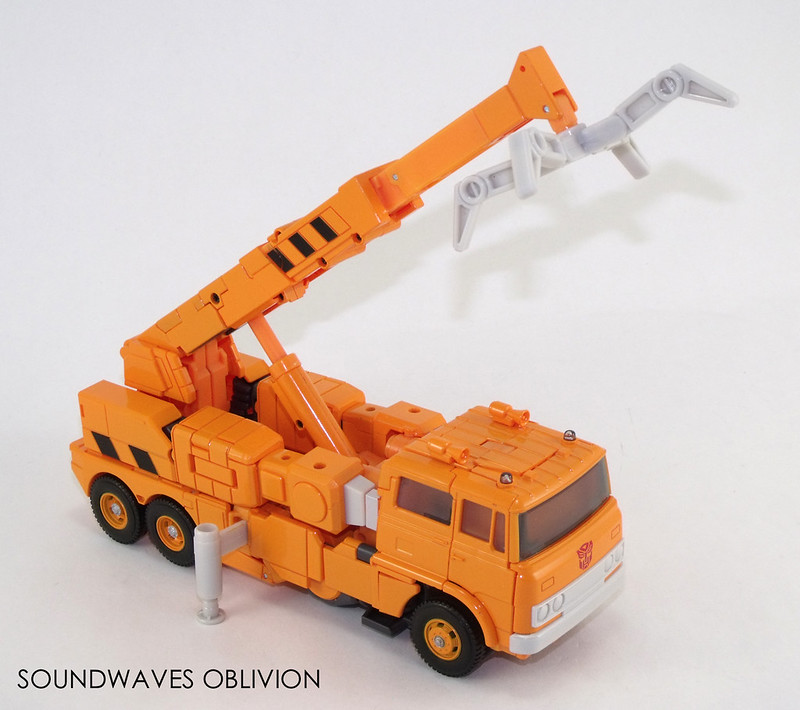 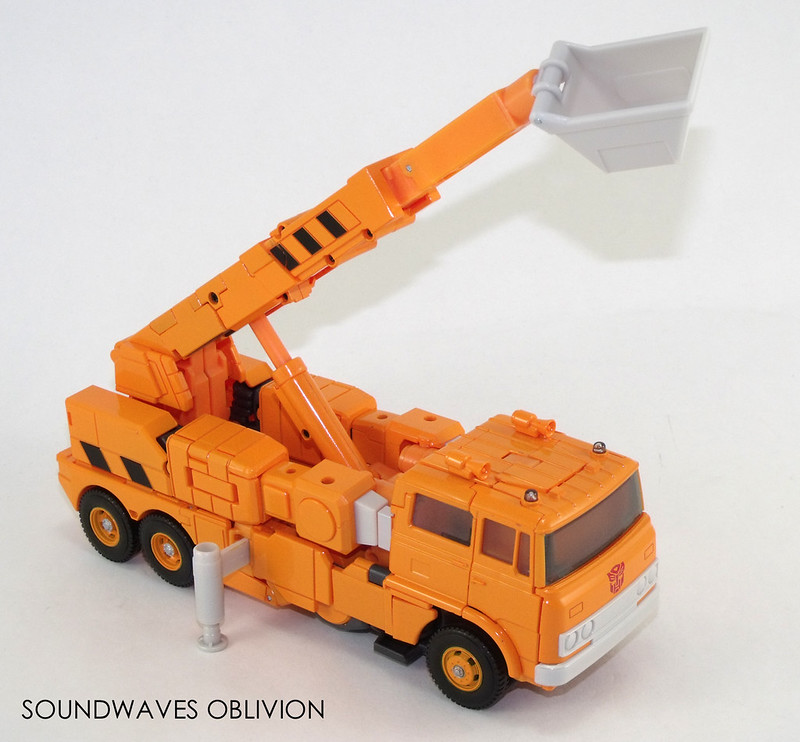 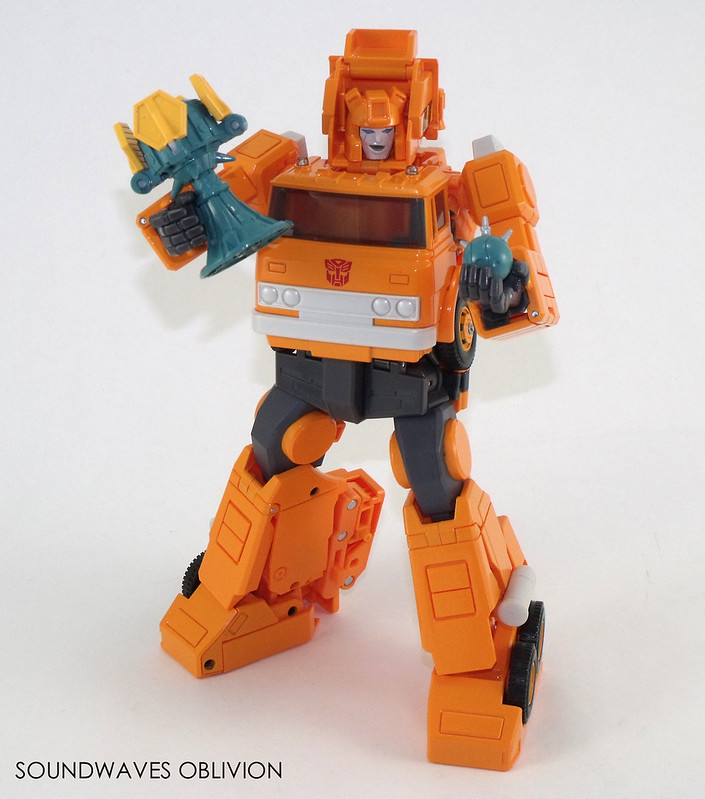 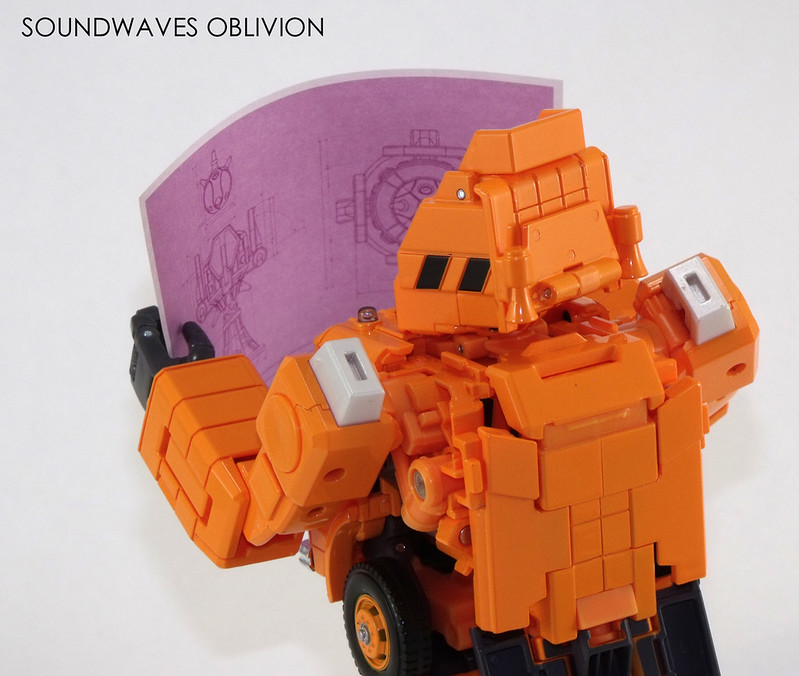 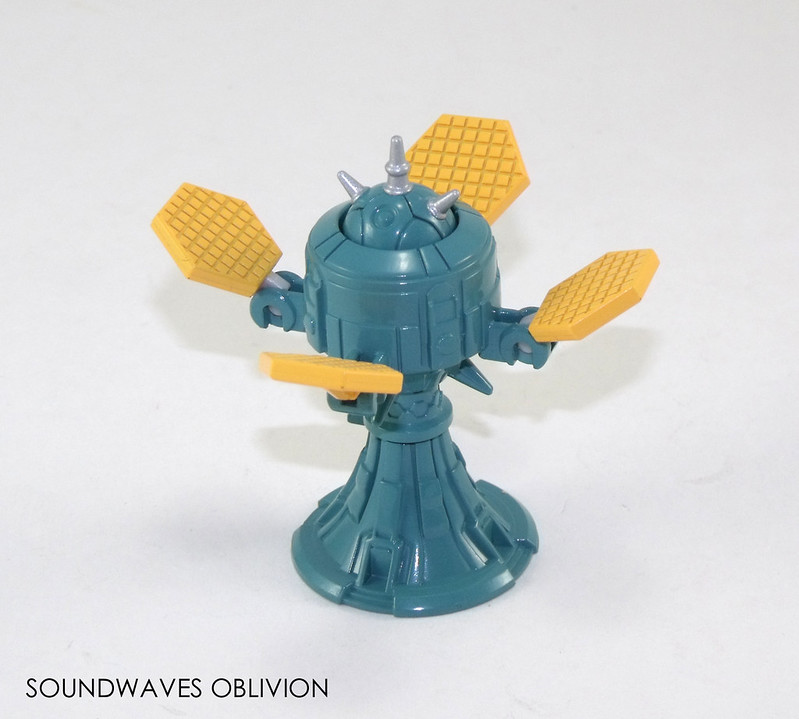 Equipment: Tool (Translated from the instruction pamphlet)
A tool used to assemble the Solar Tower model with his friend Hoist at the beginning of “Fight! Super Robot Lifeform Transformers” episode 19 “Master Builders” in which Grapple plays a prominent part. 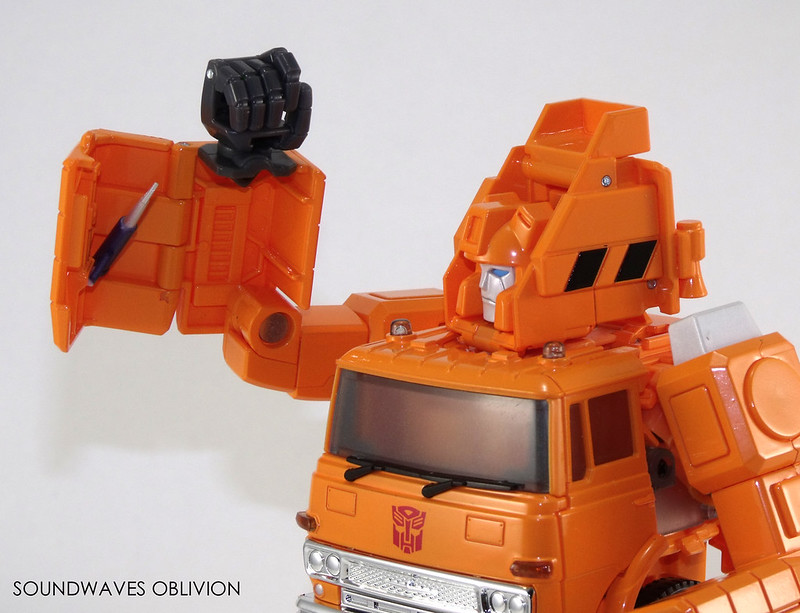 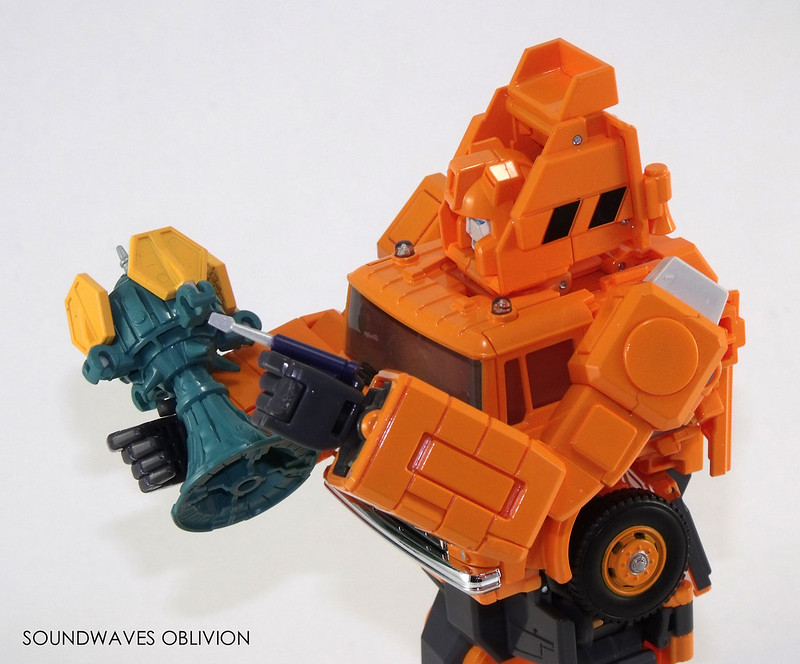 View the full gallery here on Flickr.
Posted by Jeremy Barlow at 22:08