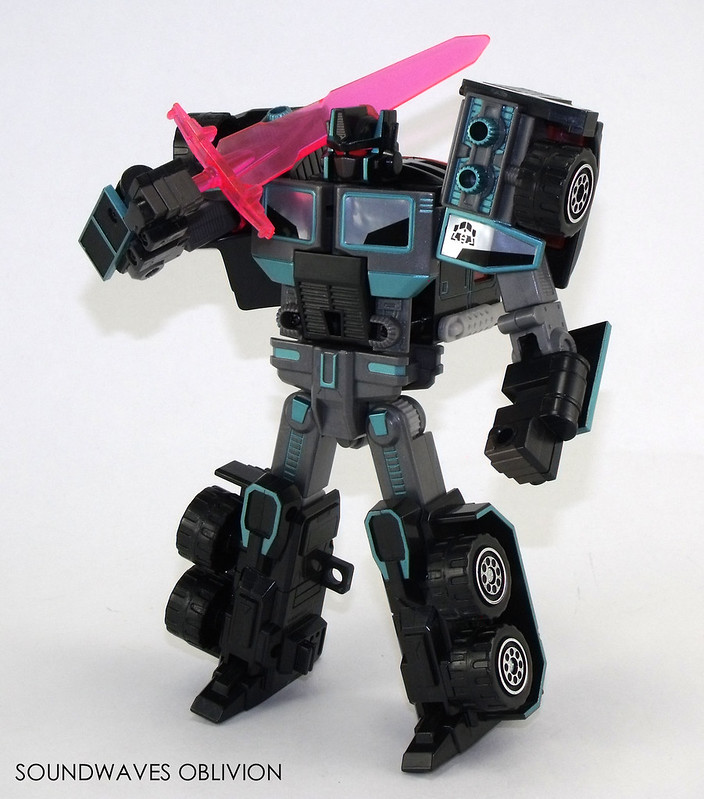 Profile (Translated from the Trading Card)
Black Convoy D-012
Destronger Dark Commander
Transforms into a tanker truck. His amazing physical resemblance to Fire Convoy is the result of a simultaneous scanning of a tanker truck and Fire Convoy, but besides that, he seems to have a number of secrets yet hidden. His tanker portion can split apart, unfolding to become a battle base that boasts enough firepower to equal 12 Combatrons. Black Convoy specialises in swordsmanship, and is after not only Fire Convoy's head, but Gigatron's as well.
STR:10; INT: 10; SPD: 10; END: 8; RNK: 10; CRG: 10; FPR: 10; SKL: 10 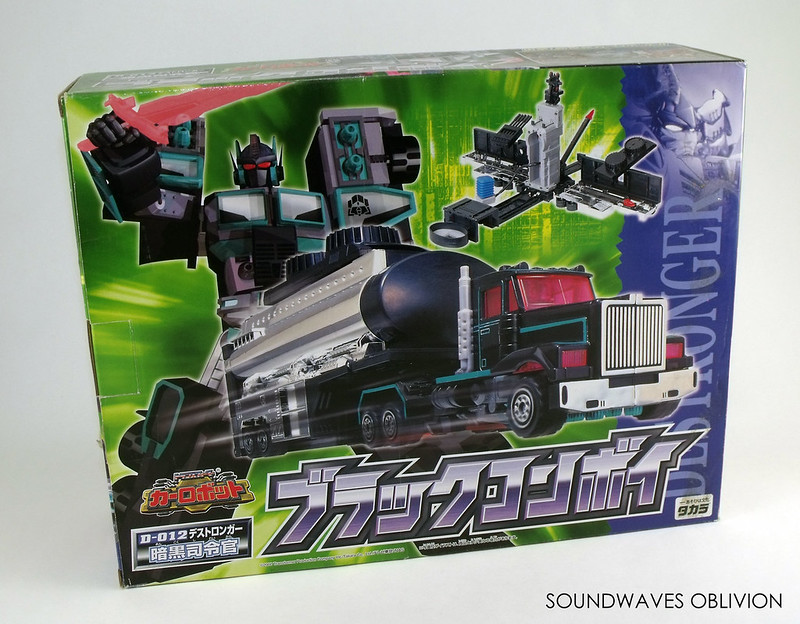 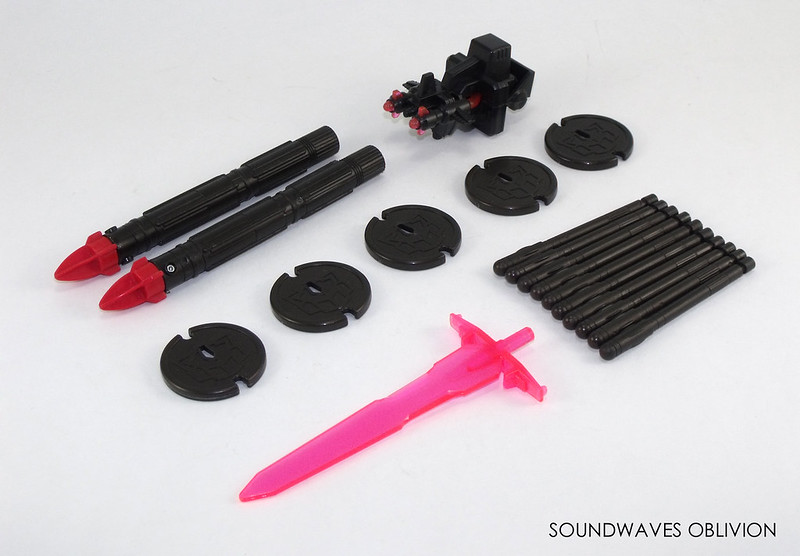 Car Robots was released in 2000, a time when many wanted the return of vehicular based Transformers after the run of the Beast Wars Transformers since 1995 (and in Japan since 1997). At the time Car Robots was only released domestically in Japan, the Cybertrons were Earthen vehicles and the Destrongers were a mixture of beast Transformers as well as vehicles. 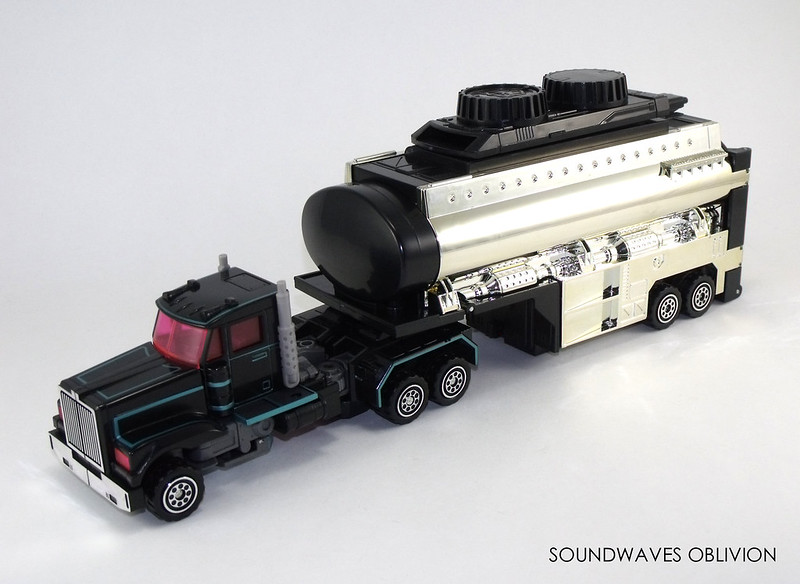 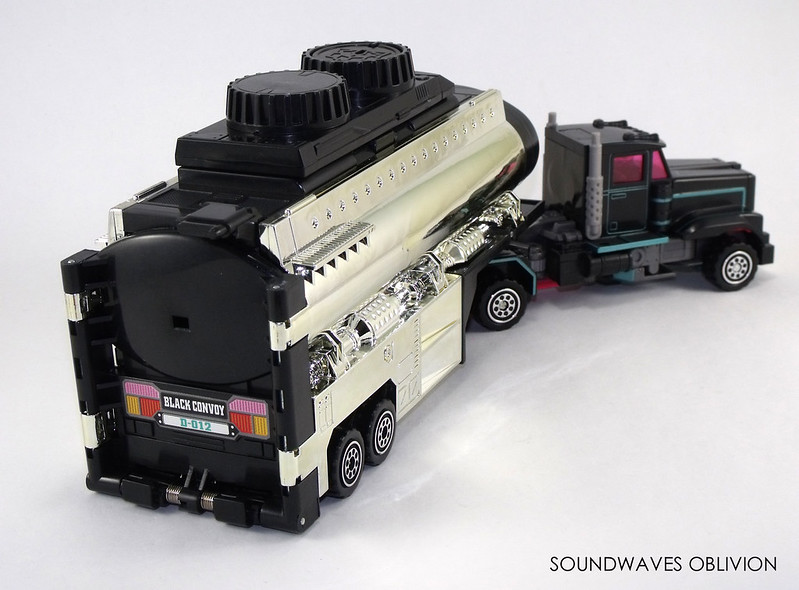 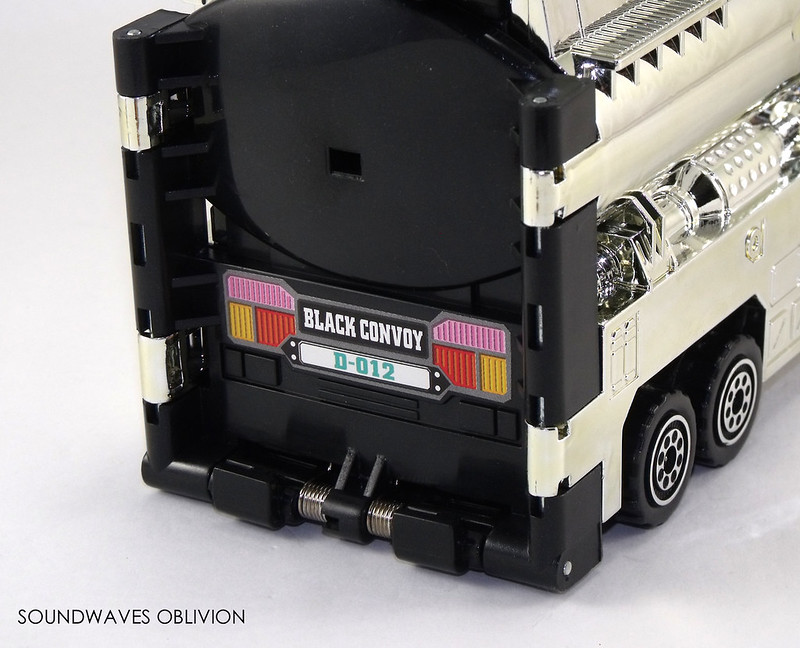 The majority of the Cybertrons were new moulds, although a few were recoloured "Gobots" from Generation 2 as well as a few flip changers from Machine Wars which were not initially released in Japan. The final Cybertron to be released was Brave Maximus, a redeco of Fortress / Grand Maximus. 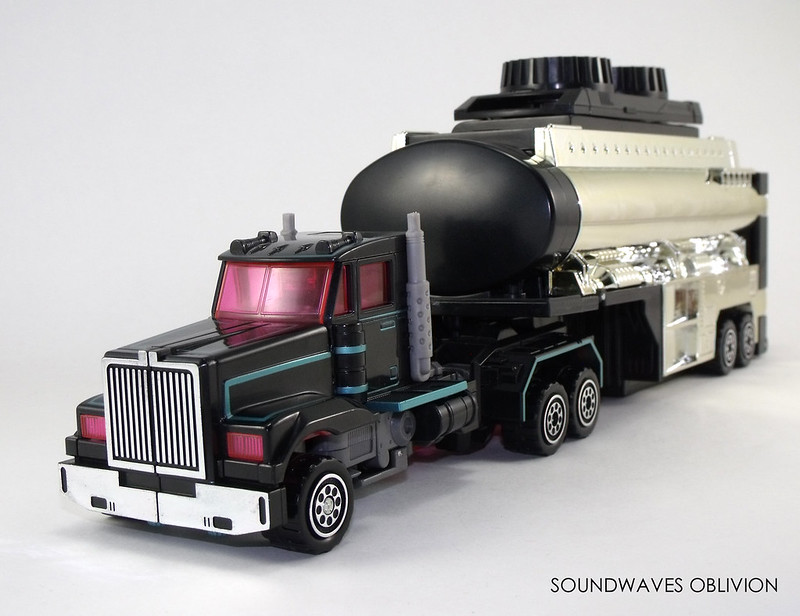 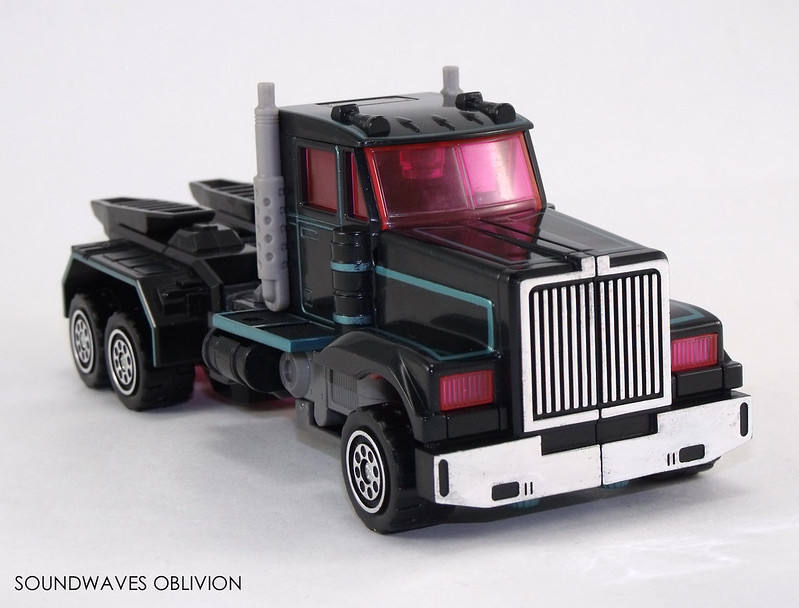 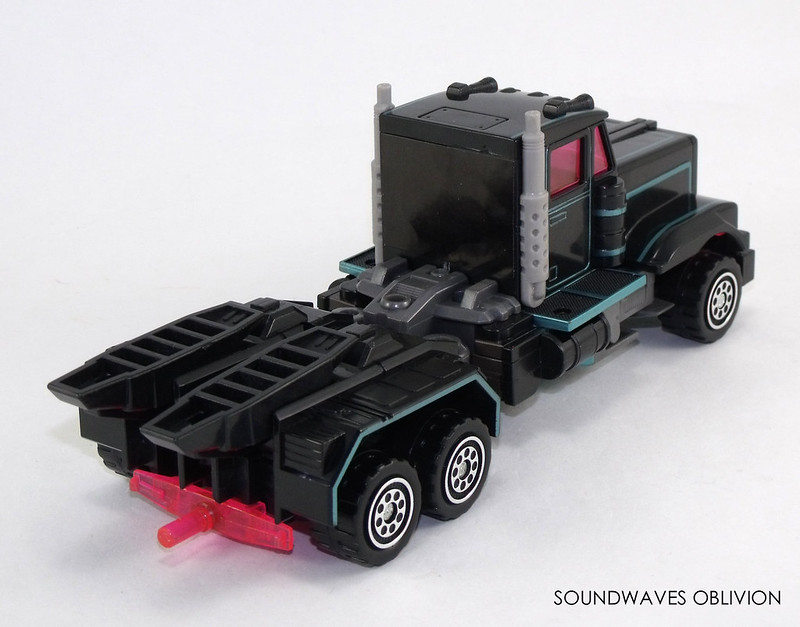 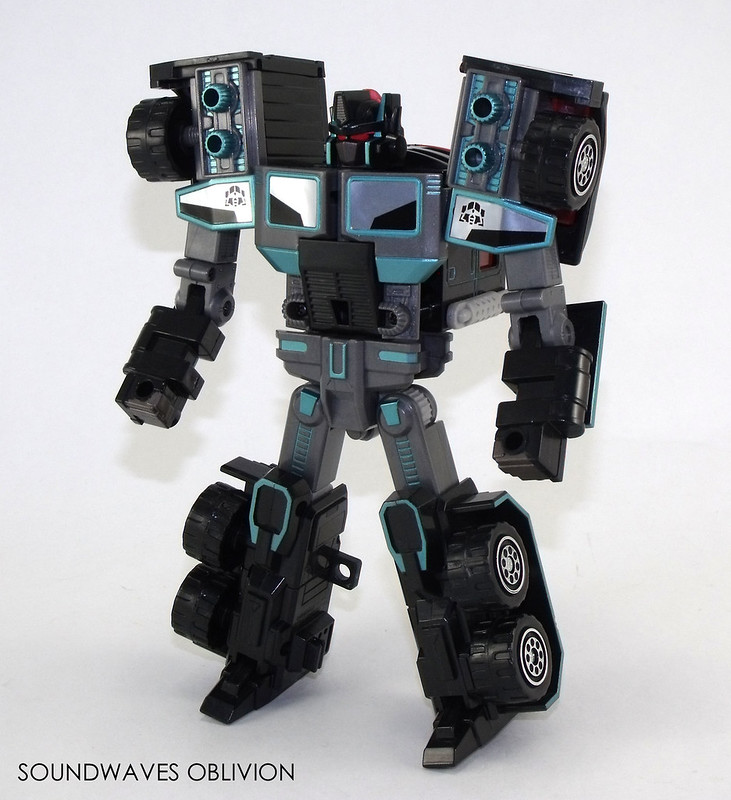 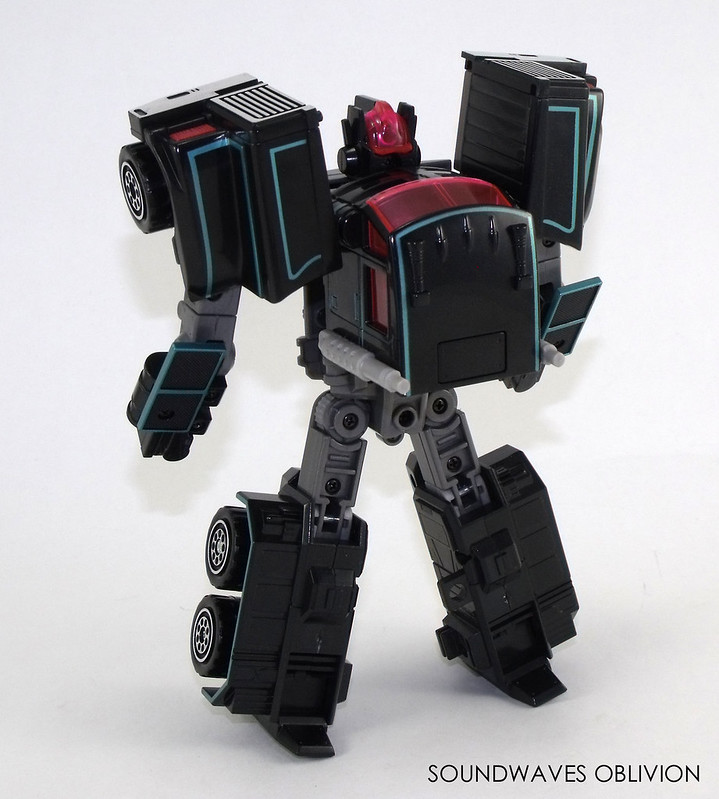 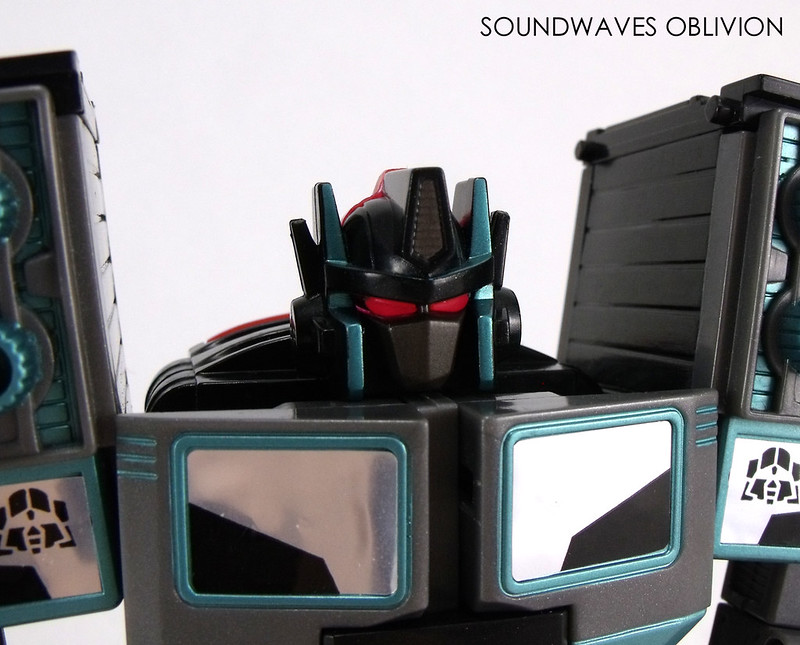 The stand out Destronger was Black Convoy, a black, teal & grey repaint of the 1995 Generation 2 Battle Convoy / Laser Optimus Prime. The colour scheme was inspired from Takaras Black Lio Convoy figure which was the first black repaint of Convoy. 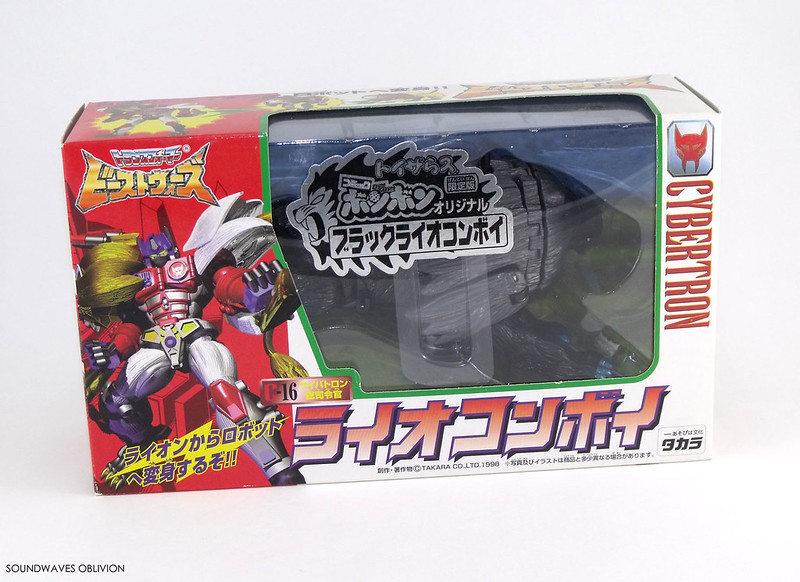 The mould is an example of the improvements in articulation for the Transformer figures in Generation 2 which still holds up by today's standards and has since been re-released multiple times, the last being the 2015 Platinum Edition Year of the Goat Optimus Prime with a questionable colour scheme. 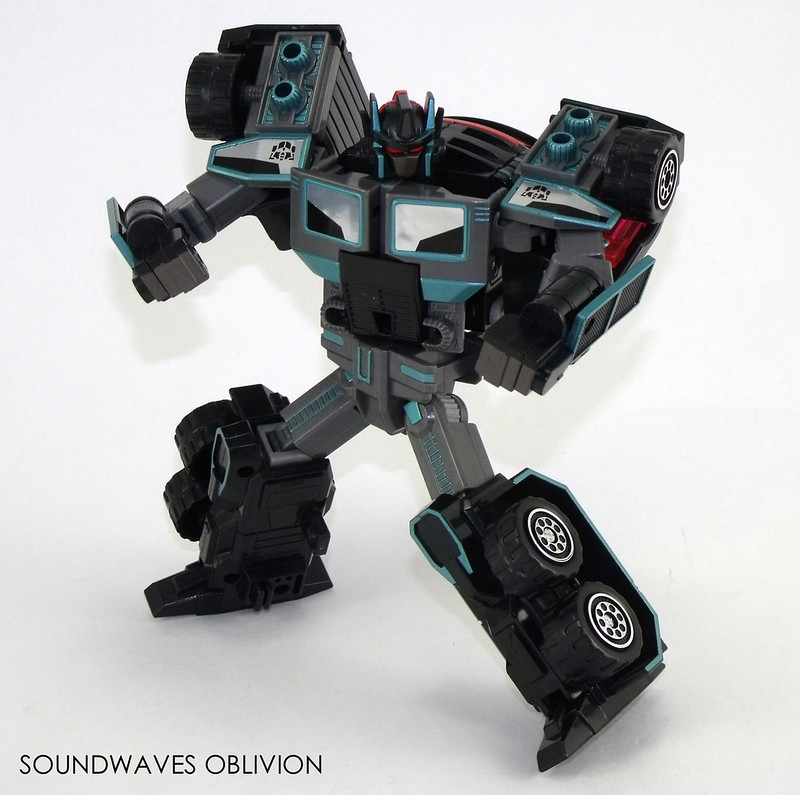 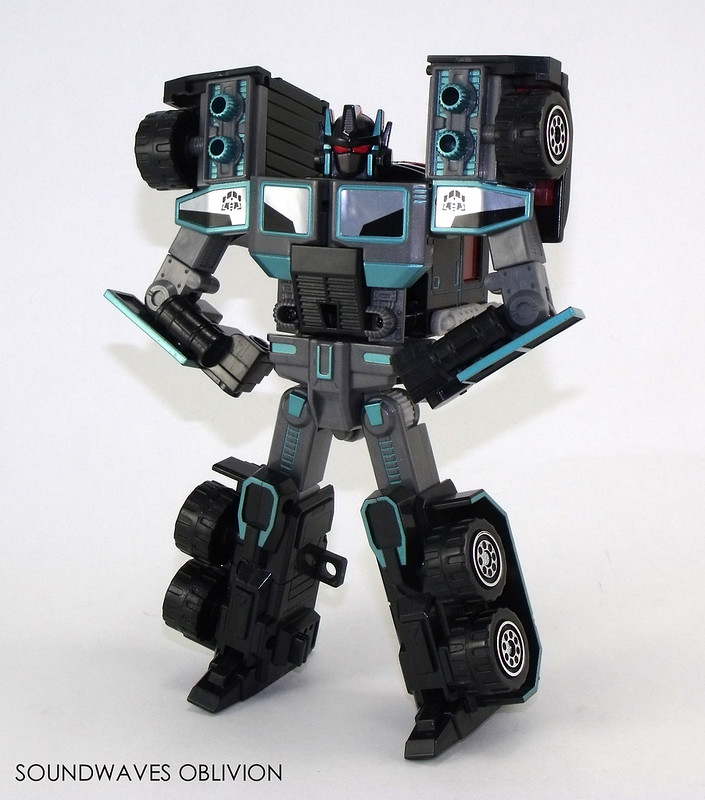 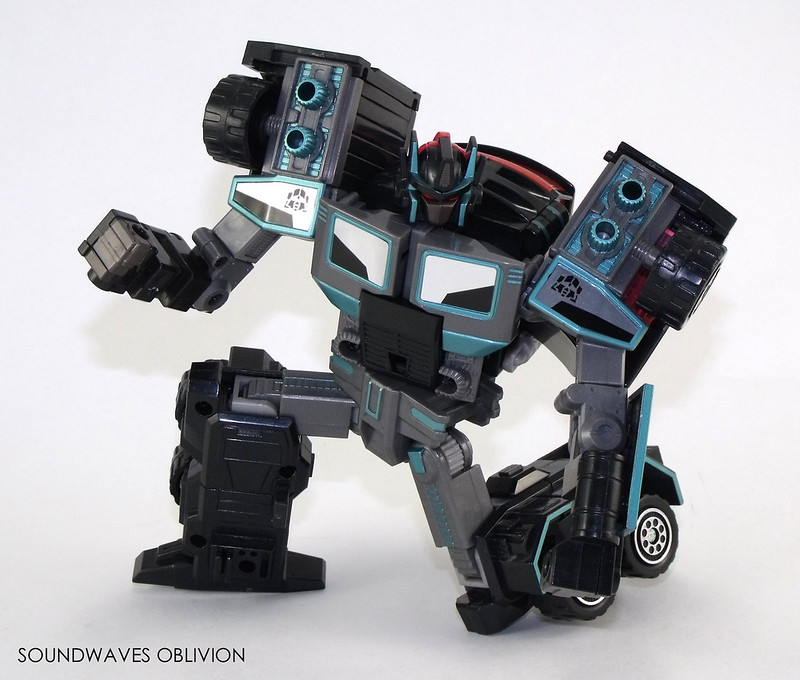 Black Convoy has to be the best version of this mould, the only negative (or not depending on how you view it) is the electronics were removed for the Car Robots release. The button on the cab roof would light up the robots fist, which in turn would light up the translucent plastic sword when holding it. 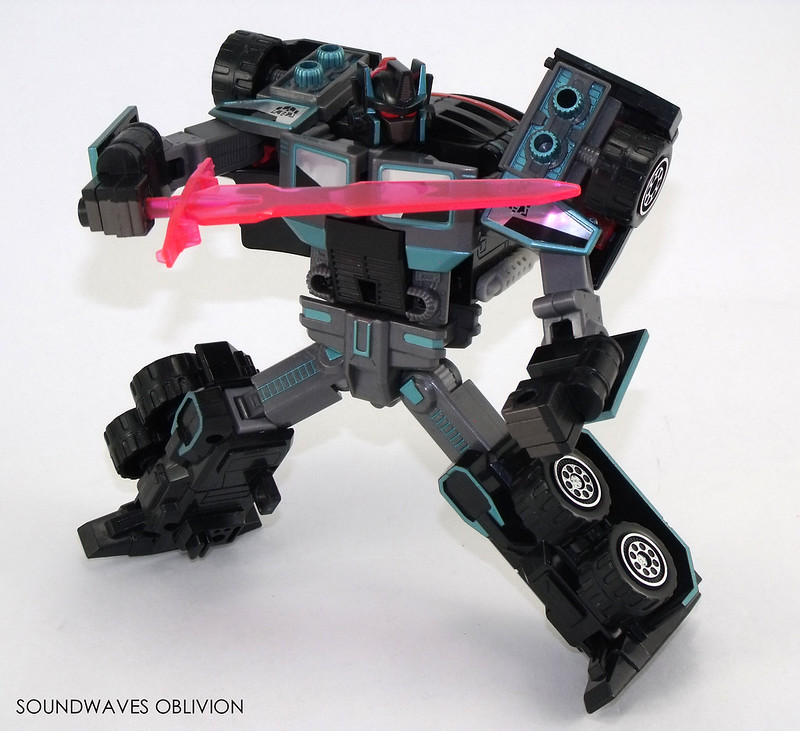 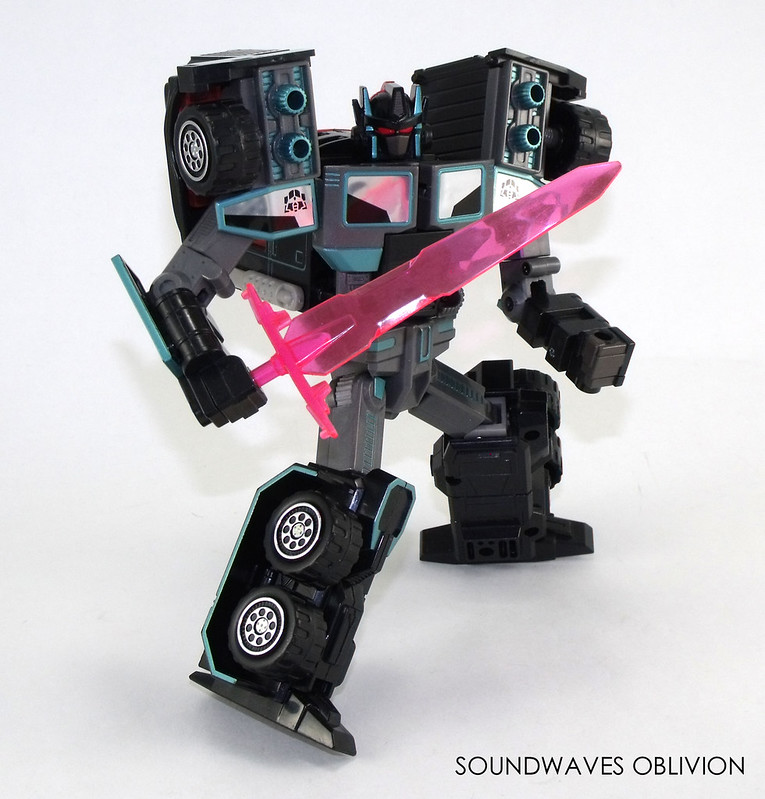 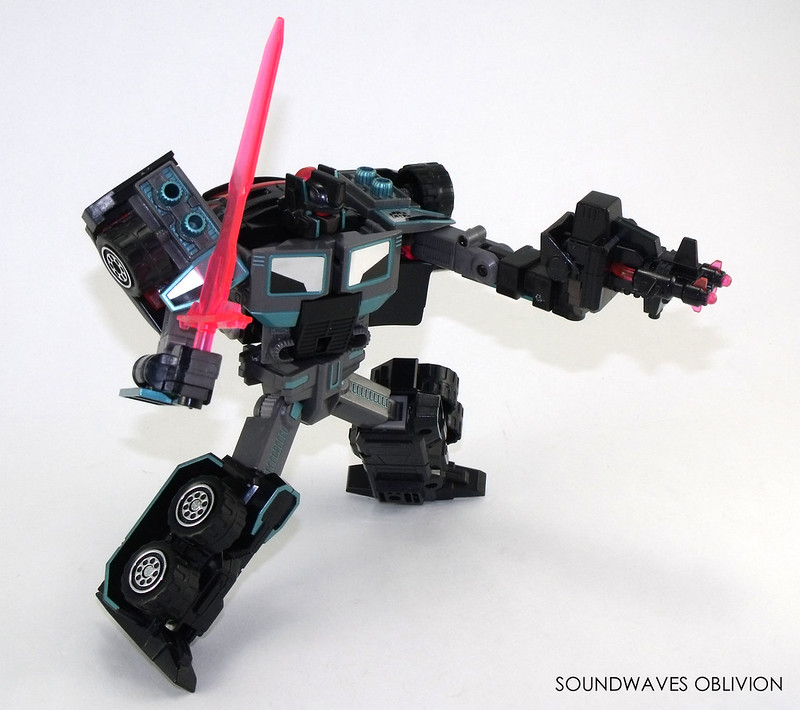 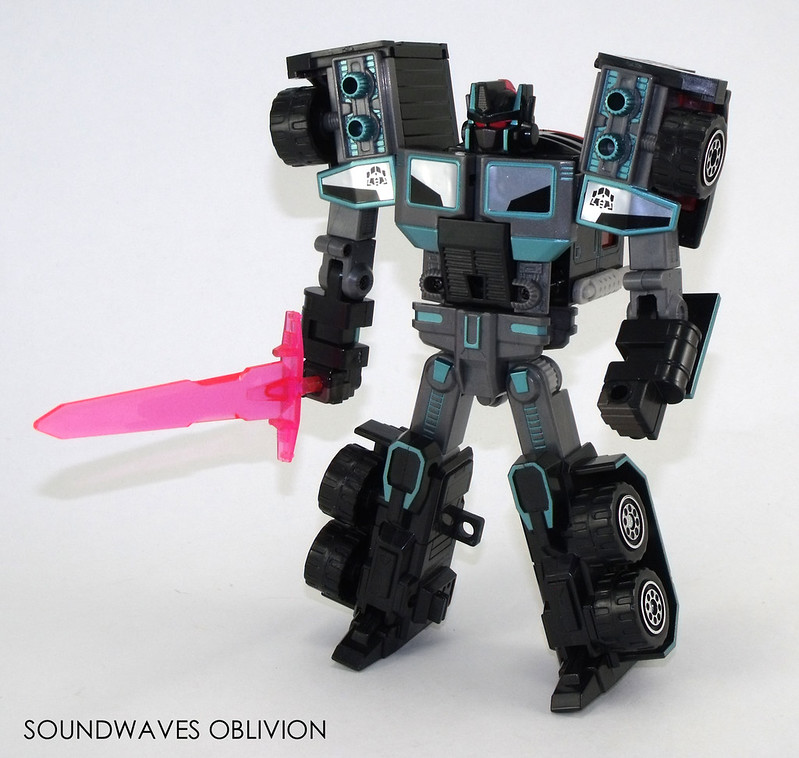 The following year in 2001 Hasbro would release their own version of Car Robots entitled "Robots in Disguise"; Black Convoy was renamed Scourge and was released as a Toys R Us exclusive in 2002. This release would feature Decepticon logos instead of the Combatron insignia (upside down Generation 2 Autobot insignia). The sword was remoulded to blunt the point and was deeper red in colour, the 5 firing discs were blanked removing the Combatron insignia. The rear of the trailer reads "Scourge D-012" instead of "Black Convoy D-012". The South Korean Sonokong release of Black Convoy was Hasbro's release with Takara's stickers. 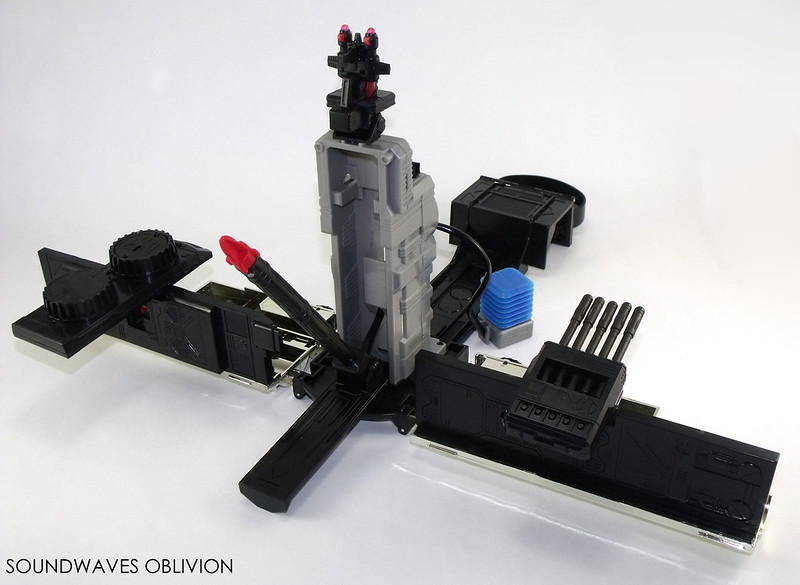 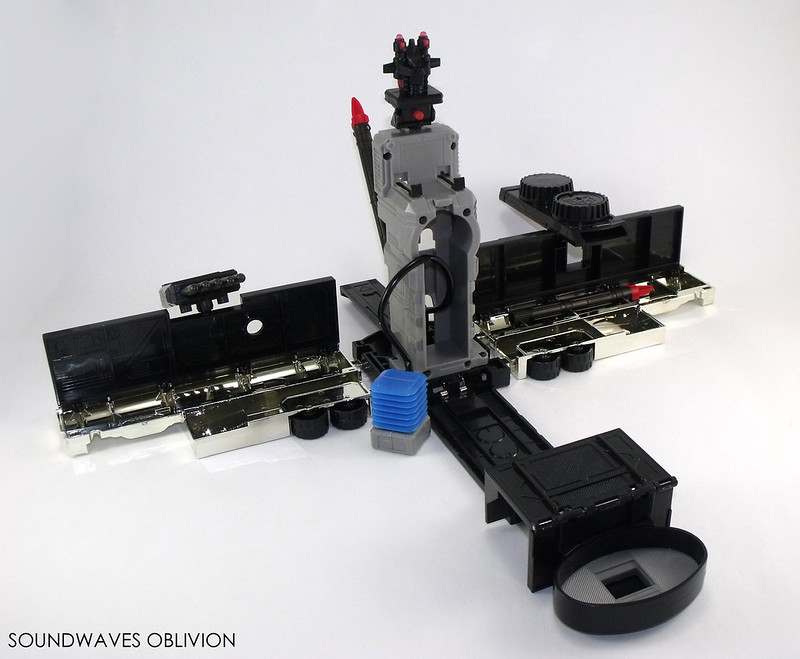 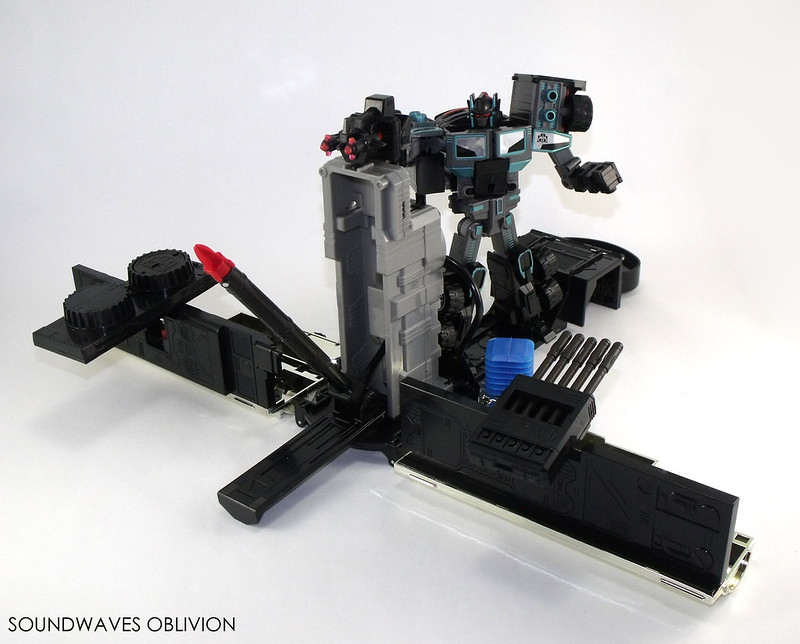 Overall this is one of the best Black Convoys released so far, the 2 recent Transformers Legends versions are good figures but neither top the original. 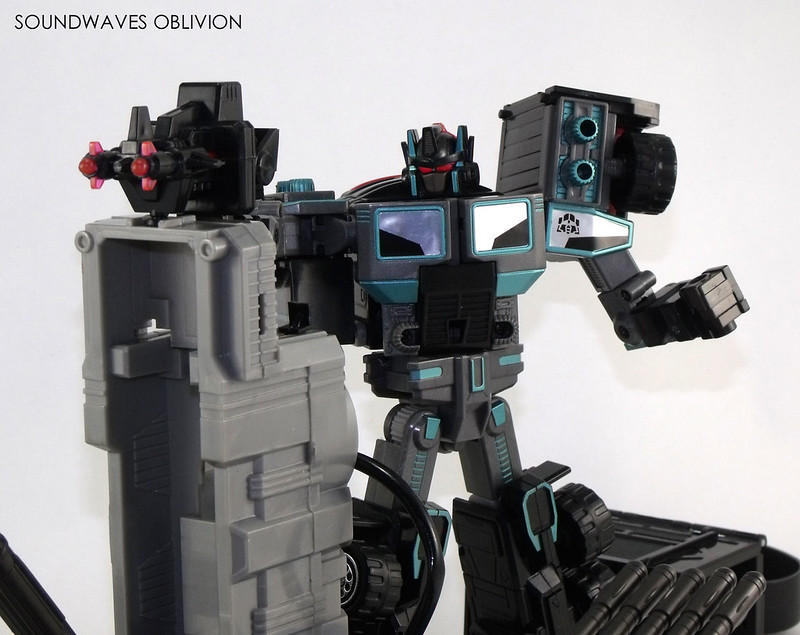 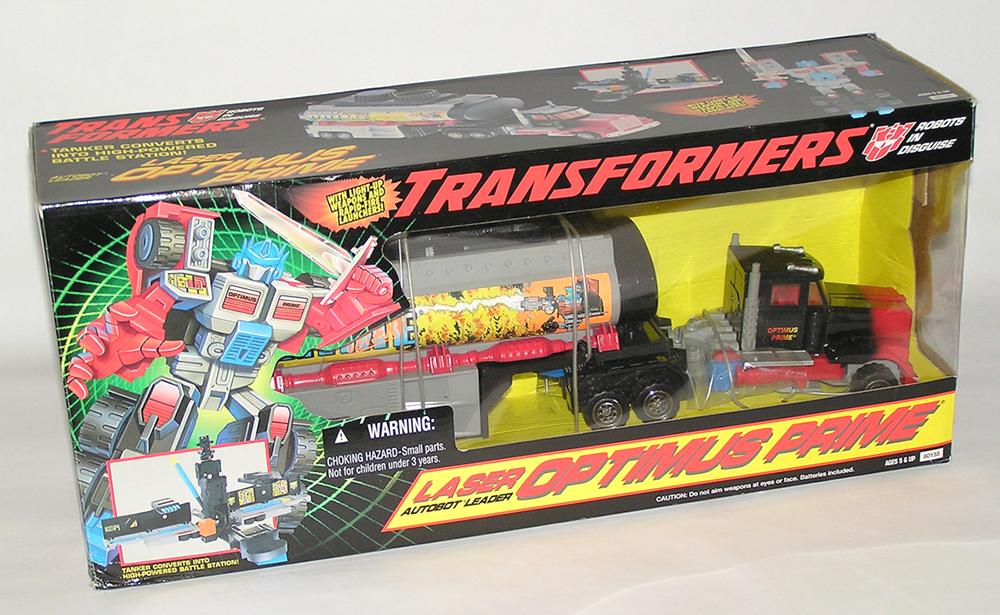 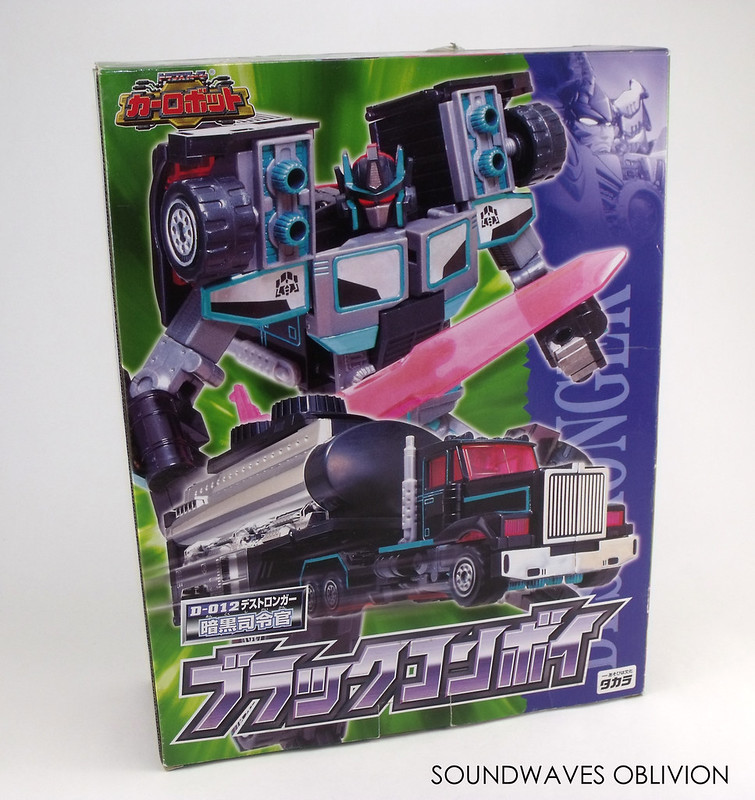 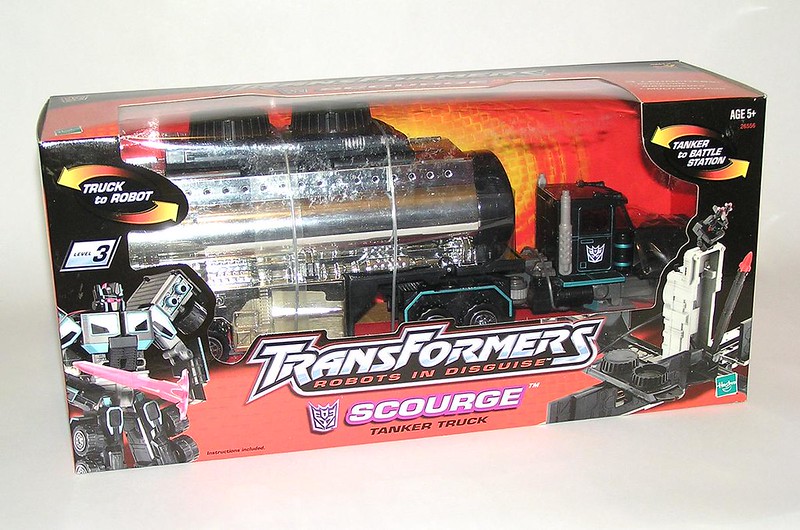 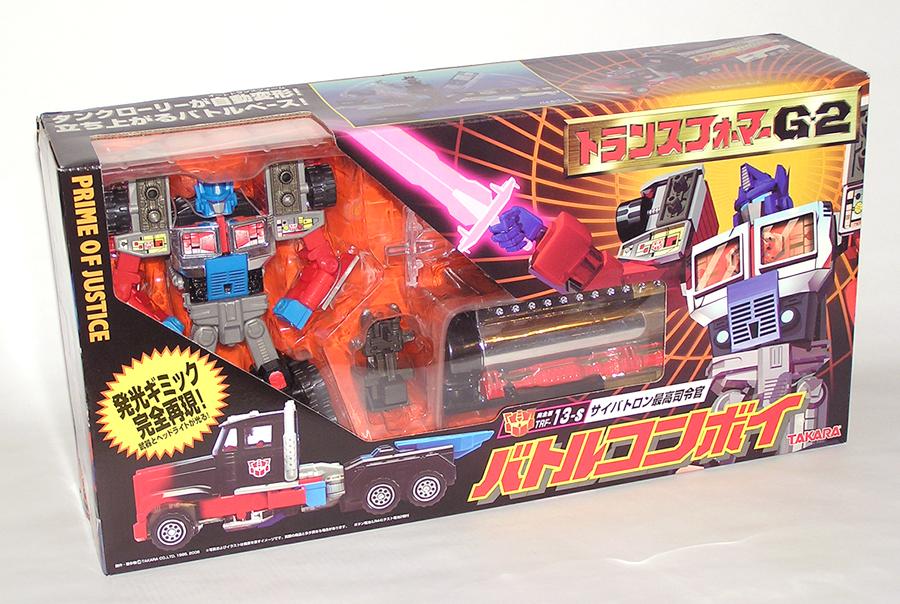 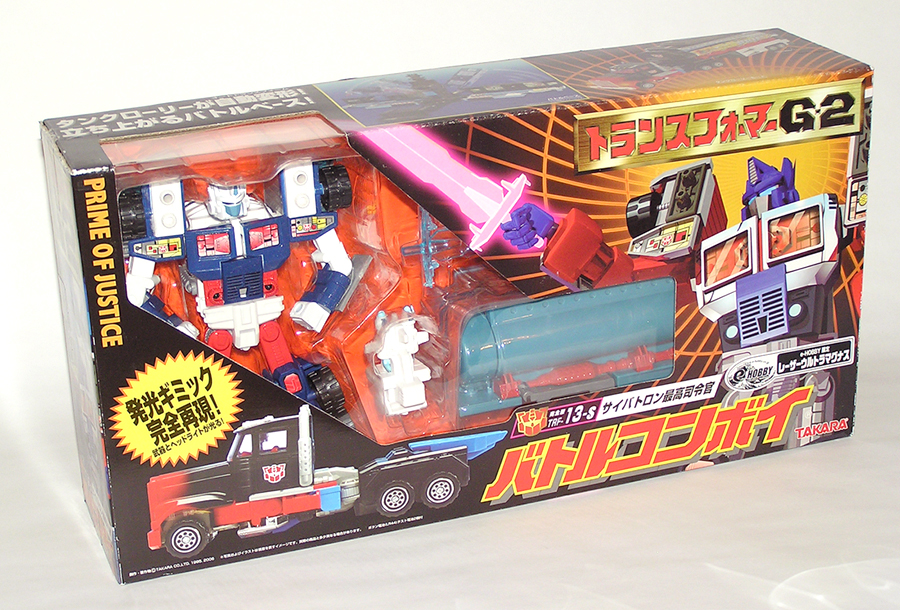