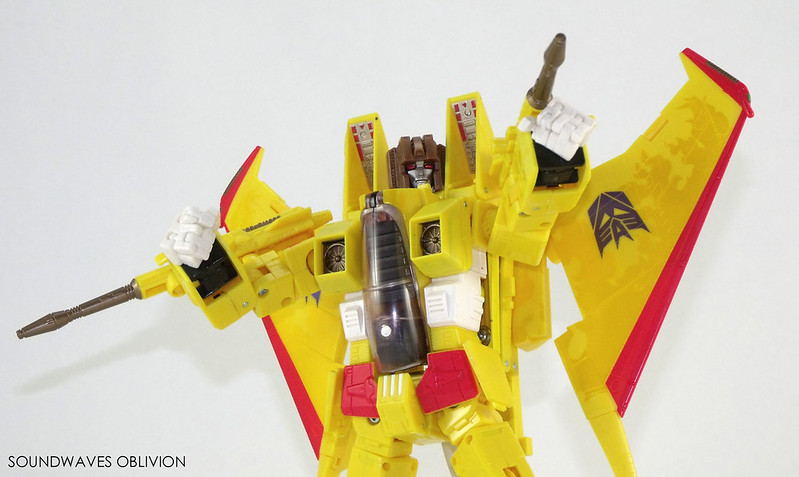 Fly too close to the sun and you'll get burned. Get too close to Sunstorm, and you'll be dissolved into a puddle of liquid scrap. The maniacal warrior's radiation-emitting armor has the power to melt the metal of nearby bots, disabling their circuits and scrambling their brain module in the process. Some might say this is a quirk of science - a glitch that triggered a reaction when Sunstorm was forged. Sunstorm himself would say it's something more: a gift from higher power that he must use on those who deserve to feel his wrath. That might be a little much, but do you really want to argue with him? 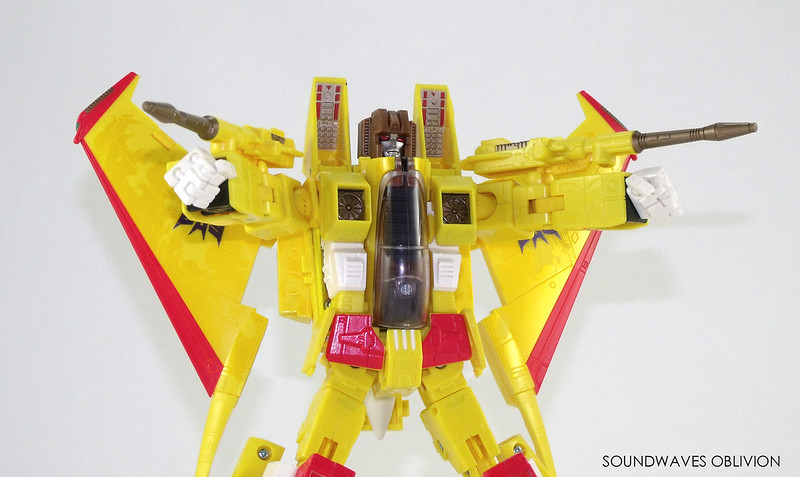 Sunstorm has had quite a journey from once a once unnamed and fleeting appearance in the original pilot episode in 1984 and then to having an official release in 2003 as an e-Hobby exclusive repaint of the Starscream reissue. After having several releases since and comic appearances, Sunstorm was released as a Masterpiece figure in 2012, a straight repaint of MP-11 Starscream, including all the accessories. 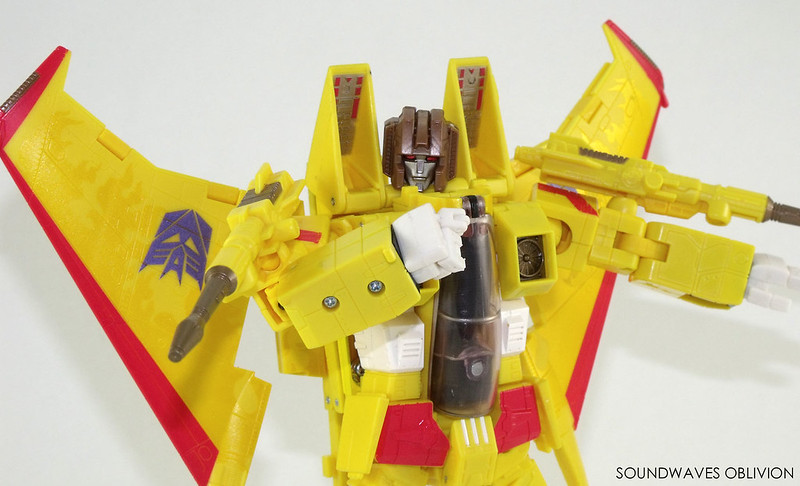 Sunstorm at the time was an odd addition to the Masterpiece line as up to this point only the original mainstream cast of Transformers were being released, additionally Sunstorm was unlike the later Diaclone releases in the Masterpiece line (Exhaust, Loudpedal, Bluestreak etc). 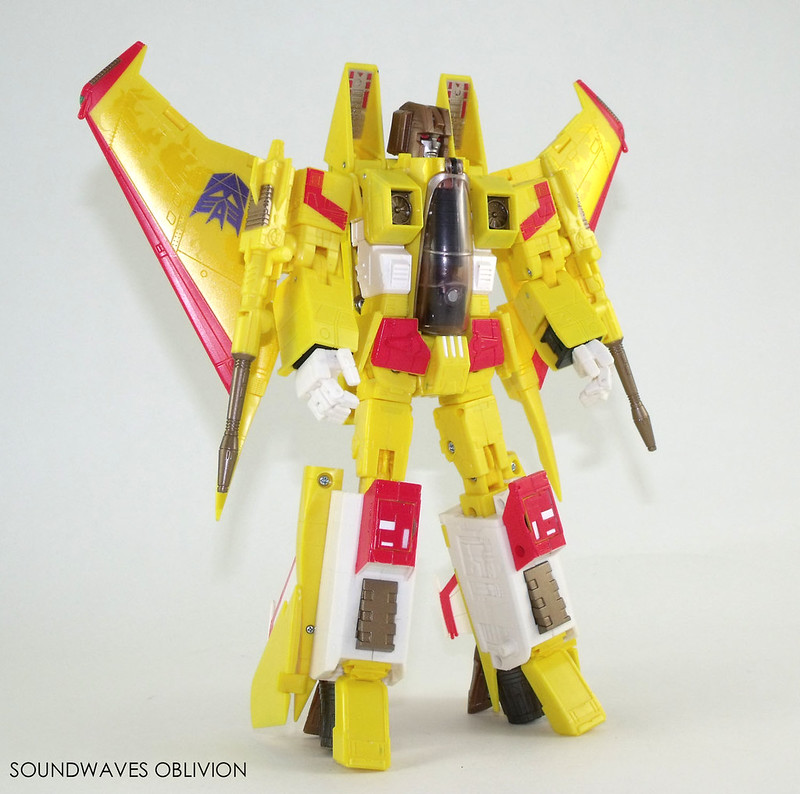 Sunstorm however was only released as an exclusive limited to Amazon in Japan, as well as an Asian exclusive which came with a collectors coin. Unfortunately I missed out on this figure after deciding that after just paying for MP-11 Starscream, I couldn't justify the same figure again albeit in different colours. 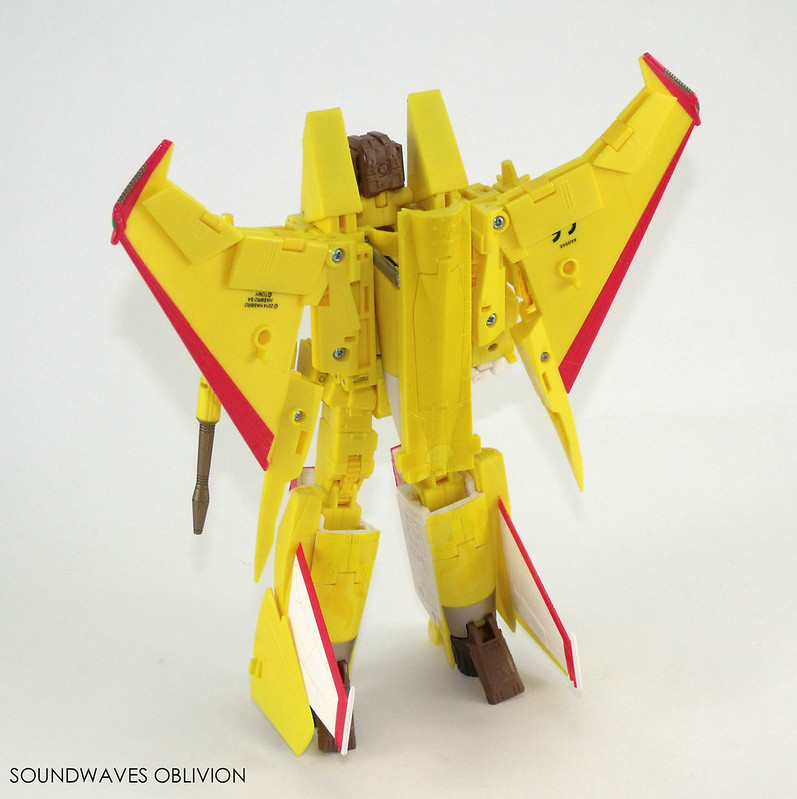 When Hasbro announced they were releasing Sunstorm in 2014 I was interested and more so when it was put on clearance. I much prefer the colours on Takaras version, however Hasbros version is not too bad though I dislike the brown used for head, shins and null rays. What I do prefer on Hasbros figure is the flame detailing which is more prominent in jet mode. Interestingly the box art depicts the original Seeker mould. 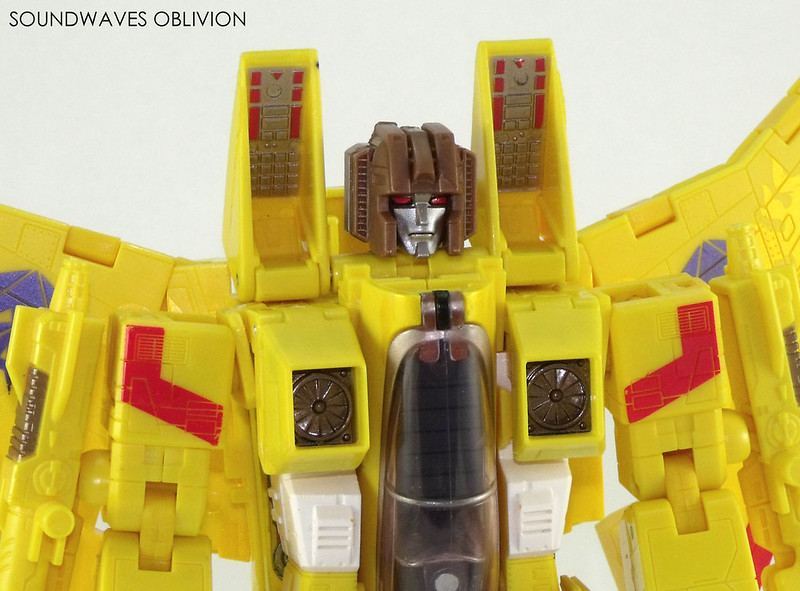 Accessory wise Sunstorm comes with a clip for the Megatron gun which came with MP-1 Convoy, the usual stand (which I could not get my figure to clip onto), the double missiles and a Dr Arkeville pilot cast in yellow plastic with no painted details. 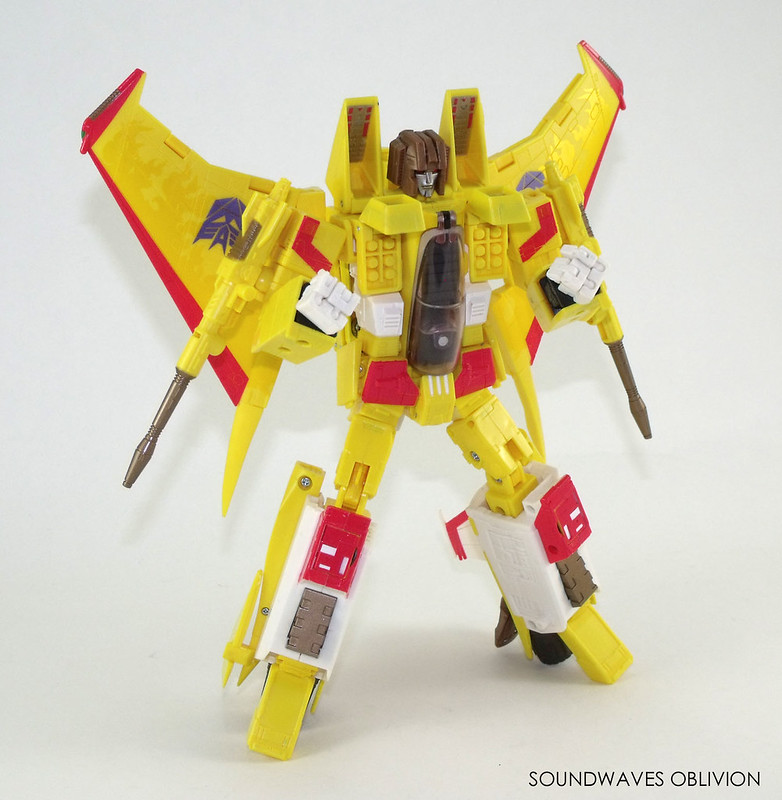 Despite the odd choice of colours (in my opinion) Sunstorm is a decent figure and one to pick up if you are a fan of the character, though I would not recommend paying full price for it. 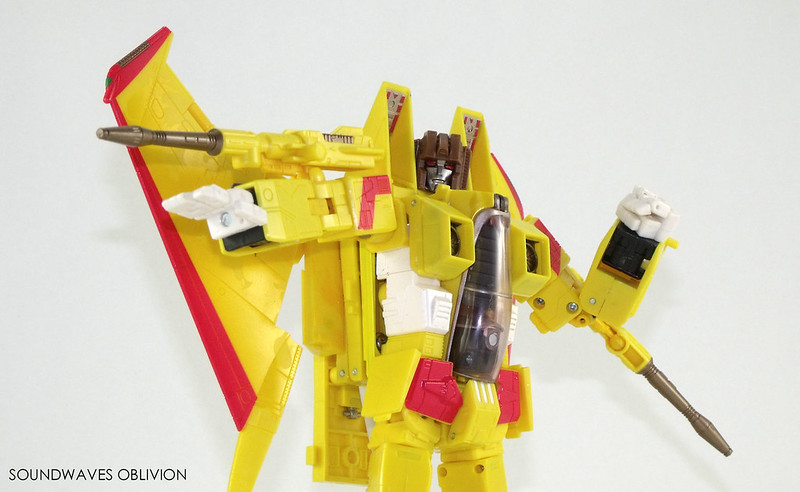 Although this is not Takara Tomys version, below are Translations from MP-11S bio card and instruction booklet:-

MP-11S Sunstorm (Translated from the Collectors Card)
Function: Aerospace Soldier
Motto: “You must soar the heights to reach the heavens.”
Profile:
Sunstorm is a powerful soldier, uses demonic-like forces to manipulate the sun. He has no interest in the supremacy of the Destrons but saw from a distance Starscream’s magnificent attire during his coronation which sparked his desire for transcendence. He has imitated the attire of champions as an expression of his vanity as well as a practical function with it being able to enhance his control of fusion power.
STR:6; INT:6; SPD:9; END:7; RNK:5; CRG:8; FBL:9; SKL:7 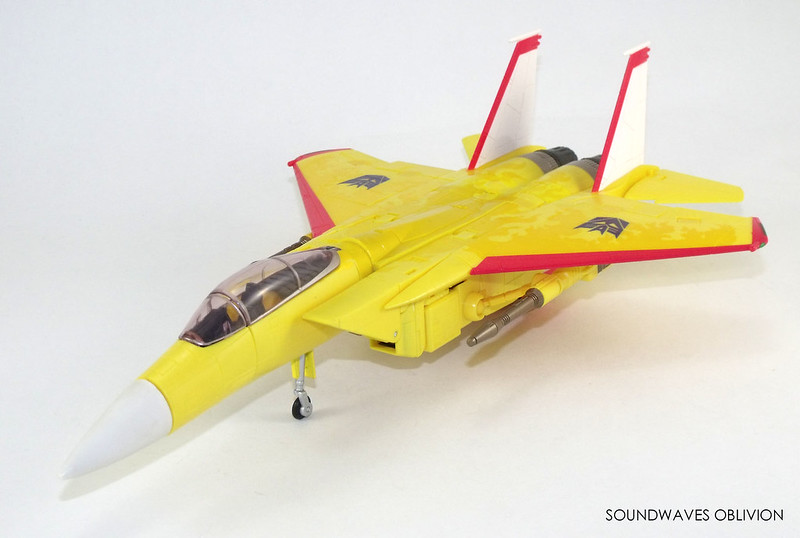 Destron / Sunstorm (Translated from the Instruction Booklet)
Function: Aerospace Warrior
Motto: “I will soar the heights to reach the heavens.”
Profile
Created with a built-in fusion reactor running at higher than original efficiency, he can use it as a weapon to generate intense light and heat or other powerful electromagnetic waves. These energy emissions are constantly radiating from his body, inducing negative effects in his nearby team-mates' internal systems, so unless he provides rigorously secure shielding, he is only rarely included in unit activities. His top atmospheric speed is 2400 km/h, while he can reach 16000 km/h in outer space. Sunstorm is secretly convinced he is a supernatural being, and his frequent flashes of bizarre speech and behaviour tend to keep his comrades at an excessive distance.
Weapons: Gamma-Ray Laser Cannons, Burst Missile

Description
In the first episode of the TV animated series “The Road to Earth” there is a scene where numerous Destron soldiers attack Wheeljack. Sunstorm is based on the yellow bodied aerial soldier and only has a fleeting appearance. He was only one of a few nameless characters adorning a corner of the screen; however after 19 years he is now a true character sporting a name and a background. As one of e-Hobbys redesigns of the existing 2003 products, Starscream was recoloured and released in a set with Road Hauler, a Cybertron warrior based on Hauler who also appeared in the first episode. The name “Sunstorm” follows the naming pattern of the other Aerial Warriors such as “Starscream” and “Skywarp”, whose names are determined by combining words relating to the “sky” with a “serious circumstance”. Other names under consideration were “Flareburst” and “Flarestorm”, both representing solar activity reflected in his profile. Although at the time his character was not fully explained, this project was sufficiently recognised in Japan and gained momentum abroad where a PVC version of the e-Hobby Sunstorm was announced and given away to visitors at the 2003 Official Transformers Convention the “OTFCC” in North America. From this moment, Sunstorms name, character and colour scheme was positively accepted in the North America. His history is outlined below.

2004:
He was the major villain in the first half of the regular Dreamwave Comics. e-Hobby added their own interpretation to the figure whose style has been subsequently repeated with later releases. In the “Transformers Universe” line, Micron Legend Thrust was recoloured and sold as a store exclusive, only available in North America. This version of Sunstorm also appeared at the OTFCC event where he was depicted in a live voice actor drama.
2005:
Palisades Inc released a statue limited to 300 pieces worldwide.
2006:
In “Transformers: Cybertron” (Galaxy Force), an EZ Collection version was released. As well as this version Sunstorm was also released as an evil Micron, part of the Sky Terror Team who also appeared in a fan club comic.
2007:
In the die-cast toy line “Titanium Series”, War Within Thundercracker was repainted as Sunstorm, this character was based on the Dreamwave version.
2008:
In “Transformers: Animated”, Sunstorm was a clone of Starscream and this was his first appearance on television in 24 years. Due to the demand from the Asian market a reissue of e-Hobbys original version was released and sold with an additional comic by Eiji Yoshioka.
2009:
In the “Transformers: Revenge of The Fallen” video game, Sunstorm was made available as a DLC (download offer) character.
2010:
When “Animated” was launched in Japan. An EZ Collection version of Sunstorm was available as a campaign exclusive. A Diamond Select Toys inc mini bust was released, limited to 600 pieces worldwide. 2012 then led to the Masterpiece version. It is unparalleled that a once unknown soldier has left such a mark on the series. 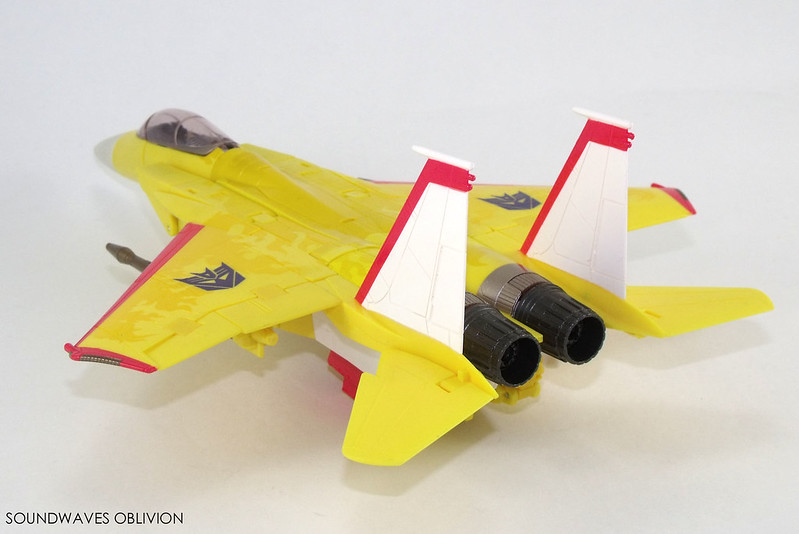 Weapon: Burst Missile (Translated from the Instruction Booklet)
Burst Missiles are live ammunition built into Sunstorms body; they explode when close to their target, ideal for wide range attacks, destroying everything in the vicinity. Although high-powered they reduce the influence of Sunstorms own energy; they have a primitive guidance system and are often failing with a danger of inducing explosions. 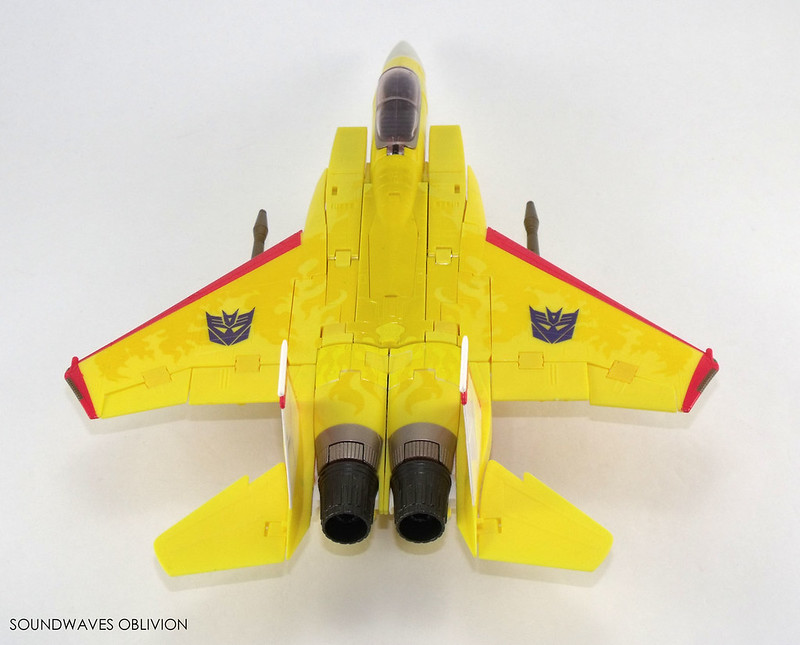 Equipment: Ostentation (Translated from the Instruction Booklet)
When the Destrons appoint a New Emperor of Destruction, they hold a special succession ceremony. The stage is set at the “Deston Hall of Heroes”; with statues of past Destron Leaders lined up, this is an important sanctuary for them. (※In the initial draft of the “Transformers: The Movie” screenplay, when a Transformer dies, their soul called the “Life Spark” separates from their body. When Megatron is on the brink of death after his battle with Convoy, there is a scene where Megatron appeals to his subordinates; ”Place my dying Life Spark in the Hall of Heroes”.) It is here where Starscream has his coronation in accordance to tradition, and at this climactic moment of his life, Galvatron suddenly appears and obliterates him. Although Sunstorm was indifferent to the ongoing power struggle, he was fascinated by the ceremonial robes worn by Starscream and came to think that they would be worthy for his moment of glory. Sunstorm soon completed his imitation robes, satisfying his twisted self-confidence. In order that his new robes are not destroyed by his energy, he has incorporated a high-powered rectifier circuit. Together with his original defensive capabilities, he can now focus the excess energy emitted from his body and use this greatly enhanced electromagnetic force as a weapon. 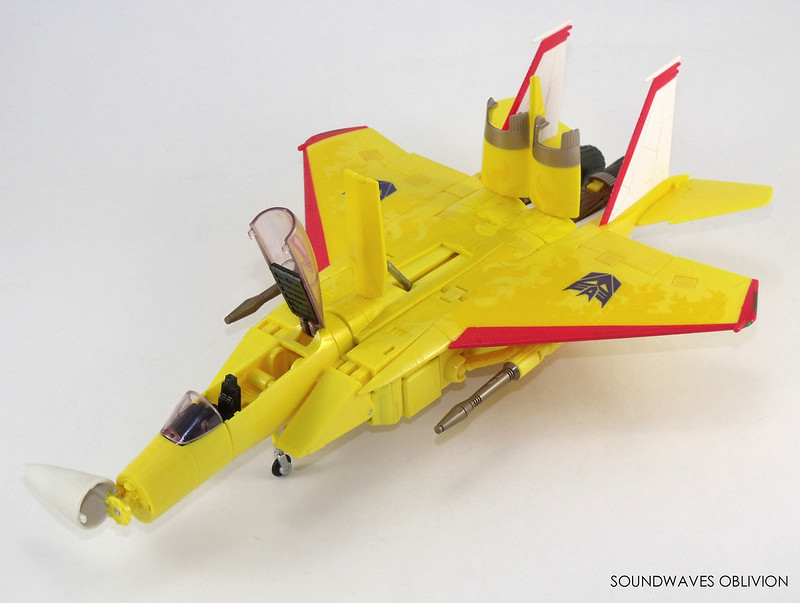 Function: Configuration (Translated from the Instruction Booklet)
In various situations Transformers can change their form by “reformatting” their motif. Sunstorms appearance in the animated series was from 4 million years ago and his transformation was the same as the other Aerial Warriors and had the shape of a machine called a Tetrajet. As he is currently on Earth, he has reformatted himself into a jet aircraft. Incidentally, in episode 6 of the cartoon there was an appearance of the flying squad the “Rainmakers” who transformed into Tetrajets, though one of these soldiers were similar in appearance to Sunstorm, they are separate characters. 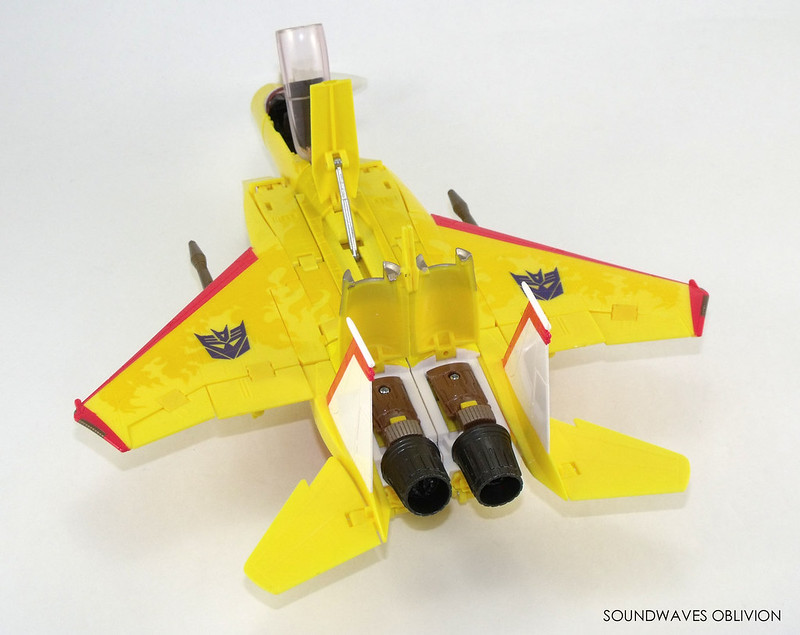 History: Untold Story (Translated from the Instruction Booklet)
Sunstorms fully fledged appearance in mainstream media was in 2004 in an American comic book series published by Dreamwave. The title was the “Transformers” which was an ongoing series, a Number 1 seller though not released in Japan. Sunstorm was a central figure early in the series who goes on a variety of rampages. A super-soldier created by Shockwave where a clone of Starscream was fitted with a powerful fusion energy reactor; when downloading data from Vector Sigma there was so much information that some of the compressed data filled the clones body and he awoke as Sunstorm. He came to Earth with a fanatical character and a mysterious purpose; he alone defeated the Autobot army and tries to solve the mystery of a seal left on the ocean floor by ancient Transformers. During a fierce battle with Jetfire to prevent the release of this ancient power, his fusion reactors became unstable and he ended up exploding in space. With the demise of Dreamwave, Sunstorms story was unfinished but according to the intended storyline, Sunstorms behaviour would have been explained that he was possessed by one of the original 13 Transformers, “The Fallen”. 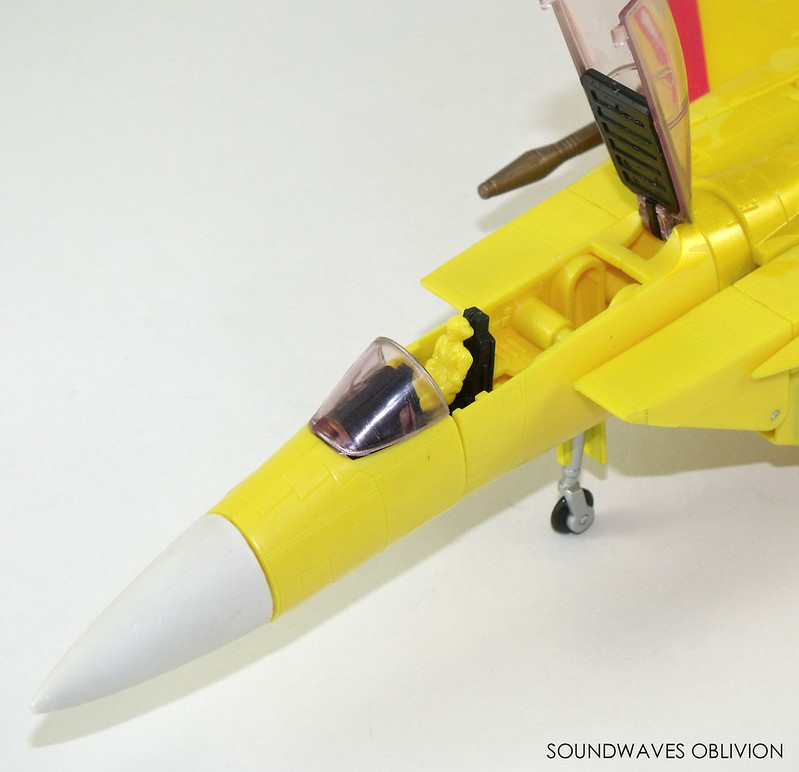 Function: Holo-Pilot (Translated from the Instruction Booklet)
Many Transformers with vehicle modes have a function to place a fake pilot behind the controls. They either use a mechanical device to bring out a dummy or they project a hologram which makes the disguise more realistic. The virtual pilot installed within Sunstorm is made from a holographic pseudo substance called Holo Matter. This image can touch physical objects and Sunstorm often uses this as an avatar which he operates remotely. 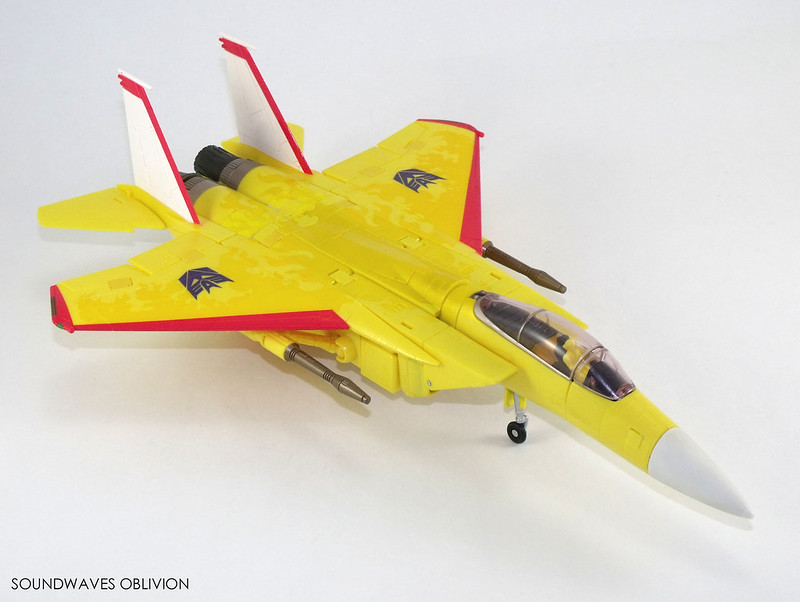 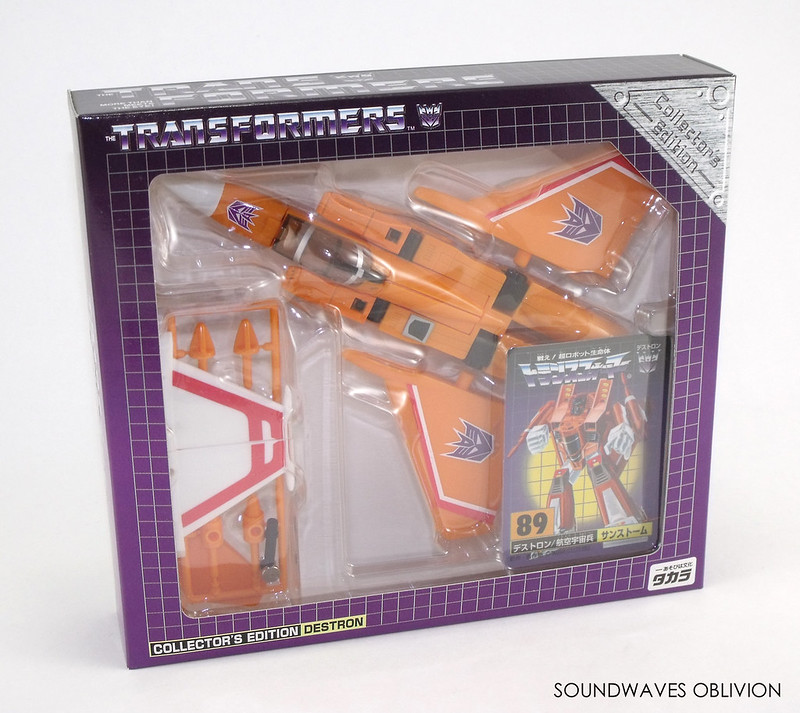 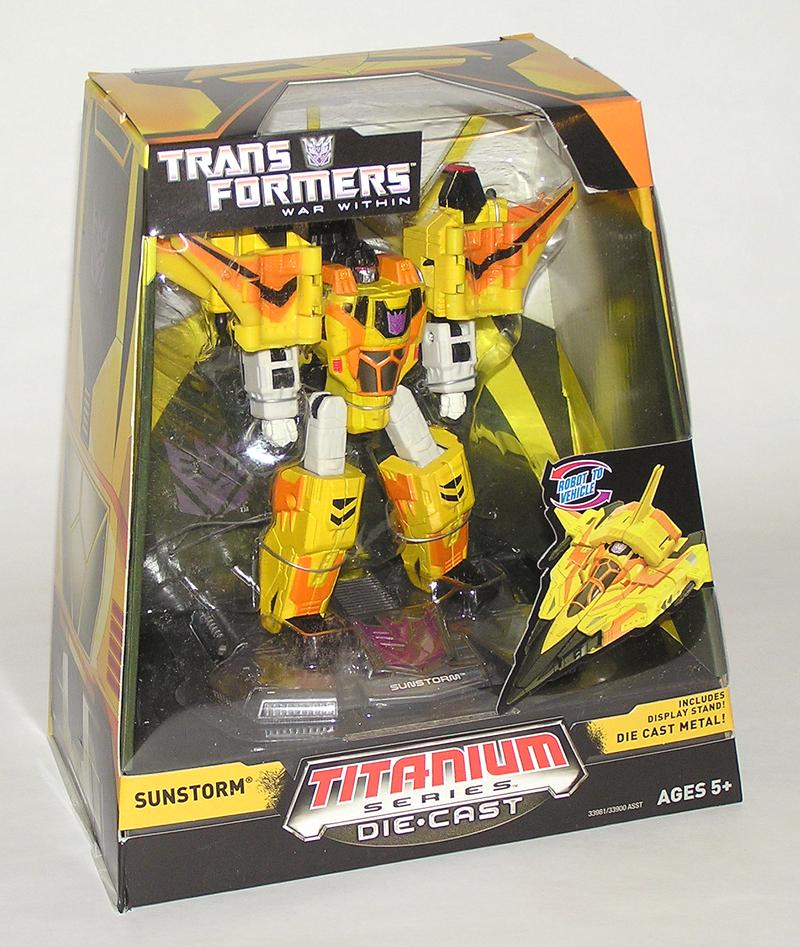 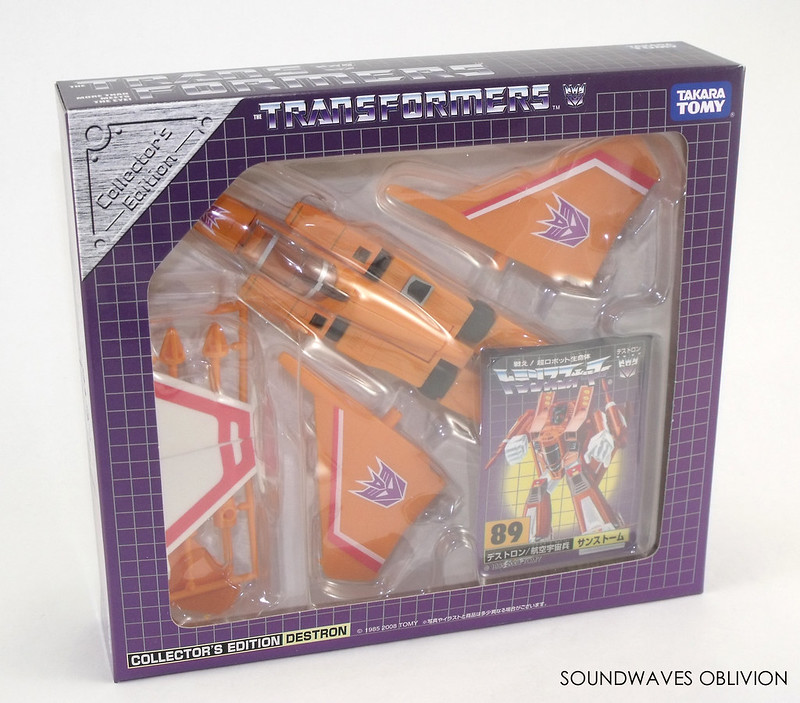 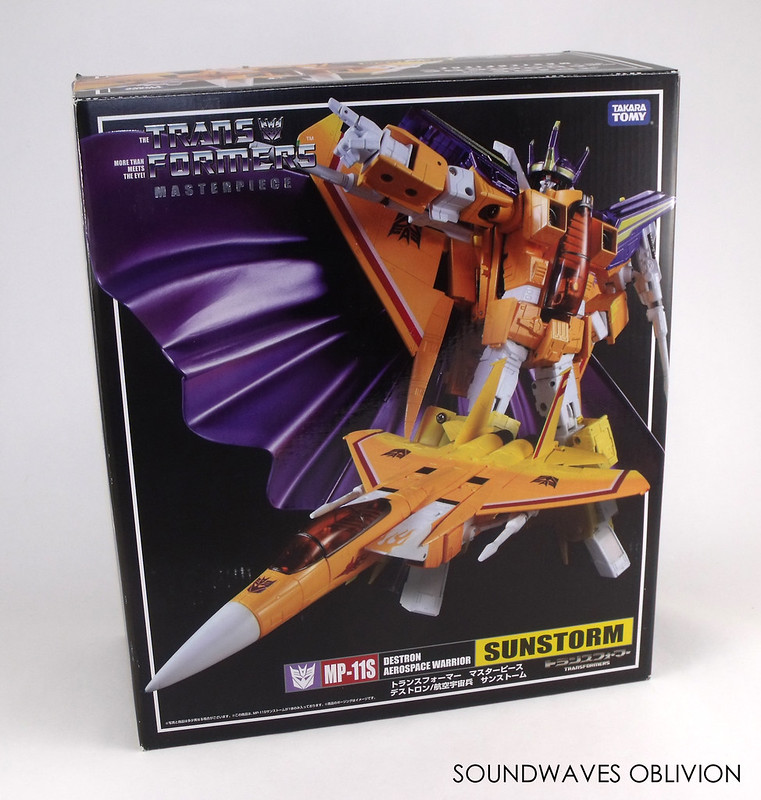 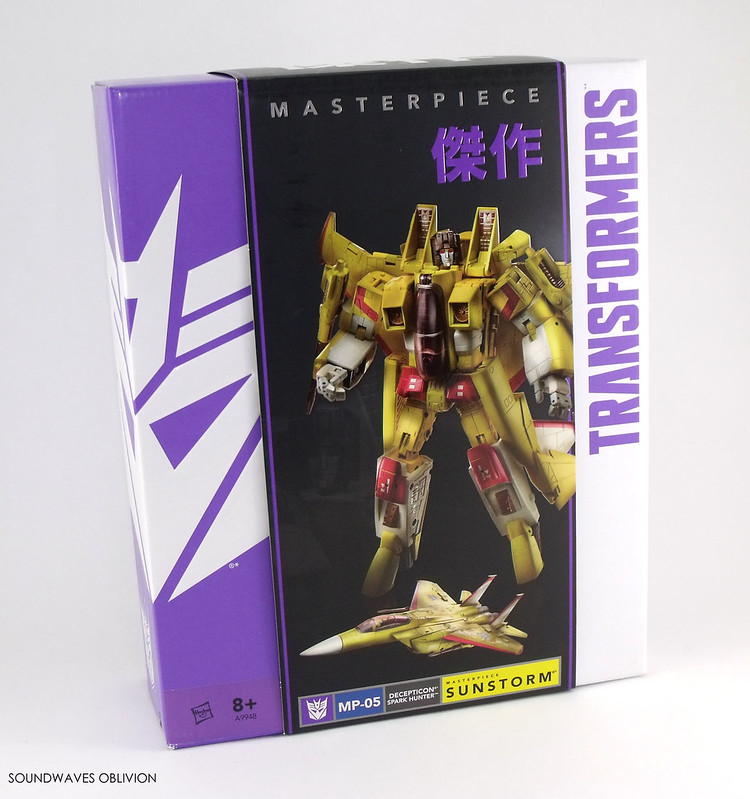