The Optimus Prime & Gaia Unicron box set was a re-release of the 2012 Takara Tomy Arms Micron AM-01 Optimus Prime and AM-19 Gaia Unicron. Released on the 28th December 2012 in selected Asian countries it was to commemorate the Chinese New Year (Year of the Snake) which started on the 10th February 2013.


Optimus Prime and Gaia Unicron are packaged in robot mode in a glossy premium styled box with a front flat to lift and view the figures. They both come with the Arms Microns (O.P and Bogu) their original releases came with and are pre-assembled in the box.

The additional paint detailing certainly goes a long way, especially with Optimus Prime. Both Hasbro and Takara Tomys original release came with translucent blue forearms which didn't quite work for me. Hasbros version came with a generic light up gun and a sword which were not present in the show.
I don't think this figure is as good as the initial "First Edition" release compared side by side with its transformation simplified and a robot mode which is not as show accurate. Ignoring the First Edition, this is still a decent figure with a satisfying transformation and good articulation. The premium metallic paint work on the Year of the Snake release certainly shows there was a good figure there after all. 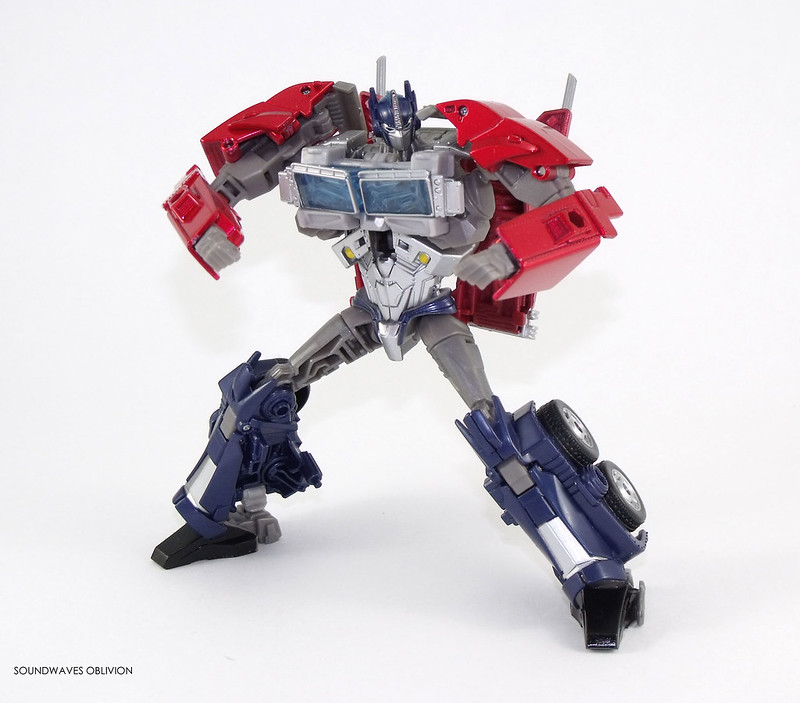 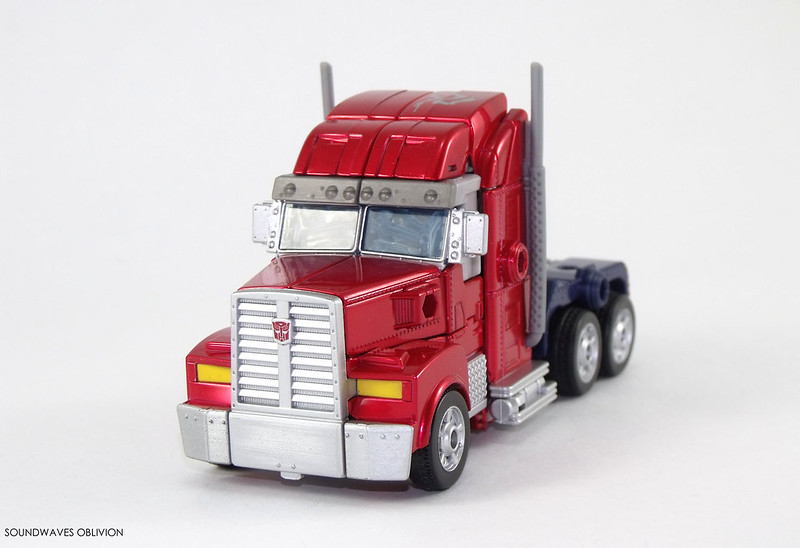 I bought this set purely for Optimus Prime, the Unicron figure was just a bonus figure. I have the original AM-19 Gaia Unicron and I didn't realise just how different the colours were until I had both of them in front of me. The Year of the Snake version does have a more premium look, despite this I find it has too much chrome and I prefer the original AM-19 figure.


Unicron has a good show accurate robot mode and I like the changeable arms however I find the transformation a mess when pieces keep popping off, from the shoulders to the chest and head assembly. The Year of the Snake version is more of a hassle to transform than the original release - you have to force pieces in place and things fall off a lot more than the AM-19 version (but maybe that's just mine?). The alternate mode as a tank is just awful, its only redeeming feature is that if you stand it upright it is a large Unicron head. 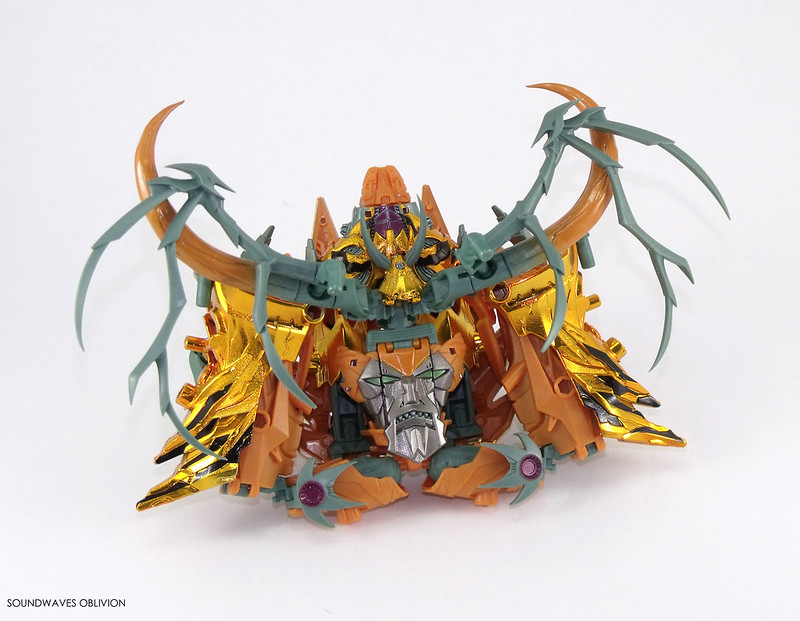 The main reason Unicron falls apart easily is he becomes armour for both Optimus Prime and Megatron. It sounds a good idea in theory but in practise, although it looks quite regal, it doesn't quite work. I would recommend this set but only if you could get this for a decent price. I recently picked this set up for £25 in Singapore which isn't bad for two Voyager sized figures. 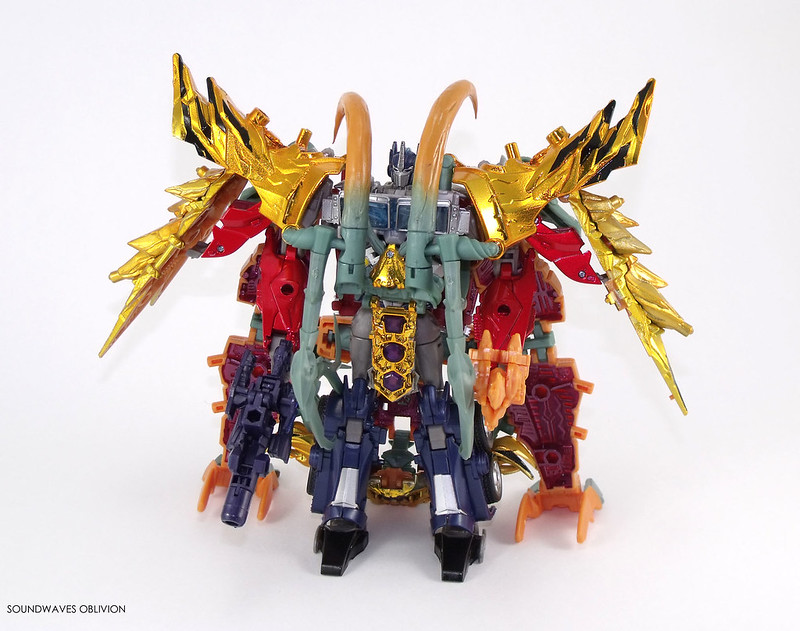 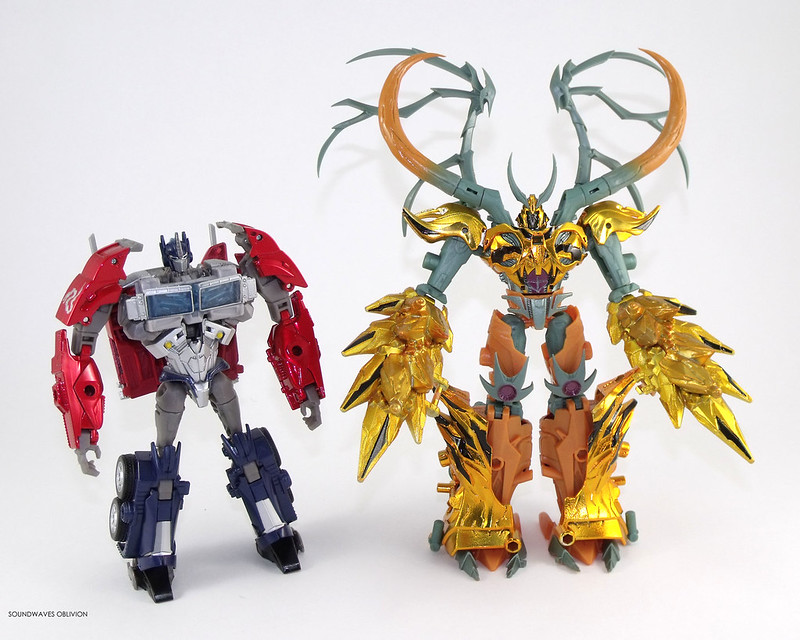