"Never do what your enemy expects you to do."

Wheeljack is the mad scientist of the Autobots. Always inventing new weapons and gadgets. Most adept at driving while in car mode. Likes to show off his stunts. Flying range of 800 miles using solid-fuel rockets in arms. Shoots magnetic inducer, shrapnel-needle and gyro-inhibitor shells from his shoulder cannons. He is his own worst enemy. Often injured while experimenting with new weapons.

Next to the Porsche 935 Turbo, Wheeljacks Lancia Stratos Group 5 vehicle mode is my favourite amongst the original Autobot cars.


In the early to mid 1970's Lancia (an Italian car manufacturer and subsidiary of Fiat - since 1969) were successful rally cars. To take part in the 1976 FIA Group 5 Racing, Lancia built the Lancia Stratos Turbo Group 5 in 1975. This was initially in the red Marlboro (cigarette manufacturer) sponsored livery but was changed to the more familiar green Alitalia (Italian airline) sponsored livery the following year in 1977.

In October 1983 under the Diaclone brand Takara released its # 18 Car Robot the Lancia Stratos Turbo. This first release was based on the Alitalia sponsored rally car (spelt "Alitalla" on the toy).

Takara later that year in December released a recoloured Lancia Stratos Turbo based on the Marlboro sponsored livery (spelt "Marlboor" on the toy). As well as the different colour the figure also had a new head. The box and the artwork was near identical to the original Diaclone release.

In 1984 Hasbro chose the "Alitalla" Lancia Stratos as Wheeljack and the rest is history; the Marlboor Lancia however was ignored and fell into obscurity. Now the Diaclone Marlboor version is highly sought after on the secondary market and commands a high price to acquire.

There have been a few versions of Wheeljack released over the past few years such as Superlink Wheeljack (based on a Mercedes Benz SLK R170), Binaltech Wheeljack (Ford Mustang GT) but I feel they never surpassed the original. The 2011 Generations Wheeljack came close but as its basically the 2010 "Reveal the Shield" Turbo Tracks mould, it feels like an after thought.

In 2013 TakaraTomy announced Masterpiece Wheeljack, based on the Lancia Stratos Turbo. The licencing was thought to be highly doubtful in the past, but as Tomy has a licence to produce Fiat toy cars (could a Masterpiece Jazz see the light of day as well?).

September 2014, Wheeljack is finally released. Amazon.jp orders came with a "Hypno-Chip Disruptor" toolbox from The Ultimate Doom part 3 and other Asian countries came with an exclusive collectors coin. In my opinion this is my favourite Masterpiece car to date and I would highly recommend it. I've found only one quality issue so far and that is the plastic on my figures right elbow is split next to the metal pin. I've seen others reported on various message boards, luckily however it doesn't affect the figure in anyway.

The "Marlboor" Lancia also finally gets an official Transformers release in March 2015. In a first for the Masterpiece line, this will be a mainstream release of a brand new character called Exhaust, a Decepticon warrior. 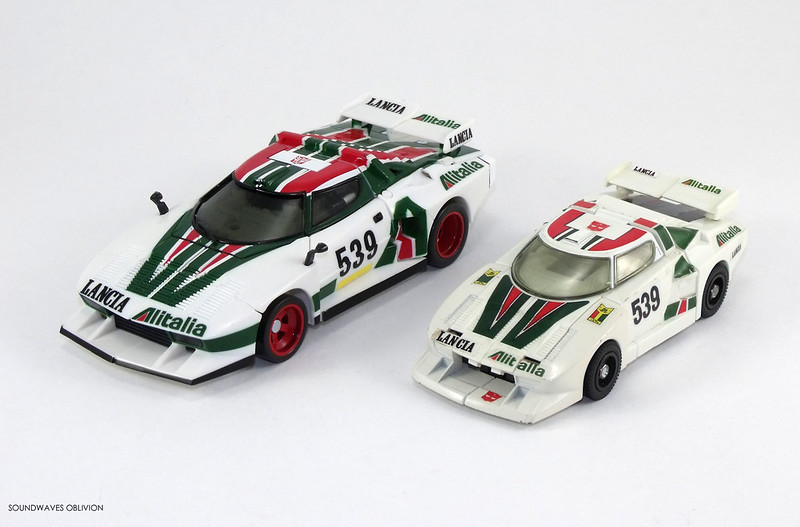 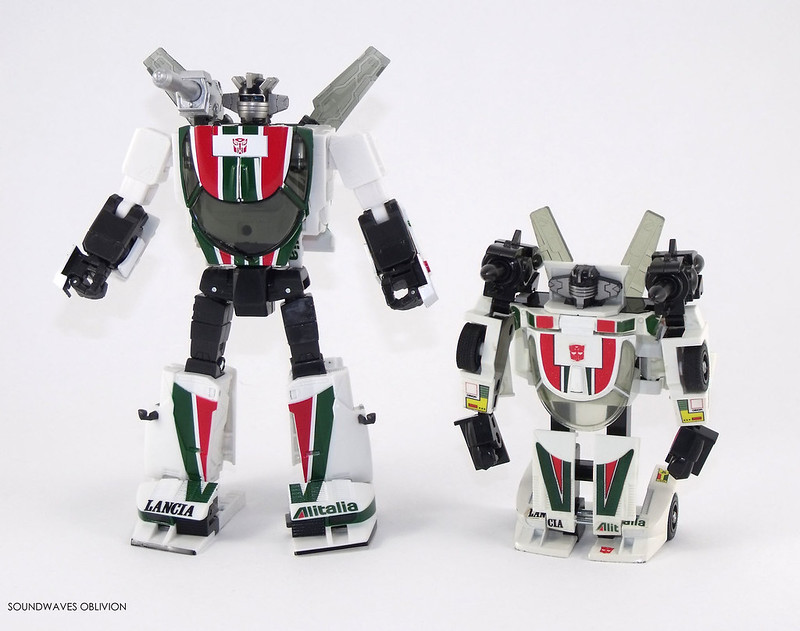