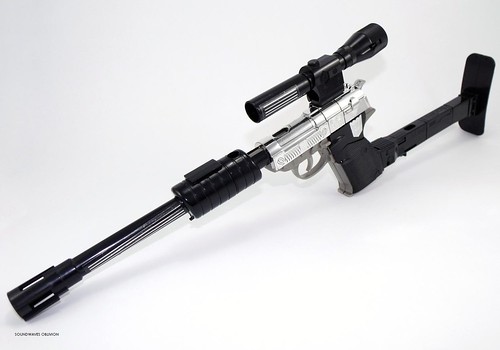 Decepticon Leader Megatron
Function: Leader
Motto: "Peace through Tyranny!"
Megatron combines brute strength, military cunning, ruthlessness and terror. Aches to return to Cybertron to conquest after destroying all Autobots on Earth. Plans to possess all Earths resources. Incredibly powerful and intelligent. Fires nuclear charged particle beam cannon. Can link up inter-dimensionally to a black hole and draw anti-matter from it for use as a weapon. No know weakness.
STR…10; INT...10; SPD...4; END...8; RNK...10; CRG...9; FPR...10; SKL...9


I've always liked the original Megatron, even the awkward looking robot mode with the suspect trigger placement. Having never owned one when I was younger (just as well as I would probably have broken it) I had to make do looking through the catalogues which came with the early figures, being fascinated how the robot turns into a thin gun mode.  Luckily the internet came along with the likes of Yahoo auctions and eBay giving me have the chance to finally own one, and now I have more than I probably should.

Megatron is a Walther P-38 pistol, slightly smaller than the real-life counterpart. The Walther P-38 started production in 1938 in Germany at the beginning of World War II as service pistols for the German army. These were predominantly black unlike the chromed finish of Megatron.


Fast forward a few decades to 1983 where Takara were producing toys under the name Micro Change, a addition to the popular Microman figures from 1974. These new figures were everyday household objects such as a micro cassettes, cassette player (Soundwave), microscope (Perceptor) and 3 gun variants which could transform into robots of the same scale. One of the guns happened to be modelled on the 1938 Walther P-38 and like the original it was black in colour. There was also a grey colour variant released in the same box as the black version. They were designated MC-12 Walther P-38 Black Type & MC-12 Walther P-38 Grey Type (note: these 2 colour variants were released in Italy by GiG but had red caps on the end of the barrel. The grey version is much harder to find).

The MC-12 Black Type was solid matt black with a brown handle, the Grey Type was matt grey with a black handle. Both had blue plastic on the underside of the legs and arms.For accessories they came with a chromed sword (Dimension Blade), a chromed gun (Automatic Laser) and blue plastic pellets. In pistol mode the pellets can be loaded in the hole in the guns body and by pressing the trigger it fired the pellets.


In 1985 the MC-12 Grey Type was repackaged by Takara under the Transformers branding and released as Japans version of Megatron the Destron Emperor of Destruction. It was released again in 1985 in the VSX box set with Convoy (Optimus Prime). This version was identical to the Micro Change version and did not come with a fusion cannon as featured in the cartoon series. For some reason they did not follow Hasbros direction as they released a different varient from the Micro Change line. The box art also showed Megatron with red inner colour however the toy had blue inner plastic like the original Micro Change version.


In 1986, Takara released the Goodbye Megatron box set where Megatron finally came with the fusion cannon but was still without the stock and scope (there was also no moulded attachment for the stock to slide on the gun handle). Additionally this Megatron came with red inner plastic like Hasbros version even though the box art depicted it blue in colour.

There was a running change to Takaras 1985 Megatron release. Underneath the moulded safety switch which becomes the left arm, early versions (including the original Micro Change versions) had a quarter circle indent moulded in. Later versions was a more prominent half circle and this has featured in Takaras mould right up to the recent reissues.


Alongside MC-12 Takara released the Walther P-38 U.N.C.L.E MC-13. This version is instantly recognisable as the version of Megatron Hasbro released. It differs from the 1984 Hasbro release as the chrome has a slight gold tint to it (note: the Italian GiG release did not have the gold tint and the end of the barrel is painted red). It came with the scope, silencer and stock as well as the chromed sword and gun and red plastic pellets. This version is not based on a real gun but the U.N.C.L.E Special from the 1960's American television series  The Man from U.N.C.L.E. 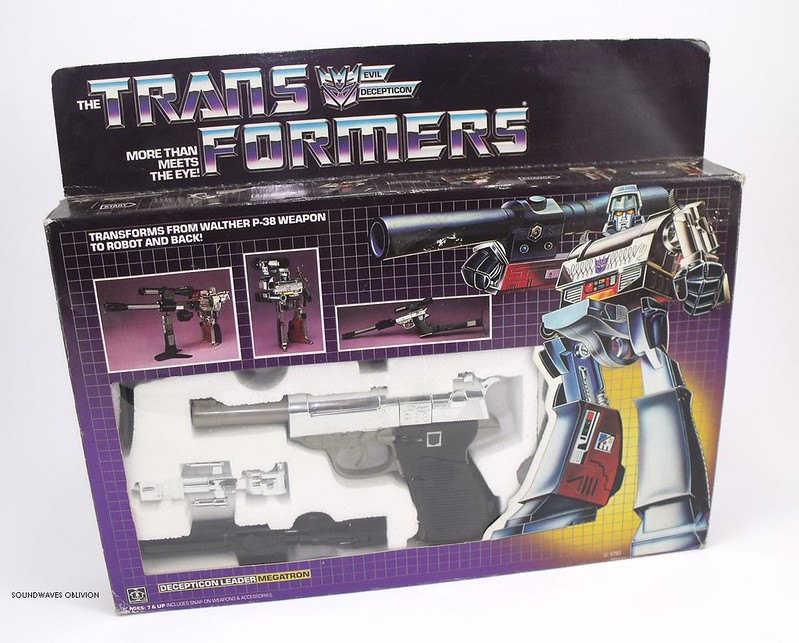 As mentioned earlier, in 1984 Hasbro went with the MC-13 as their version of Megatron. For safety reasons the spring loaded trigger was disabled and the figure did not come with the necessary plastic pellets. Although Megatron came with the chromed gun accessory it did not come with the sword accessory. This is the first and final release of this mould by Hasbro as for obvious reason they wanted to move away from the gun theme. However they did release the "Classics" Megatron in 2006 based on the Nerf N-Strike Maverick Gun and a smaller legend size figure in 2011 under the "Reveal the Shield" line which was based on the P-38 pistol.

In 2000 Takara started their line of reissues beginning with Convoy. The following year they released Megatron and this is the first time a complete and chromed Megatron would be released in Japan (if you don't count the MC-13 U.N.C.L.E.).


Also in 2001, Takara released a black version of Megatron which was e-Hobbys first exclusive Transformer. Unlike the original MC-12 which was all matt black this had a dull chrome with a brown handle. The rest of the figure such as the trigger and barrel was black plastic.
Revamping the reissue line under the "Transformers Collection" series, Transformers now came in book-box styled packaging. In 2002 Megatron was release number 6 and was identical to the 2001 release however this came with a Destron mouse mat, Destron foil stickers and a new accessory the Morning Star weapon which can be plugged into Megatron's fist.
Following the tradition of releasing colour variants of the main line Transformer Collection reissues, in 2003 Megaplex, a clone of Megatron, was made available (based on Machine Wars Megaplex from 1997) through e-Hobby. This had all the accessories that came with the 2002 Transformers Collection Megatron including a yellow version of the morning star. This time the mould was matt grey and had blue inner plastic just like the MC-12 Gunrobo and Takara's original 1985 Megatron.

When the Transformer Collection reissues finished in 2006, Takara picked up the reissue line the following year and now called the line Transformers Encore. The second release in the Encore line was Megatron. This was a straight re-release of the 2001 Megatron and did not come with the newer morning star accessory.

In 2009 e-Hobby re-released their black Megatron exclusive. This was almost identical to the original but came in a different box, similar to the 2003 Megaplex.


The last Megatron release (so far) of the Walther P-38 mould was in 2011 under the Transformer Chronicle series. Megatron was released together with the Dark of the Moon Megatron (which itself had an improved redeco from the standard release). This version of Megatron mirrors the Goodbye Megatron release from 1986. Megatron is not chromed but is matt grey and has red inner plastic. It comes with the chromed sword and gun, plastic pellets and fusion cannon. Although it does not come with the stock and silencer, unlike the Goodbye Megatron, you can still attach the stock to the handle. 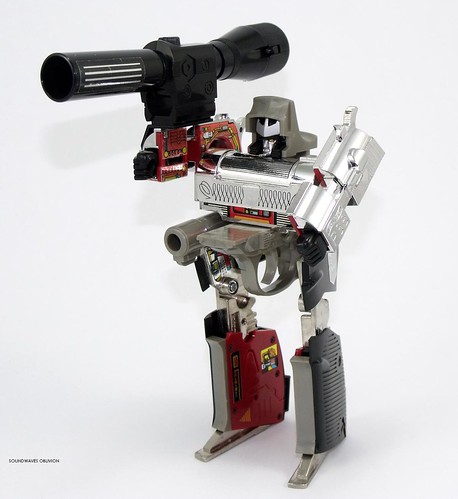