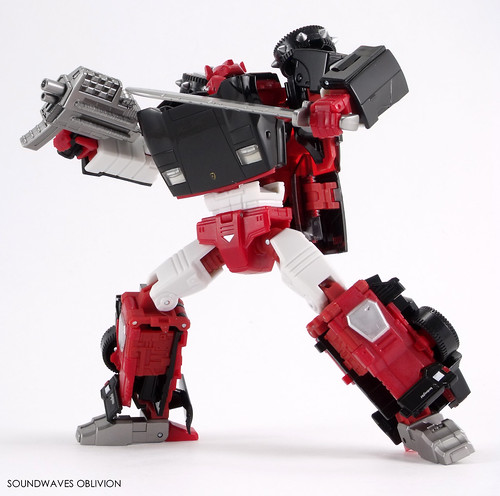 Profile (Translated from the Character Card)
MP-12G Cybertron Warrior Lambor G-2 Ver.
Function: Warrior
Motto: “I don't break rules, I bend them - a lot!"
Profile:
One of the warriors who belong to the “Firestormers”, a combat unit set up to annihilate Destron resistance. A veteran warrior who has fought the Destrons for a long time and he finds that fighting gives him purpose. Has a rather ruthless streak for a Cybertron and wants to win by any means, even using underhanded tactics if necessary.
STR...6; INT...7; SPD...7; END...7; RNK...5; CRG...10; FBL...3; SKL...6 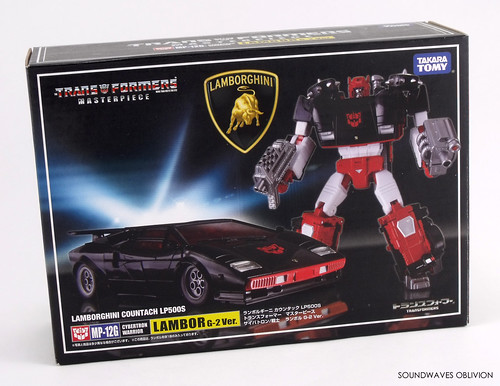 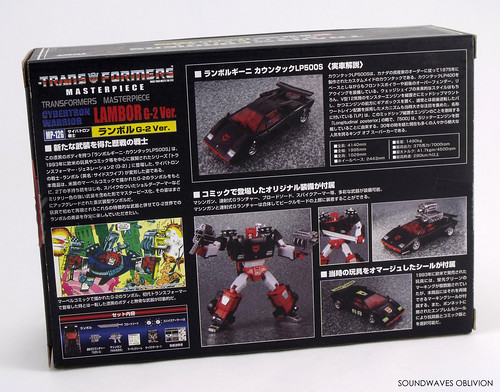 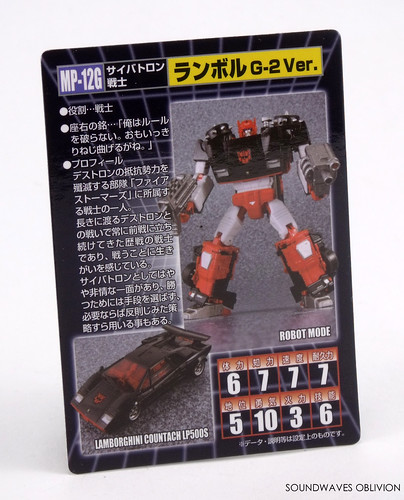 Released near the end of February 2014 and retailing for 6,500 Yen, Lambor G2 ver is based on a Transformer toy and comic series, neither which saw a release in Japan. When the Transformers Generation 2 toyline debuted in late 1992 the initial releases were reissues and recolours of selected 1984 / 1985 figures, Sideswipe being one of them. 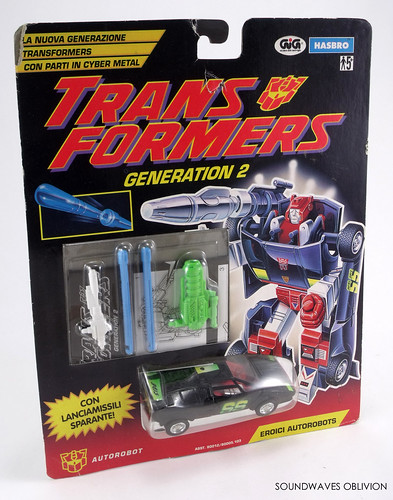 Sideswipe colours were reversed, the red parts were recoloured black and the black parts coloured red. A new hole was added to the car roof to plug in a new very plastic looking missile launcher. Sideswipe came with his original hand gun but the rocket launcher was omitted. Other than the different colours the Sideswipe character was identical to the 1984 version. 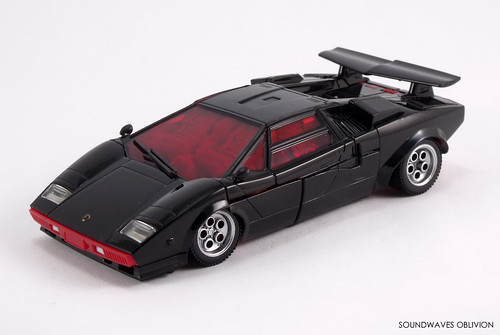 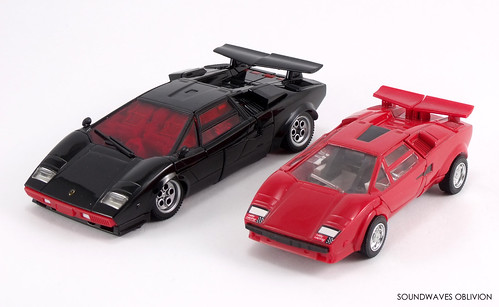 The first issue of the Transformers Generation 2 comic introduced the Firestormers, a band of Autobot resistance fighters, one on whom is Sideswipe. This version of Sideswipe uses the G2 toys colours but has a grittier design, almost like something out of the 2000 AD comics, incorporating larger guns, swords and spiked wheels. 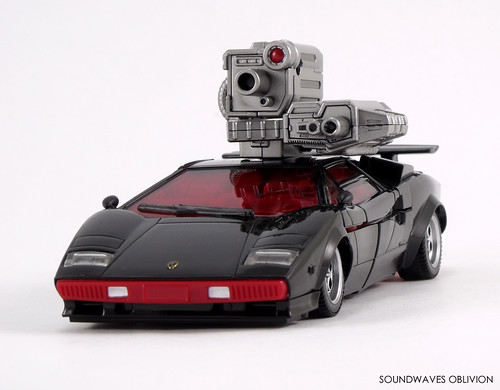 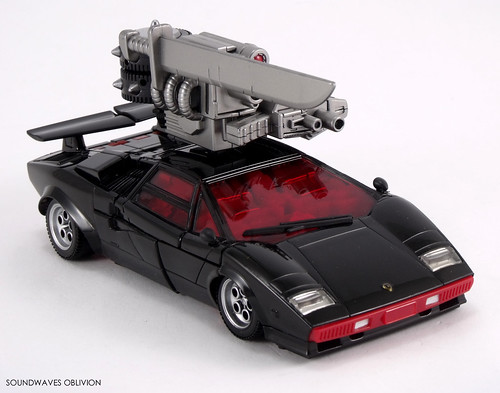 Lambor G-2 ver is mainly a straight repaint of MP-12 Lambor however it also features a new face sculpt and accessories to emulate the comic version. The new face is taken right out of the comic with exaggerated proportions, it would have been nice to have changeable faces so you could alternate between a standard face and a comic face. The new weapons do look good with two exaggerated guns, a large broad sword and two spiked wheels which peg into Lambors shoulders. They can also combine and sit atop the vehicle mode. 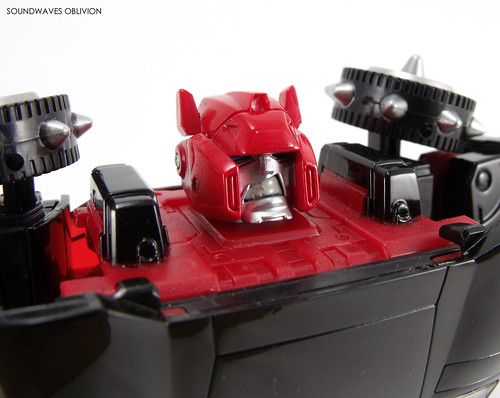 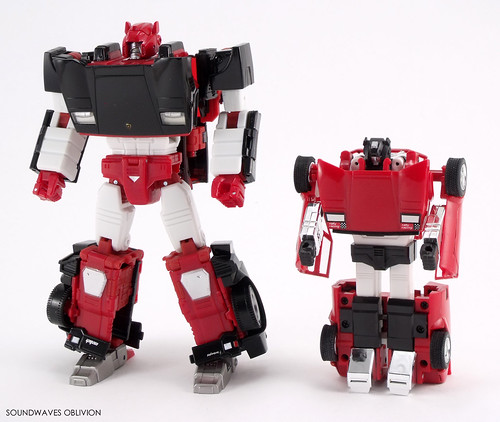 The vehicle mode looks great with a gloss black finish and tinted red windows. The red windows weren't in the comic but it was a great design choice for this release. 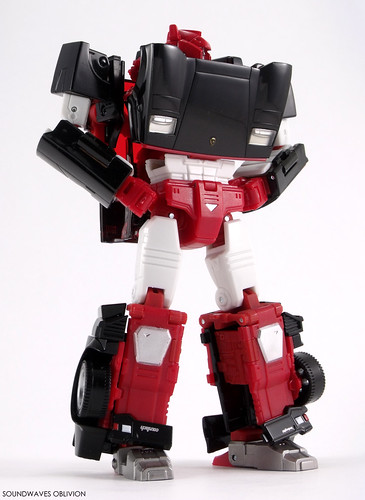 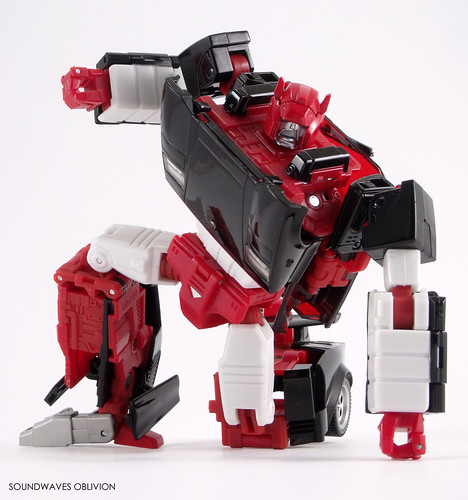 Lambor also comes with a sticker set so you can add them to the figure to make it look like the 1992 toy. The comic version did not have any of the neon green stickers but it did have a large "G2" styled Autobot logo on the bonnet and there is a sticker for that too. 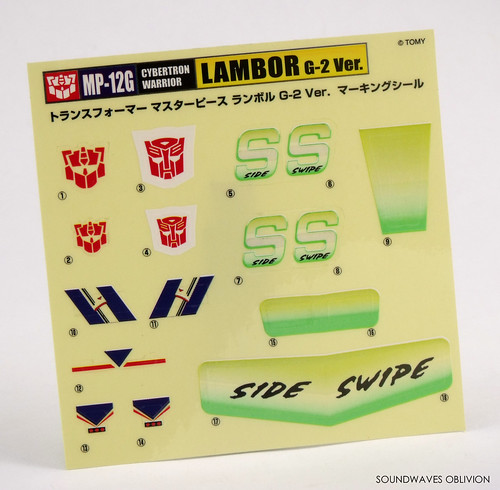 This Masterpiece figure inspired a "mainstream" release in 2019 with the Amazon exclusive Transformers Siege "Autobot Alphastrike Counterforce", a giftset of Slamdance and "Covert Clone Sideswipe". This version of Sideswipe is a clone created by the Decepticon Jhiaxus. 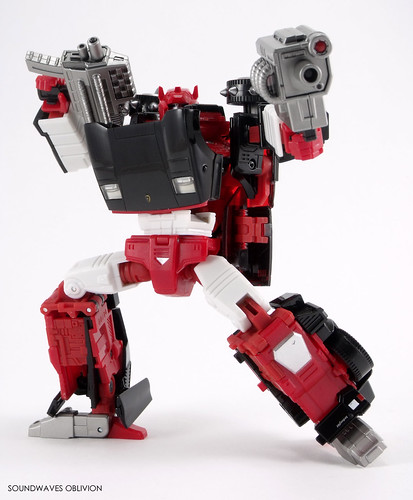 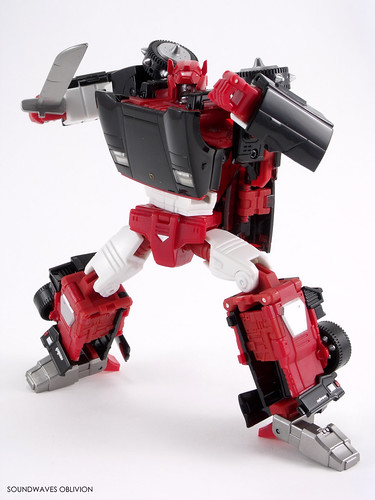 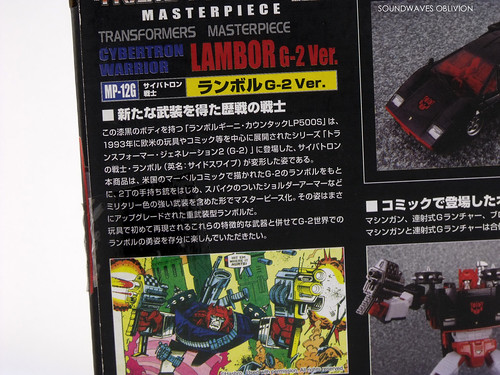 ■ A newly armed veteran warrior. (Translated from the back of the box)
The Cybertron warrior Lambor (English name Sideswipe) is a jet black “Lamborghini Countach LP500S” who appeared in “Transformers Generation 2 (G-2)” through western toys and comics in 1993. This Masterpiece product is based on Lambor as seen in the Marvel Comics in the United States and comes with two hand held guns, spiked shoulder armour as well as other military styled weaponry. He now has the appearance of a heavily armoured Lambor. We hope you enjoy G-2 Lambor with the characteristic weapons which have been reproduced for the first time in toy form. 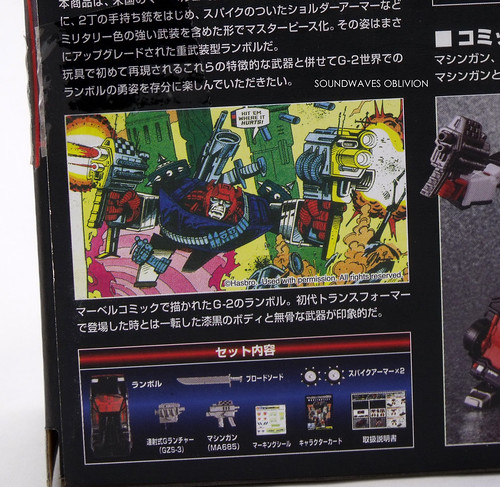 ■ Comes with stickers which homage the original toy. (Translated from the back of the box)
The toys released in Europe and the United States in 1993 came with fluorescent green stickers and this product also comes with a set of replica stickers. You can also choose between the toy or comic emblem to attach to the car bonnet. 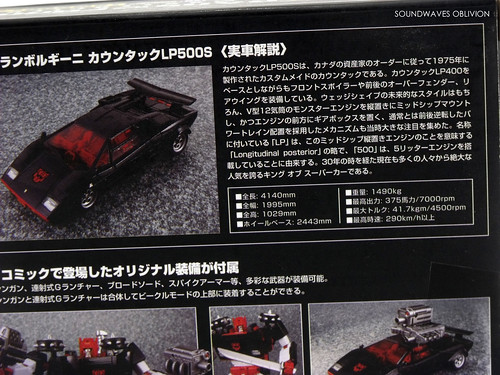 Lamborghini Countach LP500S (Actual Car Notes) (Translated from the back of the box)
The Countach LP500S was custom made in 1975 in accordance with the specifications of a Canadian industrial magnate. It is based on the Countach LP400 but has a front spoiler, a front and rear fender and a rear mounted wing. It has a futuristic wedge shape, a mid-mounted V type 12 cylinder monster engine and the gearbox placed in front of the engine. The reversal of the powertrain attracted a lot of attention at the time. The “LP” attached to its name stands for “Longitudinal Posterior” meaning the mid-positioned engine and 500 cones from the 5 litre engine. 30 years have passed and still this is the king of the supercars and is still incredibly popular. 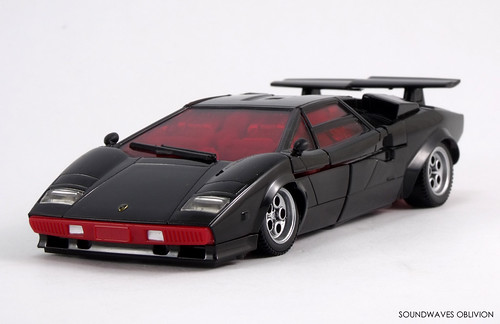 Vehicle Mode: Lamborghini Countach LP500S (Translated from the instruction pamphlet)
In G-2, Lambor is a gleaming jet black Lamborghini Countach LP500S. He retains the same vehicle mode he had since awakening on Earth after 400 million years in stasis yet the colour of his body has changed from “crimson” to “jet back”. The change in colour is not the result of rescanning another vehicle but is the effect of constantly repairing his body from combat damage. As a result however, the sight of his jet black body intimidates and overwhelms his enemy as he heads to the battlefield. Modifications Lambor has made to his body has allowed additional weaponry, his large guns, to also operate in vehicle mode. This measure has significantly reduced Lambor’s firepower but his main objective is to seize enemy bases and engage with the enemy quicker than his comrades. The speed and offensive capability of his vehicle mode is exactly what he needs. The high-speed fighting on the battlefield perfectly complements his overseas name, “SIDESWIPE (a side-on collision)”. 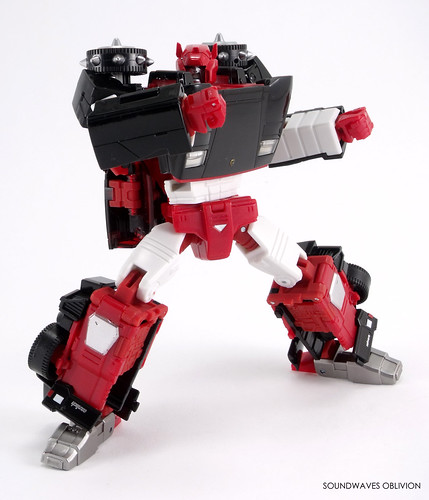 Robot Mode: Lambor (Translated from the instruction pamphlet)
Function: Warrior
Motto: “I don't break rules, I bend them - a lot!"
Profile:
Lambor looks very different than he used to; after many battles against the Destrons he has had to make do with spare parts for repairs. However, his patched up body is a testament to Lambor’s strength and shows just how tough he’s become despite his injuries. He is a skilled and capable warrior, he also wields heavy duty guns in both hands which effectively annihilate enemy opposition. Lambor is still actively engaged in the fight and belongs to a specialist unit called the “Firestormers” set up to eliminate the few remaining Destron resistance fighters. For a Cybertron, he has a rather ruthless streak and enjoys the battle. He will win by any means and will even use underhanded tactics if necessary. Other than his gruff demeanour, Lambor has no noticeable weaknesses. Often dives head first into danger as he doesn’t consider the consequences, however his courage and tough exterior are enough to see him through. When he fights he creates an opening allowing his comrades to break through onto the battlefield. 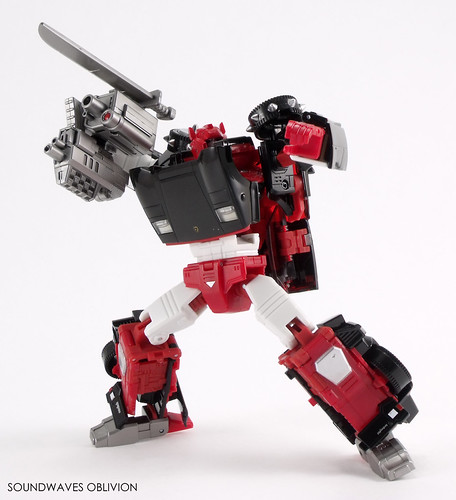 Lambor’s Main Equipment (Translated from the instruction pamphlet)
Lambor is equipped with mass-produced weapons designed for continuous fire. He is also outfitted with spiked armour and a broad sword for close combat. Both guns are “anti-Transformer weapons” which fire live ammunition rounds with energy amplified by an internal generator. These are incredibly powerful and have rapid fire. The only disadvantage is he has to carry a lot of ammunition during battle.
Posted by Jeremy Barlow at 10:04