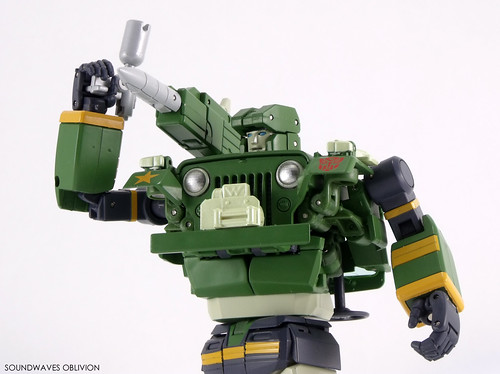 Profile (Translated from the Character Card)
MP-47 Cybertron Scout Hound
Function: Scout
Motto: “Observe everything, remember even more.”
Profile:
Hound is a brave and loyal Cybertron Scout who transforms into a jeep. Finds the natural wonders of Earth fascinating and loves its many cultures; has a secret desire to be human. 3D images projected from his hologram gun have distracted the enemy and saved his friends on many occasions.
STR...5; INT...8; SPD...5; END...7; RNK...6; CRG...9; FBL...3; SKL...9 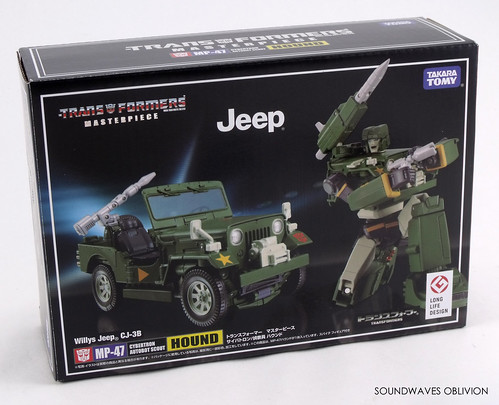 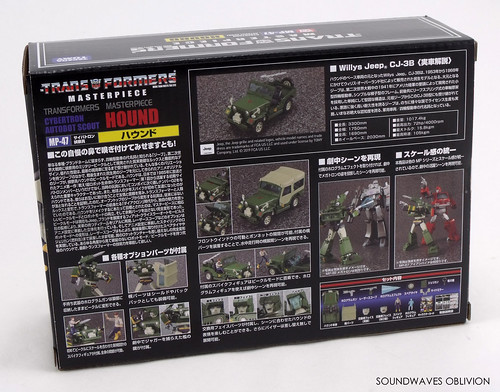 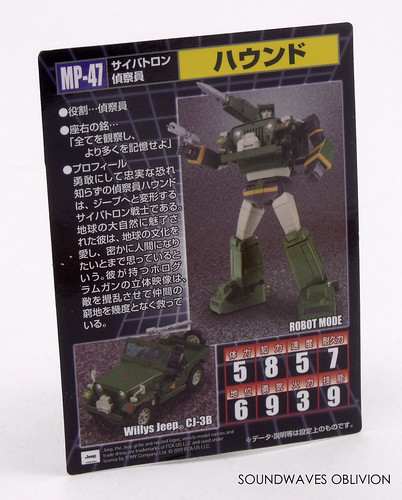 Masterpiece Hound was first displayed at the 2018 Summer Wonder Festival (aka WonFes) on the 29th July in Chiba, Japan. Hound's robot mode was a fully painted prototype and was positioned next to a grey resin prototype of MP-44 Convoy.
According to a Hasbro Asia representative, there were tolerance issues with Hound's shoulder joint so they were redesigned and the updated prototype was displayed the following year at the 2019 Winter Wonder Festival on the 10th February in Chiba, Japan. It was at this display where we received confirmation of Hound's MP numbering, MP-47. Still at this point Hound's jeep mode had not been on display. 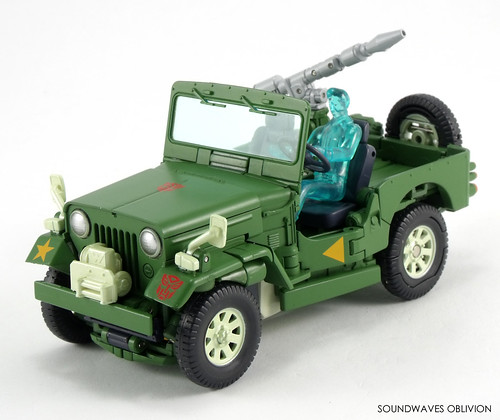 Finally in June 2019 official photographs of Hound in both modes appeared on Takara Tomy Mall and other online Japanese retailers. Hound was released late December 2019 and retailed for 18,000 Yen and is to date the most expensive Cybertron car, however when you have this figure in hand you can argue it is money well spent. 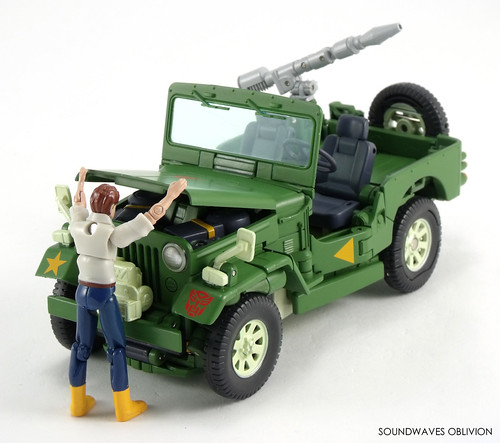 Hound is packaged in Jeep most and comes with a host of accessories. Much like the original toy, Hound comes with a spare tyre and fuel can which attach to the rear of the jeep. There is also the mounted Laser Scope which can attach to the flatbed of the jeep behind the passenger seat. Hound comes with two drivers, one is a translucent blue hologram driver in a fixed seated position and the other is an articulated Spike figure which is much larger than the Spike figures which came with MP-44 Convoy or MP-45 Bumble. Another bonus of this Spike figure is that as it is larger, it has much better joint tolerances so it doesn't fall apart when you move it like the smaller Spike figures. 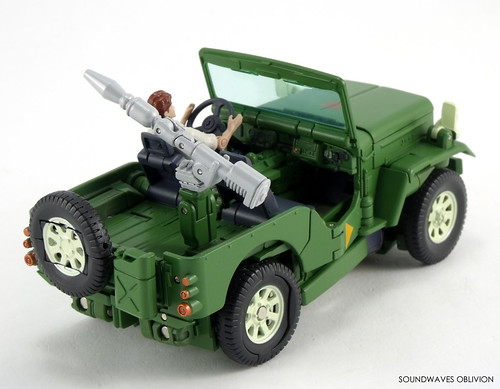 A removable canopy is also included which attaches to the Jeep mode to give it a roof. This actually made an appearance in the episode "Atlantis, Arise!". 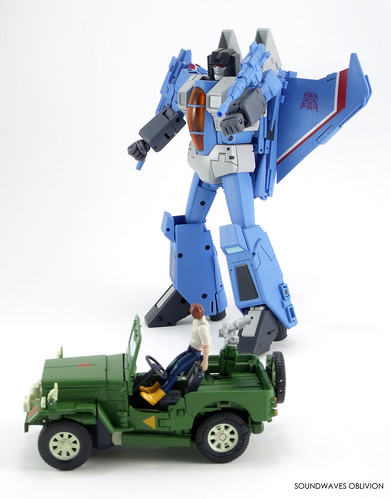 Another nice touch with the vehicle mode is the bonnet can open, harking back to the Binaltech cars, although this does not reveal an engine you can still make it look like Spike has to fix something. Although the jeep has been simplified to look like the cartoon model, there are still details there such as the Jeep logo above both front wheels and the dashboard is also painted. 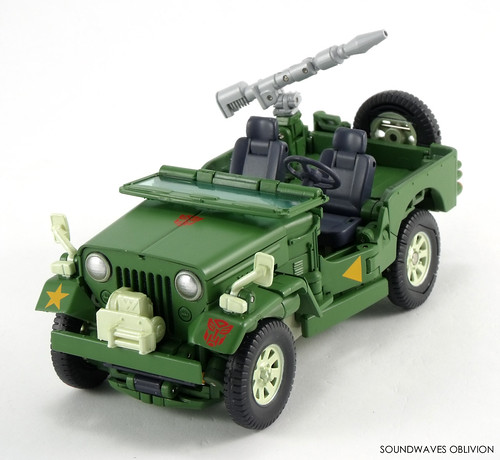 Transformation is incredible and everything has a place. The leg transformation can be nerve-racking with the thin panels but it is very clever. The tires themselves fold up and fold inside the legs, the seats also fold into the feet. You can also fold up the spare tyre and laser scope and fold them in the feet as well, although I opted to remove them. 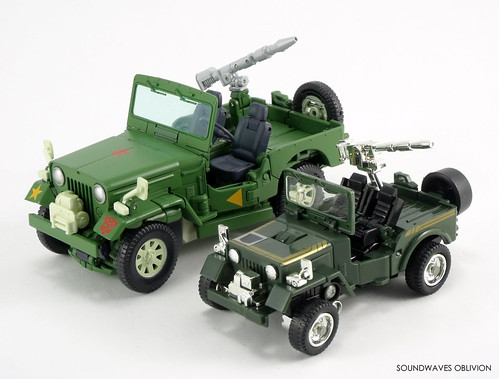 The vehicle's centre console is part of the shoulder mounted missile launcher and is also attached to the robot head. 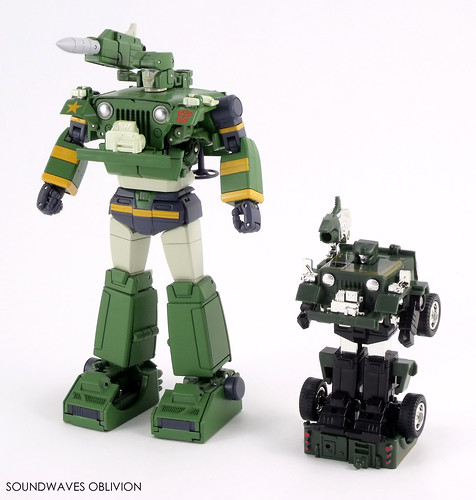 The robot mode is near identical to the cartoon model and is packed with articulation. The canopy roof in robot mode can either attach to Hounds back or it can be used as a shield. Another function it has is storage for the majority of Hound's accessories. 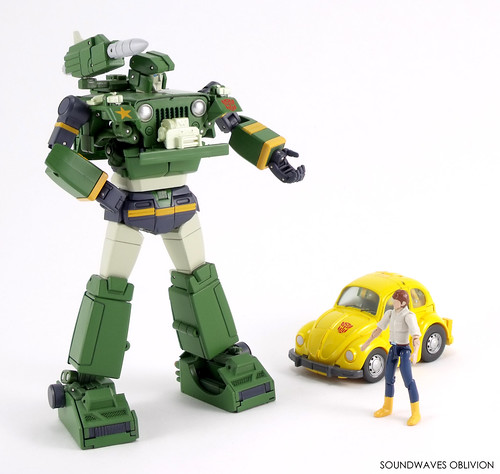 Hound has his hand-held Hologram Gun which can separate and store inside the leg panels. When the cartoon model was designed, Hound was drawn holding his gun raised as at the perspective it looked short (much like how the original boxart was drawn) and this was incorrectly drawn short in the cartoon as a result. The original toys gun was a much longer rifle. There is also a translucent blue cone accessory which is Hound's hologram projection effect and plugs in to the end of Hounds gun. 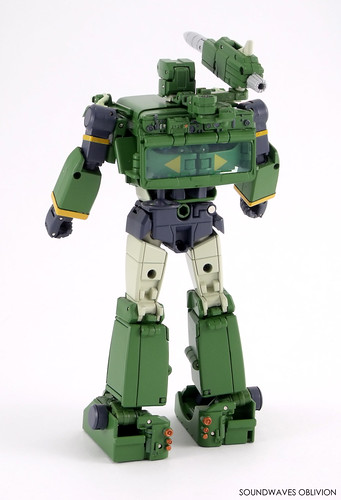 Hound also comes with two other faces to accompany his neutral face and include happy and shouting expressions. In order to change the faces you need to lift the top of the head which was rather stiff on my copy. In doing this you can also lower the visor which was also quite stiff to pull out. 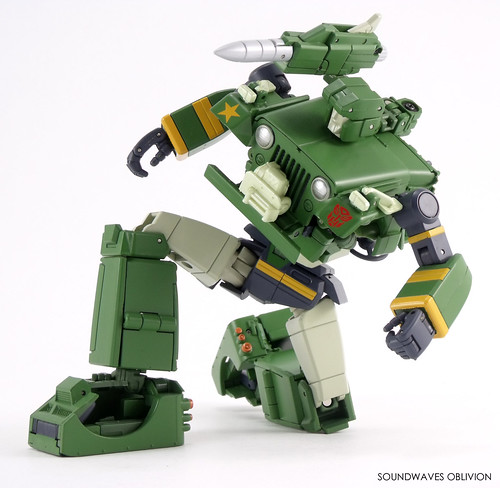 The smallest of Hound's accessories is a single key which is used to lock the cage Jaguar was imprisoned in the third episode "Escape from Earth." / "More Than Meets the Eye, Part 3". There is a hook on Hounds waist which can be flipped out and the key can be placed on it to reenact that scene. 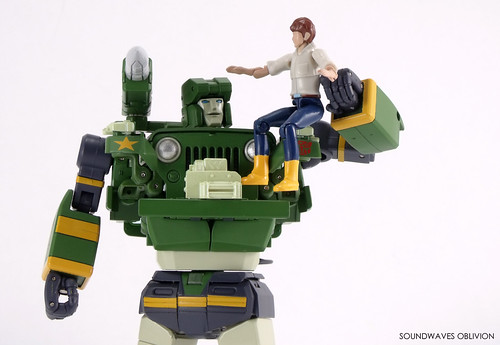 In my opinion, MP-47 is the best carbot released so far which makes this figure even more bittersweet. Since its release there have been many reports of breakages either with cracks out of the box, breaking during transformation or cracks appearing over time. My Hound had two cracks straight out of the box, one in the left foot by a pin joint and the other is the more common neck armature. I was able to sand down the peg which fits in the armature and this hid the crack. Over time mine developed a crack in the green plastic by the left wing mirror and the final crack was the hinge for the right side of the jeep. I do hope these complaints are the minority but if a reissue is announced I will definitely be picking one up. 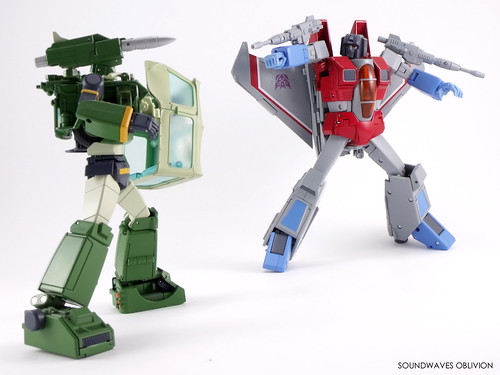 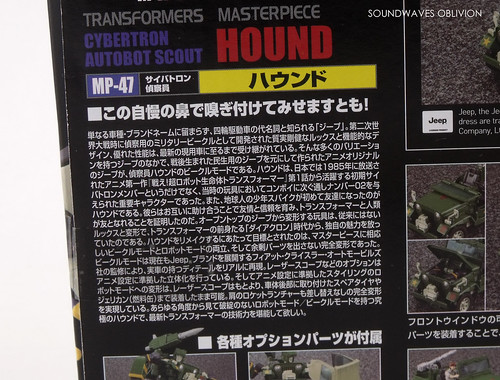 ■ I’ll show you how to sniff them out! (Translated from the back of the box)
“Jeep” is a name synonymous with four wheel drive vehicles and not just a brand name. They were initially developed for reconnaissance during World War II; their simple and robust look, functional design and excellent performance have been passed down to the latest models. There are so many variations of jeep, Hounds is based on the original cartoon design which itself was based on domestic jeeps after the war. Hound is an important character, not only was he an early member of the Cybertrons seen in the first episode of “Fight! Super Robot Lifeform Transformer” broadcast in Japan in 1985, but his original toy was designated 02 after Convoy. Hound was also the human boy Spike’s first friend. They built their friendship by helping each other which proved there could be a fellowship between humanity and the Transformers. Hound’s open top jeep mode has a unique look and transformation which has had its own charm since the “Diaclone” era, the predecessor of the Transformers. The goal of making Hound suitable for the Masterpiece series was to be able to transform him between robot and vehicle mode without leaving any surplus parts. Hound has retained his Jeep vehicle mode which was developed under the supervision of Fiat Chrysler Automobiles who own the brand. Details of the actual vehicle have been accurately reproduced and additional details seen in the cartoon such as the laser scope have also been included. It is now possible to transform Hound into robot mode with the laser scope, spare tire and jerry can (fuel can) still attached. The rocket launcher has also been designed as an integral part of the transformation so it doesn't need to be removed during the transformation. Made utilising the latest technologies, we would like you to enjoy the ultimate Hound whose robot and vehicle mode look great from all angles. 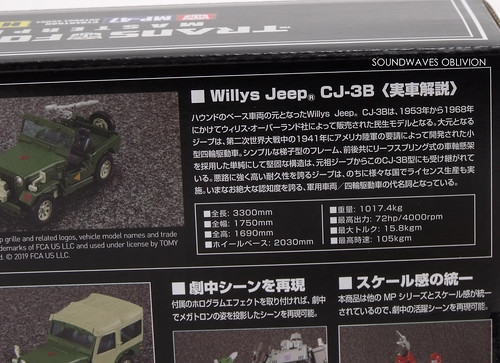 Willys Jeep CJ-3B (Actual Vehicle Notes) (Translated from the back of the box)
Hound’s base vehicle is based on a Willys Jeep CJ-3B which was a consumer model sold by Willys Overland between 1953 and 1968. The original Jeep was a small four wheel drive vehicle developed at the request of the United States Army in 1941 during World War II. The simple yet solid structure adopted a ladder shaped frame and leaf spring suspension on both front and rear wheel has been brought across from the original Jeep to the CJ-3B model. The Jeep is durable on the roughest terrain and has been licensed and produced in a variety of countries. The Jeep is instantly recognisable and is synonymous with military and four wheel drive vehicles. 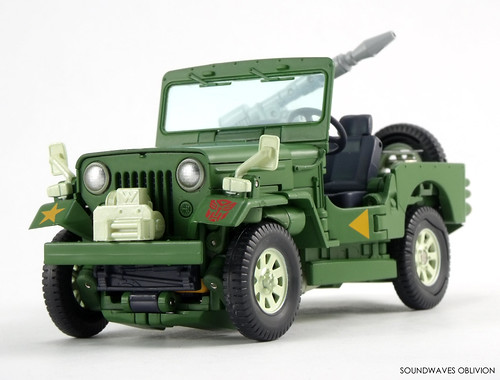 Vehicle Mode: Willys Jeep CJ-38 (Translated from the instruction pamphlet)
The Jeeps appeal is its simple yet sturdy styling with little in the way of decoration. As an all-terrain four wheel drive vehicle, fitted with off-road tires, its design is functional. Hound’s vehicle mode is an anime Jeep with a unique design featuring an open-top body and an exposed driver's seat. The dull olive (dark green) paint and laser scope which imitates a 12mm machine gun at the rear brings a military flavour. There is a definite connection with this vehicle mode and the Transformers personality. The Jeep was developed as a reconnaissance vehicle and as Hound is a Scout, this is a perfect match. Compared with his metallic homeworld of Seibertron, the Earth with its natural environment is more suited to his taste. As Hound drove through the vast expanse of the North American continent admiring its beauty, he once told Spike “I’d like to stay here forever.” 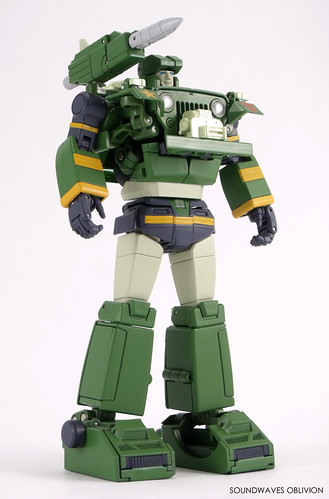 Robot Mode: Hound (Translated from the instruction pamphlet)
Function: Scout
Motto: “Observe everything, remember even more.”
Profile:
Hound, the scout, was one of the initial Cybertron members and played a lead role in the first three pilot episodes of “Fight! Super Robot Lifeform Transformer”. It can be said that these episodes perfectly capture Hound's nature. He was also the first Cybertron warrior to bond with the human boy Spike. As well as reconnaissance, his other mission is to report on enemy activity. He has a long rivalry with the Cassettron spies such as when Condor blasted him off a cliff, battling Frenzy beneath the dam lake and strategically capturing Jaguar. What is most impressive is his ability to create realistic “holograms” which have been key to avert a crisis on many occasions. The stereoscopic images from his hologram gun (the appearance of which varies in different episodes) not only deceives humans but also the Transformers own optical sensors. He can easily create small or large images such as Transformers, drivers, a giant warrior to fool Devastar and even rocket bases. Arguably Hound is more “Cybertron” than the others as he chooses to fight with his abilities rather than weapons. 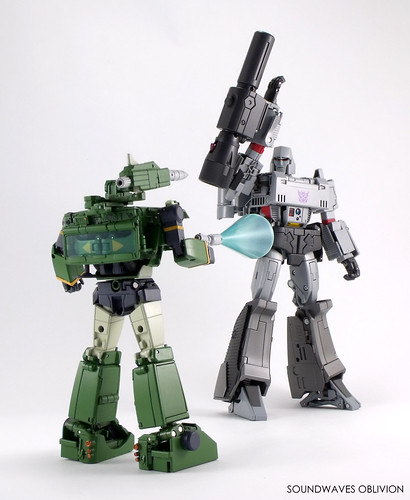 Weapon: Hologram Gun (Translated from the instruction pamphlet)
This is Hound’s hologram projection device. In the 27th episode of the cartoon series “Desertion of the Dinobots Part 1”, Hound projects an image of Megatron signalling the Destrons to retreat. It can also be used as a normal gun. 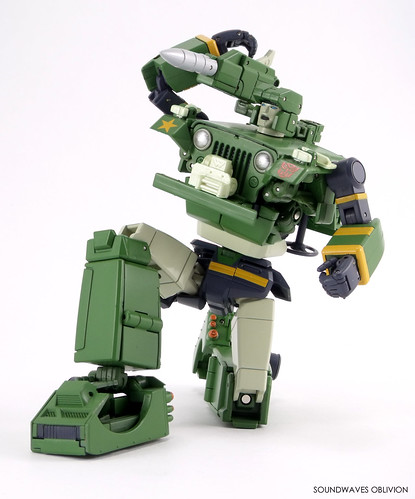 Weapon: Missile Launcher (Translated from the instruction pamphlet)
Hounds missile launcher is attached to his right shoulder; it can also function as a radar and hologram gun. In the 7th episode “Birth of the Dinobots” it can be seen folded down on his back when he was not engaged in combat. 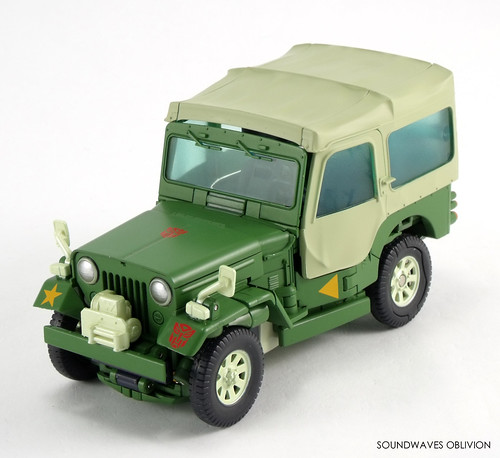 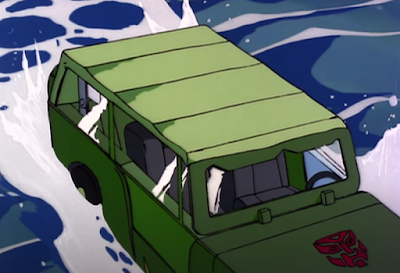 Option: Soft Top (Translated from the instruction pamphlet)
The Cybertron’s vehicle modes also have special aquatic functionality; when Hound goes underwater his open top vehicle mode is covered with a canopy. This Masterpiece can also use the soft top as either a hand held shield or a backpack. 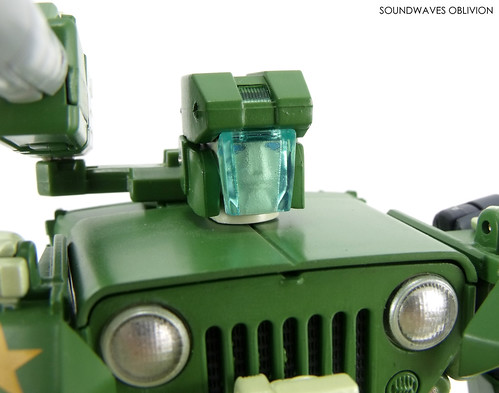 Option: Visor (Translated from the instruction pamphlet)
The visor was used by Hound in the second episode “Secret of the Ruby Crystals”, when Hound entered the dam lake to investigate the cause of the tidal wave. The searchlight which appears on his forehead illuminates the dark depths of the lake. 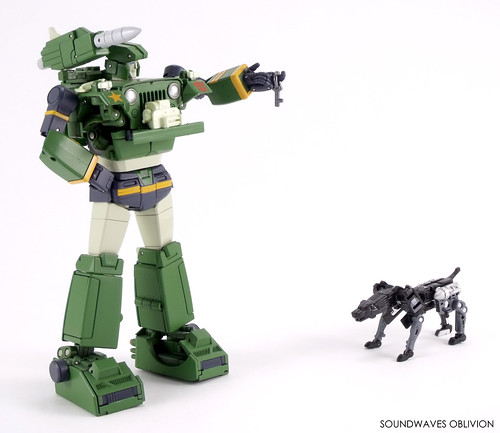 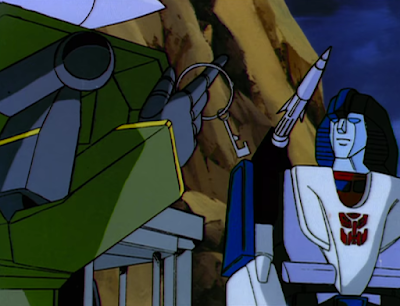 Option: Key to the Cage (Translated from the instruction pamphlet)
This is the key to the cage which imprisoned Jaguar. In the first episode “The Road to Earth” Hound twirled it round his finger and purposely dropped it in front of the cage to allow Jaguar to escape. This item symbolises the strategic battle between both factions.
Posted by Jeremy Barlow at 15:10