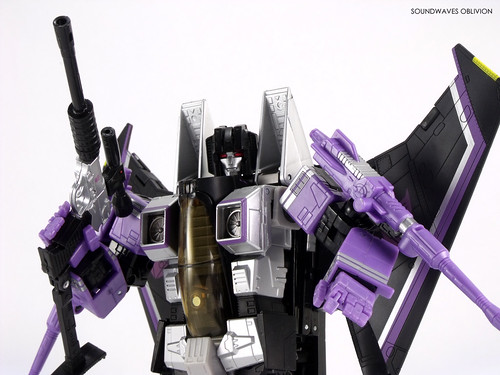 Profile (Translated from the Character Card)
MP-11SW Destron Aerial Warrior Skywarp
Function: Aerial Warrior
Motto: "Strike when the enemy isn’t looking."
Profile:
Skywarp is the sneakiest of the Destrons. He could never be called smart and would be confused without the command of Megatron. He can reach speeds of Mach 2 to 2.4 per hour; additionally he can warp (teleport) up to a distance of 4km.
STR...7; INT...9; SPD...10; END...7; RNK...5; CRG...9; FBL...8; SKL...8 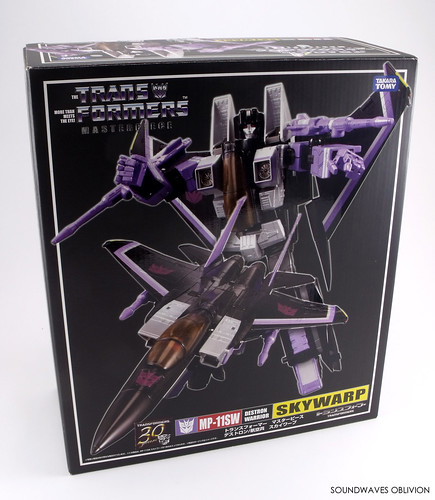 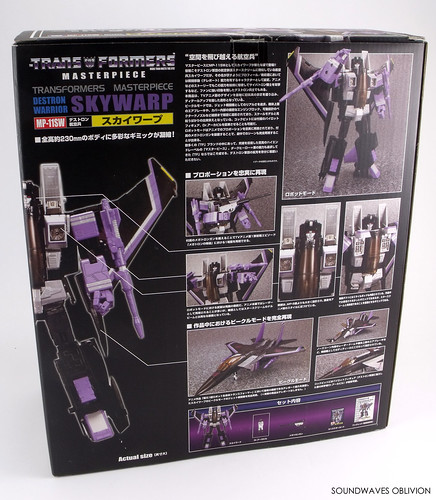 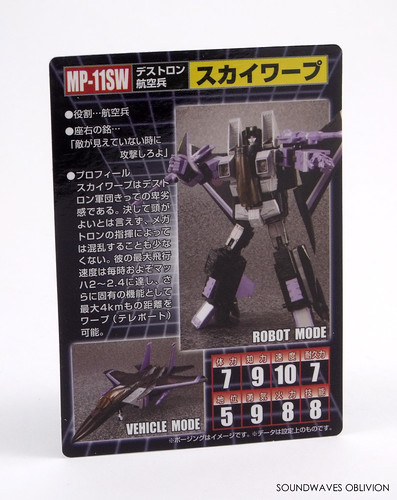 MP-11SW Skywarp was initially a Chinese only exclusive, released early January 2015, although some were released earlier in late December 2014. This is the version pictured here. Although at this time only seeing a Chinese release the box, instructions and character card were still in Japanese although it did come with an additional instruction manual printed in Chinese. Skywarp was released in Japan as a Takara Tomy Mall exclusive in September 2016; this version was not entirely identical to the Chinese release as it featured subtle paint differences. 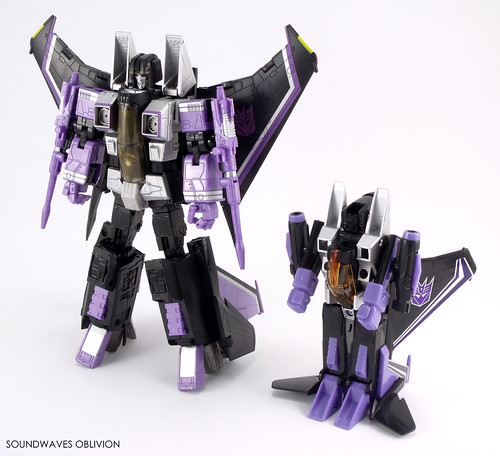 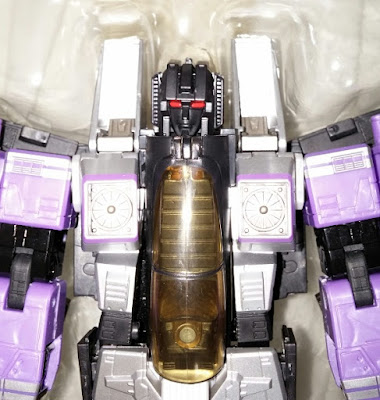 Oddly enough the version I received had an unpainted face which I was luckily able to replace. 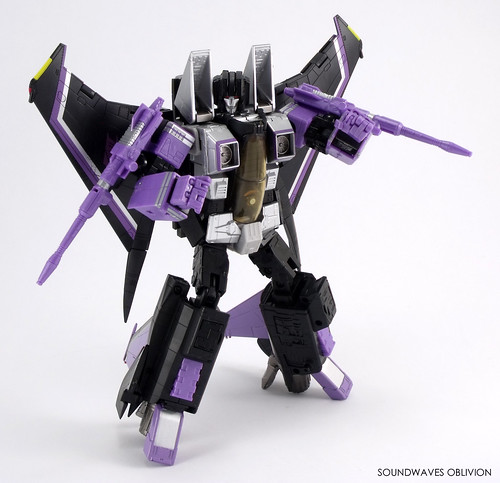 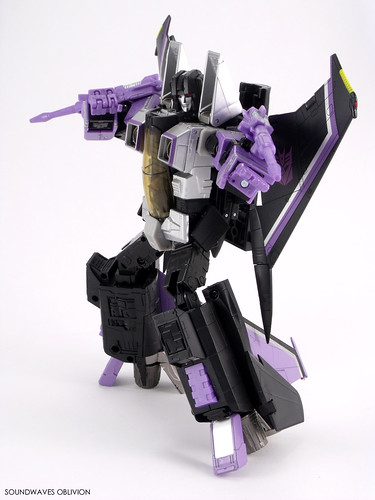 Skywarp is definitely a major upgrade from the previous 2007 MP-6 Skywarp until you have it side by side with the MP-52 Starscream and then it looks rather dated. Skywarp's accessories are also rather minimalist as he comes with the standard Megatron gun which also came with several other Masterpiece figures and a Dr Arkeville pilot unlike the hologram pilot released with MP-11 Starscream and MP-11T Thundercracker. 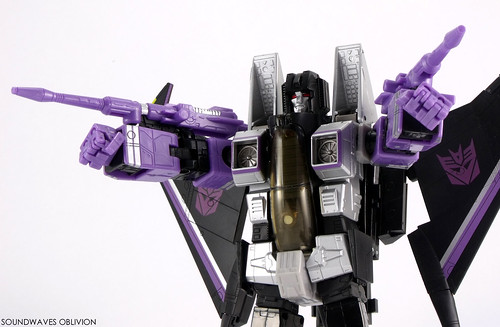 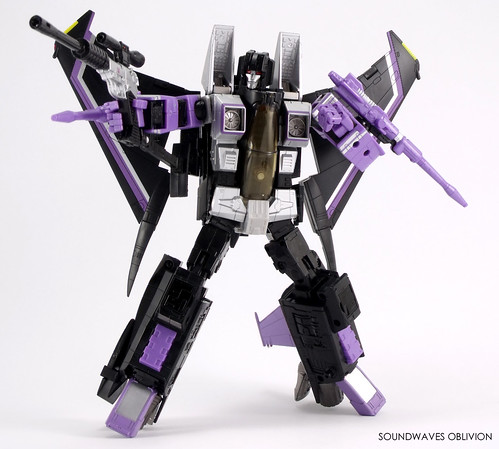 Skywarp comes packaged in robot mode and although looking dated by todays standards, he still looks impressive. Between the MP-11 Skywarp and Thundercracker, Skywarp is my favourite as the fingers don't pop off and the joints aren't overly tight. Like the other versions of this mould posing is quite tough especially with the restrictions with his legs. 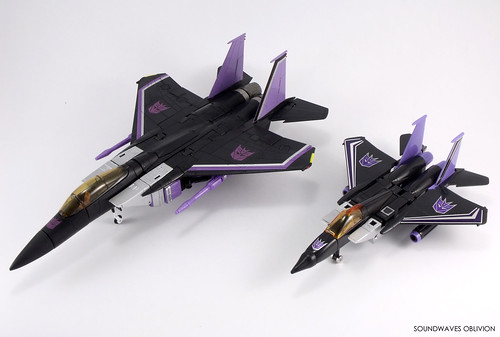 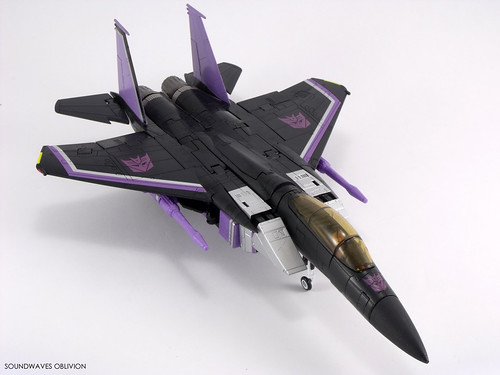 Skywarps jet mode looks great and again is an improvement over MP-6 Skywarp's look. Although MP-6 Skywarp had a better gloss black finish than the matt black of MP-11SW, there is nothing about the jet mode that looks like Skywarp. 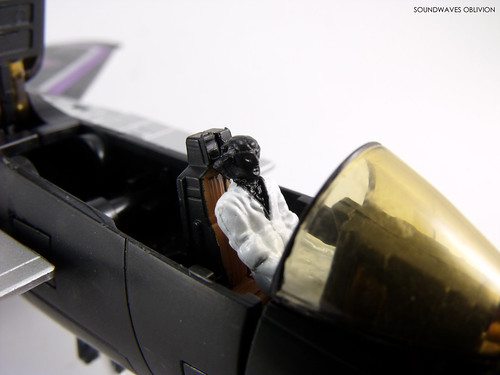 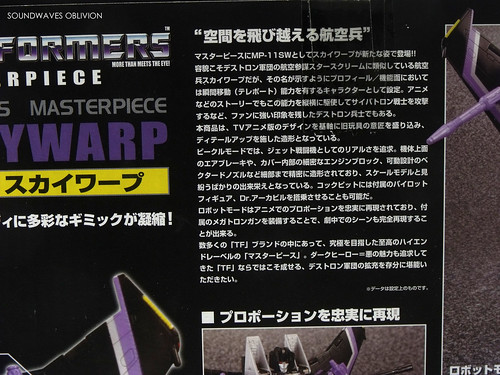 “The Aerial Warrior warps to space” (Translated from the back of the box)
Skywarp has an updated appearance as MP-11SW in the Masterpiece series!! Skywarp is an Aerial Warrior similar in appearance to the Destron Air Commander Starscream but as his name implies, he has a unique teleportation ability. Using this ability in the cartoon left a strong impression on fans.
This product has an improved appearance based on Skywarps design from the cartoon with added details from the original toy.
His vehicle mode is a realistic jet fighter; an air brake is included on the top of the fuselage, there is a detailed engine block and movable vectored nozzles. This detailed design can easily be mistaken for a scale model. You can also fit the pilot, Dr Arkeville, inside the cockpit.
The robot mode faithfully reproduces the cartoon proportions and by fitting the Megatron gun in his hand, you can recreate scenes from the cartoon. Amongst the many Transformer brands, the high-end “Masterpiece” aims to be the ultimate.
We hope you enjoy this addition to the Destron army with the charm of this evil Dark Hero.
Posted by Jeremy Barlow at 11:58