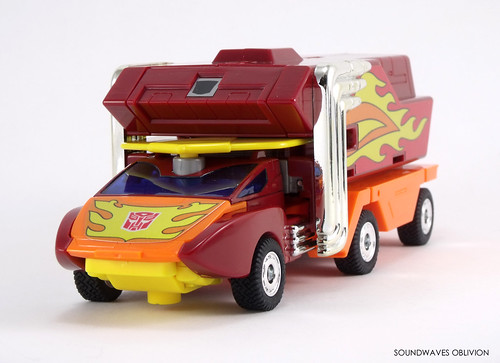 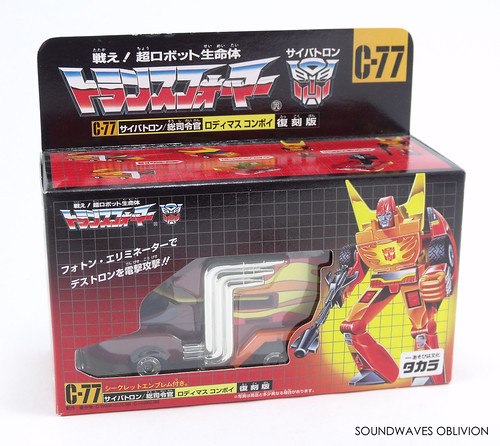 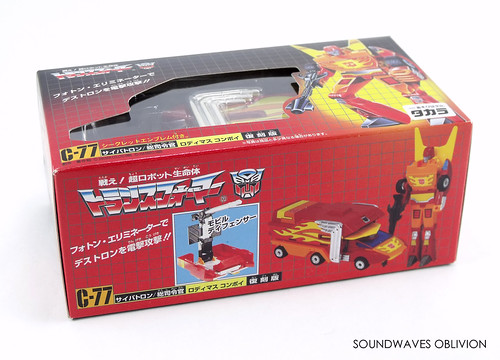 C-77 Rodimus Convoy was originally released in Japan in November 1986 months before C-78 Hot Rodimus, who due to delays, was released in April 1987. The version released in Japan was identical to the second production run released by Hasbro which had the plastic tyres and plastic robot feet. For this reissue, Takara chose to release the rubber tyre and diecast feet version. Like many of the early reissues the boxes were near identical to the originals but the reissues had updated logos the toy was packaged in a clear plastic tray instead of polystyrene. 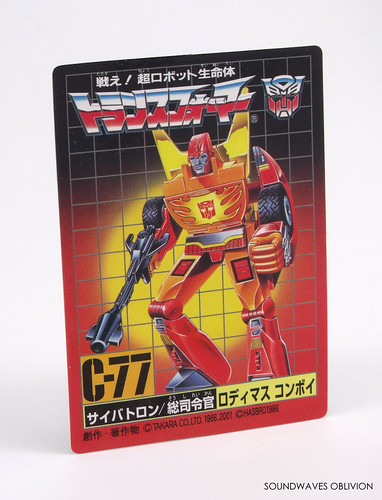 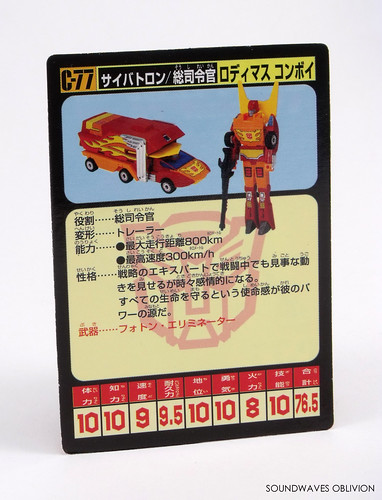 Rodimus Convoy is packaged in vehicle mode which can really only be described as a futuristic cross between an early 1980's Winnebego and a GM Bison concept. The flame decals from the bonnet are now emblazoned on the side of the vehicle alone with the chromed pipework.
Like Convoy / Optimus Prime, the "cab" can separate from the trailer although the "cab" mode is probably not mean to be its own vehicle like Optimus. The trailer can open up and inside is a cannon which you raise up and attach two blast shields to it. Its functionality is rather limited compared with Optimus Prime's trailer and from memory the trailer doesn't serve a purpose as a battle station either. 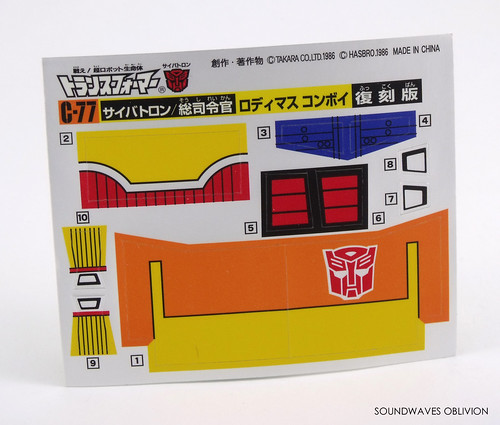 Transformation for the front half of the vehicle to robot mode is very simple and the robot mode is rather striking. Articulation is just limited to the arm rotation at the shoulders which is part of the transformation. The legs do look as if they bend at the knee but unfortunately they don't. The robot mode can also stand inside the battle station or it can hold the long Photon Eliminator rifle. 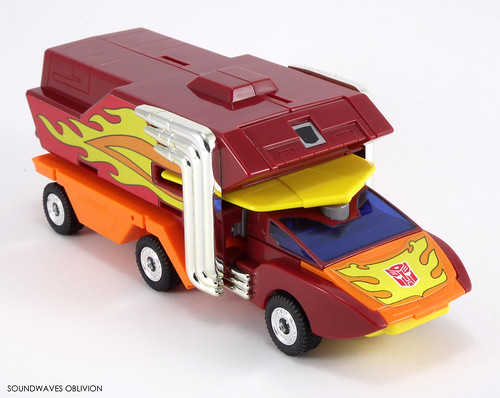 Rodimus Convoy is certainly a product of its time and we did receive several updates, the best of which were the 2011 MP-9 Rodimus Convoy which was innovative yet problematic and the most recent Transformers Kingdom Commander Class Rodimus Prime.

Both Rodimus Convoy and Hot Rodimus were designed by Floro Dery for the upcoming "Transformers The Movie" in 1985 and were simplified by Toei Animation. Takara used the early designs when they were developing the toys in 1985. Initially both Hot Rodimus and Rodimus Convoy were developed by separate designers and both prototypes were much larger than the final product. In the middle of production Hasbro requested that the scale be altered for both figures so Takashi Kunihiro who had worked on Rodimus Convoy had to start from scratch with both toys.
Interestingly, the Studio Series 86 Hot Rod and Kingdom Rodimus Prime feature an arm switch around as part of the transformation, the very first prototype featured this as part of its transformation as well.
The first transformable prototype for Rodimus Convoy was discovered in Takara Tomy's warehouse in 2011, unfortunately the Hot Rodimus prototype remains lost although Takashi Kunihiro said he was not a fan of that particular version. 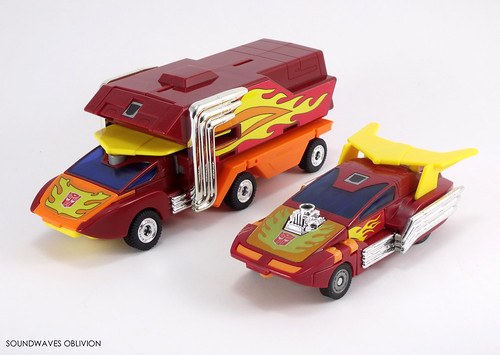 The change to make Rodimus Convoy a smaller figure is a strange one as he is supposed to be the new Autobot Leader against Galvatron the new Decepticon Leader, at least this was how it was portrayed in the movie and cartoon series. With the toys Rodimus Prime comes up to Galvatron's waist, the prototype as well wan't as tall as Galvatron. Maybe the toys were mistakenly or purposely using a different storyline? At least with Hasbro's toys this seems to have been the case. Or quite possibly Hasbro were working to an early draft of the script? 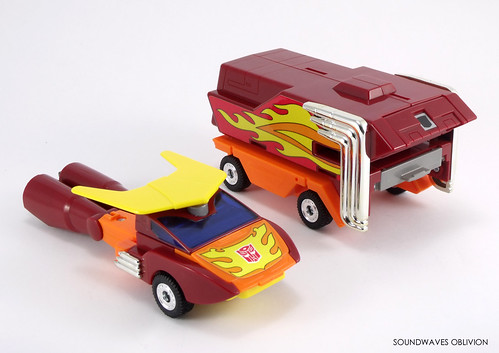 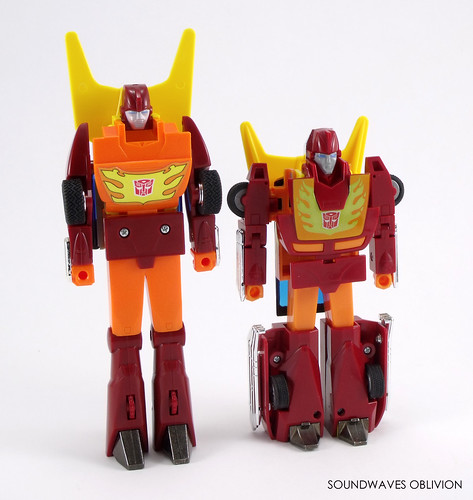 The UK Marvel comics and toy catalogue even explicitly state that Galvatron and Ultra Magnus are the new leaders. This may have been a strategy to push the bigger figures for more sales at the higher price points?

Takara on the other hand followed on from the cartoon and the Rodimus Convoy toy is the Cybertron General Commander. Galvatron's function is still City Commander but the tech spec states he is the new Destron Commander. 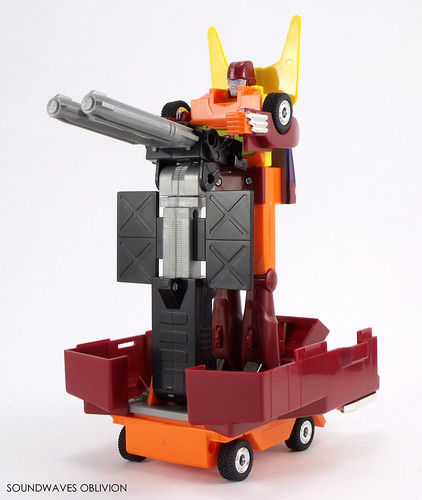