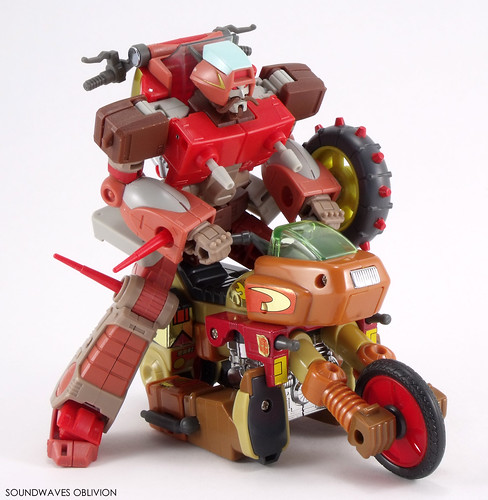 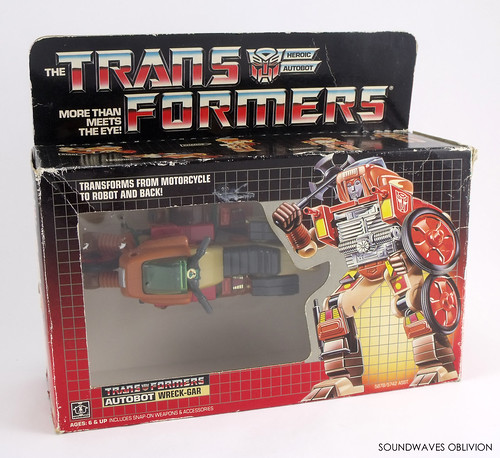 Wreck-Gar was designed by Floro Dery and the initial concept art is almost identical to the final version seen in the film.
Wreck-Gar was encountered on the planet Junkion, a planet of junk as its name suggests, and he is the leader of the Junkions who are Transformers made of spare parts and junk who transform into motorcycles. Although we saw many Junkions, Wreck-Gar was the only one released in the toy line.
Wreck-Gar's initial toy mock up not only featured a very different colour scheme but also a slightly different transformation. The diecast "shoulder" section split in half in motorcycle mode and was pushed together in robot mode. Additionally there is a "waist" section below the chrome chest / engine block in robot mode which slides down. The axe and gun weapons are slightly different to the versions that were eventually released. This particular version of Wreck-Gar was more in keeping with Floro Dery's concept art. 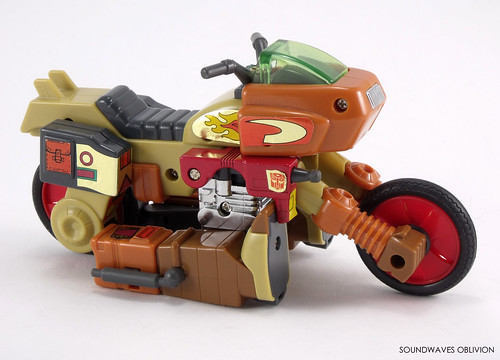 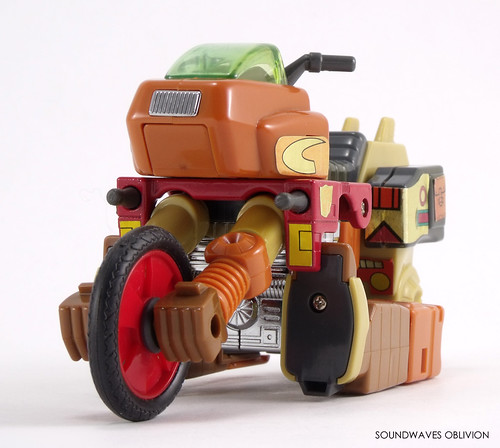 In the 1986 Toy fair brochure for retailers, Wreck-Gar was pictured  but this time in his now familiar colours. The mock up photographed was a repaint of the earlier mock up although it looks like they forgot to paint the face altogether and the windshield has been painted a solid off-white colour. This version has a different gun which is more similar to the version that came with the finished product.
The final retail version of Wreck-Gar was adorned with photographs of the mock up as seen in the Toy Fair magazine however the face seems to be either badly coloured in or a temporary sculpt, and the windshield is now translucent. Either way the face looks rather odd. 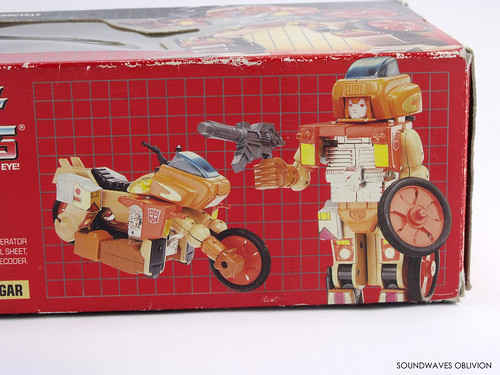 Wreck-Gar's box art is also based on the mock up as you can see the very apparent split in the red shoulder section. Below is the box art I provided to Botchthecrab.com in 2011.


Wreck-Gar is packaged in motorcycle mode which is a futuristic motorcycle which seems to be loosely based on an early 1980's Honda GL 500.


Transformation to robot mode is very early but there is one difficult step which is rotating round the rear wheel to the side of the leg. As this figure ages the rubber tyre is getting weaker and this has very little clearance. 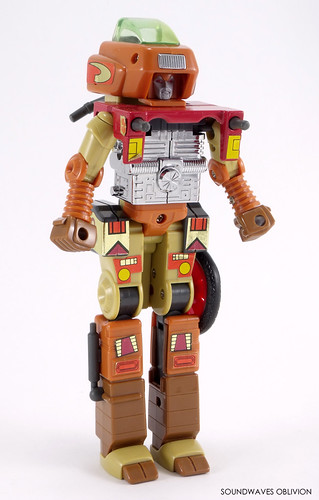 Robot mode is not very posable with the only articulation being the arms. The arms themselves are quite detailed as the forearm is moulded like a coil spring to act as the motorcycle modes front suspension. Unfortunately the face sculpt is rather bland and doesn't even feature Wreck-Gar's signature facial hair. 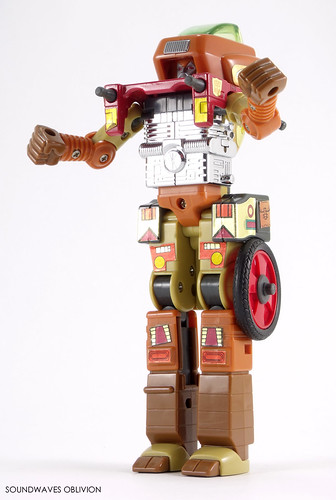 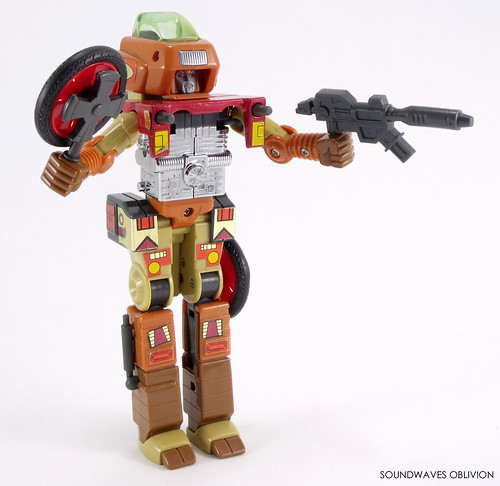 Wreck-Gar can hold his front wheel as a shield and the wheel can even plug into the hole in the centre of the axe. I'm not sure whether this was supposed to be a feature but it fits very well. 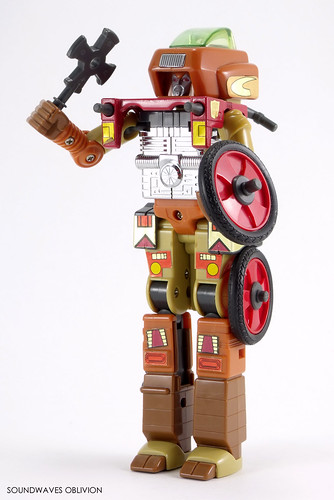 It would be 24 years until Wreck-Gar received another toy which was released in the Reveal The Shield series. In 2021 Wreck-Gar finally received a new toy based on his appearance in the 1986 movie in the Studio Series 86 toyline. 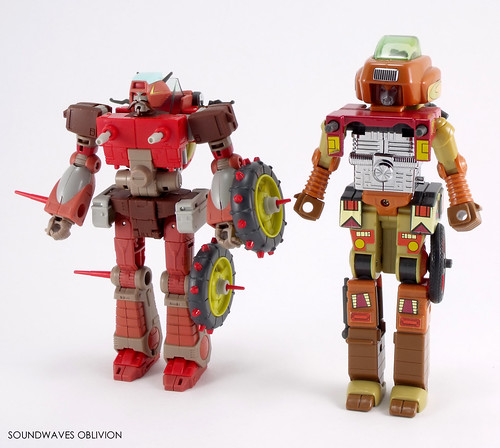 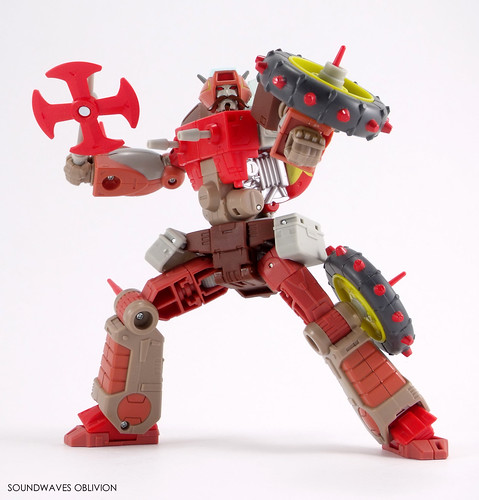 Wreck-Gar is packaged in robot mode and looks like he has walked out of the television. Wreck-Gar has a fantastic range of articulation, even the chest guns are articulated. The head doesn't have the greatest range of motion due to the beard. The spikes are a harder plastic than I thought they would be but the ends aren't sharp at all. The two wheels slide over the spikes and fit in place, you just need to be careful removing the wheels in case the spikes are knocked. Wreck-Gar also comes with his axe which can fit on his back when not in use. 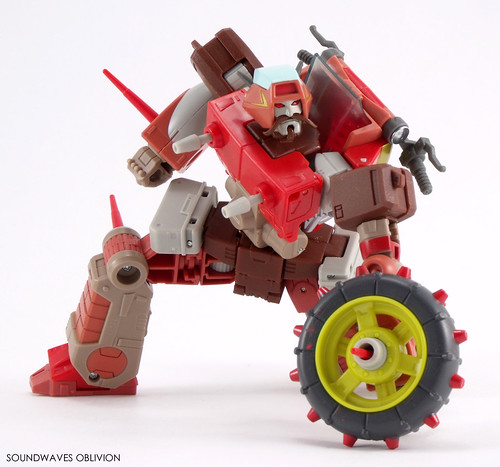 Transformation is very simple but effective. The only scary part is pulling out the translucent plastic windscreen which is clipped in very tightly. The back of the robot head is detailed with the motorcycle speedometer dashboard which is a nice touch. There are also 2 kickstands on the underside of the legs which keep the motorcycle mode upright. The axe weapon can also plug into the rear of the motorcycle. 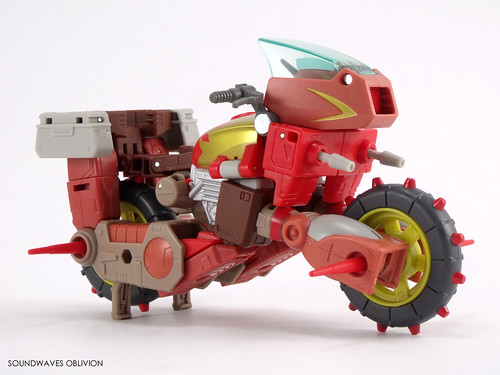 Overall this version of Wreck-Gar is certainly one to pick up. 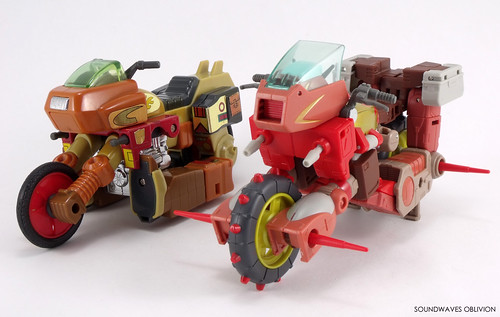 Email ThisBlogThis!Share to TwitterShare to FacebookShare to Pinterest
Labels: Generation One, Studio Series