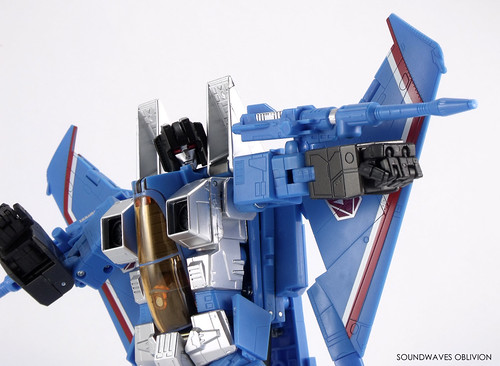 Profile (Translated from the Character Card)
MP-11T Destron Aerial Warrior Thundercracker
Function: Aerial Warrior
Motto: “The deadliest weapon is fear.”
Profile:
Thundercracker despises anyone on the ground who can't fly. Originally he did not approve of the Destron cause. Thundercracker possesses a unique ability allowing him to generate a vibration wave deafening his opponents audio receptors. He comes equipped with heat resistant ceramic bullets filled with highly explosive material which ignite on impact and a shoulder mounted incendiary gun which can fire one hundred rounds per minute.
STR...7; INT...4; SPD...8; END...7; RNK...5; CRG...8; FBL...7; SKL...7 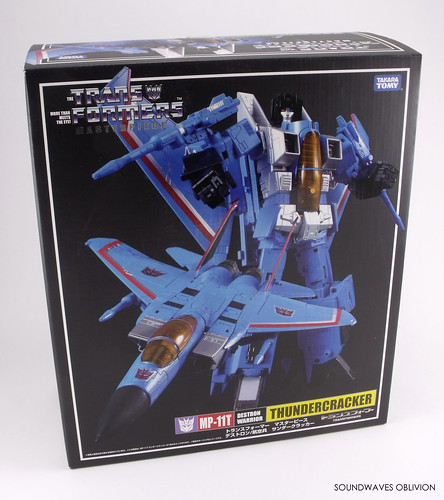 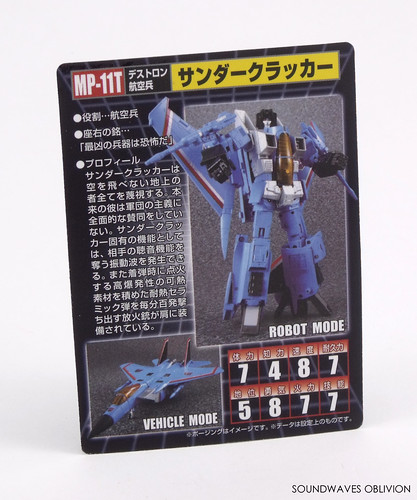 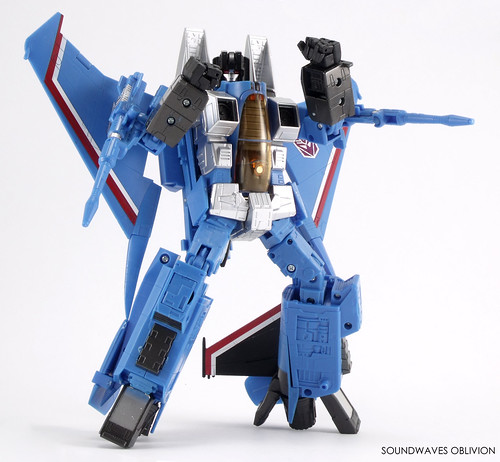 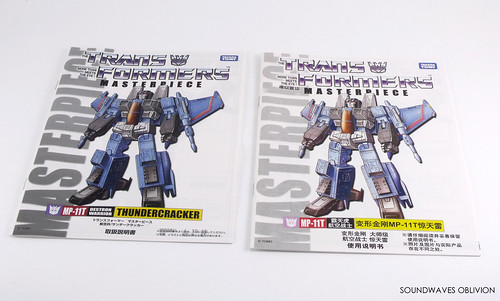 Thundercracker comes packaged in robot mode and comes with minimal accessories which just include a hologram pilot. The joints on Thundercracker are incredibly tight, especially the legs which feel like they are going to snap when you bend the knees. My version features an irritating QC issue where the left wing falls off when you pick the figure up. This can just be clipped back in but its not an issue I have with any of the other MP-11 Seekers. Another observation over the wings is that there is no Destron insignia on the rear of the wings as there are with Starscream and Skywarp. The elbow pistons on my copy are not chromed unlike Starscream and Skywarp but I'm not sure if that is just with my copy of the figure. 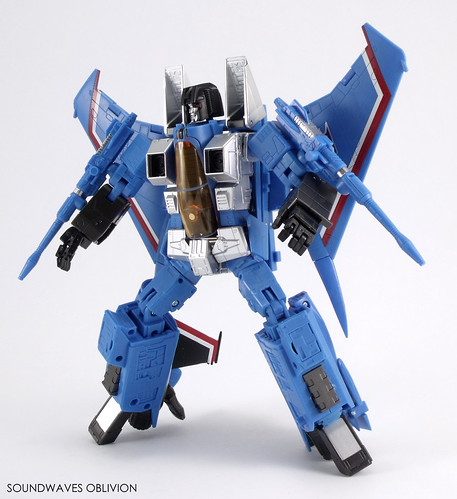 The overall robot mode looks great and is an improvement over MP-7, especially with the lighter colours however when compared to the upcoming MP-52+ Thundercracker, this figure certainly shows its age. 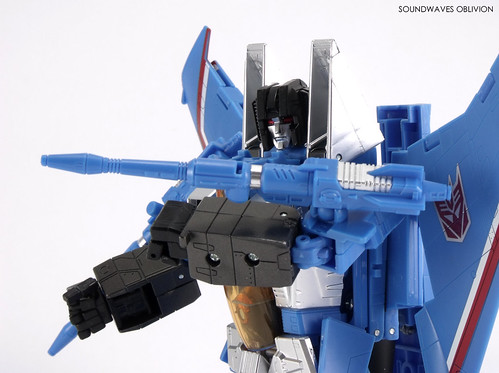 The MP-3 / 11 Seekers are some of the only figures I can transform without referring to the instruction manual. This is harder to do with the more recent releases which are far more complex and rather more fragile. The only issue I had with Thundercracker again is the tightness of the joints. I purchased Thundercracker in 2015 but I only opened the box this year (6 years later). 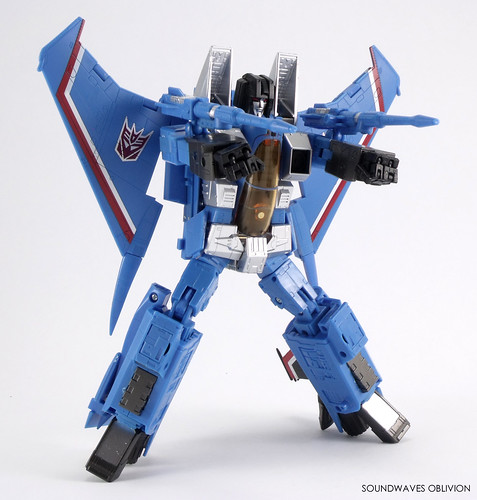 The only QC issue I encountered here is the section with the air brake which holds the wings in place. This plugs into a silver peg on the rear of the robots waist. This took a lot of force and in hindsight I should have sanded down the hole. Because I forced it, the hole is covered in stress marks. Luckily the plastic is thick and the underside of the back section is a separate piece to the top section so the stress marks have not appeared on the top of the jet mode. 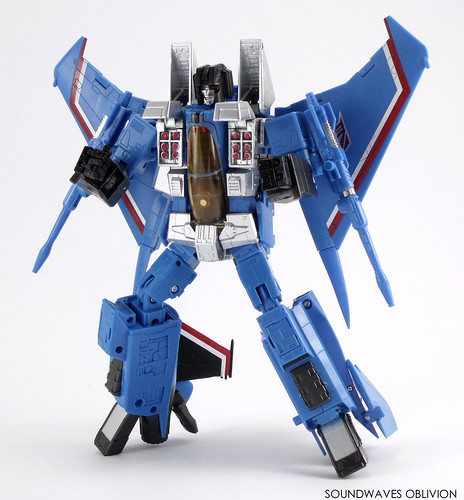 The jet mode is where the MP-11 figures shine. When MP-3 was developed the aim was to have a realistic jet mode with very little of the robot mode visible and it achieved that. MP-11 is based on the initial MP-3 design but with the alterations the side of the jet and the underside is not as clean as MP-3 but with the improved robot mode it is easy to overlook. 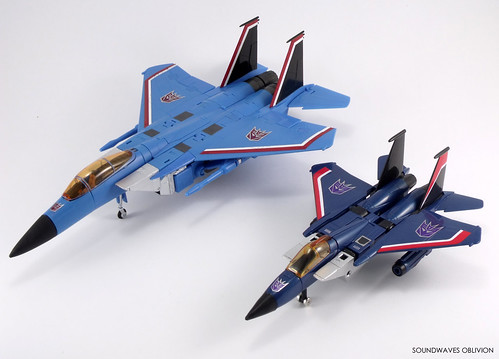 Despite the price of this figure it did not come with a display stand unlike Hasbro's equivalent which was released earlier in 2012. However it is compatible with the MP-3 stand. 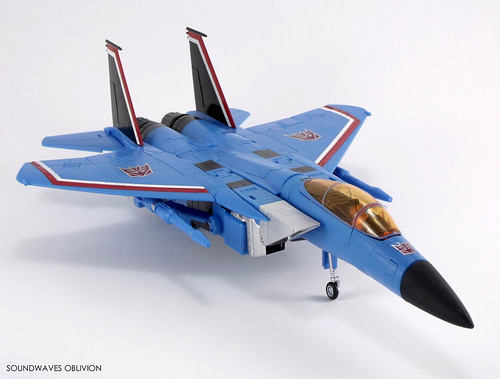 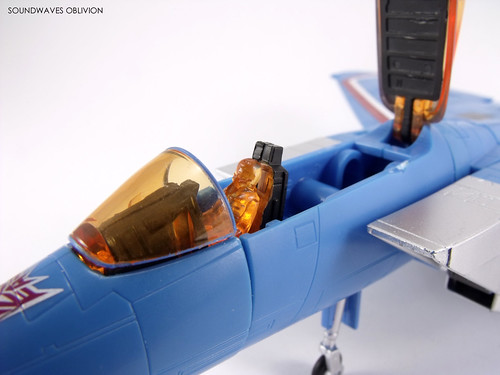 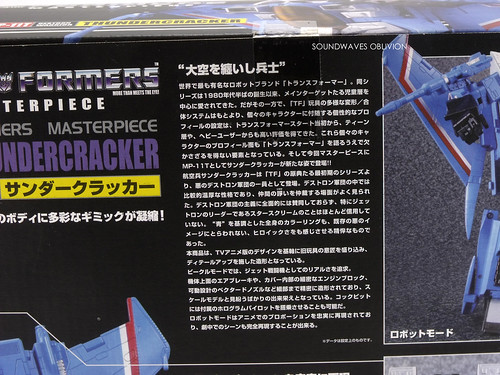 “The warrior who wears the skies” (Translated from the back of the box)
“Transformers” are the world's most famous brand of robots. Since the mid 80’s it has been beloved by many children who were the main demographic. However, the various transformations and combination systems of the toys, combined with their unique profiles accompanying each character, earned high praise from teens and enthusiasts since the Transformers debuted. When talking about Transformers, their profiles are an essential element. And now Thundercracker MP-11T has appeared with an updated appearance in the Masterpiece series!!
The Aerial Warrior Thundercracker debuted as a member of the Destrons in the first Transformers series. Out of all the Destrons he was relatively mild mannered and was often caught in the middle of disputes between his comrades. He doesn’t completely accept the Destron cause and has little faith in the leader of the Jetrons, Starscream. His “blue” body allows him to feel heroic and fearless without being bound to an evil depiction.
This is an improved model, based on the design from the cartoon version which also incorporates elements from the original toy. In vehicle mode he is a realistic jet fighter; air brakes are on top of the fuselage, a detailed engine block under its cover and details such as movable vectored nozzles are fully realised. The end result is just like a scale model. You can also seat the hologram pilot inside the cockpit. The robot mode fully replicates his appearance in the cartoon. You can now recreate scenes from the cartoon.
Posted by Jeremy Barlow at 10:26