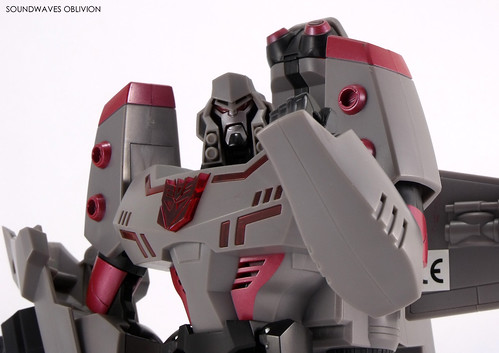 Megatron
Function: Ultimate Intergalactic Tyrant
Motto: "Crush the Autobots."
Now that he has finally been able to build a body for himself, Megatron is more powerful than ever, and no force on Earth can stand against him. He is a fighter without equal anywhere in the universe. Backed up by his Decepticon soldiers, he is also an expert battle leader, without peer. He is as ruthless as he is ambitious. Megatron will stop at nothing to gain the Allspark, and destroy Optimus Prime and his Autobots. 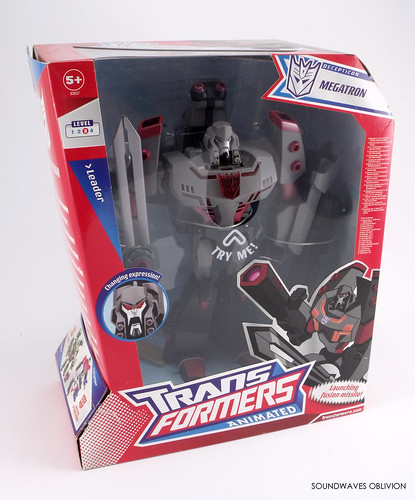 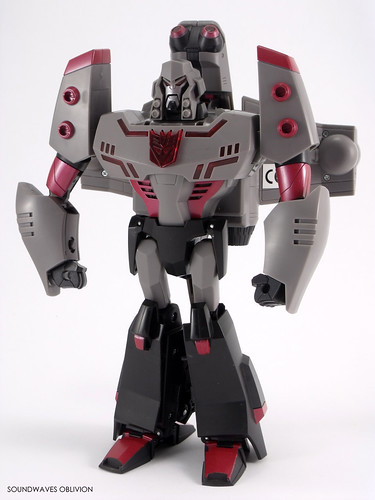 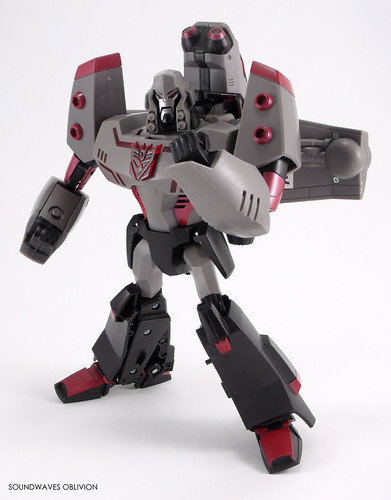 Megatron's first appearance in Transformers Animated featured a design based on a simplified version of the 2007 live action Megatron. This version was released as two toys, a Deluxe Class figure and a Voyager Class figure, both of which were not exactly good figures. However this is a different story with the Leader Class figure. 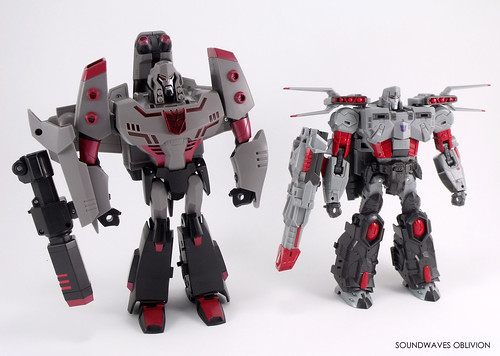 Animated Leader Class Megatron came out at retail around July 2008 but it was also available from April 2008. Packaged in robot mode, Megatron is a large figure and very show accurate. The robot mode design looks great and is heavily based both on G1 Megatron but also Super Megatron who at this point had only appeared in the Manga for the 1991 Transformers Battlestars. 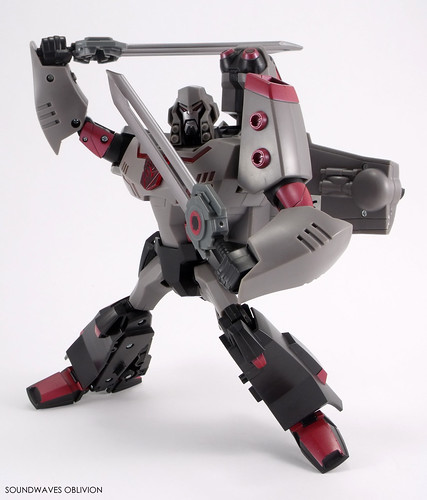 Megatron has decent articulation for an Animated figure and even has a waist swivel (albeit rather limited) and an ankle pivot. The robot head can also turn but this is limited due to the sound effect gimmick. Despite the articulation, Megatron can't pull off great poses due to the ratcheted hips. When you press the translucent red Decepticon symbol on the chest, Megatron will speak one of three phrases as well as triggering light up effects:-
"Where is the AllSpark?"
"Crush the Autobots."
"Where is the AllSpark?" 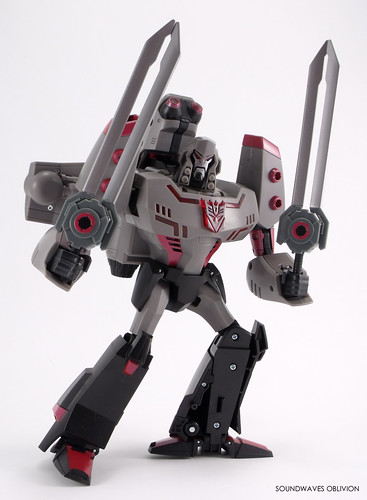 Megatron's toy is voiced by Corey Burton who played Megatron in the cartoon which is a nice touch. Megatrons Fusion Cannon can attach to either arm and can fire a translucent red missile. In order to fire the missile you need to pull back the rear cannon section and there is a small button in the middle to fire the missile. The end of the barrel can also be rotated around to make it cartoon accurate. Megatron also comes with two swords which fit in both fists. 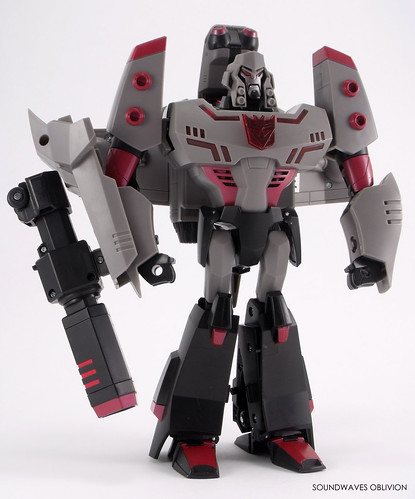 The Headmaster accessory which comes with Leader Class Bulkhead can also fit over Megatrons head and clip in place, although this does not change Megatrons voice clips as it does with Bulkhead. 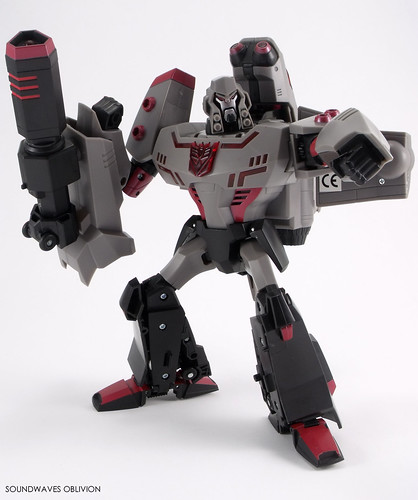 Megatron transforms into an attack helicopter and although the transformation is basic, the legs feature a very clever and involved transformation. Moving the cockpit over the robot head triggers off the classic transformation sound effect. 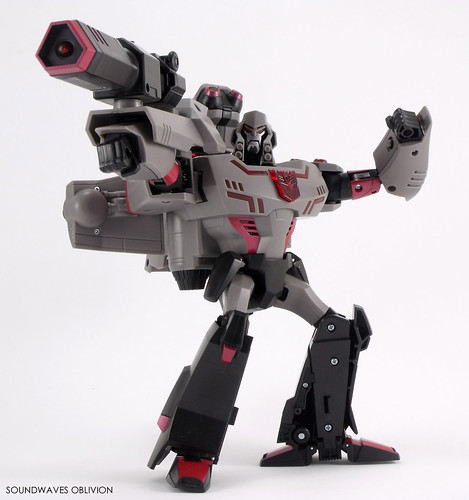 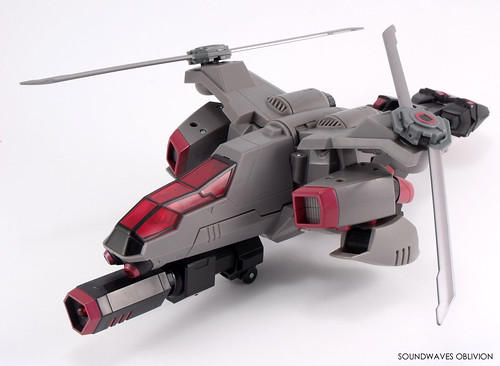 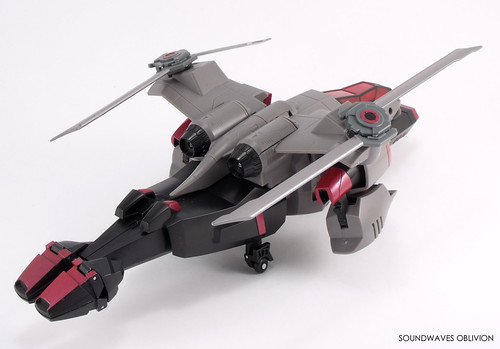 The swords transformed into the rotor blades can be manually spun, and when you spin one blade, the other spins.

Megatron was later repainted as "Shadow Blade Megatron" and apart from the new black and purple colour scheme, it is identical to the original release and features the exact same sound effects.

While Takara Tomy usually favour cartoon accuracy with their Transformers, the took a different direction with their Animated releases. As such the majority of their Animated figures featured metallic colour schemes. As such their version of Leader Class Megatron, TA-26 Megatron, features a very bright metallic silver deco. Just as Hasbro's version, this release also features voice clips from the actor who portrayed Megatron in the cartoon, Norio Wakamoto. The three phrases spoken are:-
"I am Megatron!"
"Megatron, transform!"
"Fusion Cannon!"
Below is a translation of TA-26 Megatron's bio:
TA-26 Decepticon Emperor of Destruction Megatron
“Tremble before my rage!!”
Function: Emperor of Destruction
Transformation: Combat Helicopter
Story
The fearsome Megatron rules over the Decepticons. Only Megatron’s head survived after battling Optimus Prime in his search for the mysterious AllSpark. Finally the time came to regain his body. He also acquired a new alternate mode, a twin-rotor combat helicopter which has given him more destructive power than before. Ultra Magnus, the Autobot’s General Commander, challenges him but the might of Megatron’s new body is too great! Megatron is both powerful and intelligent….he will stop at nothing to gain the AllSpark!
STR...10; INT...10; SPD...10; END...10; RNK...10; CRG...9; FPR...10; SKL...9; TTL...78
Posted by Jeremy Barlow at 11:12