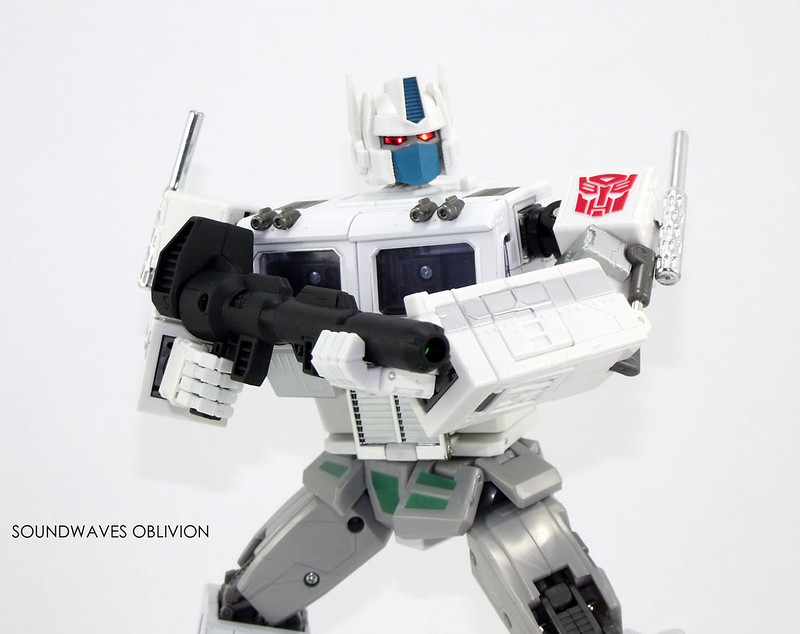 Profile (Translated from the Trading Card)
MP-2 Cybertron City Commander / Ultra Magnus
Function: Cybertron City Commander
Motto: “Consistency is victory.”
Profile:
You can call Ultra Magnus all soldier throughout. Courageous with excellent combat skills and is an inspiration on the battlefield. Ultra Magnus has it all but is most comfortable when carrying out orders given by Commander Convoy. When authority is placed on his shoulders, Ultra Magnus feels burdened by the mantle of leadership.
STR...9; INT...9; SPD...6; END...8; RNK...8; CRG...9; FPR...6; SKL...8 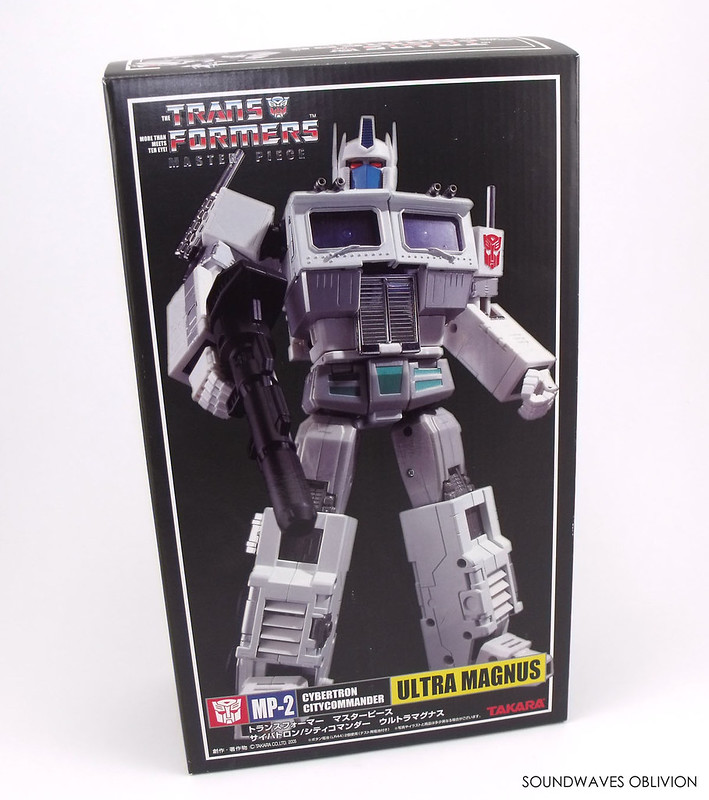 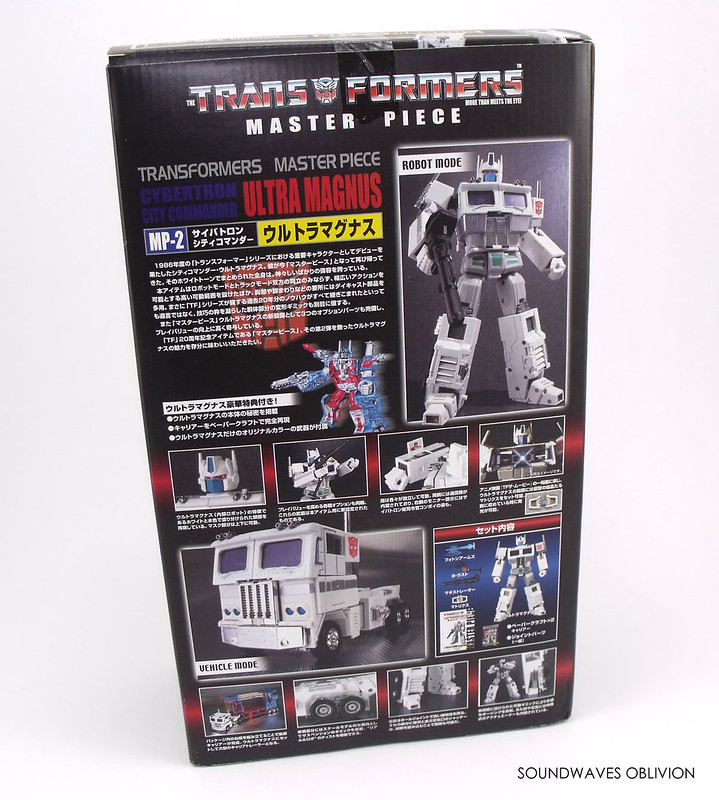 First released in March 2005, MP-2 Ultra Magnus is the first white repaint of Optimus Prime / Convoy since the original 1986 Ultra Magnus. MP-2 Ultra Magnus is a straight repaint of MP-1 Convoy which was released in December 2003 and features all the same accessories as MP-1 albeit in different colours. Target stores in Australia also carried MP-2 Ultra Magnus as an exclusive; this was a straight import of the Japanese release which just had an addition "8+" sticker on the front of the box and an import sticker on the underside of the box.
MP-2 was reissued in 2008 and featured the new Takara Tomy logo on the box; unfortunately this release had a few issues with quality control including poor paint applications and the front lights of the vehicle mode were installed upside down.

Packaged in robot mode, Ultra Magnus is a tall (standing just short of 12 inches, standing taller than MP-22 unless you count MP-22's shoulders) and heavy robot due to the die cast metal in the chest and legs. Just as MP-1 Convoy, Ultra Magnus looks impressive and is quite poseable but due to the weight in the legs the figure is hard to pose and keep its balance at the same time. However the figure has quite a few gimmicks to make up for that. In his overall appearance, MP-2 Ultra Magnus is a cross between the original 1986 version and his appearance in the  Dreamwave comics when he removed his outer armour. 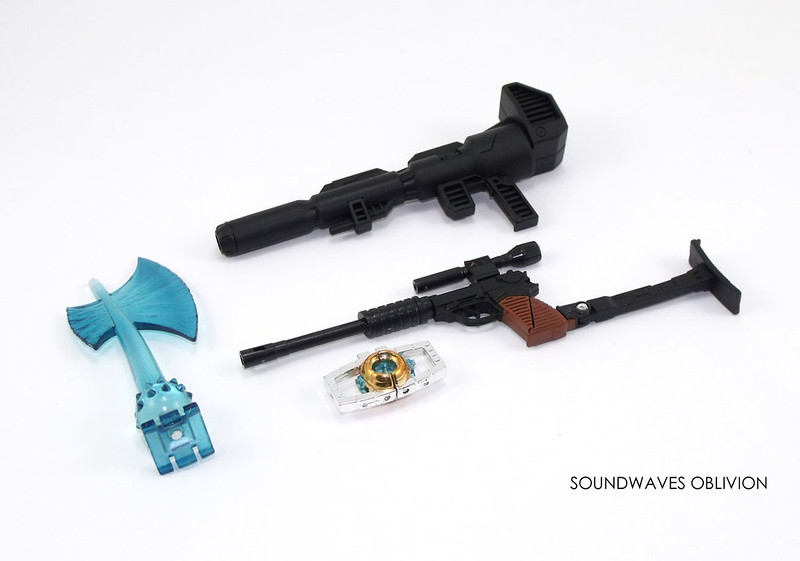 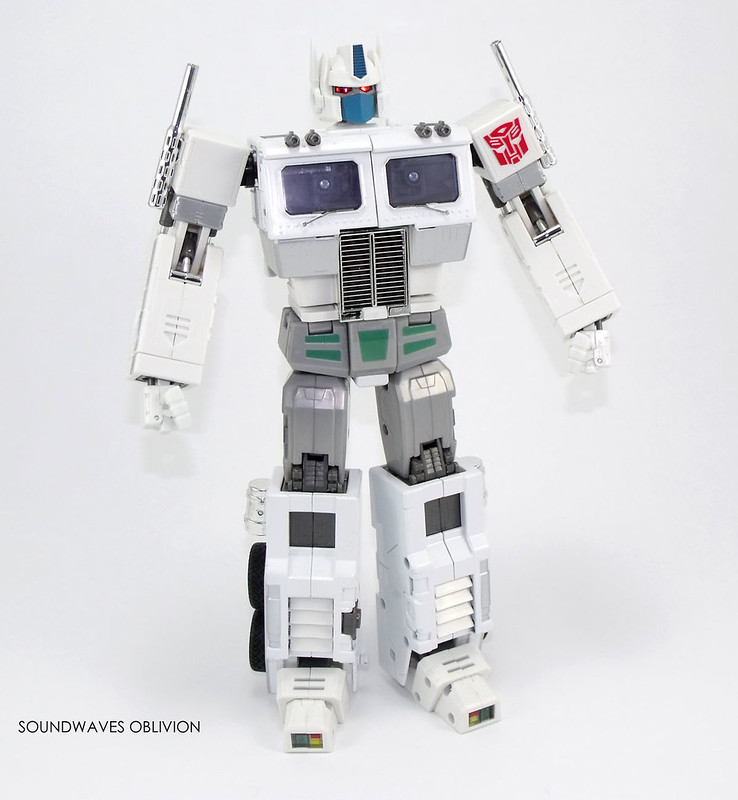 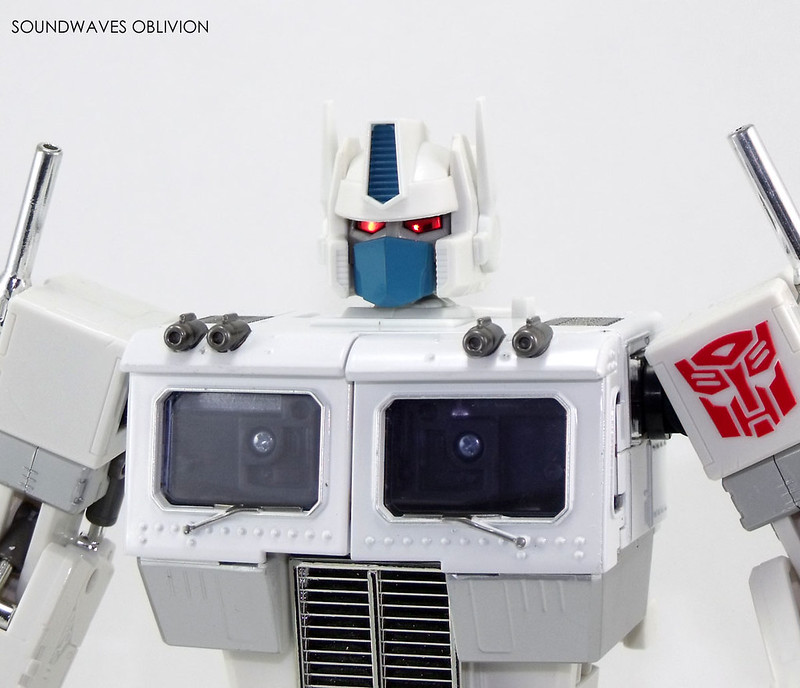 Ultra Magnus is the first Masterpiece Cybertron to have red eyes but not the last with releases like MP-1B Convoy Black ver; MP-8 Grimlock; MP-32 & MP-38 Convoy (Beast Wars) and the upcoming MP-42 Cordon. A feature first introduced with Transformers Armada Optimus Prime, carries across to both MP-1 and MP-1 which is the movable mouth plate when you press a button on the back of Ultra Magnus' head to simulate his talking. 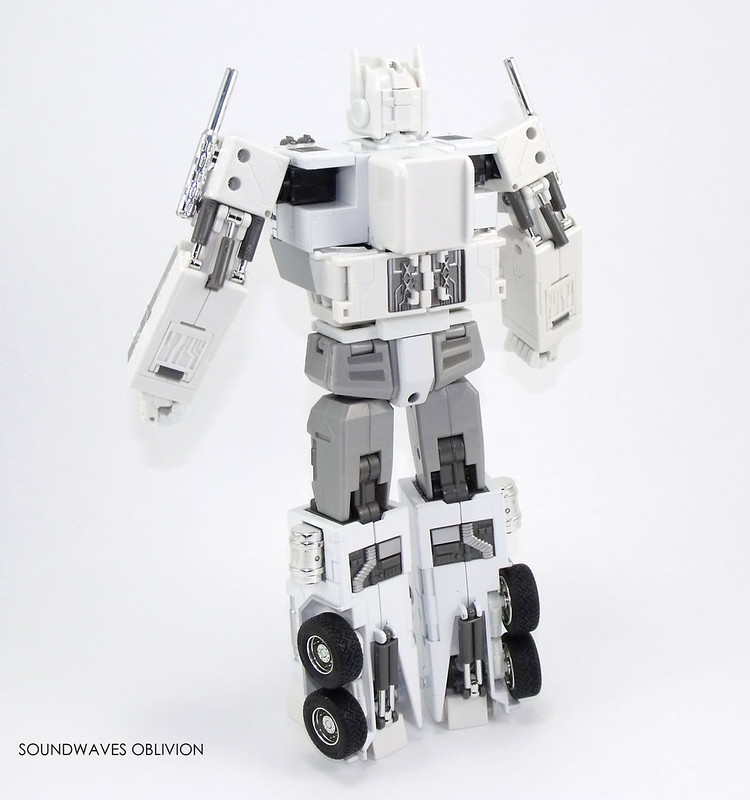 Ultra Magnus' torso is a stand out feature of this particular mould with the transformation of the front wheels which hide inside the main body. The chest also opens up with the windows opening outwards and the grey panel underneath raises to reveal the Matrix of Leadership, a feature based its first appearance in the 1986 Transformers animated movie. There is also a button on Ultra Magnus' shoulder which when pressed will light up the Matrix. The Matrix itself can be removed and opened outwards to reveal the inner blue translucent crystal. The Matrix is made out of plastic unlike the later versions released in the Masterpiece line which have been die cast metal. 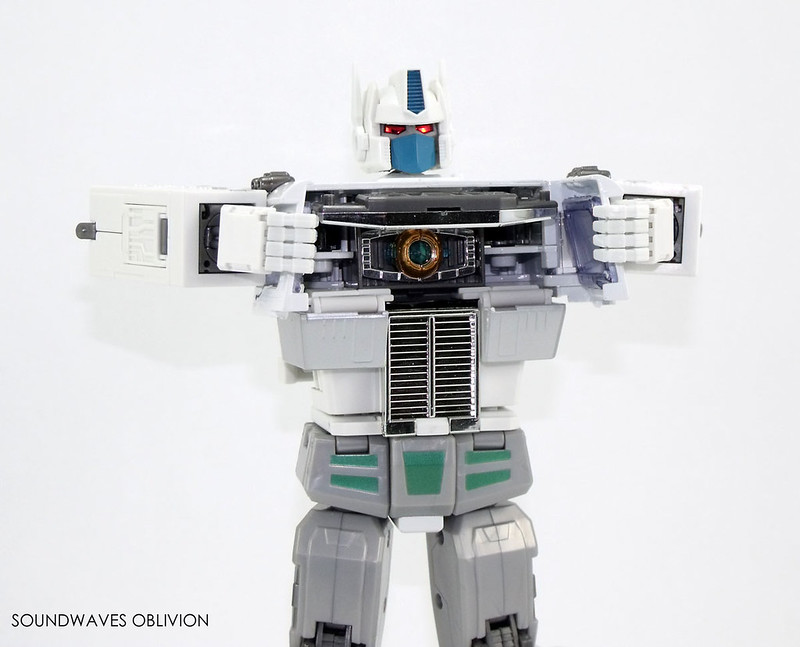 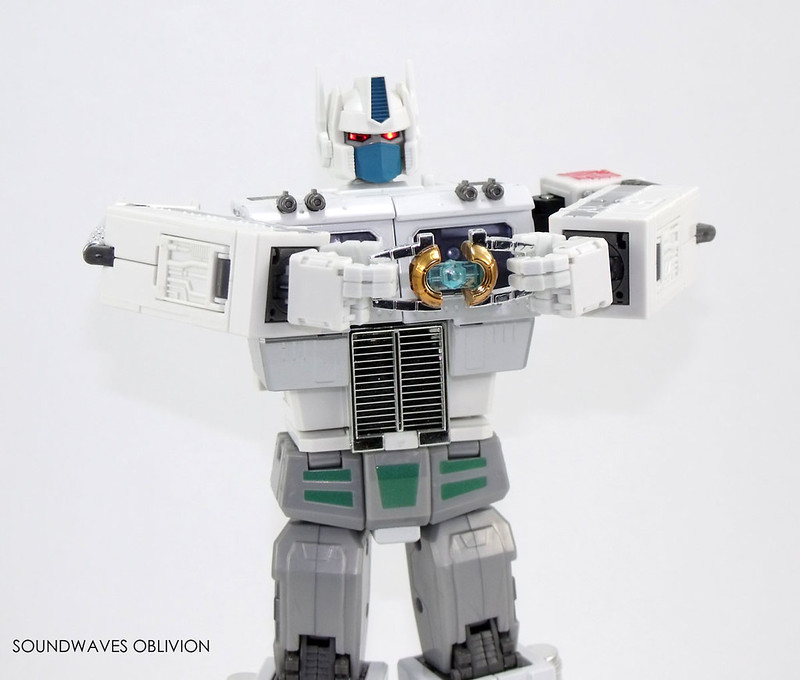 The elbows feature working pistons and the robot hands have individually articulated fingers and thumbs which is quite rare for Transformer figures nowadays. Each forearm has a fold up communicator, on his right arm, Ultra Magnus can communicate with Convoy, on his left there is an image of a wave graph readout. 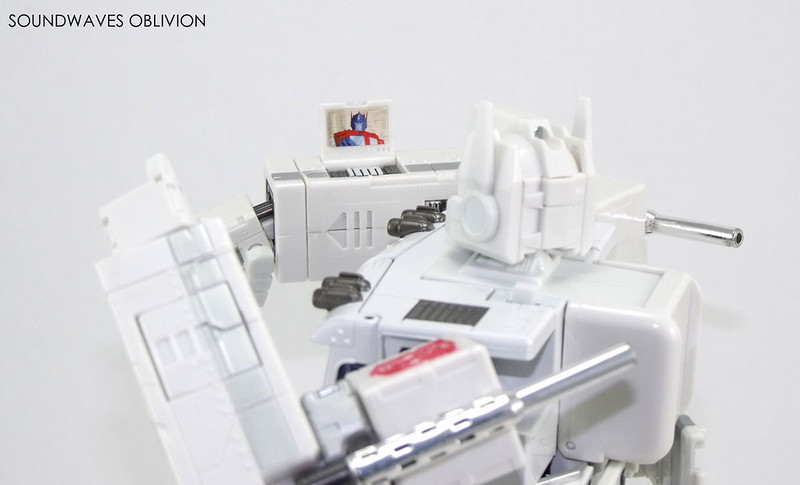 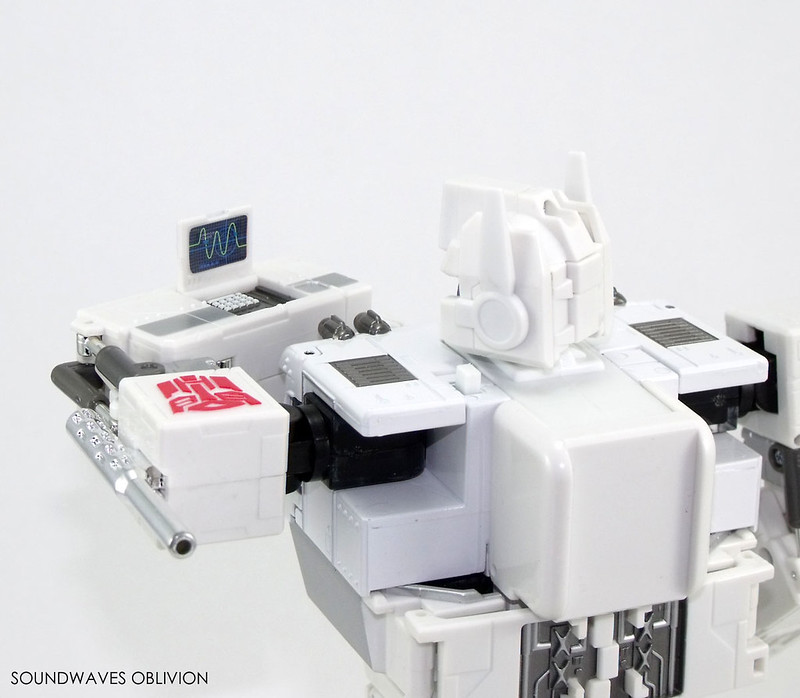 The waist and upper legs are cast in grey plastic, the lower legs are made of die cast metal and painted white. The ankles like the elbows feature working pistons  which move when angling the feet. One of the features of he legs is when you press the feet down, the vents on the shins open out. 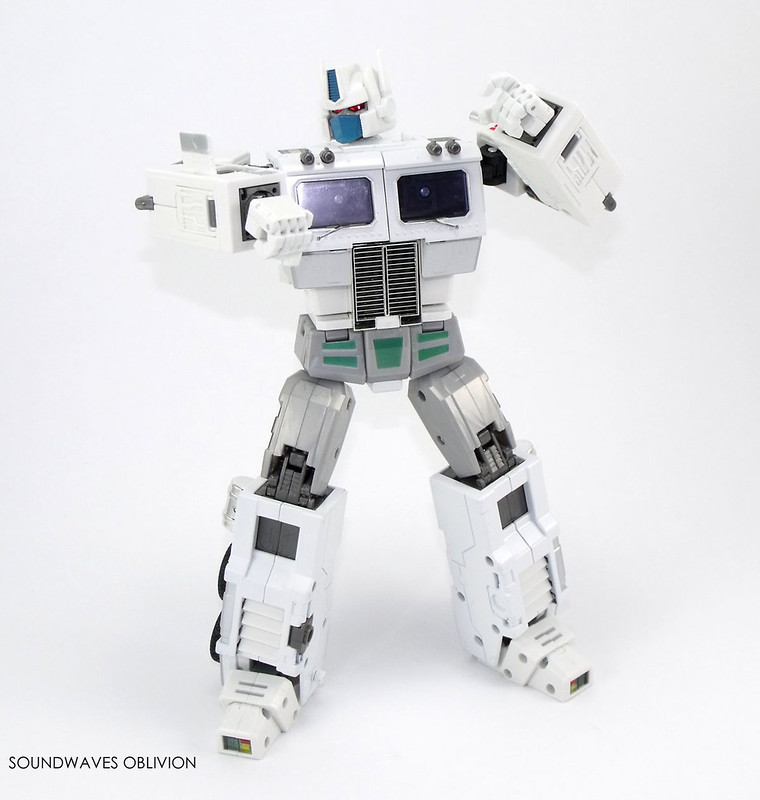 For accessories, Ultra Magnus as mentioned above comes with the same accessories as MP-1 Convoy. The main gun is called the "Magi Striker" and is a black repaint of the grey gun that came with MP-1 Convoy. If you also have the original MP-1 Convoy, you can swap weapons seeing at Convoys gun was always black in the first place. 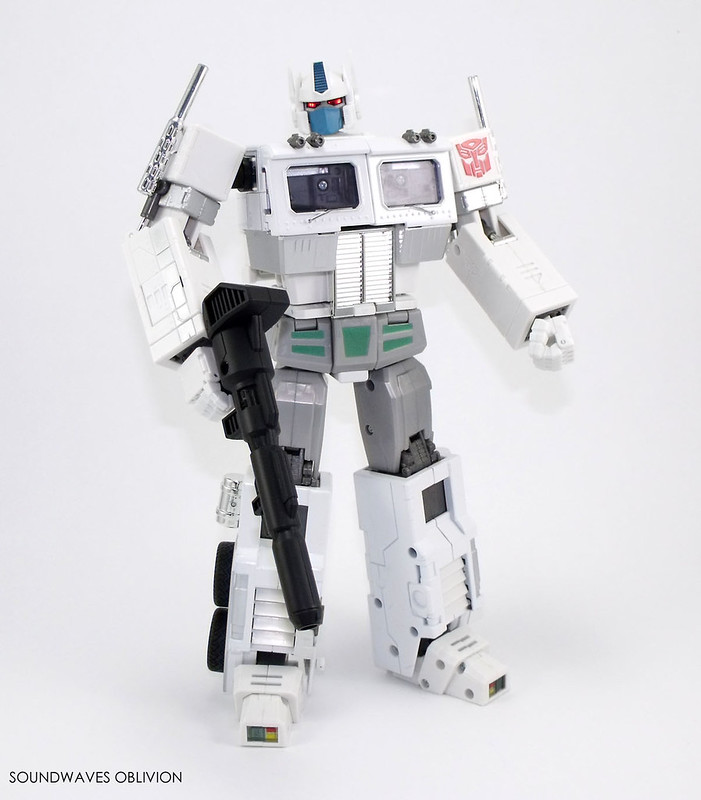 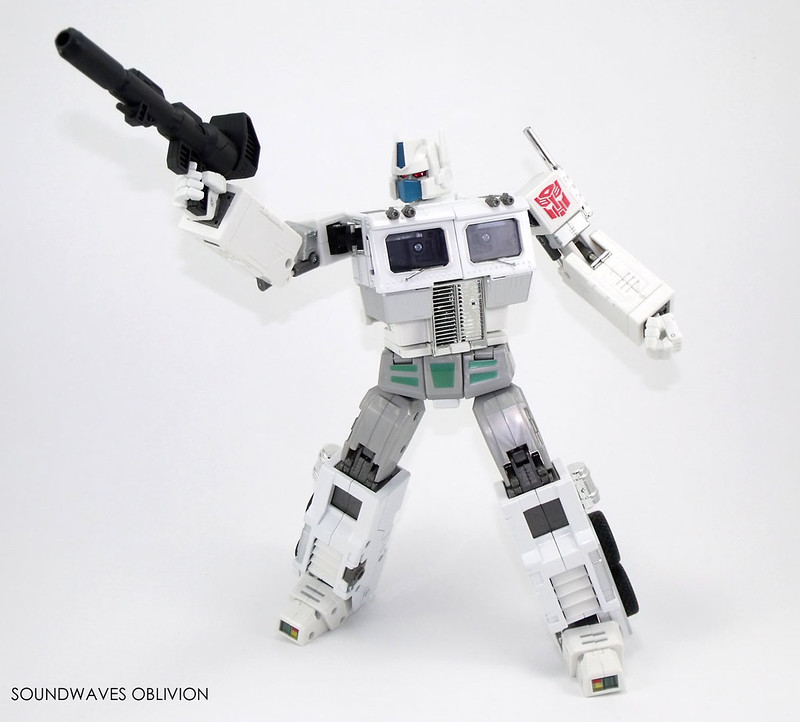 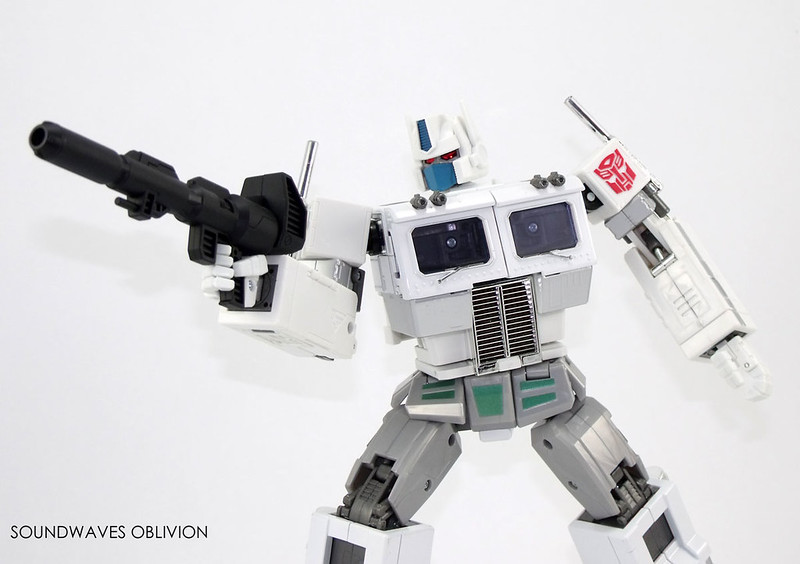 The second gun, the "B-Last" is a repaint of the Megatron gun but this time painted black with a brown grip in the colour scheme of the Micro Change Gun Robo Walther P-38. 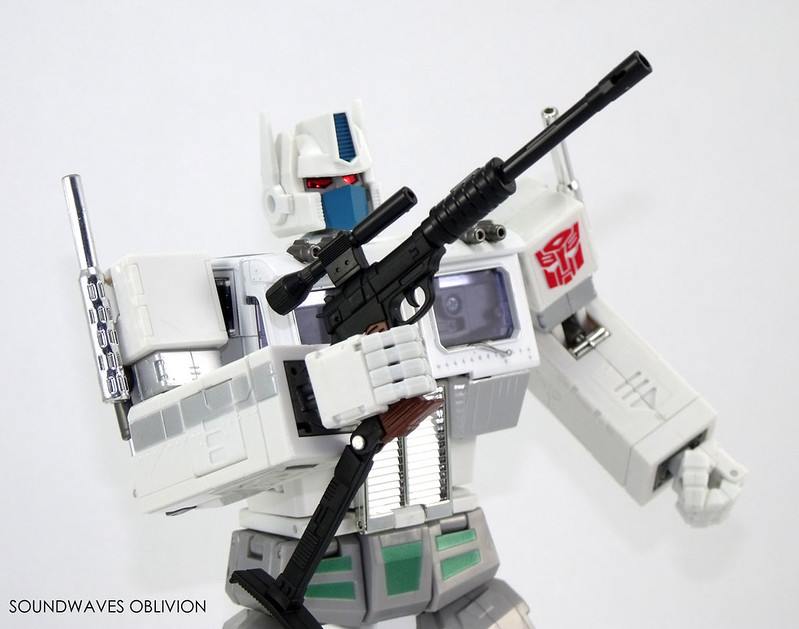 Finally Ultra Magnus has the "Photon Arms" weapon which is a translucent blue repaint of Convoy's orange Energy Axe. In order to fit this, Ultra Magnus hand must be folded into a fist then retracted, the axe can then be clipped in at the end of the arm. 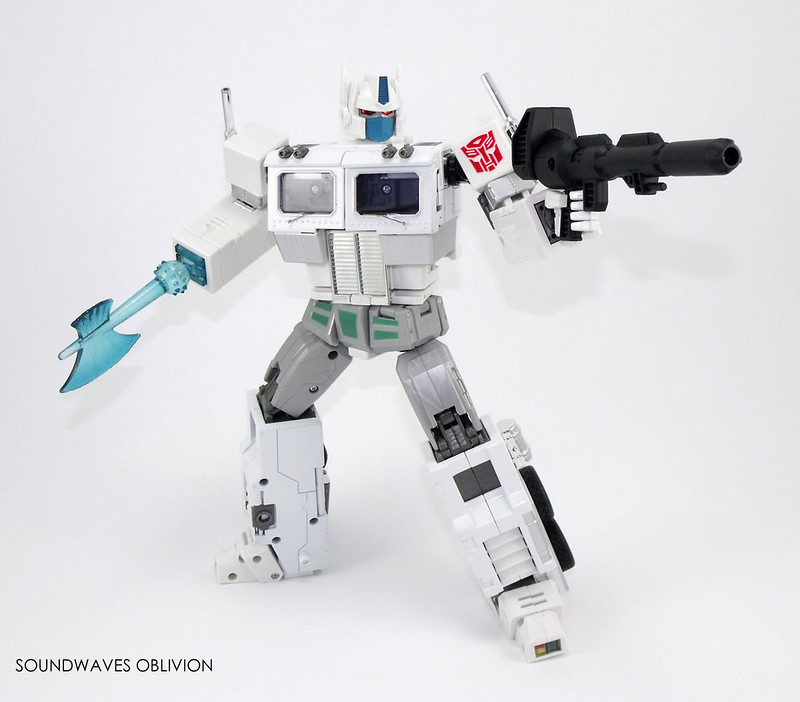 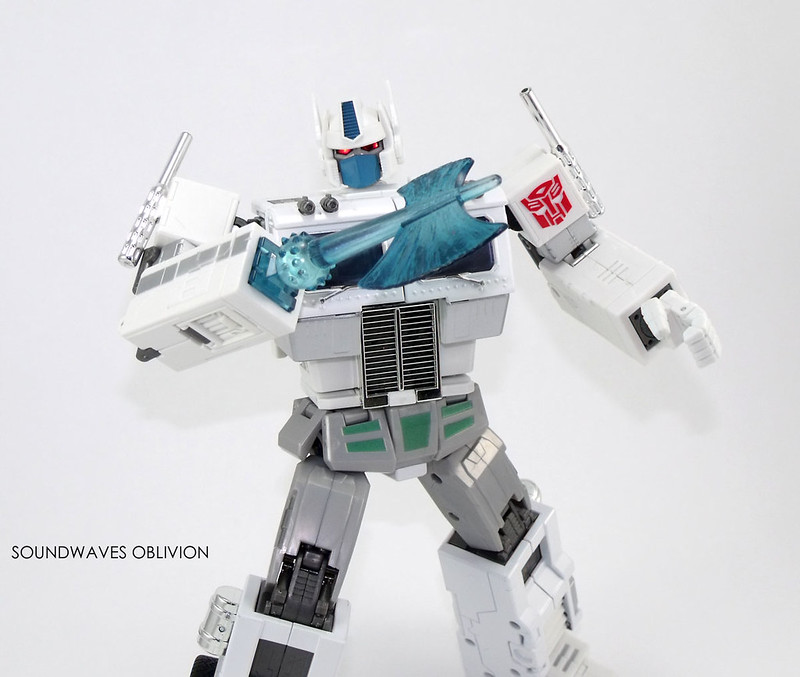 In vehicle mode, Ultra Magnus  is based on a 1979 White Freightliner Cabover Engine Tractor Trailer FLT 9664. Where MP-2 has a successful robot mode, the vehicle mode is not as good with the front grill not sitting flush with the front lights and the gap in the side windows. These are minor nit picks but when comparing the likes of MP-1/MP-2 to the 2011 MP-10 Convoy, you can see which has the more preferable vehicle mode. 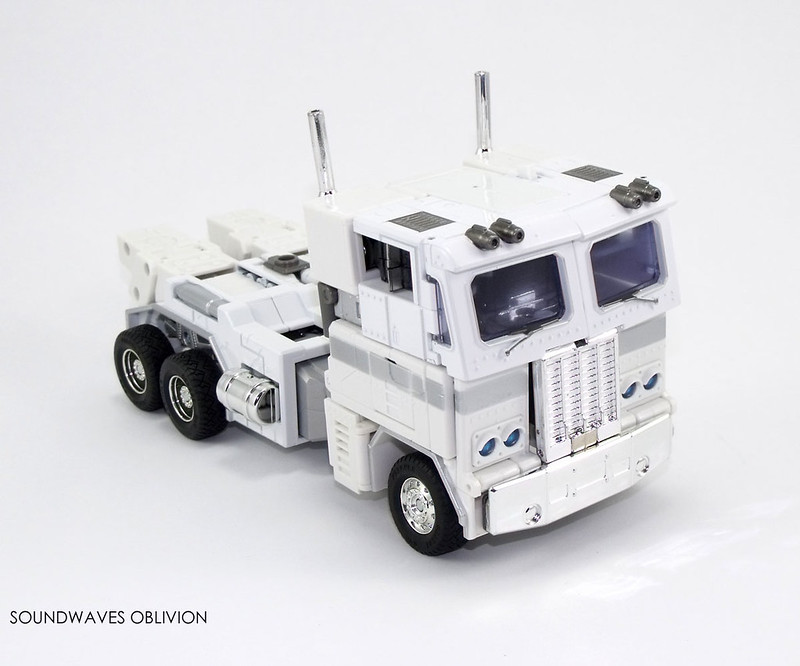 The wheels feature rubber tyres which are branded "Desert Dog Formula" which area real tyre brand which is also stamped on the original Optimus Prime / Ultra Magnus. The tyres also feature working suspension when the vehicle mode is pressed down. 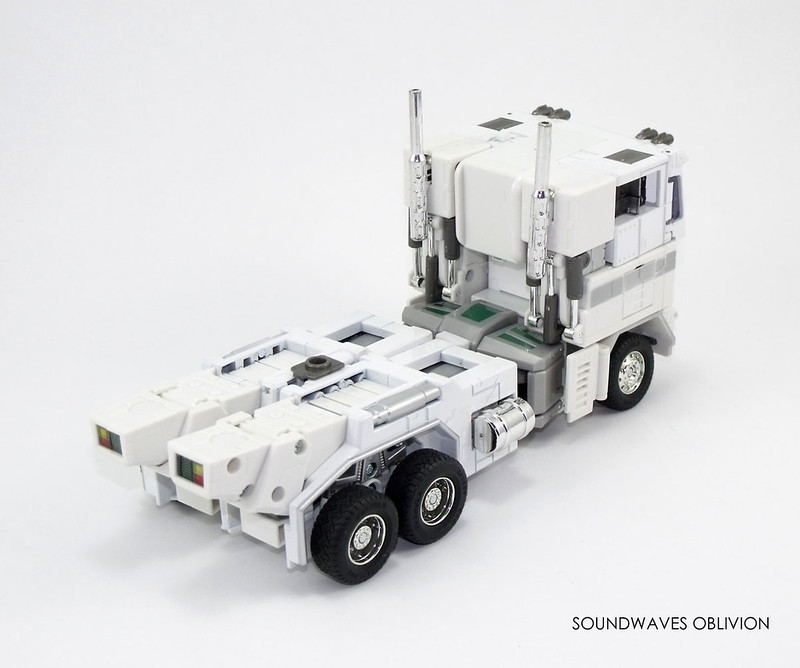 When the windows are opened outwards there is also a little seat inside with Ultra Magnus' antennae almost acting as arm rests. 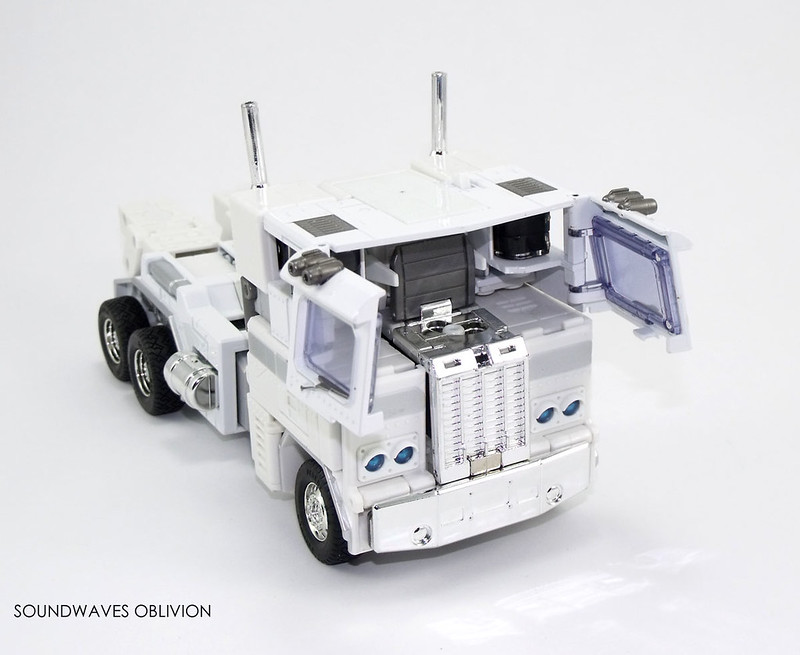 Like MP-1 Convoy, as this did not come with a trailer, the inner cardboard packaging can turn into a replica of Ultra Magnus' car carrier trailer.
Overall this is a very good figure and an exception figure for its time, however if you had to choose one Ultra Magnus for your collection it would easily have to be MP-22 Ultra Magnus. 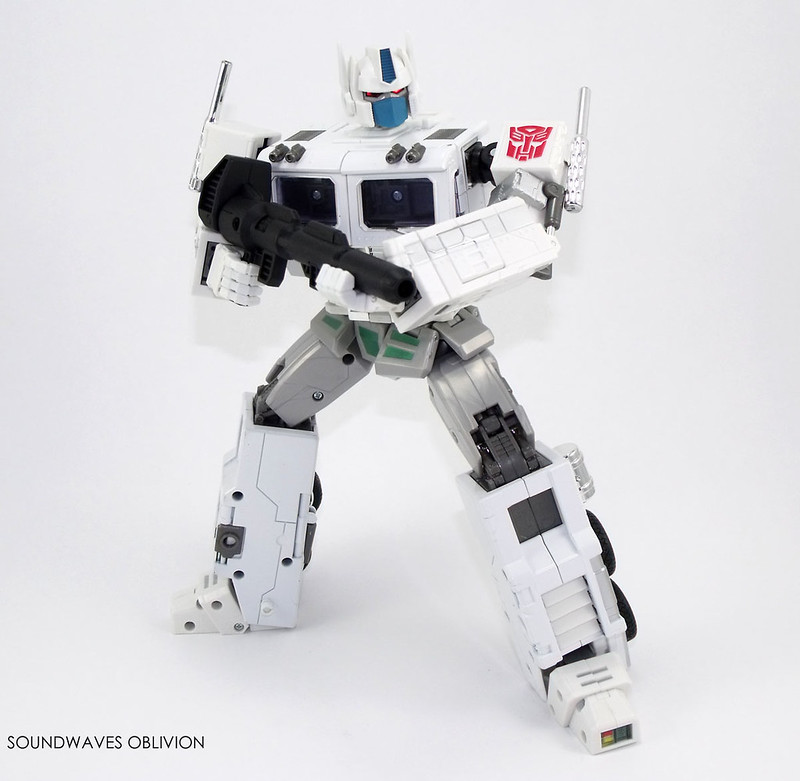