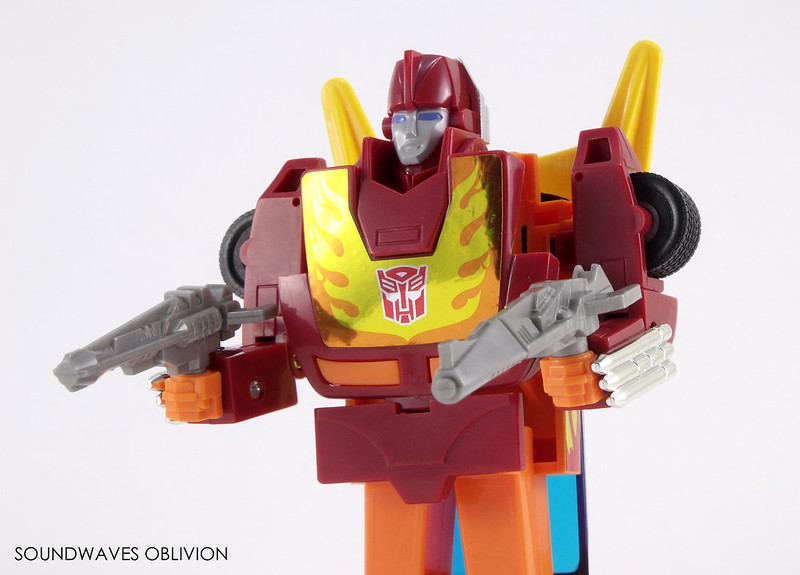 Function: Cavalier
Motto: "My actions speak louder than words."
Hot Rod is an all-American-boy Autobot. He's a typical adolescent who dreams of being heroic and important. He tends to follow to rules too closely. Although he means well, hot rod's impulsive actions often get him into trouble. He carries two photon lasers that temporarily electro-magnatize an enemy robot's microcircuits. Speed 120 mph. Range: 400 miles. He can be hot-headed, but he's always a well-meaning, admirable lad and a brave and honourable fighter.
STR:10; INT:10; SPD:9; END:10; RNK:10; CRG:6.5; FPR:8; SKL:10 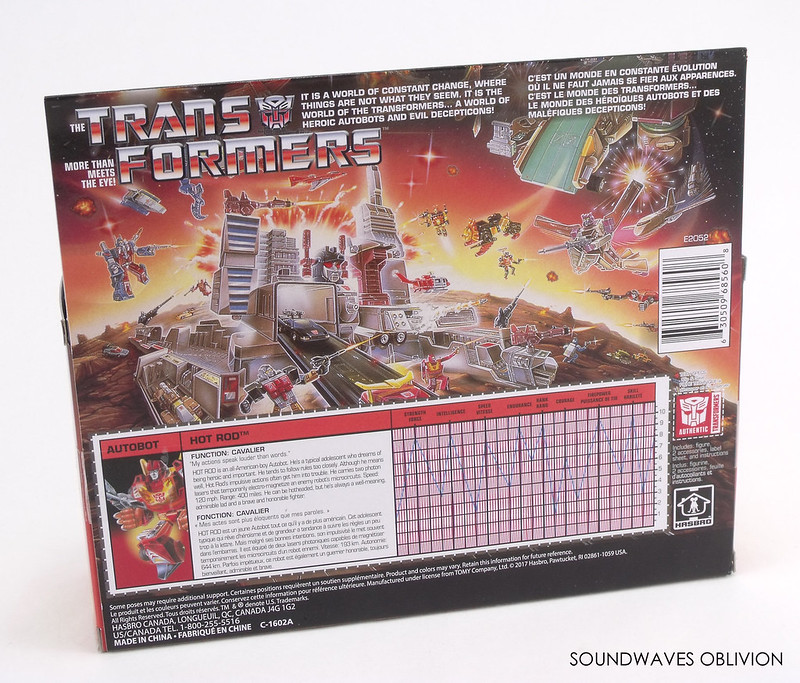 The Hot Rod reissue appears to be the start of a new unexpected range of reissues from Hasbro for 2018, more than likely in preparation for the 35th anniversary of Transformers next year in 2019. 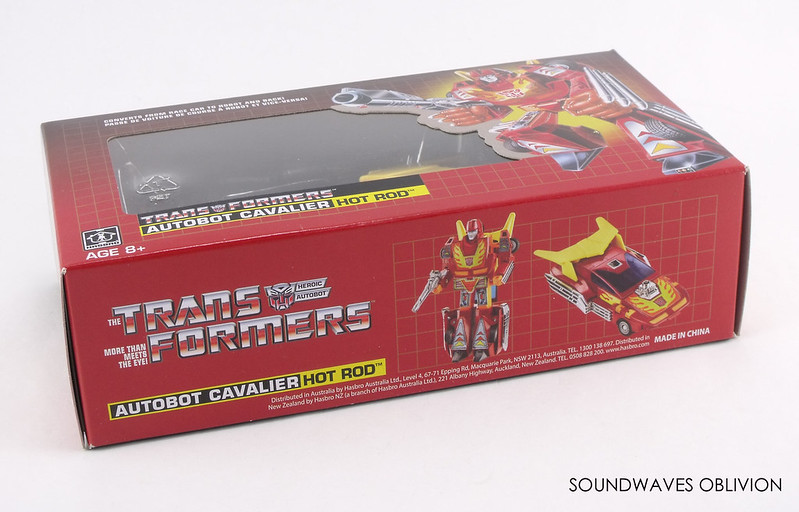 2018 saw Takara resurrecting their Encore line of reissues, however they have gone down the route of reissuing later line figures such as the 2000 Car Robots God Fire Convoy and the 2002 Beast Wars Returns (Beast Machines). 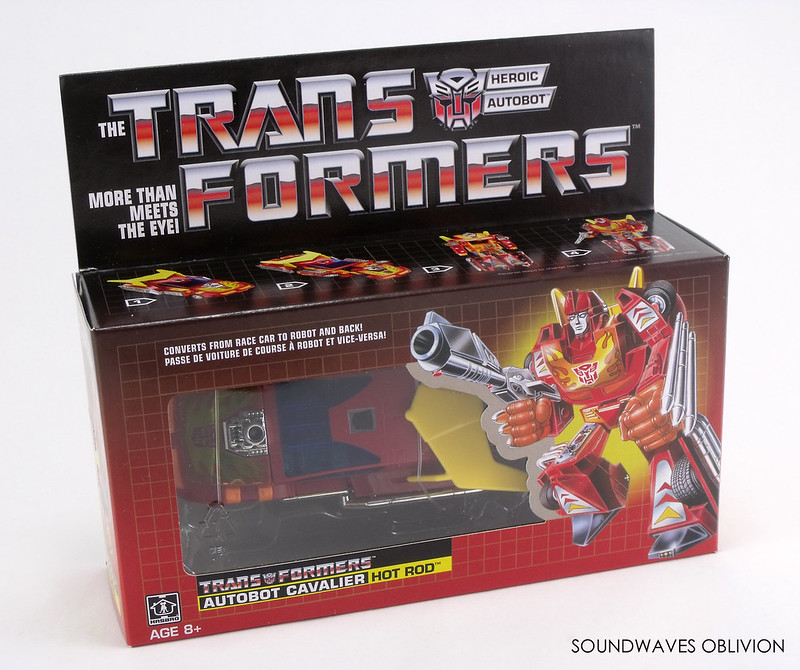 Hasbro have taken a different angle by going back and reissuing Transformers between 1984 and 1986 but unlike the original Commemorative Series from 2002 Hasbro are replicating the original boxes, the likeness is not exact but it is close enough. Takara did this themselves up to 2006 with the likes of Convoy, Starscream, Galvatron etc but seeing a Hasbro styled box just adds something more.


The original Hot Rod was released in 1986 and was one of the main characters in the Transformers the Movie who succeeded the Matrix from Optimus Prime becoming Rodimus Prime, the new Autobot leader. 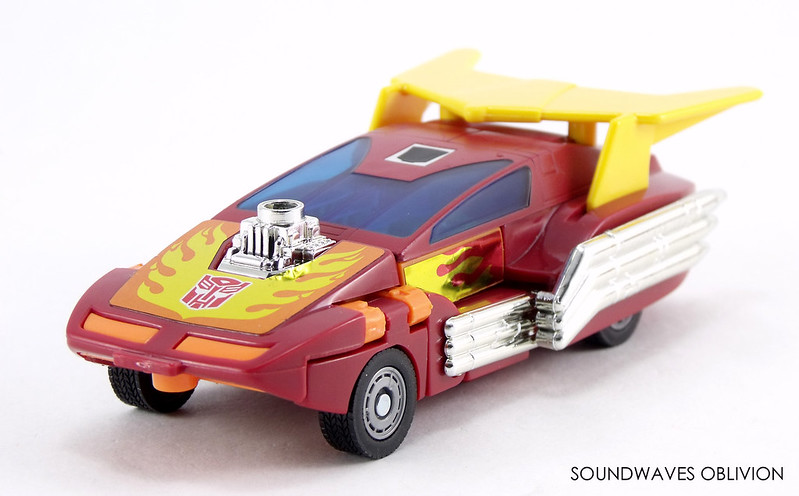 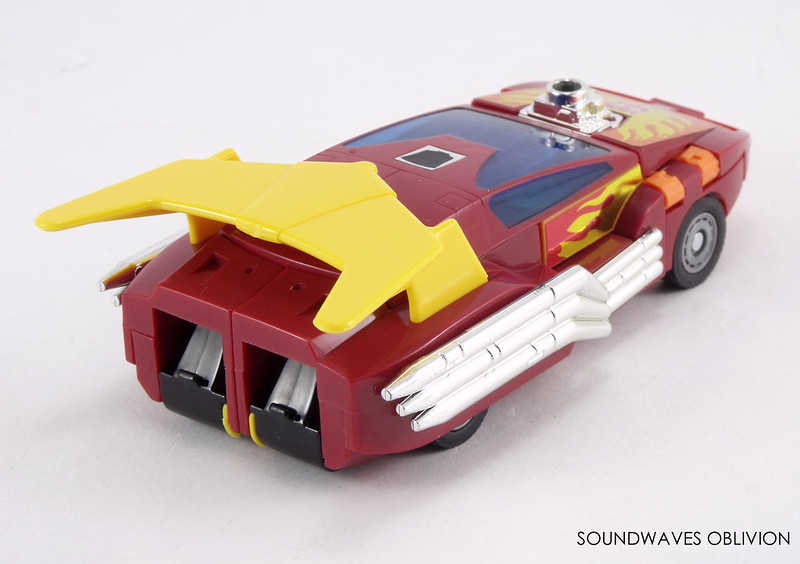 When Hasbro reissued Hot Rod in 2002, as they lost the trademark for the name he was renamed "Rodimus Major" but 16 years on Hasbro could finally release him as Hot Rod. 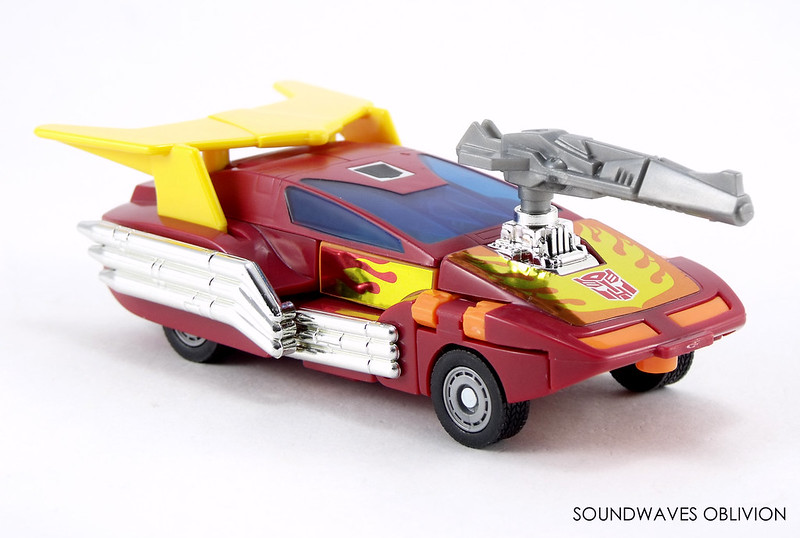 The box itself is really the main focus on this reissue and for those who have bought every other Hot Rod reissue such as myself, this was a feature which was hard to resist purchasing once again. The box is in dual languages (English and French) much like the old Hasbro Canadian boxes and the box flap features the original large Transformers logo albeit with slightly different colouring. The box flap is also folded over at the top rather than pieces of cardboard glued together, the edges are also sharp rather than rounded like the original. For some reason a lot of these Hot Rod reissues when purchased from Hasbro Asia have had their plastic trays inserted the wrong way round in the box. The boxes have been double taped so this may have been an error after quality checks. This is rather frustrating for those who are MISB collectors. The box also features the Hasbro logo from the 1980's which is another nice touch.

The rear of the box features the same artwork as the original and has the dual language tech spec and instead of the "Robot Points" which could be cut out, it has the Authentic Transformer logo which can be cut out but this time around there are no mail away offers. Rather than the original "It is a world Transformed" line at the top of the box it now reads "It is a world in constant change" much like at the front of the box "Transforms from race car" is replaced by "Converts from race car".

Hot Rod is held in place in the inner plastic tray by two plastic ties much like the other modern figures. Hot Rod comes with his two original guns, a sticker sheet which no longer has the Transformers logo on it and an instruction sheet. Unfortunately the instruction sheet is not a reprint of the original.

In vehicle mode, Hot Rod one of the first noticeable differences are the foil flame stickers on the side of the car. On the original Hot Rod these were matt stickers with a magenta colour alongside the flames which looked pale against the red colouring of the toy. Early prototype shots saw the toy in magenta colours rather than the final dark red of the finished toy. On the most recent reissue of Hot Rodimus (2004, Transformers Collection) these were tampographs printed on the figure. The rubsign on the roof is also slightly different than the originals and previous reissues with a more sharp outline rather than rounded. 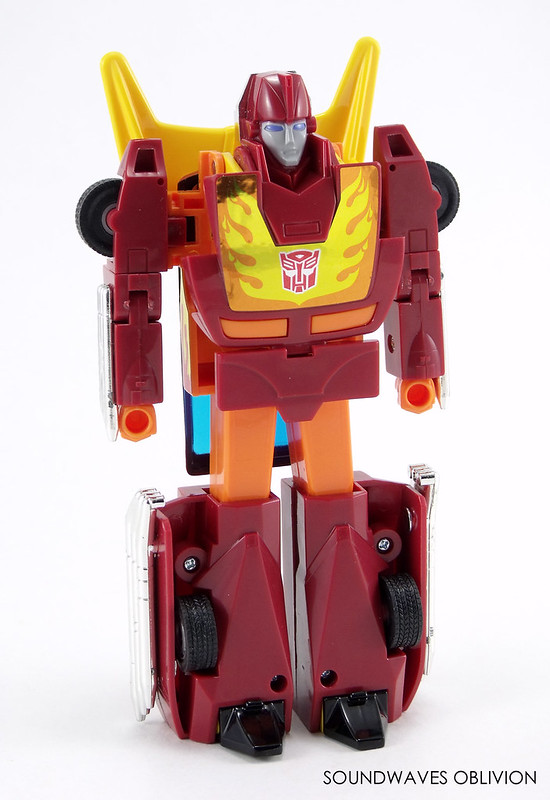 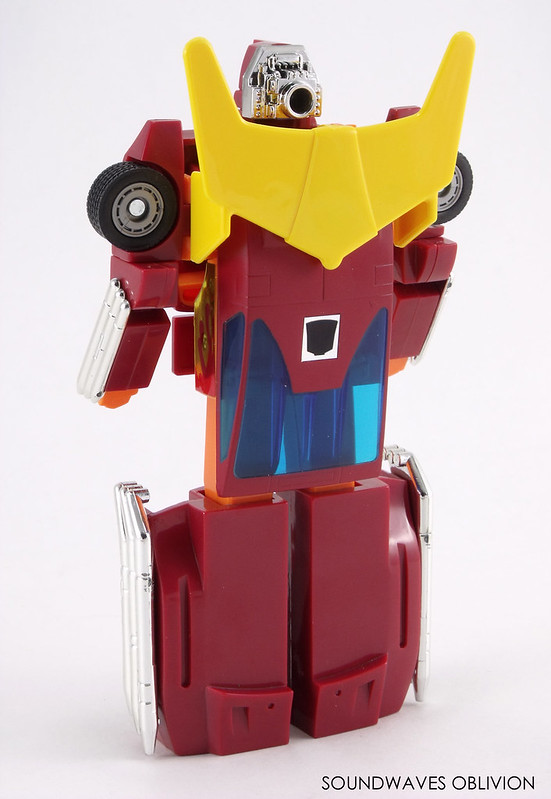 In robot mode one of the differences is the figure has black painted feet. In promotional photographs of this figure it appeared they might be plastic feet however they are painted black die cast metal. The trademark stamp for the figure have been moved from the orange torso and are not on the underside of the bonnet with a 2017, Hasbro, Takara and a Made in China stamp. 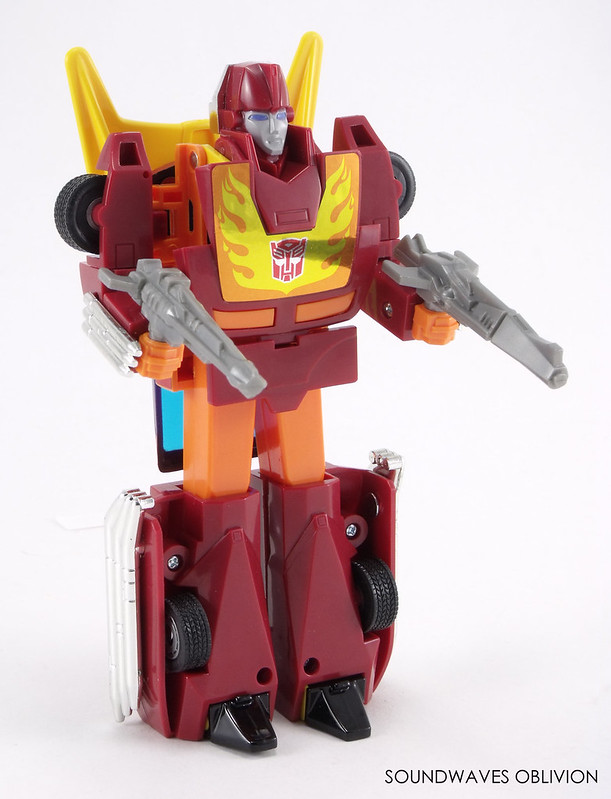 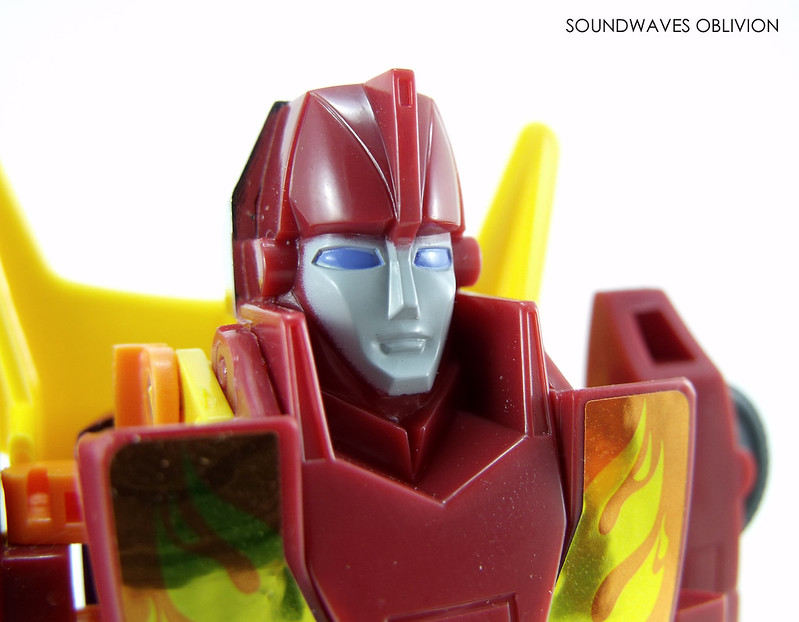 The figures mould uses the 2004 Transformers Collection version, so this figure has wider fist holes and a wider engine hole to accommodate a Targetmaster figure. The weapons are also feature the thicker pegs of the 2004 version so they can be held. 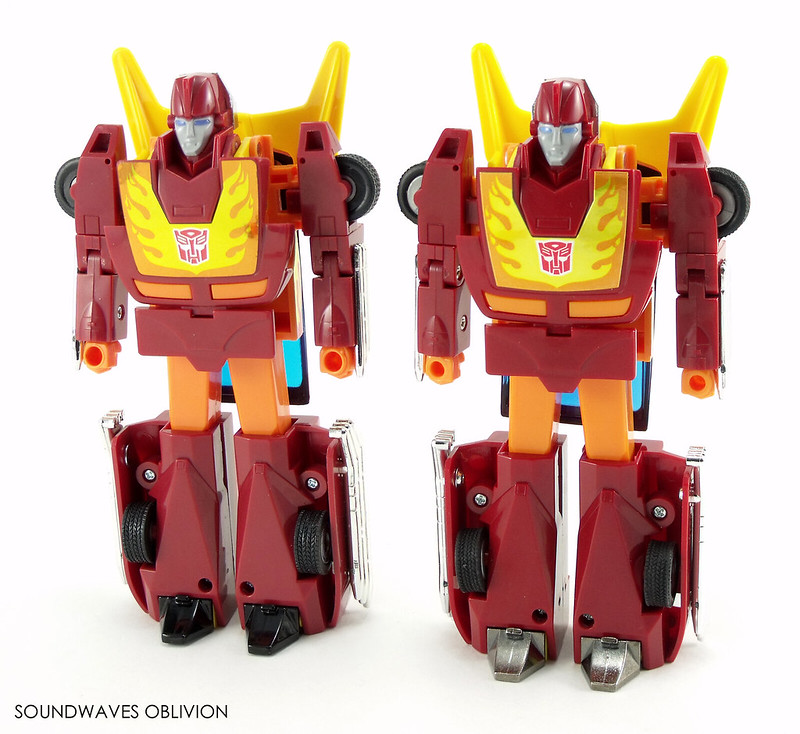 With Starscream, Devastator and 4 Minibots (Bumblebee, Outback, Tailgate & Swerve) on their way, it will be interesting to see what else Hasbro will be reissuing in vintage styled packaging. 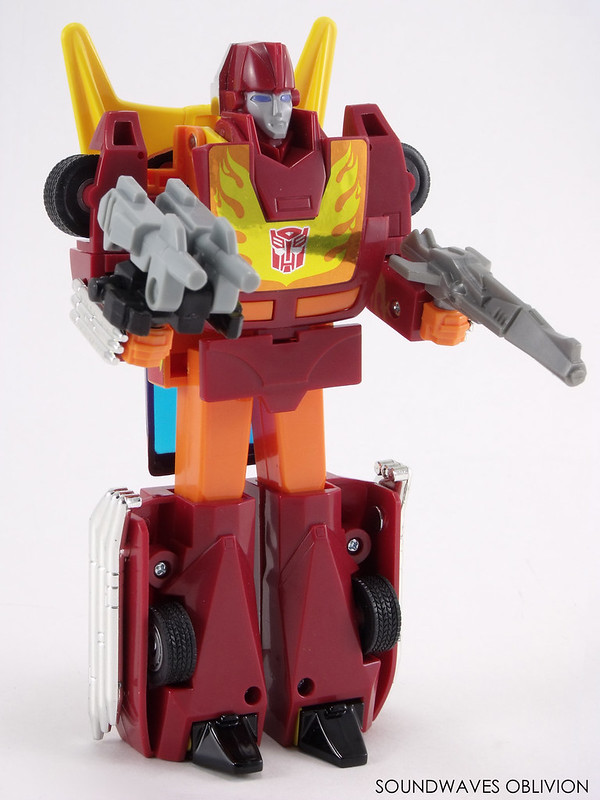 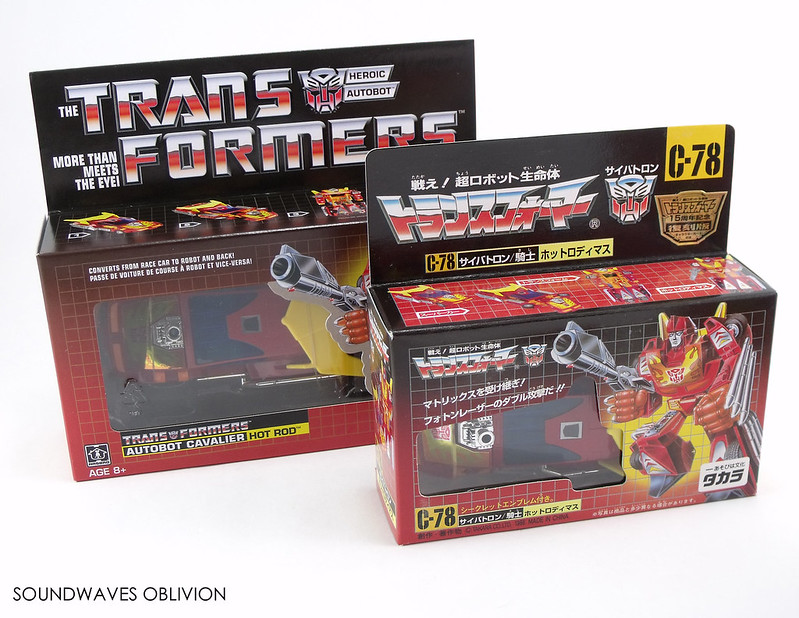