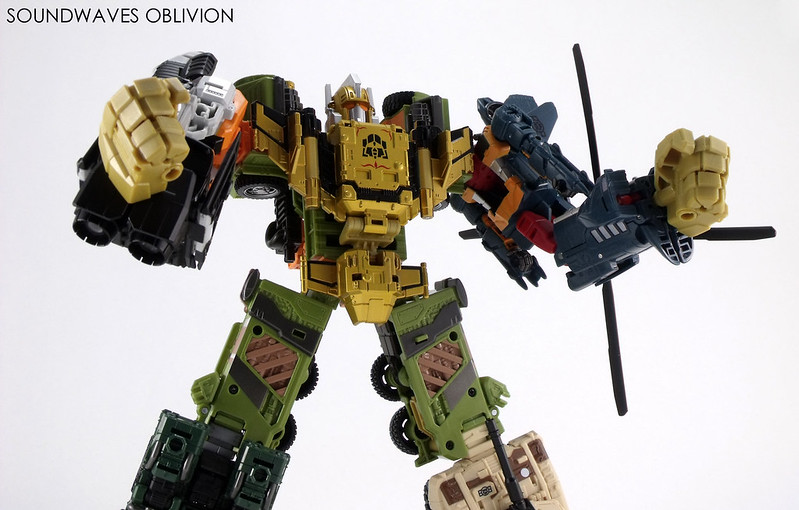 UW-EX Baldigus
Combat Specialist
The purpose of Baldigus is the reunion of the Destrongers, an elite troop resurrected by their leader, Devil Gigatron. The Combatrons who were successful escaping jail on Planet Seibertron were completely reformatted into new bodies to become even greater Combat Specialists. They now challenge the Cybertrons as a cruel combat group who will use any means necessary to attain victory.
STR...10; INT...8; SPD...8; END...10; RNK...9; CRG...10; FBL...10; SKL...8 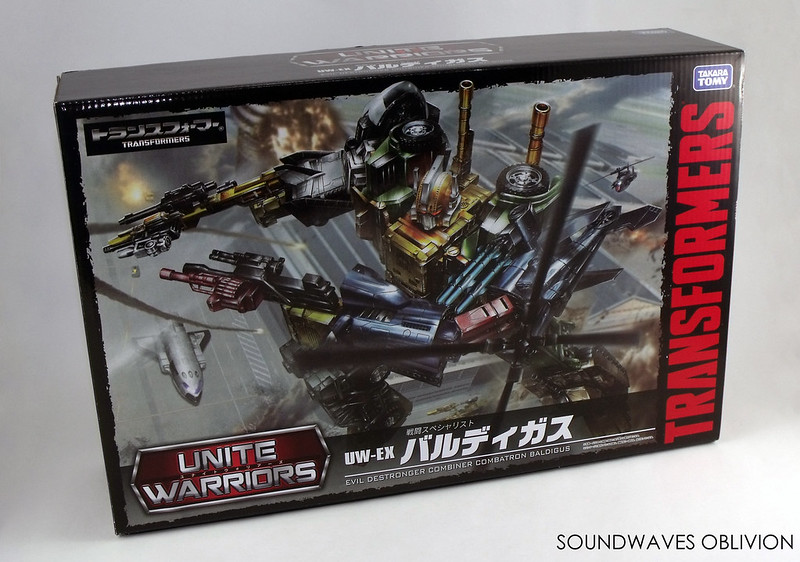 Baldigus was released in 2017 as a Takara Tomy Mall exclusive and was the last in the Unite Warriors series. Baldigus is based on the Car Robots version released in 2000 which was a repaint and slight remould of the original 1985 combiner, Bruticus. Much like the original Baldigus, the Unite Warriors version is also a repaint on the Unite Warriors UW-07 Bruticus with a few additional extras such as weapons which came from Unite Warriors Computicon and Devastator. Baldigus also has repainted fists and feet from Hasbro’s Computron giftset. The additional weapons combine together to form Baldigus's two larger guns; the Car Robots version had the standard weapons from the 1986 Bruticus but were remoulded to be able to join together. 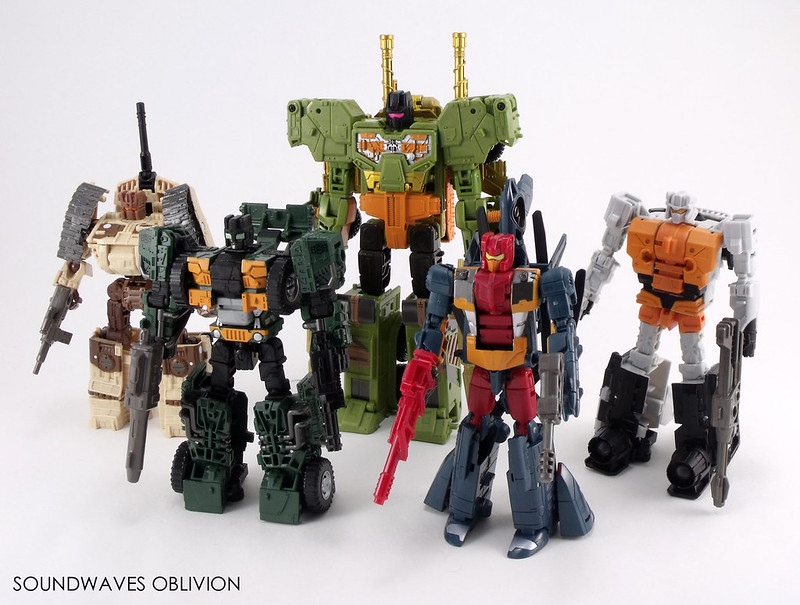 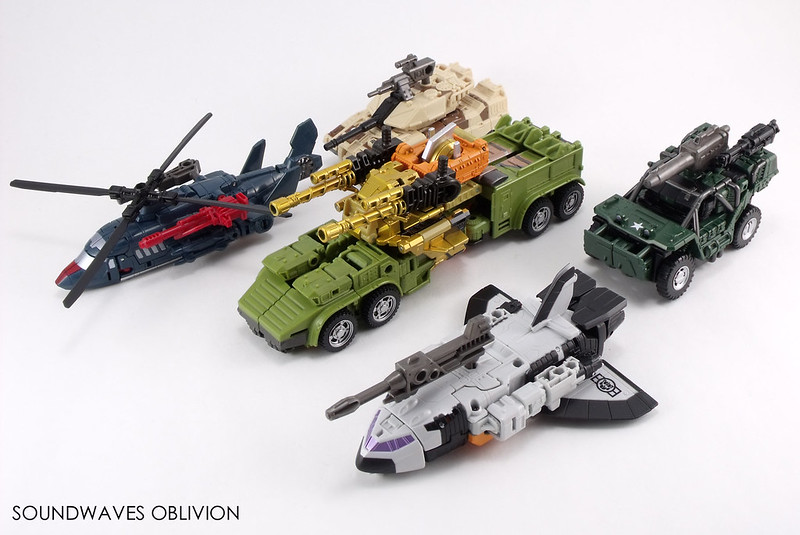 Although Baldigus' limbs can interchange, his main two configurations are  Flight Mission (which is also the standard Bruticus formation) featuring Hepter and Shuttler as the arms and Land Mission where Greejeeber and Dangar are the arms. 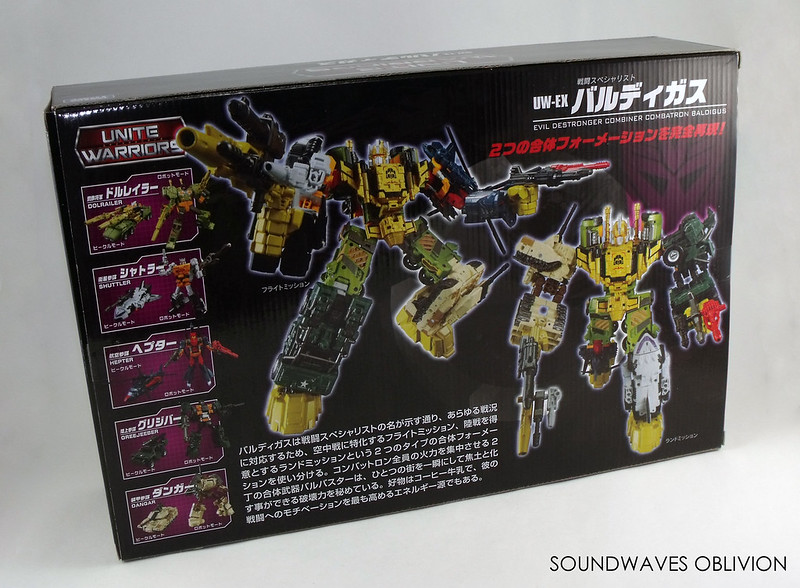 Back of Box Bio (Translated from the back of the box)
Baldigus is the name of the combat specialist, in order to deal with various battle conditions he has two types of combination, Flight Mission specialising in aerial battles and Land Mission specialising in ground based combat. His two combined weapons, the Bal Buster, concentrate the firepower of all Combatrons which can destroy a city in an instant. His favourite thing is coffee milk which is also the source of his energy and motivates him to fight. 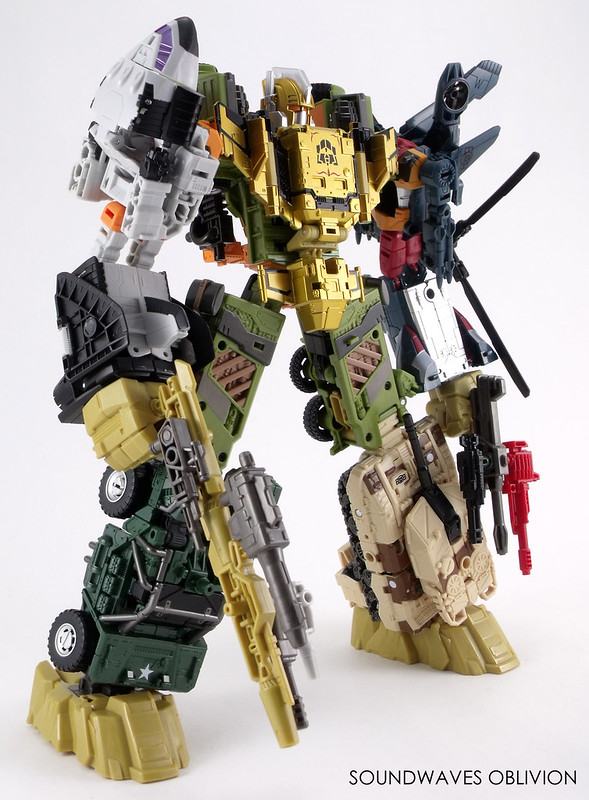 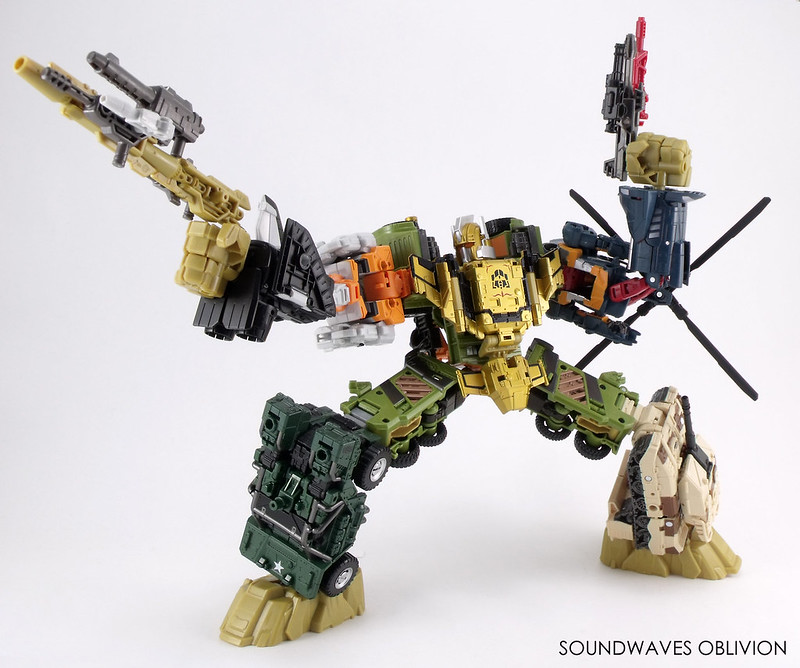 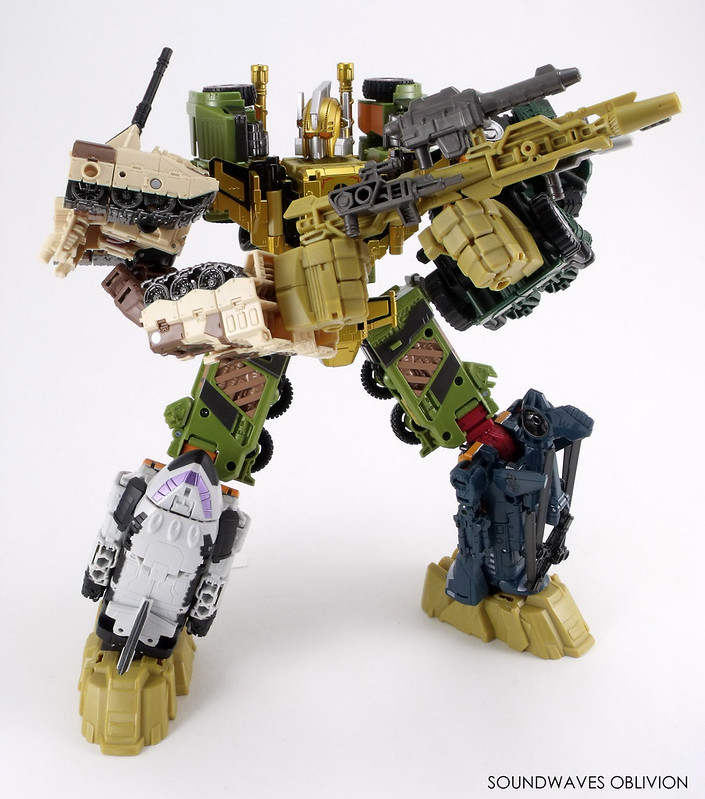 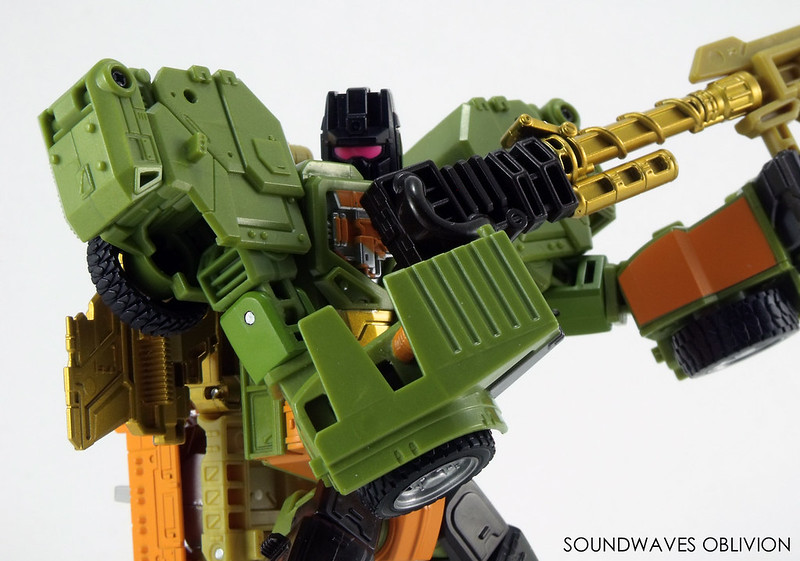 Dolrailer is a redeco of Unite Warriors Onslaught and comes with additional gold repainted weapons from Unite Warriors Scattershot. This is the tenth time the mould has been used:- 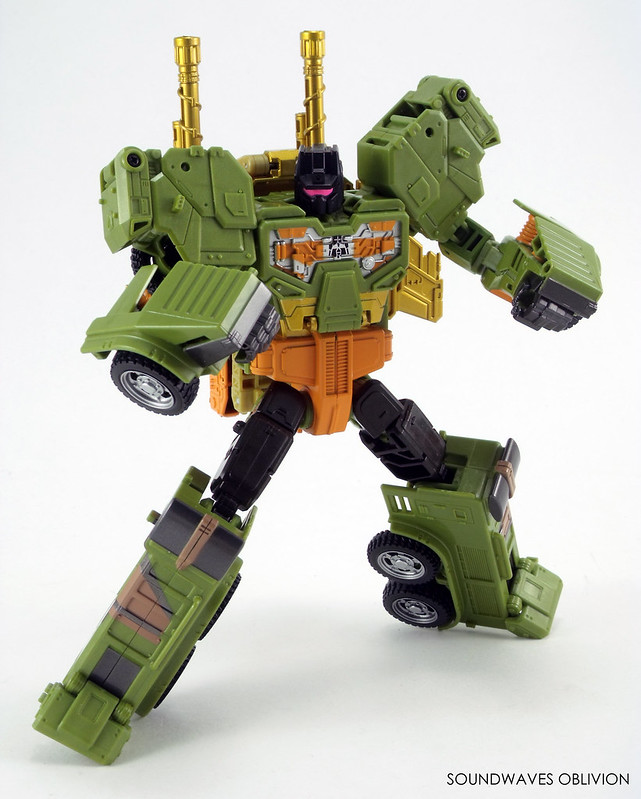 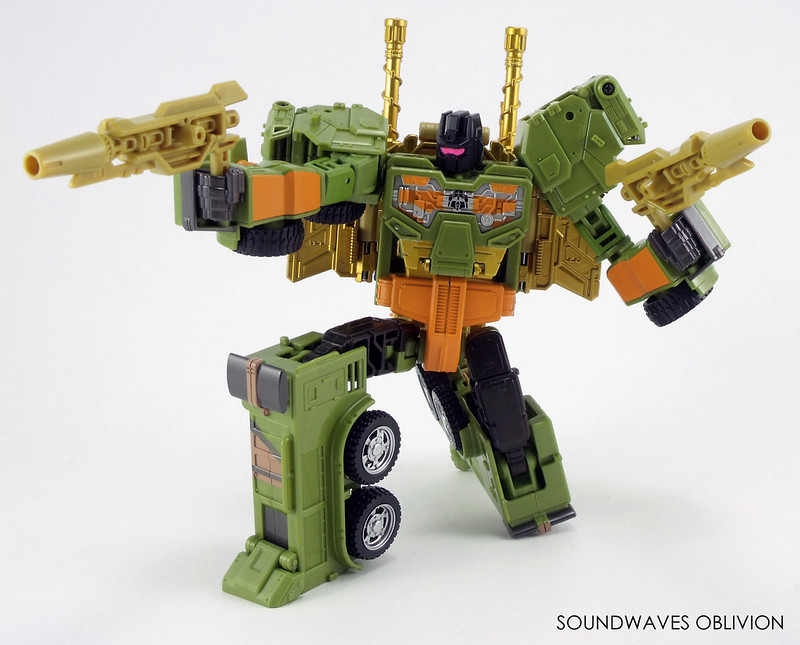 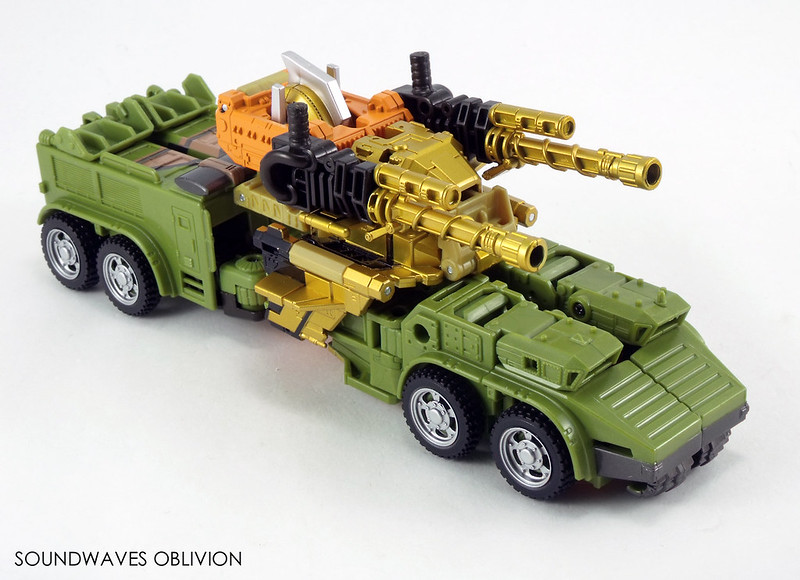 UW-EX Dolrailer (Translated from the box flap)
Steel Staff Officer
Leader of the Combatrons. Transforms into a combat trailer. Although cool calm and collected, he is an evil general yet is a model soldier sticking to the chain of command. Possess the most destructive firepower out of the Combatrons, capable of destroying anything within a 1km radius in an instant. Is not satisfied unless he gets his bath first. Treats his fellow Combatrons with care. 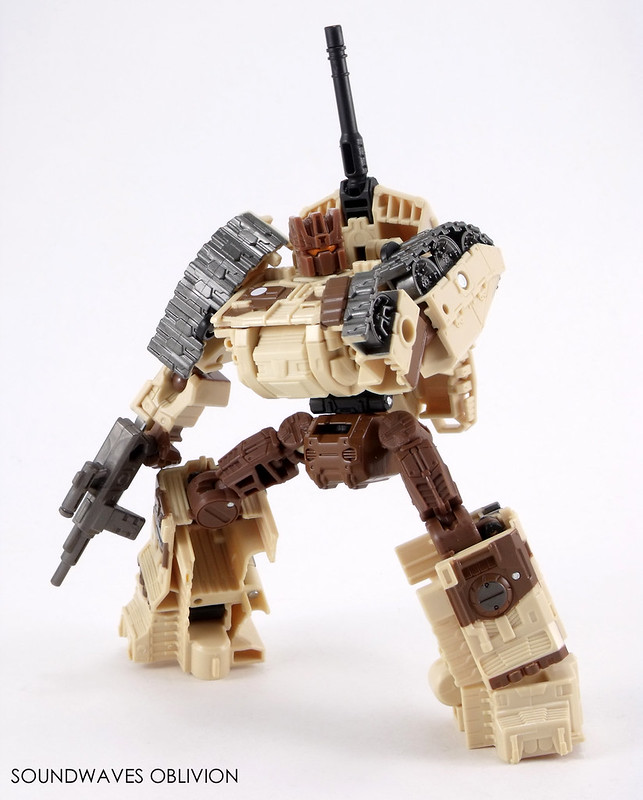 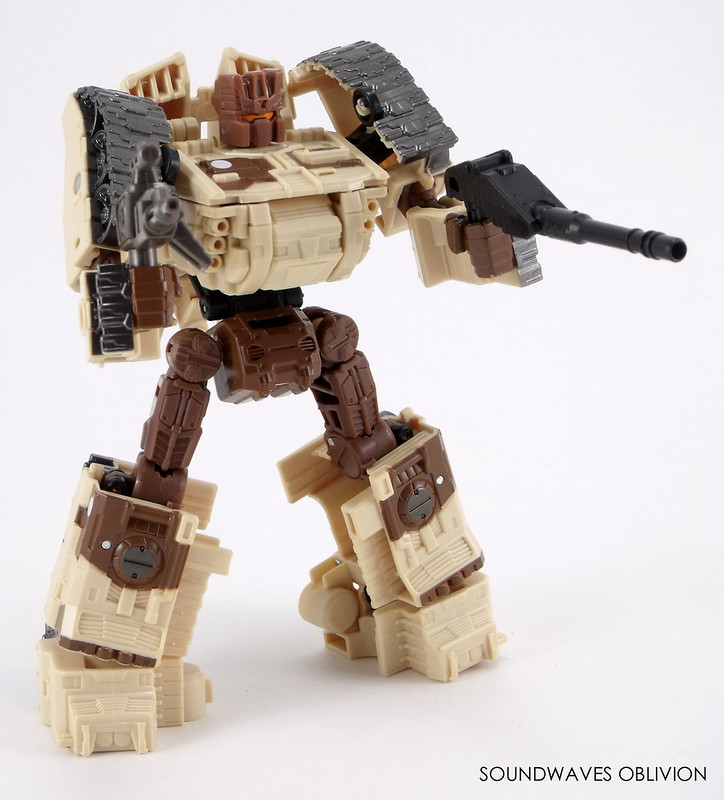 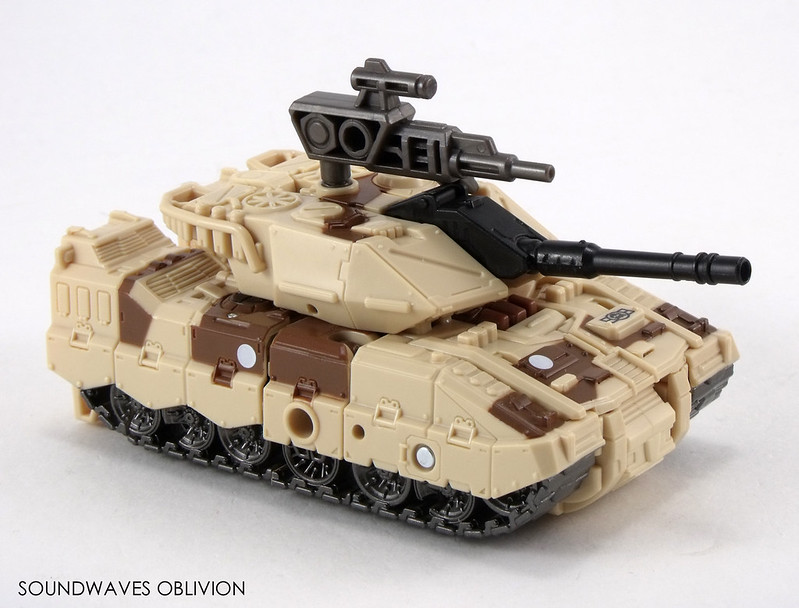 Armour Staff Officer
Transforms into a combat tank. Excels at desert warfare; in the desert battlefield he lurks beneath the ground setting ant lion type traps then delivers the final blow to his enemies with the Dangar Cannon. His Cyber-Titanium treads can run on any bad road surface, crashing into enemies destroying everything in his path. Because he loves the desert he especially loves sand baths. 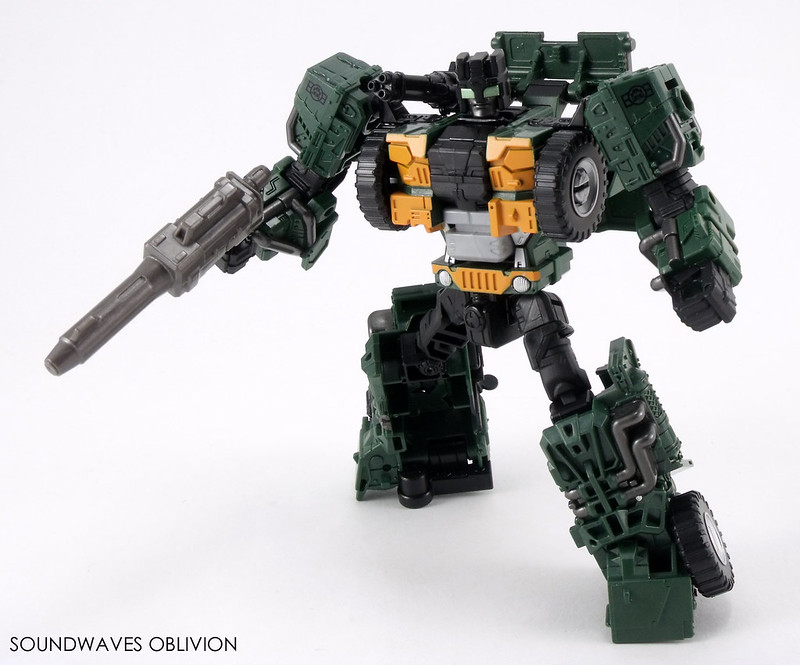 Greejeeber is a repaint of Swindle and comes with an additional weapon which is a repaint of Unite Warriors Long Hauls gun. In my opinion Greejeeber is the best mould out of the set. I couldn't see it in the instructions but Greejeebers smaller handgun pegs in on his backpack to become a shoulder mounted cannon. This is the eleventh time the mould has been used. 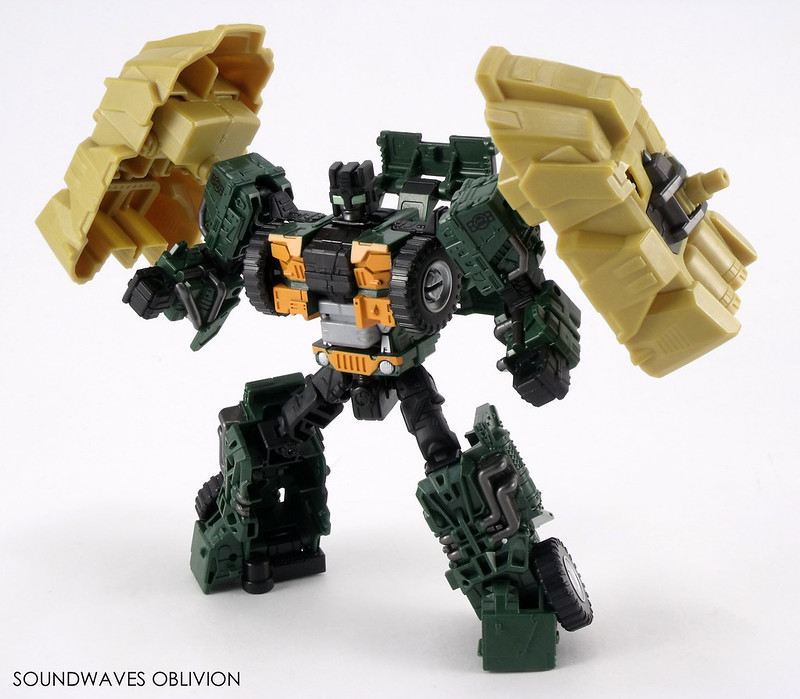 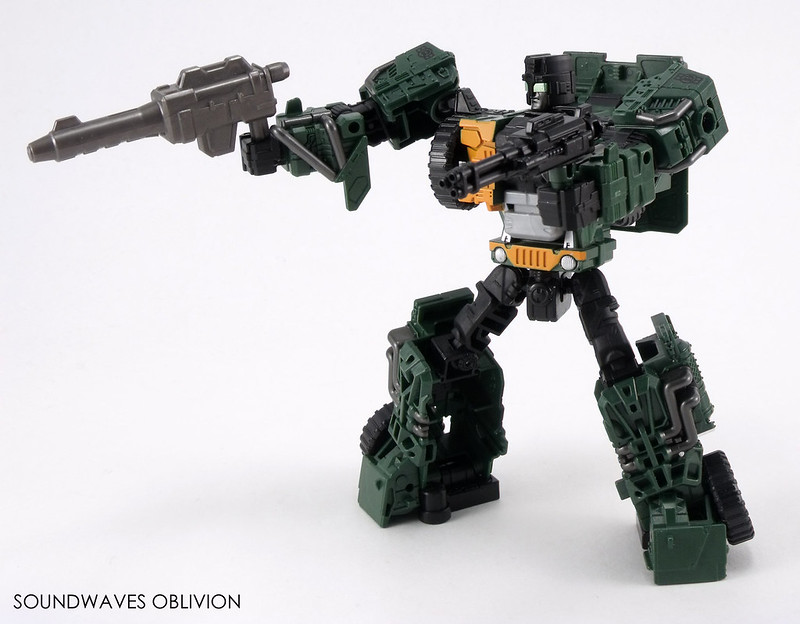 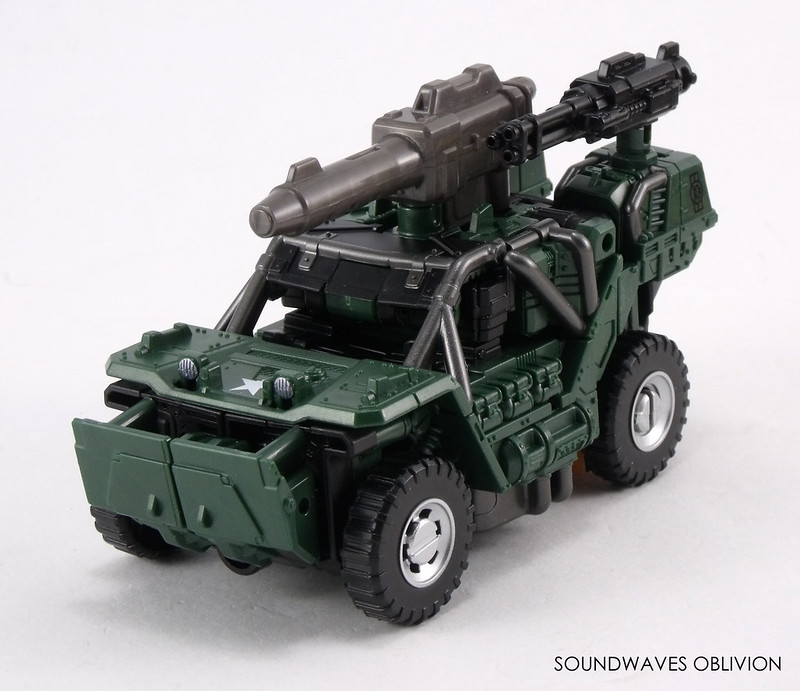 UW-EX Greejeeber (Translated from the box flap)
Ground Staff Officer
Transforms into a combat buggy. Good at polar warfare and prefers battles on rainy days. Well versed in martial arts, he is a master of Crystalocution and although he specialises in hand to hand combat he is a very accurate shot. He travels the universe to master all forms of martial arts. He looks forwards to the sauna after fighting on the battlefield. 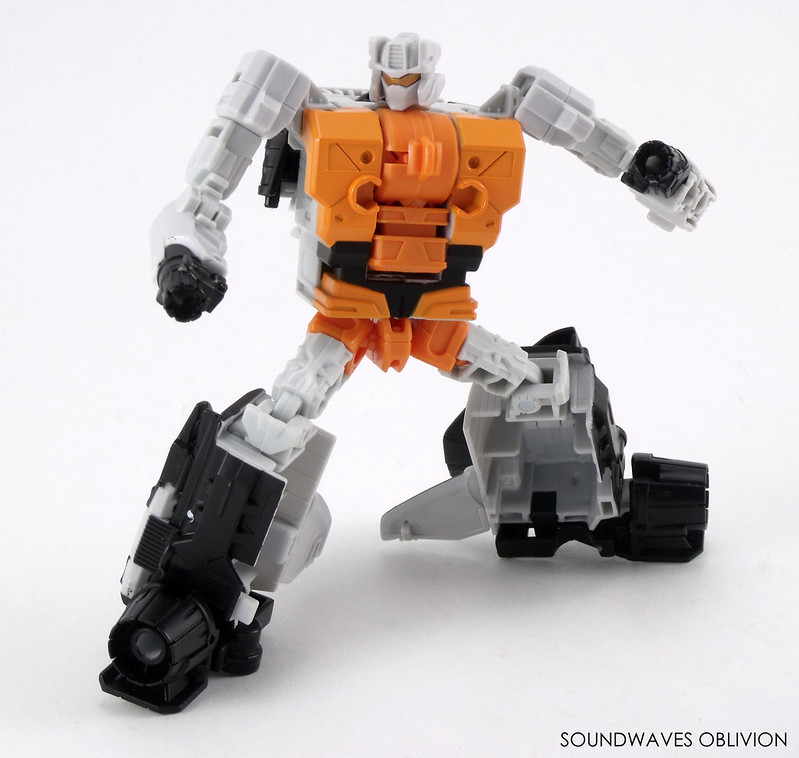 When Combiner Wars Blast Off was released in 2016 it was a disappointment to most that it was a redeco of the Aerialbot Quickslinger (Slingshot). When Takara Tomy released their Bruticus box set, it came with a brand new mould for Blast Off which was similar to the G1 animated model. The mould was later re-purposed into Strafe for Takara Tomys UW-08 Computicon Box Set. For Shuttler, the Blast Off mould was flipped around and the arms were swapped to replicate Shuttler's animation model which was heavily based on the toy. When Hasbro finally released this version of Blast Off under their Prime Wars Trilogy, they used the Shuttler mould and recoloured it based on the original G1 toy. Shuttler comes with a redeco of Unite Warriors Scrappers gun. 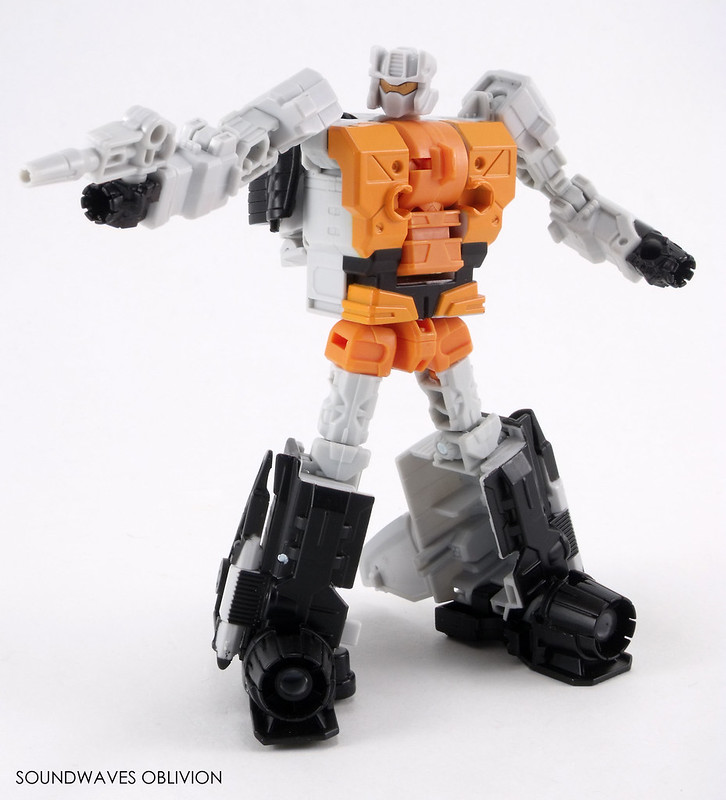 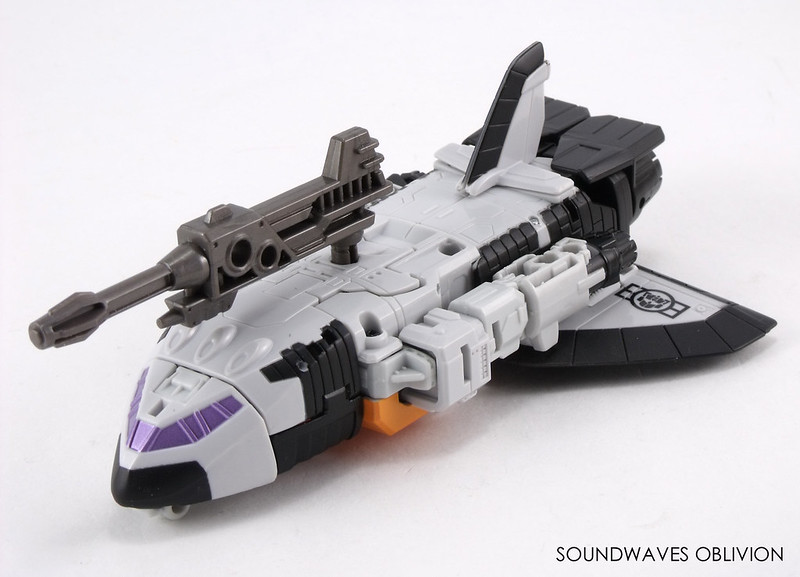 UW-EX Shuttler (Translated from the box flap)
Satellite Staff Officer
Transforms into a combat shuttle. Equipped with a high powered rocket engine, he can break out of the atmosphere on his own. HIs body is extremely heat resistant which can also deflect laser weapon attacks. He specialises as a high altitude sniper from satellite orbit. Enjoys long lukewarm baths. 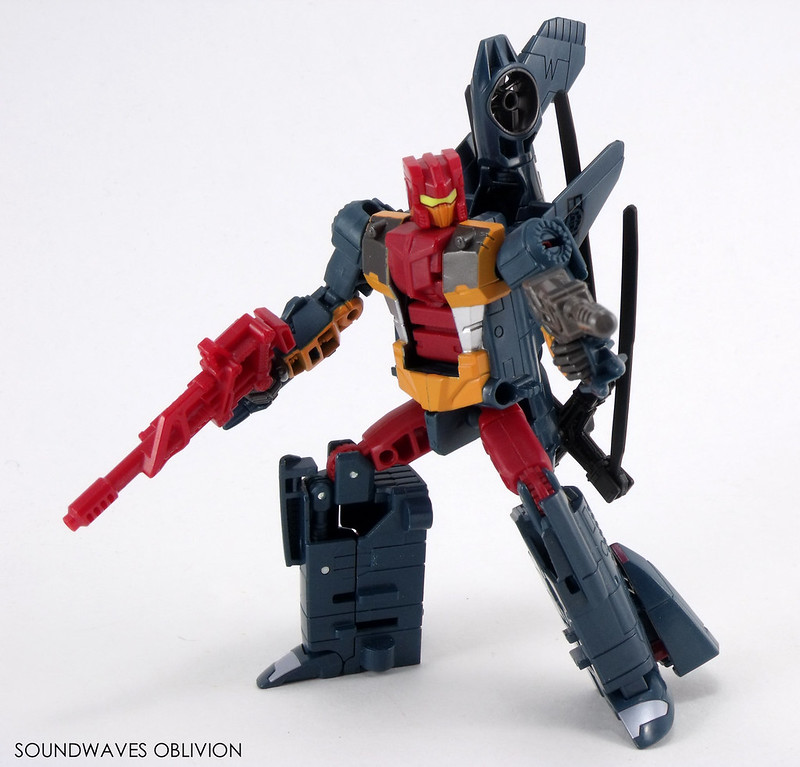 Hepter is a straight redeco of UW-07 Vorter which comes with the 4 bladed rotor. Hepter also comes with a redeco of Unite Warriors Mixmaster's weapon. In robot mode one of Hepters rotors won't stay folded but that may just affect my copy. This is the twelfth time the mould has been used:- 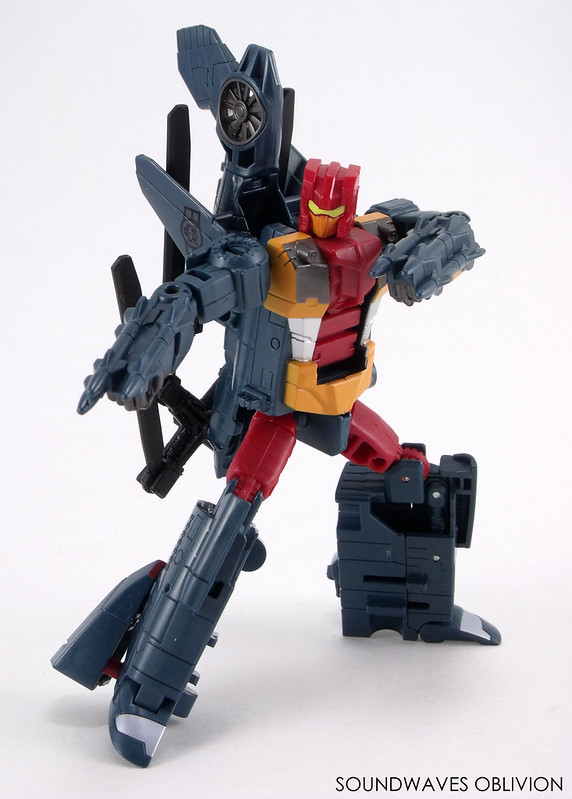 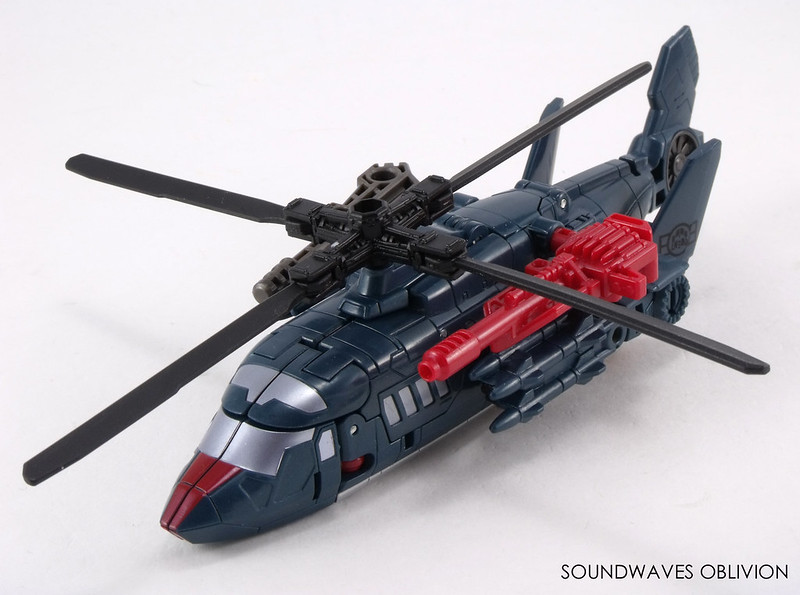 UW-EX Hepter (Translated from the box flap)
Aerial Staff Officer
Transforms into a combat helicopter. With his silent flight and stealth ability he is an assassin able to approach enemies without being noticed. His main rotor is as sharp as a sword, capable of cutting through any metal and is an effective weapon for Baldigus in close combat situations. Enjoys open air baths with impressive views. 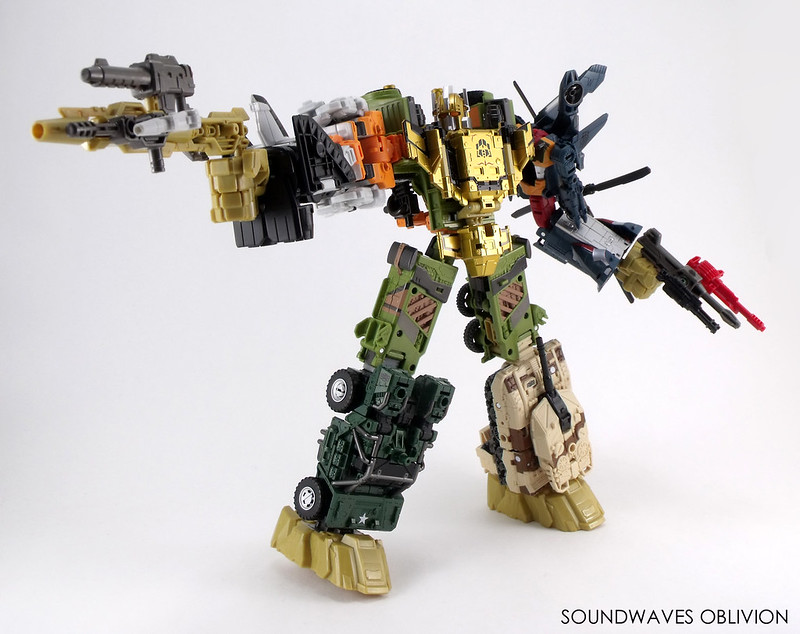 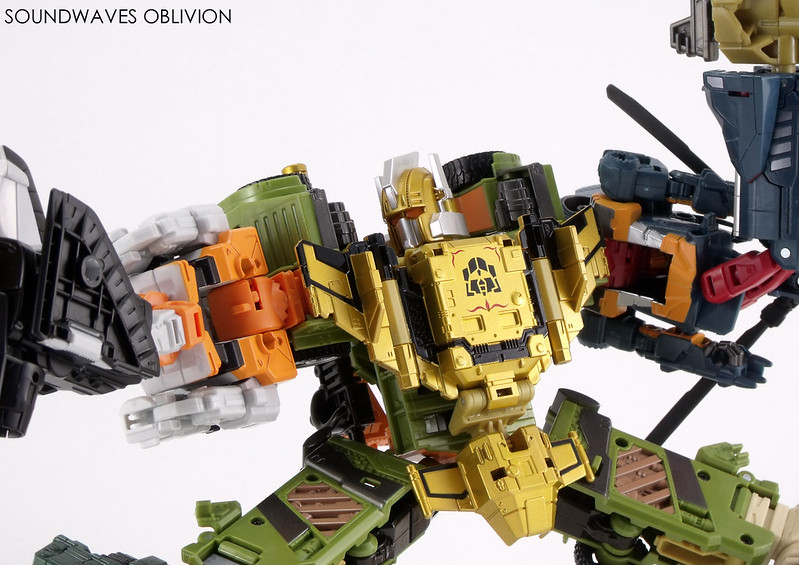