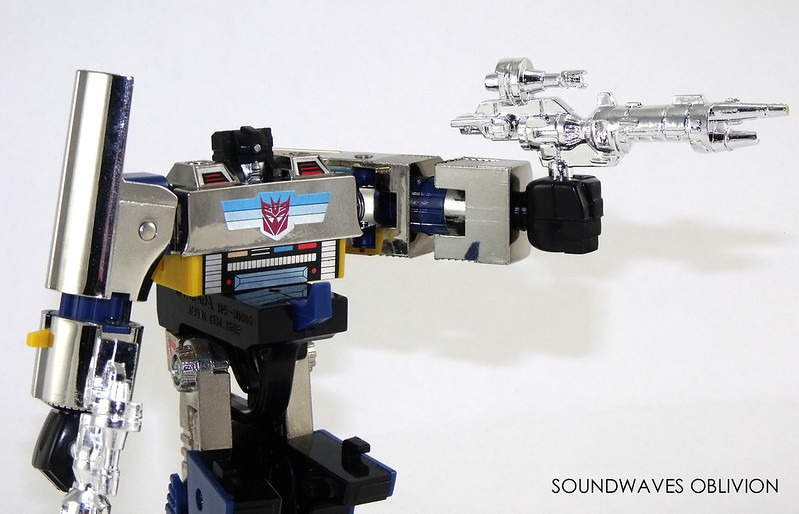 Profile (Translated from the back of the box)
Browning D-308
Function: Gunman
Transformation: Pistol
Ability: As a robot, he is made to scale to humans. In pistol form, he cannot attack by himself, but can deliver a tremendous blow to his enemies making use of the power from the person holding him.
Weapon: Sniper Shot
Final Attack: "Capsule Burst" - Depending on the circumstance, he can discharge various types of capsules.
STR:7; INT:4; SPD:5; END:8; RNK:4; CRG:6; FPR:9; SKL:8 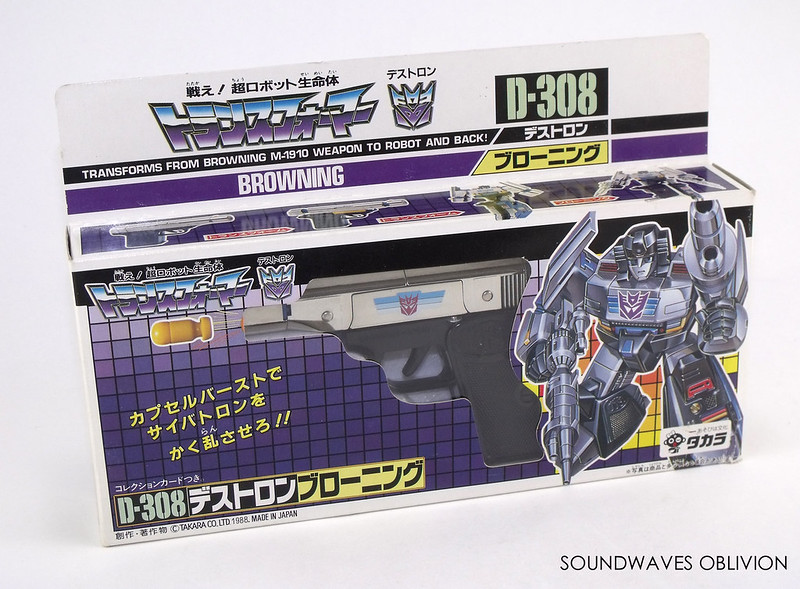 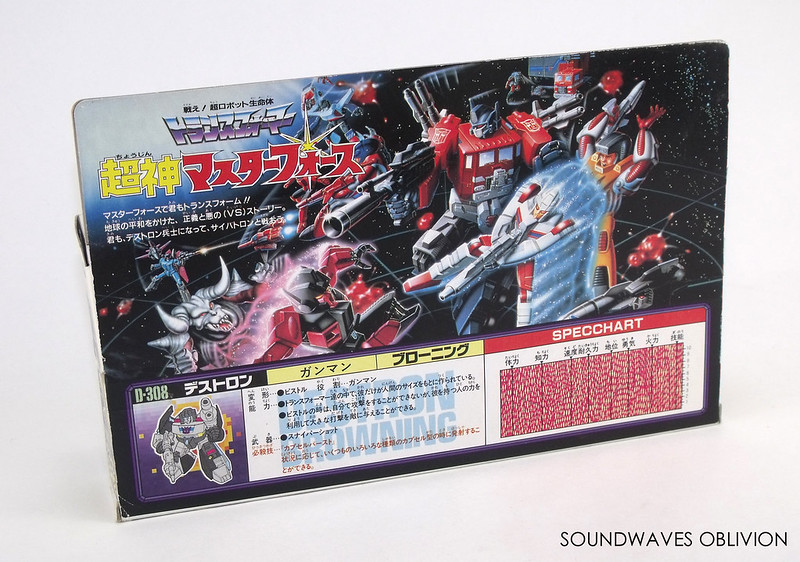 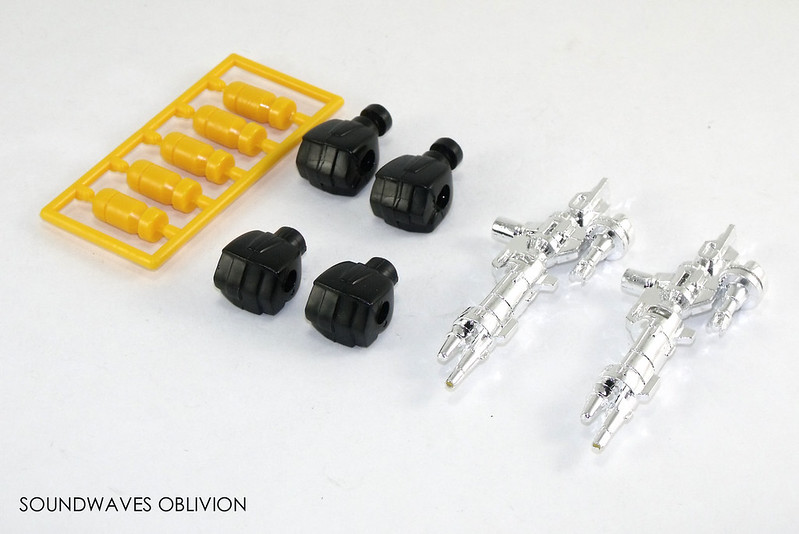 Browning is the second of the three Gun Robos from Takaras original Micro Change line to be introduced into the Transformers toy line in the 1988 Super God Masterforce Series. 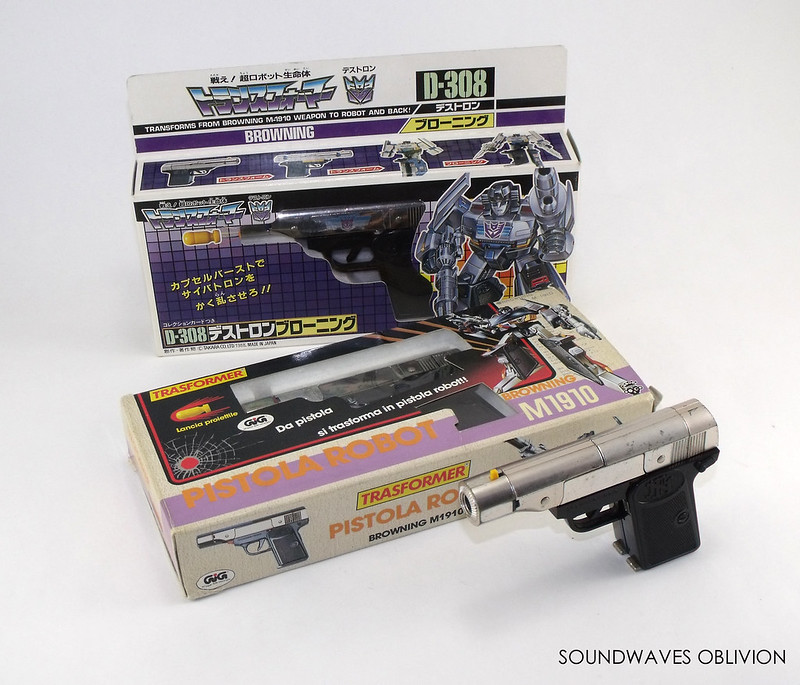 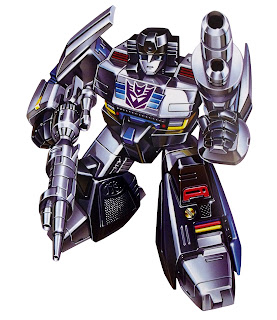 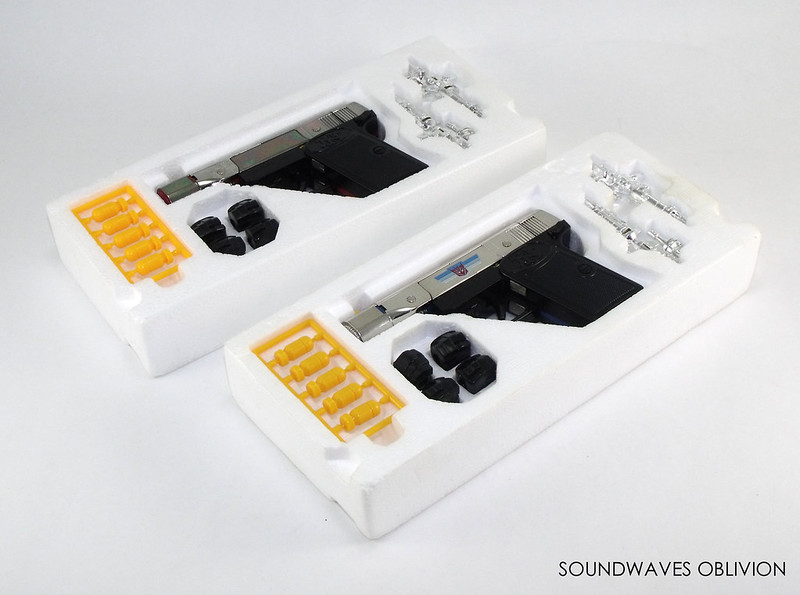 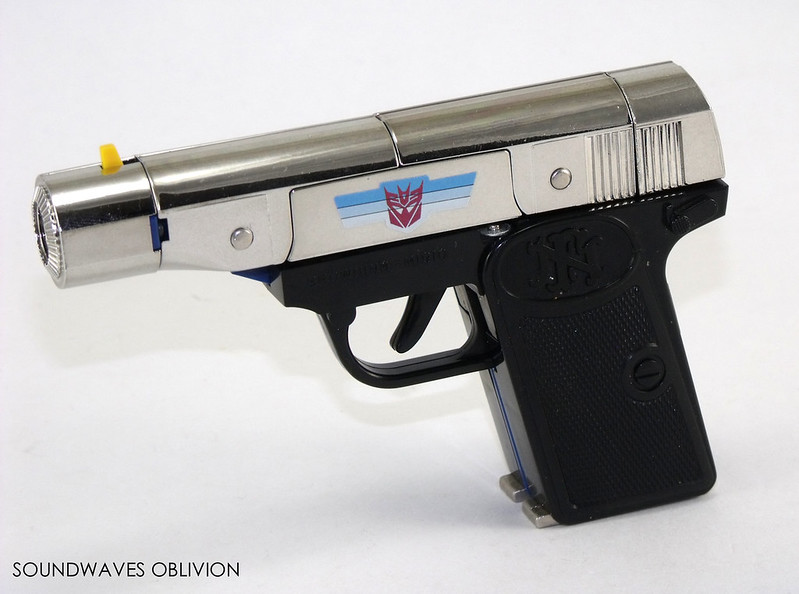 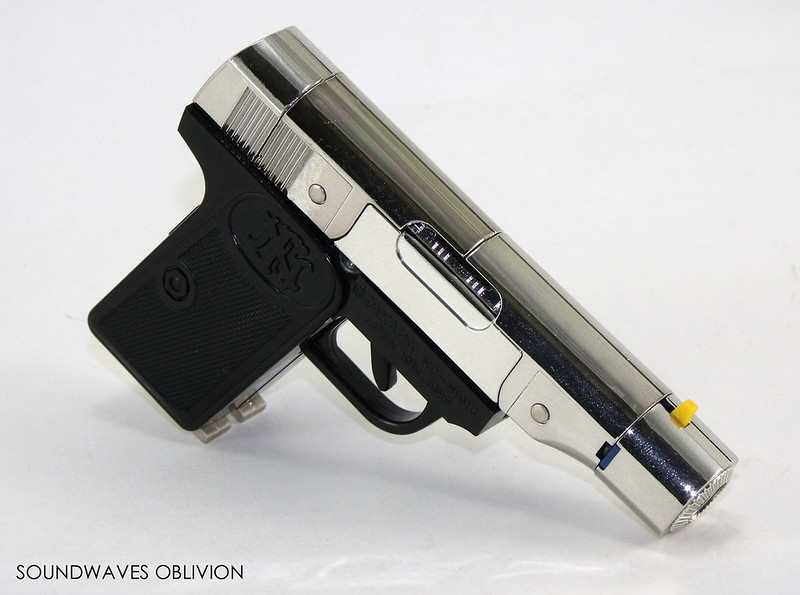 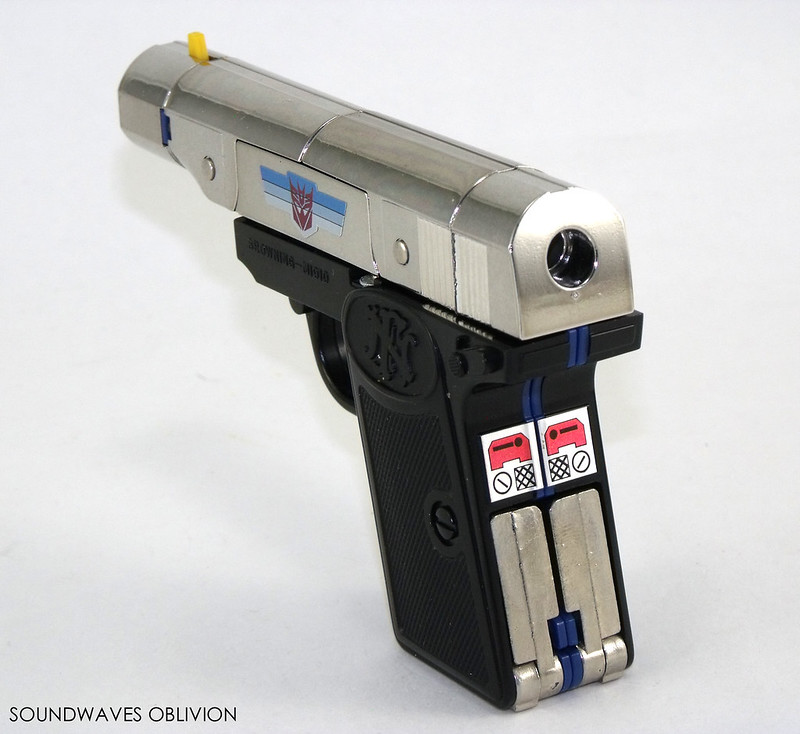 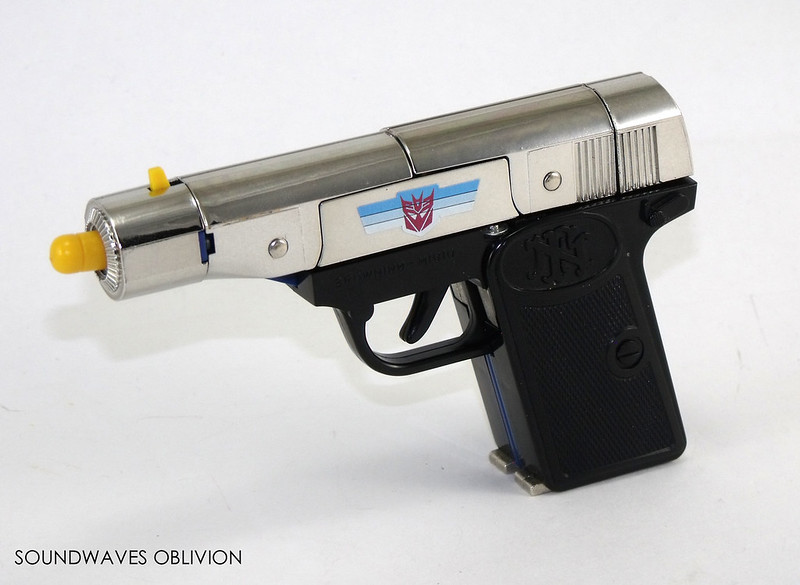 Browning's box is the same size as the Micro Change version albeit with a fold up flap displaying the Transformers logo. Rather than reuse the original box art, there is a new illustration of Browning adorning the right hand side of the box. The rear of the box features the same artwork as seen on Hasbro's releases that year with Browning's tech spec and bio and the Super God Masterforce logo. The polystyrene insert is also identical to the Microchange version and it comes with the same accessories as the Micro Change version which include two chromed guns, four fists and a sprue of 5 yellow bullets. 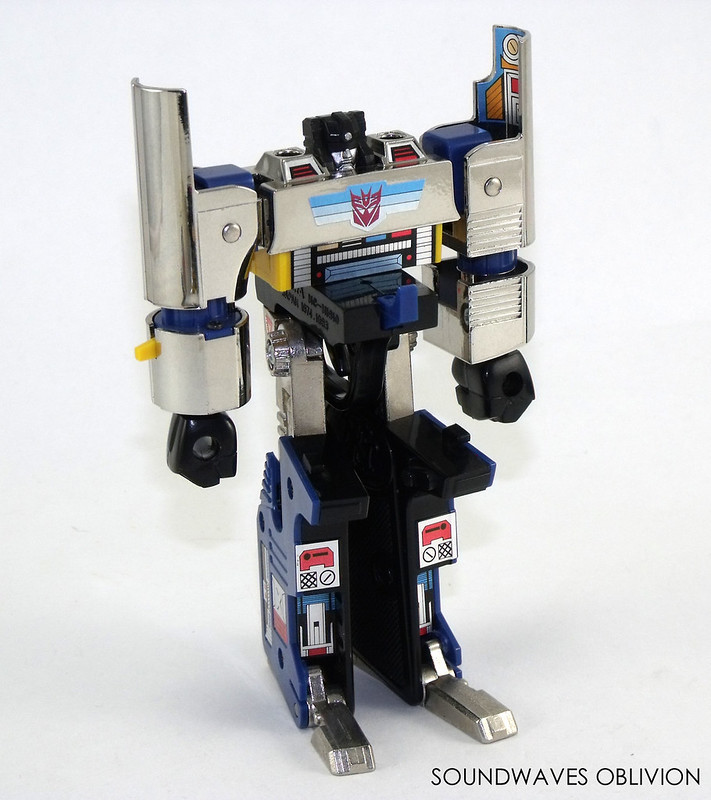 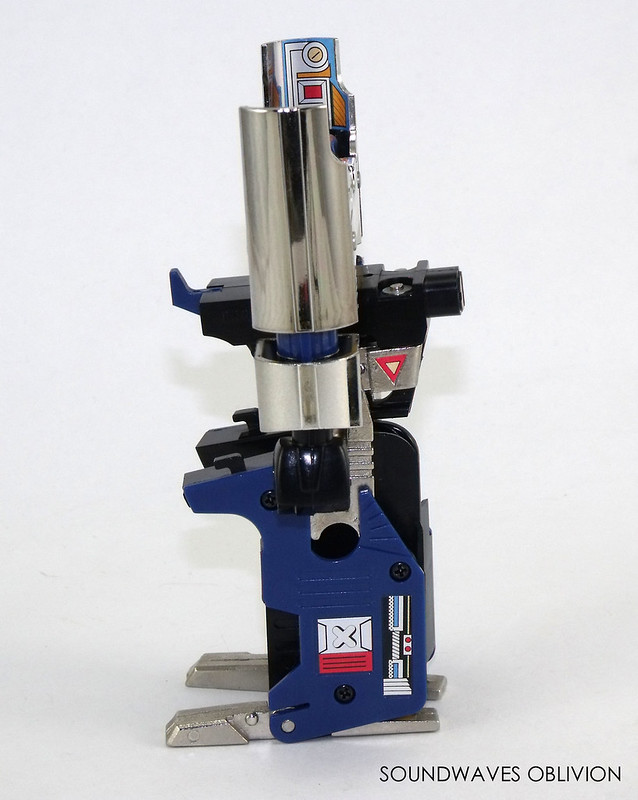 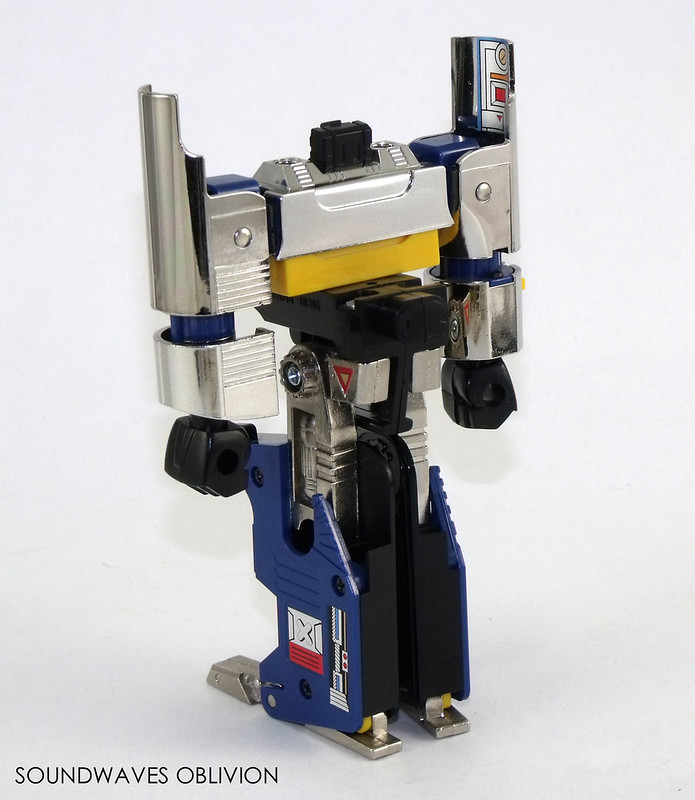 Browning first appeared in episode 20 of the Super God Masterforce cartoon "The Cybertron warrior, Sixknight?!". Browning was given to Cancer by Mega as a gift. Unlike Megatron in the series, Browning does not mass-shift and remains a small robot. Additionally his cartoon appearance does not match the toy and looks more similar to the blue version of the Micro Change toy. 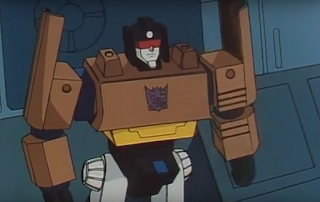 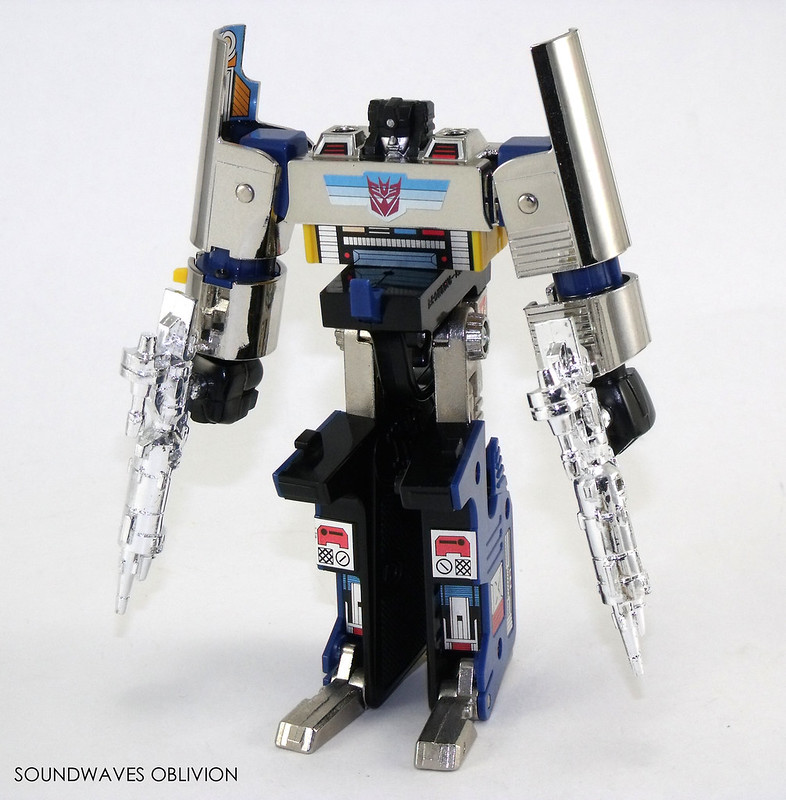 Browning is possibly one of the better Gun Robos released by Takara, maintaining reasonable proportions in robot mode as well as having a good pistol mode. I would highly recommend this figure although the Masterforce and Micro Change versions are quite costly nowadays. 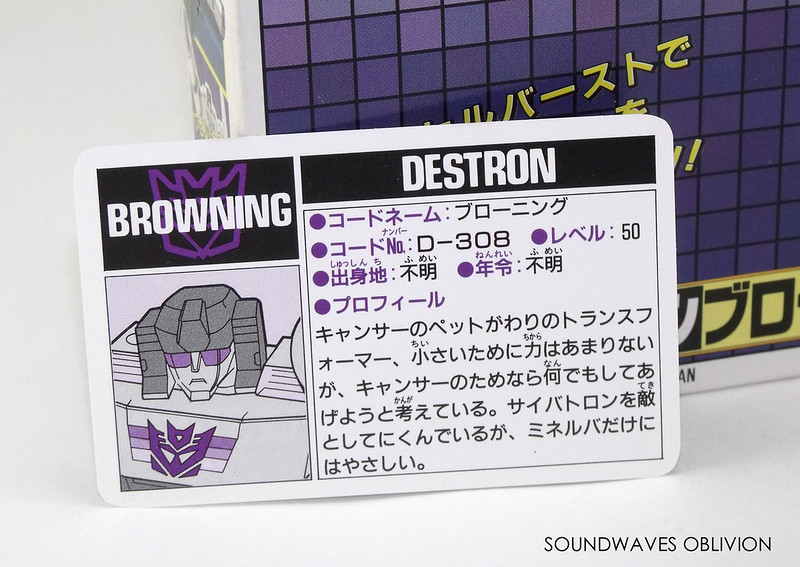 Profile (Translated from the collectors card)
-Code name: Browning
-Code number: D-308
-Level: 50
-Origin: Unknown
-Age: Unknown
-Profile: A pet Transformer to Cancer. May not have much power due to his small size, but does anything for Cancer. Sees the Cybertrons as enemies but is only nice to Minerva. 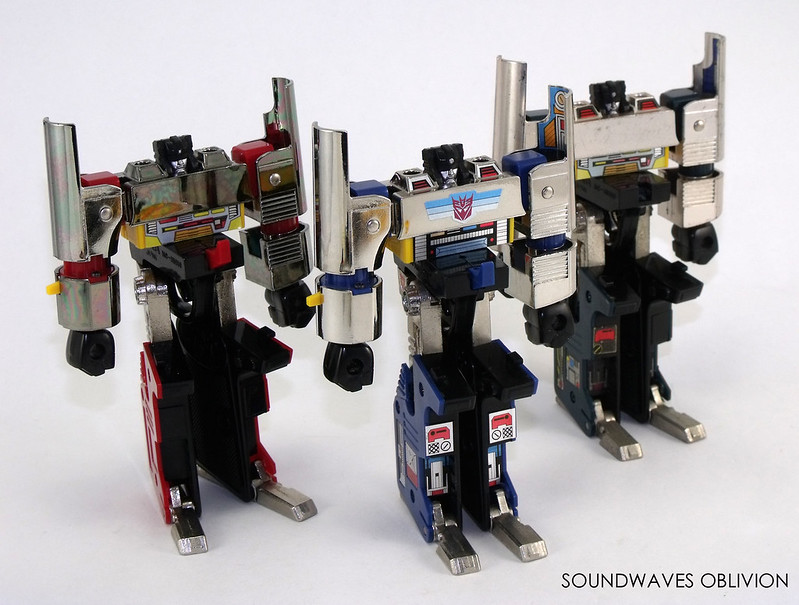 View the full gallery here on Flickr.
Posted by Jeremy Barlow at 09:05