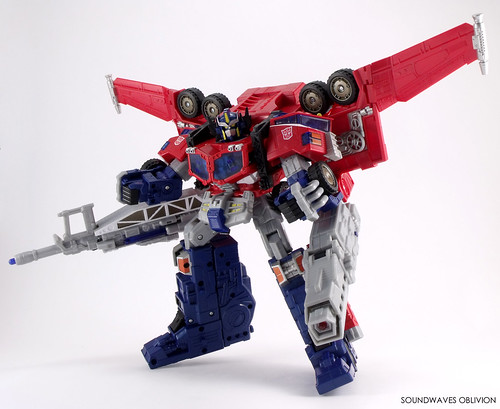 GC-01 CYBERTRON General Commander Galaxy Convoy
“The wisdom within me will lead to freedom.”
GALAXY CONVOY FILE
I am Galaxy Convoy, General Commander of the Cybertrons. I’m always first to the battlefield and fight until the end; I pay my respects and dignity to the “Matrix”, the proof of command. On Earth I disguise myself as a fire engine but when it comes to a fight, I transform into a robot and ignite my “Force Chip” firing my special weapon to wipe out the enemy. The blinding blast carves the path to freedom and I will fight with my Cybertron army to one day restore peace throughout the entire universe.
PWR...10; INT...10; SPD...9; END...10; RNK...10; CRG...10; FPR...10; TECH...10; TTL...79 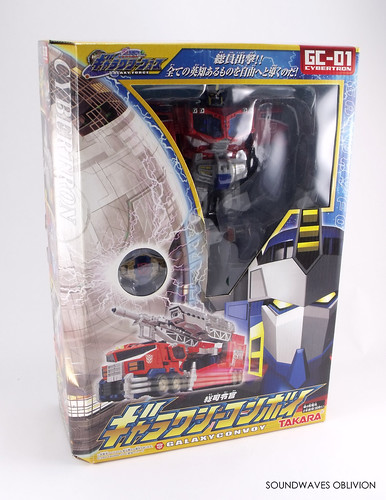 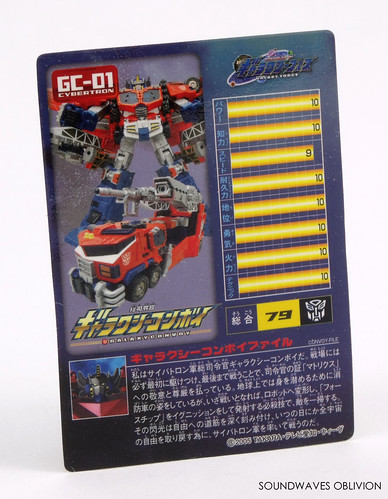 The Galaxy Force (aka Cybertron) series is the final instalment of the Unicron Trilogy from the early 2000's. In Japan the series split away from Micron Legend and Super Link, contrary to Hasbro's intention but later on Galaxy Force was retconned to be the third part of the trilogy. The Galaxy Force toys all came with "Force Chips" which inserted into the robots or weaponry to activate spring loaded features 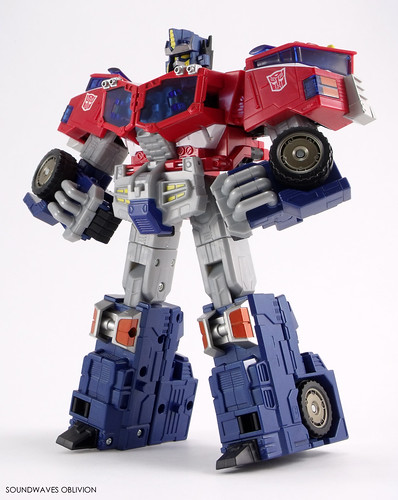 Galaxy Convoy was one of the first of the toys released December 28th 2004 and retailed for 5,200 Yen. Galaxy Convoy is packaged in his small robot mode in a large window box, sliding out the plastic tray reveals the rest of his accessories. 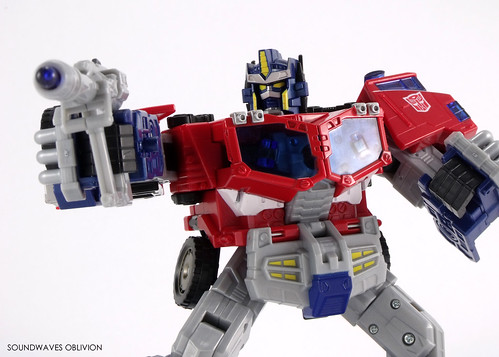 The small bulky robot mode is very impressive and is an improvement from the Super Link Grand Convoy. Unlike the other Unicron Trilogy Convoy's, this version is faithful to the G1 colour scheme. The articulation is great and even the fists can also open and close. The robot head also features a mouth instead of the traditional face plate, a detail not seen since the Beast Wars / Machines series. Early releases of Energon Optimus Prime did feature a mouth but these were corrected in later releases. 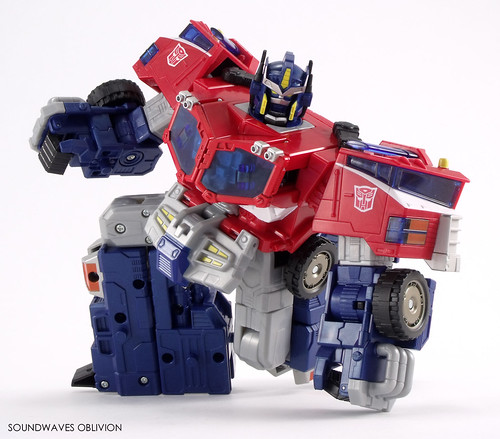 This is also the second Convoy figure with a removable Matrix (the first being Beast Wars Neo Big Convoy).  In a fashion that emulates the 1986 movie, the chest windows opening outwards and the inner portion hinges downwards revealing the Matrix. Although it can look clumsy at times the opening fists allow Convoy to hold the Matrix. 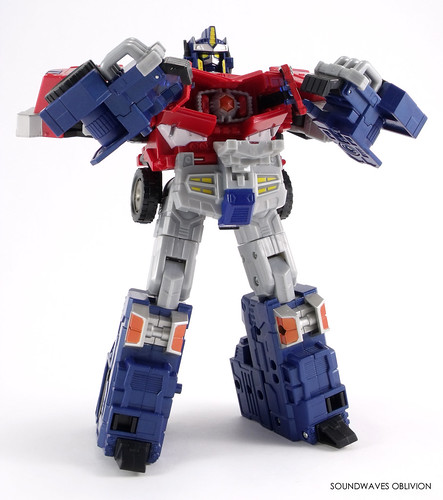 The other accessories that come with Galaxy Convoy transform into a questionable attack base and features ports for the Force Chip which activates lights and sounds. The end of one of the large guns can detach to become Convoy's handgun. 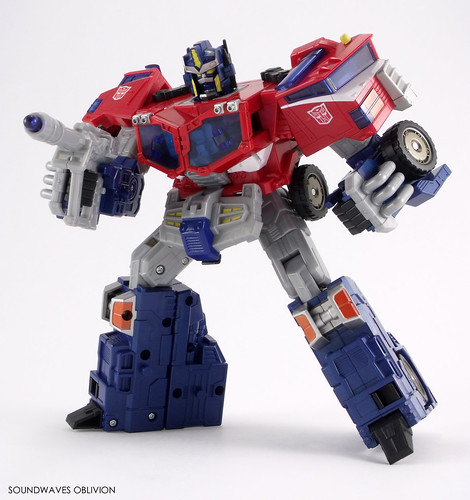 The attack base splits apart and attaches to Convoy to form the super robot and the overall look is very well done and could be a homage to God Ginrai. The large cannons on Convoy's back can be positioned pointing upwards or rotated forwards to be held by Convoy, combined with the leg guns make this Convoy very imposing. 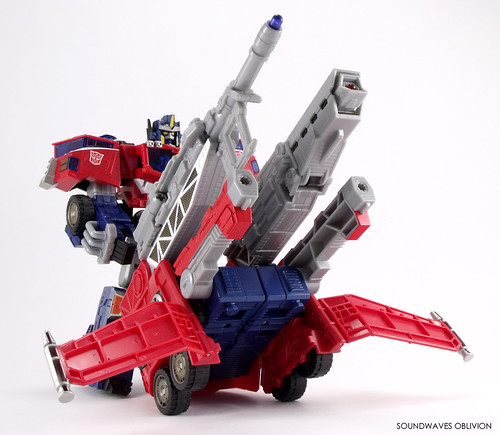 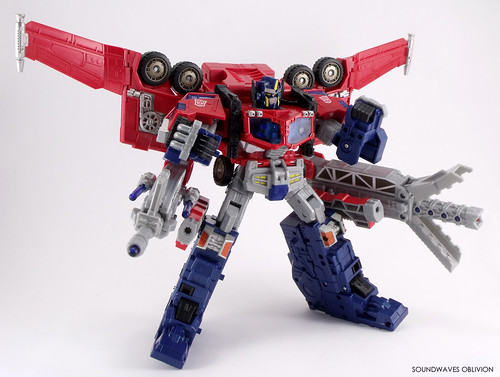 Not to be outdone with combining gimmicks, Galaxy Convoy can combine with two of his team, GC-16 Liger Jack and GC-22 Sonic Bomber. 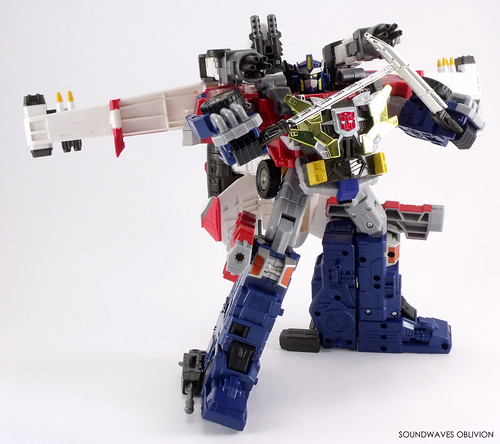 Liger Jack transforms into a questionable arm and combines with Galaxy Convoy to form Liger Convoy. 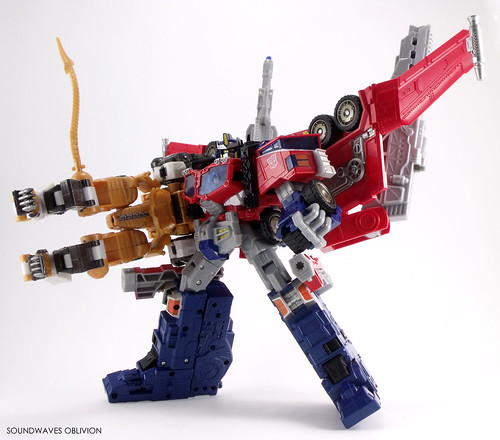 Sonic Bomber on the other hand is additional armour for Convoy. Replacing Convoy's winged "backpack" with Sonic Bomber forms Sonic Convoy. An exclusive toy of Sonic Convoy was released by Toys R Us on the 27th October 2005. In this set Galaxy Convoy was mainly moulded in a translucent deep red plastic and Sonic Bomber featured a different colour scheme. The set also came with a "Coby Exclusive Rumble" figure which features a new head that had been initially designed for GD-13 Rumble. 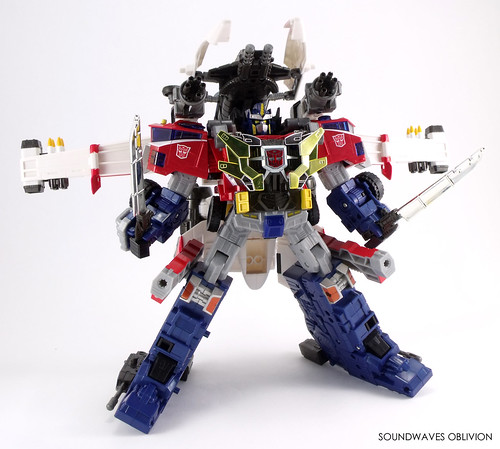 Transformed into vehicle mode, Galaxy Convoy is a futuristic fire engine, although unlike the Car Robots Super Fire Convoy, Galaxy Convoy does not have working ladders with only the large weapons in their place. The vehicle mode holds together well and is impressive looking. There is a second mode which is the questionable flying vehicle mode where the wings at the side of the vehicle fold outwards. 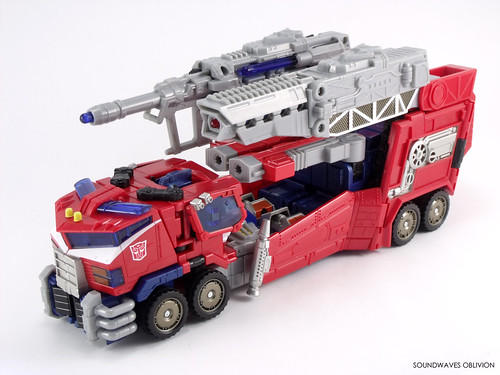 Overall Galaxy Convoy is a fantastic figure and one that still holds up today. 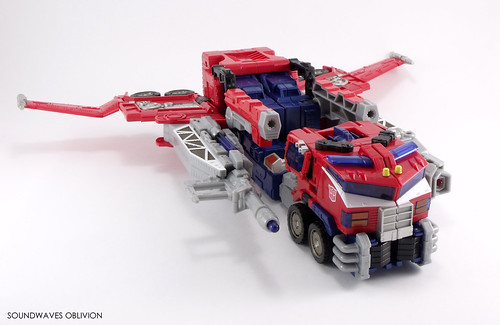