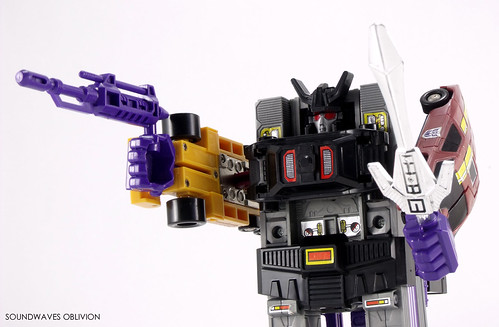 A clanking terror that destroys all in his path - the ultimate Decepticon weapon if he wasn't so confused by the opposing thoughts of the 5 Stunticons who comprise him. (Motormaster is loathed by the other four.) Tremendous strength, his punch has the force of 140 tons. Impervious to most artillery. Uses Motormaster's cyclone gun and carries an ionizer sword with a 50,000 volt charge.
STR…10; INT...3; SPD...2; END...9; RNK...5; CRG...9; FPR...9; SKL...6 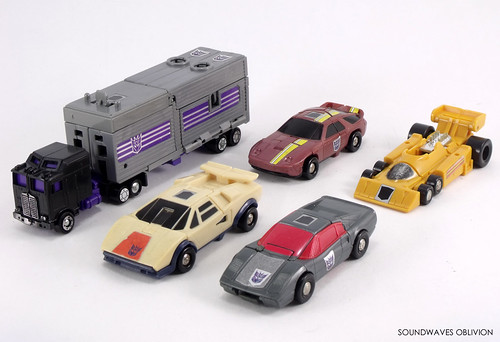 Following on from the success of Devastator, Hasbro pushed the development of combiner robots with Takara for a series of releases in 1986. Rather than opt for using the other existing combiner which would later be Raiden, Hasbro chose to release Takara's "Free Combination" series. Free Combination was going to be a follow on from Diaclone in 1985 until Takara chose to adopt the Transformers and partner with Hasbro rather than just to licence their moulds to the American toy giant. 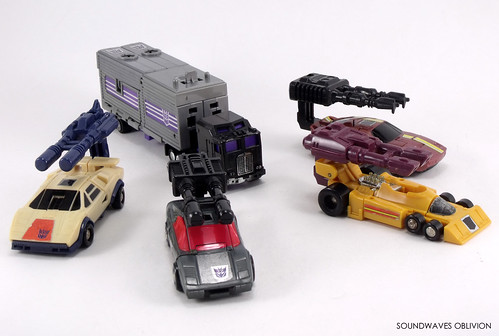 Free Combination was a great concept which worked for the Transformers series. The larger robot could transform into a base mode, vehicle mode and would be the body for the large combiner robot. The smaller robots transformed into vehicles and limbs for the larger robot and they could interchange between arm or leg and they were compatible with any of the larger robots. There was also a large robot who transformed into a city in the Free Combination series, this would later turn into Metroplex. All four of the larger robots base modes could link up with Metroplex's city mode and the smaller robots could also combine with Metroplex's robot mode. 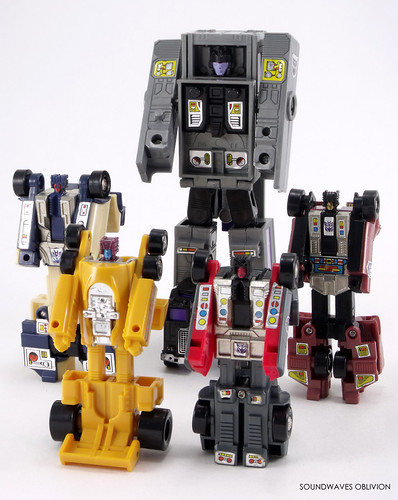 With Hasbro using Takara's older moulds for the 1984 and 1985 toy line, this gave Takara time to finish off developing the "Free Combination" series of four combiners which were released in 1986. Takara also released two animated episodes available by mail order, both entitled "Scramble City Mobilisation". One was an animation combining clips from the earlier Transformers animated series and new animation made specifically for the video. The second episode combined cartoon footage with animated stop motion footage of the toys. Plot wise this was identical to the previous Scramble City episode. 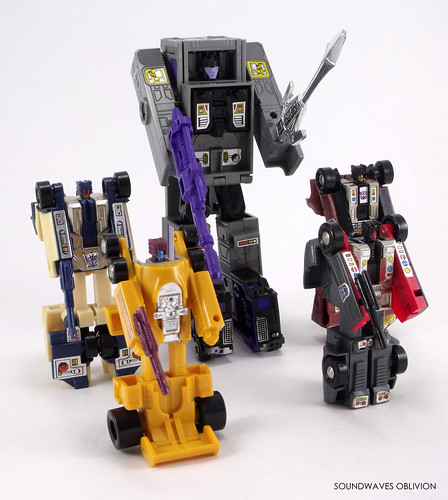 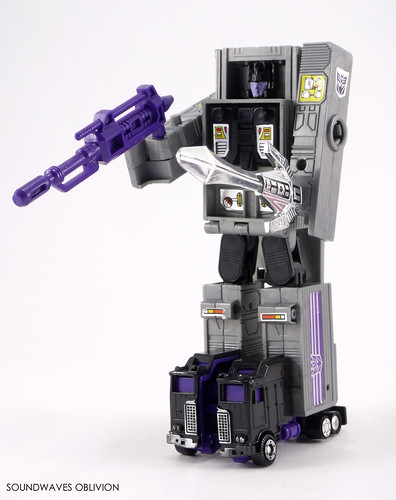 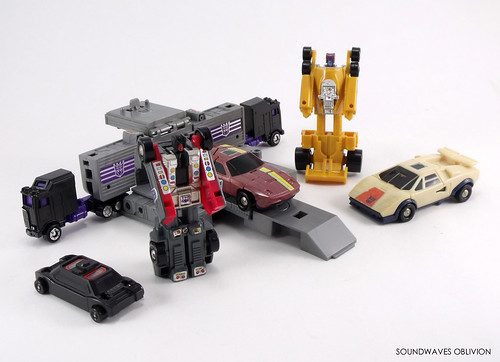 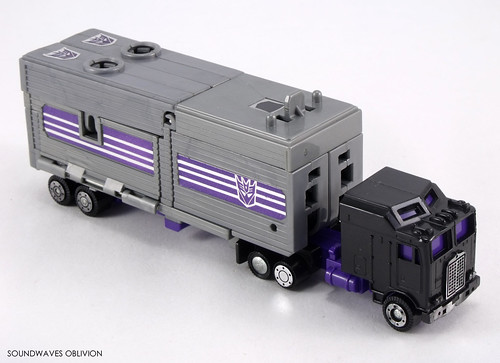 Motormaster is the leader of the Stunticon's who transforms into a tractor trailer and unlike Optimus Prime, the trailer does not detach but becomes Mototmasters body and the cab forms his feet. Motormaster can also transform into a "base" mode which can attach to Trypticon and Metroplex. The Japanese release features a springed launcher to propel the Stunticons from the platform and down the ramp, unfortunately Hasbro omitted this feature, probably down to price? Motormaster also comes with a "Drone Car" accessory which can also roll down the ramp. The drone also doubles as Menasor's chest plate. Motormasters box has photographs of the robot mode in mid transformation to Menasor as the upper legs are angled 90 degrees rather than straight down. The artist must have used these photographs as reference and the box art has Motormaster in this stance as well. Takara corrected the box art for the Japanese release. 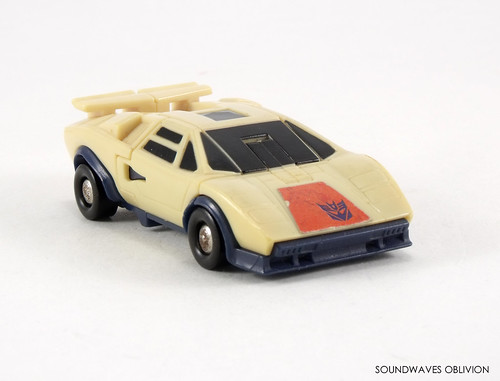 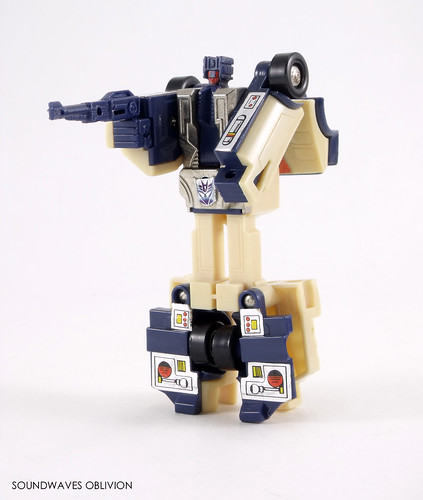 Breakdown shares a vehicle mode with Sideswipe and Sunstreaker and is an unusual beige / off white colour. Maz at TF Square One has a really good article over Breakdowns sticker placement and also includes photographs of Ras' pre-production version of Breakdown featuring the initial roof design closer to the actual car model. Click here to read the article. 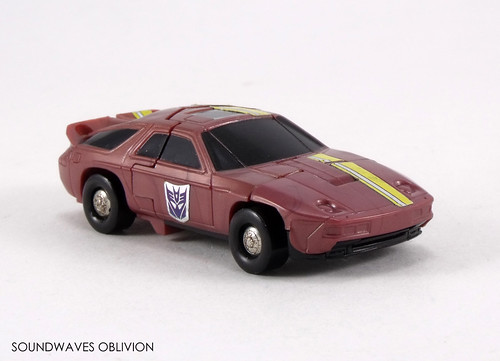 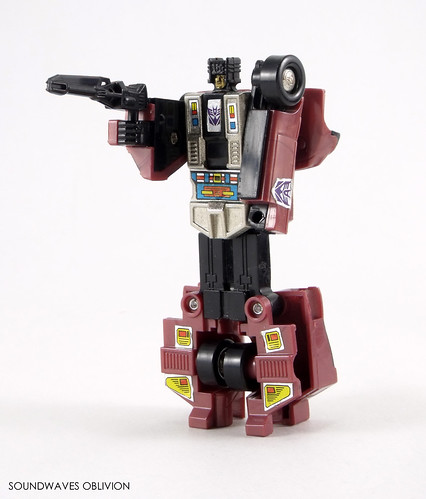 Dead End transforms into a Porsche 928 and although a different mould from Breakdown he shares a transformation. We even saw a new version of Dead End in the Binaltech series in 2004, this time turning into a Dodge Viper SRT-10 with a very Sunstreaker-esq looking robot mode. Click here to see the Binaltech series. 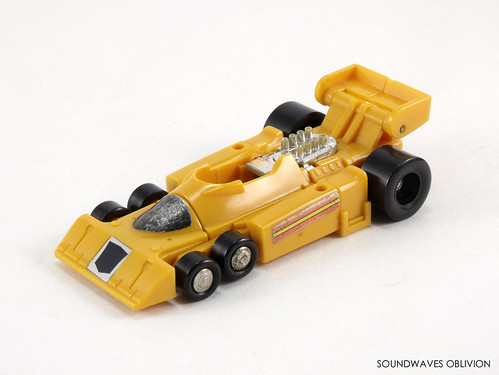 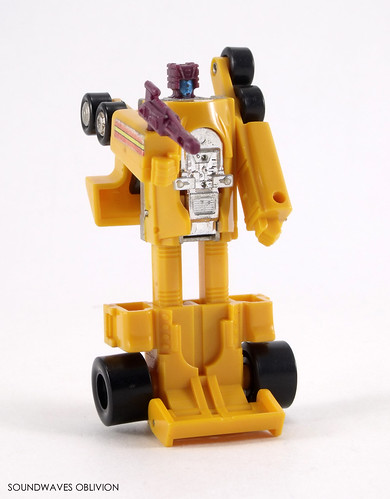 Drag Strip transforms into a yellow Tyrrell P34 6 wheeled Formula One car. The colours and stickers have no likeness to the real world car Drag Strip is based on; incidentally Maz over at TF Square One completed a write up over the correct sticker placement for Drag Strip. Click here to view. To promote Hasbro's "Classic Heroes" reissues or gold card reissues in the UK in 1990, Firefight and Drag Strip were available as mail away figures. You had to cut out several coupons from the Cereal box and send off with an order form where you could choose either or both Transformers, also cut from the box, with money for postage to receive the figures. The figures came in a clear plastic bag. 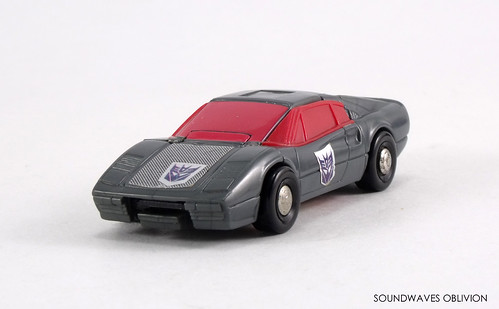 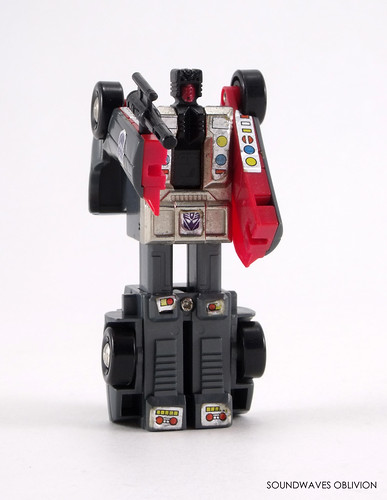 Wildrider transforms into a grey Ferrari and for a long time was the only Stunticon I owned that I bought from a white elephant stall, minus weapons. He is completely different to Drag Strip but the transformation is very similar. When Wildrider was reissued in Europe on the gold card in 1990, his name was changed slightly to "Wild Rider". Digressing slightly, BT-16 Wildrider was also supposed to be in the Binaltech series as a repaint of Alternators Decepticharge, however due to an issue with his name he was changed into the Beast Wars character Black Widow. Still this never happened and Black Widow was replaced in the line up by BT-16 Skids in 2005. The intended mould was finally released in the tail end of 2008 as BT-21 Arcee. 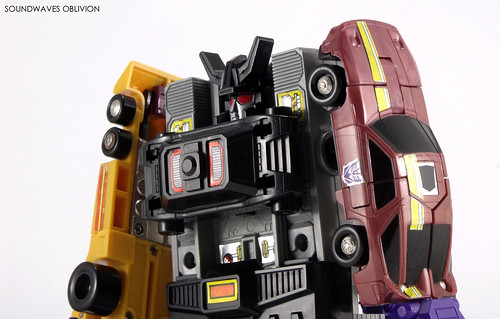 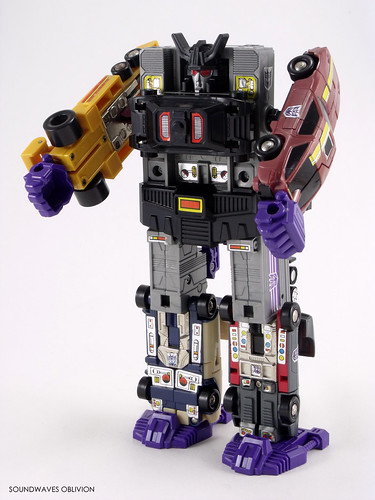 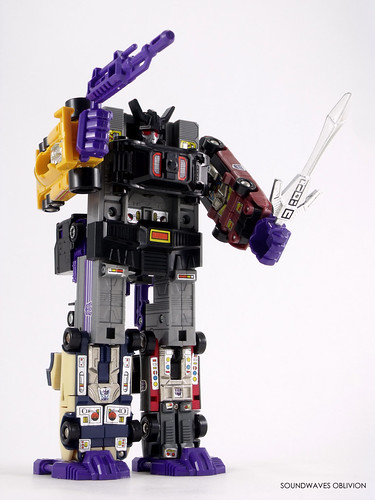 All 5 Stunticons unite to form Mensor who happens to be the second shortest G1 combiner (next to Monstructor). Mensor is very boxy in appearance and holds a long purple gun and chromed sword. Menasor has a really nice face sculpt which is really a "mask" that sits over Motormaster's face. Although the Stunticons can be either arm or leg the usual configuration sees Drag Strip as the right arm, Breakdown as the left arm, Dead End as the right leg and Wildrider as the left leg.

The Stunticons are a really nice set and the smaller cars are detailed enough and if the right size to be mistaken for Matchbox / Corgi cars.

Touched upon in my Scramble City article, the Stunticons were initially designed to be a part of the "Free Combination" toy line, a continuation of the Diaclone series. In early material the line was also called "Scramble Combination" as seen in the image below which also shows hand painted prototypes of what would become Metroplex, Superion, Menasor and Defensor. In typical fashion, "Bruticus" is blacked out as it was still under production.


The below black and white images are prototypes of the Stunticons being developed for the Transformers series. Note the head sculpts are very similar to the cartoon.