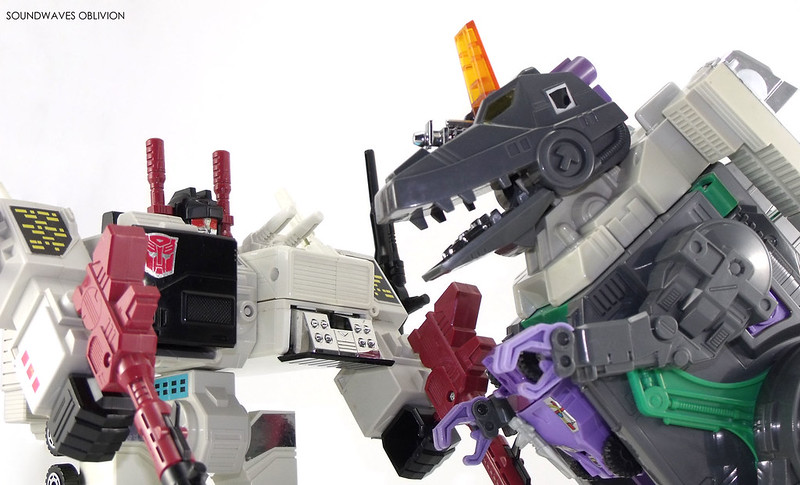 There were several new toys designed for a new Diaclone sub-line which were supposed to be released in 1985 but after Hasbros success with the Transformer line when it launched in 1984 Takara dropped the Diaclone line and Transformers debuted in Japan in 1985.

The cancelled Diaclone line would have been called "Free Combination" featuring a transforming city, and four teams of combining robots.


By the end of 1985 Hasbro had used most of the back catalogue of Takaras Diaclone and Micro Change toy lines, however in 1986 they released the figures which were meant for the Free Combination toy line - Metroplex, Superion, Defensor, Bruticus and Menasor. The previous combiner teams released in the Diaclone line (Devastator & Raiden) could only combine in a set format; these new combining teams had a large robot for the body but the smaller robots which turned into limbs could interchange with each of the larger robots as well as being able to be the arm or leg, so you can create a variety of transformations. This gimmick has been revitalised with Hasbros 2015 "Combiner Wars" toy line.

While Metroplex, Superion and Defensor were on the Autobot side, Bruticus and Menasor joined the Decepticon ranks. To balance out the Decepticon side, one of the new moulds released in 1986 was Trypticon. Like Metroplex he had a city mode and a battle station mode. Additionally he was motorised and could walk in robot/dinosaur mode. Motormaster and Onslaught can join up with Trypticon in city mode but this seems more an afterthought. There are two "connector" accessories which attach to Trypticon to allow Motormaster and Onslaught to connect.

Email ThisBlogThis!Share to TwitterShare to FacebookShare to Pinterest
Labels: Article, Generation One, The Transformers