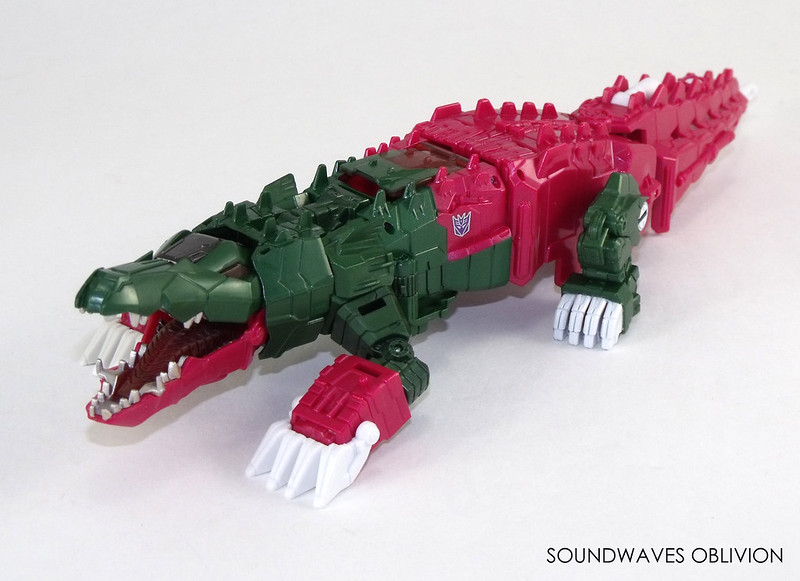 (Profile Translated from the instruction manual)
LG-22 Skull
Swamp Warrior
Profile
If one word represents Skull, it’s “hooligan”. To stop his rampages, Wipe is occasionally forced to put him to sleep with hypnotism. His steel jaws are incredibly strong, being able to tear through any metal; his partner drone Butler is always close by to provide dental maintenance. Butler also has a special ability to use captured Head Masters to transform into a dinosaur mode.
STR...10; INT...8; SPD...3; END...10; RNK...5; CRG...9; FBL...5; SKL...6 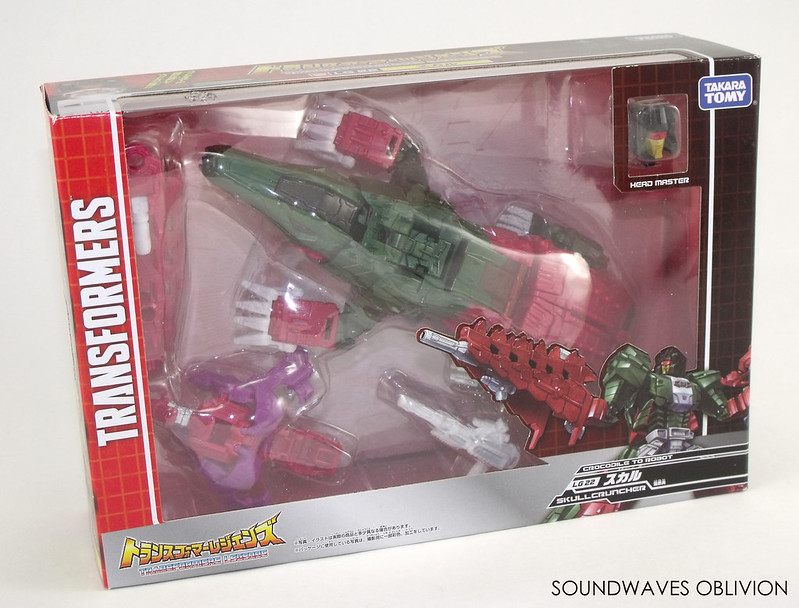 LG-22 Skull like many of the Legends figures features two names on the packaging; in English he is named Skullcruncher, in Japanese text he is named Skull. Skull is based on the 1987 Headmasters cartoon version and comes with a different head than Hasbro's version. 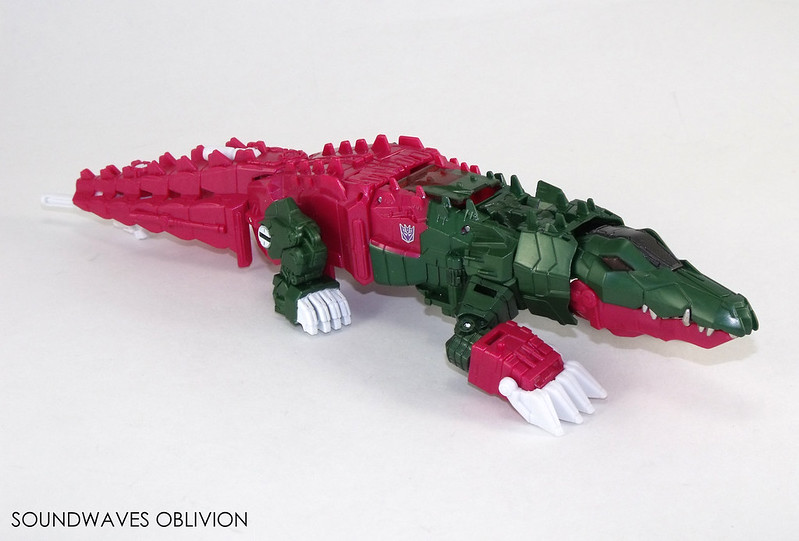 In alligator mode Skull is quite poseable because of the head and opening jaws. There is a section in the alligators back where the Headmaster sits with a soft plastic door. Due to the soft plastic however, the door will not close firmly. 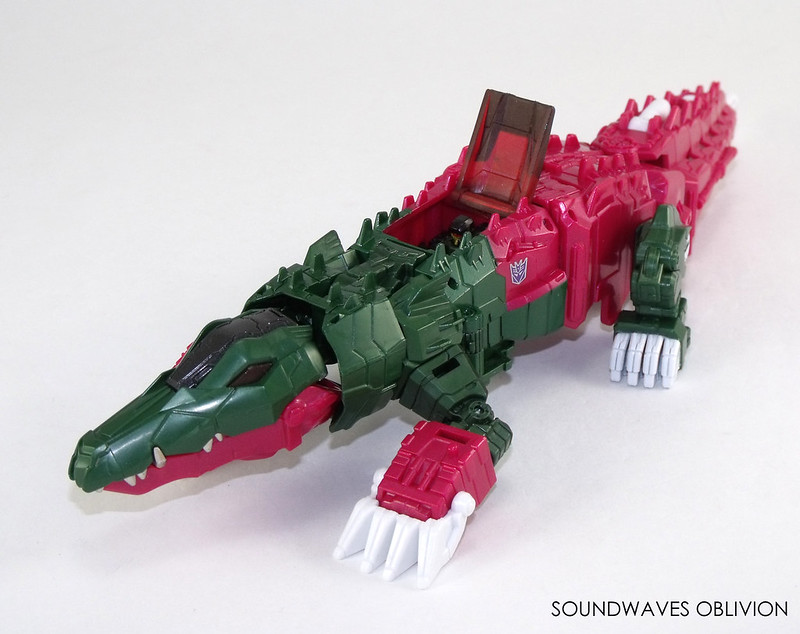 Robot mode is a very faithful representation and update of Skull from the cartoon, however this is the only positive in robot mode. I'm aware of loose legs with the Hasbro version, my version doesn't have loose hips but the thighs are loose enough to make it struggle to stand upright. The right forearm also has a habit of popping off when you turn it which unfortunately is part of the transformation, the left forearm has no issues. 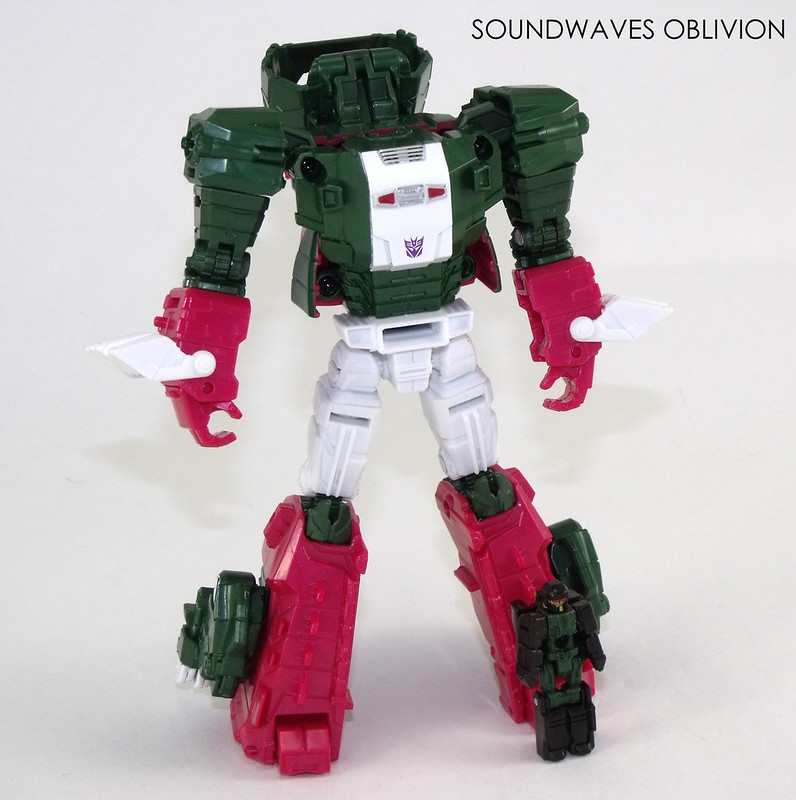 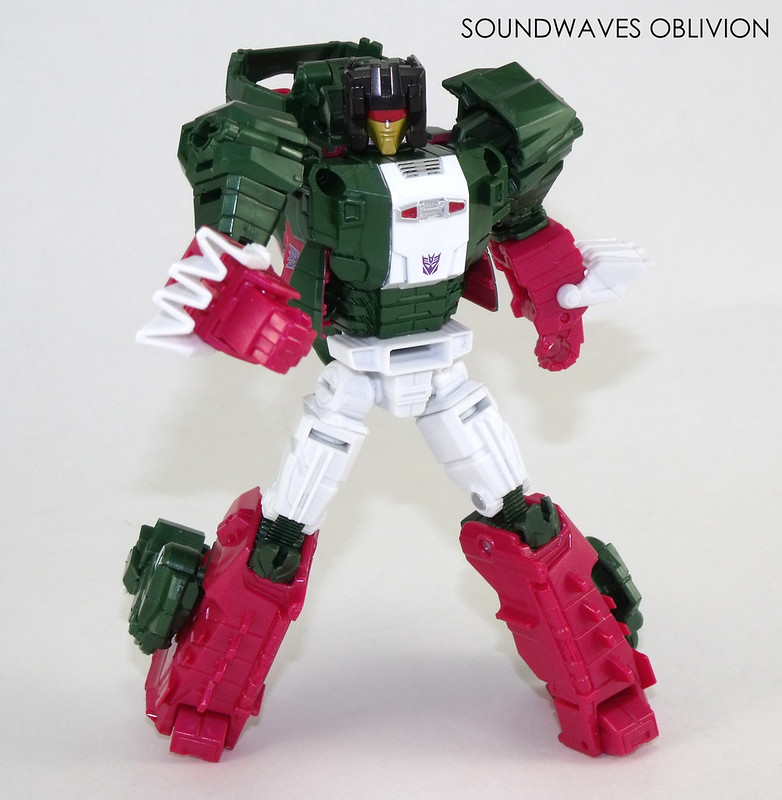 Accessory wise Skull comes with the small white gun from the original G1 version and the purple tail now can form an extended gun or shield rather than the sword of the original. Skull also comes with an additional figure, a repaint of the small dragon which came with Hasbro's Crashbash (aka Squeezeplay) Titan Master. The Dragons name is spoken as Batora but means "Butler". 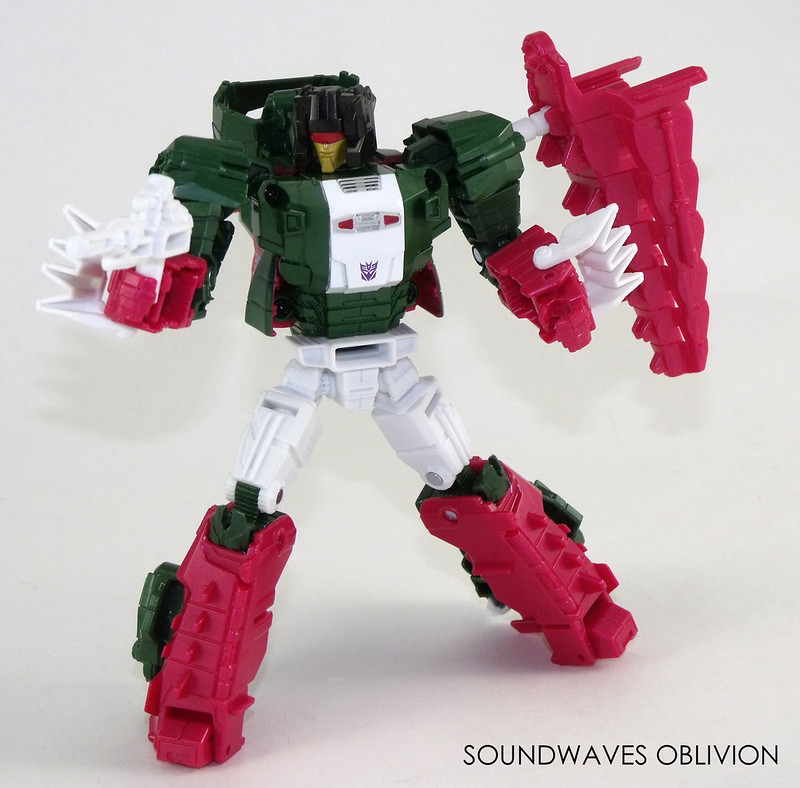 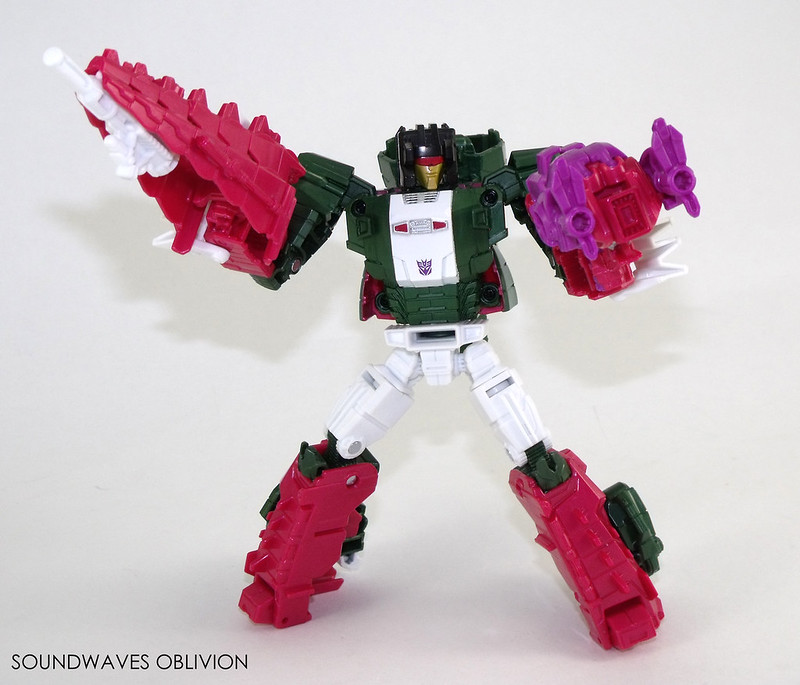 The issues with my figure make this a hard one to recommend, however if yo want to collect the set it may be best to keep to the cheaper Hasbro version. 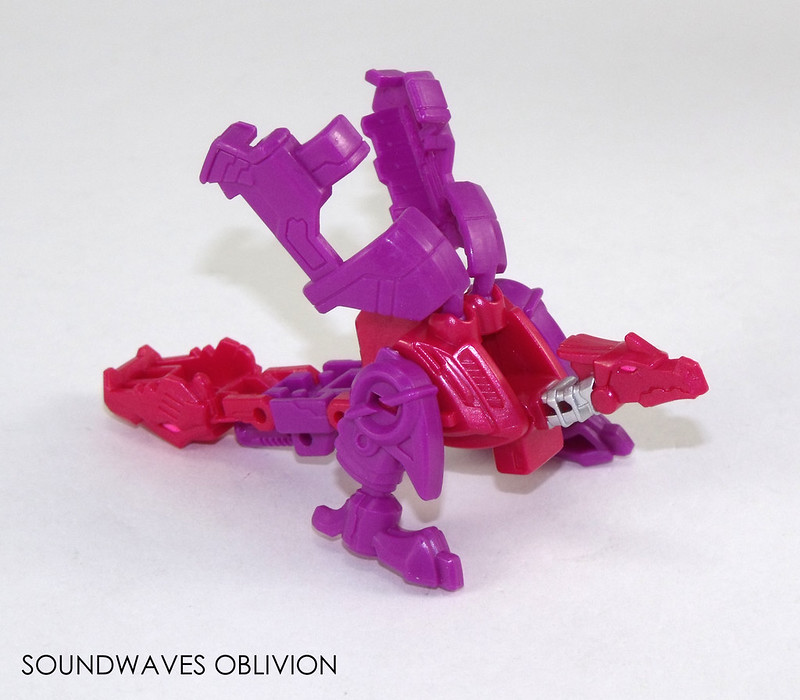 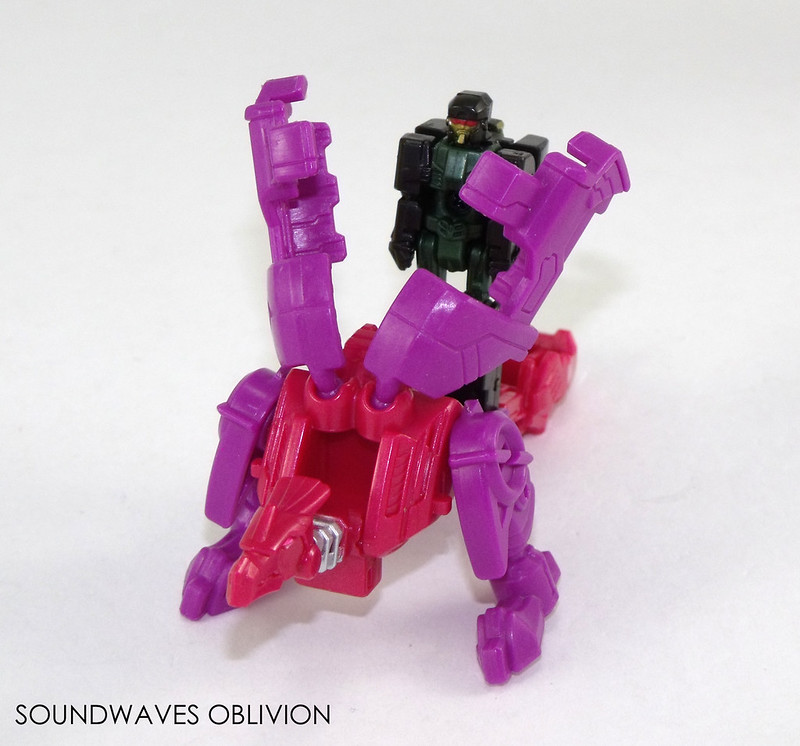 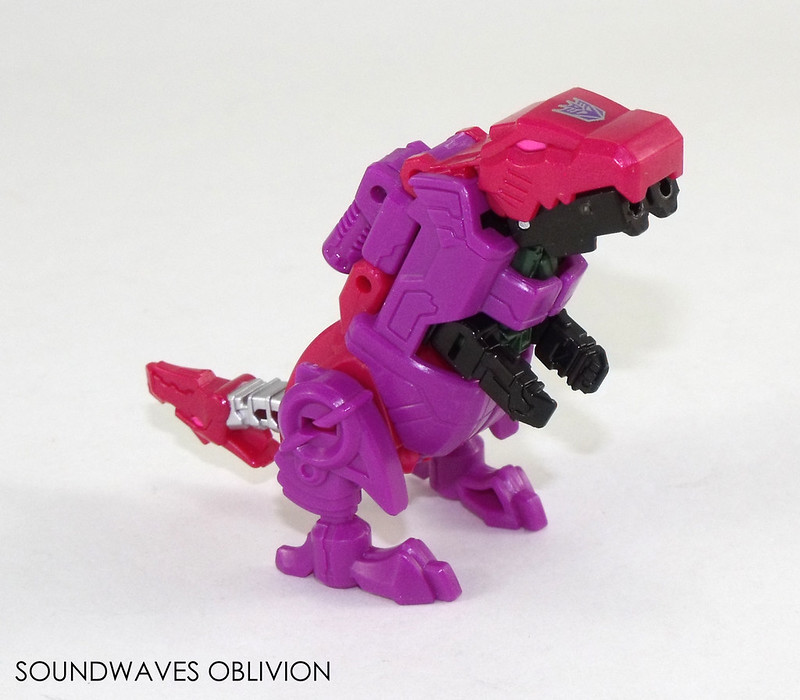 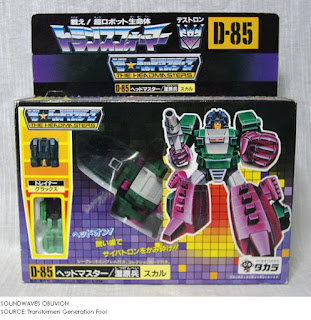