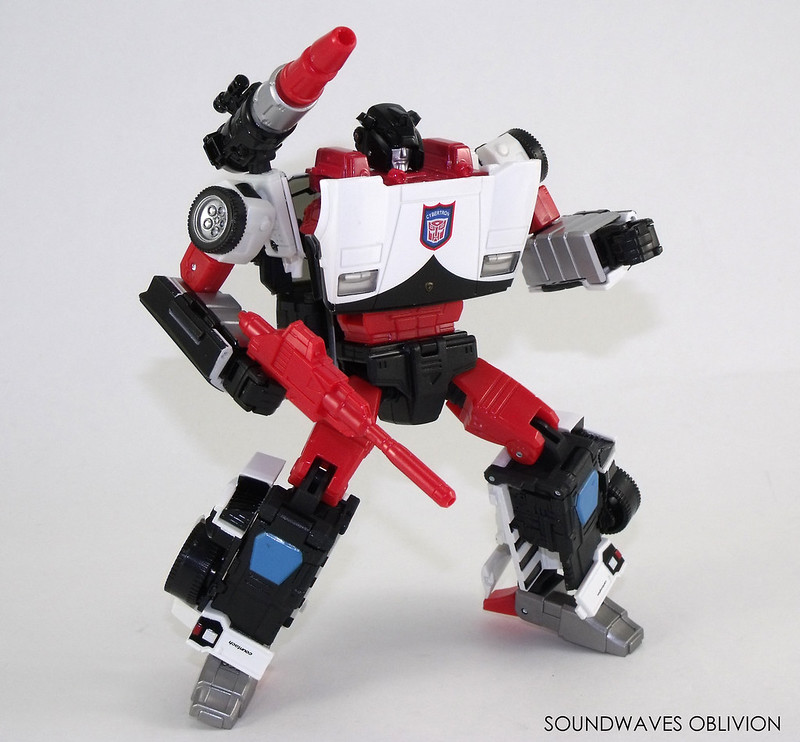 Profile (Translated from the Trading Card)
MP-14C Cybertron Police Officer / Clampdown
Function: Police Officer
Motto: “Without law, authority is powerless.”
Profile:
A robot policeman dispatched from Seibertron to an Earth police facility through an interplanetary talent exchange program. Cooperating with human partners, every day he devotes his efforts to the safety of his region. Unsophisticated and kind-hearted, he cracks down on vicious crimes with a firm manner. Now and then he'll butt heads with the locals or his co-workers owing to differences in culture or moral concepts.
STR...9; INT...7; SPD...9; END...6; RNK...5; CRG...8; FBL...6; SKL...7 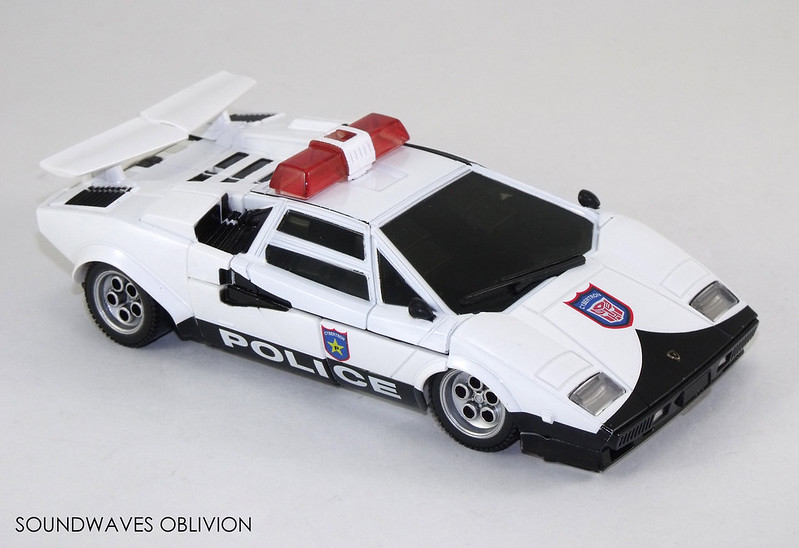 Much like the e-Hobby reissue, Masterpiece Clampdown was released as an exclusive for Takara Tomy Mall in December 2015 and was limited to 2000 pieces in Japan. This time around Clampdown is a repaint of (Red) Alert, rather than the other way around with the G1 Red Alert originally being a repaint of the Diaclone New Countach Police Car. 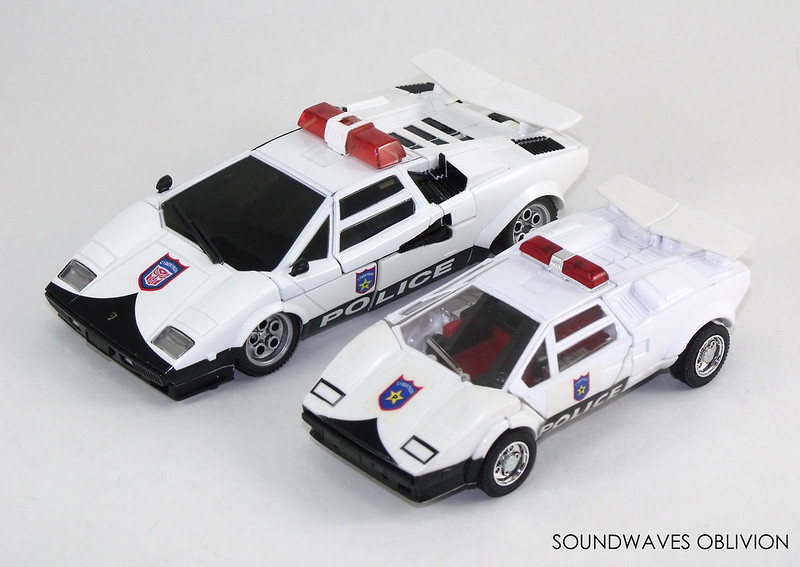 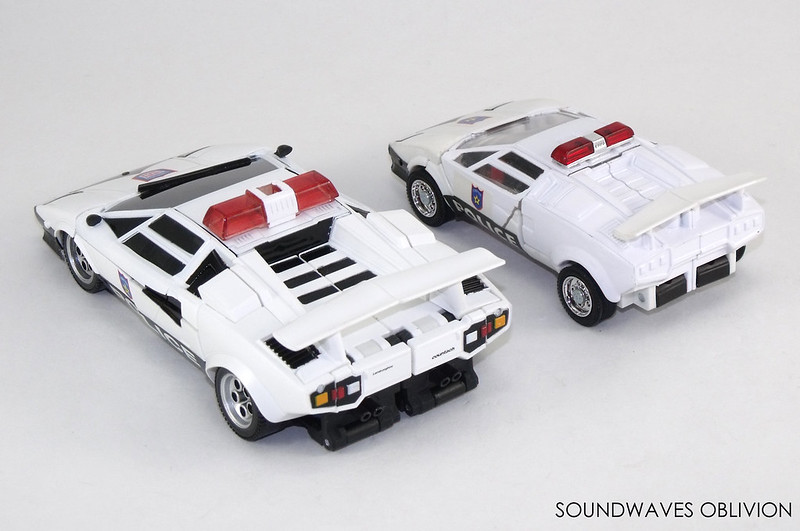 Masterpiece Clampdown is a faithful reworking of the e-Hobby version; on the police badge on the car bonnet and doors, the "P" has been replaced by the Autobot / Cybertron logo as well as the name "Cybertron" at the top. 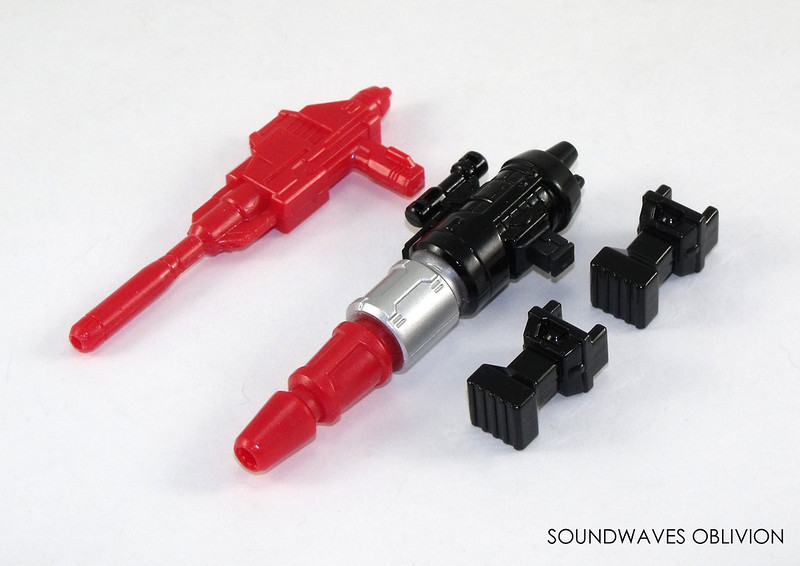 Although a repaint of Alert, Clampdown comes with the same accessories as MP-12 Lambor (Sideswipe); the missile launcher, gun and two new pile drivers which plug in over the robot hands after they have been retracted. These pile drivers are painted glossy black and are longer with the end of the pile drivers featuring ridges rather than a flat surface. The gun unfortunately refuses to to be gripped by the fist, it will stay in place with the fist closed but it wobbles about. Maybe with a future Deep Cover repaint, this may be rectified - there has been at least one Masterpiece Countach released every year since 2012, so maybe this year in 2017?). 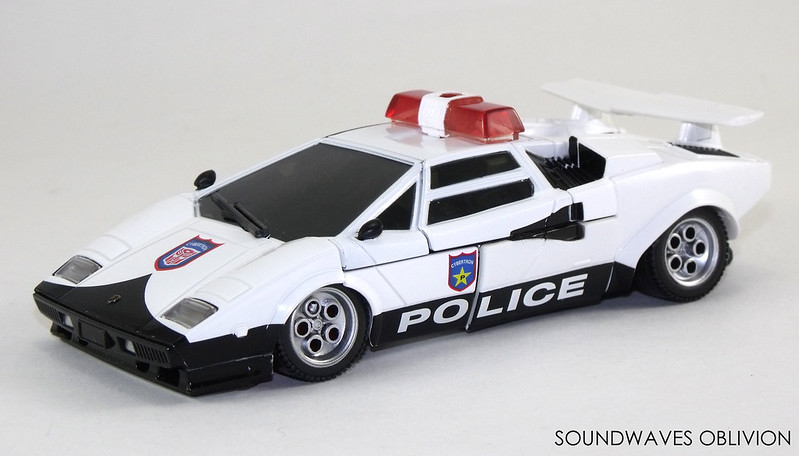 Vehicle Mode: Lamborghini Countach LP500S (Translated from the instruction pamphlet)
On Earth, Clampdown took the form of a Lamborghini Countach LP500S in police livery. Affiliated to the human police force rather than the Cybertron army, he patrols urban areas to maintain the peace. A police car with the beauty but power of a supercar is itself enough of a deterrent to suppress crime. He uses the power of his acceleration to track and capture getaway cars or other offending vehicles. Prior to his arrival on Earth he had frequent run-ins with the Cybertron Warrior Road Rage, a dangerous speed addict on planet Seibertron. After catching a speeding car on Earth and finding it was Road Rage, who herself had been sent to Earth on a mission, Clampdown was disappointed. The no nonsense Clampdown made an effort to understand Earth's culture so Miko, his music loving police partner, played heavy metal on his car stereo but she ended up traumatising him playing it at maximum volume. 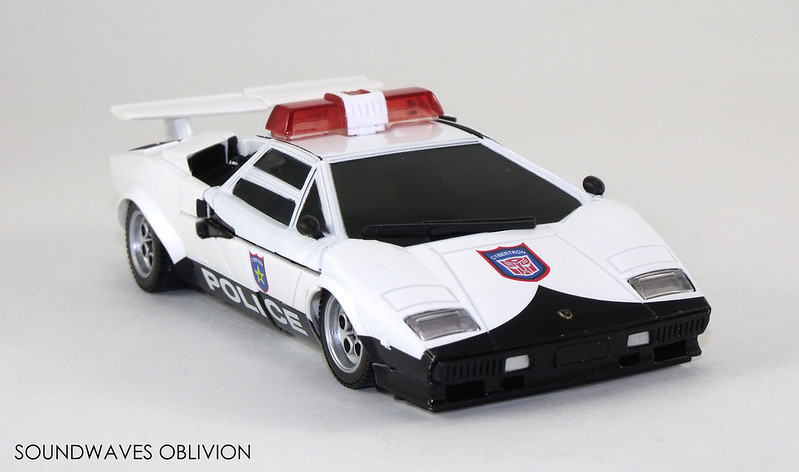 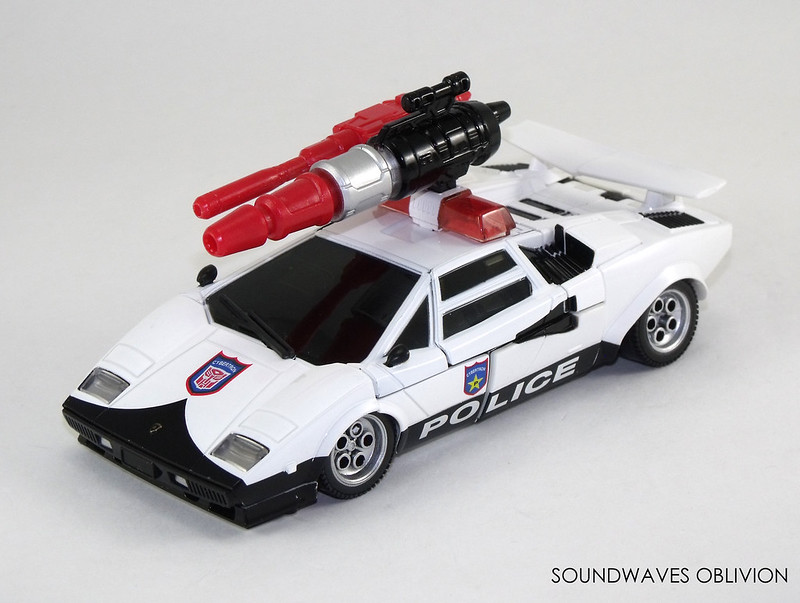 Robot Mode: Clampdown (Translated from the instruction pamphlet)
Function: Police Officer
Motto: “Authority without discipline is powerless.”
Profile:
In 2003 to promote an alliance between the Cybertrons and the humans, Clampdown was dispatched from Seibertron to an Earth police force through an interplanetary talent exchange program. Unsophisticated and kind-hearted, he cracks down on criminals with a determined attitude. Saejima, chief of the Metropolitan Police Department, partnered him with a rookie policewoman called Miko Tezuka. The humourless Clampdown was often swayed by the free-spirited Miko. As time went on he became accustomed to the people around him and began to trust his partner Miko’s ability to act, sense of justice and flexible approach, as she was not bound by discipline or common sense. When the Destrons unleashed the metal eating virus, Cosmic Rust, on the Cybertrons, Clampdown was able to escape as he was not with the Cybertron army. This enabled him to protect Earth in their absence with the aid of his brother Deep Cover and Miko until the Cybertrons were able to recover with the help of the humans. Currently he has returned to rebuild planet Seibertron having finished his exchange program; the memories of Miko and his colleagues on Earth will remain with him always.

Note 1: Miko Tezuka is based on Transformer Prime's Miko Nakadai; "Tezuka" was an early name for the character.
Note 2: The Police Chief Saejima is based on Saejima Juuzou from Brave Police J-Decker. 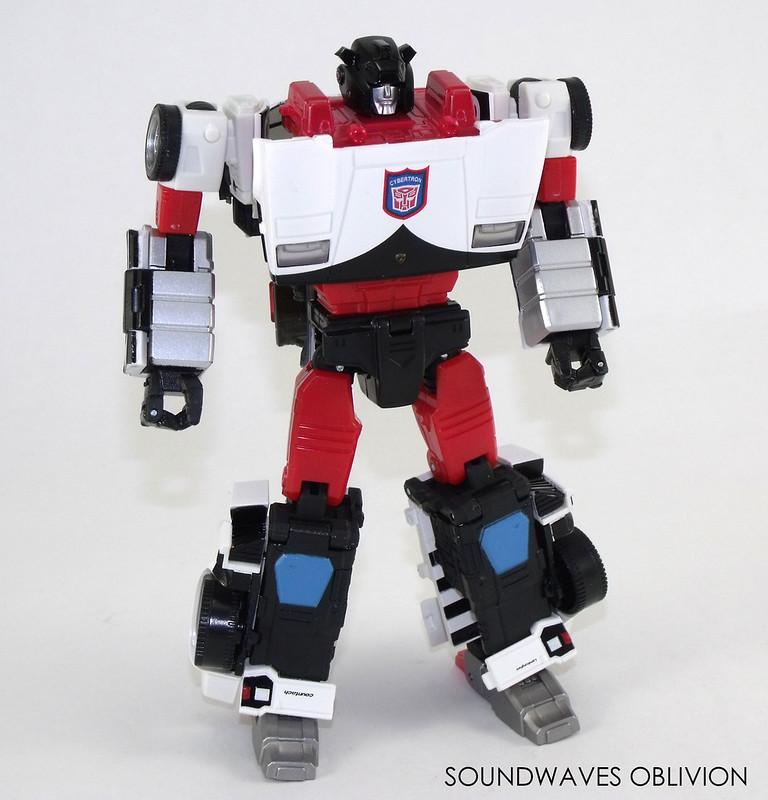 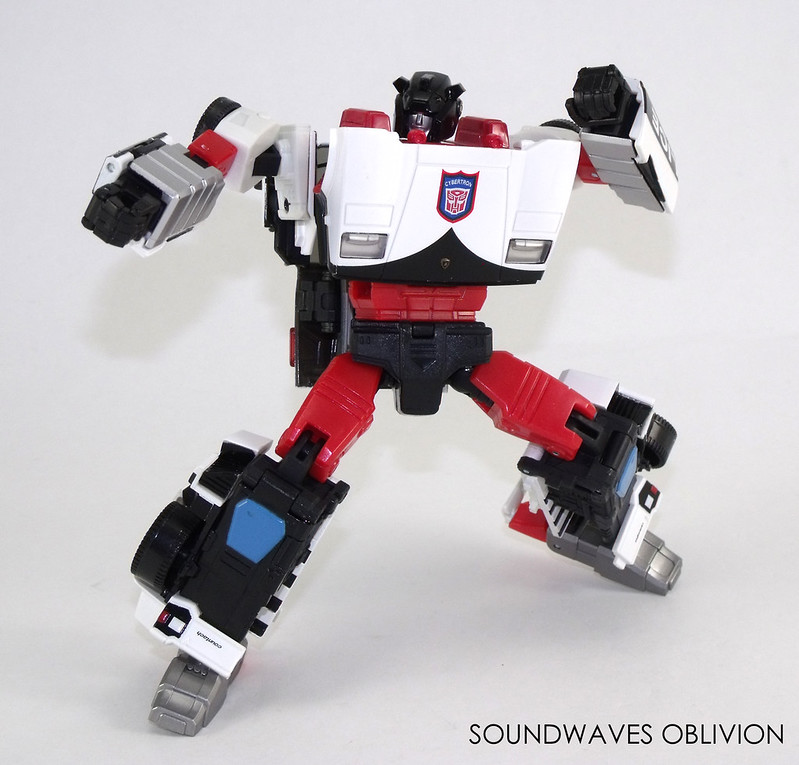 Weapon: Rocket Launcher (Translated from the instruction pamphlet)
A large weapon mounted on Clampdowns shoulder. It can fire live ammunition as well as non-lethal acoustic flash bullets. These bullets emit intense light and sound around the enemy stopping them in their tracks allowing for their swift capture. Clampdown has the skill to fire directly upon the enemy without causing damage to the surroundings. 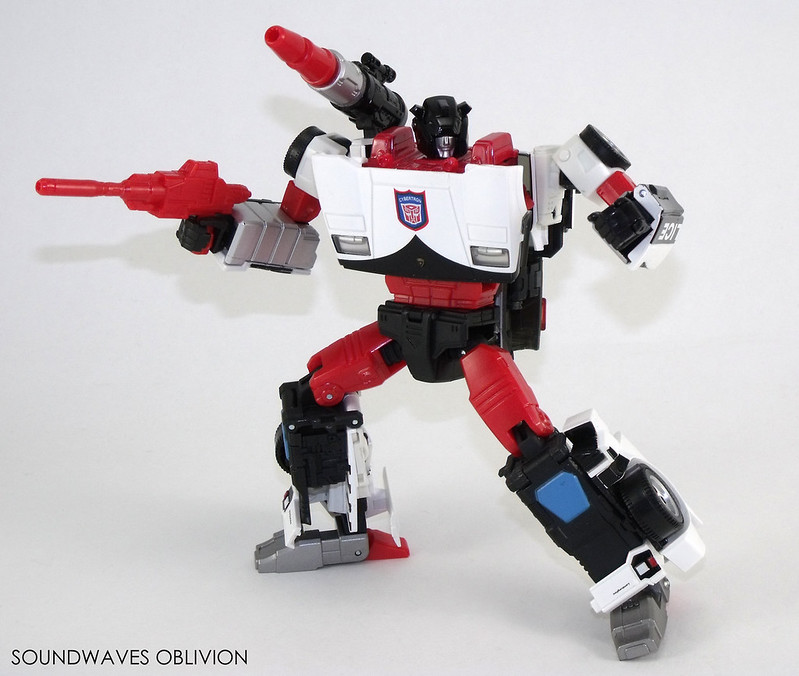 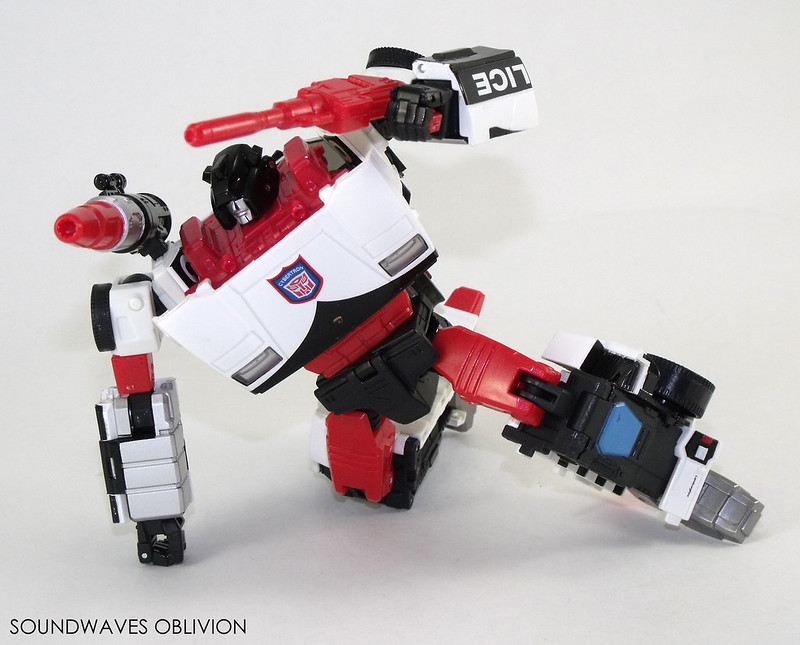 Weapon: Automatic Hand Gun (Translated from the instruction pamphlet)
Clampdowns favourite gun from planet Seibertron's Police Force, capable of discharging live ammunition or laser beams. Although a relatively conventional weapon for the Transformers, on Earth Clampdown is able to demonstrate his skill, helping to suppress and deter violent crime. 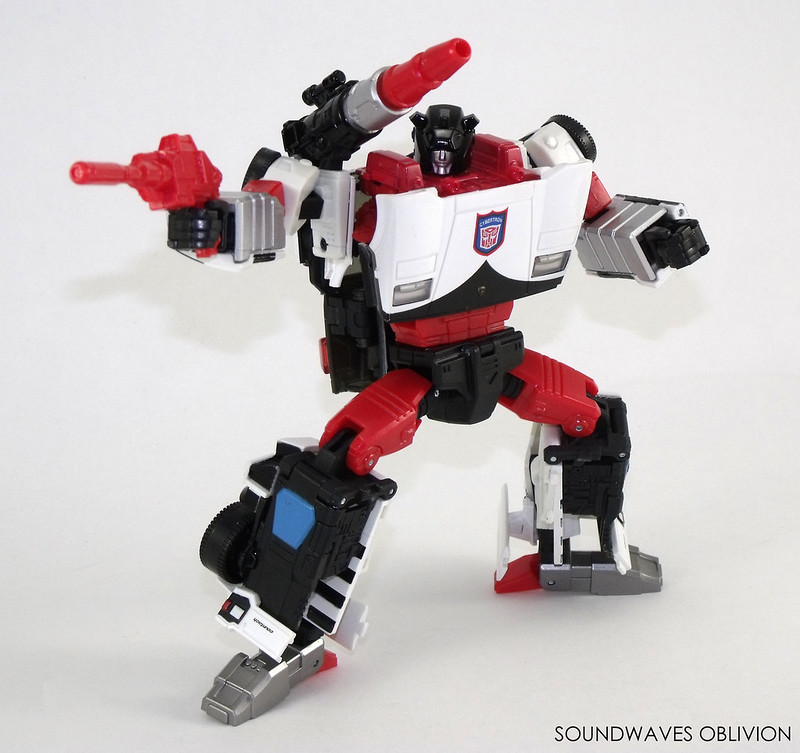 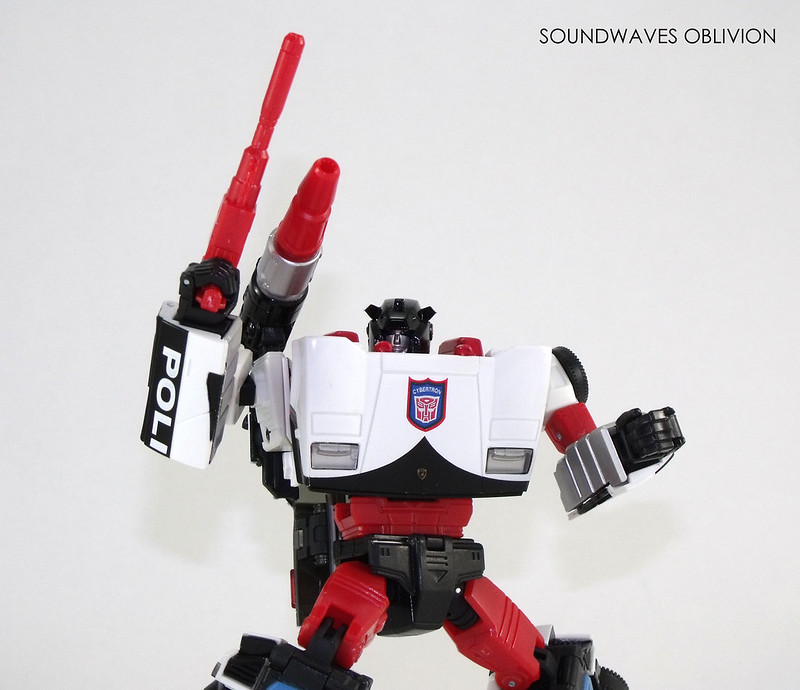 Weapon: Pile Driver (Translated from the instruction pamphlet)
For particularly vicious robot criminals, Clampdown is adept at hand to hand combat called Diffusion allowing him to subdue and arrest the villain. Clampdown changes his arms into pile drivers then he uses the enemy's’ momentum to create a gap between them and he bombards the enemies’ body. The force given to the enemies’ body has enough power to temporarily paralyse them. 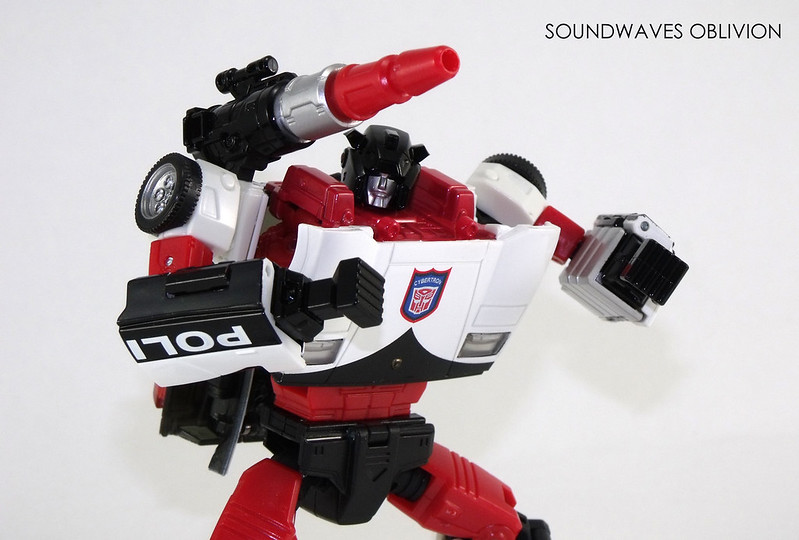 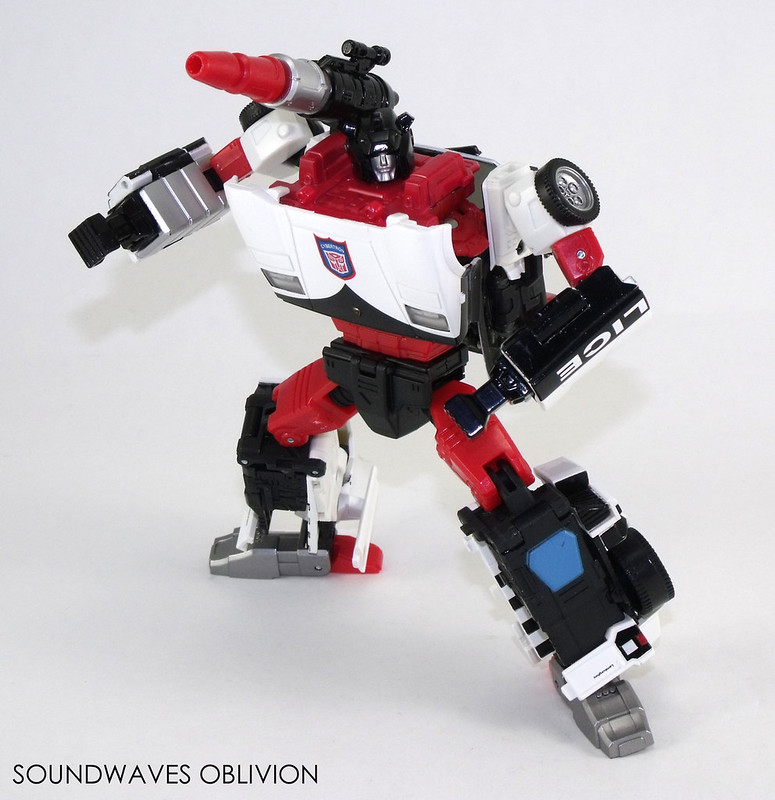 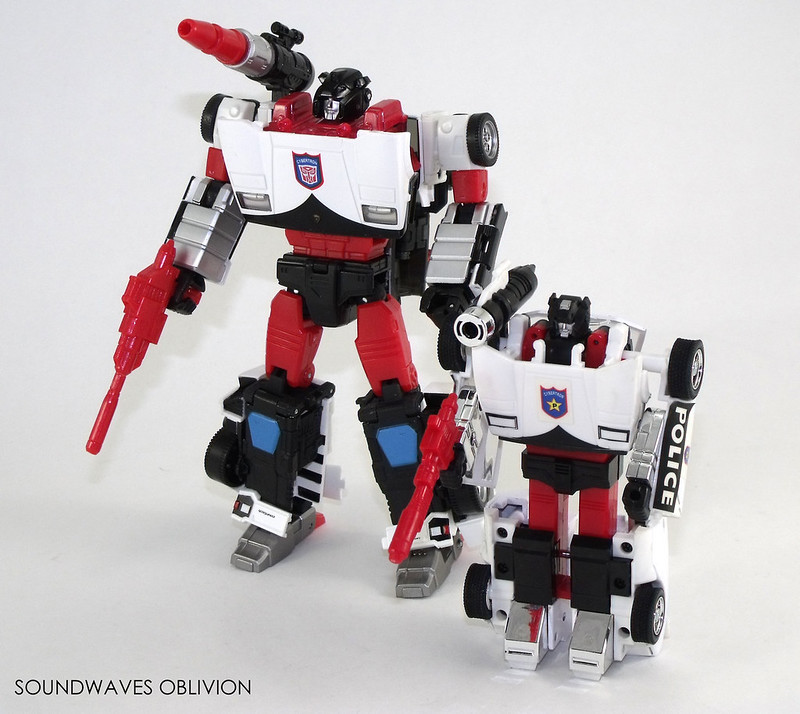