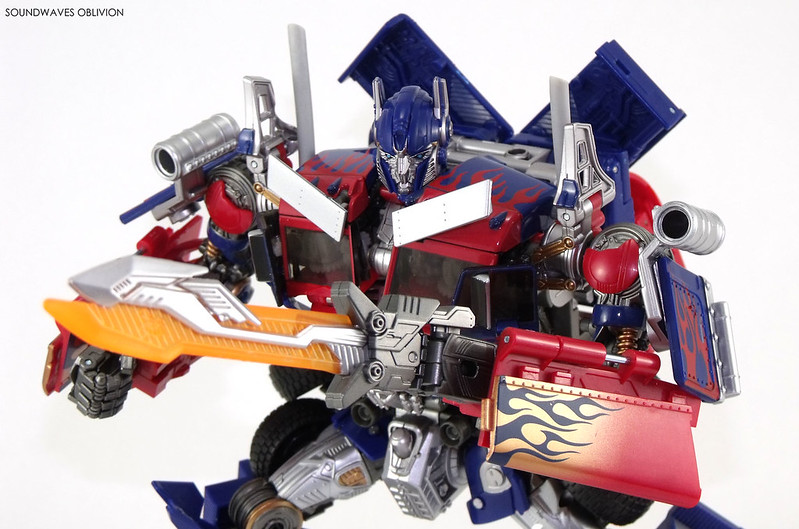 In April this year, Hasbro Asia released a second leader class Optimus Prime in their "Asian Premium Series" APS-01U Optimus Prime Ultimate Edition. I wouldn't say it necessarily improves upon the previously released APS-01 Striker Optimus Prime; it is different enough with darker colours and it comes with all the accessories which have previously been available with this figure as well as a few new accessories and a big price tag. 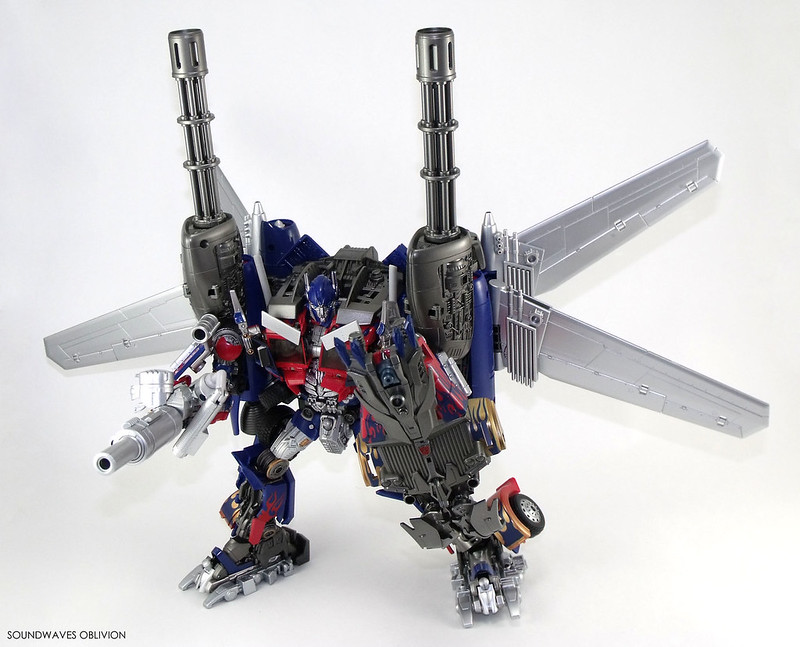 If I'm not mistaken this is the 16th release of the "Revenge of the Fallen" leader class Optimus Prime mould and yet I can't see any degrading of the mould which has been evident in other toys released time and time again like the G1 Combaticons with the Encore Bruticus release. 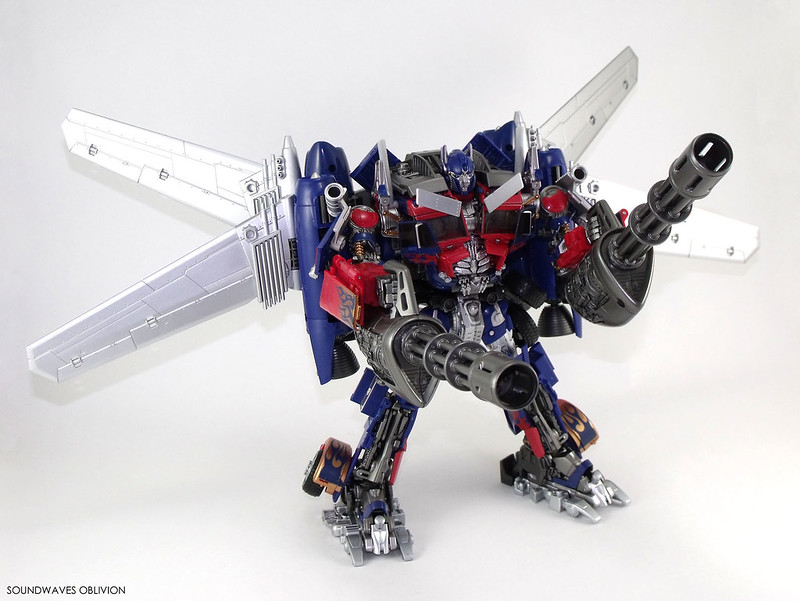 This is also the 4th Jetwing Optimus Prime released which is based on the third movies appearance in "Dark of the Moon". This mould was already a huge improvement over the leader class figure from the first film but Takaras release of DA-15 Jetwing Optimus Prime tweaked the design. Gone are the annoying flip out swords which were forever getting in the way as well as limiting articulation and the chest has been remoulded slightly in the style of the film. 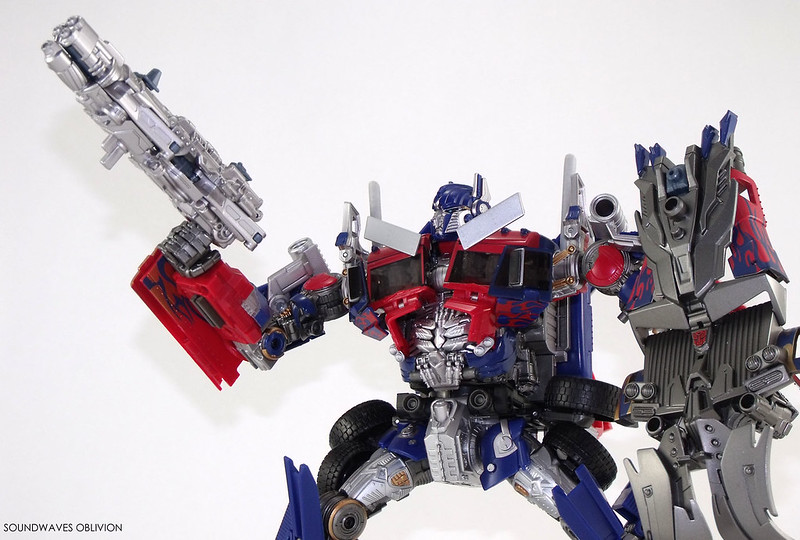 This Ultimate Edition Optimus Prime is based on Jetwing Optimus but it also comes with the accessories of Takara Tomys DA-28 Striker Optimus Prime. As well as the additional accessories, to set it apart from the previous Premium Series Optimus, this version has a darker colour scheme with additional gold detailing which I would say does suit the figure in my opinion. However this time round there is no chrome detailing on the vehicle grill or cab windows. This doesn't take away from the figure as the replacement silver paint works just as well plus there is no danger of getting the chrome scratched seeing as the majority is on the underside of the robot mode feet. 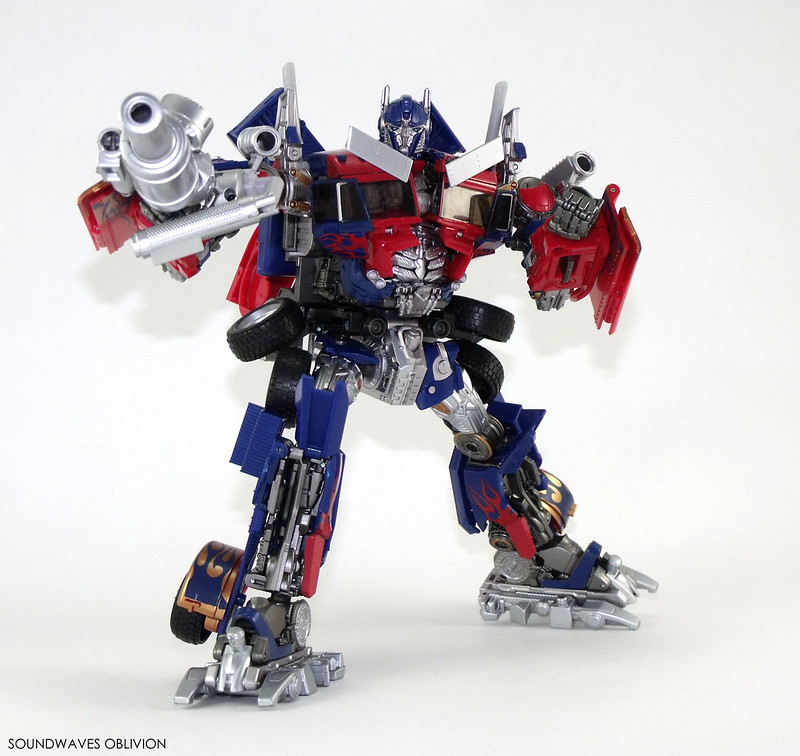 The robot head uses the version without the face plate which was first seen on RA-15 Buster Optimus Prime, and the blue paint on the eyes is a nice touch. As with the other versions of the figure this also features Peter Cullens voice saying "We must stop the Decepticons!" 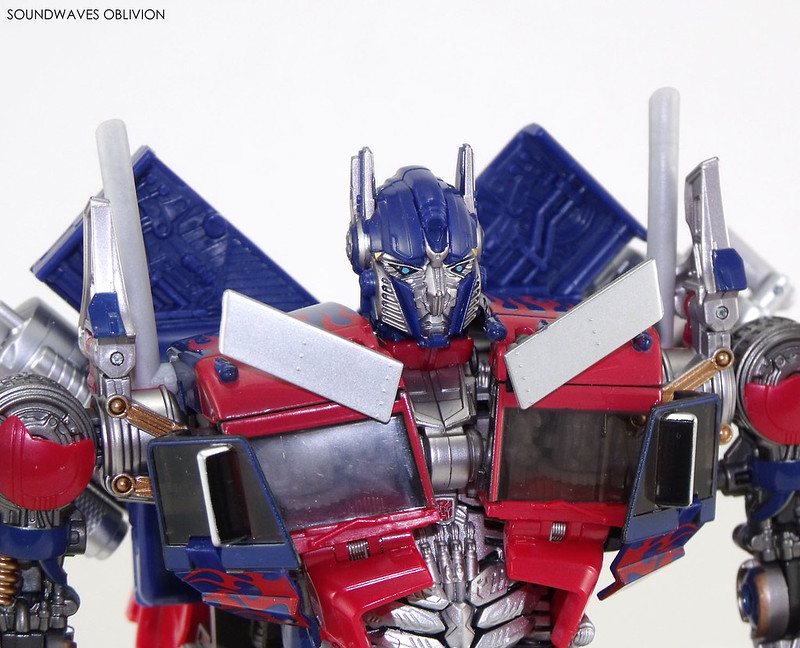 The main feature that sets this apart from previous releases are the articulated hands. This mould was originally going to have articulated fists however this was dropped when the figure went into production. While it does look good the downside is the weapons look limp when being held and they aren't as fitted as with the previous fists (at least in my version they are). 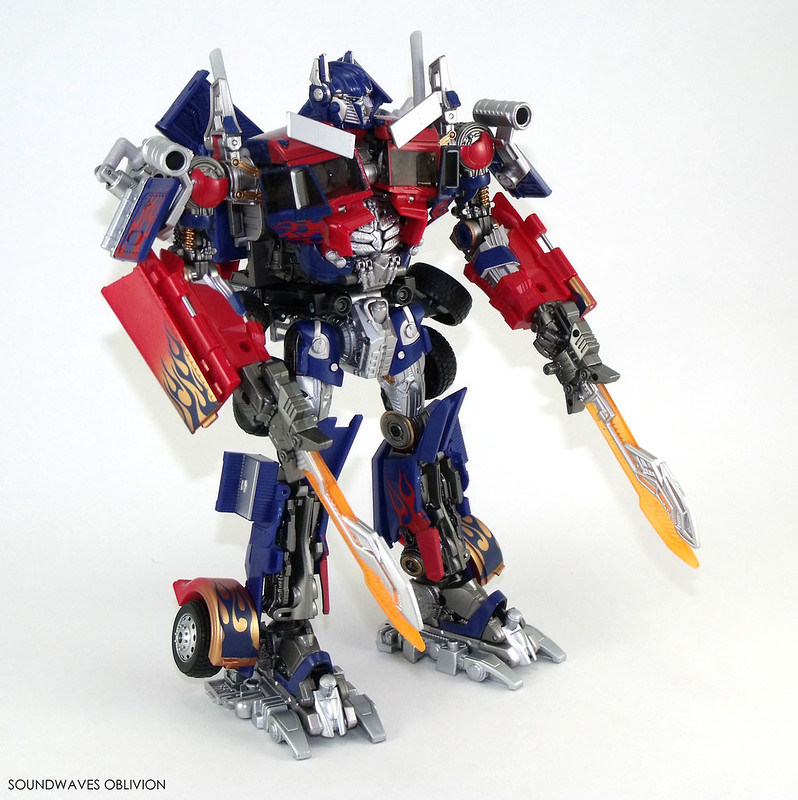 Another minor gripe with this figure is the Buster Cannon. The figure comes with the fuel tanks detached and trying to attach one of them in particular is not an easy task. Once they are both on, they aren't going anywhere. Trying to remove them to make the Buster Cannon is a feat in itself. They are so hard to get them back off you feel like you are going to damage the figure which you certainly don't want to do given the price of the thing. Given that most collectors would keep this in robot mode anyway its better to keep the fuel tanks off the figure. 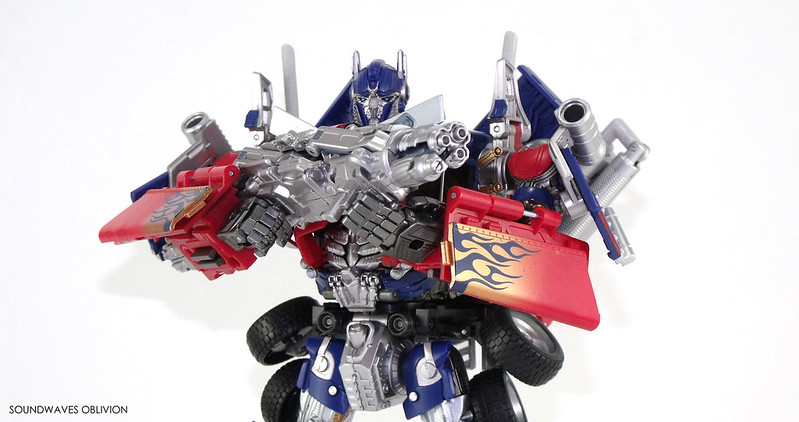 Though not part of the overall set, this figure is given away with a small and detailed diecast metal version of the Allspark as seen in the 2007 film which you can fit in Optimus Primes hands. 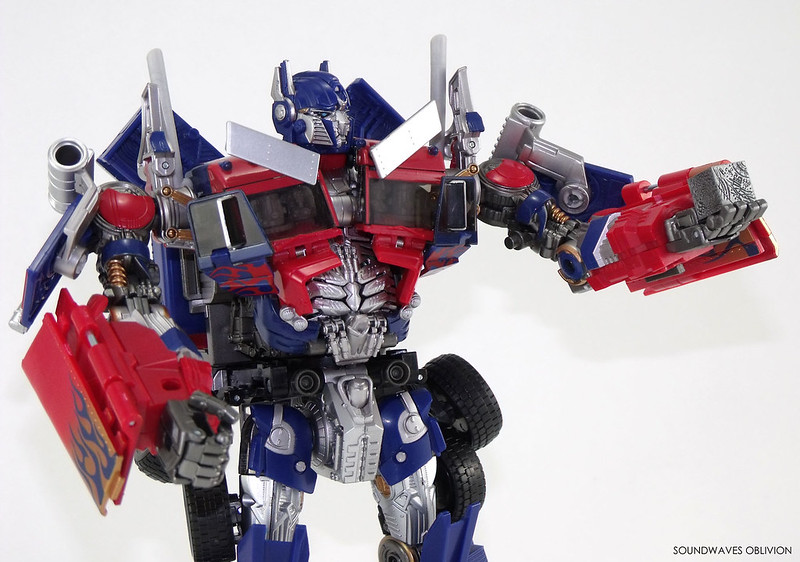 Overall because of its price tag I can't really recommend this figure; it does look good but you can have as much fun with cheaper and earlier releases of the mould. 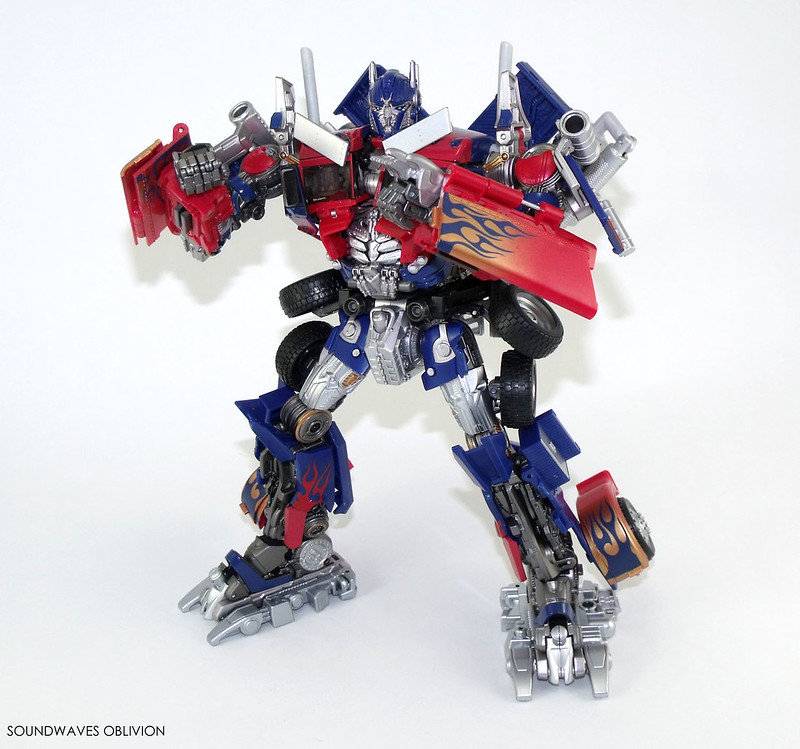 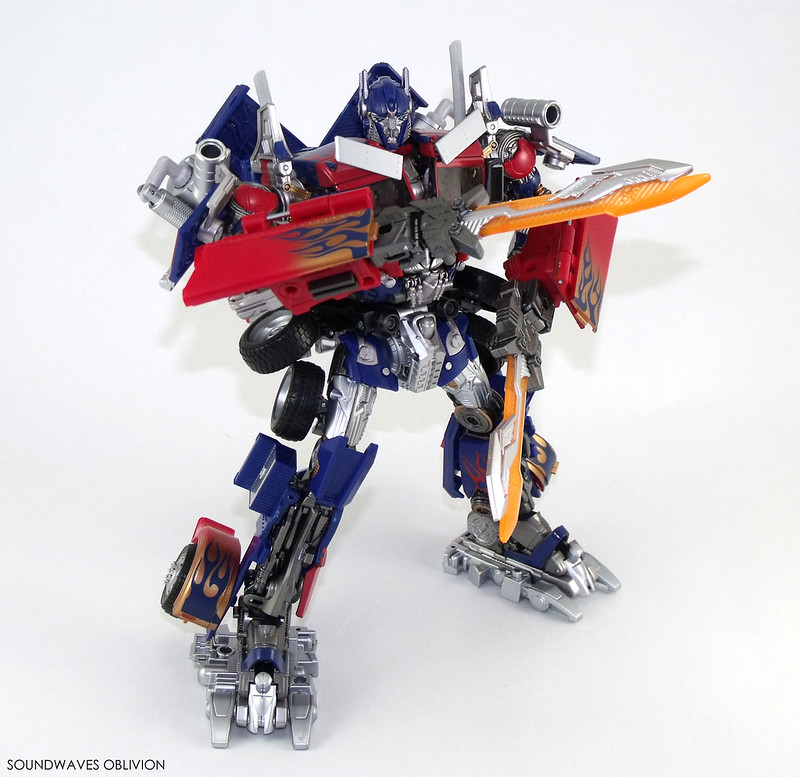 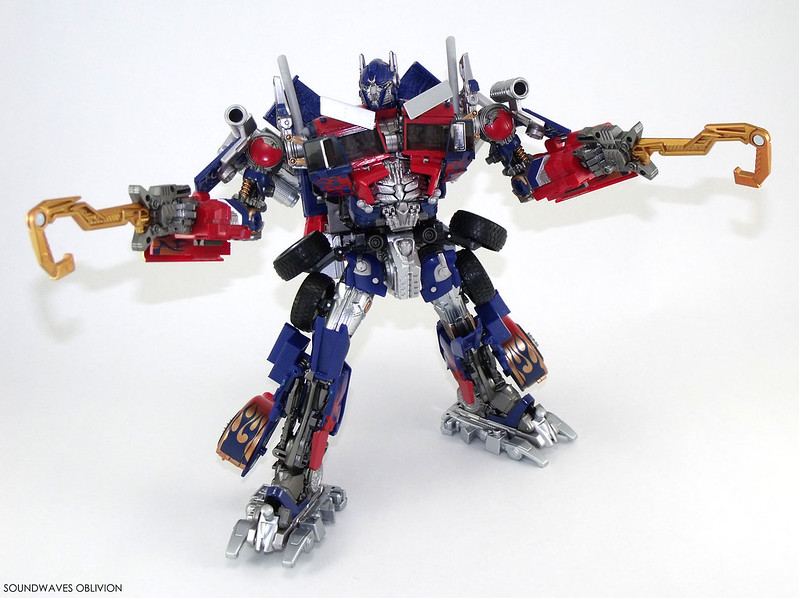 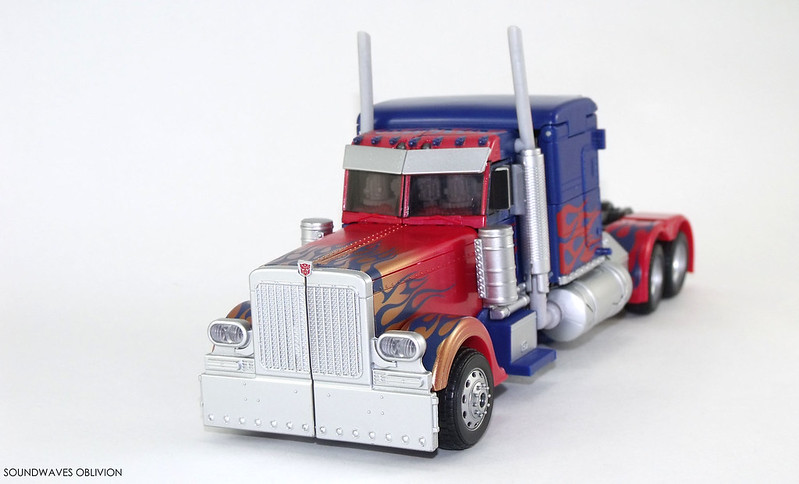 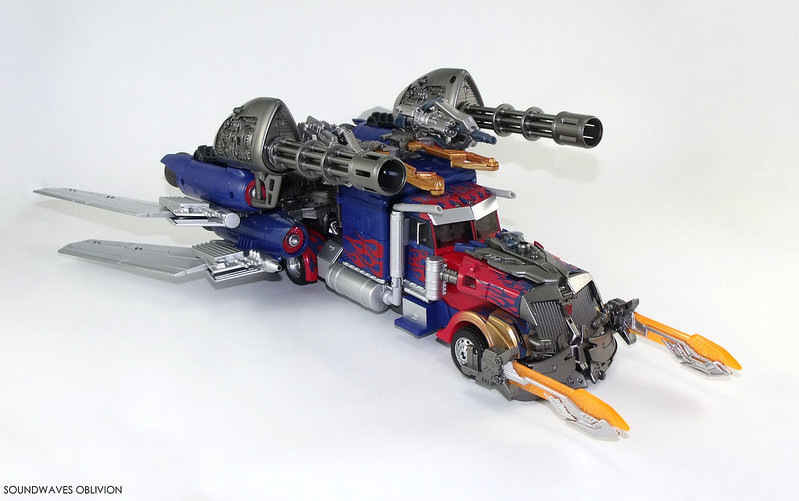 Brief pictorial history of the mould: 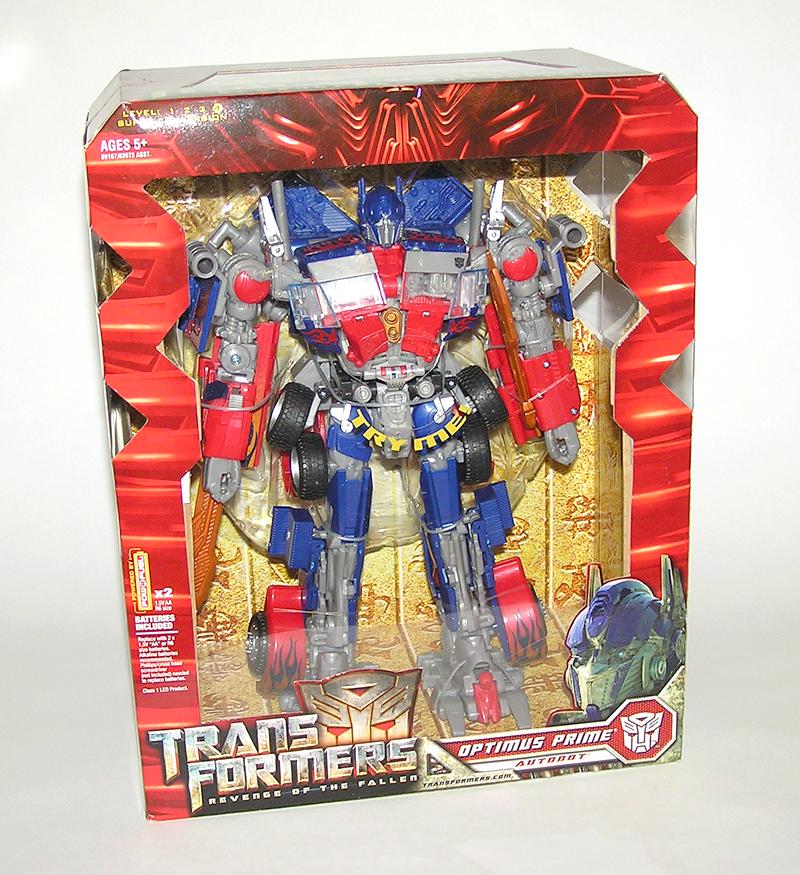 The original release of the mould which improves on the version released for the 2007 movie. Early production versions of this figure featured articulated hands which can be seen on the back of the box artwork. This figure features the voice of Peter Cullen saying "I am Optimus Prime"; for European releases this was shortened down to "Optimus Prime". During transformation when connecting / disconnecting the waist section to the rest of the body the classic transformation sound plays. There are no weapons which come with this figure though there are 2 flip out swords which just tend to get in the way rather than add play value. This figure can also combine with Leader Class Jetfire for an interesting backpack look. 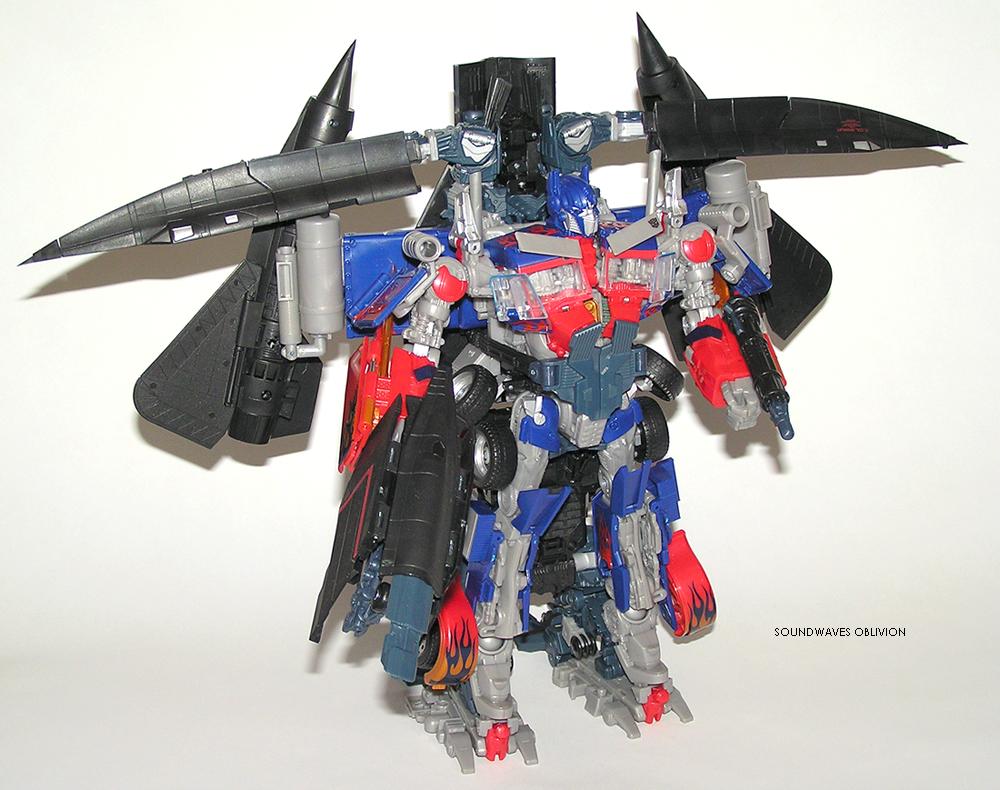 A Walmart exclusive which sold for the same price as a Leader Class figure. The only difference with this set is the wider box to accommodate the Deluxe Class Autobot Camshaft figure. Camshaft was previously released in 2008 in the Allspark Power subline from the 2007 movie. There are no additional changes to this figure either.

The initial Japanese release is near identical to Hasbros version. The main change is the plastic connecting the head to the chest is coloured grey rather than red. It also retains Peter Cullens voice saying "I am Optimus Prime."

This is Takara Tomys second release of the mould in the Revenge of the Fallen line and it features a new head sculpt and is now without the face mask; it has a new weapon called the Buster Cannon which is formed from the fuel tanks. As well as these features it has a premium look to it, featuring chrome and silver paint. The flame decals have been given a sharper pin stripe look as well. Nowadays these are very expensive to get hold of. There is a Knock Off version out there which is very hard to tell apart from the original - even when handling the figure in person, though there are a few tell tale moulding differences (shown below). 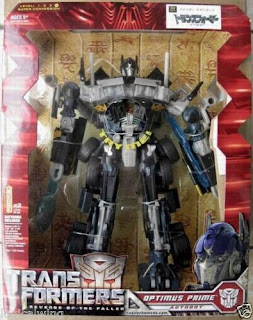 This black redeco was an Amazon.co.jp exclusive which was sold with the DVD / Blu Ray releases of the movie. This is just a straight repaint of RA-01 and features the same electronic sounds. Again there is another Knock Off version of this figure.

This is a matt gold redeco of RA-01 and was offered as a Lucky Draw item in January 2010 edition of Japans TV Magazine (which was out in early December 2009). The figure was limited to 3 pieces and winners received the figures around April 2010.

This clear translucent version of RA-01 was a luck draw item in Japans Family Mart stores. It was not released how many pieces these were limited to, but there were 2000 stores participating in the draws and each store had 2 to give away, so more than likely there were around 4000 produced.

An interesting release, this was an Asian exclusive and though it has Takara Tomy stamped on the box it was not sold in Japan but surfaced in Australia, the Philippines and Hong Kong. Many were put off by the 2009 RA-24 Buster Optimus Prime without the face plate but this figure has reinstated it as well as keeping the rest of the original Buster Primes features. 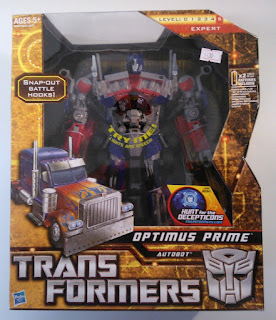 Released in the Hunt for the Decepticons subline, this is a battle damaged redeco of Hasbros original release though this version no longer has the flip out blades but has new flip out battle hooks as seen in the movie. This version also features a new voice clip, again from Peter Cullen, saying "We must stop the Decepticons." There are still some versions however which still say "Optimus Prime."

Hasbro did not reuse the ROTF mould in its main Dark of the Moon toyline (apart from the Amazon.com exclusive) but Takara Tomy did, tweaking the mould to look like the Optimus as seen in the third film - mainly giving him abs. This version came with a huge jetpack as seen in the film. This is the Buster Optimus Prime mould which has been used (though it has the face mask) and features the Buster Cannon. The fuel tanks need to be removed when attaching the jetpack. This is also the first mould to remove the flip out swords and remould the arms slightly. Toys R Us did run a campaign in 2011 which gave away a new hand held Battle Blade set with purchases of over 3,000 Yen on Transformers products. The figure has the identical electronic speech from RA-23 Buster Prime and says "I am Optimus Prime." In vehicle mode the jetpack and weaponry can be stored on the back of the truck.

A redeco and minor remould of DA-15 Jetwing Optimus which features new weapons. This version no longer has the Buster Cannon and its fuel tanks are therefore not removable. The larger weapon can split in half forming 2 smaller weapons and it also comes with a shield. The biggest difference with this figure is the vehicle mode. The shield converts to a new grill for the front of the truck and the weapons attach to the fuel tanks. The shield and weapons can also be stored on the back of the vehicle mode. The electronic speech on this version now says "We must stop the Decepticons."

Another Asian Market exclusive as the 2010 release was. These are just repackaged figures and are identical to the Revenge of the Fallen boxed version.

The black redeco of Jetwing Optimus Prime is an Asian market exclusive. A black version was initially going to be a lucky draw item in Japan's Circle K stores but somewhere down the line it was cancelled. Its unclear whether there would have been any differences between the two. This features a lot of chrome, even the jet wings are chrome. This figure is without the face plate and its voice chip says "I am Optimus Prime."

Hasbros version of DA-15 Jetwing Optimus Prime was an Amazon.com exclusive and is just a straight repaint also featuring the same "I am Optimus Prime" voice clip. The large guns have been coloured and the jet wings have been painted to resemble G1 Optimus Primes truck which is a nice touch. Selling for $104.99 it was cheap considering the Takara Tomys alternative. 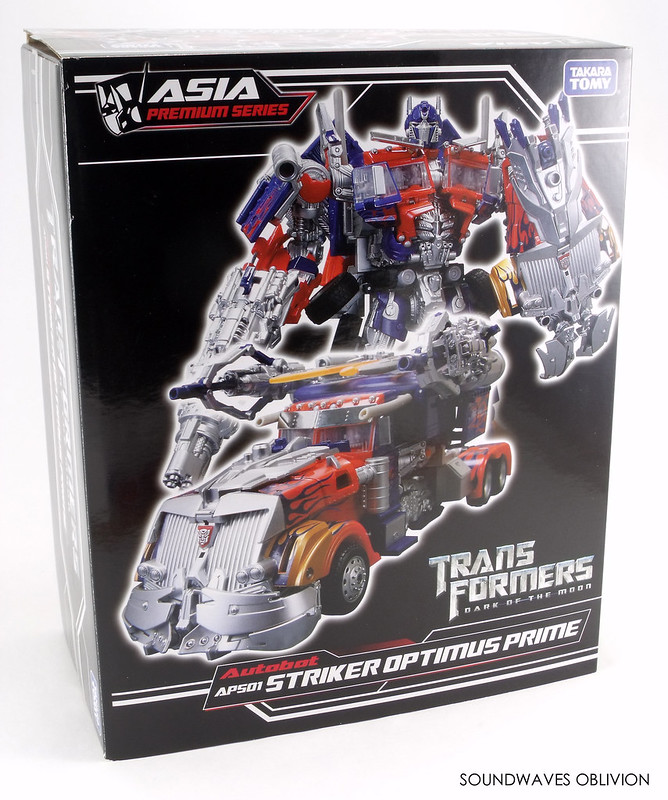 This is an Asian Market exclusive and the first in the Asian Premium Series which so far have been premium repaints of the leader class figures from the movie line. This is a repaint of DA-28 Striker Optimus Prime in a deco rivalling Buster Optimus Prime. This also comes with the 2 sword accessories which were previously released as Toys R Us exclusives in Japan. Like DA-28, this version of Optimus Prime speaks "We must stop the Decepticons." 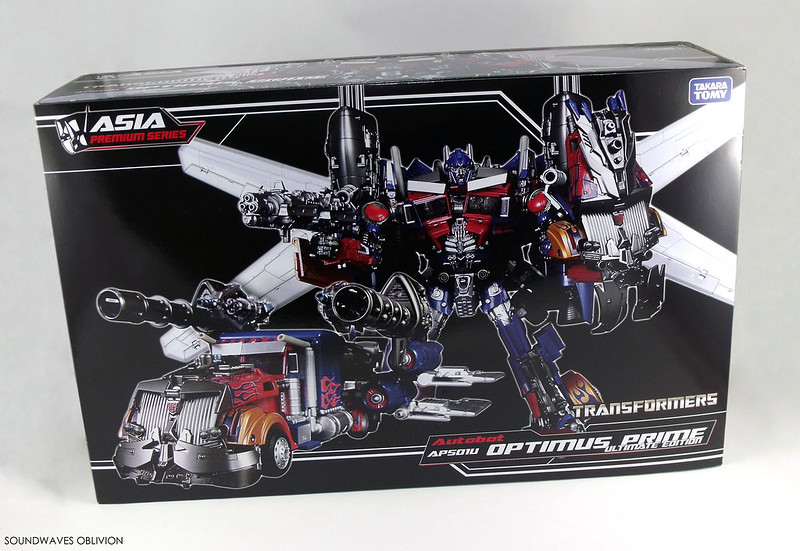 Just when you thought the APS-01 Striker Optimus Prime could be the best release so far, Takara Tomy release Optimus Prime Ultimate Edition as an Asian market exclusive with a hefty price tag. This release is the Jetwing Optimus Prime mould combined with Striker Optimus Prime. The colours aren't as vibrant as the first APS-01 and are quite dark in comparison. There is no chrome this time round only silver paint detailing nor does it have any pin striping around the flame decals however it does feature a few intricate paint detailing. This comes with every single accessory this mould was ever released with as well as adding a few new accessories such as the "knuckle duster," hand held battle hooks and articulated hands. This version does not have a face plate and it speaks "We must stop the Decepticons." 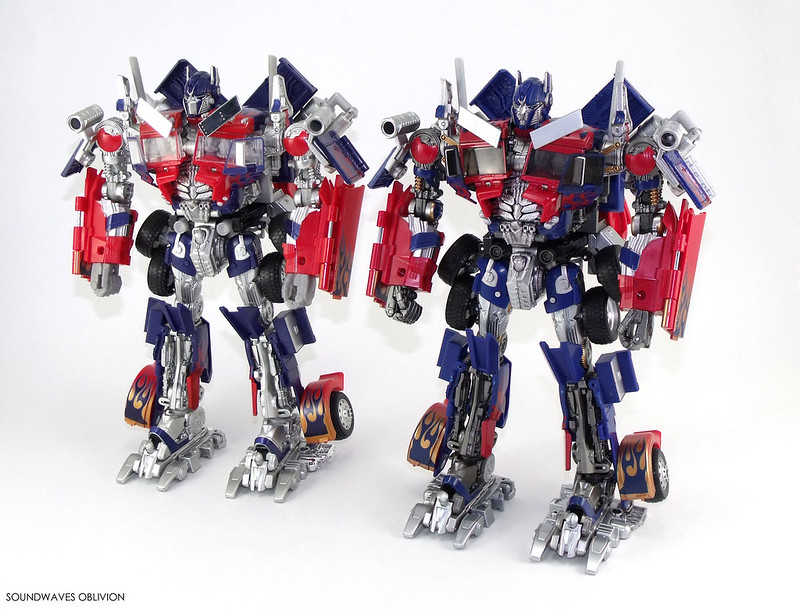