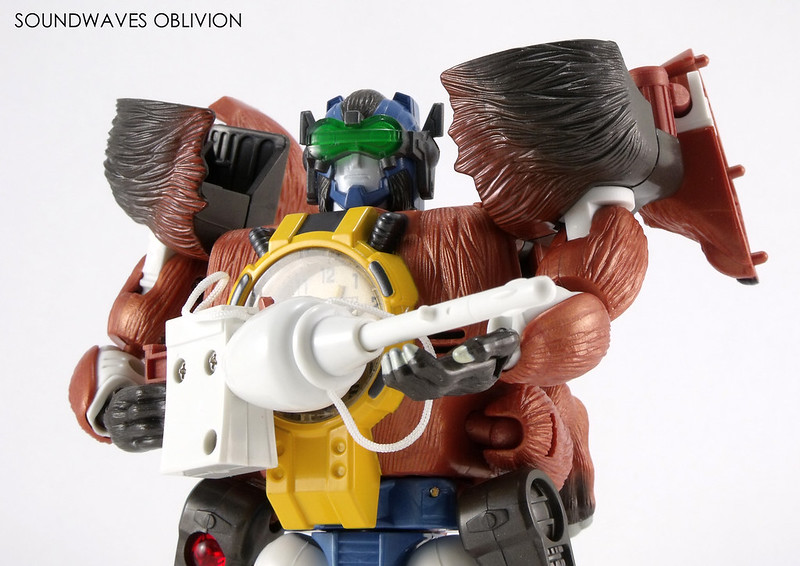 Profile (Translated from the Trading Card)
S-3 Dimensional Explorer / Heinrad
Function: Dimensional Explorer
Heinrad usually acts dazed and vague. He has a clock in his stomach, which gives him the ability to manipulate time. His super-secret skill is being able to stop or stretch time for a limited duration, there's a flaw in this ability: he can't control it at will. Heinrad's past and combat ability are surrounded in mystery.
PWR: ?; INT: ?; SPD: ?; END: ?; RNK: 7; CRG: ?; FPR: ?; TCH: ? 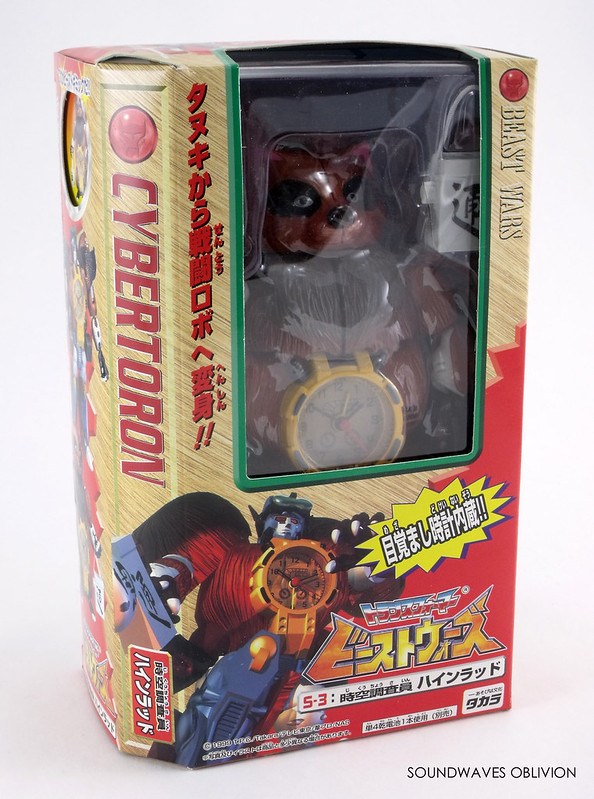 Beast Wars Neo was a Japanese exclusive toyline released in 1999 and unlike Beast Wars Second which preceded it which only had 3 new mould produced, it had a slew of new moulds produced as well as the odd repaint. 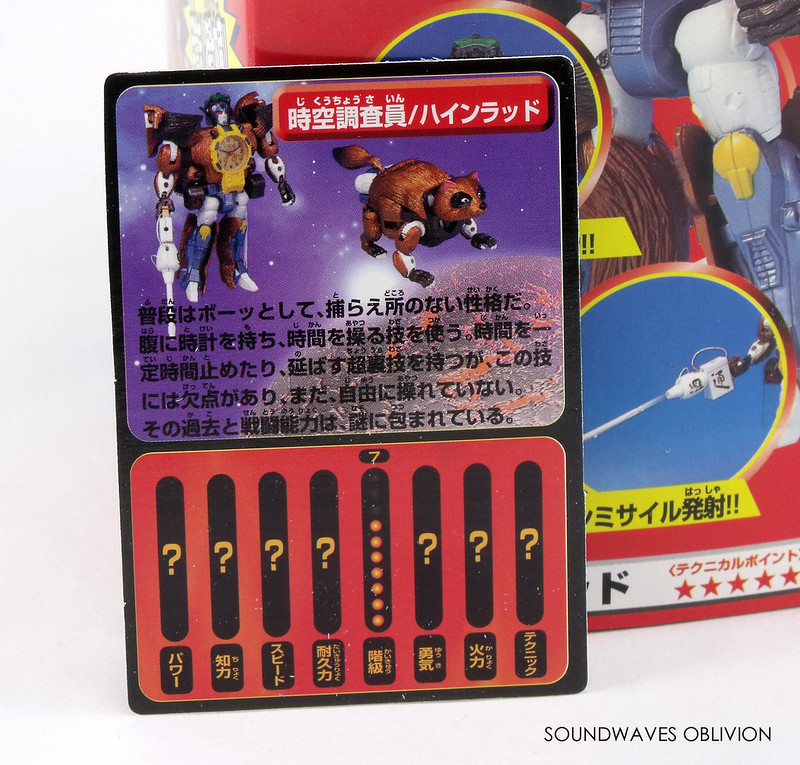 Heinrad was one of the new moulds produced and is based on a Tanuki, a species of raccoon (or quite possibly a seperate species altogether based on disputes between researchers) found in Japan. Like most of the other  Beast Wars Neo toys, Heinrad has a third mode, an alarm clock based on a Shigaraki ware Tanuki statue.


Alarm Clock Mode (Translated from the box description)
When his alarm starts, it won’t stop until he turns into robot mode. He won’t let you sleep in of a morning! 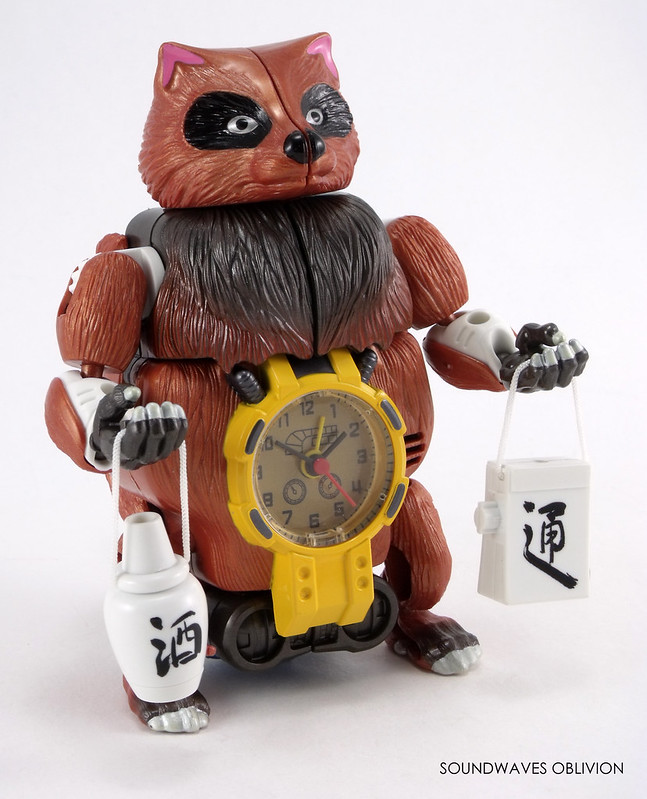 Heinrad comes boxed in his alarm clock mode. The actual alarm is quite useless in this mode as you can't set the time, alarm or stop the alarm. When the alarm sounds you would have to transform Heinrad into robot mode and press the robot head down to stop the alarm. In this mode Heinrad holds 2 containers on string, one labelled with 酒 meaning sake (alcohol) which represents virtue (in the instructions it is labelled as a "Tokkuri" which is a pot for warming sake. The second container is labelled with 通 (in the instructions it is called a "passbook") which is a counter word for letters; this is a container for promissory notes representing trust. 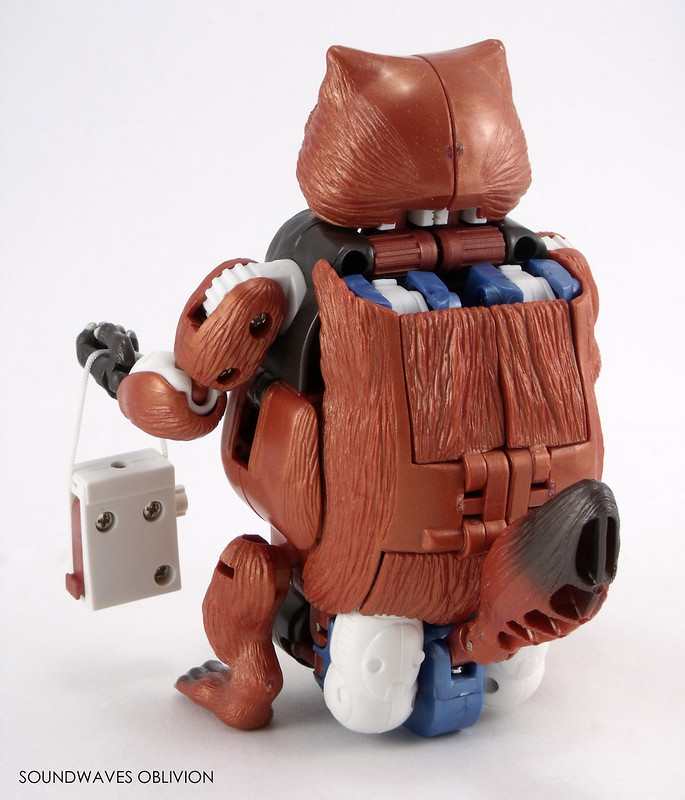 Transforming into beast mode is quite simple, after removing the Passbook and Tokkuri, the beast limbs are straightened and the beast head pulled upwards and then is posed on all fours. In this mode the robot hips are exposed at the rear of the beast mode by the tail. 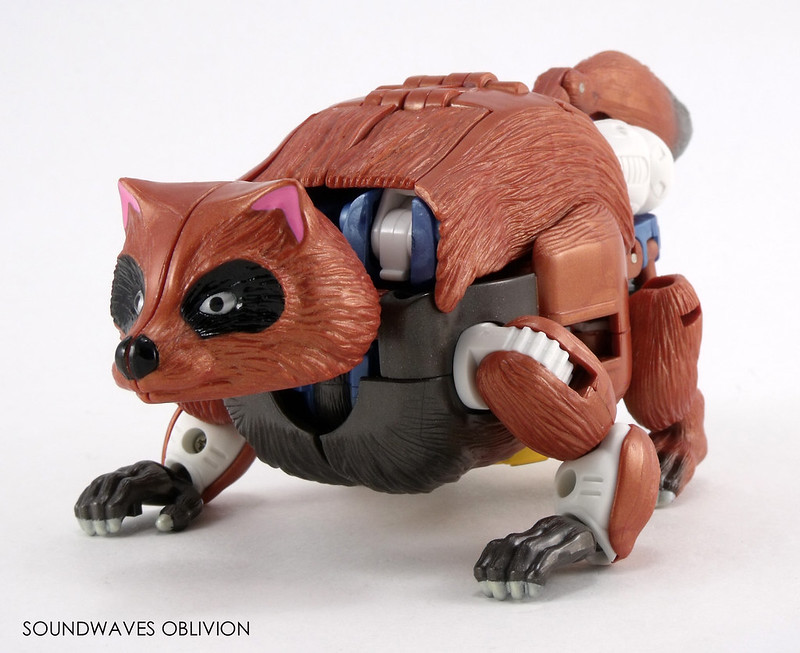 Transforming to robot mode is simple enough however the brown plastic does feel brittle and there is one clip in the waist which feels rather fragile. Nothing has broken in mine yet but there are stress marks and I think I have only transformed this 3 times since I bought it 19 years ago. 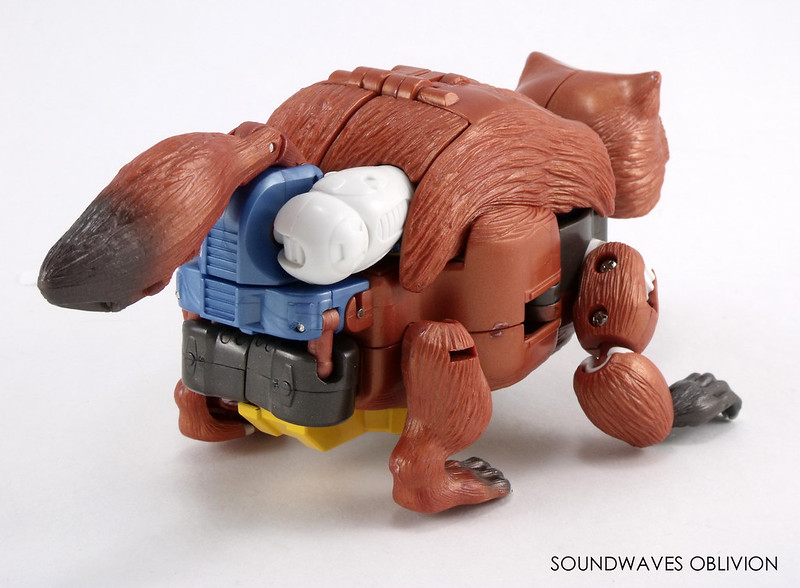 Heinrad stands quite tall in robot mode and like the alarm clock mode he has the alarm clock on his chest. On Heinrad's back is the access for the alarm clock battery (a single AAA) and the controls to set the time. Heinrad's head can be pulled upwards after the alarm has been set (the yellow hand on the clock) and the head needs to be pushed down to stop the alarm from sounding. Heinrad also sports a pair of green goggles which can be raised or lowered; when transforming back to beast mode the goggles need to be lowered over Heinrad's eyes. 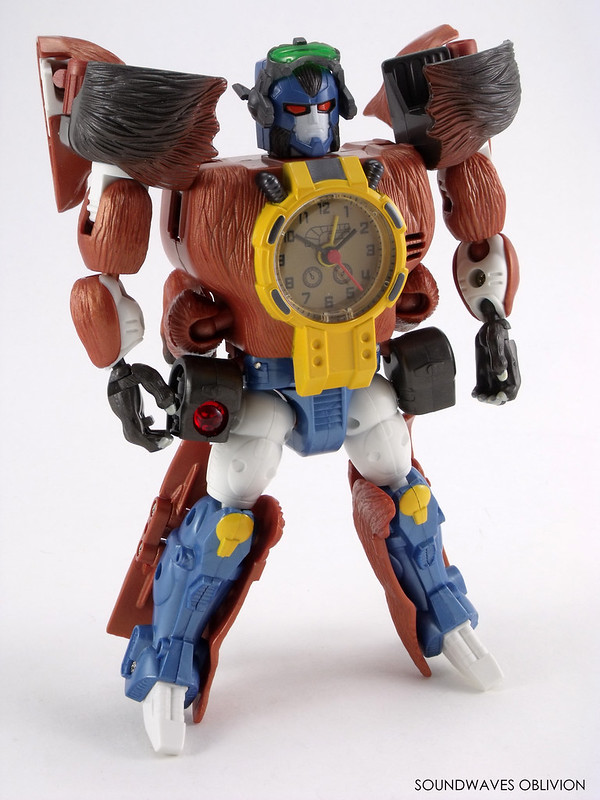 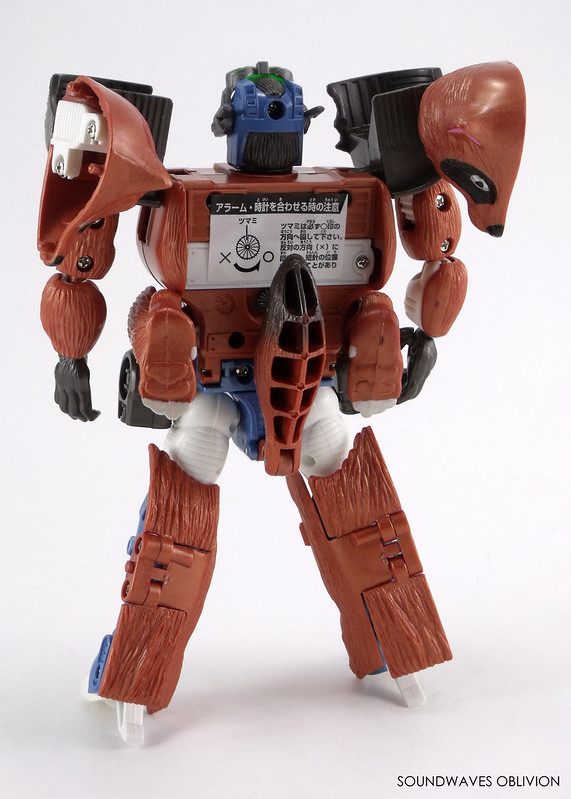 Heinrad's weapon is combined from the Tokkuri and Passbook and has a fold out handle. Heinrad comes with 2 missiles for the weapon which when not in use are stored on Heinrad's legs. 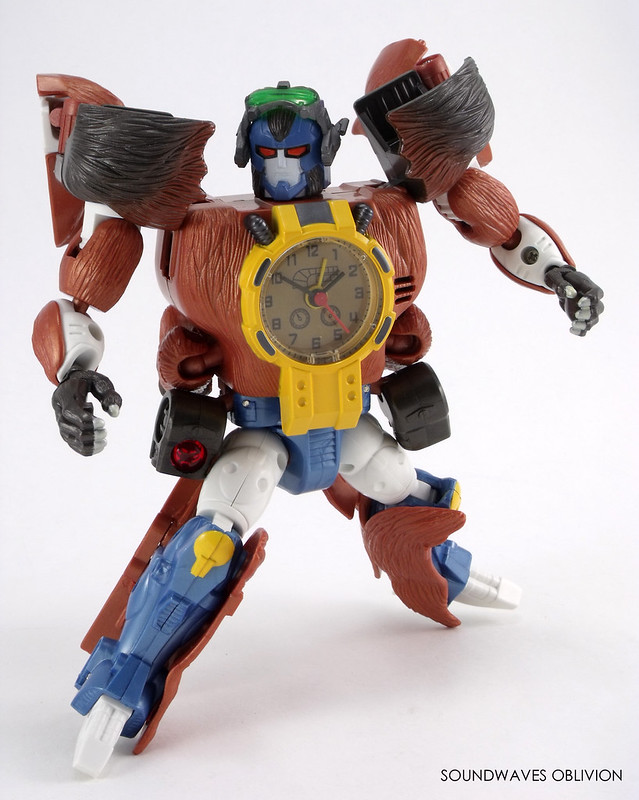 Overall Heinrad is a decent enough figure, by modern standards it does feel dated with limited articulation and the fact the plastic feels rather cheap / brittle. 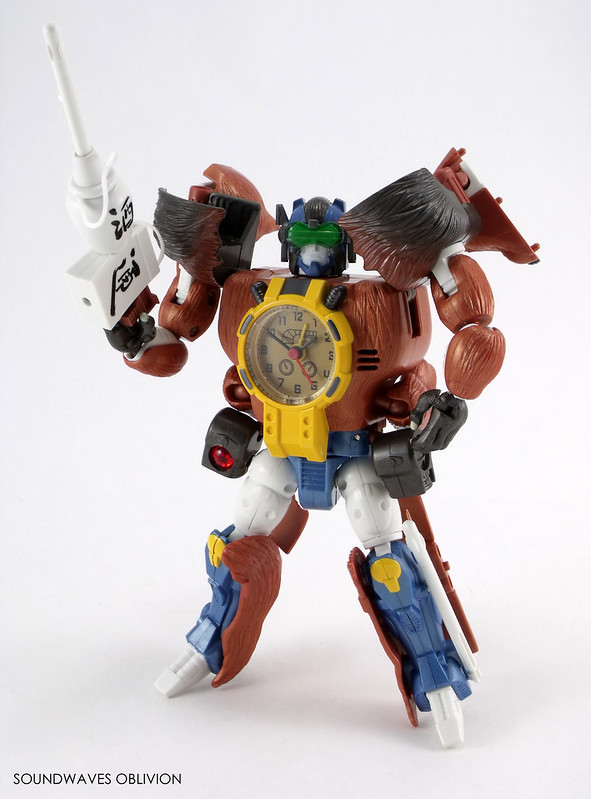