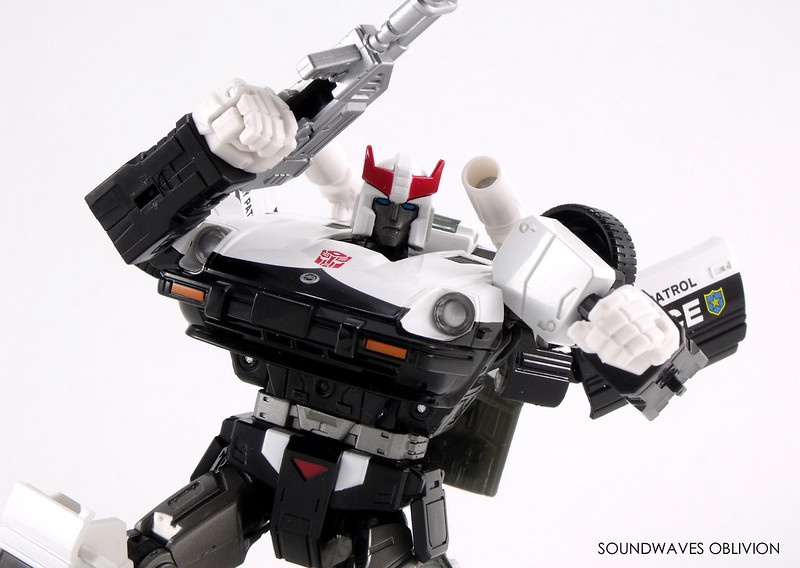 Profile (Translated from the Trading Card)
MP-17 Cybertron Strategist / Prowl
Function: Strategist
Motto: “Logic is the ultimate weapon.”
Profile:
Prowl is a Cybertron warrior who is quiet, patient and capable. Transforms into a Fairlady 280Z-T patrol car. Stands out amongst the other Cybertrons due to his sophisticated logic centre. He can instantaneously analyse any situation and devise the best strategy. However, in incomprehensible situations his systems are prone to shut down
STR:7; INT:9; SPD:7; END:9; RNK:9; CRG:9; FBL:4; SKL:9


The Masterpiece Fairlady Z cars followed on from the Lamborghini Countach cars in 2012 the following year in 2013. In February 2013, Takara Tomy designer Shogo Hasui teased a silhouetted prototype of what was later to be confirmed as Prowl.


In April 2013, small images of the prototypes of Prowl and Streak were released, the robot mode is the very same which appeared in sihlouette in Shogo Hasui's tweet.

MP-17 Prowl was finally released at the end of September 2013, if ordered through Amazon.jp Prowl came with an additional accessory, a single black shoulder cannon based on the original G1 toy. The cannon was black with a non removable silver missile. The cannon itself fits over Prowls existing shoulder cannons, it looks strange only having the one cannon however the following release of MP-18 Streak also came with the same single shoulder cannon. 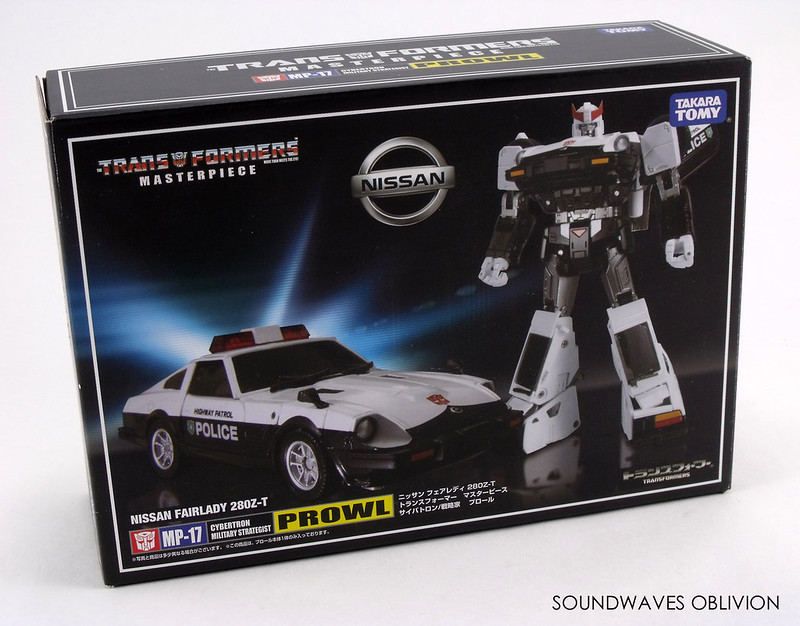 Prowl is based on the animation model yet still features details which future Masterpiece releases would omit in favour of a 100% cartoon accurate figure. Prowl represents that halfway point Takara Tomy reached before deciding on which way they wanted to to with the Masterpiece line. In 2018 Takara Tomy would release MP-17+ Prowl as a Takara Tomy Mall exclusive which was a repaint of MP-17 based on the cartoon colours. 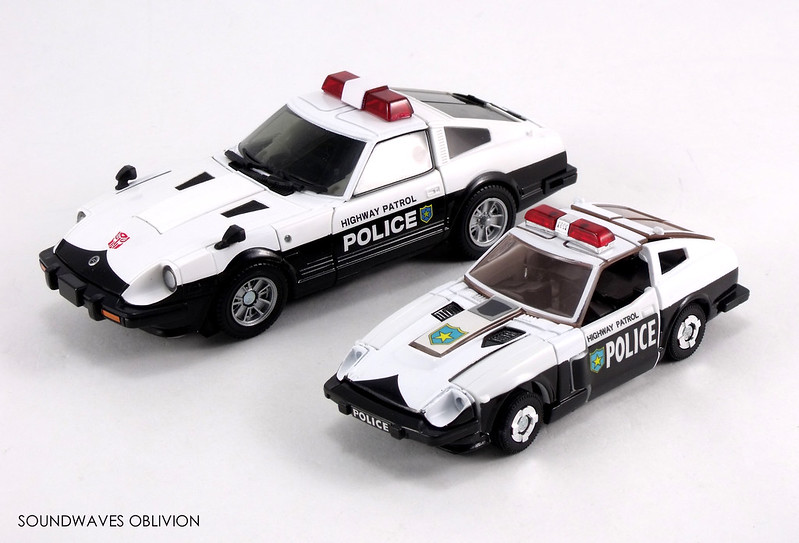 
Prowl features many details in vehicle mode from the car badge on the bonnet, windscreen wipers, car aerial, exhaust, wing mirrors and the car doors feature the same Highway Patrol livery as the original 1984 Prowl. There are two holes on the side of the rear bumper where the shoulder missile launcher can plug into and there is a hole on the warning lights on the car roof where Prowls handgun can also plug into. 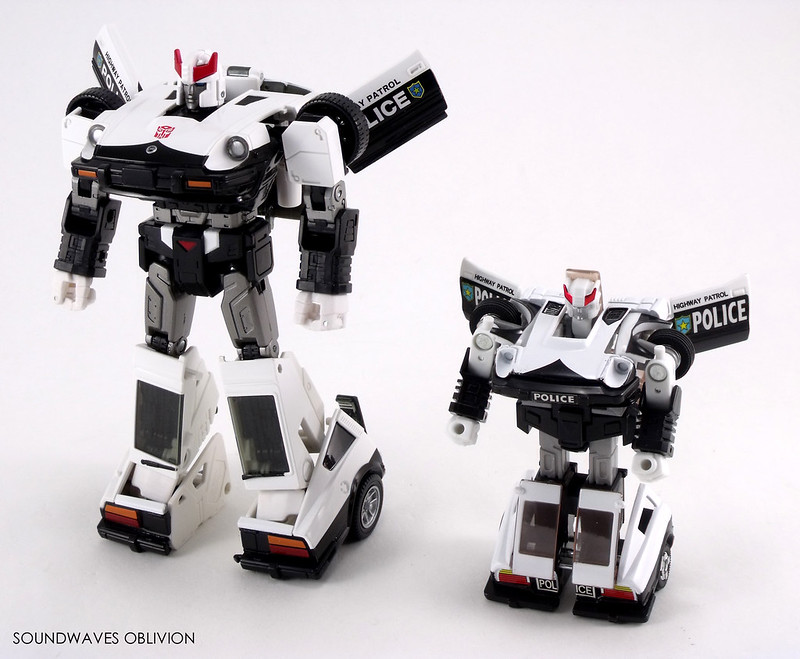 The transformation is not complicated and everything fits into place, as it should with this being the first use of the mould. With later releases, the weapon would struggle to stay slotted in place in the robots fist. One clever bit of detailing is when transforming the rear of the vehicle to form the legs, by extending the legs a detailed black plastic section is pushed towards the clear window which forms the lower leg.


Prowl is very articulated however when compared to the likes of MP-39 Sunstreaker, the design of Prowl shows its age. Prowl is very close to its cartoon model but colour wise it follows the original G1 toys lead; this was updated in 2018 with the release of MP-17+Prowl. Another detail which shows the designers looking toward the G1 toy are the shoulder cannons. In the original animation Prowl did not have them, however an animation error did show Prowl with the shoulder cannons but this was really Bluestreak.

Black & White Trailblazer (Translated from the back of the box)
The “Fairlady Z Highway Patrol Car” is a sports car manufactured by the Nissan Motor company from 1978, it is a special vehicle based on the Fairlady 280Z-T. The Fairlady 280Z-T has a long nose and short deck which is reminiscent of the American styled cars of that era; the headlights are set in the car body which makes this sports car particularly eye catching. The attractive car body is adorned with black and white paint with an emergency light on the roof and “Police” is printed on the sides of the car body; this is a cool police car which transforms into the Cybertron Strategist “Prowl”.
Prowl is the first ever transforming police car. The robot design utilises the impressive front bumper as the chest, the rear portion of the car becomes the legs. Overall the excellent Fairlady Z is fully integrated into the robots design. The police car’s distinctive two tone paintwork furthermore adds to the attractive robot mode design. Prowl has become the cornerstone for all police car robots having gained tremendous popularity, so much so his design has had an influence on the design of robot anime and toys that followed. Prowl the pioneer for all police car Transformers has finally made an appearance in the Masterpiece series with his Fairlady Z design. This product faithfully reproduces the stylish long nose, short deck design of the Fairlady 280Z-T under supervision from Nissan Motor. By expressing the black and white police car paintwork further enhances the cars realism. The robot mode has been reproduced with the anime styled proportions that he looks like he has just stepped out of the screen; the clear shin of the robot mode showing the inner workings further enhances the overall texture. It is so perfect that it’s almost like you are going to experience Prowl serving an arrest warrant.

Nissan Fairlady 280Z-T (Actual Car Notes) (Translated from the back of the box)
The Fairlady Z was built with a view to capture the North American market, a sports car of which Japan is proud. The Fairlady Z 280Z received an overhaul and debuted in 1978 as the second generation of Fairlady Z. Its overall style has inherited the traditional image of the long nose and short deck with a sharp edged look. The front face of the grill enhances the integration with the car body and its aerodynamic characteristics made this a leading sports car in Japan at the time. The engine is a 2800cc L-type inline 6 cylinder overhead camshaft engine. Delivering 145 horsepower it is almost like driving a car with a much larger engine. Its rear suspension uses a semi-trailing arm which improves performance and comfort. This became the first domestic car to adopt the “T-bar roof”. A Japanese sports coupe which has attracted the interest of many car lovers both domestically and overseas. 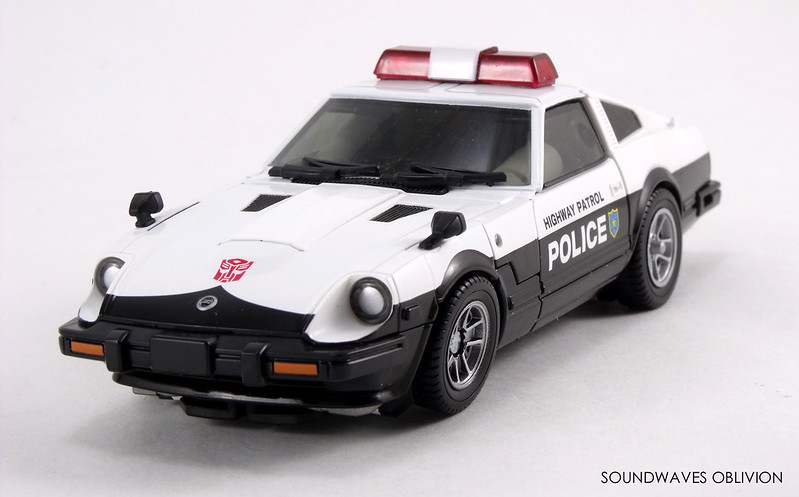 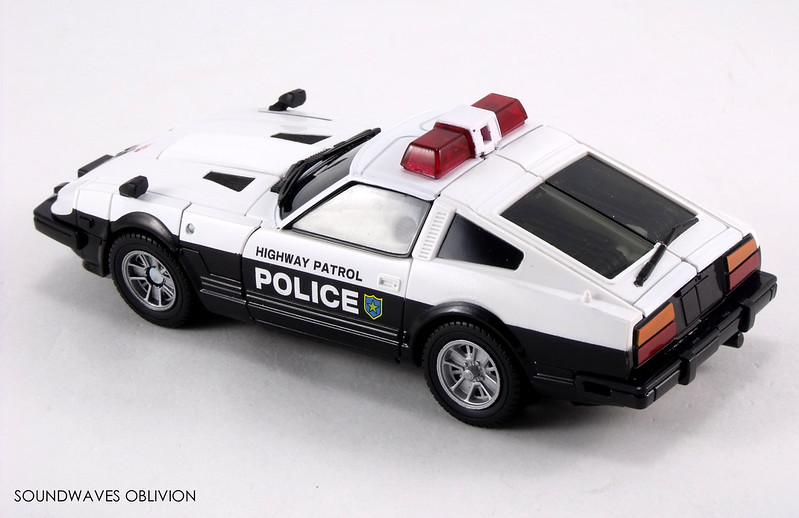 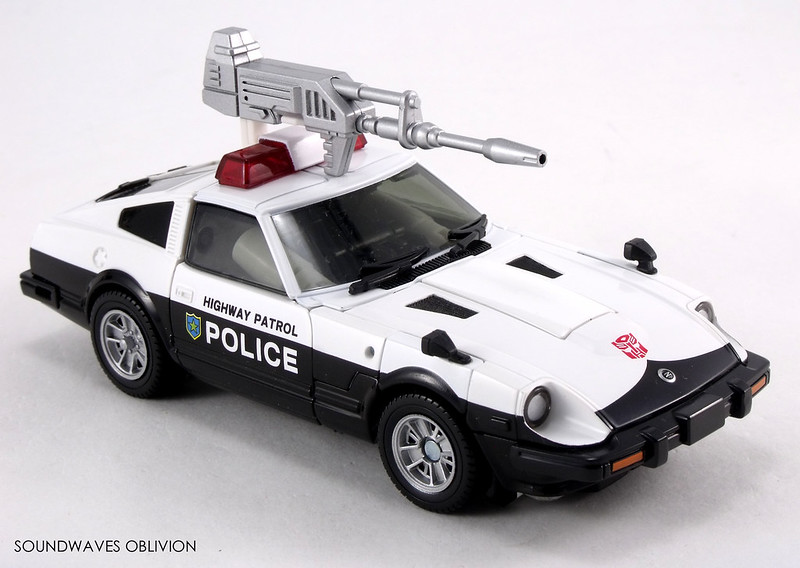 Vehicle Mode: Nissan Fairlady 280Z-T (Translated from the instruction pamphlet)
The vehicle scanned by Prowl is a Fairlady 280Z-T police car tuned up for high speed pursuits on the highway. Its outward appearance is a two-tone black & white colour reminiscent of a Japanese police car complete with an emergency warning light on the roof. The side of the body is inscribed with “POLICE” with a shield emblem containing a star, this has become synonymous with the character of Prowl.
Due to the appearance of his vehicle mode he can travel at speed through urban areas, sounding the siren to express his urgency. Prowl is therefore best placed to carry out such missions as urban security, escorting important goods and leading vehicles in emergency situations. Prowl can also intercept police and fire radio communications in real time allowing him to draft his strategies. It could be said that Prowl’s vehicle mode is ideal for the Cybertrons to adapt to the human way of life.
The name Prowl means “wandering” which is derived from “Prowl Car”, otherwise known as a police car. His name mirrors his vehicle mode. 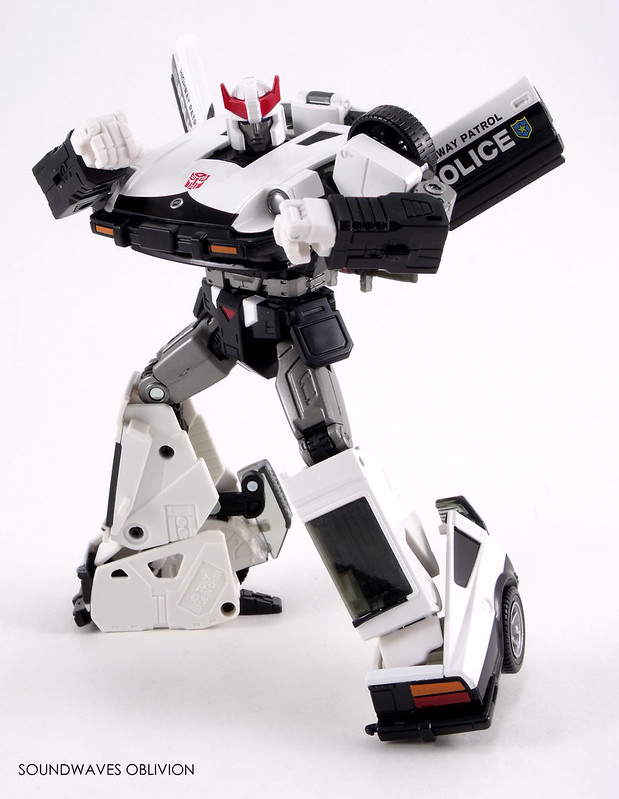 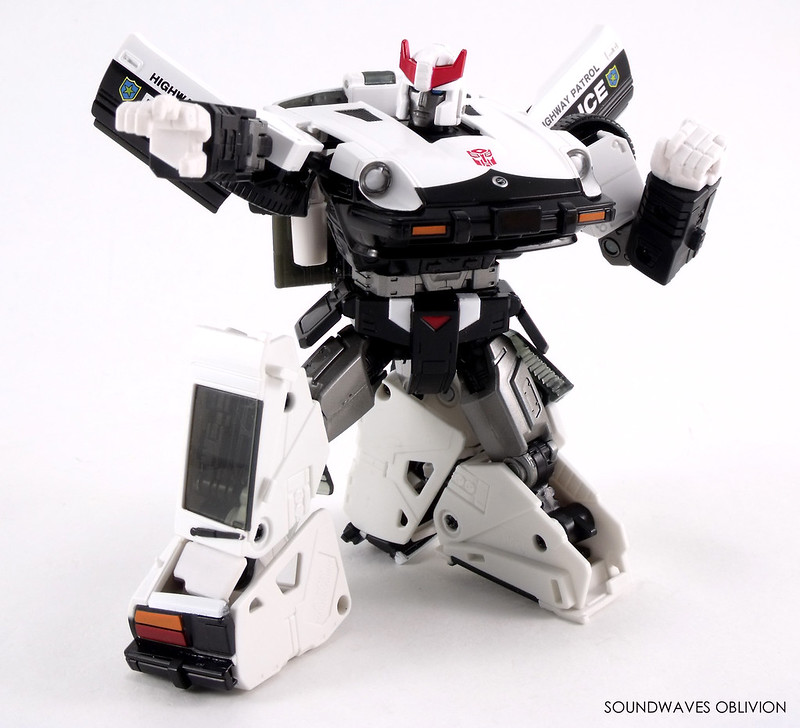 Robot Mode: Prowl (Translated from the instruction pamphlet)
Function: Strategist
Motto: “Logic is the ultimate weapon.”
Profile:
Prowl is the Cybertron’s strategist and is quiet, sincere and highly intelligent. Has a sophisticated built-in battle computer which can analyse the combat situation in real time allowing him to instantly advise on the best course of action on the battlefield. Prowl can observe up to 800 targets and it takes him 0.5 seconds to compute their trajectories and determine countermeasures.
Prowls greatest strength is his patience; he will never give up until he has accomplished his duty. Prowl will not compromise his strategy with theory, he only regards solid facts as he strives to find the truth and purpose for everything. It is only down to Prowl’s strategies that the Cybertrons are not overwhelmed by the Destrons superior fighting power.
Convoy considers Prowls role essential to the Cybetrons military force and has given him a high-ranking position as his second in command. However, as Prowl is planning strategies on a daily basis he was unable to assume any kind of command so these duties were relegated to Meister. 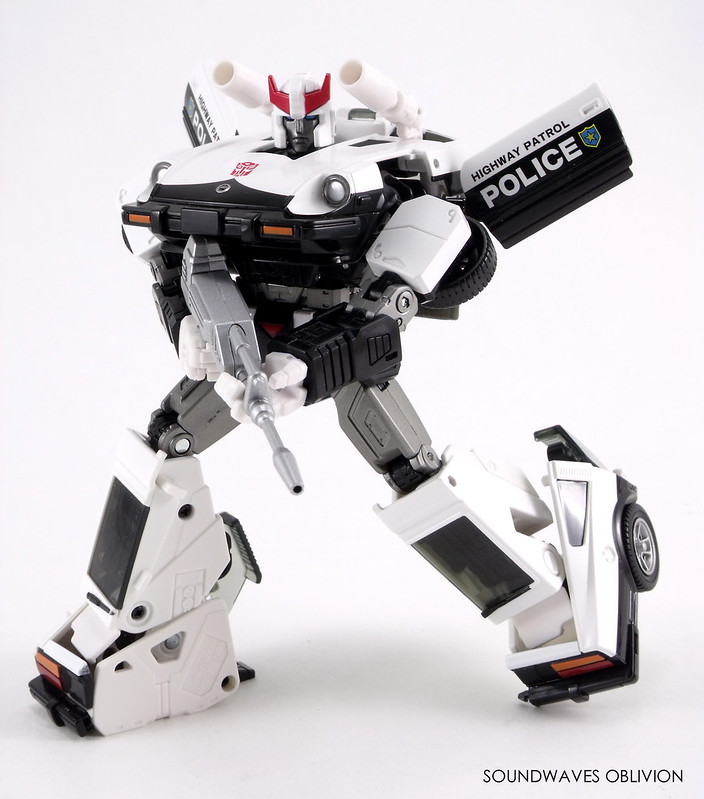 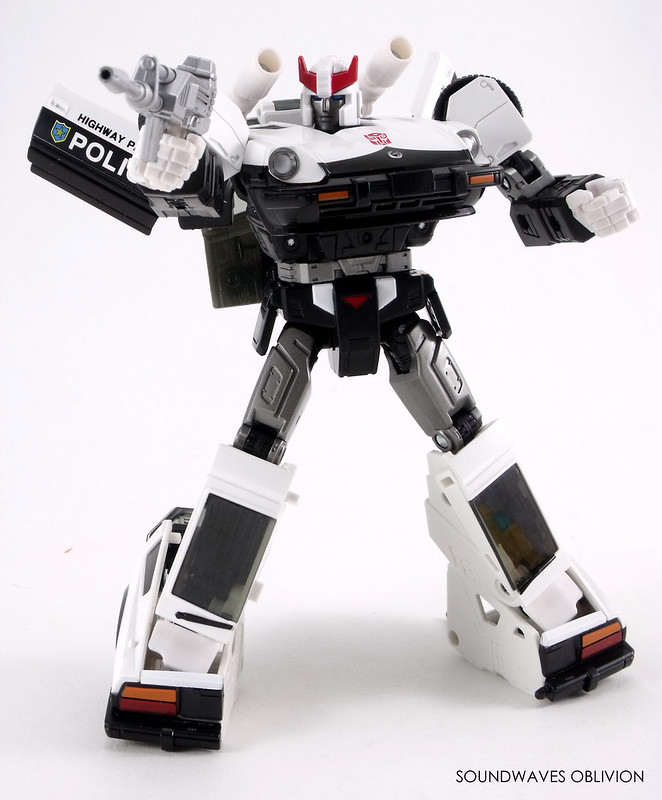 Weapon: Semi-Automatic Rifle (Translated from the instruction pamphlet)
Prowl carries a high performance semi-automatic rifle capable of firing various types of missile rounds as well as laser beams. This equipment is unique to Prowl and gives him greater flexibility on the battlefield, his on board battle computer analyses the situation and he selects the appropriate setting on his rifle. His acid pellets are just one of the missile rounds in his arsenal, these contain a very strong acid which can instantly corrode metal. Enemies who have a strong outer armour have a weak interior so these pellets are aimed at the weaker joints causing the enemy’s interior to collapse. The effects are demonstrated in the unaired domestic episode “The Computer Rebellion” when Prowl repels the drones controlled by Torq 3. 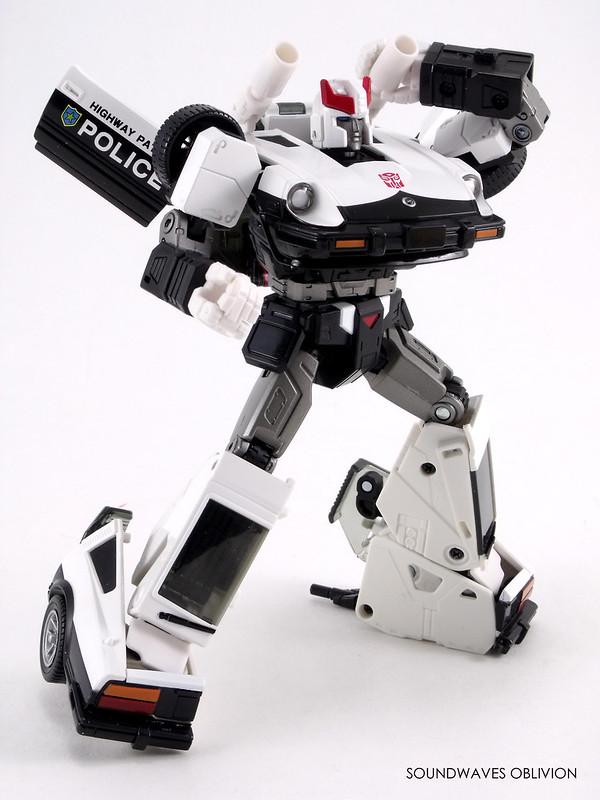 Weapon: Shoulder Cannon (Translated from the instruction pamphlet)
Cannons equipped on Prowls shoulders. They fire wire-guided missiles which cause an explosion upon impact reaching 12,000°C. The shoulder cannons were not equipped or used in the cartoon, they were however an impressive looking weapon from the original toy.