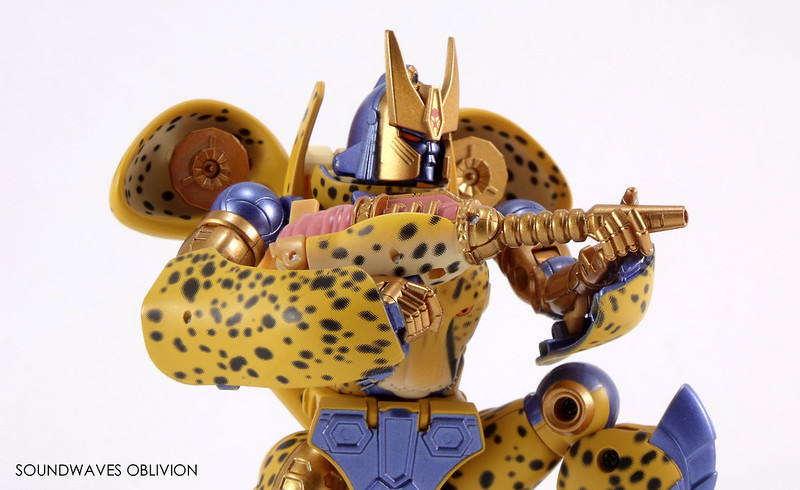 Profile (Translated from the Trading Card)
MP-34 Cybertron Jungle Patrol / Cheetus (Beast Wars)
Function: Jungle Patrol
Height: 2.3m (In Robot Mode)
Weight: 1.5t (In Robot Mode)
Profile:
Cheetus is a young Cybertron warrior who as his name suggests, turns into a Cheetah. In beast mode, he boasts speeds of up to 300 km/h which he uses to hi advantage when undertaking patrols and reconnaissance missions. Occasionally causes trouble when running into action before thinking. Can be disobedient but he is still growing and learning lessons as a Cybertron.
STR:6; INT:5; SPD:10; END:8; RNK:6; CRG:9; FBL:7; SKL:7 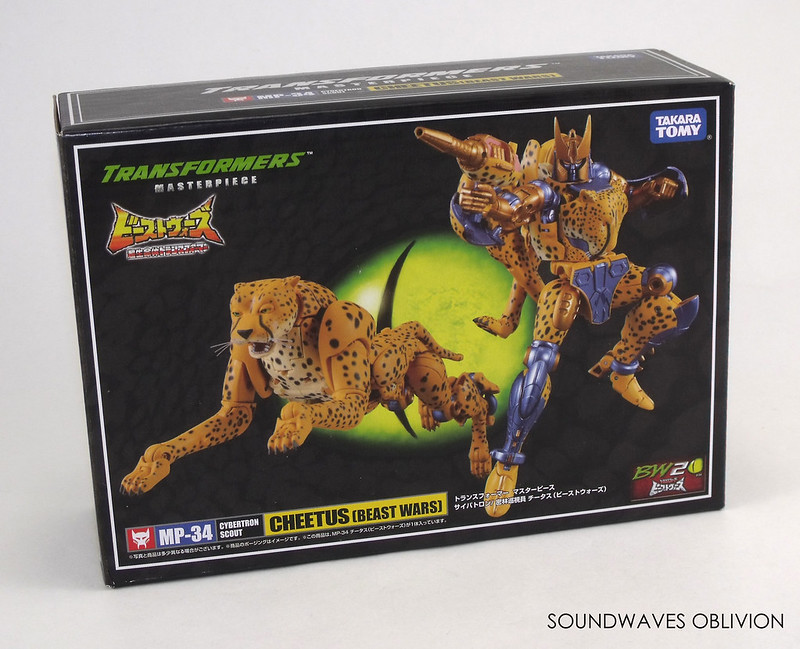 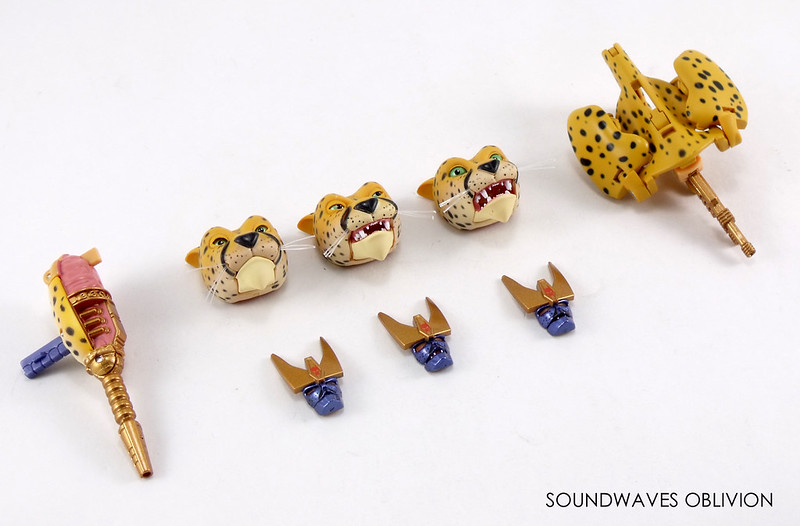 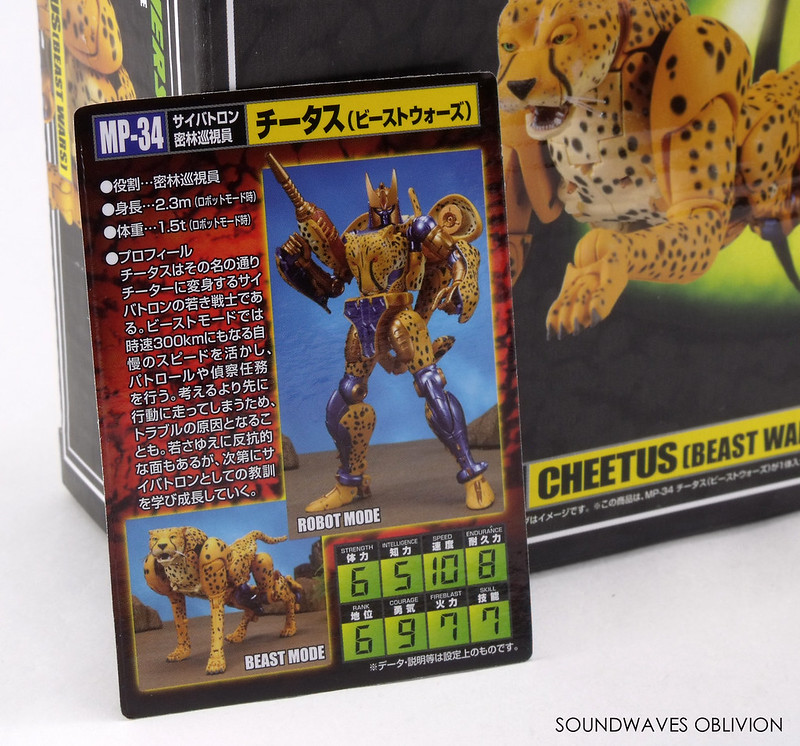 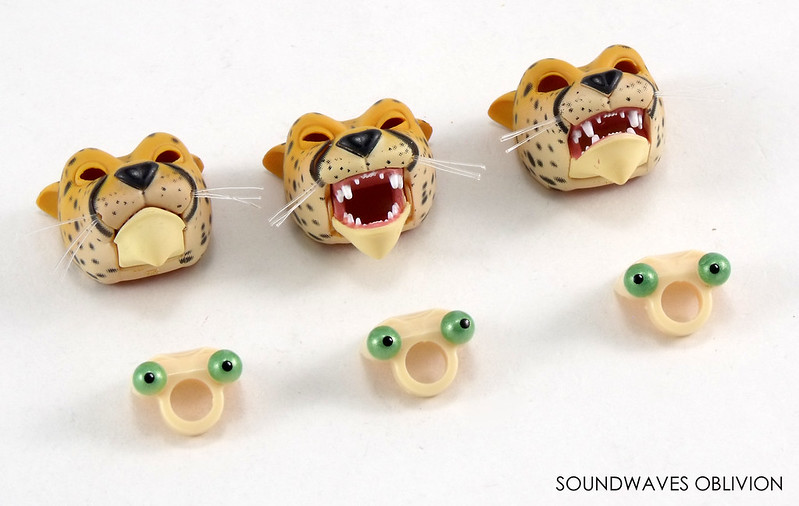 Water transfer printing has been used on Cheetus much like MP-32 Convoy, unfortunately due to a few tight joints rubbing such as the beast mode feet this has a tendency to flake off. The overall beast mode silhouette has a striking resemblance to the original CGI version but as the CGI cheats for the transformation there are understandable a lot of areas on the beast mode which show gaps and the back of the beast mode's hind legs have the robot feet dangling off them. Overall though this is the best representation beast mode of Cheetus. 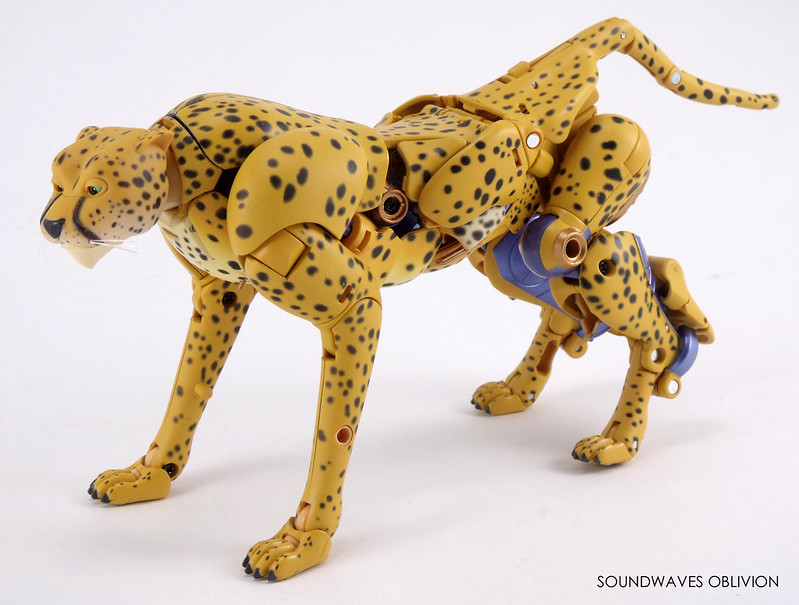 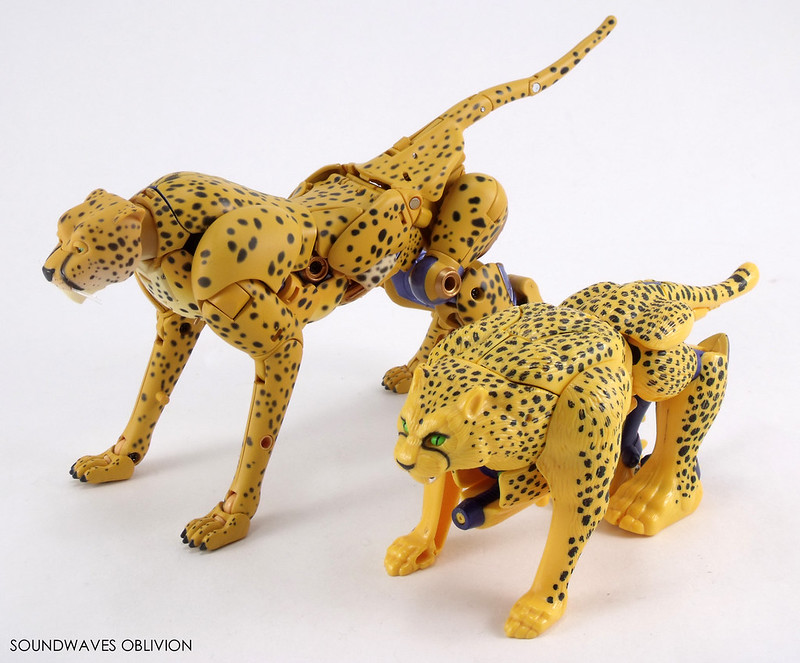 Beast mode is very posable and you can attach it to a stand to allow for more dynamic poses without trying to make it stand upright. The tail also has two joints The port on the underside of the beast mode is on the section that pulls out to become Cheetus Laser Shot A weapon (gut gun) and this is liable to pop out. 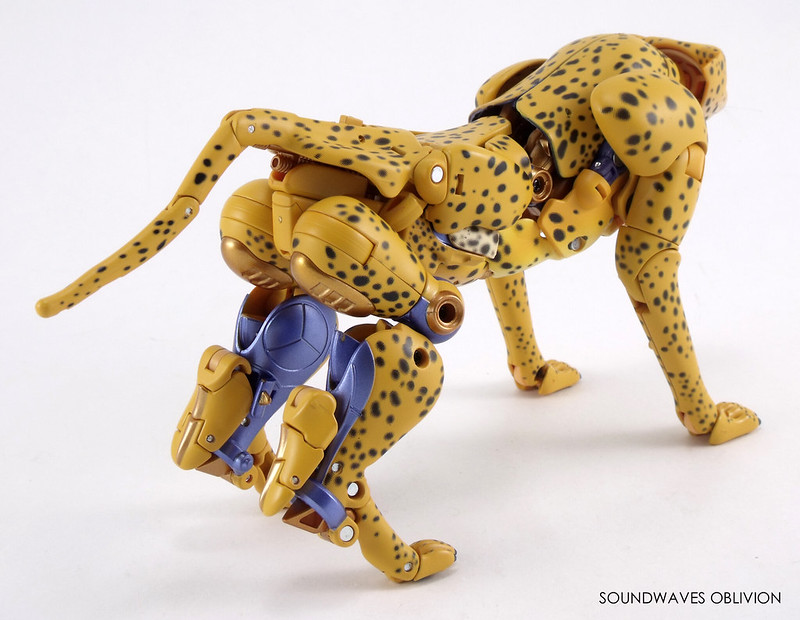 As well as being posable, the beast mode allows a variety of expressions. The beast mode head can pull forward to allow better motion for the head, when you pull it too far it pulls off completely allowing you to swap the heads with the angry head or the surprised head. The beast mode mouth opens and closes and you can also remove and swap about the eyes. 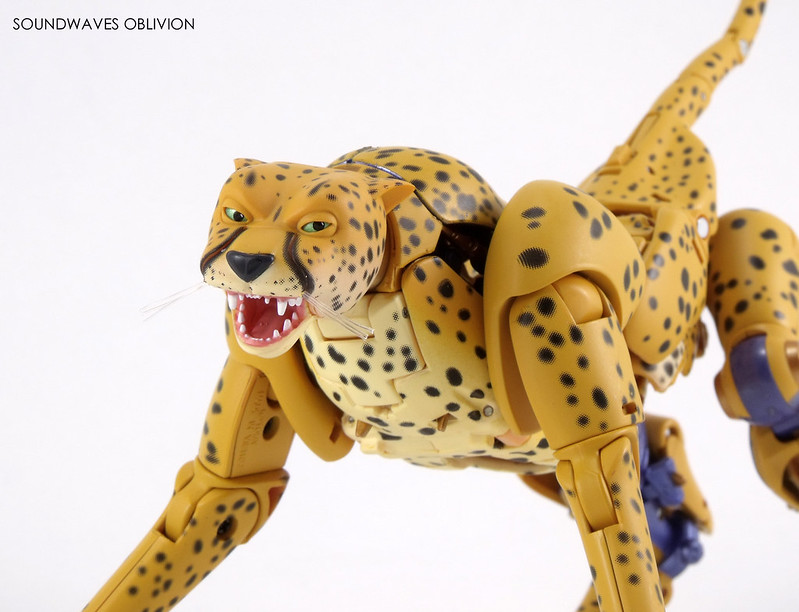 There are 3 sets of eyes in total, one set looking straight forward, one set looking left and the last looking right. If you also own MP-34S Shadow Panther you can use the red eyes from this set for Cheetus to replicate the 1996 version of Cheetor released in the smooth bubble packaging. The beast mode head also features plastic whiskers which are a nice touch however the whiskers can/will get trapped in robot mode bending them. Removing the beast mode head before you transform Cheetus into robot mode will allow you to retain the whiskers in their original state. 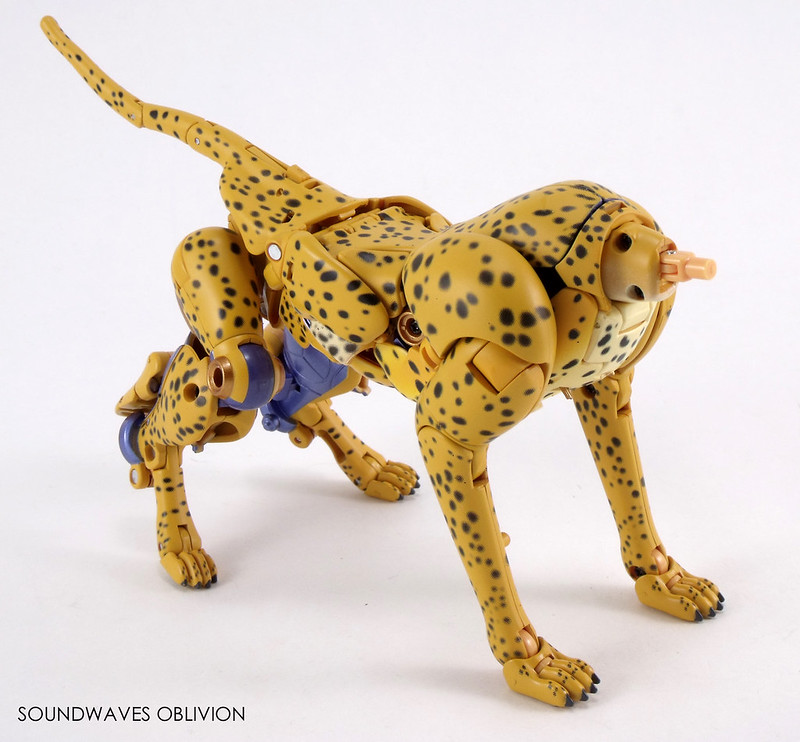 Transformation to robot mode is quite easy for a Masterpiece figure however as the figure feels rather fragile and many of the joints are stiff you have to take your time with it, especially the shoulders. To create the upper torso of the robot mode you have to fold it in on itself putting the real beast mode head behind the "fake" beast mode head chest, this is where the whiskers can get caught. 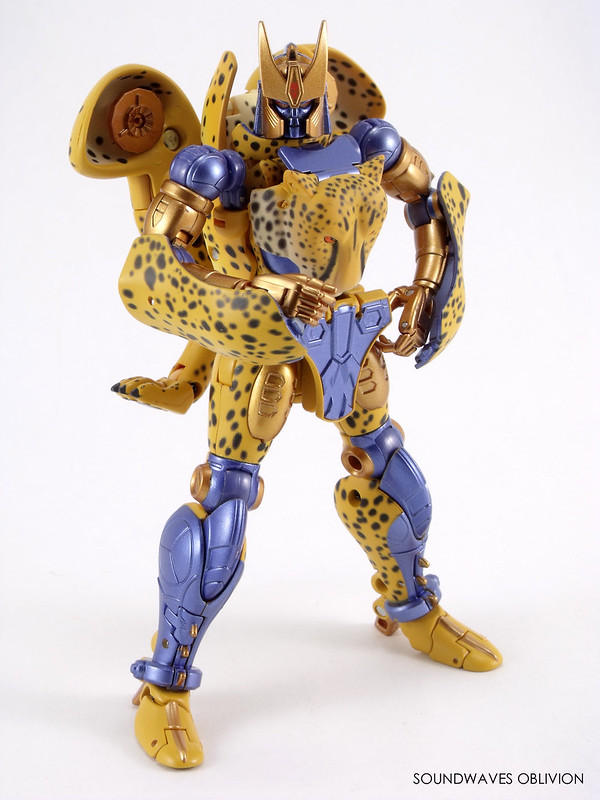 Overall the robot mode is the highlight and looks as close to the CGI as possible. The figure is highly detailed and posable; the head crest features a small Cybertron / Maximal insignia and the head itself features light piping. Using the tall horns you can wriggle these to remove the robot face to swap with the two other faces that come with the set. There is a lot of gold plastic in the robot mode, however this has been painted on. For some reason the hands can be pulled out at the arm, I'm not sure if this was just to accommodate motion or it was for an abandoned feature. Both weapons can also be stored in robot mode on Cheetus' back, it looks a little cumbersome but it is nice to have. 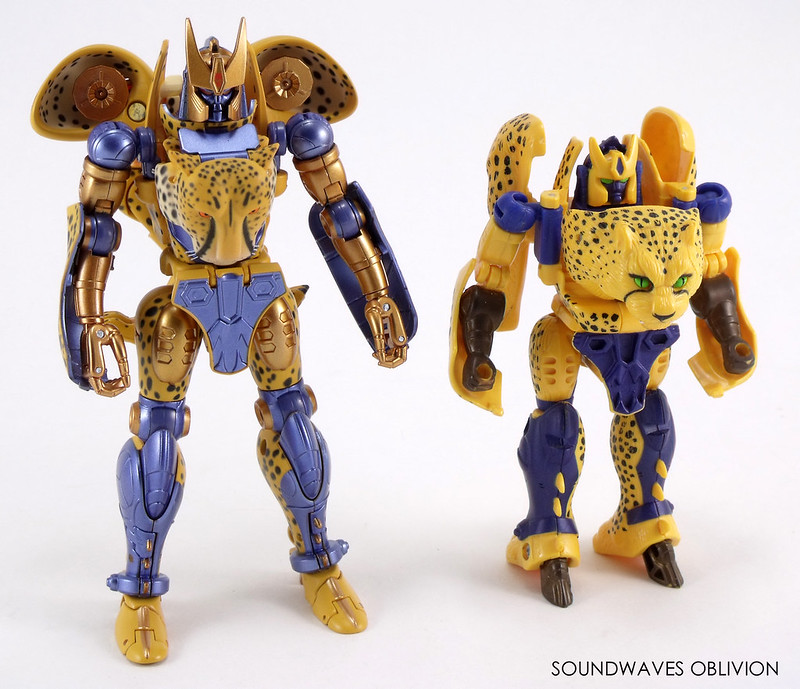 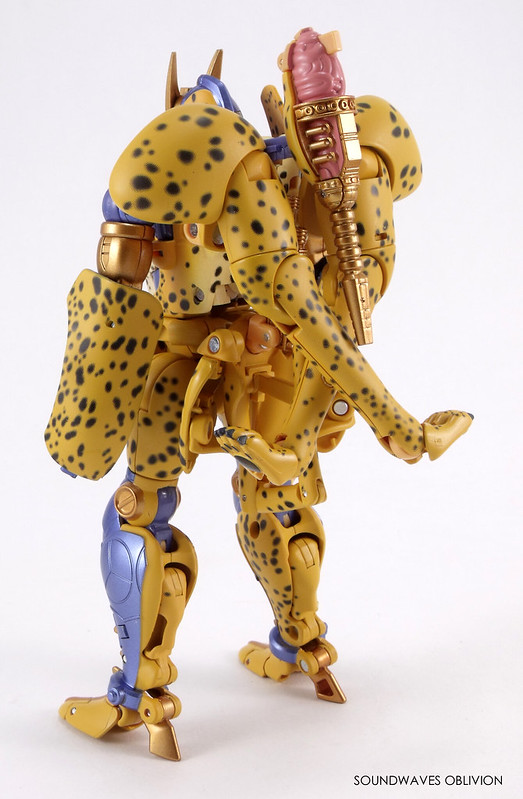 Overall this is possibly the best Cheetus figure that will be released, I do like the original Cheetor figure but the Masterpiece obviously blows it out of the water. The only downside to this figure is it is rather fragile, there are quite a few reports of breakages with the shoulders, the forearm section and the waist clip. As long as you take your time and don't use force the figure will remain intact. 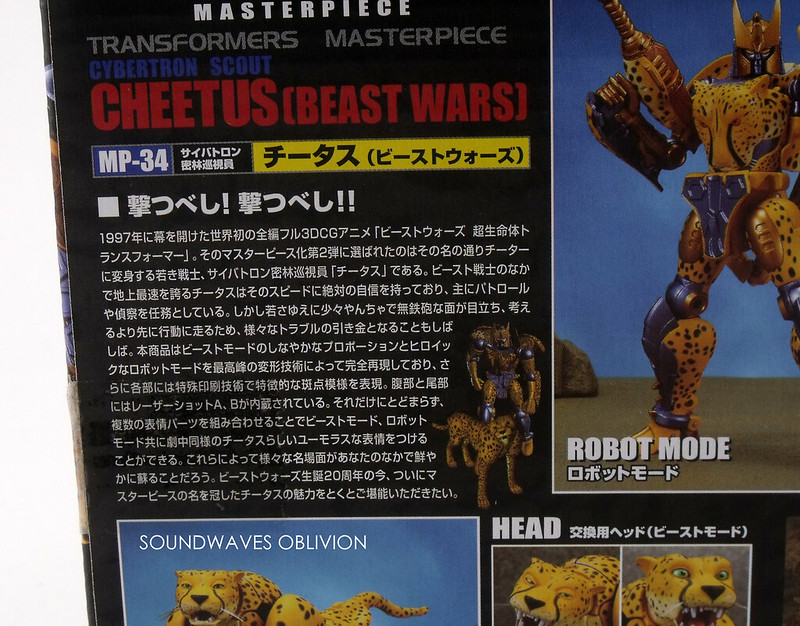 ■ Shoot! Shoot! (Translated from the back of the box)
The world’s first episode of the fully 3D CG animation of “Beast Wars Super Robot Lifeform Transformers” opened in 1997. The young Cybertron Jungle Patrol “Cheetus” who transforms into a cheetah was chosen as the second Masterpiece. Cheetus boasts the fastest land speed of all the Beast warriors; he maintains absolute confidence in his speed and he is responsible for patrol and reconnaissance. However because of his youth his impulsive behaviour stands out; as he rushes to action without thinking he triggers a variety of trouble. This product reproduces the graceful proportion of his beast mode and transformation to heroic robot mode utilises the latest transformation technology. Laser Shots A and B are built into his abdomen and tail. Not only that but by combining multiple facial components in beast mode and robot mode you can create humorous Cheetus-like expressions as seen in the cartoon. Through this you can reproduce a variety of scenes. Now we are celebrating Beast Wars 20th anniversary we would like you to enjoy the charm of Masterpiece Cheetus. 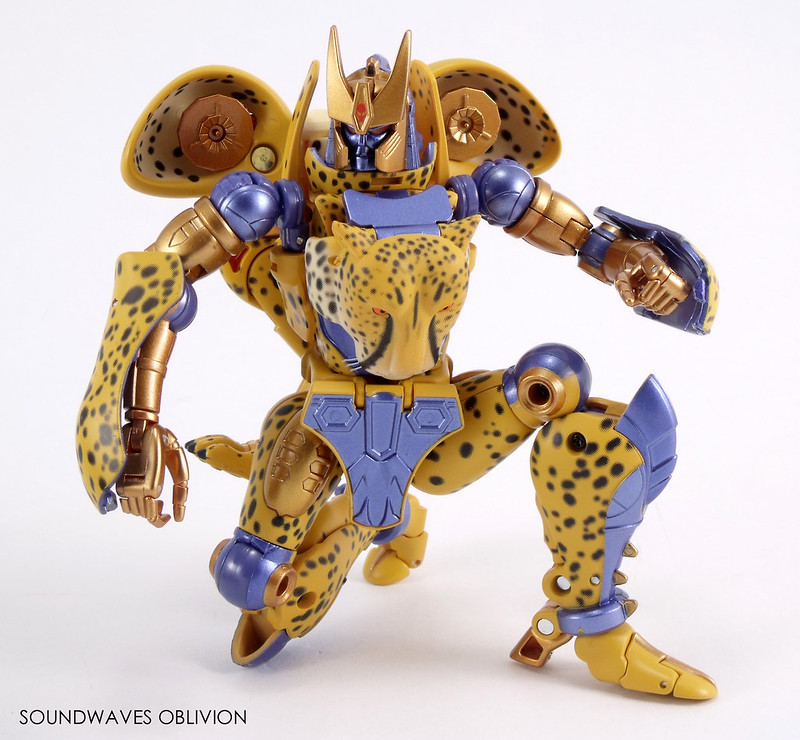 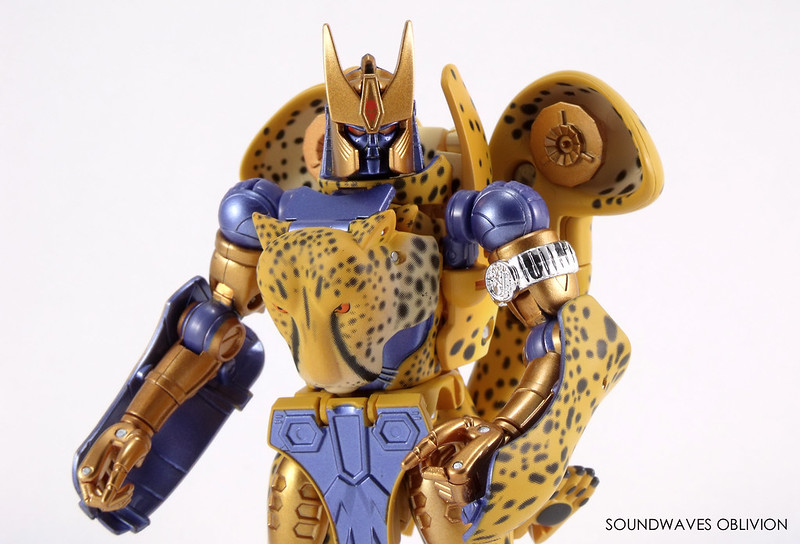 MP-34 Cybertron Jungle Patrol / Cheetus (Beast Wars) (Translated from the instruction pamphlet)
Function: Jungle Patrol
Height: 2.3m (In Robot Mode)
Weight: 1.5t (In Robot Mode)
Profile:
The golden body dashing through the wilderness is like lightning. He is overly curious and once he starts running he can’t stop. The cheetah is the fastest animal on earth, a form which undoubtedly suits him. The young Cybertron Cheetus is filled with confidence and his speed is his greatest merit but at the same time it can also be a disadvantage. In beast mode his maximum speed is 300 km/h; in robot mode his top speed is 250 km/h enabling his to reach enemy territory long before his comrades. His speed also enables him to quickly take evasive action, escaping from the likes of enemy fire. In battle he is not very good at hand to hand combat but by utilising his speed and shooting skills he contributes towards a Cybertron victory. As he wants to be recognised as a fully-fledged member of the team he will be the first to race into action, however he often falls into enemy’s traps compromising his comrades. As he ignores Convoys orders he is frequently reprimanded. Additionally Cheetus is good at defusing bombs and is always willing to test the Cybertrons new weaponry and equipment; one can see that he enjoys danger. Cheetus’ dreams which reflected his emotional state would frequently appear in the show and when the Destrons infiltrate the Cybertron base Cheetus naively worries about the state of his quarters. This shows that Cheetus’ character embodies an adolescent youth. Constantly jokes and teases his comrades but this also shows he is a loyal Cybertron. Passionate and will always rush to a comrade in need even if it would delay the Cybertrons from withdrawing; such as when Tigatron lost his friend, Cheetus was the first to comfort him. In battle he would often work alongside his close friend Rattle. He holds Convoy in high esteem and has said he would not return to Seibertron without him. By throwing himself into the Beast Wars with such a commander, the young Cheetus has matured and embraced his dream of one day becoming a leader in the future. His favourite food is sushi. 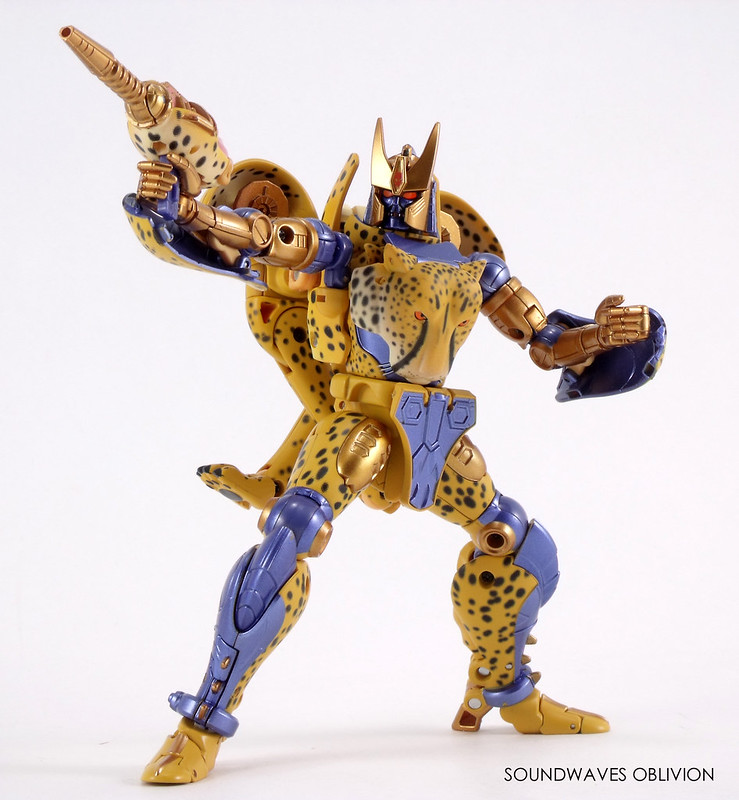 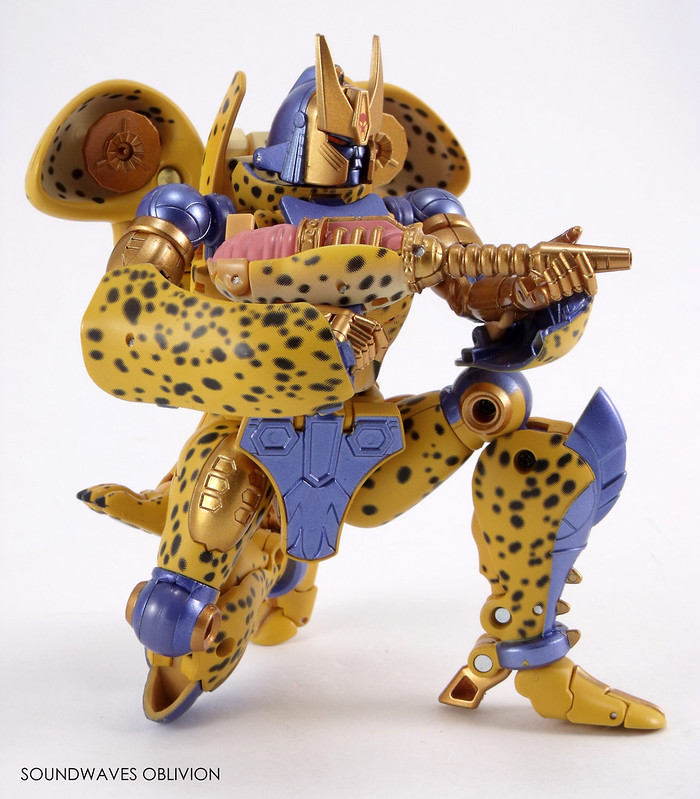 Weapon: Laser Shot A (Translated from the instruction pamphlet)
Characteristic of the Beast Wars, this is a weapon hidden within the body. This is one of Cheetus’ favourite weapons used for many situations. It has a range of 2 kilometres and is fully charged when Cheetus transforms into robot mode. One of the characteristics of this weapon is its rapid fire which matches Cheetus’ character. 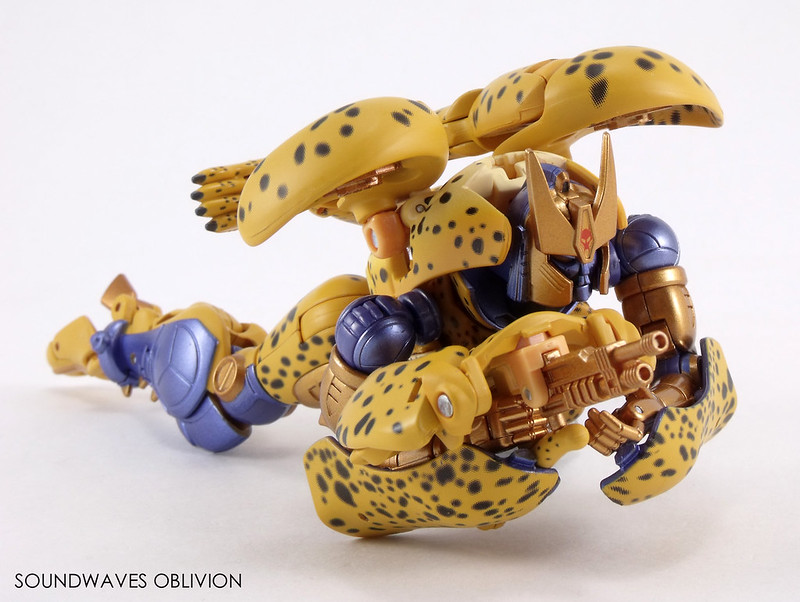 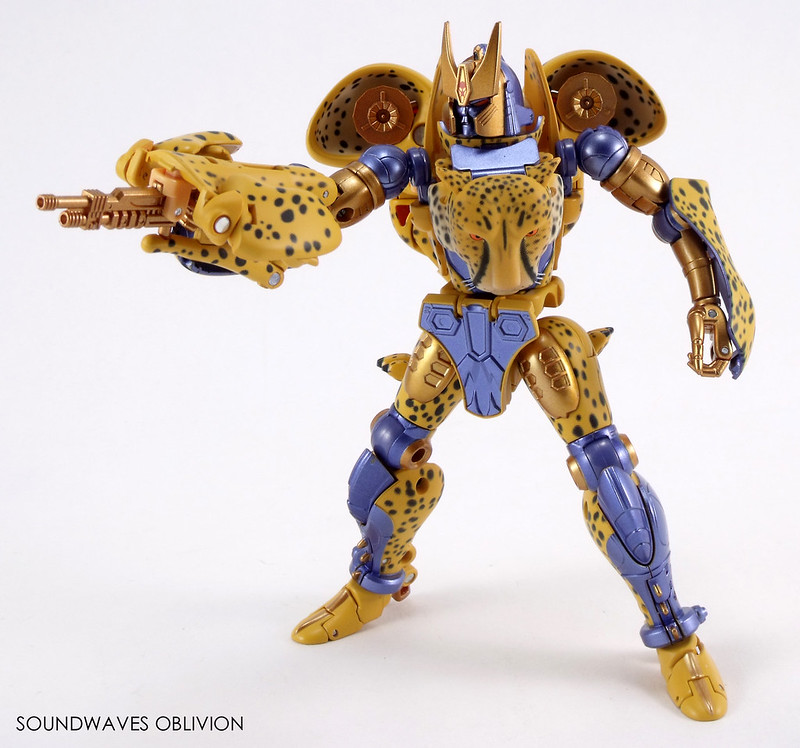 Weapon: Laser Shot B (Translated from the instruction pamphlet)
Another weapon hidden within Cheetus’ body which transforms from his tail. A large rifle shaped weapon mainly used for airborne enemies though he rarely has the opportunity to use the weapon as he instinctively attacks enemies using his legs. He has used the weapon on aerial opponents such as Terorsaurer and Waspeeter as well as on raids of the Destron’s base. 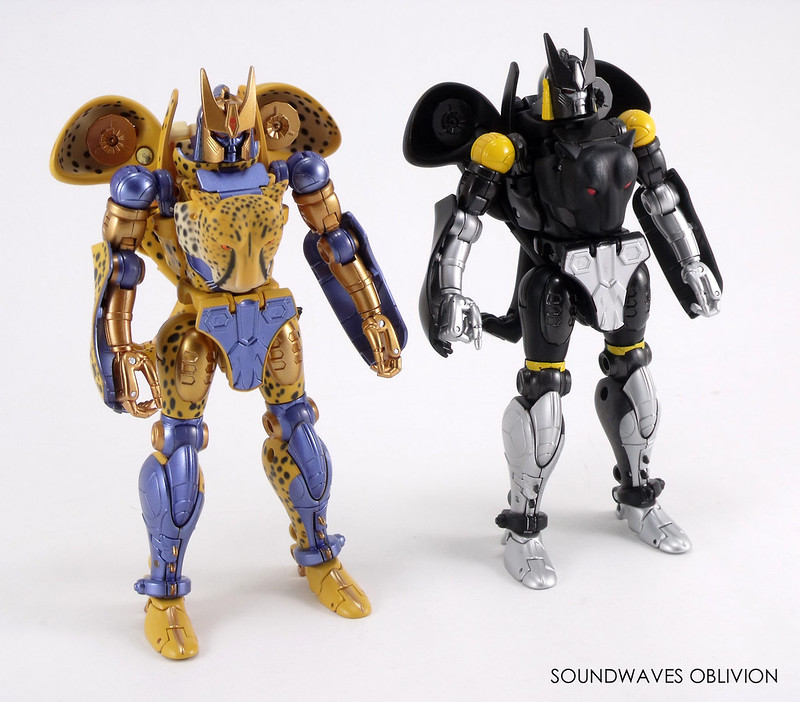 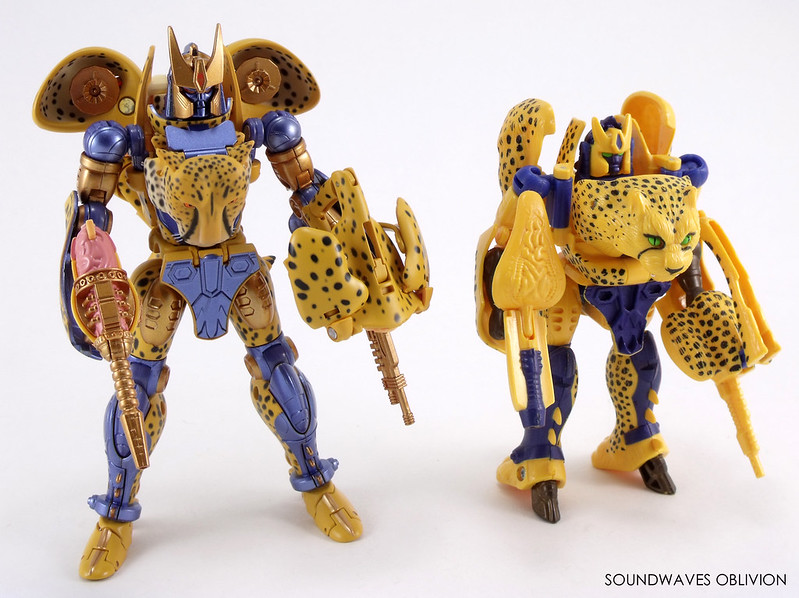