Profile (Translated from the Trading Card)
MP-21G Cybertron Espionage Bumble G-2 Ver.
Function: Espionage
Motto: "The least likely can be the most dangerous."
Profile:
Bumble is the smallest Cybertron warrior but after many battles he has overcome this disadvantage and has grown into a first class warrior. His favourite weapon has been enhanced and he is now equipped with a jet pack for aerial warfare. Flexible to take part in missions either in the air or on land, he is now one of the best Cybertron warriors.
STR...2; INT...8; SPD...4; END...7; RNK...7; CRG...10; FBL...4; SKL...7 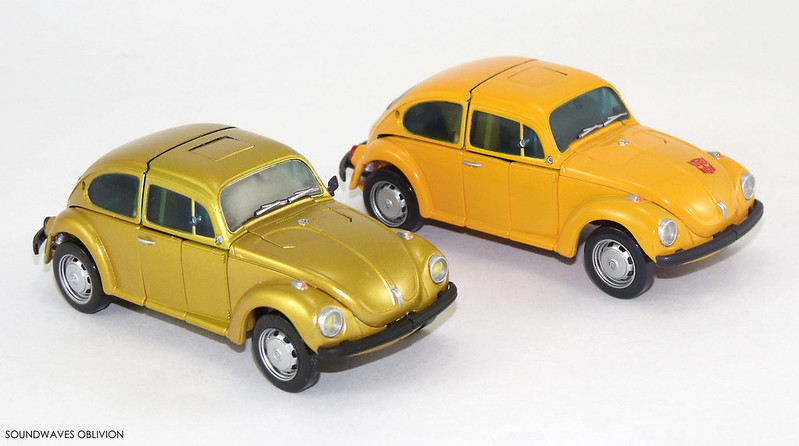 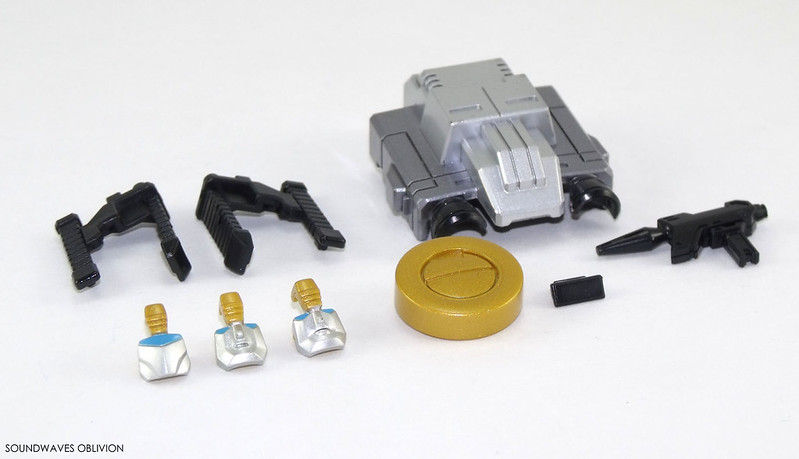 This is the second Masterpiece Bumble released following on from the original MP-21 Bumble released in 2014. This version is slightly cheaper (by 500 Yen / $4) as it comes with slightly different accessories. The original MP-21 came with 2 alternate faces (stern and a smile), a laser gun and Spike in the Exo-Suit. This version comes with 3 faces (the G1 styled mask already fitted), a laser gun and a Jet Pack. 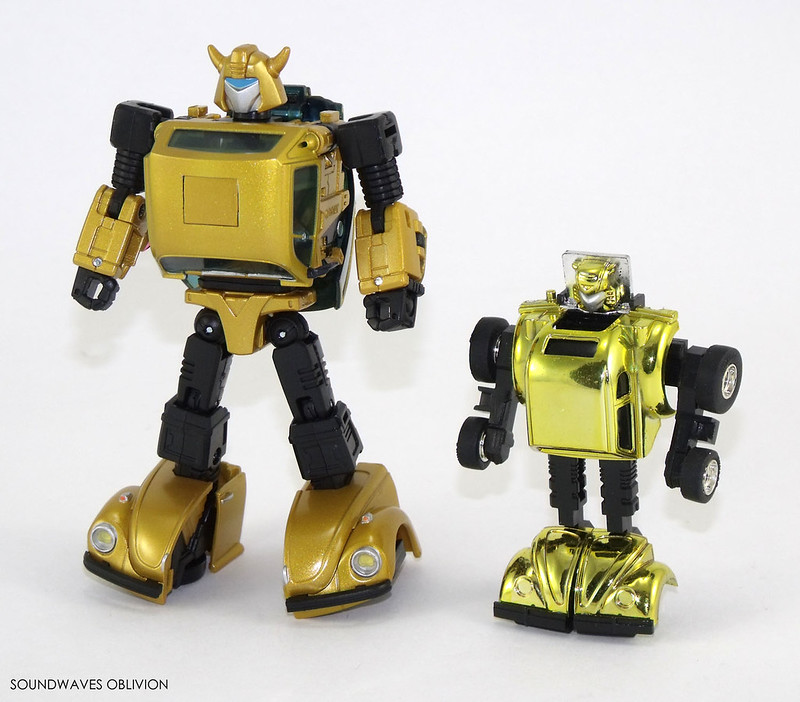 This figure is based on the 1993 Generation 2 version of Bumblebee which is a gold chromed repaint of the 1984 mould. This is the first G2 version available domestically in Japan seeing as the original was only ever released by Hasbro. Rather than a gold chrome finish the plastic is just painted gold which isn't a bad thing as I'd think it would look far too garish otherwise. 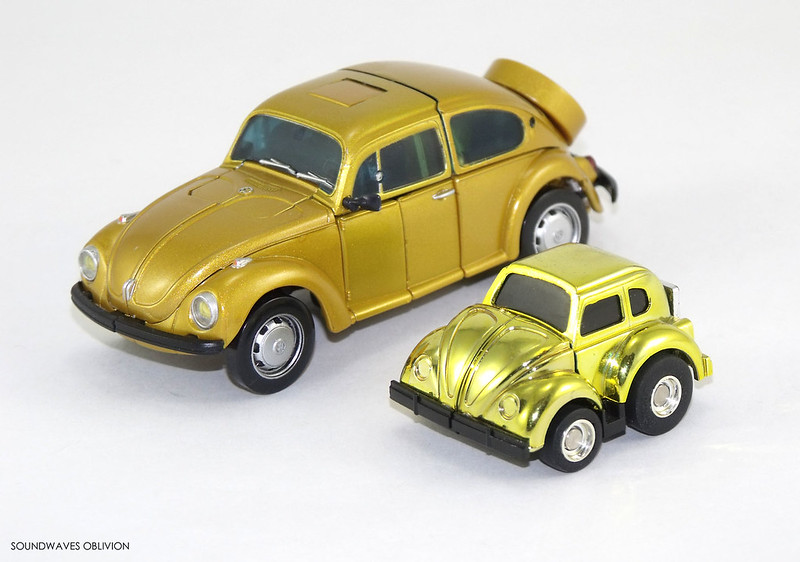 It has been slightly remoulded on the chest / roof section where the main Autobot logo would be. On the original MP-21 there is a moulded Autobot logo, on this one its just a flat surface as the figure comes with additional stickers where you can either opt for a G1 or G2 styled logo. 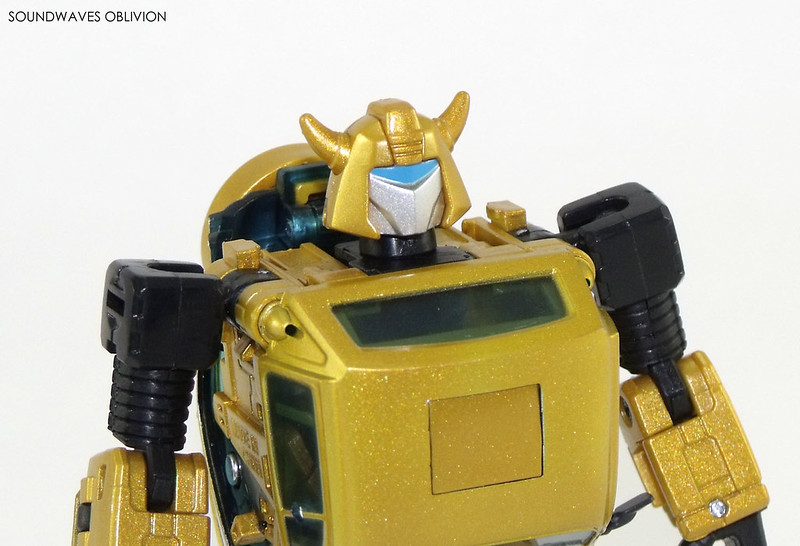 The jet pack Bumble comes with is also from the G1 cartoon episode, Dinobot Island which is a much better addition than the awkward Exo-Suit which came with the original. 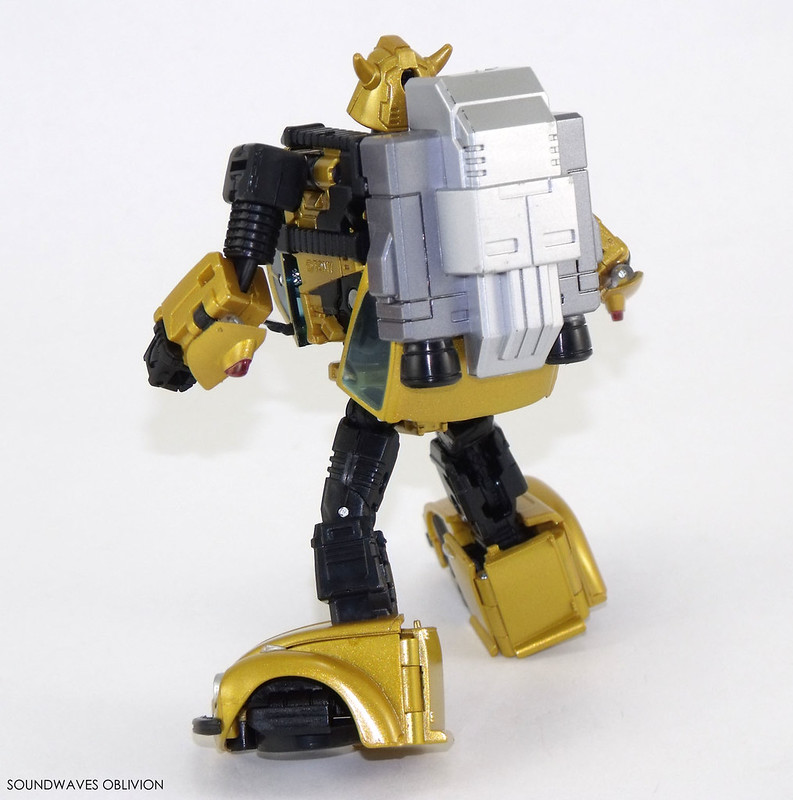 I found the quality of this Bumblebee much better then the first, however my only initial complaint is the faces were far too difficult to remove, certainly for the first time. I had to dismantle the head in order to take the face off. 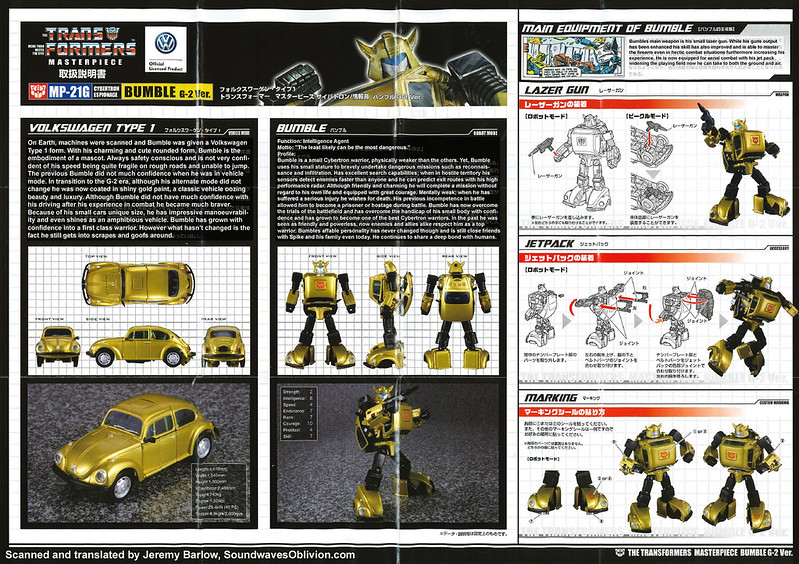 Volkswagen Type 1 Vehicle Mode (Translation from the instruction booklet)
Vehicles were scanned on Earth and Bumble was given a Volkswagen Type 1 form. With his charming and cute rounded form, Bumble is the embodiment of a mascot. Previously Bumble lacked confidence with driving, he hated having to speed, did not drive well on rough roads and was unable to jump. In the G-2 era, although his alternate mode did not physically change, he was now coated in shiny gold paint that makes him look like a luxury classic car. After his experience in combat he gained more confidence driving. He has improved his manoeuvrability as well as underwater driving. Bumble has grown with confidence into a first class warrior. However he can still be careless and often falls from cliff edges. 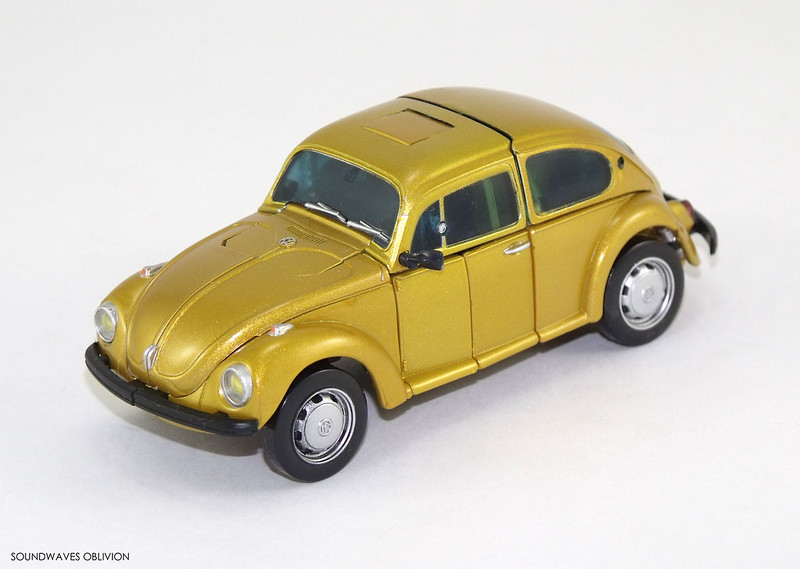 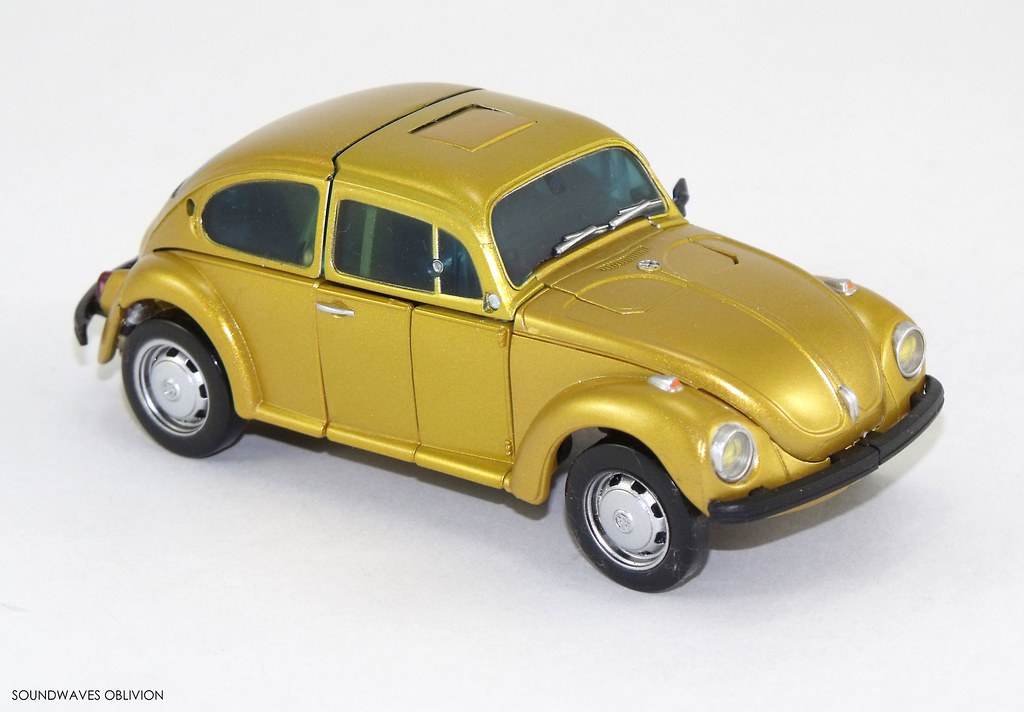 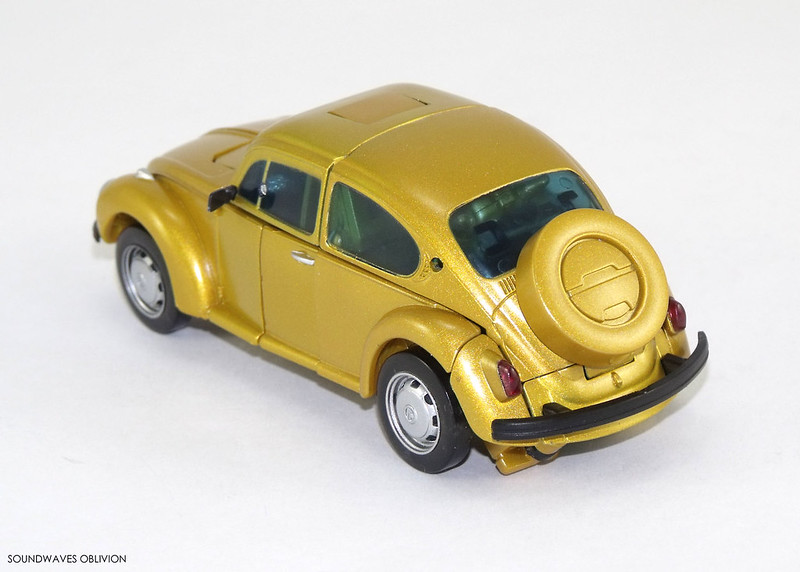 Bumble Robot Mode (Translation from the instruction booklet)
Function: Espionage
Motto: "The least likely can be the most dangerous."
Profile:
Bumble is the smallest and weakest Cybertron warrior. However Bumble uses his small stature to bravely undertake dangerous missions such as reconnaissance and infiltration. Has excellent search capabilities; when in hostile territory his sensors detect enemies faster than anyone and he can guide his team with his high performance radar. Kind and charming he is also courageous and will complete a mission without regard for his own life. He can however lack sound judgement such as when he is seriously injured he wishes to die in his home world. As he lacks physical strength, in battle he was often taken prisoner or as a hostage. After experiencing many battles Bumble has gained more confidence and has grown to become one of the best Cybertron warriors. Those who laughed at his size in the past, enemy or ally, now treat him with respect as a top warrior. Bumble's upbeat and friendly personality has never changed and he still gets on well with the humans and enjoys spending time with Spike and his family. 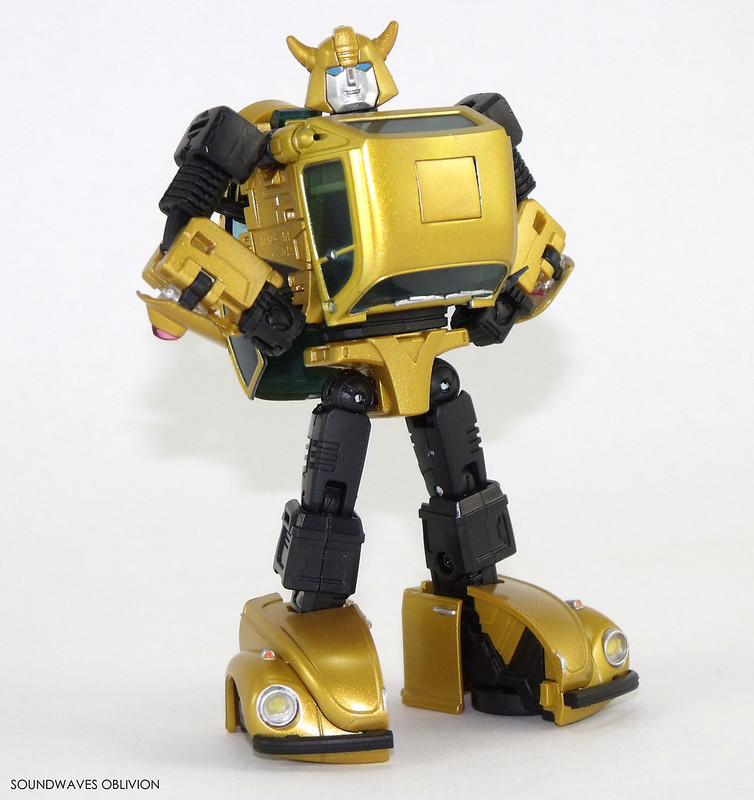 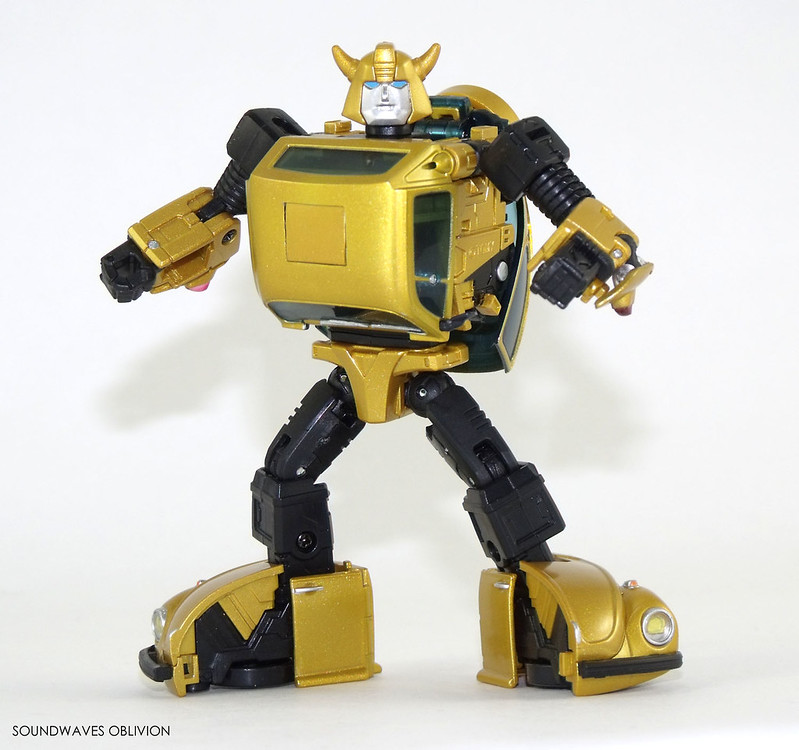 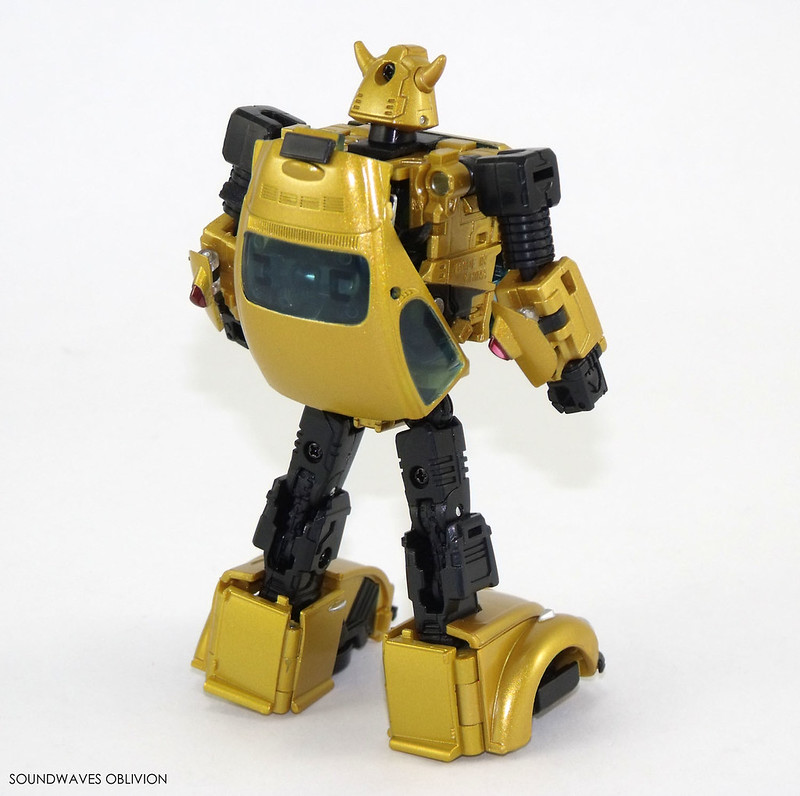 Main Equipment of Bumble (Translation from the instruction booklet)
Bumble’s main weapon is his small laser gun. While his gun has more power, Bumble has also improved his marksmanship and has achieved incredible results in combat. He also has a newly developed jet pack allowing him to take part in aerial battles as well as still being able to take part in battles on land. 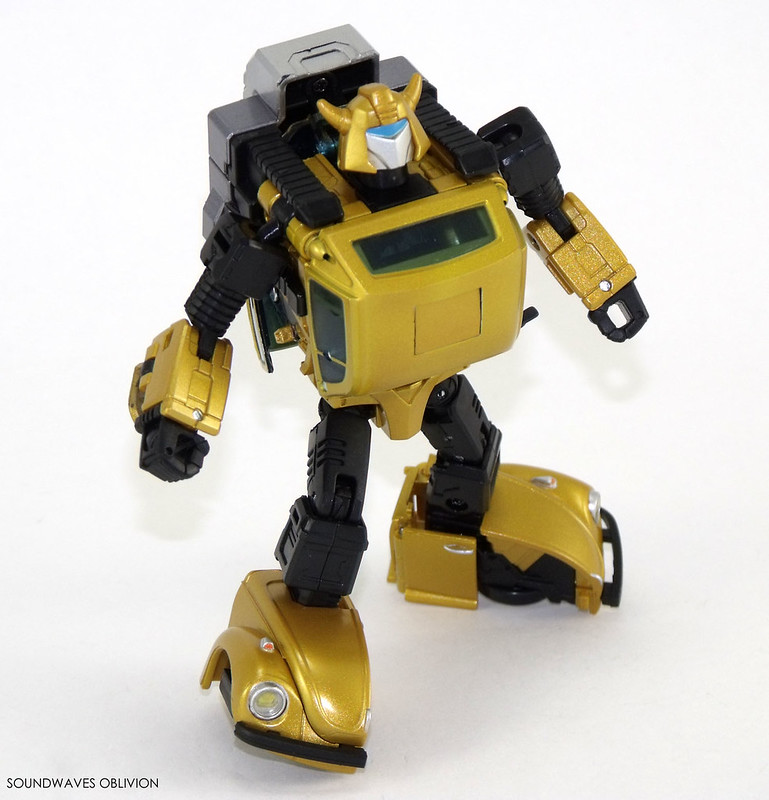 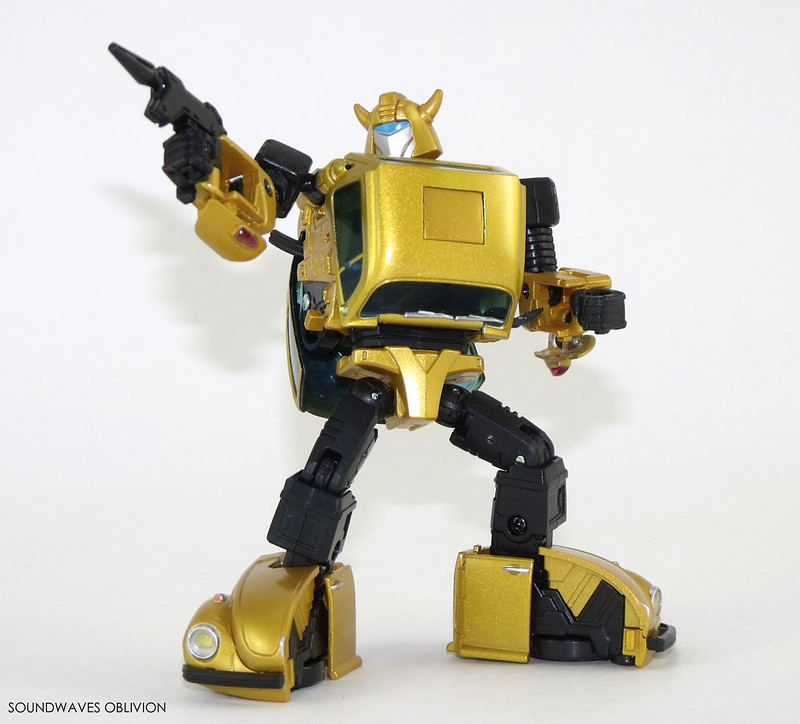 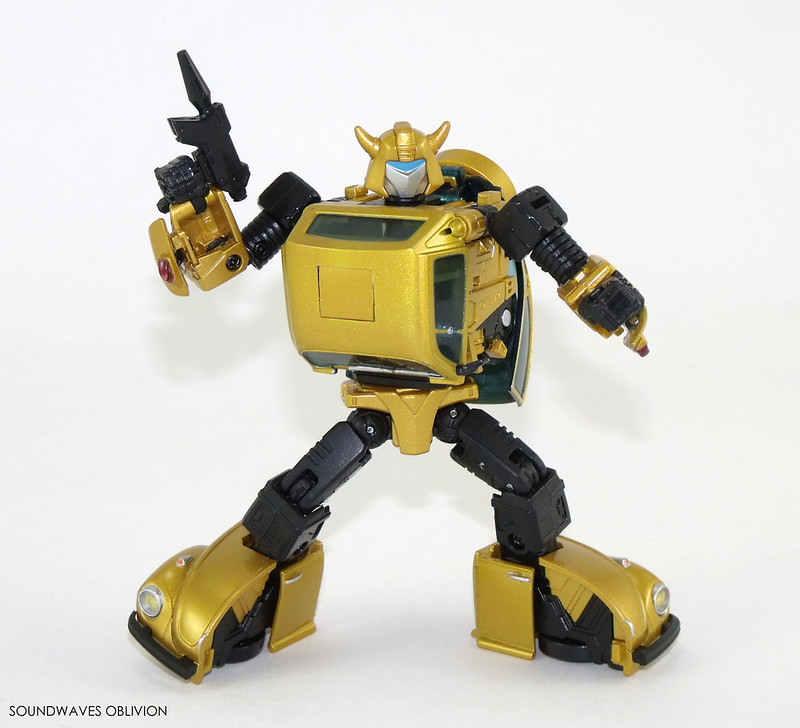 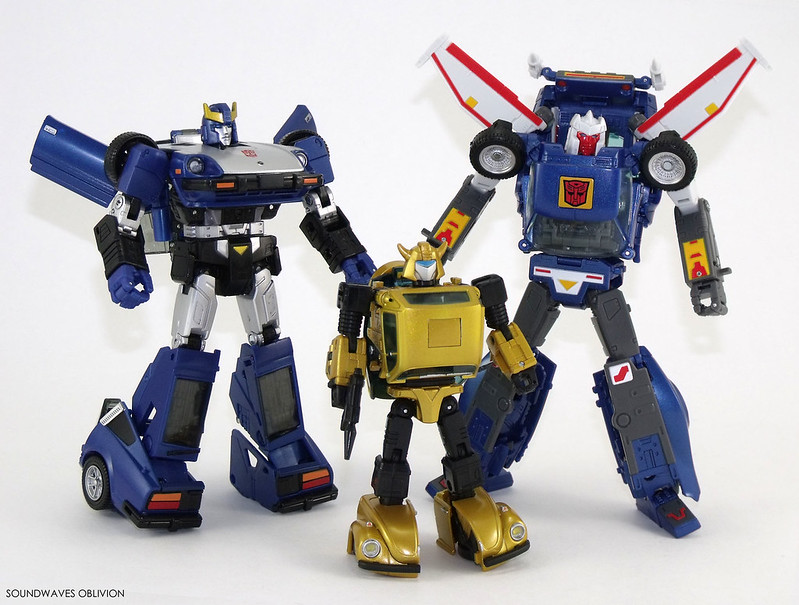