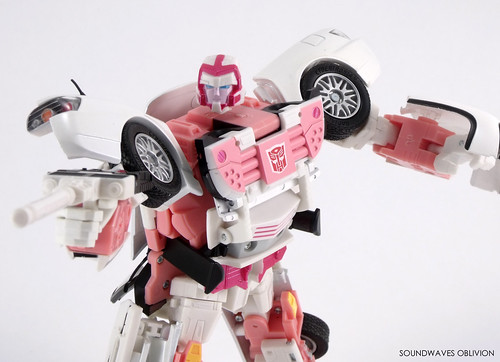 Profile (Translated from the Character Bio)
BT-21 Cybertron Arcee
● Function: Warrior
● Transformation: Honda S2000
● Weapon(s): Dart Storm Gun; Riot Shield
On one hand Arcee is kind hearted and loyal on the other hand she is a ruthless warrior towards her enemies. Her Binaltech body was given to her as an expendable shell so she could participate in high risk experiments for Binaltech research which has now become the subject of a global technological competition. The Binaltech body is tough enough to withstand hostile environments and unforeseen disasters but in an emergency her life core is quickly transferred to a safe environment. In combat, this body is not suited for the psychological games she was inherently good at but its resilience is extremely useful. Her main weapon, the Dart Storm Gun, is a powerful firearm which can continuously fire rounds of bullets from the long barrel by using electronic ignition.
STR...6; INT...8; SPD...8; END...9; RNK...5; CRG...8; FBL...9; SKL...7; TTL…60 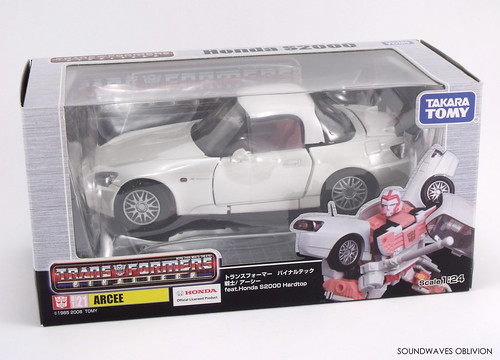 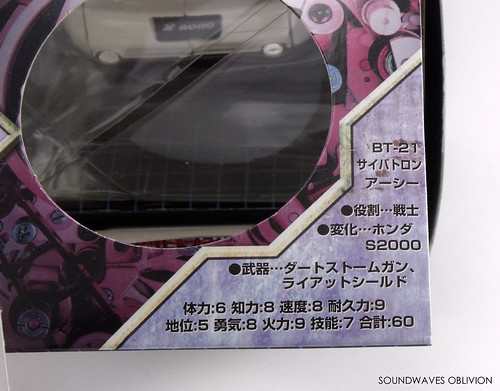 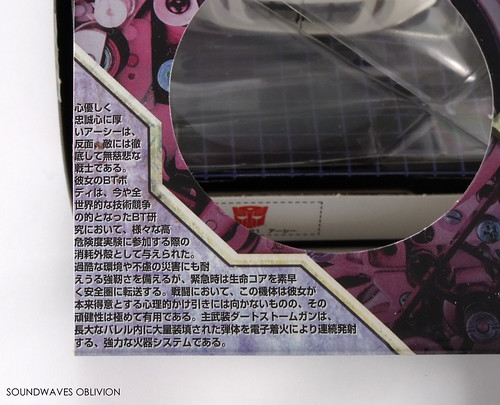 In January 2005, an Alternators figure was revealed which was a yellow Honda S2000 Aero, a redeco & remould of Alternators Windcharger (aka Binaltech Overdrive) who was released December 2004. Initially thought to be the Stunticon Drag Strip which would have made sense with the prior release of Dead End, it ended up being a brand new character called Decepticharge. In September 2005 Decepticharge was released in the standard red alternators box. Decepticharge would be re-released in 2007 in the updated bubble styled packaging. 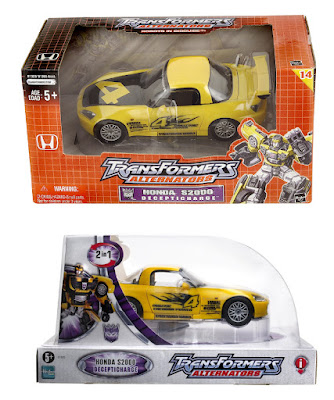 Incidentally it was in this guide where it was revealed that Decepticharge's headsculpt was going to be used for the Ford Mustang and this was going to be Windcharger. The plan however was changed to release Wheeljack instead. 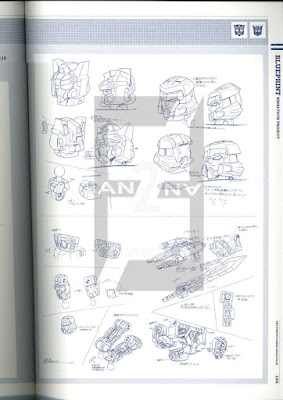 In April 2005 it was revealed Decepticharge would be released in the Binaltech line and in early June 2005 listings for "BT-16 Wildrider feat Honda S2000 Aero Style" would appear in online stores. Wildrider featured a new silver/grey colour scheme. The name Wildrider was quickly changed because of trademark problems with Bandai's Kamen Rider series so Takara renamed the character as Black Widow, the Beast Wars character.
However in August 2005 it was announced that Black Widow would be postponed as Takara thought too many Binaltech redecos were getting released and opted to release it in a separate line like Binaltech Asterisk. Black Widow never saw this release until March 2008 where BT-21 Arcee was revealed alongside Convoy BT-22. The S2000 Aero was finally released in July 2008. 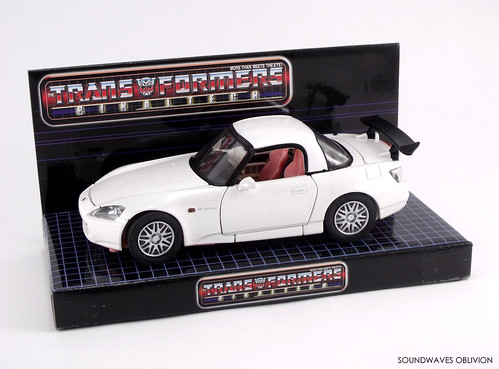 The Binaltech series had effectively ended in 2005 other than two exclusive releases in 2007 however four final figures, Arcee being one of these, were released in 2008 with a four part story to introduce the new Alternity series. 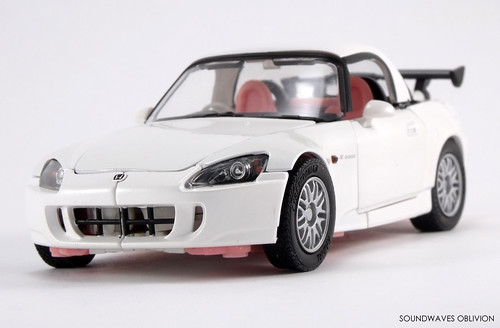 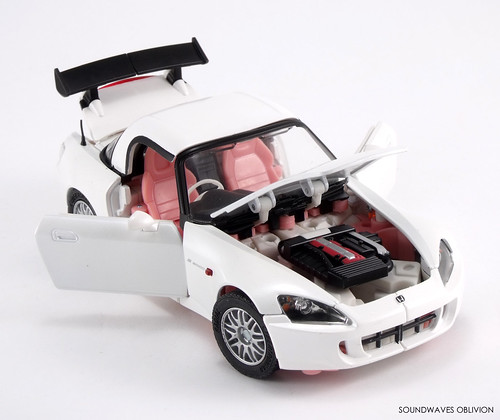 This figure does not scream Arcee, the car mode is white but the seats are pink. Speaking of the interior, it is incredibly detailed. The bonnet, boot and doors all open and as an extra feature you can remove the roof for the convertible look. 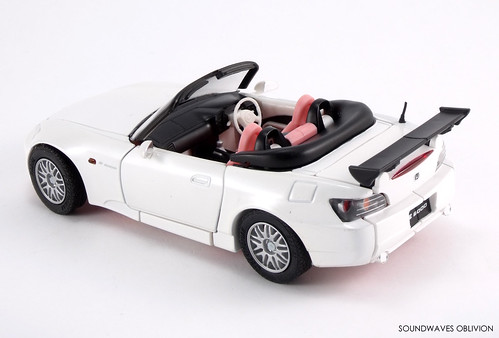 Transformation is easy enough although I did have a bit of trouble getting the car doors to stay flat against the legs. 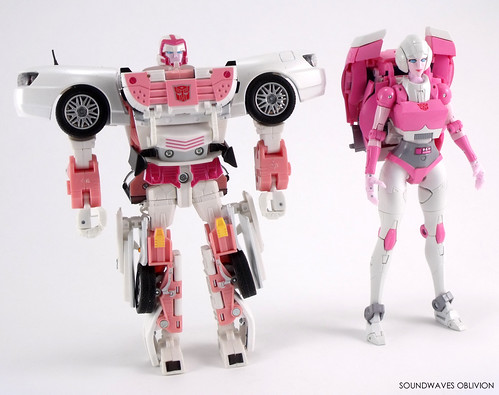 In robot mode there is a lot more pink colouring but again unless you know it doesn't look like Arcee. The wide shoulders do give off an 80's vibe for big shoulder pads. The shoulders also hinder articulation slightly. The engine transforms into a weapon and the drive shaft becomes the gun barrel. The hard top roof becomes a shield which you can plug into the forearm. 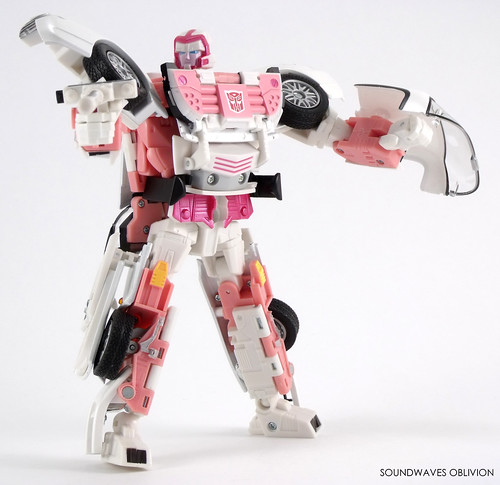 Translated from the rear of the box:- 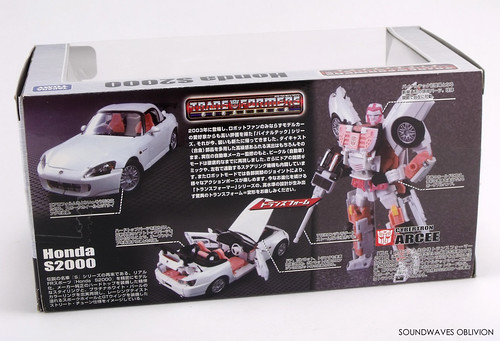 Transformers Binaltech
Introduced in 2003, the “Binaltech” series was highly acclaimed, not only by Transformers fans but also by model car enthusiasts. Now it has returned, take a look. The premium presentation with die-cast (metal) parts have of course been retained. Under the supervision of the car manufacturers, the vehicle (automobile) mode has been thoroughly reproduced. It also features opening and closing doors and a steering mechanism which is linked with the front left and right wheels. The articulation in robot mode allows you to enjoy various action poses. Enjoy the amazing transformations created by the sophisticated design of the ever evolving “Transformers” series.
Honda S2000
An accurate model of the real FR sports car, the second instalment of the famous “S” series. It faithfully reproduces the bold styling and comes with the hardtop and platinum white pearl colouring. This is the street-tuned version with racing style spoked wheels and a GT wing.

Cybertron Arcee
In “Fight! Super Robot Lifeform Transformers 2010” was a female warrior who excelled at strategically exploiting the enemies psyche. Now she is available in the Binaltech series. The impressive bright pink robot mode reveals a spectacular transformation into the sporty hardtop version of the S2000.
The spoked wheels and GT wing enhance the aerodynamic form.
The open roof can be replicated by removing the hardtop roof and replacing it with the soft top part showing the roof in its stored state.
The VTEC engine transforms into a Dart Storm Gun.
The doors, bonnet and boot can be opened and closed like the real car. The engine under the bonnet becomes a weapon for the robot.
In addition to holding the weapon, the hands are articulated and can be used to create a variety of expressions.
The new head sculpt has never been seen in the Binaltech series. It is articulated with the use of a ball joint. 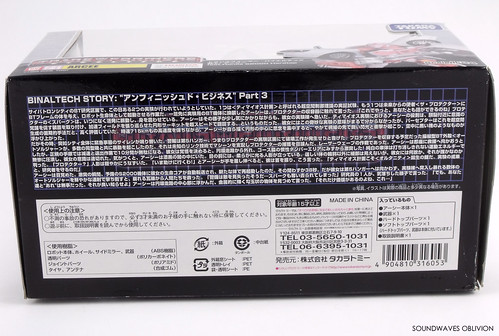 Two experiments were about to take place in the Binaltech research facility in Cybertron City that day. One was a demonstration of the "Timaeus Project", an experiment involving hyperspace control theory. The other was to give a Binaltech body to “The Protector”, a messenger from the future, and activate it as a robotic lifeform.

Arcee, who had already been converted into a Binaltech body for the experiment ahead of the others, touched the Protector's containment vessel and said, "Now I can finally talk with you." The Protector's spark started pulsing vigorously and began to shake. Arcee was a little concerned as she hurried to her laboratory.
Arcee's role in the Timaeus experiment was to wear a device near her brain that would awaken her consciousness and to drive at super-speed around a circular track lined with an acceleration field. She had no idea of the significance of this strange experiment, but Perceptor praised it as a groundbreaking method of hyperspace generation.
As Arcee maintained her speed of 715 km/h, she focused her thoughts and consciousness on the centre of the ring that she was driving through. Suddenly there was a flash and bang and a black mass appeared in the air.

Emergency sirens sounded throughout the entire city. The alarm announced that Hanger 5, the Protectors experimental area, had been sabotaged. The controlled Binaltech bodies "Autosoldiers", which were supposed to house the Protectors, along with other similar machines had mutinied. This was Laserwave’s plan to capture the Protector by using an unknown link technology to control the Autosoldiers remotely.

Arcee headed to the rescue, but slowing down meant she would have to waste 10 minutes. Determined she raced off the track crashing into the inertial damper area on the side of the track. Her pure white car body was crushed by kinetic energy and she lost consciousness.

When Arcee came to, she found herself in a jet-black void. A soft glowing figure stood before her. She could see no details other than the outline of a muscular body, but somehow she knew who this was. “Protector?” The figure nodded. “I’m here to help you!” Arcee held out her hand but he shook his head. “The Timaeus Project is key to the creation of “Alternity”. Protect the researchers and the results of the experiment.”

Arcee came back online. At the moment of the collision her life core was automatically transferred to a spare S2000 body and reactivated. The entire process only took 38 seconds. She did not head to Hanger 5 and instead rushed to the laboratory knocking down several rampaging Auto-Soldiers with a barrage of fire and saved the humans from falling debris.

“The enemy has evaded the guards and the Spark has been taken.” one of the researchers said dejectedly. “But the good news is that both you and the Spark are safe” Arcee replied, staring at the shiny metallic sphere floating in the centre of the track. “That's worth something isn’t it?” 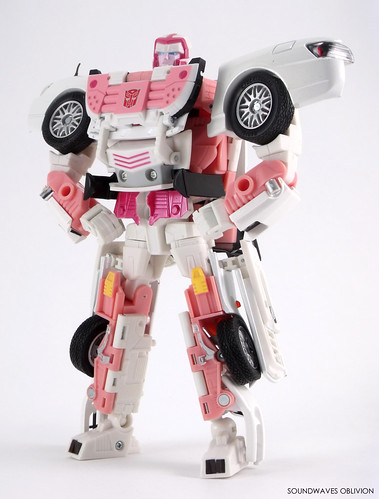